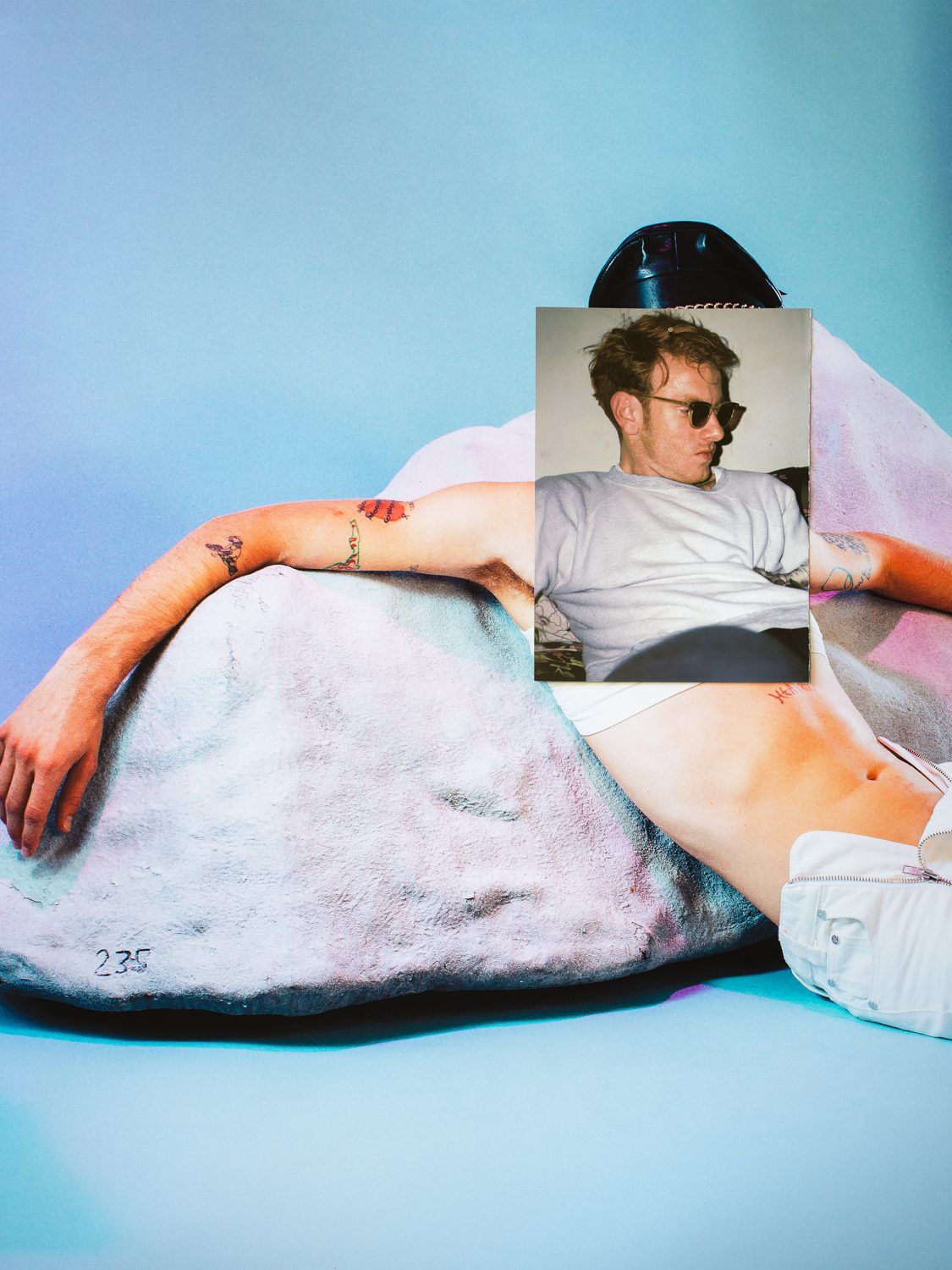 Jack Pierson, VARIATION 1 WITH SELF, 2020. © Jack Pierson. Courtesy of the artist and Aurel Scheibler. 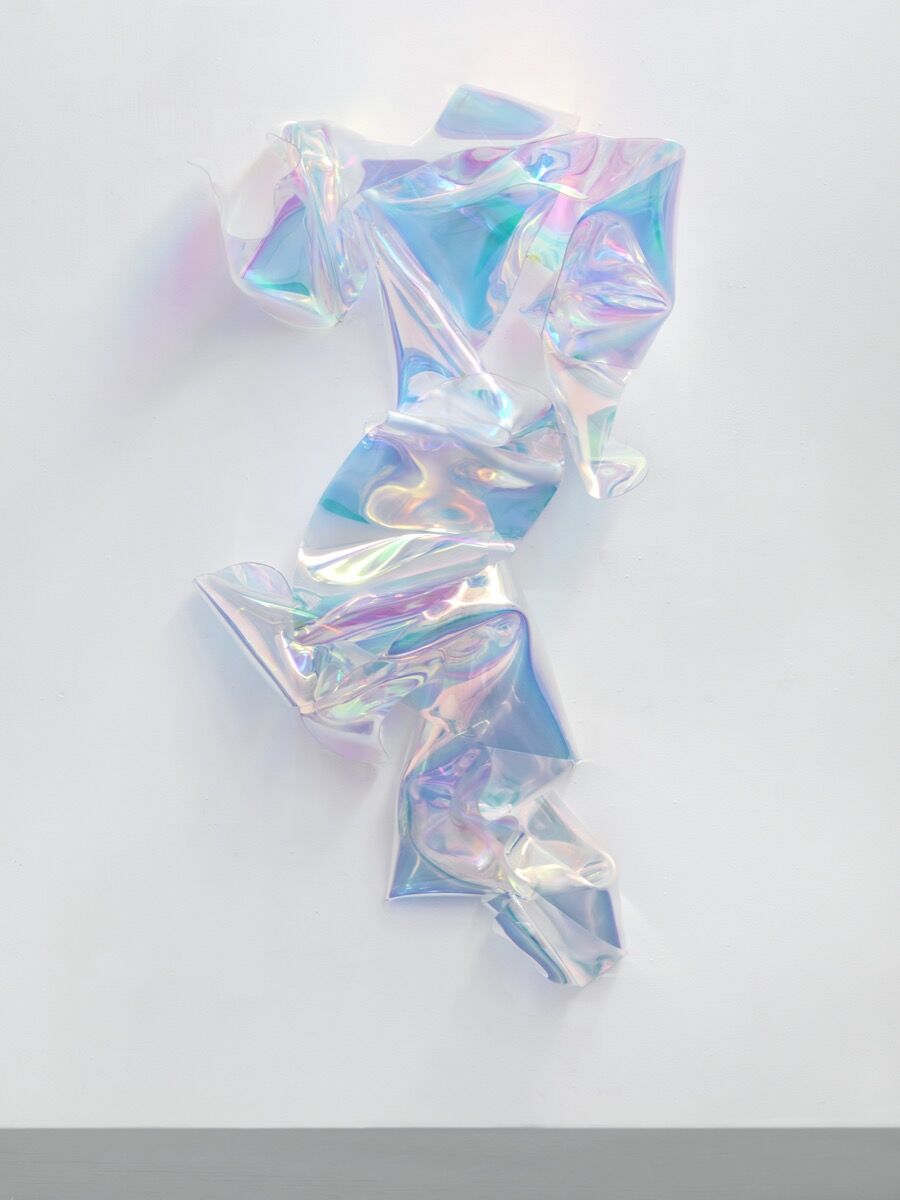 While many of Berlin’s museums and galleries began to reopen long before its (rescheduled) Gallery Weekend, the past few days had the feeling of starting a new chapter. Spaces like Galerie Thomas Schulte required your information for contact tracing before entering into the space; König Galerie had a socially distanced line stretching along the sidewalk. Hand sanitizer was ubiquitous. Fittingly, the one show I encountered wherein a woman refused to wear a mask was titled “Ideas of Utopia” (at Niels Borch Jensen).
For the most part, however, each of the shows at Gallery Weekend Berlin’s nearly 50 participating galleries could be read in a new light due to the events of the past six months. In some cases, the artwork was made during and in direct response to the lockdown. Other works were made decades before, but resonate with the present. Perhaps the best metaphor for the weekend on the whole is a show that didn’t take place at a gallery: Haus der Kulturen der Welt’s presentation of Aby Warburg’s Bilderatlas Mnemosyne (1925–29). Warburg’s 63 panels combine and contrast images of different eras and contexts, finding common ground between them like a game of visual etymology.
Warburg’s influence seems to hang over the shows currently on view, creating connections in a time where distance is still a necessity. Here are five standouts from the 2020 edition of Gallery Weekend Berlin. 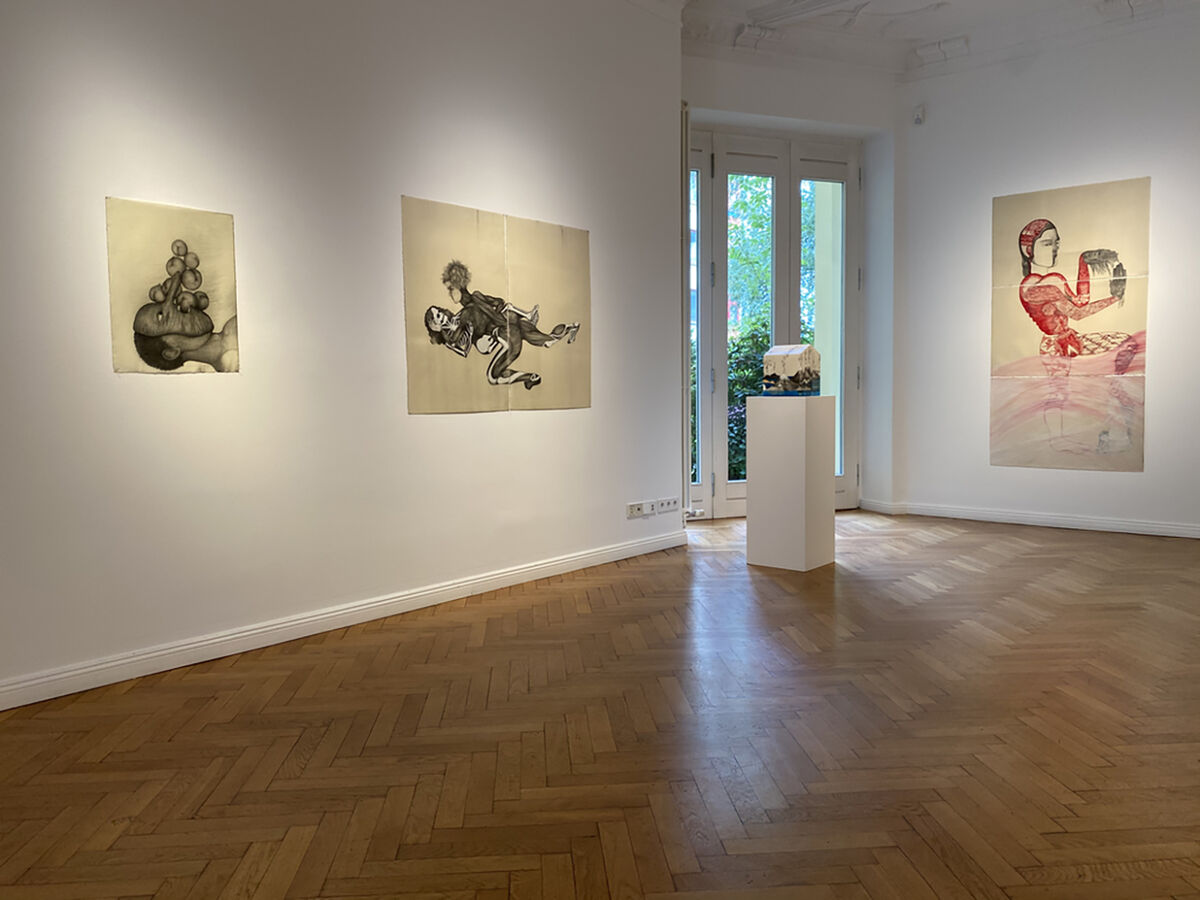 Sandra Vásquez de la Horra
’s works can be read as maledictions, evidence against the atrocities of humanity informed in part by her childhood in Pinochet’s Chile. In this set of recent works on view at Galerie Michael Haas, however, the more I stared at the faces of her subjects—overgrown cherubs still trying to squeeze into their childhood skins—I was also reminded of Star Trek (stay with me on this). In one of the show’s first episodes, the crew of the USS Enterprise land on a planet run by “onlies,” children who have managed to live for over 300 years by aging only one month for every century, but this also leaves their minds and bodies in a perpetual state of childhood. A mysterious illness will kill each of them as they hit puberty. From a governing standpoint, this goes exactly as one would expect. And yet, in the waning months of 2020, in the face of another, and in some ways equally stymying illness, it’s tempting to wonder how many onlies are at the helm of political power.

El Viaje Imaginario
View Slideshow
6 Images
Advertisement
“We are at a time when there are greater challenges,” Vásquez de la Horra wrote via email, but she is also optimistic—provided we can “stick together and…show solidarity with other countries, with children, with women.” This, too, shines in her work with echoes of
Hilma af Klint
and even the mystical later works of composer Richard Wagner. One diptych combining the technicolor spectrum of af Klint with the mythos and rituals of Wagner, La Primera Mujer (2020),shows a nude lying back as if in labor. Her left breast appears to cast a light, an aura of areolae in orange, red, violet, and blue. “It is important to remain sensitive,” she added. 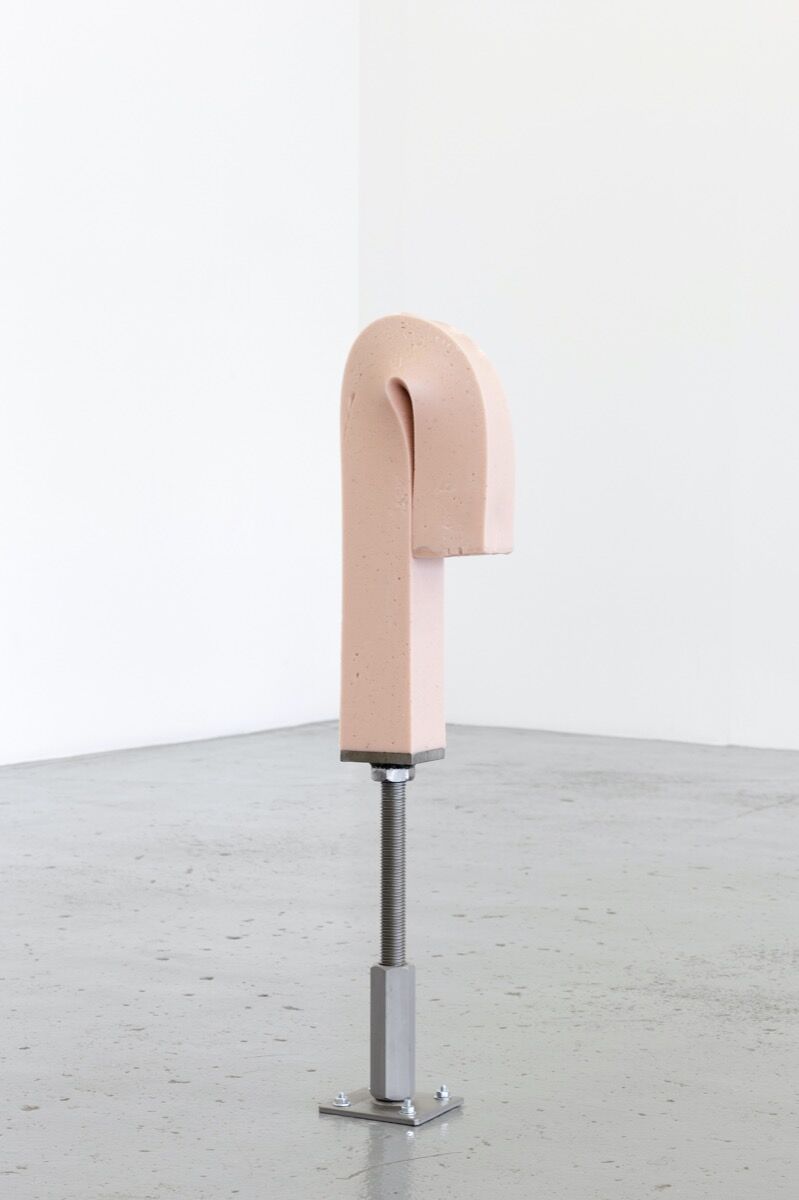 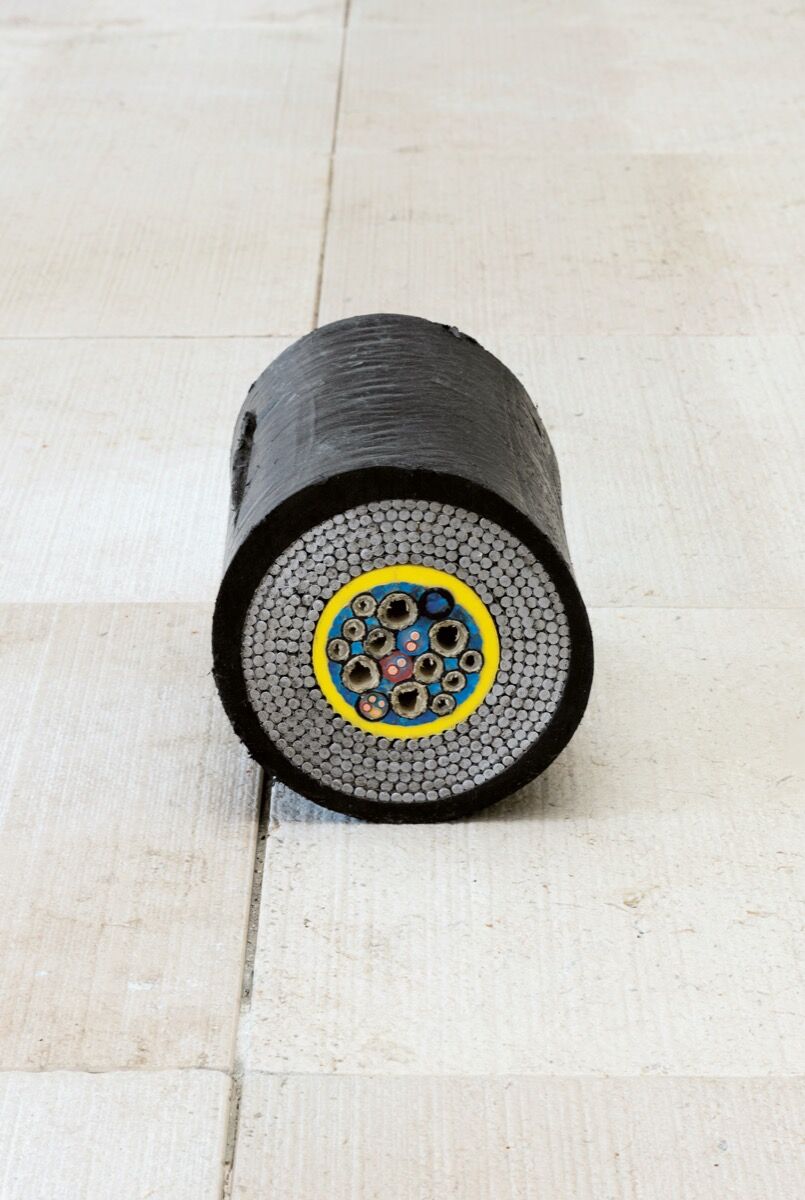 If you’re going to make a day out of visiting Berlin’s newly reopened galleries, I highly recommend bookending your stops with
Nina Canell
’s double bill at Barbara Wien and Daniel Marzona. At the very least, consider making the three-kilometer trek from one space to the other by foot. Taking its name from the descriptions of Morse code signals, “Dits Dahs” interrogates the notion of structural magic. Much like Morse, can one object originate in one place, but be transported to another?
Through a series of ersatz wires hooked up to generators, Canell creates her own sonic codes. In Daniel Marzona’s space near Friedrichstrasse (a point in the history of divided Berlin that served as its own portal), five of these wires vibrate at different frequencies, aided and hindered by objects like pistachio shells, press-on nails, tiny bolts, pennies, and pull tabs. One jingles, another chatters, still another resonates at a low purr. Where are the impulses triggered by the generator sent? Barbara Wien is home to four additional cables, some bearing similar trappings, others kitted out with twigs, string, tinsel, and receipts. Each carries its own name, a sort of NATO phonetic alphabet that relies on Negative Hair and Semi-automated Skink Tail (both 2020) in place of “Roger” and “Wilco.”
Barbara Wien also houses several more pieces as part of the series including works incorporating organic clay (Gurgler and Gurglers,both 2020), rain drains, or fiber-optic board cabinet doors. Like any
John Cage
work, the beauty of Canell’s pieces is experienced in person, in the present moment. 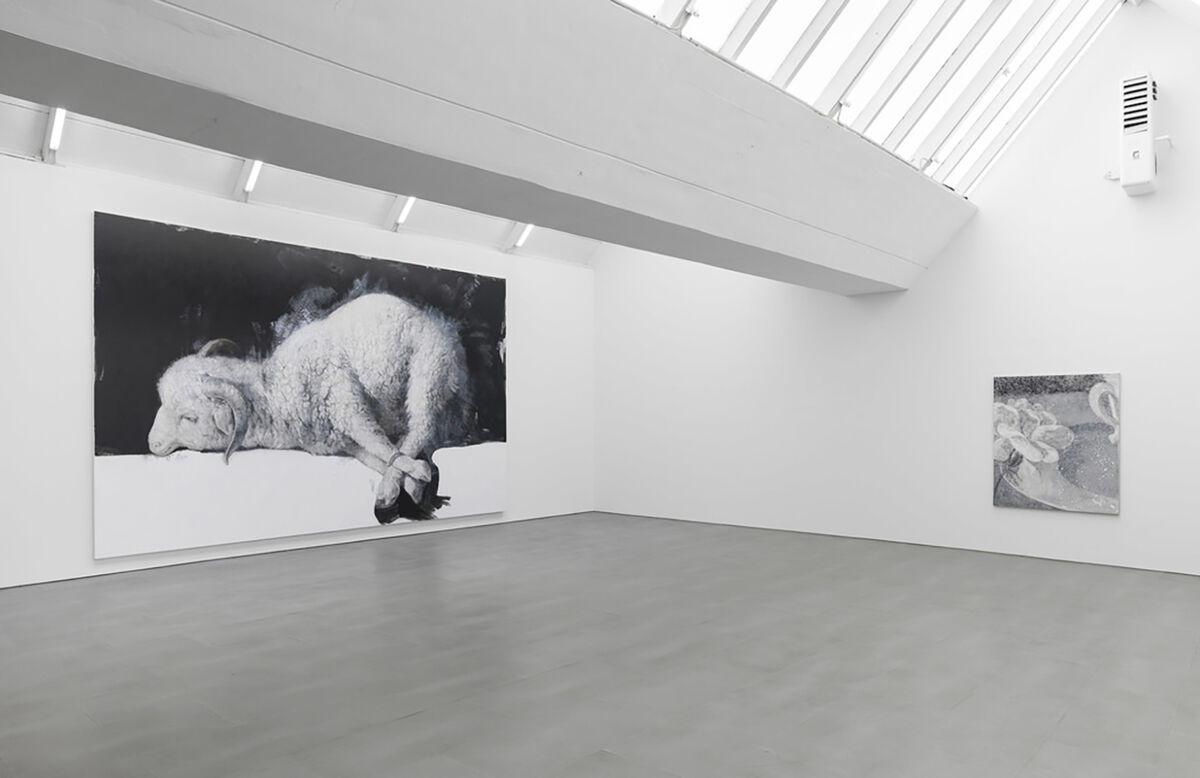 After a season spent mainly indoors, there’s something intensely satisfying about being in a large room with a giant painting. Serbian-born
Jelena Bulajić
delivers on that in carlier | gebauer’s airy space with the 13-by-21-foot Untitled (After Zurbaran) (2020). Like Canell, Bulajić is interested in transport, but where Canell revolves around space, Bulajić is centered on time. Untitled (After Zurbaran) shows a live lamb, its feet bound, with layers of meticulous detail. The initial image, reminiscent of the sort of fresco that would be used to adorn the recording of a Bach mass, is aged over with paint drops that hint at
Jackson Pollock
, but in reality are made one at a time with painstaking precision. 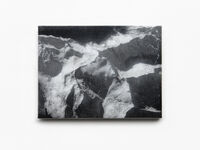 Jelena Bulajić
View Slideshow
6 Images
In lieu of transporting the viewer elsewhere (echoing the
Antoni Tàpies
quote used in the press release: “To achieve contact with reality is not to transport oneself elsewhere, it is not transcendence but thorough immersion in one’s surroundings”), Bulajić’s works—both large scale and small—bring the viewer into the present moment. More than that, as each detail reveals itself through close scrutiny, they immerse the viewer in reality. The grounded sensation is a much welcome respite. 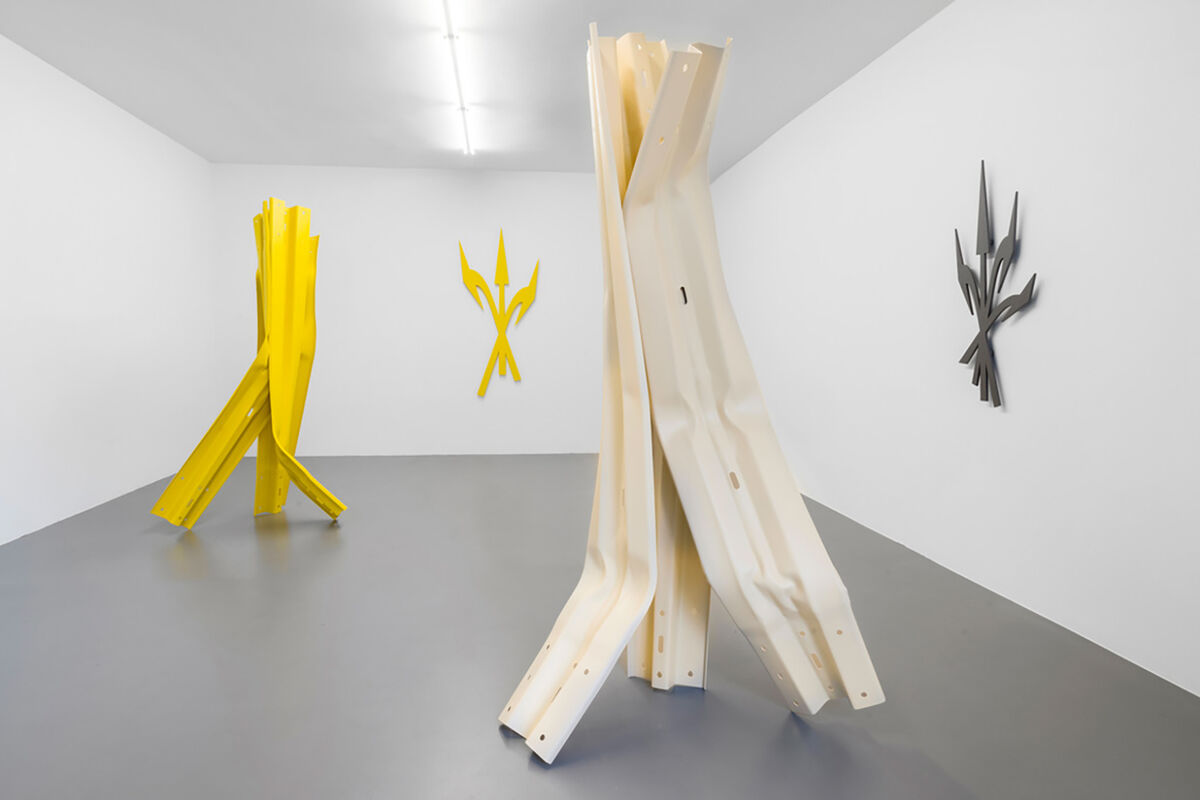 Both of Buchmann Galerie’s shows were more deliberately shaped by Berlin’s COVID-19 lockdown. For British artist
Clare Woods
, the sensory experience of being in lockdown (and the buildup to that period) is rendered in paintings that aren’t too far off from
Edvard Munch
or
Federico Fellini
at their trippiest.
A few blocks down Charlottenstrasse, in the Buchmann Box, are two of the latest installments of
Bettina Pousttchi
’s “Vertical Highways” series, also shown as part of her earlier show at the Berlinische Galerie (which was also interrupted by COVID-19). The familiar materials of roadside barriers, in Pousttchi’s hands, are reworked and reconfigured, standing vertically and twisting around and against one another. In this way, they begin to resemble the human bodies whose movements they regulate in real life. The two sculptures on view were mid-creation when the pandemic kept Pousttchi from going to her studio to finish them. 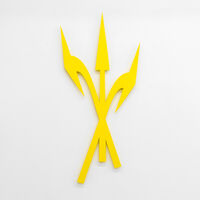 Vertical Highways
View Slideshow
4 Images
In that time, everyone became more aware of how movement is regulated and restricted, catching up a bit with Pousttchi. For more than a decade, the artist has been interested in the invisible hands of public spaces and how movement may be restricted due to security measures, population control, or any number of mitigating factors—including a pandemic. “It kind of confirms your vision,” she said of the newfound resonance of her work, quickly adding that this is a double-edged sword. “[In this case] you don’t want the world to confirm your vision! You would rather be wrong than right.”
While Pousttchi is tired of pessimism and looking forward to Berlin reopening more once the pandemic is over, her work (and Canell’s) can be seen as part of the Berghain exhibition “Studio Berlin,” on view until the space can reopen as a nightclub. 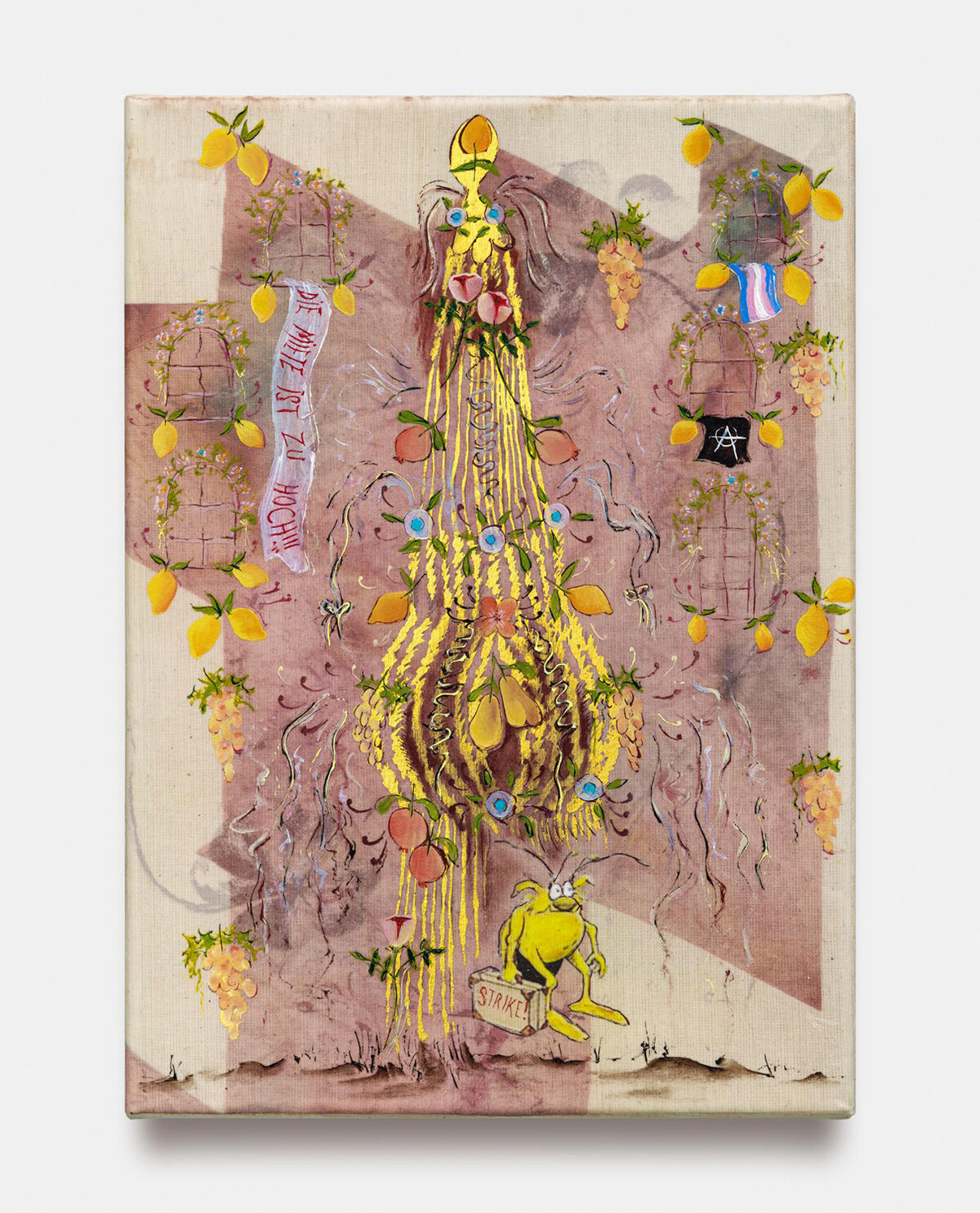 There were enough works on the agenda for Gallery Weekend Berlin that reaffirmed my ambivalence towards the cult of irony:
Caspar David Friedrich
–inspired canvases dotted with knockoff Disney characters, oil paintings of objects that seem too earnestly made to serve as commentaries on ownership (to steal a bit from John Berger). But
Elif Saydam
’s show at Tanya Leighton seems to avoid this pratfall, artfully and earnestly. The Turkish-Canadian artist, now based in Berlin, captures the conflation—and, at times, conflict—of identities in a set of oil paintings, each roughly the size of a sheet of paper.
Saydam’s works resemble 16th-century Ottoman miniatures. Twenty three–karat gold highlights shapes like the Hand of Fatima; the predominantly blush-and-rose palette calls to mind sun-baked rooftops along the Bosphorus. But look more closely and the identities become far more layered and nuanced. There are German-language banners protesting rent increases and the Trans Pride flag. That Saydam was born in 1985 is also woven in with mood-ring charts and stickers that will be instantly recognizable to anyone else who started grade school in the early ’90s.
Stare too long, however, and a sense of chaos emerges, hinting at mid-’90s crankiness. “Cranky” is a word Saydam appreciates, nodding to its use to describe children, “especially those moments of exhaustion that transform and spill into frenetic energy and lead to tears, which is quite a particular adjective to use to approach a series of paintings,” the artist said. It’s also a gut feeling many of us can appreciate at this moment.
Olivia Giovetti
Related Stories