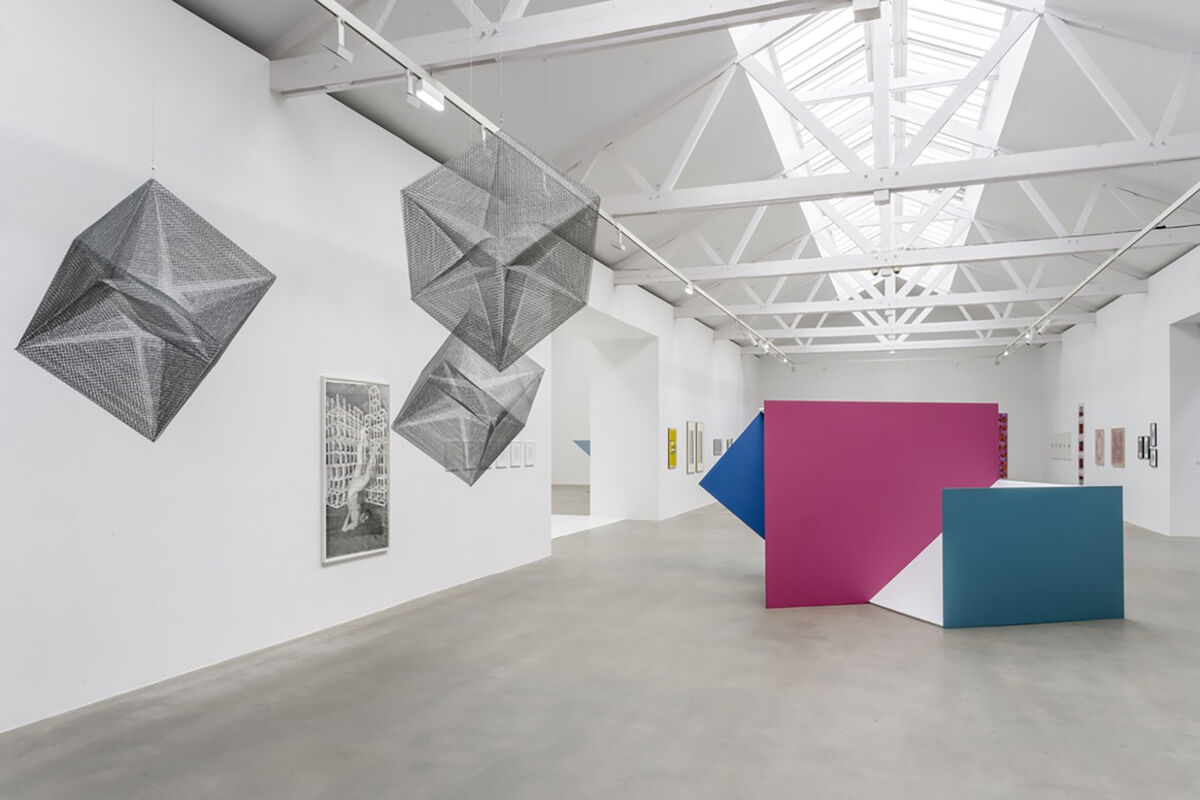 The seventh edition of Paris Gallery Weekend took place this past weekend, a month and a half later than in previous years due to the COVID-19 pandemic. Sixty participating galleries presenting 72 exhibitions are spread across four neighborhoods or, one could say, three temporalities. Saint-Germain-des-Prés, the Marais, the 8th arrondissement, and Pantin-Romainville symbolically represent the past, present, and future of the Parisian art market.
Before and after World War II, Saint-Germain was the stomping grounds for artists and intellectuals: the likes of
Pablo Picasso
,
Fernand Léger
, and the activist political-cultural couples de Beauvoir–Sartre and Triolet-Aragon. By the 1950s, it was the theater for daring experiments in abstract, kinetic, and optical art in spaces run by intrepid female gallerists Iris Clert and Denise René. Today, the Marais is the hip epicenter of Paris’s gallery scene, which explains why four of the seven proposed gallery weekend crawls take place here. Home to numerous boutiques and cafés as well as the city’s historic LGBTQI+ neighborhood, the Marais has come a long way from the slum it was at the beginning of the 20th century. In fact, it was so insalubrious that in the 1920s, Le Corbusier proposed bulldozing and replacing it with 18 gigantic skyscrapers capable of housing 3 million people. 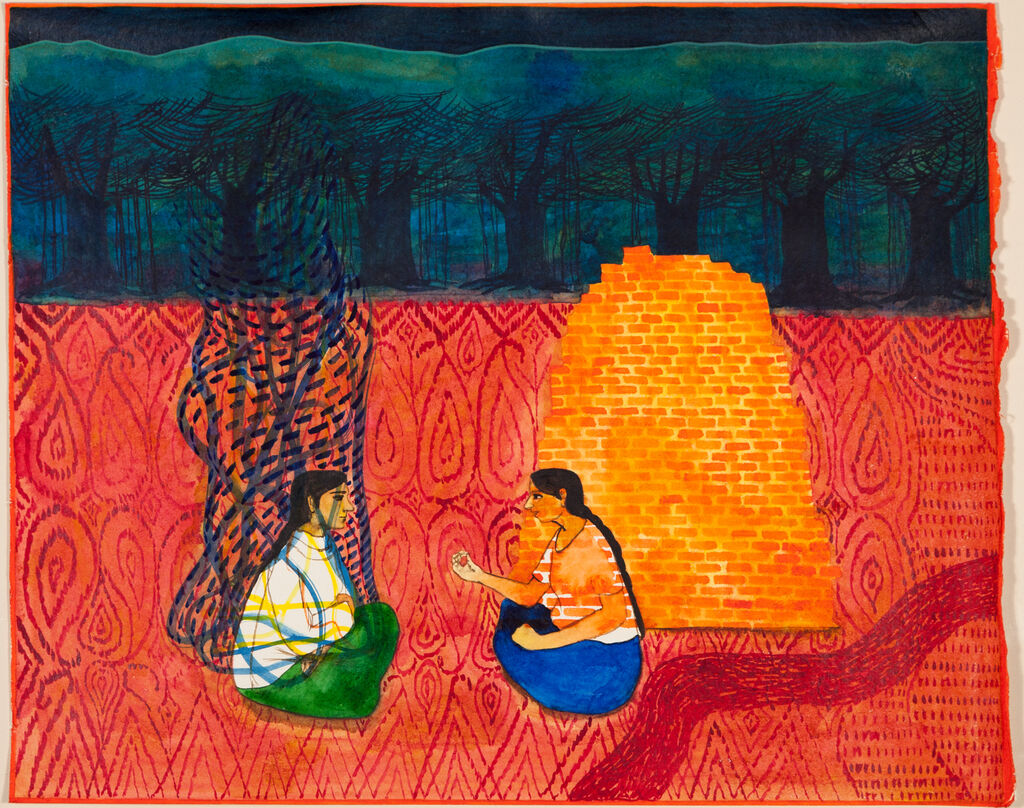 Karishma D'Souza
Clarity conversations, 2018
Xippas
In addition to Saint-Germain and the Marais—one a former bastion of French art-world prestige, the other its current seat of power—are two neighborhoods that have only recently come to be known for their cultural offerings. Situated almost on polar opposite ends of the city, the super-wealthy 8th arrondissement and the suburban twin towns of Romainville and Pantin (which have been absorbed by the city’s expansive sprawl) propose two radically different conceptions of what the future of Paris’s art scene might look like.
Apart from a pilgrimage through space and time, the seventh edition of Paris Gallery Weekend is also an opportunity for the city’s various cultural institutions, large and small, to show solidarity in the wake of the financial and moral shock of the recent health crisis and to imagine how the former world capital of art and culture can reinvent itself going forward.
Here, we share a look at five of the most compelling exhibitions from this year’s event. 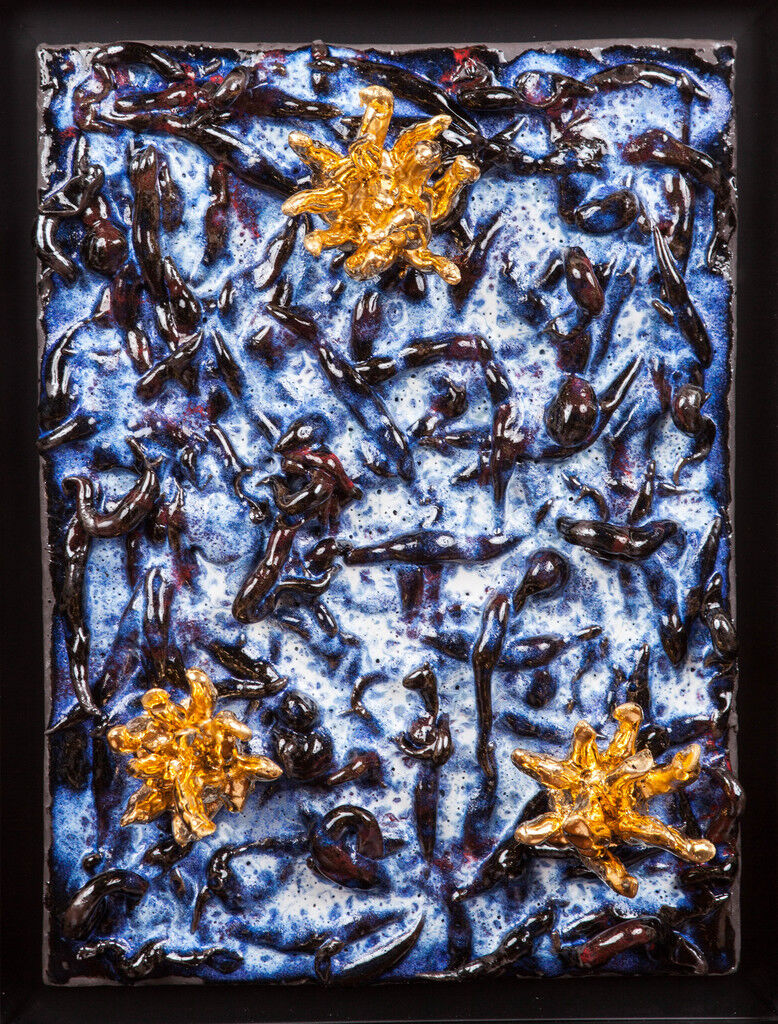 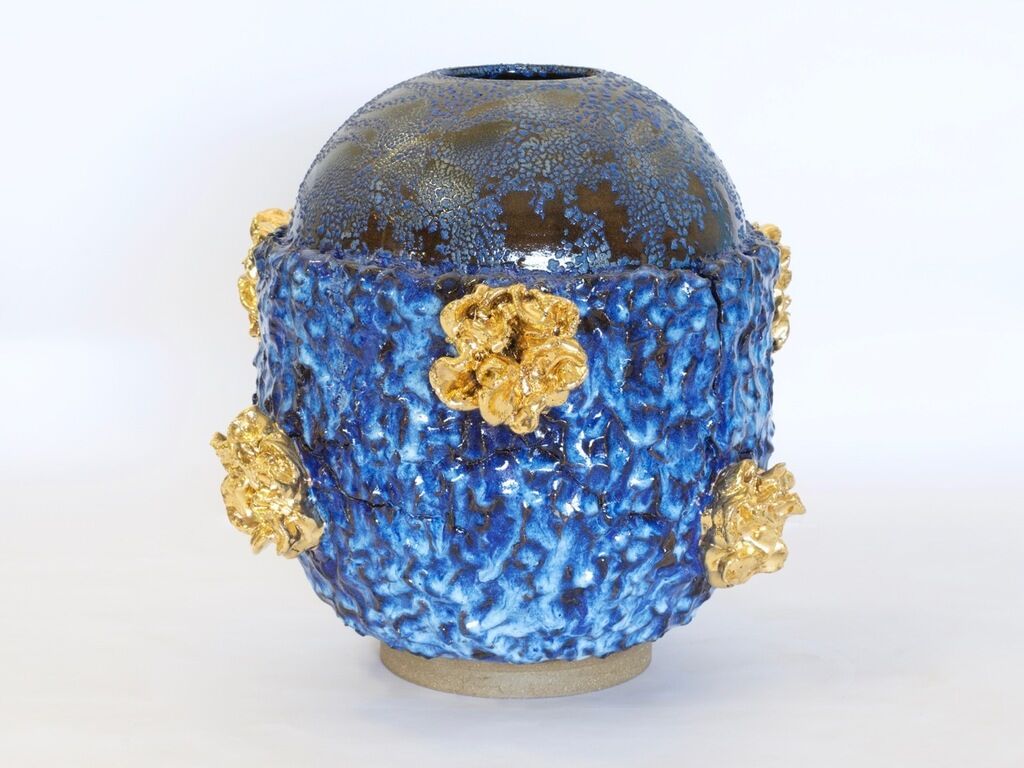 King Houndekpinkou
Cavilux bleu et or - Chrysanthème, 2020
VALLOIS
Advertisement
For his fourth exhibition at Galerie Vallois, the Franco-Beninese ceramicist
King Houndekpinkou
presents around 30 otherworldly sculptural vessels. Covered in spikes, tubes, and reflective glazes—gold, acidic green, sapphire blue, and candy pink—works like Cavilux rose et or and Gravité : point d’ancrage, rythmes et cris (both 2020) represent the hybridization of ancient and modern pottery techniques originating from Japan and western sub-Saharan Africa. Houndekpinkou also mixes clays from Asia, Europe, and Africa, furthering the sense that his works are physical embodiments of cultural cross-fertilization. His pieces are powerful, modern refutations of the stereotypical notion of African arts and culture as being “fixed” in timeless ancestral traditions. 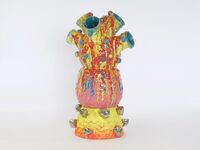 Gravité
View Slideshow
6 Images
Houndekpinkou’s approach is at once original, innovative, and yet also somehow (perhaps though his use of bright colors and abstract geometry) connected to a certain “tradition of rupture”—what Francophile Mexican poet Octavio Paz once described as the defining characteristic of modernism.
Explore King Houndekpinkou’s “Gravité” on Artsy. 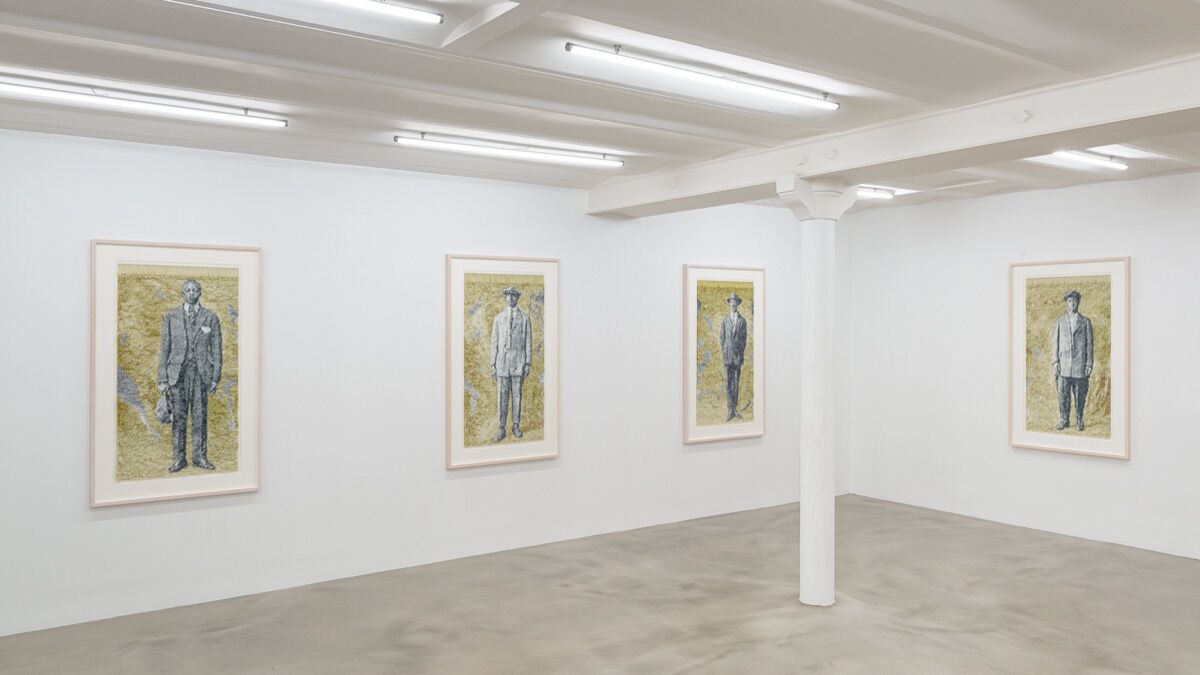 Nathalie Boutté, installation view of “Way Down South” at MAGNIN-A, 2020. Photo © Gregory Copitet. Courtesy of the artist and MAGNIN-A, Maraius. 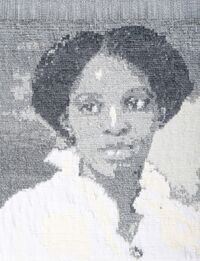 Way Down South
View Slideshow
6 Images
Several of these original photographs accompany Boutté’s often life-size or larger-than-life reconstitutions. The artist has carefully organized and arranged thousands of minute strips of fine Japanese paper to faithfully imitate the tonal values of the original gelatin-silver prints. In this process of translation, it is not only the scale that changes, but also the textures. Boutté’s collages take on a slight three-dimensionality, like fur or plumage. What results are neither photographs, sculptures, nor any other easily definable media. Rather, they are something new and emotionally charged.
Explore Nathalie Boutté’s “Way Down South” on Artsy. 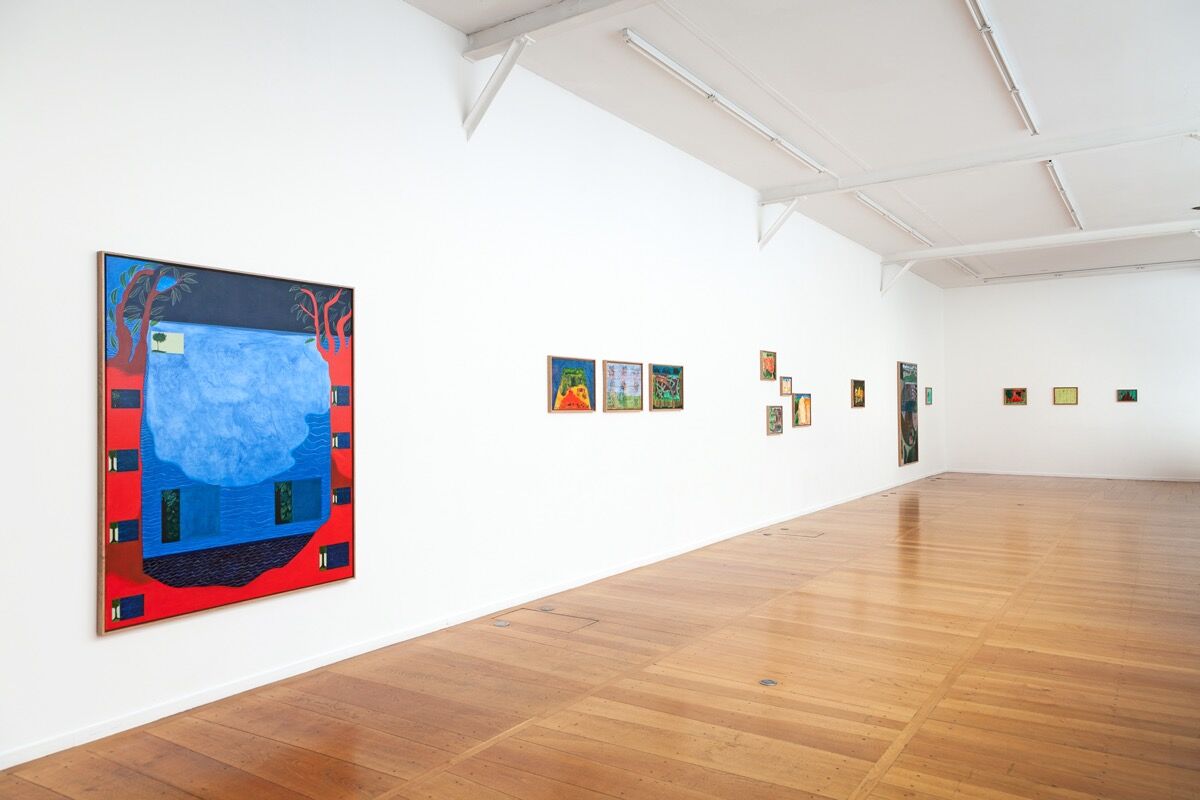 Karishma D’Souza, installation view of “Invocation” at Xippas, 2020. Photo by Frédéric Lanternier. Courtesy of the artist and Xippas, Marais.

A dreamlike quality unites the works of the Indian artist
Karishma D’Souza
’s latest solo show with Xippas, which visitors access via a long flight of narrow stairs leading up to a wide L-shaped hallway. Arranged in clusters, the variously sized paintings flicker between surreal abstraction and representation. The works are dense and intricate like codices and seem to confront the viewer with a repertoire of unknown symbols—houses, trees, spirals, and droplets of blood. According to the artist, these are allusions to the political and social situation in India. They speak to the dislocation of indigenous populations for the sake of urban development, deforestation by the “hungry ghosts” of industrialized capitalism, and the eradication, persecution, and misinformation of propaganda. 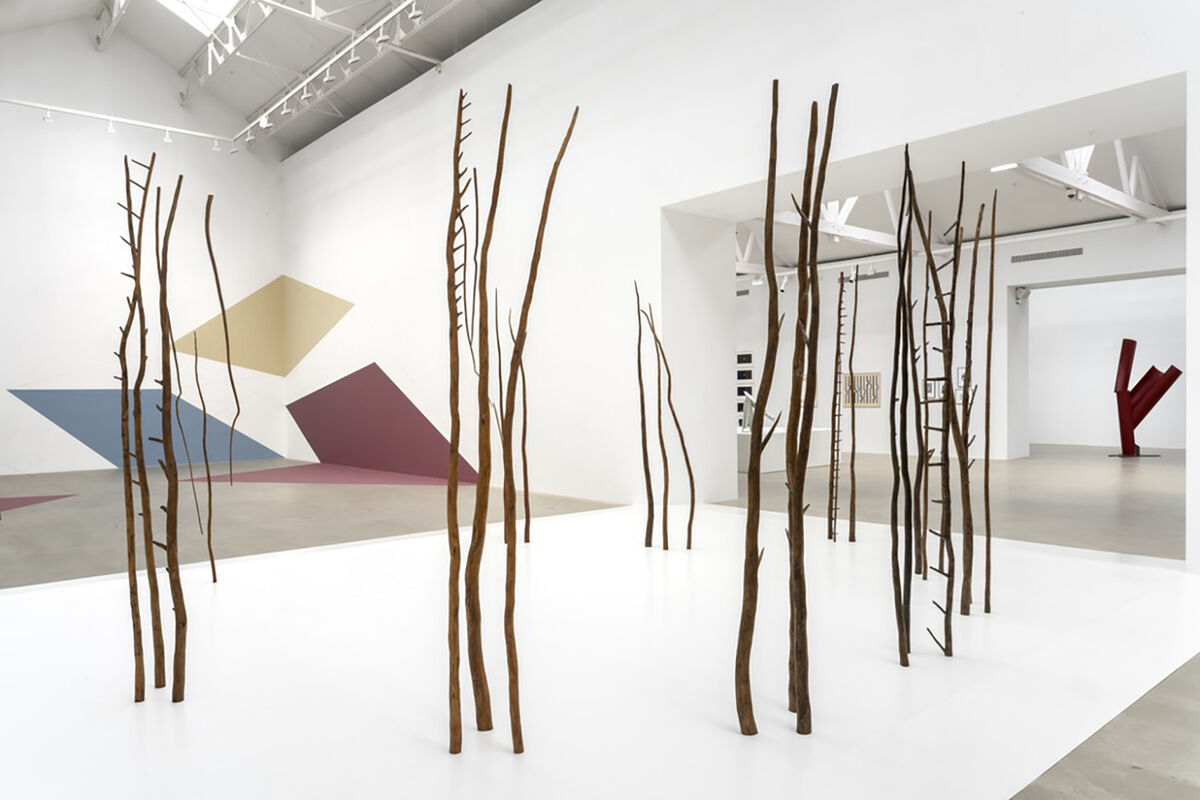 “Dimensions of Reality: Female Minimal” at Galerie Thaddaeus Ropac showcases the work of 14 lesser-known—and at times ignored—female artists working in geometric abstraction throughout the 20th century. Here we find a trio of photographs by
Lucia Moholy
, the Bauhaus documentarian whose personal photographic practice was long eclipsed behind that of her husband
László Moholy-Nagy
. In the 1930s, Bauhaus director
Walter Gropius
took many of her negatives with him to the United States, depositing them anonymously in the New Bauhaus’s archive in Chicago. Moholy had to engage in a protracted legal battle spanning many decades to retain her rights of authorship over these photographs.
The show also features British painter
Marlow Moss
, who was born Marjorie in 1889, but opted for a gender-neutral first name so as to hide her female identity from potential buyers and exhibitors of her work. In the 1930s, Moss was a founding member of the Parisian avant-garde group Abstraction-Création. She developed the compositional principle of the double line, which fellow painter
Piet Mondrian
would appropriate into his own paintings, all the while refusing to acknowledge Moss its inventor. To complicate matters further, almost all of Moss’s work from that crucial decade was lost when her studio was destroyed in a German air raid. 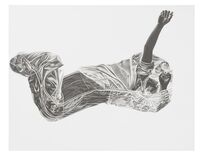 Dimensions of Reality: Female Minimal
View Slideshow
6 Images
In addition to tackling questions of gender and sexuality that have long plagued the reception of female artists, the exhibition also tackles the common misconception that
Minimalism
was a principally North American movement. Japanese, Brazilian, and Cuban artists figure prominently:
Lydia Okumura
’s monumental Five panels first realized at the Museu de Arte Moderna São Paulo (1984–2020) dominates the gallery’s second room, its angular pink and blue forms playing off those of reliefs by
Shizuko Yoshikawa
on the far wall.
The exhibition eschews chronology for an installation based on loose formal affinities between artists as diverse and talented as
Mary Miss
,
Lolo Soldevilla
,
Rosemaire Castoro
, and
Vera Molnár
. While detractors might criticize the exhibition for isolating female artists from their male peers, the quantity and quality allows us to appreciate just how much great art has been obscured by art history’s prejudicial and exclusitory narratives.
Explore “Dimensions of Reality: Female Minimal” on Artsy. 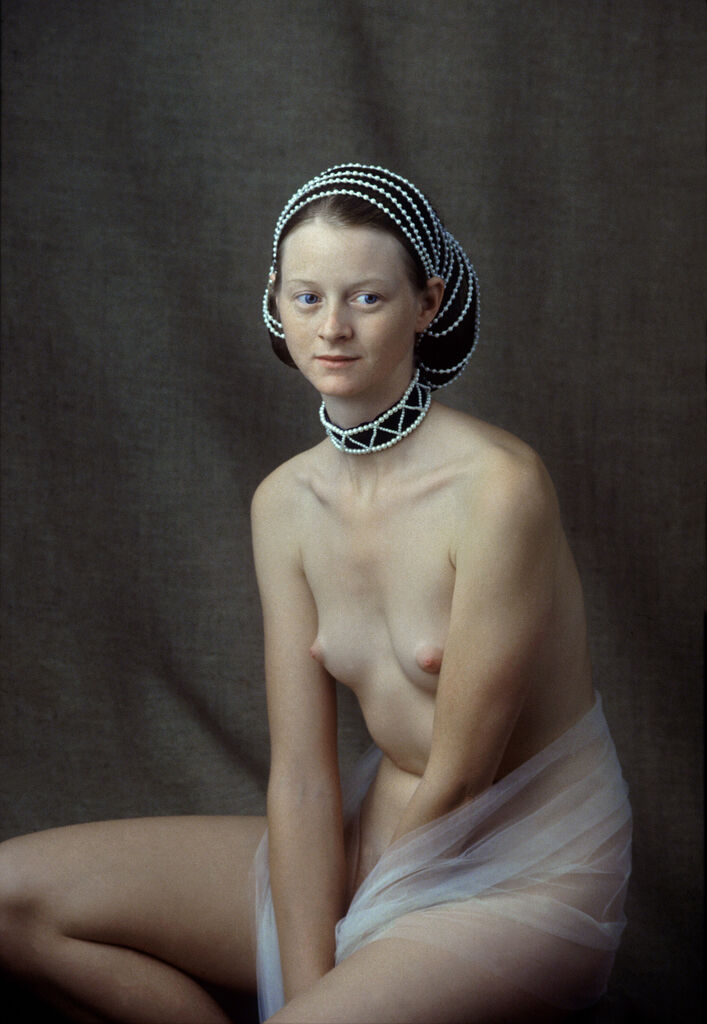 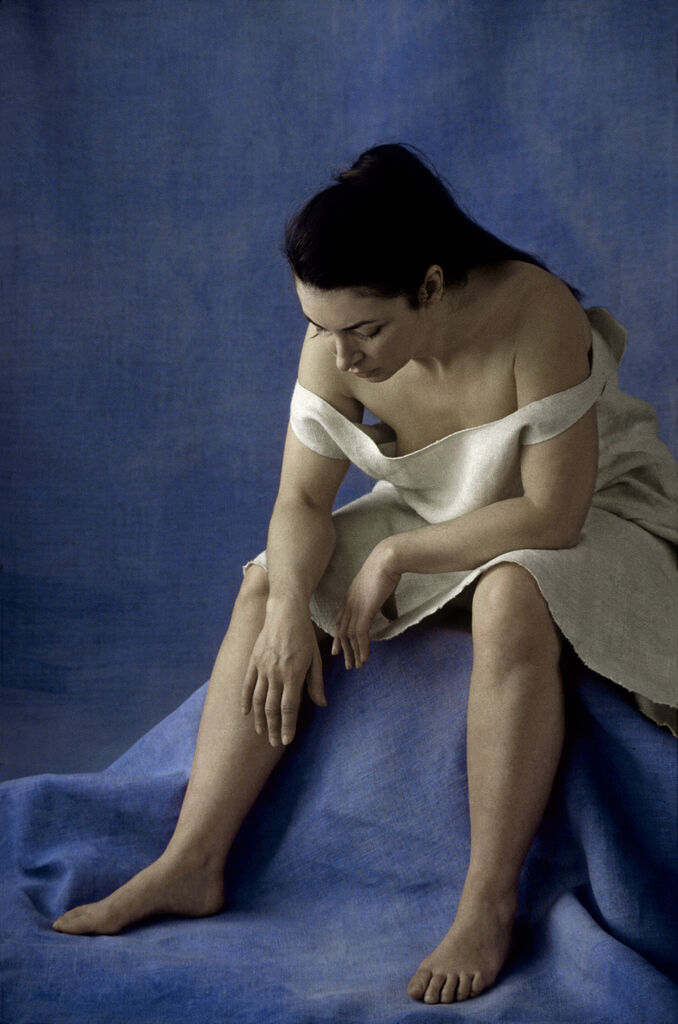 Frank Horvat
Claude, 1984
Galerie Lelong & Co.
Frank Horvat
’s explanation of his series “Vraies semblances” (“True likenesses”), in which female models are dressed and staged as famous paintings from art history, hasn’t aged well. Apparently, the idea came to him as he observed women in the metro, remarking upon their beauty as belonging to a bygone age. Despite this somewhat depressing reminder of how the male gaze has shaped the representation of women throughout art history, Horvat’s photographs, including the nudes, are devoid of the sort of libidinous objectification to which modern advertising has made us all too familiar. Indeed, Horvat’s images testify to his careful observation of Old Masters and modernists, like
Rembrant
,
Goya
,
Degas
, and
Picasso
. His imitations are so precise that even in the instances where specific paintings might be unfamiliar, the fidelity to stylistic, compositional, and even atmospheric trademarks renders the references instantly recognizable. 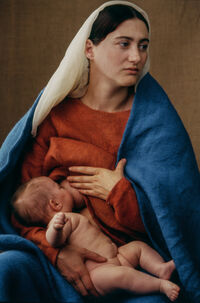 Vraies semblances, 1981–1986
View Slideshow
5 Images
Other than Horvat’s mastery over his medium, “Vraies semblances,” on view at Galerie Lelong, is striking for its contemporary resonance. One is surprised to learn that these photographs were taken in the 1980s, so accustomed have we become to seeing people cosplay famous artworks in the age of Instagram. During the COVID-19 lockdown, this sort of frivolous revival of the Renaissance tradition of the tableaux vivants became a welcome distraction from the uncertainties of the present, embraced even by the social media and communication teams of museums worldwide. Horvat’s photos take this activity to another level, elevating entertainment to fine art.
Explore Frank Horvat’s “Vraies semblances, 1981–1986” on Artsy.
Browse standout works from Paris Gallery Weekend 2020 on Artsy.
Wilson Tarbox
Related Stories