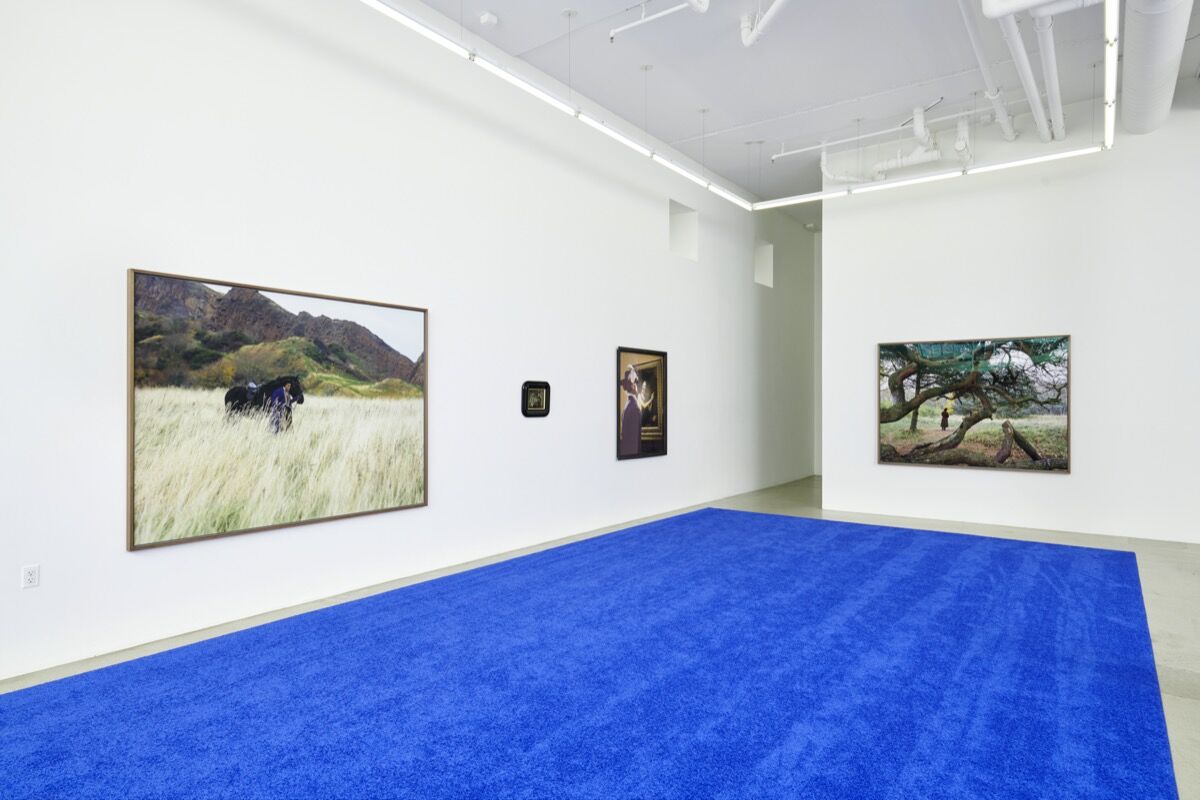 While galleries have temporarily closed worldwide due to COVID-19, we can still find inspiration through their exhibitions. As part of Artsy’s #ArtKeepsGoing campaign, each week we’re covering five gallery exhibitions that you can access via Artsy, with insights from the artists and our writers. This week, we’re sharing a selection of photography and film shows at galleries from San Francisco to Cape Town. 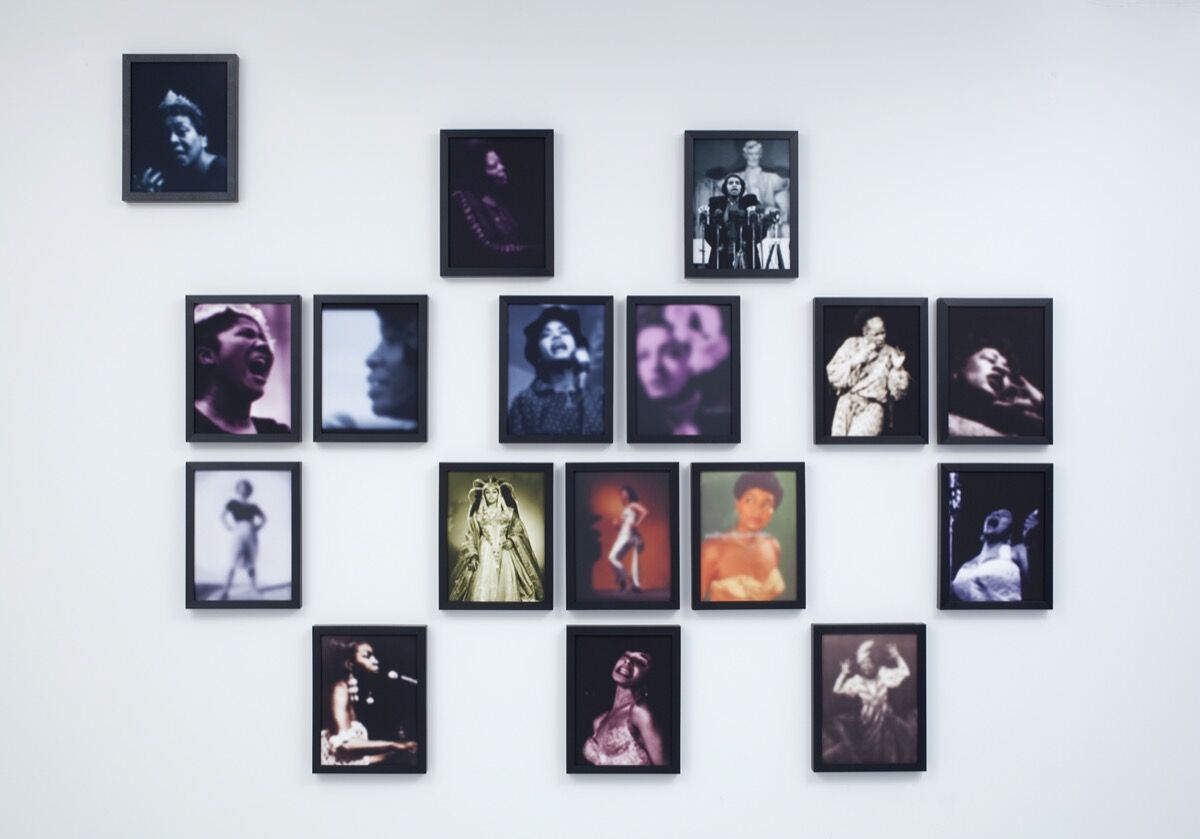 “Just a few minutes before you called, I was on a dance conference call with a friend of mine dancing to Stevie Wonder’s ‘Love’s in Need of Love Today’,” Carrie Mae Weems told me over the phone. Her love of music shines through in her current show “Over Time” at Goodman Gallery, which covers a quarter-century of work meditating on themes of race, power, and visibility.
In the series “Slow Fade to Black” (2010), Weems presents blurred photographs of Black female entertainers like Mahalia Jackson and Billie Holiday, visualizing the ways these trailblazing women are being erased from our collective memory of mid-20th-century music. Weems returns to the motif of evaporating legacies in “Blue Notes” (2014), using blocks of primary colors to reference the works of
Piet Mondrian
and
John Baldessari
, while obscuring her subjects. “There’s all this stuff that color blocks, and particularly in relationships to Black subjectivity and people of color, generally,” Weems said. “We are blocked from participating in the larger world based on notions of color.”

Carrie Mae Weems
View Slideshow
9 Images
Advertisement
Weems pivots her attention to major cultural institutions in “The Museum Series” (2005–present). Dressed in black with her back facing the camera, Weems stands outside renowned sites such as the Louvre and the British Museum, inviting us to consider who’s invited into these spaces. Since starting the series 15 years ago, museums have begun to expand their collections and programming to include Black artists.
While cultural institutions across the world are closed indefinitely and announcements of furloughed or laid-off staff members are frequent, Weems remains hopeful. “A disaster brought us to a new place, but it’s a place we needed to get to anyway. We needed a cultural and social reset for a very long time and this virus is bringing up all of these issues across the board,” Weems remarked. “It may be 15 or 20 years from now, but museums are going to have to change.”
—Harley Wong
See the show on Artsy. 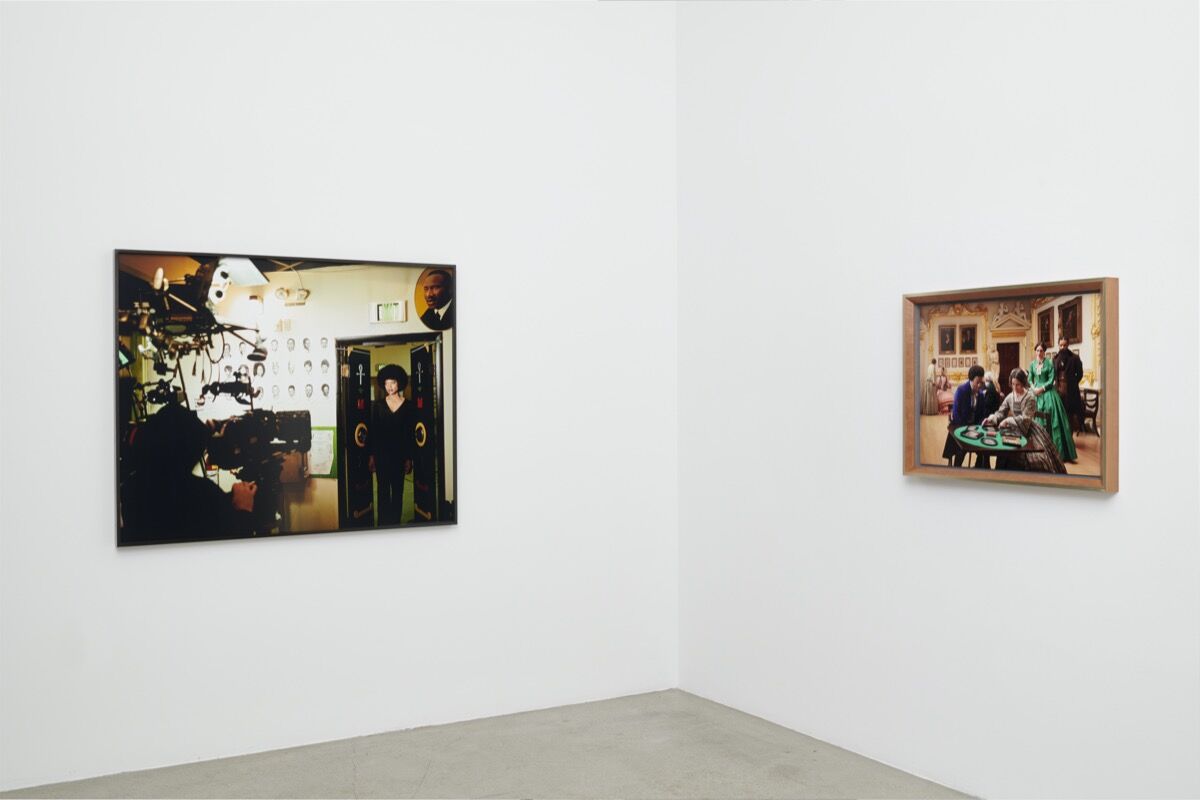 The British artist Isaac Julien’s distinctive interpretations of America are anchored in a series of personal letters written by his grandfather, who lived in Brooklyn, to his mother, who lives in London. His latest solo exhibition at Jessica Silverman Gallery, “Isaac Julien’s America,” invites viewers on a journey through the nation’s globalized history with three Black trailblazers: Frederick Douglass, an ex-slave, orator, and social reformer; Matthew Henson, the Black explorer who discovered the North Pole; and Angela Davis, the radical feminist, scholar, and social justice activist. 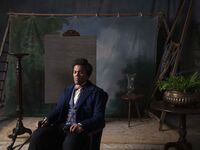 Isaac Julien
View Slideshow
9 Images
The series “Lessons of the Hour” (2019), named after Douglass’s final speech, reinterprets notable moments in his life through large-scale color photographs and a 10-screen film installation. One particularly arresting image, J. P. Ball Studio, 1867 Douglass (Lessons of the Hour), sees a Douglass lookalike seated in a photo studio amid various props. With the subject’s stoic expression, the image nods to iconic photographs taken of Douglass by the historical American photographer J.P. Ball. “Lyrics of Sunshine and Shadow,” a series of small black-and-white tintype portraits, is inspired by a poem by Paul Laurence Dunbar, one of the first highly acclaimed and influential Black poets.
—Daria Harper
See the show on Artsy. 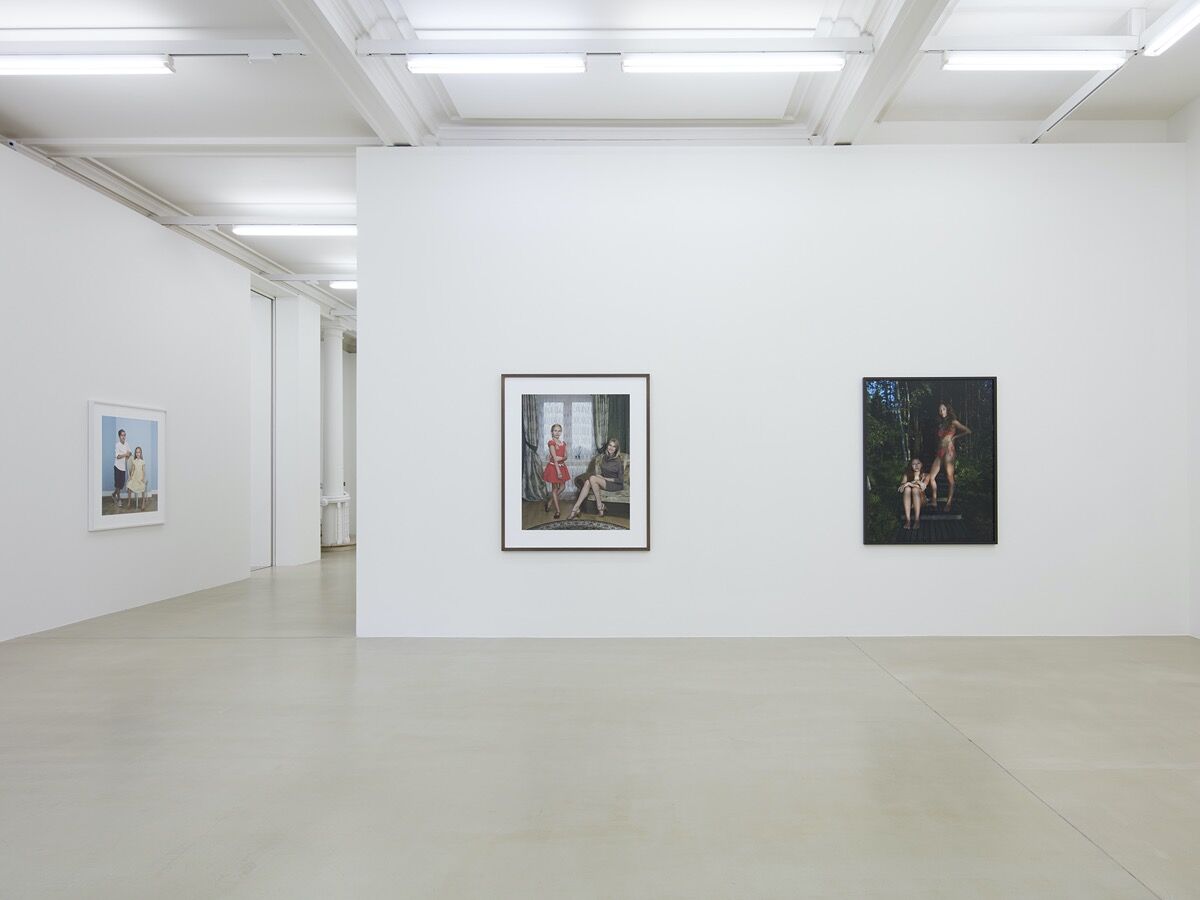 Rineke Dijkstra’s show at Marian Goodman Gallery is her first solo exhibition in the U.K. since 2010, and that epochal interval feels apt for the work on display. The photographs here are archives of time, of formative years, of growth and change, titled in Dijkstra’s usual format—a catalog-style listing of names, dates, and locations. Many of them, such as the series “Chen and Efrat” (1999–2005), capture family units over the course of several years, while others, such as Marianna and Sasha, Kingisepp, Russia, November 2, 2014 (2014), capture specific moments of togetherness. 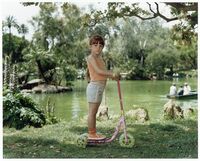 Rineke Dijkstra
View Slideshow
9 Images
The theme of closeness is thrown in especially stark relief when viewed in the context of self-isolation. While Dijkstra’s lens is first and foremost concerned with her central subjects, it’s hard not to read into the backgrounds and in-between spaces, whether that’s the verdant greenery of Parque de la Ciudadela, Barcelona, June 4, 2005 (2005) or the all-too-familiar domestic boredom of Alessandro and Sofia, London, February 9, 2020 (2020).
The three-channel video piece Night Watching (2019) is similarly concerned with closeness, and focuses on a scene we all surely miss: the shared experience of seeing and talking about art. The piece features 14 different groups discussing
Rembrandt
’s The Night Watch (1642) at the Rijksmuseum. While the show’s press release describes it as an exploration of “the different ways a viewer might relate to a painting and its subject,” the subject matter now feels like something much simpler and more emotionally rich: a paean to the possibilities that arise from merely being close to each other.
—Justin Kamp
See the show on Artsy. 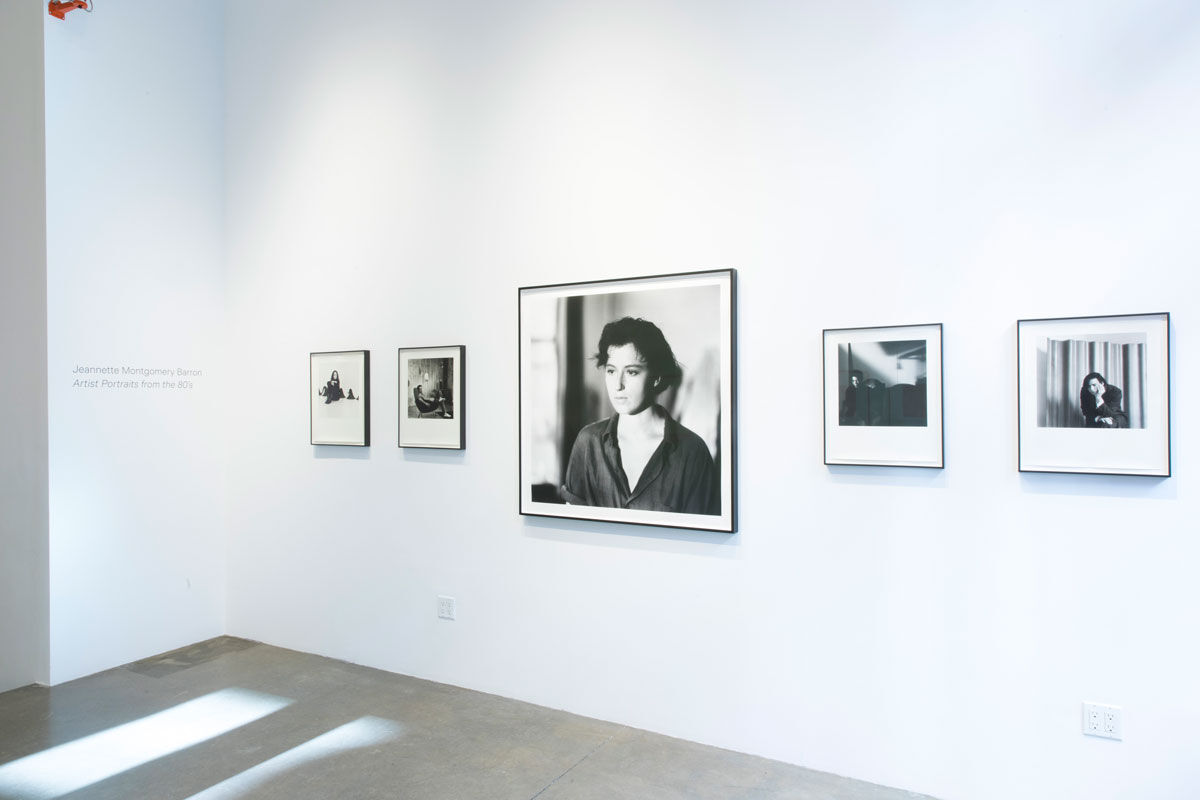 Jeannette Montgomery Barron’s portraits of artists from the 1980s offer a portal into a storied era of the New York art world. Barron started shooting the series when her friend, art dealer Thomas Ammann, gave her a list of artists’ phone numbers. “I just picked up the phone and asked if I could photograph them,” she said.
Choosing a black-and-white, soft focus format, Barron quickly generated a sense of nostalgia and mythmaking. She plays up the intensity of
Alex Katz
’s gaze as she captures him in a crisp white shirt, facing away from a piano, casting an ominous shadow on the wall behind him. Bianca Jagger looks glamorous as ever, her dark curls gently mussed and her mouth half open in a seductive pout.
Andy Warhol
sits on striped cat fur, his closed expression and crossed arms making him appear impenetrable. It’s a particular treat to gaze at the bare, guileless face of
Cindy Sherman
, that master of disguise. “She was shy. Like me,” Barron recalled. 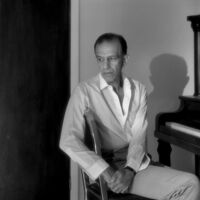 Jeannette Montgomery Barron
View Slideshow
9 Images
As bold and timeless as Barron’s subjects seem, the contemporary viewer knows better. Warhol,
William S. Burroughs
,
Robert Mapplethorpe
, and many others are long gone. Mary Boone is in jail.
Brice Marden
is battling cancer. In 1992, painter
Moira Dryer
passed away at age 34 from the disease. The specter of illness and death haunts Barron’s spare frames, turning her creative subjects into ghostly reminders that only art—not its makers—is eternal.
Barron—who’s also shot series featuring mirrors, pictures of Rome, and her mother’s clothes—is issuing a new edition of her artist portraits, aimed at younger collectors, to coincide with this show at Patrick Parrish.
—Alina Cohen
See the show on Artsy.

“One Third of a Nation: The Photographs of the Farm Security Administration” 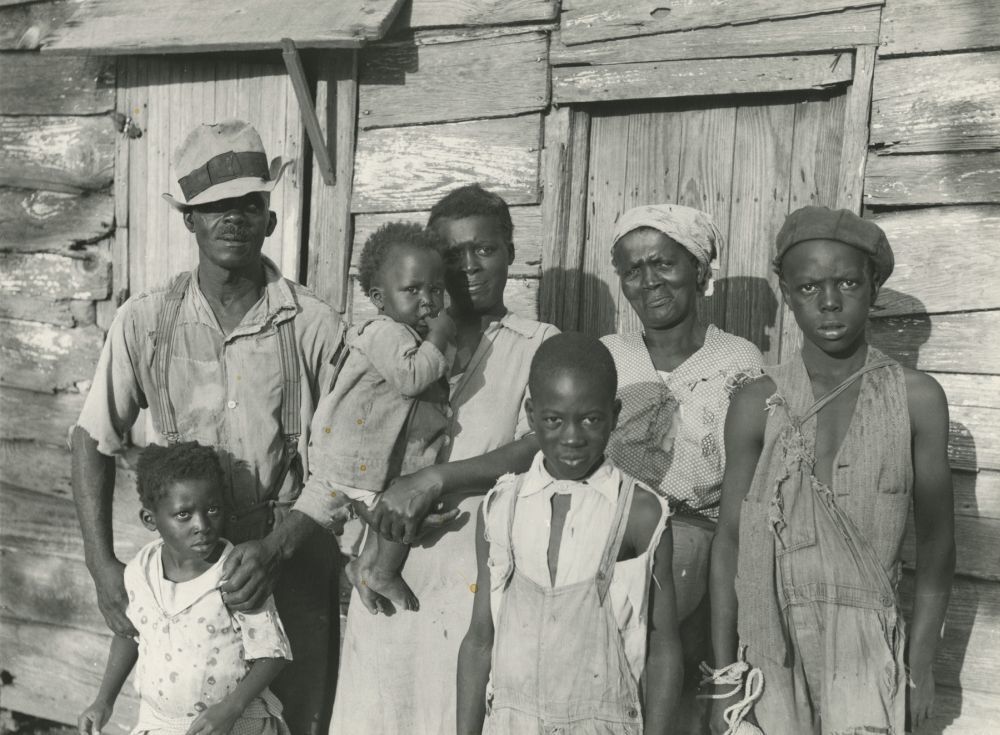 Carl Mydans
Lewis Hunter, Negro client, with his family, Lady's Island, Beaufort, South Carolina, June 1936
Howard Greenberg Gallery
During the 1930s, as the Great Depression and Dust Bowl devastated the country, photographers including
Walker Evans
,
Dorothea Lange
,
Gordon Parks
, and
Marion Post Wolcott
, among others, documented the destitution and poverty blighting the nation. Employed by FDR’s newly established Farm Security Administration (FSA) between 1935 and 1943, the photographers spent months traveling across America. They captured what words could not and allowed otherwise invisible individuals to be seen.
Nearly 80,000 images were taken as part of the program, many of which would be career-defining for the photographers. These sobering portraits of children, workers, and struggling families gave documentary photography new agency—suddenly, photographs became potent catalysts for social change. 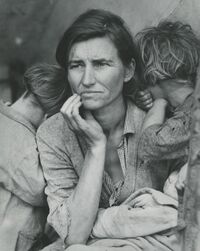 Ongoing Coverage of COVID-19’s Impact on the Art World

5 Shows by Emerging Artists You Can See Online 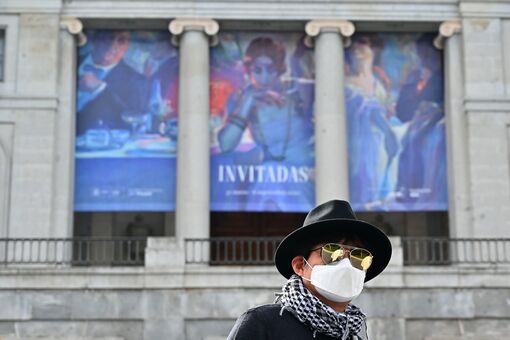 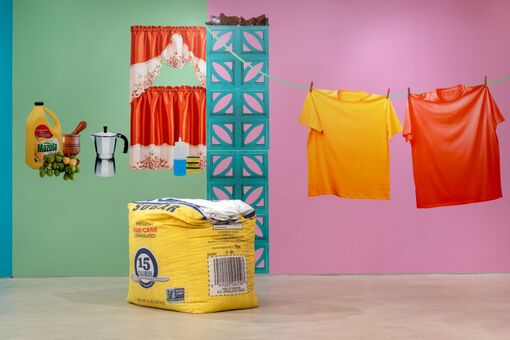 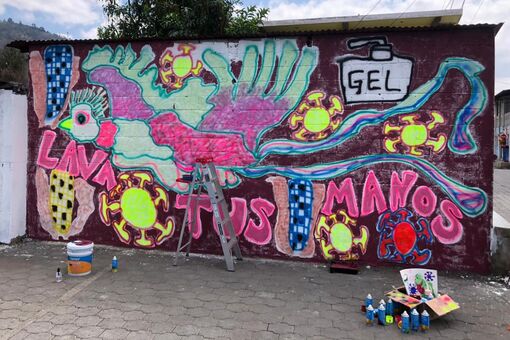