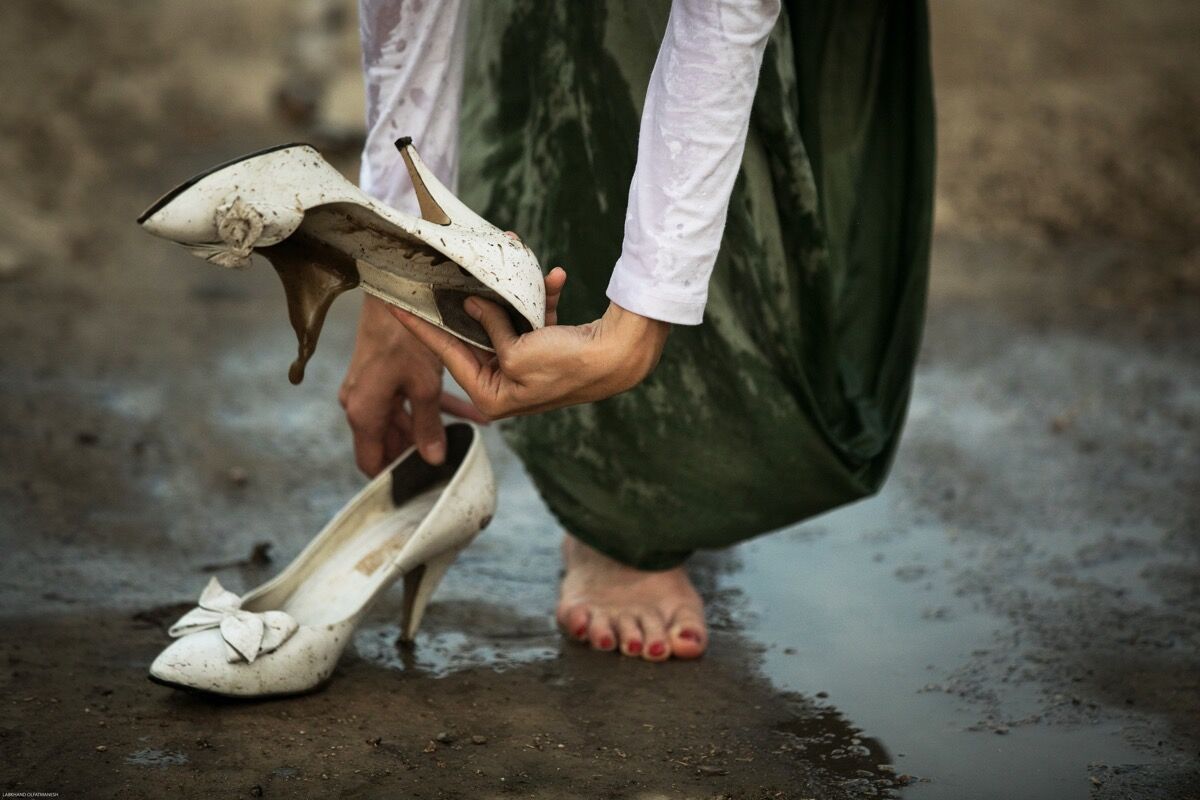 What is like to grow up as an Iranian today? The third edition of Focus Iran, a biennial exhibition presented by the Iranian arts-and-culture nonprofit Farhang Foundation, hopes to provide an answer through photography and video that explore contemporary Iranian youth culture.

3 Images
View Slideshow
The juried show—selected by Iranian photographers, filmmakers, and curators such as Babak Tafreshi, who shoots for the likes of National Geographic, and documentarian Maryam Zandi—features works by more than 40 image-makers and runs through May 12th at Los Angeles’s Craft & Folk Art Museum.
Here, six of the exhibiting photographers (two of whom work as pairs) share the backstories of their works. 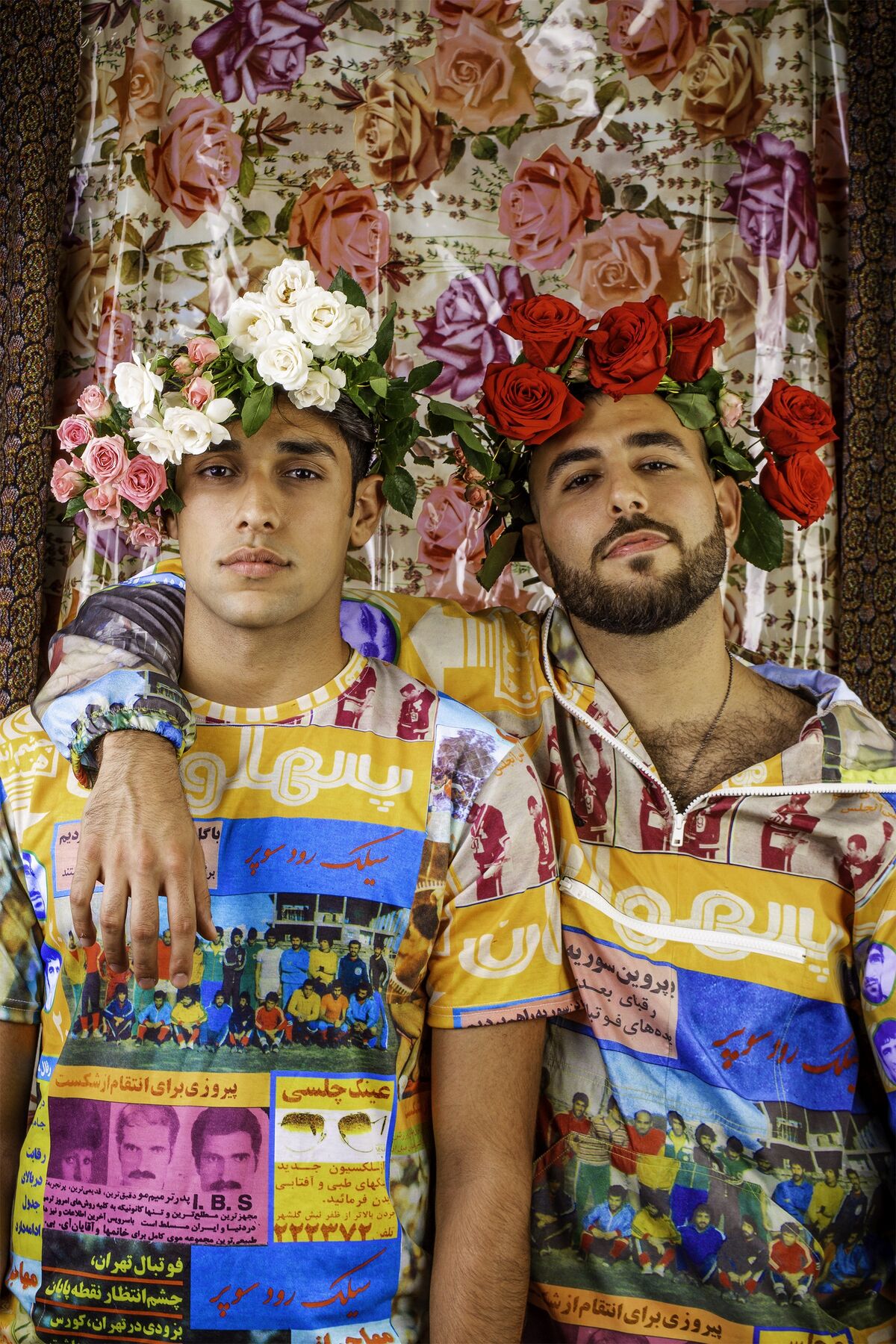 Hushidar Mortezaie and Jiyan Zandi, The Brotherhood, 2018. Courtesy of the artists.

Advertisement
Five years ago, when Hushidar Mortezaie’s father passed away, the Iranian-born, American-raised artist began a collage inspired by his father’s collection of 1970s Iranian sports, pop culture, and political ephemera. He created textiles from the design, which later became the basis of his collaboration with Jiyan Zandi, who was born in the U.S. but has roots in Iran’s Kurdish region, as well as Mexico. The pair titled the resulting, deeply personal body of work “The Champion Series” (2018).
One image from the series, titled The Brotherhood, features two men, crowned with roses and outfitted in Mortezaie’s textile designs; one man slings his arm around the other, their outward gazes soft but direct. Mortezaie said they created a set for the photograph that would be reminiscent of a retro photo studio in Kabul or Tehran. Family heirlooms provide a backdrop onto which Mortezaie said he and Zandi placed their “champions”—subjects in the series who represent the beauty of overcoming adversity—“onto a heroes’ shrine of roses.”
The work overflows with vibrant colors and celebrates masculine beauty in Iran and its diaspora, paying tribute to the designer’s father; Mortezaie, who is gay, said that his father accepted him unwaveringly, something he said is still uncommon in his culture. The image, he said, honors his “father’s gentle, yet strong spirit founded in love of all humanity, including his gay son.”
And the diversity captured in the image is a microcosm of Iran itself, Zandi said—something frequently lost in Western narratives of contemporary Iran. Together, the two photographers and two models represent Assyrian, Chaldean, Kurdish, Mexican, and Persian backgrounds. Zandi also hoped to highlight the key role that young Iranians play in shaping the country’s future.
“Young people make up the majority of the population [in Iran], and are defining the future, a future that will look very different from what we see today,” Zandi said. She sees this new narrative of the Middle East as one that “celebrates multicultural diversity, erases gender norms, and promotes LGBTQ acceptance.” 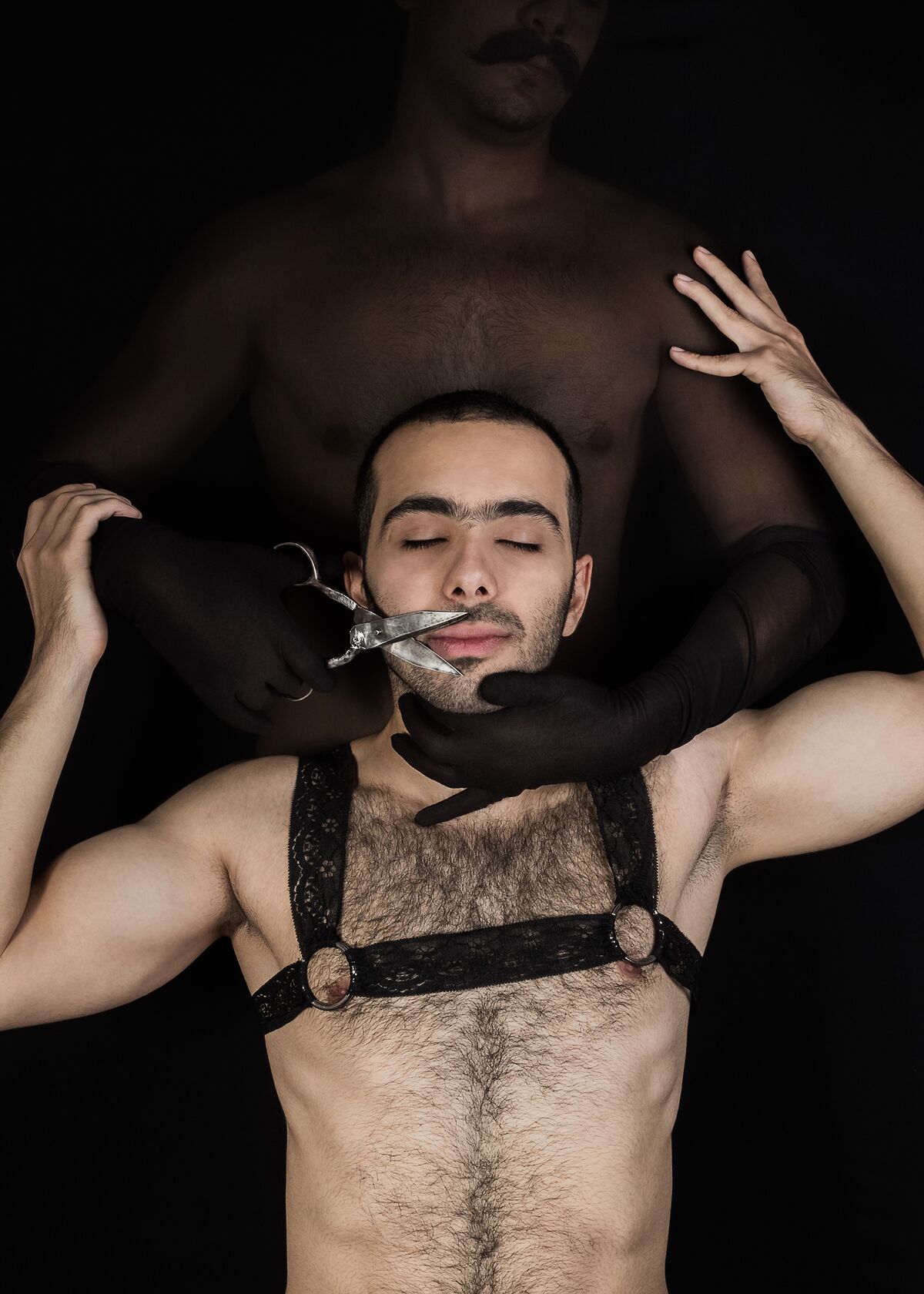 Milad Karamooz, The Kiss, 2016. Courtesy of the artist.

At the foreground of Milad Karamooz’s image The Kiss (2016) stands a man, shirtless except for a black harness, his closed eyes seemingly in a state of calm pleasure, despite metal shears that press against his mouth. Another man stands in shadow behind him, his gloved hand cradling his lover’s head the moment before he presses the blades together.
Karamooz, who was born in Tehran but now splits his time in the northern coastal city of Bandar-e Anzali, was initially asked to create this image for a group gallery show in the capital city entitled “The Kiss.” At the time, Karamooz said he was preoccupied with the idea of the pull of attraction toward painful or cruel relationships.
When the photographer submitted this image to the show, he was told he couldn’t exhibit the image because it was too sexually suggestive, and he was asked to modify his idea. Instead, Karamooz shot an entirely new image.
“I thought that if I did compromise the work by changing it, it would be the same as destroying it,” he said. Karamooz held onto his original photograph, hoping to exhibit it elsewhere in the future.
Iran is a dichotomy of “tradition and modernity,” Karamooz said. “On one hand, we are forced to maintain our traditions and conservative values, but on the other hand, the young generation is thirsty for freedom of thought, expression and open-mindedness.” The contradictions and tensions that result from growing up in Iran can inspire more creativity in how its residents find happiness. He added, “As an artist, this inner conflict is demonstrated in our art.” 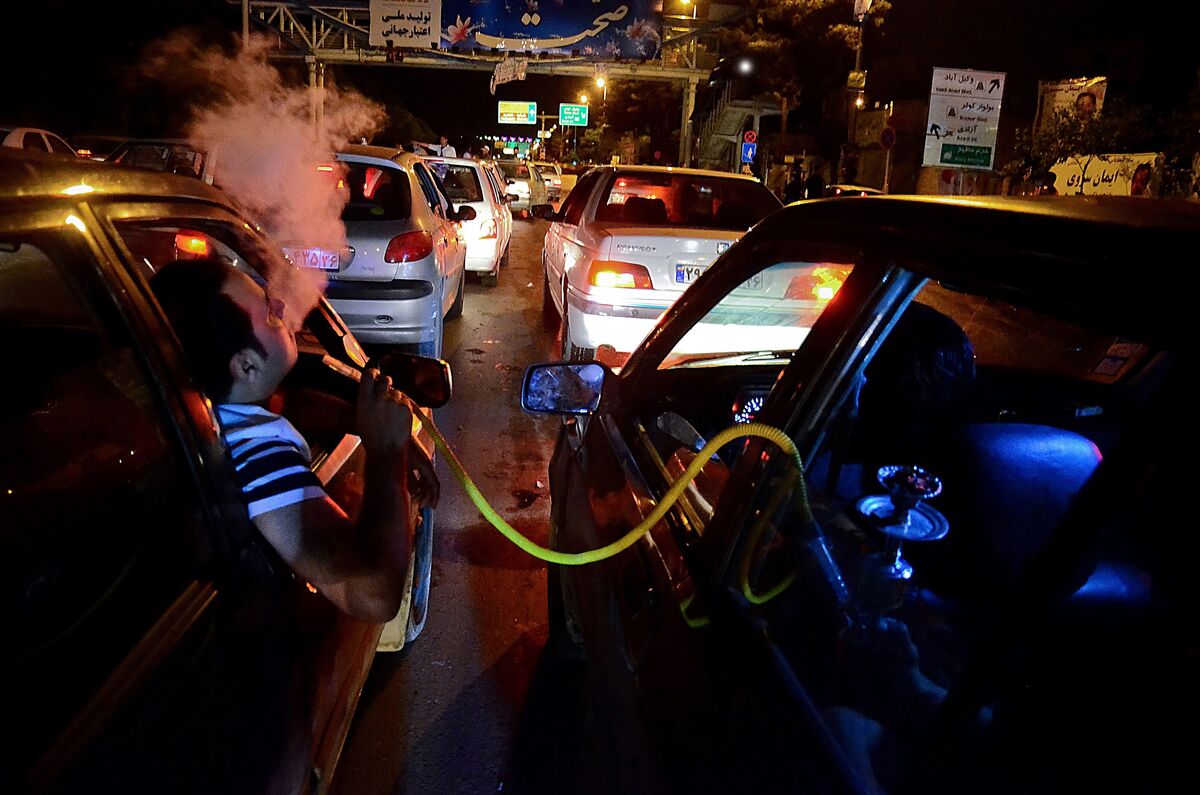 On May 18, 2017, the eve of Iran’s presidential election, photographer Hamed Kolahchian Tabrizi was searching for a taxi on a busy street in his home city of Mashhad. As he recalled, “A lot of people were in the streets to support and promote their candidates, and this gathering usually turns to a happy festive carnival or cars and pedestrians in the street.”
Unable to find an available cab, Tabrizi agreed when a nearby driver offered him a ride and got in the backseat. Waiting in the stand-still traffic, they saw the passenger of an adjacent car had begun smoking hookah in the backseat. He soon offered it up to Tabrizi’s car, and snaked the hose from their backseat to the passenger sitting in front of the photographer. Tabrizi stepped out of the vehicle to capture the scene, as the man in his car released a billow of smoke out of his window. He said he found the image particularly strange and unexpected because it captures a moment of respite in an otherwise restricted life.
“[On this] specific night, people were free to enjoy their time in the way they could,” Tabrizi said. 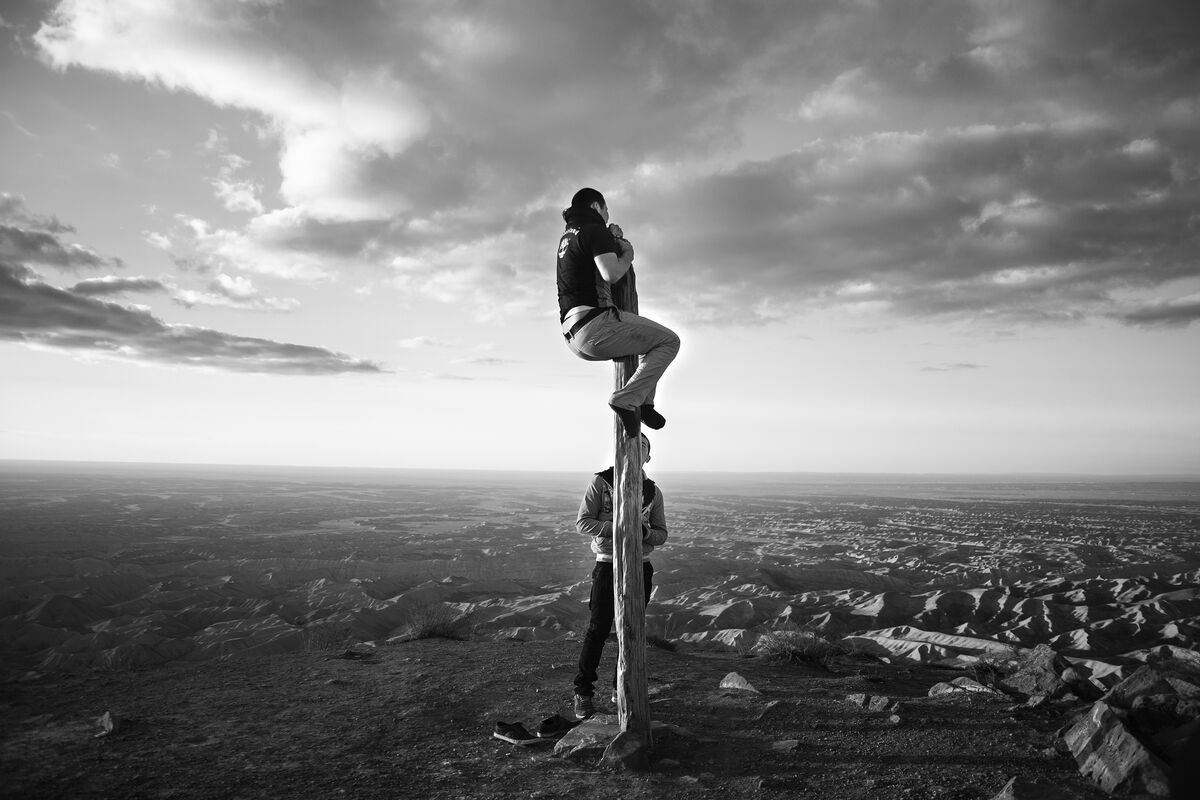 Hadi Safari, The Holy Healing Pole, 2015. Courtesy of the artist.

A young man climbs to the top of a wood pole rising from the ground, a stretch of low-hanging clouds behind him as he breaks the horizon line in Hadi Safari’s black-and-white photograph The Holy Healing Pole (2015). Next to his discarded shoes, another boy waits for him below; they are seemingly alone in a vast expanse of open land, except for Safari, who stands back to observe the scene.
The pole is located in Iran’s Golestan Province, and the Sunni Iranian Turkmens who live in the area believe it has healing powers: Climb to the top and bite down on it, and your toothache will be cured. The ritual has been performed so many times, the wood has become smooth and difficult to climb.
Safari was born and raised in Mashhad, the busy metropolis in northeastern Iran, but is now based out of Irvine, California. The image this series is from, “Dab Diyar” (“dignity and status”), is a four-year project in Iran that captures the diversity of its population. Echoing Mortezaie and Zandi, Safari said the series intends to capture the myriad cultures that live under one flag.
“Many different nationalities and ethnicities live within Iran, and they each have their own cultures and traditions,” he said. It’s a country brimming with singular opportunities to “showcase images that are very far, exotic and unreal to the world.” 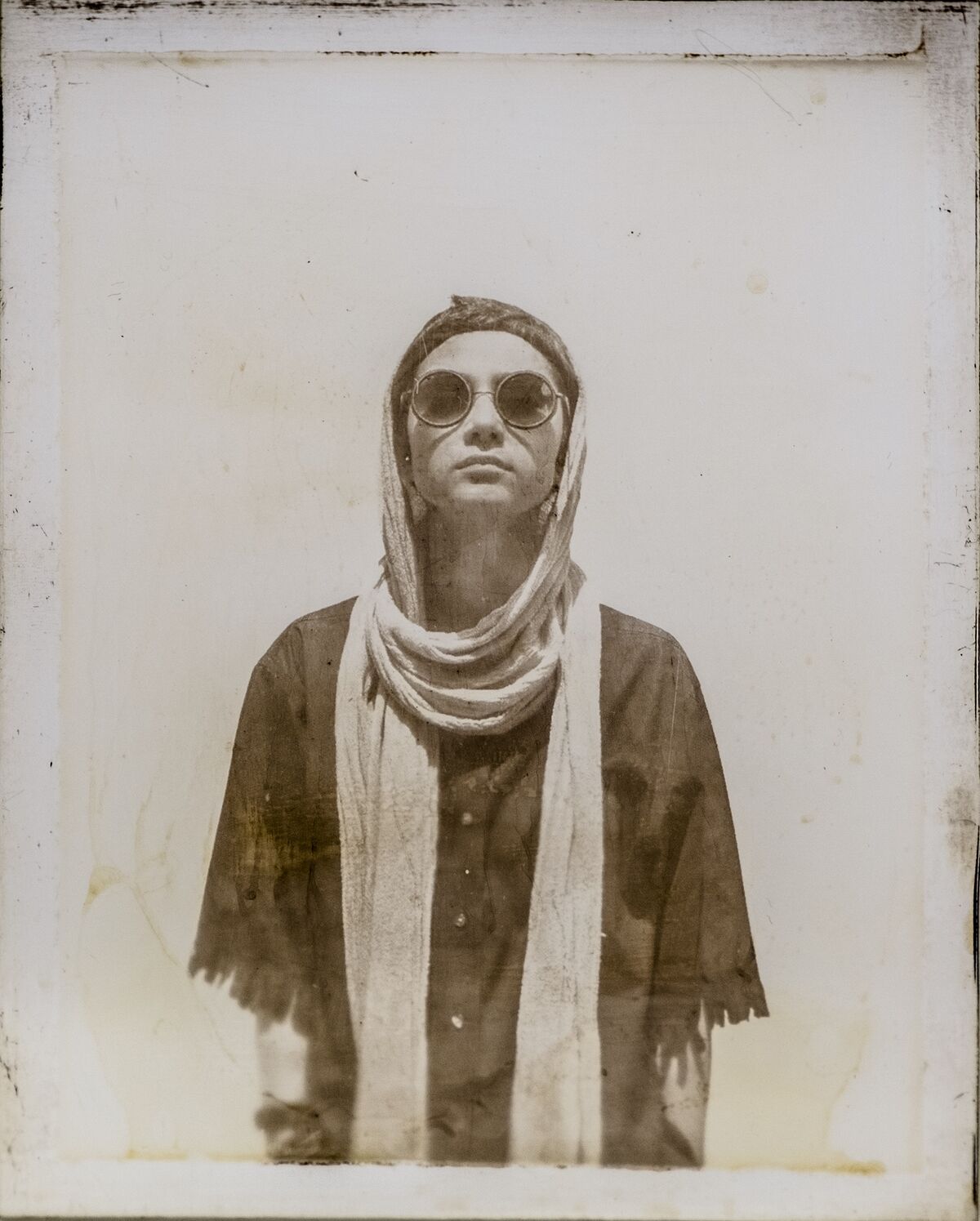 This photograph is from Negar Latifian’s series “Simin,” which means “silver” in Farsi. It’s a reference to both the gelatin-silver photographic process Latifian uses in the series, as well as the photographer’s subjects—Simin is a common name for girls in Iran. Latifian, who grew up in Tehran and remains based there, highlights the clothing and style of the new generation of Iranian girls. Following the Iranian Revolution in 1979, women and girls were required to cover their hair with a hijab and wear loose clothing.
“Since there are hijab dress restrictions for Iranians, for many years, many women didn’t have any individual style and all looked similar in dress,” she explained. “But in recent years, the young generation has pushed [for] change and have developed their unique style, while still adhering to the hijab rules.”
In this portrait from 2017, a young woman stands resolute with round sunglasses resting on the bridge of her nose, her hands tucked into her pockets just out of the frame. Though her headscarf is wrapped loosely around her head, each end hanging low against her shirt, her hair remains wrapped and concealed beneath it.
Latifian said that growing up immersed in Iran’s rich history and culture has shaped her work in ways both intended and subconscious—and has compelled her to represent the culture of her home country to a wider audience.
Jacqui Palumbo is a contributing writer for Artsy Editorial.
Related Stories