The 5 Power Moves Transforming the Art Market This Fall

Nate Freeman
Sep 14, 2018 4:55pm
Each fall, the art market awakes from its summer slumber with a sonic boom. In the weeks after Labor Day, hundreds of galleries open some of their strongest shows of the year, followed by a mushrooming of fairs in October and November in London, Paris, and Shanghai. The season is capped by the fall evening sales in New York in mid-November, which set the tone for Art Basel in Miami Beach just a few weeks later.
Out of the torrent of gallery shows, fair booths, or auction lots set to be parsed over by the art market this fall, we identified the key takeaways to focus on this season. Let the games begin. 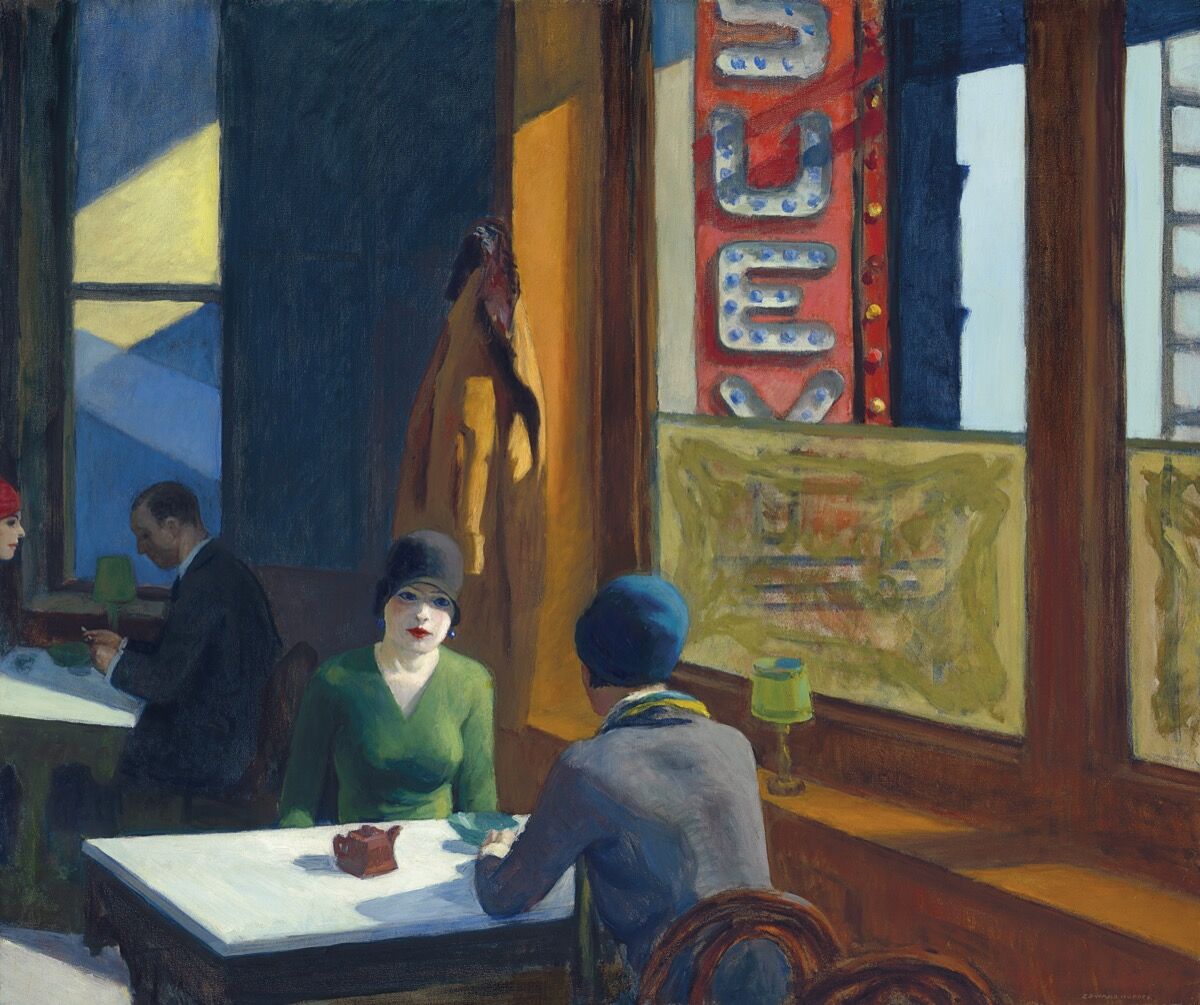 It’s only been a few months since the collection of Peggy and David Rockefeller grossed $832.6 million at Christie’s, making it the most valuable estate sale in history.
This fall, the auction house will follow it up with a stand-alone sale of a collection that’s nearly as impressive: work from the collection of Barney Ebsworth, the Seattle collector who assembled what is widely considered one of the great collections of American art. When Ebsworth died in April, he left five works to his local Seattle Art Museum, and six to the National Gallery of Art in Washington, D.C., with each institution getting one of his two masterpieces by
Georgia O’Keeffe
: Black, White and Blue (1930), and Music—Pink and Blue No.1 (1918).
One work that was reported to be donated, as well, was
Edward Hopper
’s Chop Suey (1929), a depiction of two women in pillbox hats waiting for their food at a Chinese restaurant—an iconic and instantly recognizable work of 20th-century American art. A profile of Ebsworth in the November 2007 issue of Seattle Met said it would be among the works given to the Seattle Art Museum, but instead it was bequeathed to the family, who decided to included Hopper's Chop Suey in the sale after Christie’s successfully pitched them, beating out other competing auction houses to get the estate.
“When we were pitching for the collection, [Chop Suey] was always the centerpiece of the sale,” Sara Friedlander, head of the post-war and contemporary department at Christie’s, told Artsy. “This was a collection that everyone has always been after—private collectors and institutions.”
It’s part of a number of exemplary collections that have been given to auction houses to sell in recent years. In 2016, Sotheby’s won the Steven and Ann Ames collection, and 25 of the couple’s paintings sold at the contemporary art evening auction that November for $122.8 million, above a $100 million guarantee. At this year’s post-war sale, Sotheby’s will offer work from the collection of late Museum of Modern Art trustee David Teiger, and these works are expected to bring in $100 million.
“For us, the holy grail is working with a collection, because it’s not dealer stock you’ve seen at every art fair, it’s not material that’s been up a million times on the block,” Friedlander said. 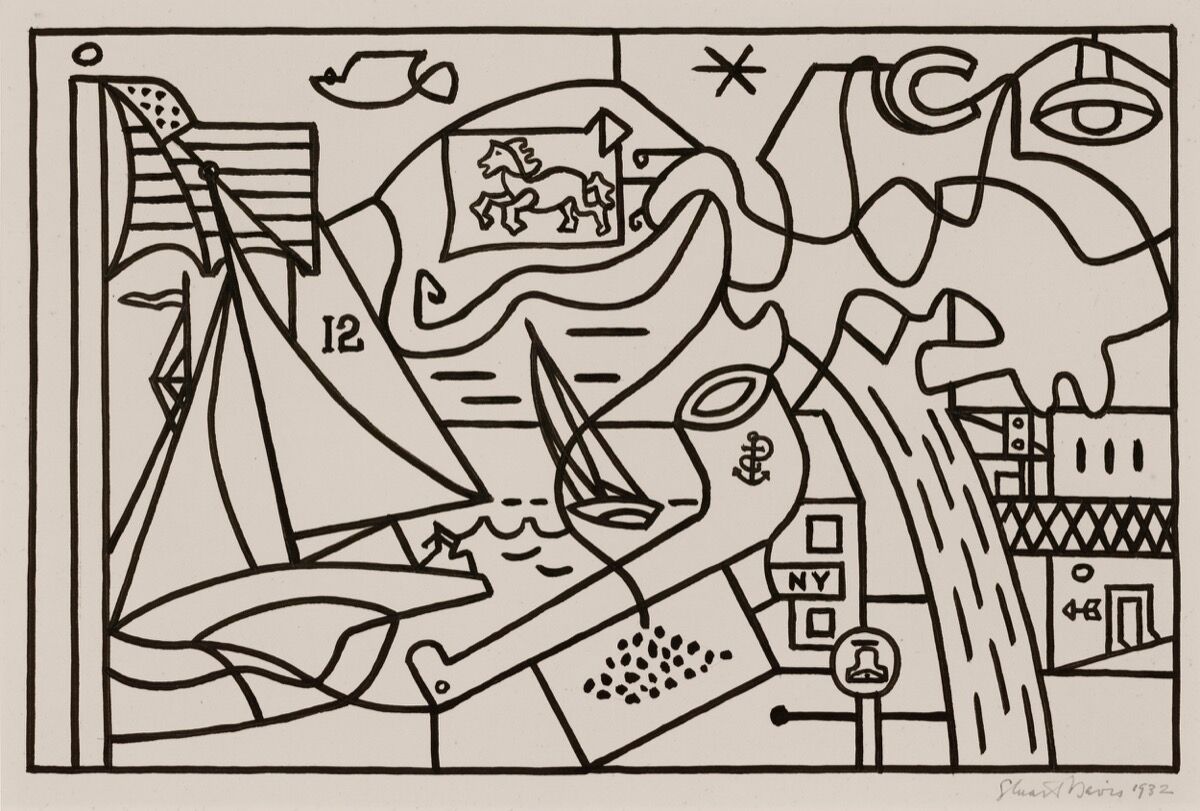 Advertisement
The arms race for artist estates has escalated in recent years, as galleries realized that there’s a market for under-recognized artists from the past, not just hot young market stars. This September, Hauser & Wirth is showing
Lygia Pape
uptown, Matthew Marks Gallery in Chelsea is showing
Anne Truitt
, and at its mini fiefdom of spaces around 10th Avenue and West 27th Street, Kasmin is staging shows of three of its estates: the Romanian sculptor
Constantin Brancusi
, the American
Abstract Expressionist
Lee Krasner
, and the
American Modernist
Stuart Davis
, the latest estate to join the gallery’s roster.
“This is a watershed moment for Davis, to be in a Chelsea gallery with contemporary artists in galleries nearby, positioned differently than in the past,” said Laura Lester, a director at the gallery who put together the show, “Lines Thicken: Stuart Davis in Black & White,” which opened September 13th.
Davis’s high-octane, jazzed-up paintings are often mentioned as a precursor to
Pop art
, but Lester said she wanted to unveil the gallery’s representation of the estate by staging a show of black-and-white works on paper—minimalist works that can be in concert with the contemporary output of the gallery’s living artists. Lester compared this to the way London gallery Victoria Miro brings work by
Milton Avery
to contemporary fairs and juxtaposes them with new work in a natural way.

In April, David Zwirner mentioned during a panel in Berlin that perhaps more prosperous galleries—like, um, David Zwirner—should subsidize struggling smaller galleries by paying more for fair booths.
“A little bit like a tax,” he told the crowd during the panel, which was convened by the New York Times. “You make a little more money, and you get taxed a little bit.”
Pace Gallery’s Marc Glimcher and Independent Art Fair founder Elizabeth Dee were in the crowd, and when asked if they would get behind such an idea, they offered their immediate support.
Not long after, fair directors have decided to experiment with sliding booth prices. On September 3rd, Art Basel announced that, starting in 2019, its fairs would begin to switch to a sliding scale, with the transition completed at Art Basel in Hong Kong in 2020. For the Swiss edition, the changes enacted will bring the price down to CHF 760 ($778) per square meter for a smaller booth of 25 square meters (269 square feet), versus CHF 905 ($927) per square meter for one of the fair’s larger booths of 124 square meters (1,335 square feet) starting next year. Frieze followed suit, announcing the next day that it would adjust prices at its new Los Angeles fair: The 215-foot booths will cost $38.50 per square foot, while 861-foot booths will go for $88.50 per square foot.
On September 6th, the International Contemporary Art Fair (FIAC)—the Parisian fair that takes place in mid-October—announced that it, too, would lower the price of smaller booths and raise the price of larger booths, lowering small booth prices by 5%, to €550 per square meter, and increasing larger booth prices by 2.2%, to €650 per square meter. “Much more must be done in the future to consolidate the position of galleries,” said director Jennifer Flay at the time of the announcement.
It’s a proactive move for the world’s most prestigious contemporary art fairs to quickly shift longtime pricing standards to support galleries. Frieze Fairs director Victoria Siddall said that she hopes galleries feel they can participate in fairs without breaking the bank.
“It’s not surprising that we are all talking about the same thing; galleries are raising the same concerns,” Siddall told The Art Newspaper. “It’s a positive thing that Art Basel is doing this, too. The more it becomes the norm, the more helpful it is for galleries.”

The coronation of Zao Wou-Ki 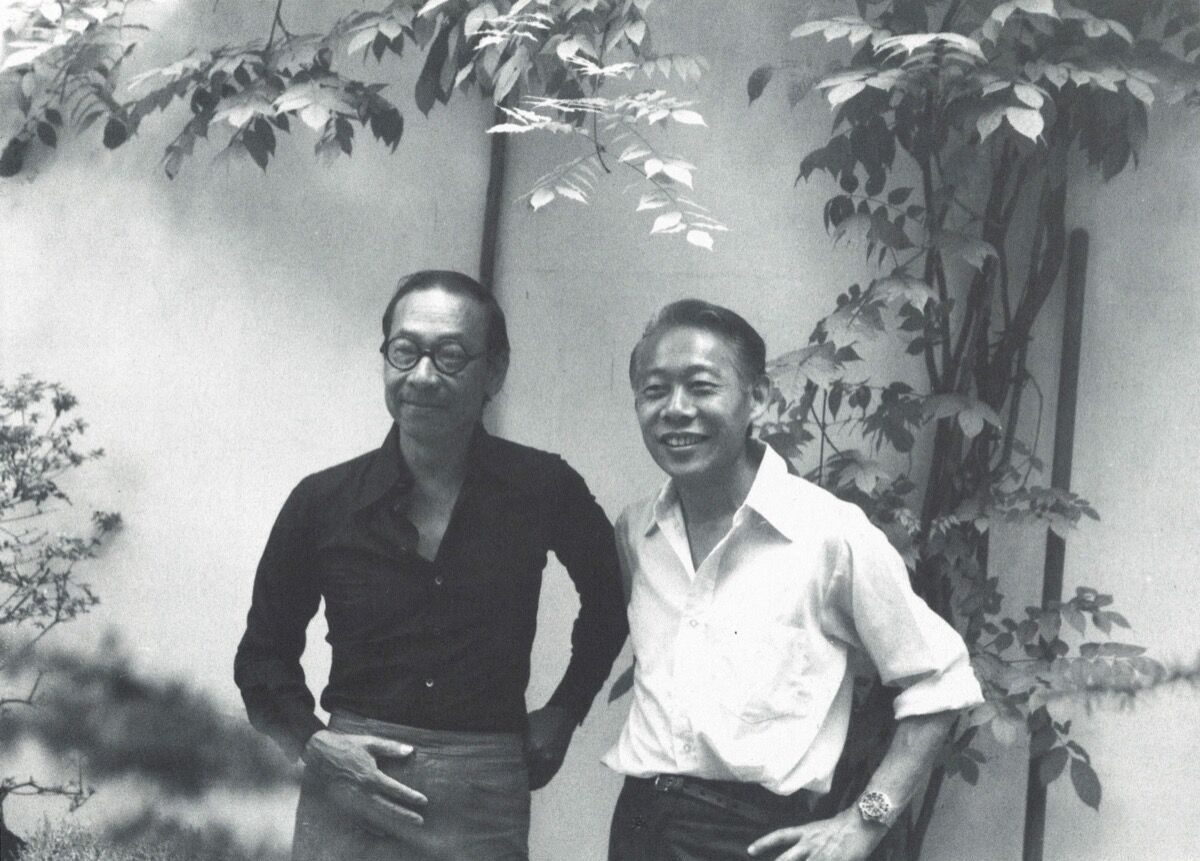 When Chinese-born artist
Zao Wou-Ki
died in April 2013, he left behind decades of work made as a émigré in France and Switzerland, where he befriended
Joan Miró
and
Alberto Giacometti
. At the time, his work was selling for $1 million to $2 million, according to the New York Times.
Now, Sotheby’s said that in 2017, works of Wou-Ki’s at auction grossed $156 million. In 2018, there have already been more than $135 million in sales, and his market is on track to go even higher.
Vinci Chang, Sotheby’s head of modern Asian art, said that such figures put Wou-Ki “on par with that of Western masters.”
In October 2013, during the 40th anniversary sale for Sotheby’s Hong Kong, five works by Wou-Ki sold for more than his previous $2 million mark, including two paintings that went for over $10 million.
By 2017, Wou-Ki was becoming one of the few artists who consistently cracks the $20 million range. One painting sold for $25.9 million at Sotheby’s Hong Kong in November of that year; early this year, another sold for $23.3 million—a record for the artist—at Poly Auction Hong Kong in March, and still another went for $22.6 million at Christie’s Hong Kong in May. 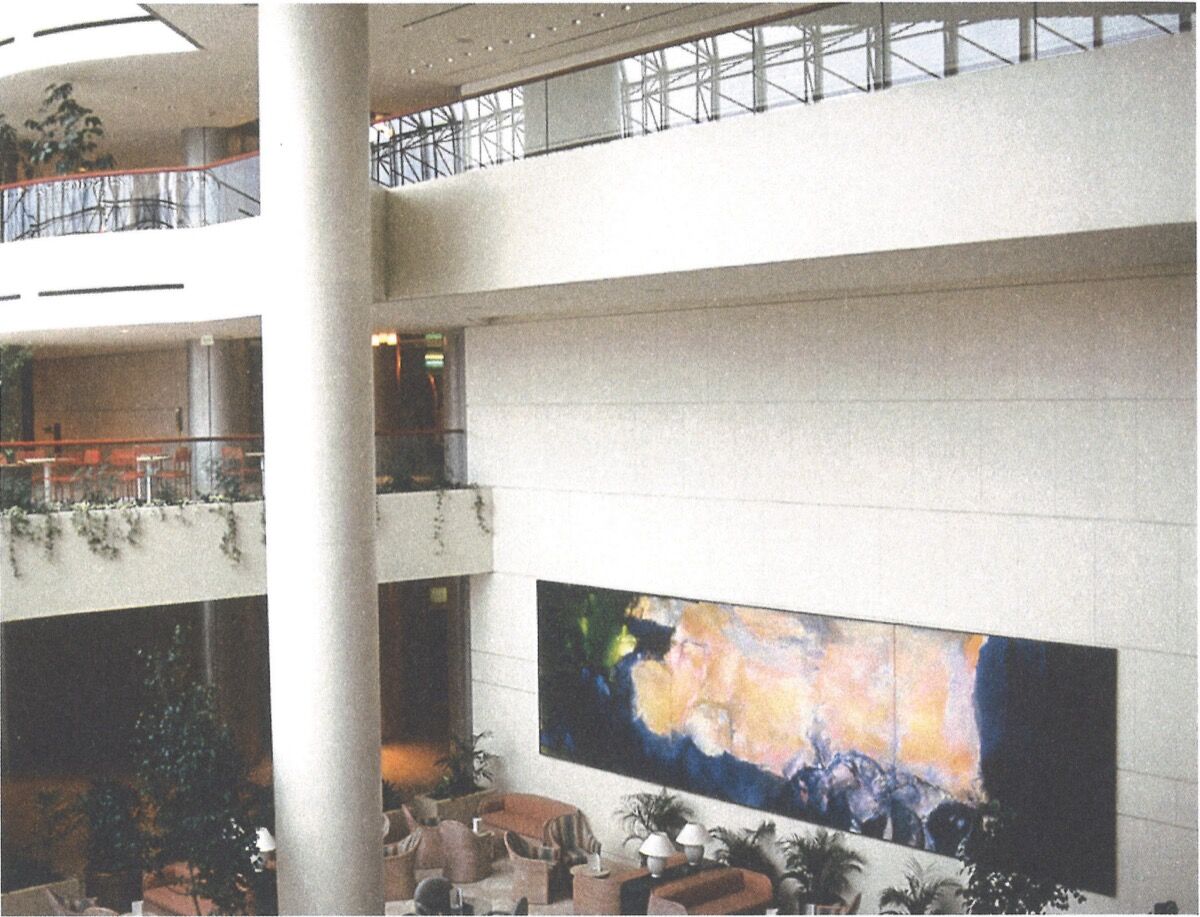 That record is set to be broken when Sotheby’s Hong Kong auctions off the triptych Juin-Octobre 1985 (1985), the largest work the master ever made: It’s estimated to sell for $45 million, which would make it the most expensive work ever sold by the auction house in Asia. Personally commissioned by
I.M. Pei
for the Raffles City shopping complex in Singapore, the mural is one of just 20 large-scale triptychs Wou-Ki made in his lifetime, of which just 10—including Juin-Octobre 1985—are left in private hands.
Even if auction houses have chosen to sell his work mostly out of Hong Kong—no auction house has sold a painting by him in New York since 2008, when his work fetched just $157,000—the new price bracket he’s entering will increase his reputation.
“It is no exaggeration to say that Zao Wou-Ki is one of the very few Chinese modern artists whose recognition has ascended to a global level,” Chang said. 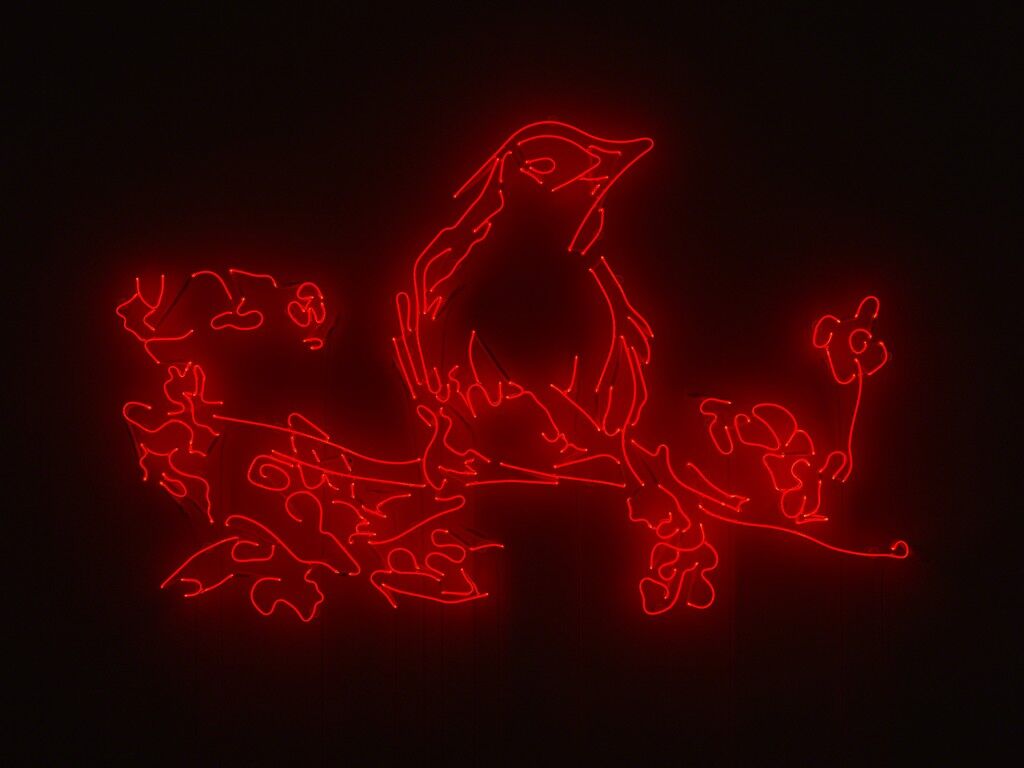 Tracey Emin
My Favourite Little Bird, 2010
White Cube
Word started to circulate during Art Basel in Miami Beach in 2015 that White Cube, one London’s most influential galleries, was gearing up to open a space in New York after decades of dominating across the pond. After a few years of waiting, in May 2018, the mega-gallery opened an office space on the Upper East Side, and in July, it poached Eric Shiner, former director of the Andy Warhol Museum, away from his position as senior vice president at Sotheby’s to be artistic director at White Cube. For now, the New York presence of White Cube has no white cube—there’s just office space on the third floor of a building on East 62nd Street, near Madison Avenue. But that location puts it within spitting distance of global peers such as Hauser & Wirth, David Zwirner, Lévy Gorvy, and, a little bit farther north, Gagosian.
A roster of White Cube’s caliber would make for a stream of blockbuster shows, as it includes
Damien Hirst
,
Tracey Emin
, and the most recent addition,
Danh Vo
, who typically shows a short walk away at Marian Goodman Gallery. Upper East Side galleries need to be on their toes.
Nate Freeman
Related Stories