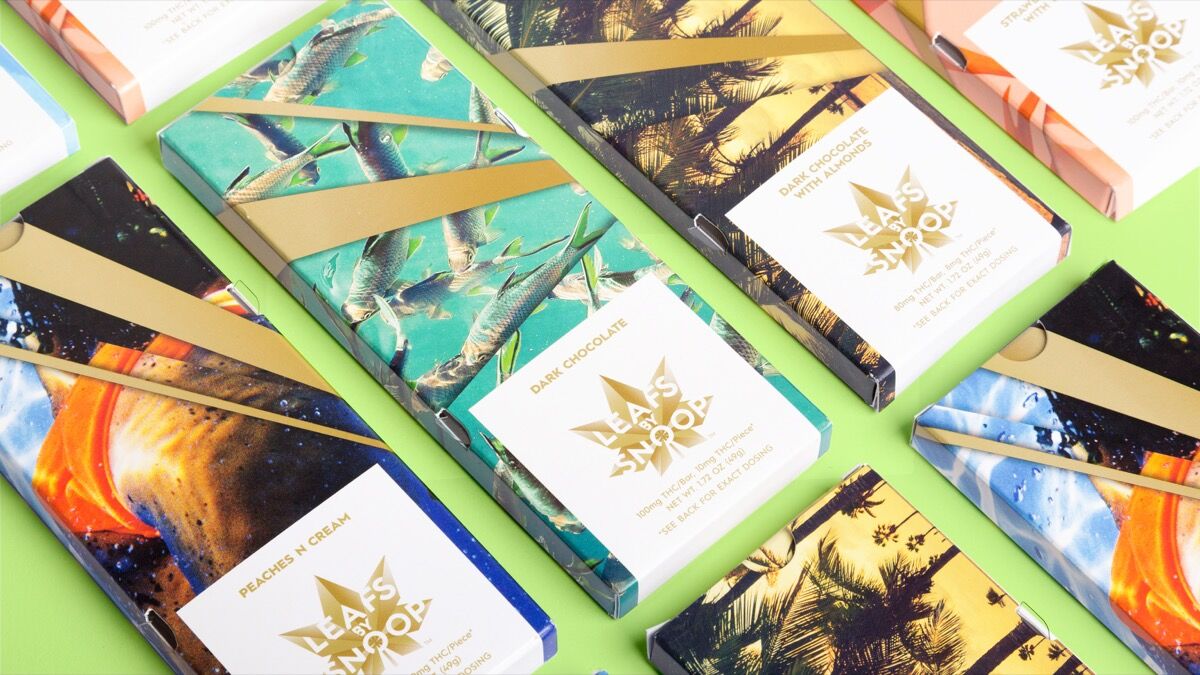 Branding for Leafs by Snoop by Pentagram. Courtesy of Pentagram.

On a big red billboard above Los Angeles, an elderly woman strikes a jaunty pose. She sports stylish sunglasses and bright lipstick. Beside her, the bold epithet “stoner” has been crossed out and replaced with “grandmother.” “Who is she?” I wondered when I saw the ad, which graced the skyline for three weeks this April.
As it turns out, her name is Barbara Rubin, and, in addition to enjoying cannabis-infused chocolate, she’s an avid hula-hooper with a Ph.D. I learned her backstory on the ad campaign’s dedicated website, Forgetstoner.com, which also features profiles of other cannabis aficionados, including a designer, a police officer, and a former offensive lineman in the NFL. The message was simple: Cannabis users are ordinary folks with jobs and families.
The campaign was produced by MedMen, one of the fastest-growing dispensary chains in the U.S. The company has been working to challenge the stigma around cannabis by pouring money into billboards, a lifestyle magazine, and retail spaces as sleek and brightly lit as the Apple store. MedMen’s “Forget Stoner” campaign, which ran on outdoor advertising spaces across L.A., challenged the stereotype that cannabis users are dull and unambitious.
Although a recent Pew survey found that around 6 out of 10 Americans now support legalization, the stigma persists. Just last week, after Elon Musk took a tentative puff during Joe Rogan’s podcast, Tesla’s stock dipped by 6 percent. (All this despite the fact Musk accepted the joint in California, where cannabis is legal.) Though most wouldn’t bat an eye at the tech company executive enjoying a few fingers of scotch or drinking a cup of coffee, images of him smoking a joint became a media event. Musk’s role as the cutting-edge entrepreneur behind Tesla and SpaceX was apparently incompatible with the stereotype of the bumbling, unfocused pothead.
The cannabis industry must contend not only with the image of the lazy pot smoker, but also the chilling effect of federal law that classes the plant as a Schedule I drug—placing it in the same legal category as LSD and heroin—as well as the devastation caused by the War on Drugs, particularly on communities of color, in which black cannabis users are disproportionately arrested and incarcerated.
Simply put, cannabis still has an image problem. How will designers and marketers rebrand it? I asked creatives who work with cannabis brands to weigh in with their approaches to this rapidly expanding industry. 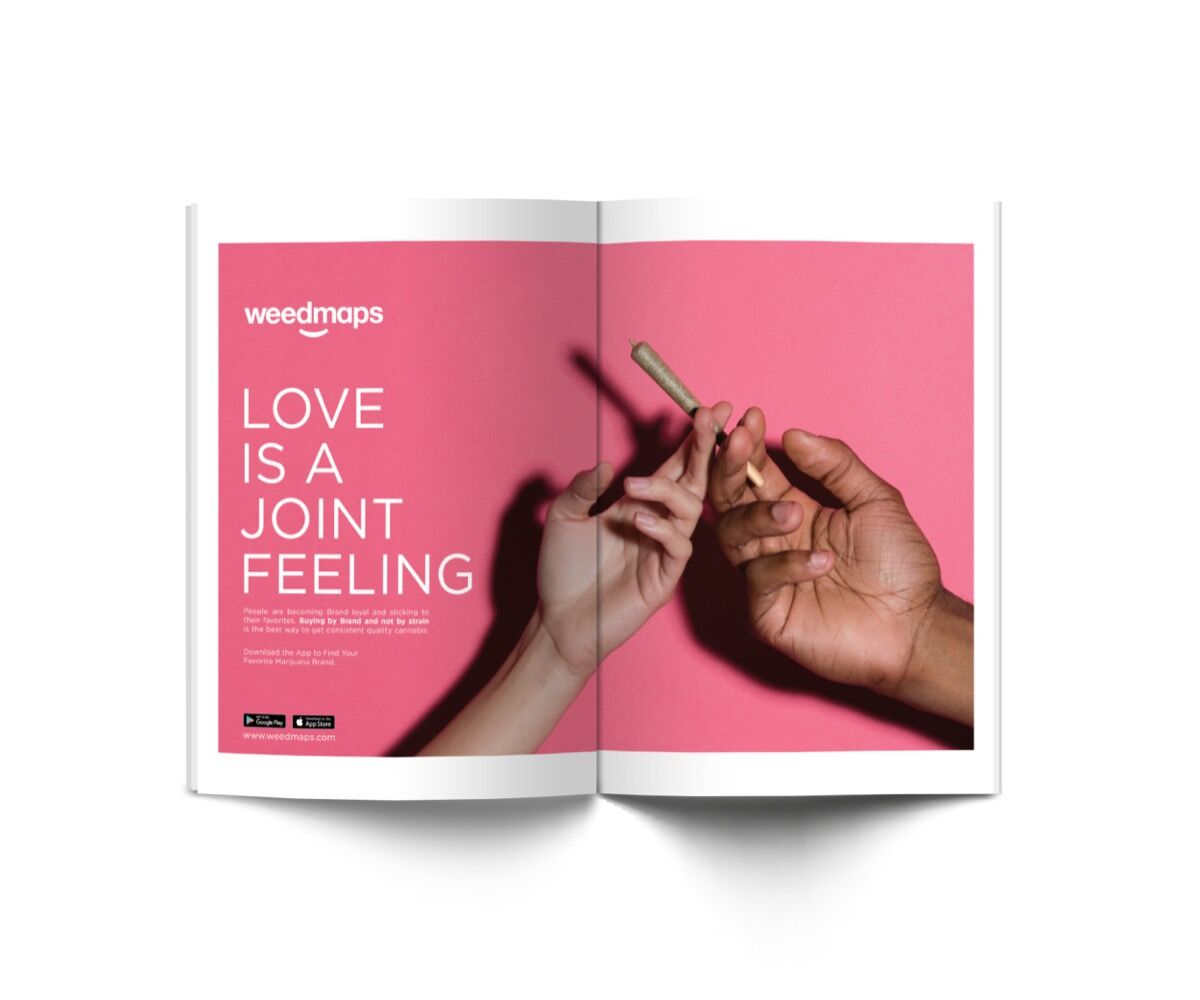 Advertisement for Weedmaps by Jeremy Parker. Courtesy of Bevel Group.

One strategy is to keep the design minimal and easy, which helps make cannabis feel accessible for a wider audience. “I use short, tight messaging,” explained Jeremy Parker, formerly of Weedmaps and current creative director of Bevel, a design and marketing firm that works with cannabis brands including farms, dispensaries, and tech companies. “Something so bold, there’s no way around it—so even if you don’t like the message, it’s going to stick with you.” Once, he designed a billboard that showed a pile of buds on one side of a greater-than symbol and a pile of pills on the other—an equation suggesting that cannabis could provide one solution to the opioid crisis. Sometimes a simple statement can provide a way into a more nuanced conversation, and Parker reported that the ad got a strong response from people who, though not cannabis users, did agree with the ad’s message about curtailing opioid addiction.
Parker emphasized that the design should be clean—that it wouldn’t look out of place on the shelf at Target—and it should avoid the visual clichés associated with cannabis. In order to be friendly to an expanded customer base,“[it] shouldn’t pop off as something crazy like a Cheech and Chong–type product,” he said.
A simple design is also practical for an industry in flux. Because the regulations governing the packaging and advertising of cannabis products vary from state to state—even city to city—and can often change abruptly, it makes sense for designs to be simple, flexible, and easy to update. “You’ll design a product and do 25,000 pieces, and then the next day, the law changes, and you have to change the verbiage on all the products,” Parker explained. 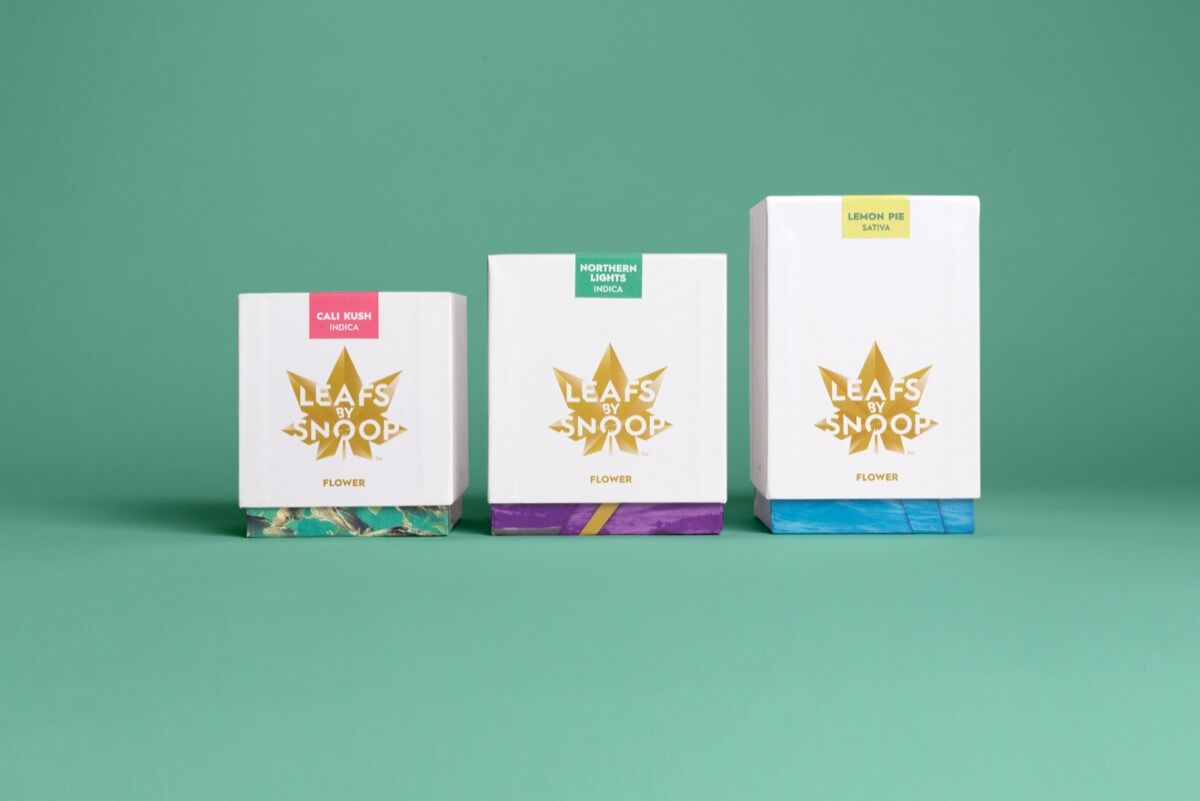 Branding for Leafs by Snoop by Pentagram. Courtesy of Pentagram.

Advertisement
Many of cannabis’s negative associations are evoked by tired visual clichés—front-and-center cannabis leaf icons, all-green-everything, and 420 references—which appeal only to the converted. When Pentagram designed the visual identity for Snoop Dogg’s brand of cannabis products, Leafs by Snoop, it was something of a breakout moment for cannabis to be taken seriously by a branding heavyweight. Pentagram partner Emily Oberman wanted to avoid what she described as the “hemp-y” aesthetic, instead creating something clean and elegant that would appeal to both college students and adults alike.
Rather than abandon the symbol entirely, Oberman’s solution for Leafs by Snoop’s logo was to transform the familiar green foliage into faceted golden rays. “The logo was an early pioneer in abstracting and elevating the cannabis leaf,” said Oberman. “By making it out of emerald facets, we were taking it to another place.” This motif extends to the packaging of the products, which feature prismatic photographs of swimmers, palm fronds, and mountain ranges, all evoking a chill California vibe.
In tandem with the Leafs logo design, Oberman’s team also created a logo for Snoop’s cannabis culture and news website, Merry Jane. While the concept of the leaf as a peace sign may seem fairly typical of marijuana branding, the logo reinvigorated two done-to-death visual clichés by only suggesting their forms in a streamlined, monochromatic design that traded in the typical circular peace sign for a square. Again, in a more recent Pentagram project, designing the packaging for cannabis concentrates purveyor Harmony Extracts, the leaf is flipped and camouflaged in the tail feathers of a bird. 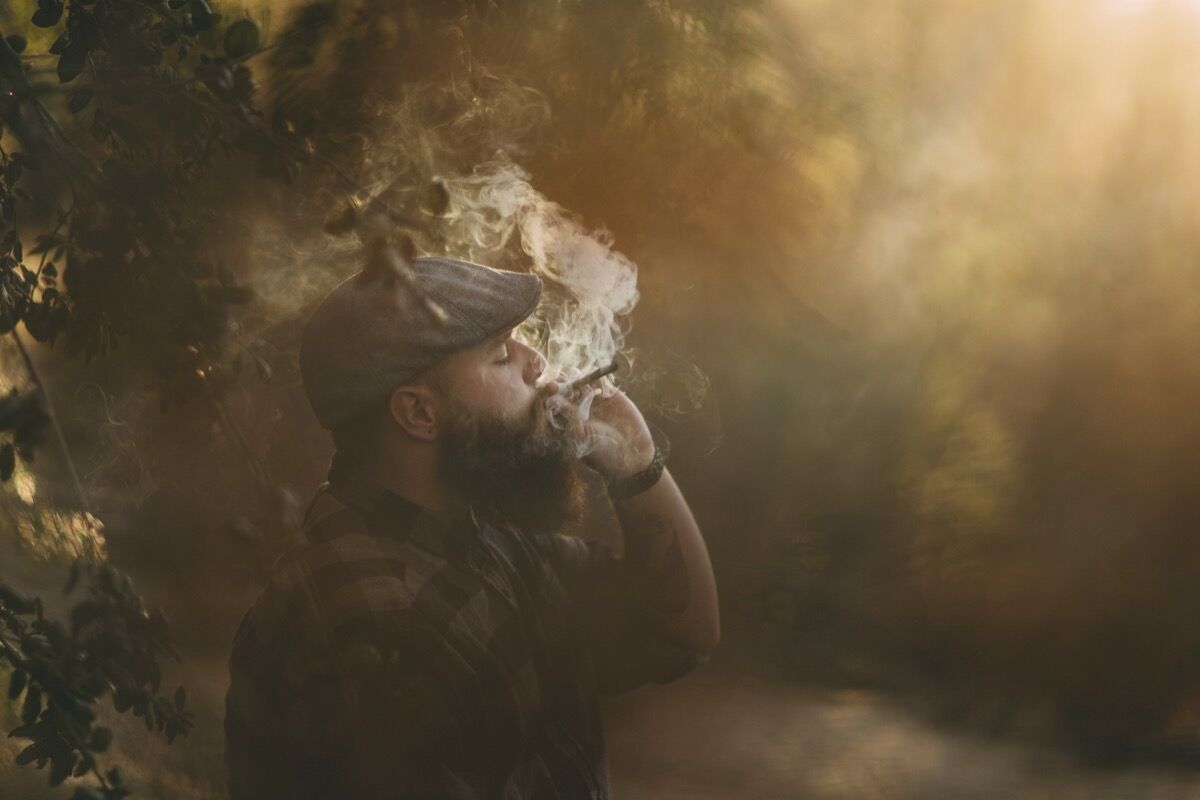 When Ophelia Chong first saw her sister ingesting cannabis to treat the symptoms of an autoimmune disease, she had a knee-jerk reaction. “I thought, ‘Oh my god, my sister’s a stoner!’” she recalled. “It upset me, because I realized I was stereotyping her and using language that was created for propaganda.” Chong, who at the time was the creative director for a stock photo agency, was curious how people like her sister were represented in stock photography. The results were disappointing. “The images that came up on major stock sites were mostly of African-American men,” she explained. “They were keyworded with things like ‘addict,’ ‘convict,’ ‘illegal,’ and ‘drug user.’ It was very racist.”
Chong decided to fill that niche, launching StockPot Images, a stock-image service with 240 photographers and more than 20,000 exclusive images of cannabis. The site, which launched in 2015, provides images of a diverse range of people who, Chong emphasized, are real users, not models. And because Chong is chiefly concerned with authenticity, the site provides a real education. You can see all the ways cannabis is grown (indoor, outdoor, canopy), every part of the plant (leaves, stems, flowers), and the strains of the plant (too numerous to list). The surest way to dispel stereotypes is with new and better images, and StockPot Images serves as a resource for media outlets to change how they illustrate cannabis.

It’s no coincidence that burgeoning brands are quickly dubbed the Apple, Hermès, or Barney’s of cannabis. “Designers and marketers are giving brands touchstones that the new mainstream user can grab onto,” Chong explained. “If you’re approaching the 35-year-old mom or the senior who remembers cannabis from the old days, you’ve got to use visual language that they understand.” This could be something as simple as using rose gold to indicate a premium product, or adding bright colors to a box to suggest fun and leisure.
“Our CEO wants us to be the Patagonia of cannabis,” said Meg Minuskin, senior director of marketing and communications at ISLAND, a California-based company that sells pre-rolls, cannabis flowers, and PAX pods. Island is marketing to an athletic, outdoorsy crowd, and its logo, a palm tree (or is it a cleverly disguised cannabis plant?) silhouetted against horizontal stripes, seems both familiar and nostalgic. Evoking 1970s VW vans and ocean breezes, the identity could easily be adopted by a brand of flip-flops without any changes to its design.
According to Minuskin, this lack of immediate association with the product is part of the brand’s message. “The point we’re trying to get across is [that] you don’t have to be this hardcore stoner who lives and breathes cannabis in order to enjoy this product,” she explained. “It’s something that can be integrated into a variety of lifestyles.” 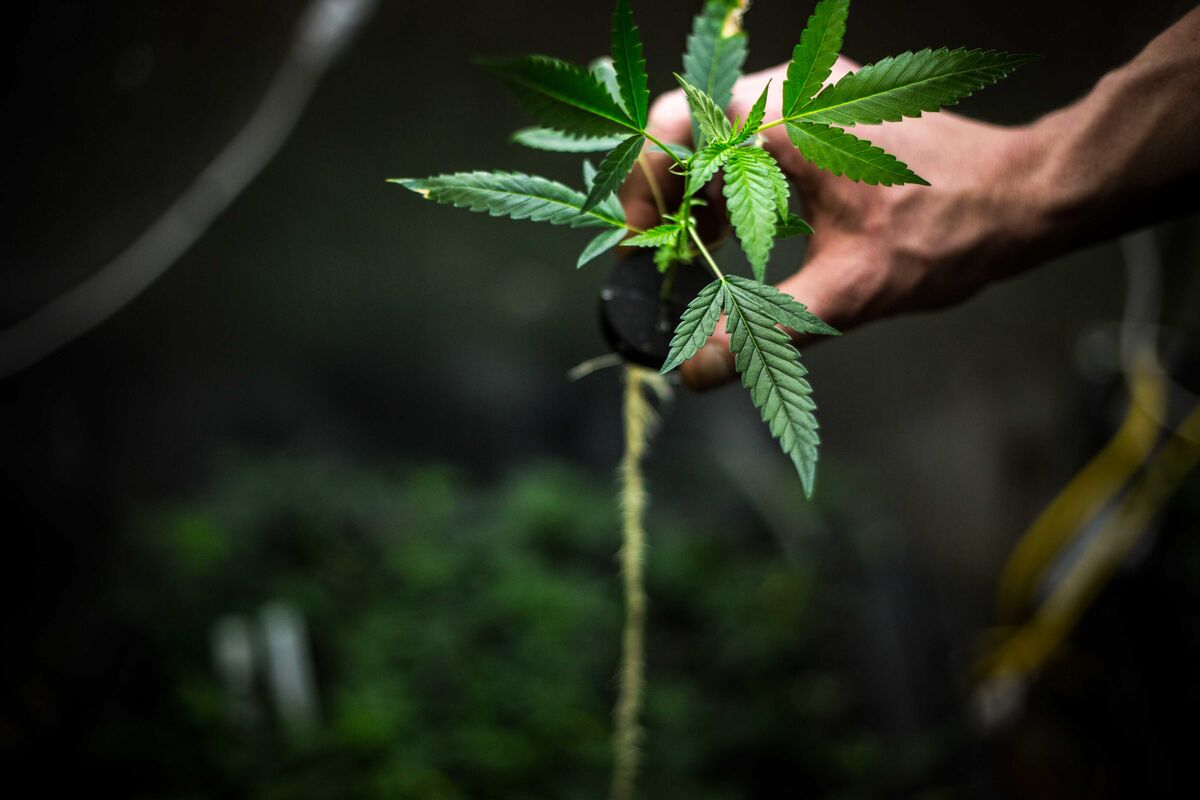 Whether they’re shopping for cannabis gummies or a silk shirt, consumers are becoming increasingly interested in transparency, according to Minuskin. Is the brand actually operating according to its stated values? Is it eco-friendly, supportive of the local economy, and paying its employees a living wage?
Apparel brand Everlane and salad chain sweetgreen have made transparency a core part of their message, and Minuskin sees this trend as the way of the future for cannabis brands, too. “When I was in sweetgreen the other day, they had a massive list on the wall showing every single ingredient they use mapped to the farm partner it came from,” she said. “We’re looking to do that at ISLAND, as well.” Minuskin aims to soon provide customers with detailed information about the brand’s farm partners, including which products were made using sustainable practices like wind and solar energy.
Chong agrees that brands need to inform and educate, rather than just sell cannabis wrapped up in a colorful box. The packaging, for example, should always explain where and how the product was grown and what its benefits are to the user. “A pretty package is like a first date,” she mused. “It looks great, but once you dig deeper, is there anything behind it? Whatever’s inside had better be as good as that design.”
Ariela Gittlen
Related Stories