6 Artist Homes That Are Dreamy Hideaways 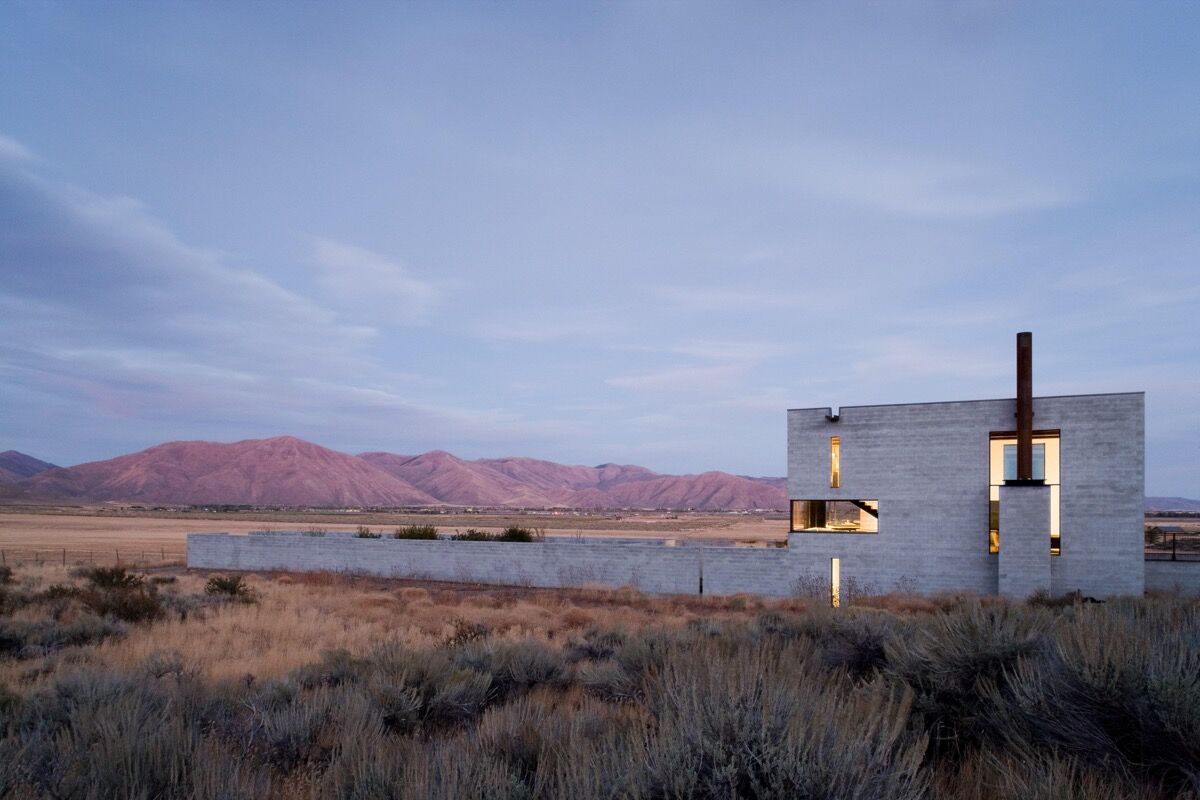 Sometimes, artists just need to get away.
It was 1968, and
Pop-art
pioneer
Robert Rauschenberg
was ready for a break from the hard-partying New York art scene. For years prior, various homes he occupied south of 14th Street—especially a former Catholic orphanage on Lafayette Street, which he’d repurposed as his home and studio—had been hotbeds for raucous gatherings of creatives who got buzzed on Jack Daniels and discussions on the future of painting. But he tired of the late-night lifestyle and the toll it was taking on his body. So that year, after a powwow with a psychic, he bought a home on the small Florida island of Captiva. It was a mere 10.5 miles square, only 1.2 miles of which was habitable land. At the time, it had just one telephone to its name.
In a well-known photo, Rauschenberg stands in front of his beloved Fish House, a tiny, slatted building on stilts that was a later addition to the remote, sand-bordered Captiva property he lived in for over 40 years, until his 2008 death. It was there, with sea lapping under it, where he would go, he once said, “when I have to be absolutely alone, and surrounded by peaceful thoughts.” Captiva soon became Rauschenberg’s primary residence—a retreat where he also made some of his greatest works.
Rauschenberg’s decision to find a place of refuge—and ultimately settle in it—isn’t rare for the artist in need of a moment of calm or unadulterated concentration away from the world’s rowdy, ever-churning art centers.
O’Keeffe
chose rural New Mexico,
Warhol
took his waters from a beachside home in Montauk, and, more recently,
Peter Doig
and
Chris Ofili
escaped London to settle on the tropical isle of Trinidad. Below, we pull back the curtain on several of today’s artists’ retreats—from a secluded, minimalist mecca conceived by Swiss artist
Not Vital
to a hand-hewn, floating home built by self-sufficient Canadian couple Catherine King and Wayne Adams. Together, they make us want to fly the urban coop and find inspiration in seclusion, to say the least. 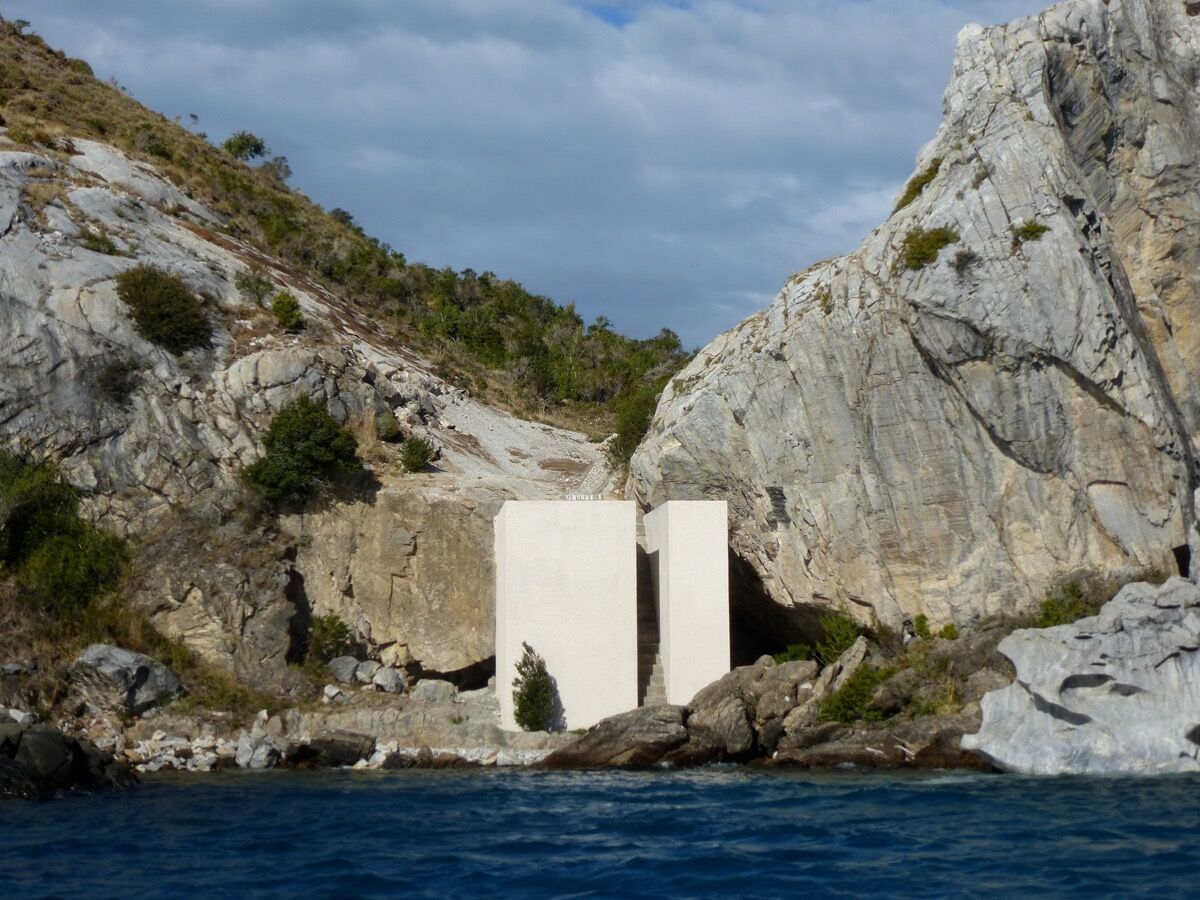 Photo courtesy of Not Vital.

Swiss sculptor, designer, and adventurer Not Vital has a reputation for disappearing. His home in the Swiss Alps descends into the ground with the push of a button—James Bond-style—leaving only its grass roof visible to passersby. This residence brims with his own art, the work of others, and often hosts his crew of creative friends. But in 2008, when he heard about a small island up for sale in the middle of Patagonia’s Lake General Carrera, he jumped at the opportunity to realize a true retreat—a space for solitude and contemplation of the earth that surrounds him.
Like the artist’s Swiss home, his island of NotOna (2009), as he’s named it, is part artwork, part abode. From the bedrock of the small land mass, he carved a tunnel from end to end. One entrance was placed strategically for sunset-gazing, and from the rock removed for the tunnel, he created a striking, albeit subtle, minimalist entrance—the only marker on the island of his existence. “No sound, no noise, no smell, no phone. The womb of the earth,” he’s said of the home. “Since childhood I wanted to enter the world, the stone, to be inside, to be protected and see the world from within. The surface was not enough for me it seems. Maybe that’s why I wanted to be a sculptor after all.” When on the island, Not Vital sleeps on a mattress covered in a sleeping bag; his entertainment, and well of inspiration, is the cerulean water of the surrounding lake and the brilliant sunsets he watches from his clandestine perch.

Adams, a sculptor, and King, a dancer, artist, writer, and musician, decided to leave the the Vancouver Island town of Tofino in 1991 and build their own home. The self-made complex, which is completely off the grid and floating in a remote ocean inlet, now hosts their home, a lighthouse for guests, a dance floor, an art studio, and four greenhouses (where King grows most of their food; Adams fishes in the fruitful surrounding waters for the rest). “I was hoping to make a lot more money as an artist, so subsistence living was our only opportunity to have anything as artists,” Adams has said. “We could never buy real estate, so we had to make our own. It was a great opportunity, to actually move away from the city, to see if we could prosper out here. Now, 24 years later, we’re still doing it.”
For the couple, the home is a labor of love that allows them the freedom to make their work, without the financial constraints of living a city. Their rural surroundings also serve as fodder for their respective practices. “Living in the wilderness is constant inspiration,” King has explained. “It’s so incredible to wake up every morning and see all of this.” Indeed the floating home, which is painted almost completely blue and magenta and looks equal parts fairy-tale village and back-woods tree fort, is enveloped by a lush cove trimmed with tall, green pines—untouched save for King and Adams’s own intervention.

Two summers ago, pioneering video artist
Jonas
filled the Venice Biennale’s United States pavilion with They Come to Us Without a Word (2015), an ethereal installation of mystical forms and footage. It turns out that the mesmerizing work, which received rave reviews by critics and an honorable mention from the Biennale commission, was in large part inspired by (and filmed in) her very own place of retreat: the verdant island of Cape Breton, Nova Scotia. Jonas has called it her summer home since 1970, when she first set foot there with Philip Glass and
Richard Serra
, who also became regulars.
It was the beautiful landscape and the remote location that first grabbed hold of Jonas, but quickly, the island’s culture also became important to the artist and her work. “When I started going there in 1970, there were still these old people there who had a link to the past, who still spoke Gaelic, who were superstitious in ways that were familiar to me because of my interest in folktales and fairy tales from Irish and Scottish traditions,” Jonas has explained. “It’s a place full of stories and folklore—and fiddle playing! Many aspects of the culture immediately spoke to me.” Jonas, whose work layers myths and rituals, both the real and the imagined, still frequents her Cape Breton getaway, drawing fodder from its stark coastlines and local storytellers all the while. 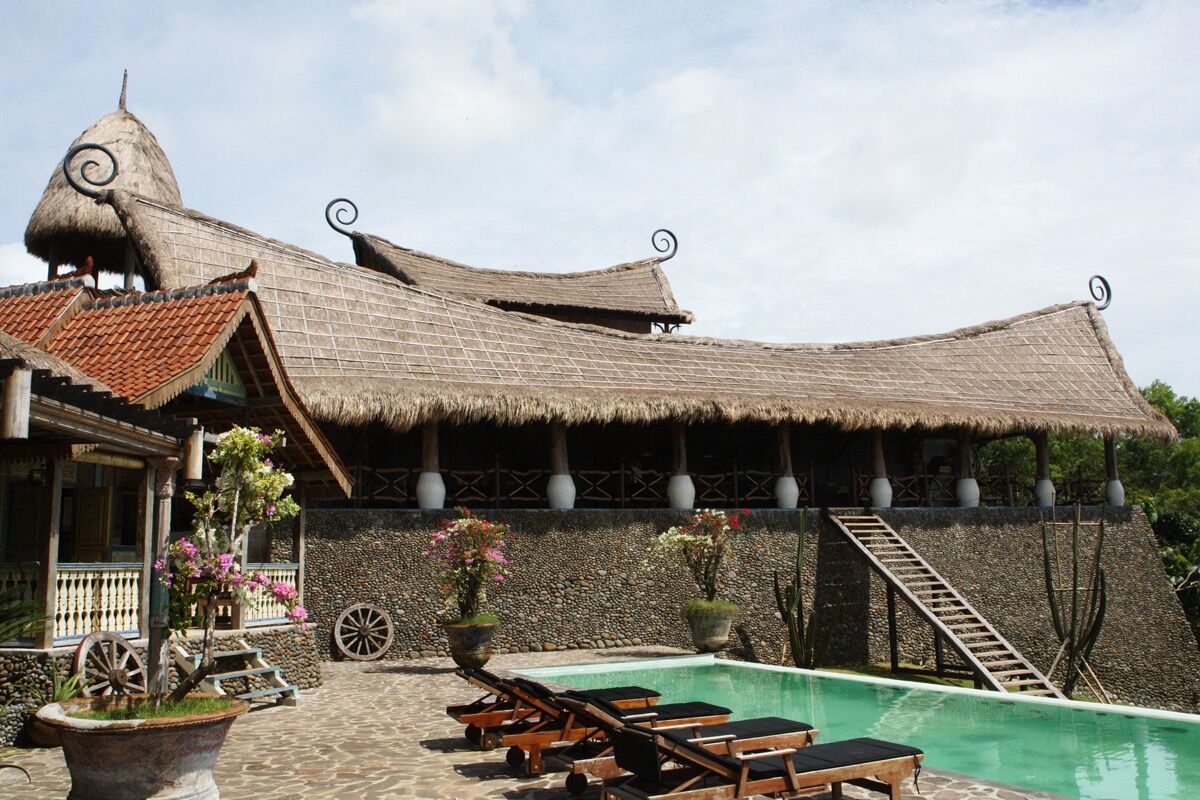 Advertisement
Bickerton
made a name for himself during the 1980s New York art boom as a leading member of the
Neo-Geo
movement, along with
Jeff Koons
and
Peter Halley
. But as Neo-Geo’s star waned, the idea of leaving New York grew on the painter, who had grown up traveling the world with two itinerant parents (as a family, they rarely lived anywhere for more than two years). “New York was, much as it was one of the greatest learning experiences of my life, really set up and circumscribed the rest of my life that’s followed,” Bickerton has explained. “There was a limit on how long I could take it, and I had to go.”
In the 1990s, the painter and sculptor ended up in Bali, as far away from New York as he could get, even if unconsciously. “If you took an orange and stuck a pin through it in New York, it would come out just south of Bali,” he continued. “I don’t know if that was intentional or not, but geographically, I could not be farther away.” The Indonesian island has been his home and housed his studio ever since. There, under a traditional Balinese thatched roof, ornamented with whimsical flourishes, he makes his signature dystopic, surreal paintings of dazed-out island bums and wild-eyed enchantresses—characters inspired by his island escape. 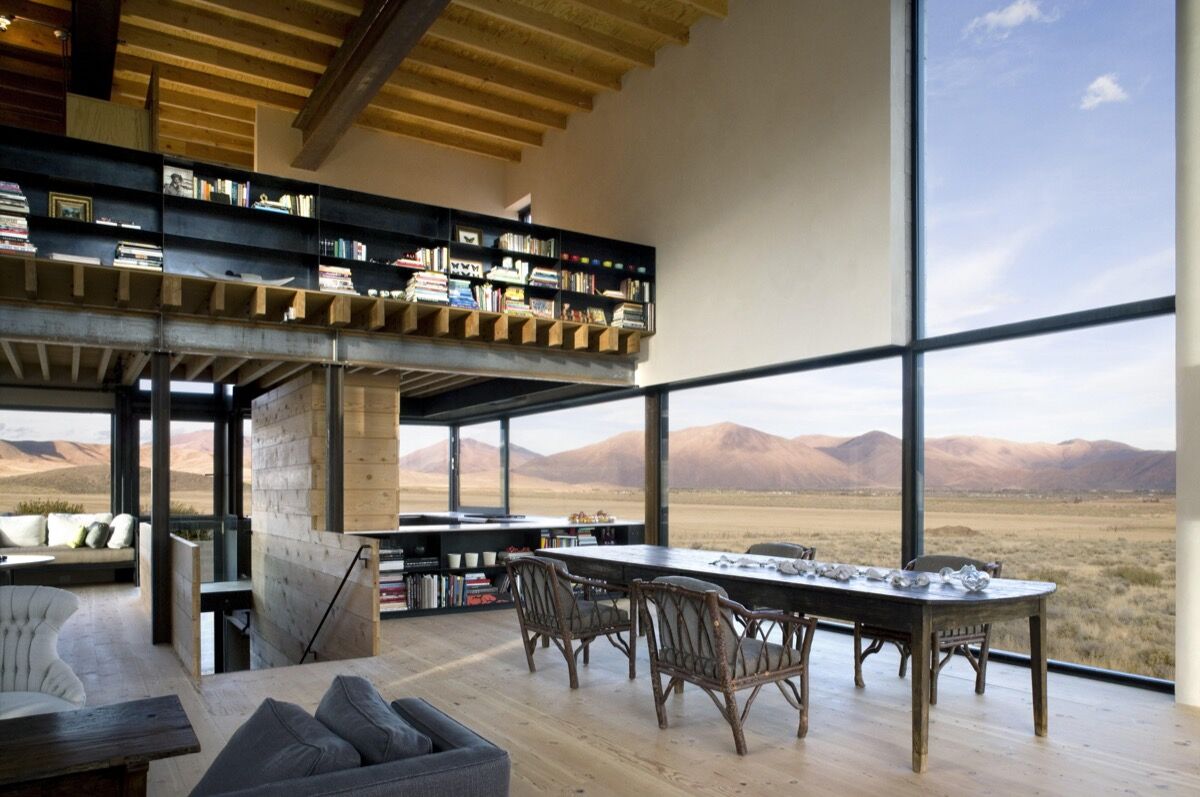 Cox, an artist and designer working in metal, glass, photography, and video, had grown up all across the Pacific Northwest. But as an adult, after moving to Ketchum, Idaho, she desired even more remove. That’s when Cox began to hatch a plan to build a home in Southern Idaho’s high desert, far from even the state’s small towns. After almost a decade of tweaking the design with architect Tom Kundig, Cox settled into the house in 2008.
The small, minimalist structure—which triples as living quarters, studio, and sculpture garden—was forged primarily from organic, unaltered materials. “A premise of the house is that as many materials as possible were used in their direct, immediate form,” Cox has said. She saw the space as a sanctuary where art—and not only her own—could live, breathe, and interact with the surrounding desert landscape, which can be seen through large windows from almost every corner of the home. To that end, in addition to filling the home with her own work, she commissioned artist and designer friends to contribute elements like silverware and other functional embellishments. While the house was put up for sale last year, it lives on as a creative oasis.

“I liked the heat, I liked the old houses, and it seemed like the closest place that you could feel really far away from the States that I could find,” explained contemporary sculptor and installation artist
Pardo
of his home in Mérida, Mexico. He first visited the city while on honeymoon in 2000, and traveled back often thereafter; in 2003, he worked on a commission for Haunch of Venison there, a space that was at once artwork and abode. He came to feel so comfortable in the city, that he eventually moved there for good. The white stucco structure, in Mérida’s historic center, is covered in potted succulents and palms and accented with Pardo’s own signature light fixtures, and patterned tiles that look as if they could make their way seamlessly into one of the exuberant, kaleidoscopic installations the artist has become known for.
But the space, more than brainstorm hive or an art gallery, is a home for Pardo and his partner
Milena Muzquiz
; even their studios are situated outside of its walls. And its most important quality is its distance from busy art hubs (the closest being L.A., where Pardo also has a home). “There’s nothing about the art world around us here; there’s nothing to do with fashion; there’s nothing up to speed in the contemporary world,” Pardo has said. “I don’t like the idea of living in an important house.” For Pardo, a separation between work and life is paramount.
Alexxa Gotthardt
Related Stories