6 Emerging Artists to Discover at Liste

Nate Freeman
Jun 11, 2018 12:58pm
Liste, the fair spotlighting young galleries that runs concurrent to Art Basel in Basel, Switzerland, opened Monday to VIPs, and collectors braved the pouring rain to see work on offer from 79 galleries from around the world. The fair is housed in a sprawling old brewery, with booths taking up hallways and odd crannies, creating a unique way to discover new artists a day before the main fair opens across town on Tuesday.
Here are six artists that caught our eye during the fair’s opening hours. 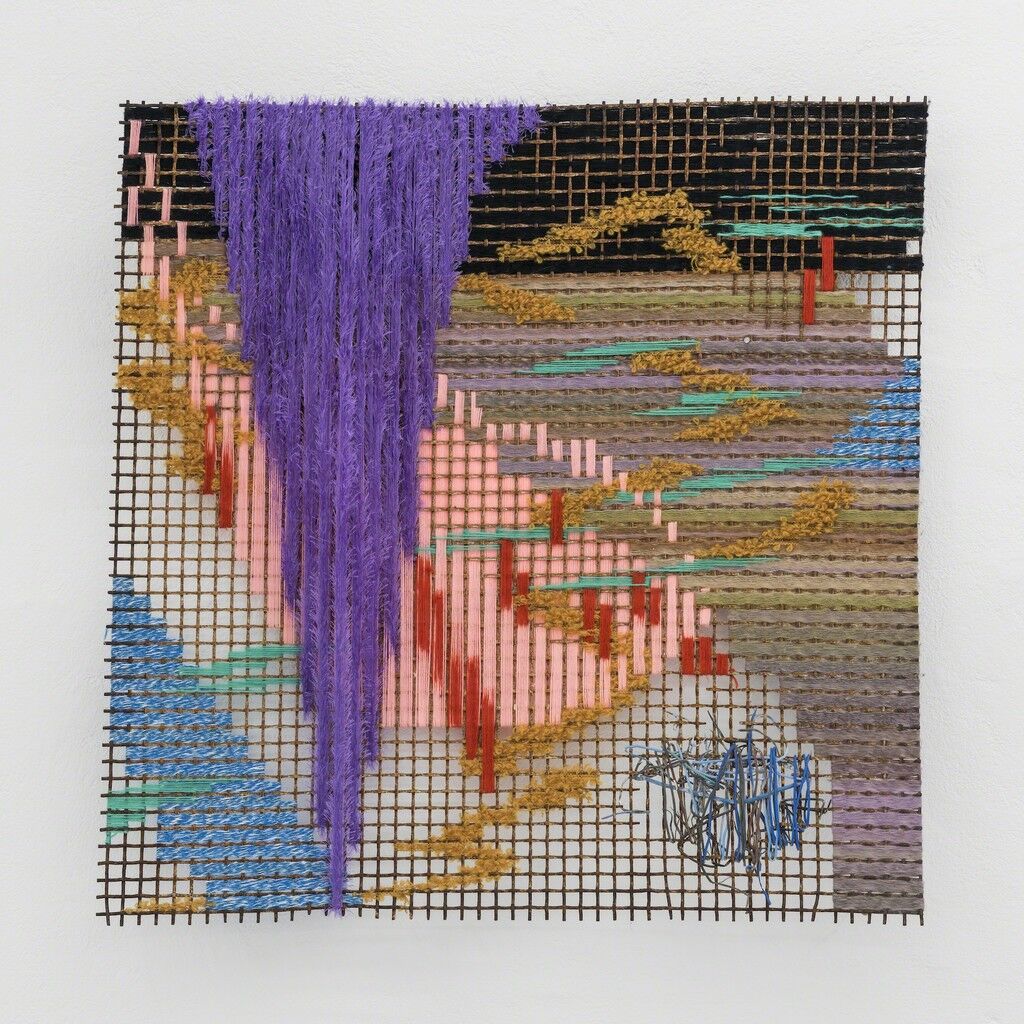 Zoë Paul
Untitled, 2017
The Breeder
Before Liste opens, there is always a raucous block party in the street outside the fair, with ample canapes of jamon serrano and fresh parmesan on bits of bread. During the melee, a friend introduced me to the Athens-based artist Zoë Paul. She said her work at the fair was a fountain sculpture, something she’s been drawn to lately—perhaps, she mused, because she’s an Aquarius.
The piece in question is installed at the booth of The Breeder, which is flanked on two sides by floor-to-ceiling windows doors with a view of a park. Amplifying the floral feel is Paul’s elegant and somewhat creepy fountain work installed at the center: water bubbles out of a head, next to a long white severed leg, next to an iron rod stuck into a rock, all partially submerged in the shallow water. Outside of the pool lies a statue’s disembodied arm. A director at The Breeder explained that the untitled work was shown earlier this year at SALTS, a nonprofit kunstverein in a former butcher shop on the outskirts of Basel, in a show that showcased “a certain cultural landscape, where historical signifiers are superimposed with contemporary commentaries.” Indeed, Paul evokes the Greek ruins that are still speckled through the city where she lives and works.

B. 1987, San Francisco, California. Lives and works in Los Angeles. 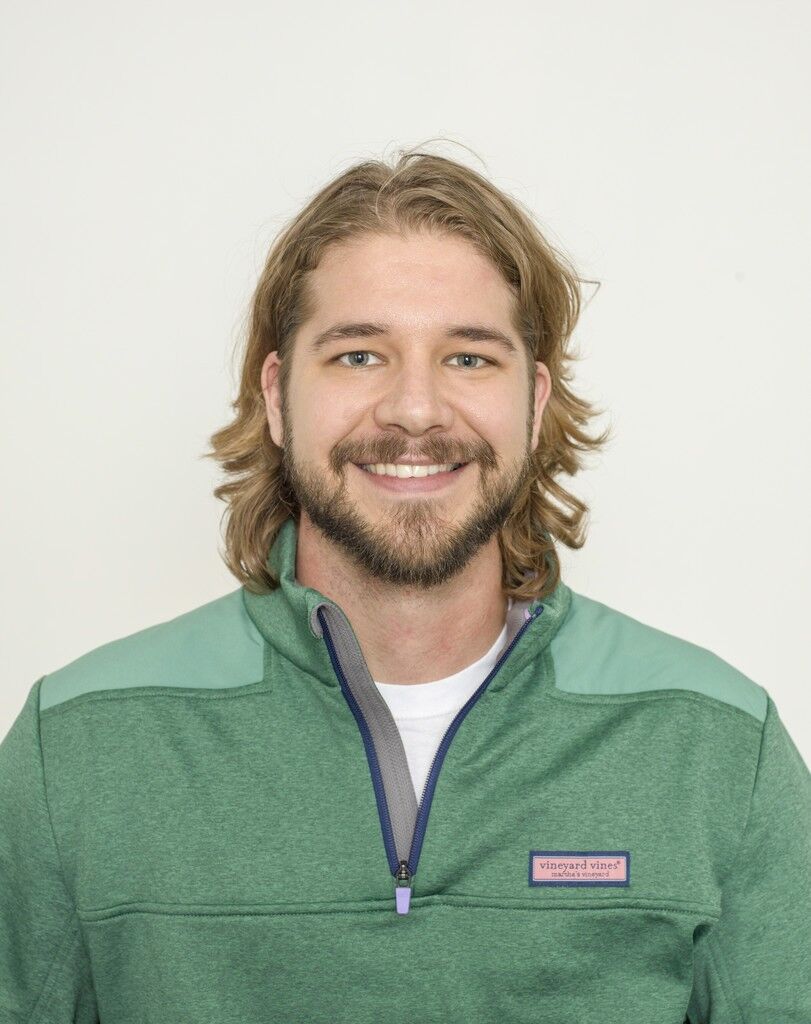 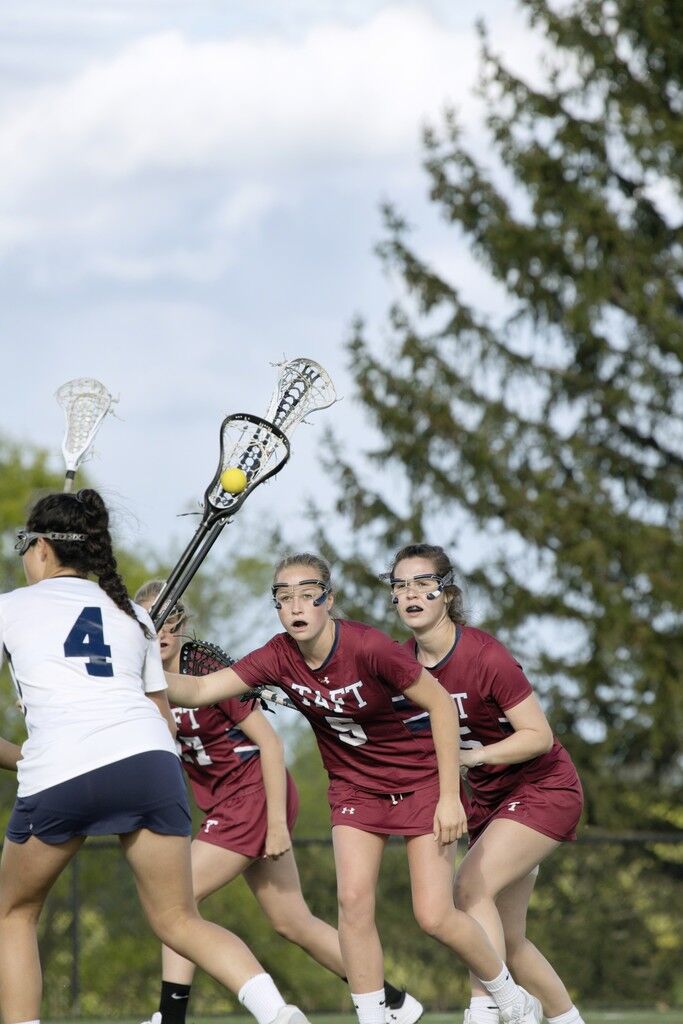 Buck Ellison
Hotchkiss vs Taft #8, 2018
Balice Hertling
Advertisement
I did not expect a series of five photographic portraits of a scruffy man wearing different Vineyard Vines fleeces to be one of the more arresting works at Liste. But the Los Angeles-based artist Buck Ellison mines the weirdness of WASP culture to delirious effect at the booth of Paris outfit Balice Hertling, where Fleeces (2018), the suite of images featuring the same bro wearing fleeces in uber-preppy shades—which have slightly nonsensical names such as “spinnaker,” “deep bay,” and “starboard green”—drew crowds throughout the morning.
And it’s clear Ellison is after more than just an aesthetic surprise. A wall text explains that he was drawn to Vineyard Vines for the contradiction inherent in its mission statement: that the founders wanted to give up their corporate jobs and “start making neckties so they didn’t have to wear them,” to earn enough money so that they didn’t have to put on the monkey suit anymore and could just go boating. “This mental displacement of labor of men in finance or law toward whimsical pursuits (fishing, sailing, drinking) was extremely interesting to me,” Ellison wrote in the text. Fleeces is paired with another photograph of perhaps the Mount Olympus of prepdom—a Hotchkiss vs. Taft lacrosse match—but, in the text, Ellison notes that New Englanders stole the sport from Native Americans. There will surely be a surfeit of painting at Art Basel on Tuesday, but work in the medium is less ubiquitous in the more experimental, media-diverse Liste landscape. And yet, the large canvases of Satoshi Kojima at the booth of Bridget Donahue stood out: fragmented portraits in glorious pastel tones, fresh from the artist’s Düsseldorf studio. Kojima came from Tokyo to the German city to study at the Kunstakademie Düsseldorf with
Peter Doig
and became one of the artist’s favorite students, Donahue said. That led to a collaboration last summer between Donahue’s gallery and Tramps, the London space housed in Doig’s former studio, and the partnership has proven to be fruitful: Several works by Kojima had already sold for around $12,000 each—a deal, as it’s certainly some of the more exhilarating work at the fair. 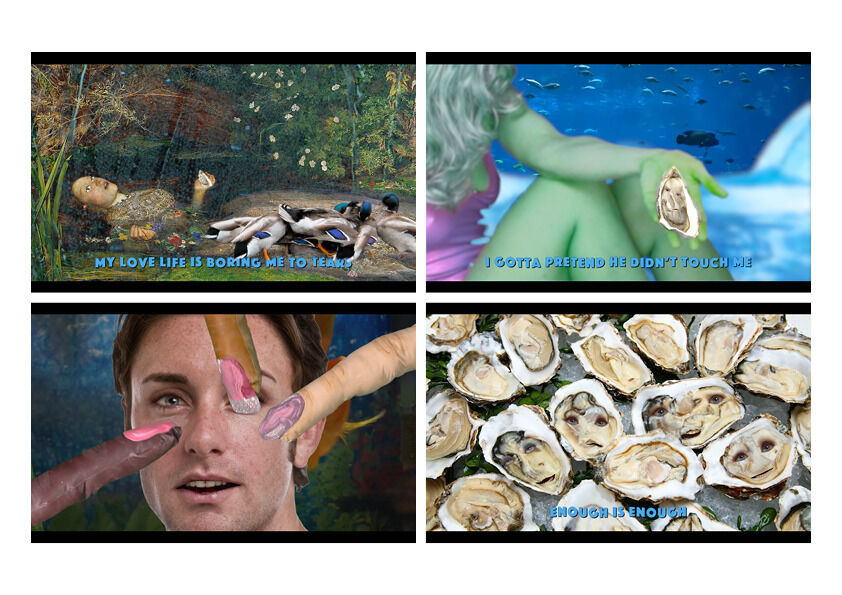 Puck Verkade
Bait, 2018
Dürst Britt & Mayhew
On a video screen installed on a series of iron bars strewn with yellow sheets, a strange narrative begins to emerge involving sea creatures, animated figures, disco music, and, above all else, oysters. This is Puck Verkade’s BAIT (2018), which she made specifically for the fair; the work had a line of VIPs clamoring to put on the headphones and dive in. Again and again, large fleshy oysters are pried opened and shucked, and sometimes sprout mouths, as the classic Donna Summer/Barbra Streisand duet “No More Tears (Enough is Enough)” fades in and out.
The fantastical vision is actually a obscure comment on the #MeToo movement. Verkade excitedly explained to me that the work touches upon the topic in a serious way, without taking itself too seriously. “The oyster has many connotations, from art history to sexuality to gender,” she said. And so she decided to give the oysters mouths. “The oyster is the perfect representative of something or someone being oppressed,” Verkade explained—but her shellfish are able to “speak up about harassment.” You have to see this to believe it. 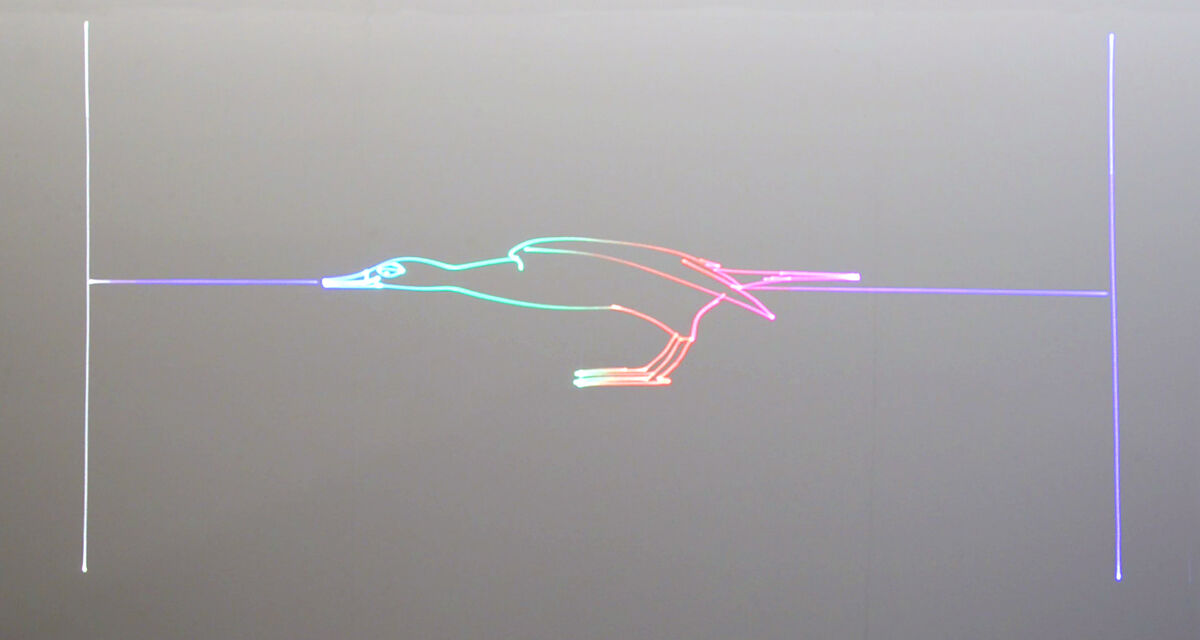 Laser beams danced on the wall of the booth of Paris gallery High Art. As I got closer, they coalesced into an image of a bird twirling horizontally on an axis, as if roasting on a spit. This is a 2017 work by London-based artist Matt Copson, his first foray into this sort of projection. An hour into the fair, the work had attracted a crowd, which included Swiss Institute director Simon Castets (a fan of the artist, he conducted an interview with Copson alongside Hans Ulrich Obrist for a package in Kaleidoscope magazine that focused on artists born in or after 1989).
Make sure not to miss the sonic element. Don a set of headphones and you’ll hear industrial gurgles and what might be the voice of the bird itself, though it was so processed it was hard to hear. I could make out “I’m gonna live forever,” “There is no sophistication,” and something else about curators and bombs and the future. High Art’s Philippe Joppin told me that it had to do with an English fairy tale about a bird and a fox talking about how to understand humans. Purchase the work—it’s for sale for €20,000, in an edition of five—and it will all make perfect sense. 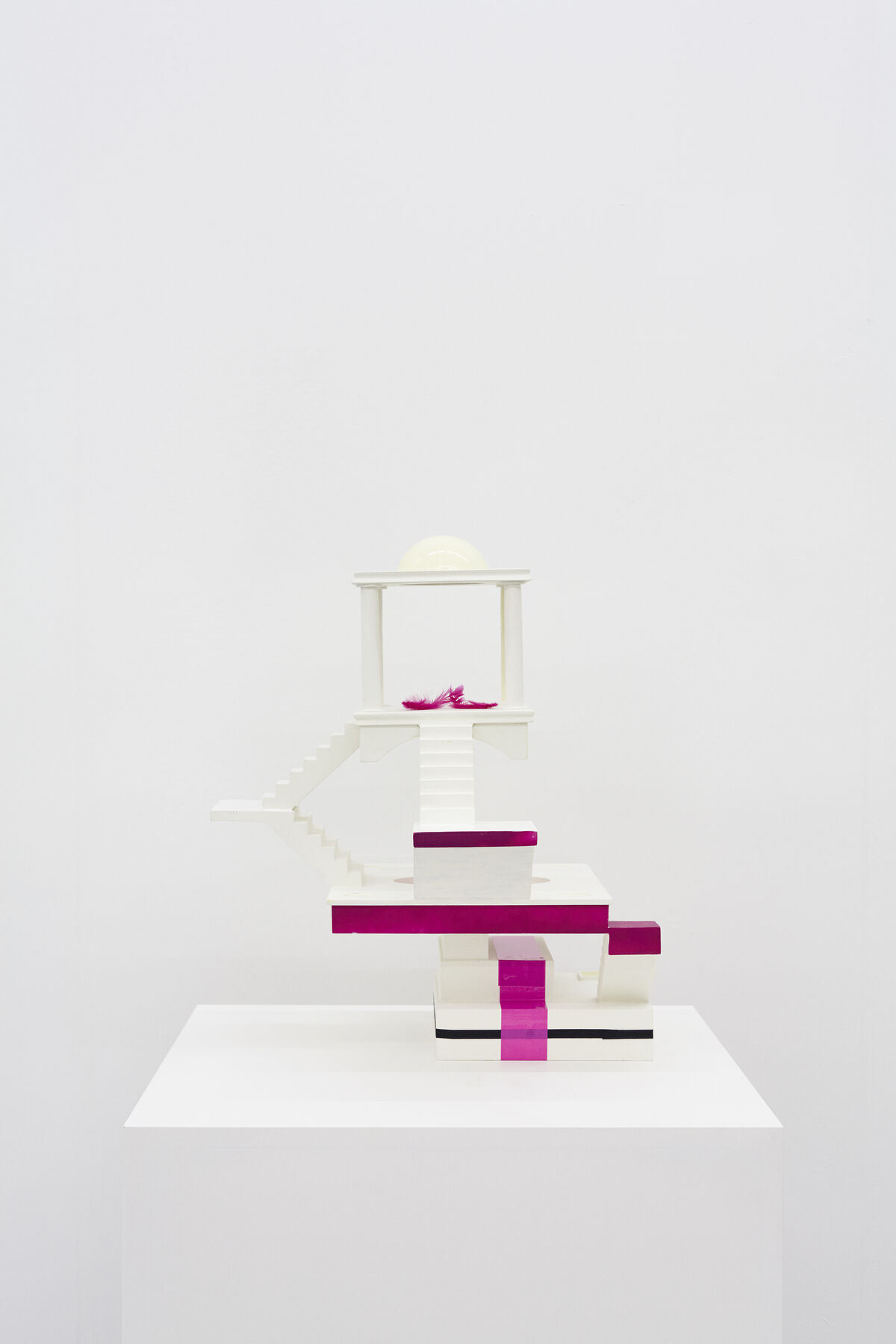 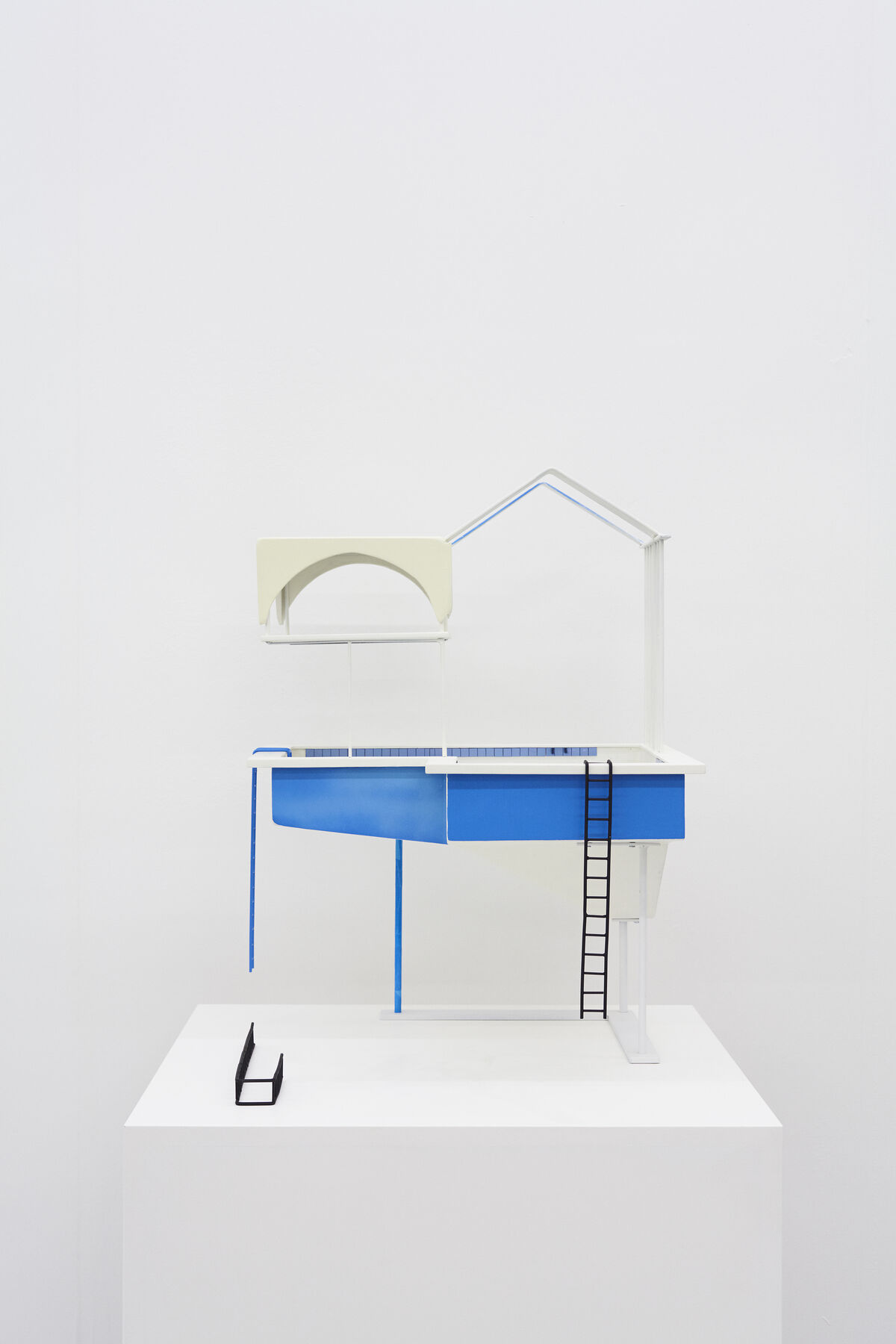 A flier stacked by the booths of Park View / Paul Soto spun a ripping tale of a 200-year-old spa in Buenos Aires, featuring Carrera marble pools and cedar-lined locker rooms, once frequented by
Marcel Duchamp
and supposedly mentioned in Jorge Luis Borges’s famous short story “The Aleph.” The property can be yours, the flier said, for $2.8 million. I became slightly skeptical when I noticed the name of this historic bathhouse, the Colmegna Spa, was the same as the artist, Victoria Colmegna, who had a solo booth at the gallery.
“She likes to play around with fictions,” said Paul Soto. Nothing wrong with that—Borges certainly did the same. And the accompanying work on view had the same mysterious quality. They were models for bathhouses built of wood and steel, with funky designs; one recalled the sloping swirl of the Guggenheim Museum in New York. The aesthetic, Soto said, came from Colmegna rewatching the 1995 film Clueless and getting really into sunny L.A. pool houses and pom-pom accessorizing. But he added that the artist—who studied with
Michael Krebber
at the Städelschule in Frankfurt—was also trying to channel
Isa Genzken
and
Mike Kelley
, and explore “the utopian aspect of the bathhouse.” They are for sale for €7,000. Meanwhile, Borges doesn’t appear to mention a spa in “The Aleph,” but there actually is a Colmegna Spa in Buenos Aires. The mystery continues.
Nate Freeman
Related Stories