Artsy Editors
May 4, 2018 4:12pm
Over the last decade, photography has played a powerful role in expanding Western perceptions of Africa and its diaspora. In tandem, the female gaze has continued to challenge and redefine narratives relating to identity and representation in photography. A new group show by Red Hook Labs and the magazine Nataal—“New African Photography III,” the third chapter in their renowned co-curated series of exhibitions that have been supported by the 1-54 Contemporary African Art Fair—brings together work by six female artists whose photography conveys new perspectives and narratives relating to present-day Africa and its diaspora. Artsy asked each of the artists to share the backstory of a particular photograph they’ll be showing, and to consider how their photography challenges misconceptions about Africa or preconceived ideas about the world. “This is an image of some of the girls from the Dr Van der Ross Primary drum majorettes team, known as ‘drummies’,” says Alice Mann, a South African artist currently based in London. “At the point the photo was taken, I had just started working with the team; I think this was my second visit to the school. Morisha, their coach, was showing me where they practiced. They were practicing some dancing moves. They are natural performers, and as a photographer, it was amazing to work with them. For me, this is an image that represents the beauty and innocence of these girls. I think it’s important to be aware of their circumstances. Many of them come from very disadvantaged homes, and they face many challenges in their lives. But for me, the pleasure that being in the ‘drummies’ teams gives them is encapsulated in this image. They are not defined by their circumstances.
“Photography has a long and complex history on the African continent. I feel that often there is a trend of reduction in the representation of African subjects: People are not portrayed in a way that expresses their agency or individuality. As a white South African photographer, I try to be very aware of my position, and I am constantly re-assessing the implications of my whiteness in relation to the people I photograph. I believe that images can be an empowering force, and I aim to explore notions of picture-making as an act of collaboration between photographer and subject. I try to present viewers with images that are reflective of the way people see themselves, that highlight my subjects’ dignity and confidence.
“I usually work over an extended period of time to create my image series, which helps create a deeper engagement with the people I photograph. So for me, it’s about using my awareness of my own position, and trying to engage deeply and meaningfully with my subjects in order to create nuanced narratives that challenge stereotypes.” 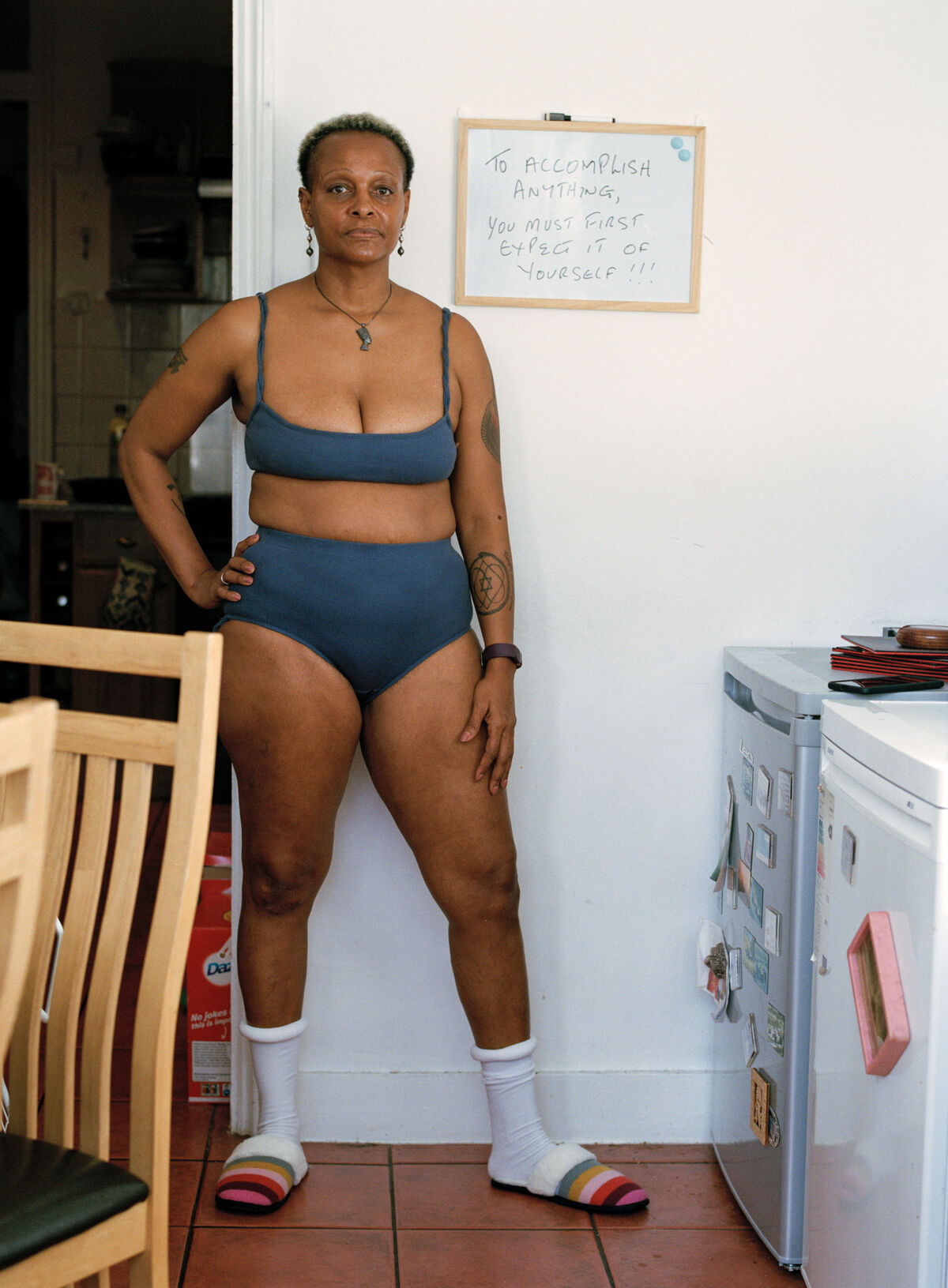 Advertisement
“Since I first started photography, my mum has always been present within my work,” says London-based Ronan McKenzie. “She supports me unconditionally and shows her love in many ways, one of which is her willingness to be part of any project that I decide to do. I find so much strength and power in the confidence and trust my mum instills in me when allowing me to photograph her. In this particular image, I wanted to capture her at home in her own space. She regularly writes inspirational quotes up in her house to reinforce the meanings both to herself and her children, and this one—‘To accomplish anything, you must first expect it of yourself’—summarizes the self-belief that she has always encouraged.
“I want to show, create, and promote a diverse and equal world within my work, especially focusing on race and age. Growing up I hardly ever saw realistic- or complex-enough interpretations of myself as a black British female, or of the multicultural community that I was around every day. When I started taking photos it became even more important to me to showcase the beautiful faces, stories, and personalities of people that I see in a way that is natural and honest to me.” 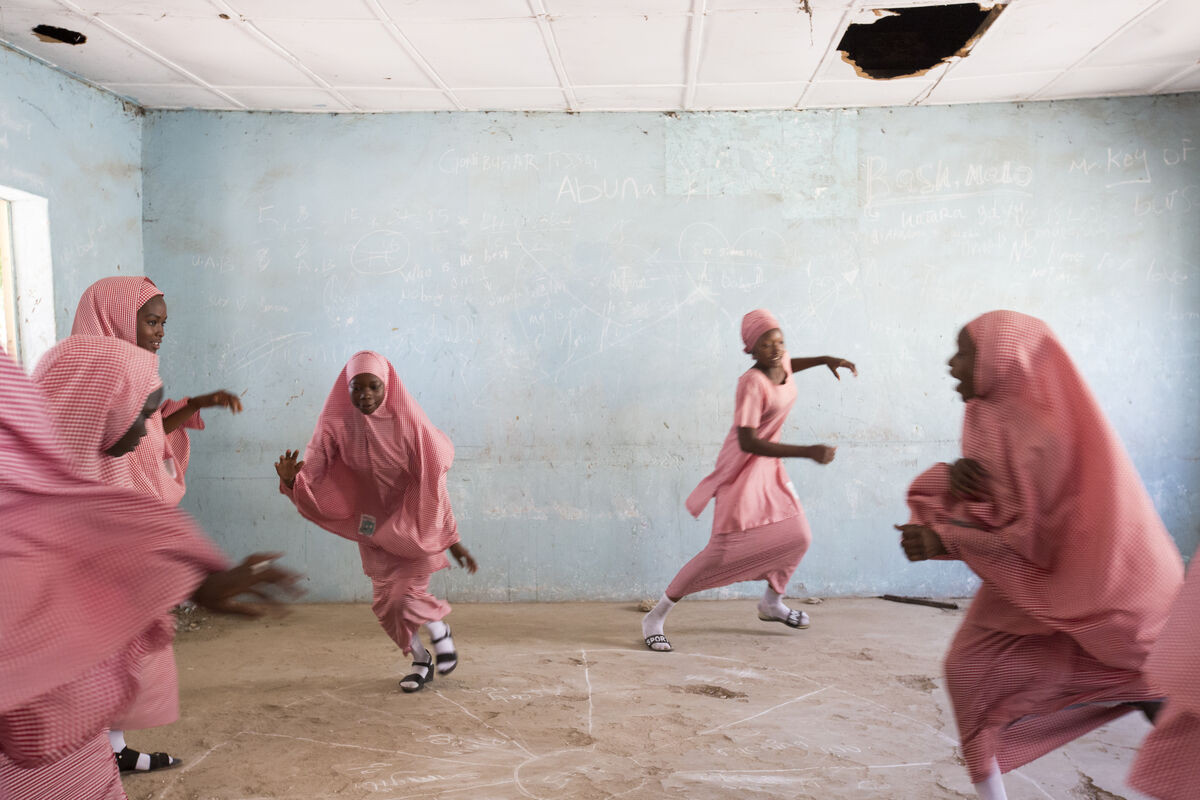 “This image is part of a sequence of six that show students of a Maiduguri secondary school playing a childhood game called ‘In and Out,’” says Rahima Gambo, a Nigerian artist based in Abuja, Nigeria. “In 2013, their school was attacked by Boko Haram, a local insurgent group that has attacked schools and universities in the region. Instead of asking the students about the trauma and horrors they had seen or experienced, I wanted to ask a different set of questions, like ‘What childhood games did you play?’ The images were quite experimental and collaborative, and were intended to create an alternative set of images that said something different about the students’ identity and experiences.
“I think people are going to have their misconceptions about Africa. Africa is like any other subject, it’s the way you approach it. If your intent is to know this region on a superficial level, that is what you will see. The work I make is quite intuitive; I’m creating images from my own specific perspective.” 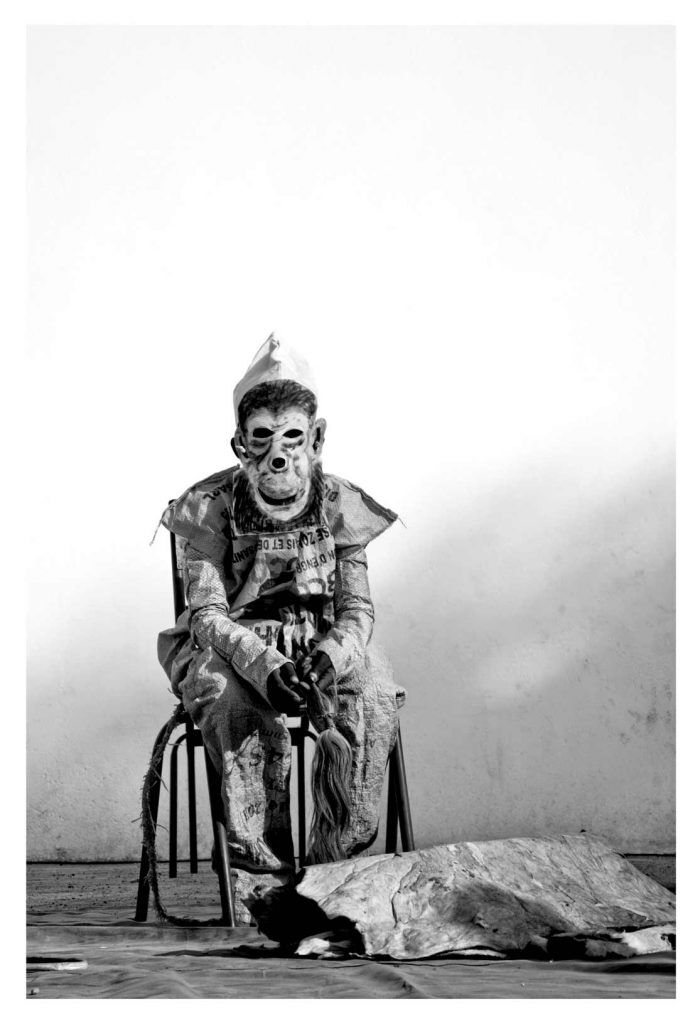 According to Malian artist Fatoumata Diabaté, this photograph pictures children wearing handmade masks, illustrating a particular fairytale. “The story expresses the intellectual spirit of Africa in its own tradition, and speaks of hospitality, peace, wealth, and of the transformation of local materials,” says Diabaté, nodding to the dress one character wears, which is “made from a sack of rice,” accented by a cardboard mask.
“The false ideas are that there is nothing but misery in Africa,” says Diabaté, when asked about common misconceptions surrounding the continent. “First, misery related to famine. One associates Africa too often with images of people who have died of hunger, all while there is flourishing agriculture in Africa. In all the different climates of the continent, the people produce what they need to feed themselves and their families. Or you can go to the market, overflowing with delicious local fruits and vegetables.
“Famine strikes only a small minority of people, who are unfortunately exposed to armed conflicts in their homes and must flee the place where they normally live in peace. For the most part, these conflicts are the result of a problem, linked to a second idea about the misery of Africa—that Africa doesn’t possess any resources. Except it’s not true! Africa is extremely rich in raw materials, such as gas, diamond minerals, gold, silver, and coltan,used for smartphone screens. There are plenty of other resources that wealthy countries desire and seize as they orchestrate armed conflicts in what one can call neocolonialism, so that their populations can then live in the comfort of a consumer society.”
This text has been translated from the original French. 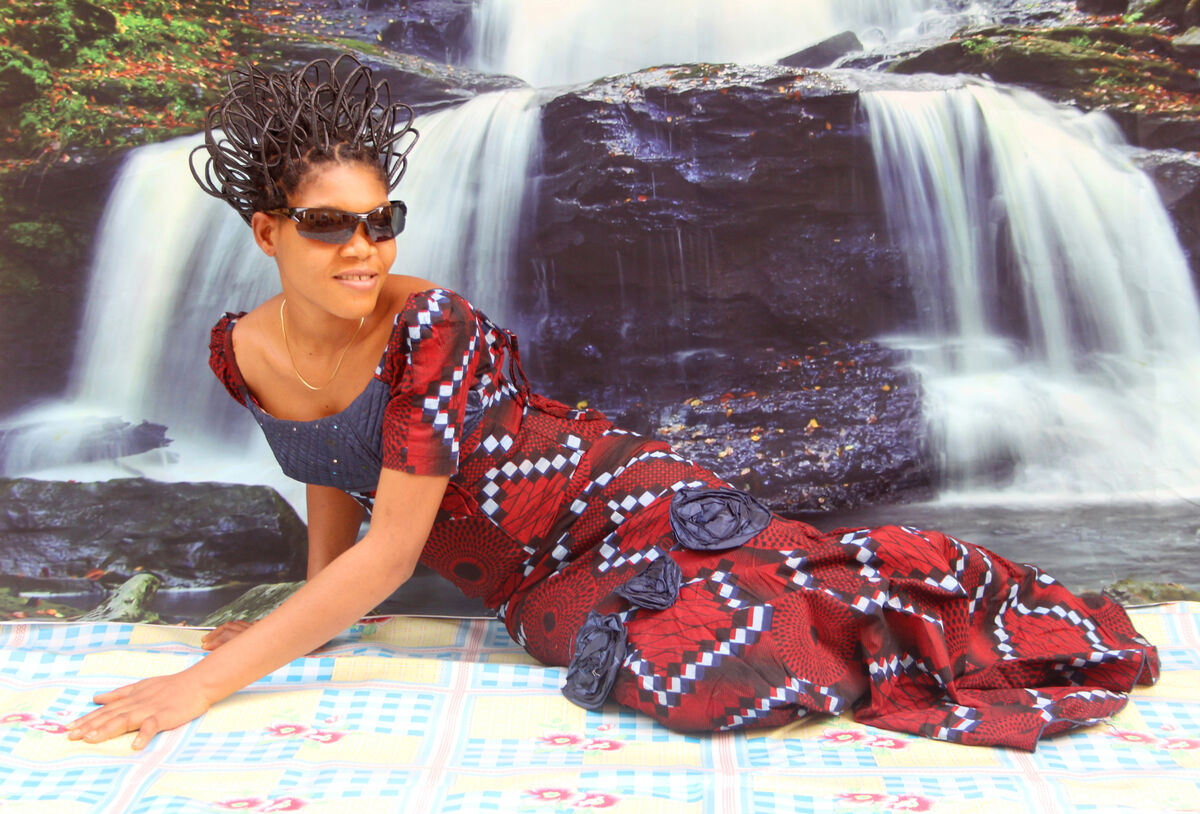 “This photograph is of my cousin Eberechukwu, shot in our compound in Nsukka, Nigeria, in 2017,” says Ruth Ossai, who is currently based in West Yorkshire, U.K. “The image takes inspiration from 19th-century painting, while making it modern and current with our generation. It represents heritage, pride, being playful, strong, and unapologetically Nigerian (Igbo). We were bringing that element of fun that West African photographers have always been about. With my work I try to show texture, depth, and love; the strength, tenacity, and ingenuity of my family and Eastern Nigerians, celebrating identity and giving a visual insight to others.
“The biggest misconception about ‘Africa’ among those who do not live on the continent, I believe, is that the continent is all the same, whether that be politically, economically, socio-culturally. My inspiration for photography comes from everyday life and the people in the southeast of Nigeria. I try to challenge those ideas by representing Nigerians as they are—showing how naturally beautiful we are. I show my subjects how they want to portray themselves—they have control over the way they style themselves, the backdrop, and their poses—giving them power and agency so they can be their true selves. The beauty of photography is it starts a dialogue about who we are as Nigerians, where we come from, and where we are going.” 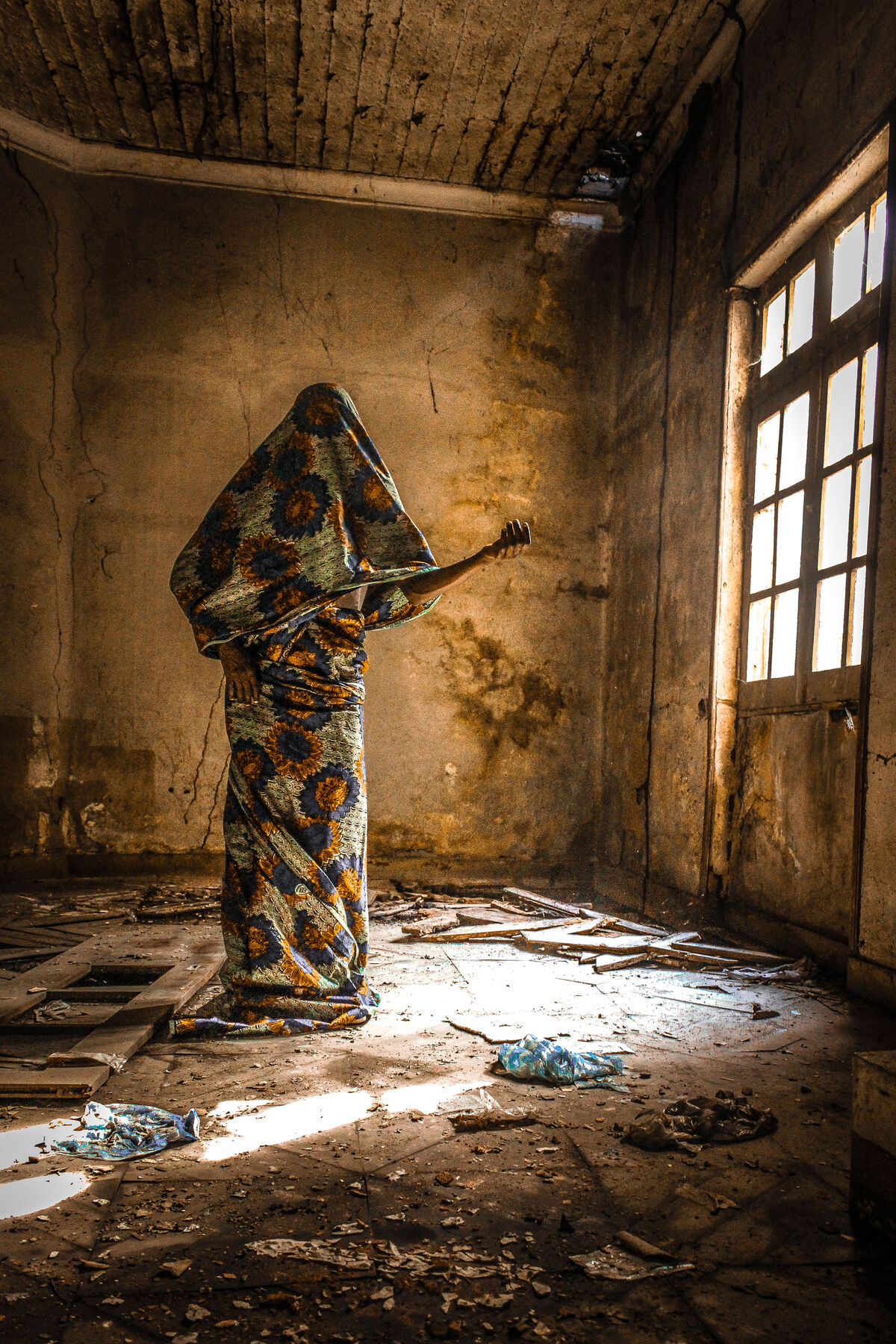 “After finishing at the Royal Academy of Arts, I decided that I do not have to care about my decisions as an artist,” explains Keyezua, who is based in Luanda, Angola. “It felt good to have the freedom to do something without having a certain idea why you were creating it.”
This image, I Am Not A Demon, Who Am I? (2016), was shot in an empty house. It was, the artist says, inspired by the emotional climate of the economic crisis in Angola. “We all started to move around the abandoned house while one man was shouting a tale that we wrote together,” she explains. “We decided to feel angry, we decided to feel desperate. We decided to create the return of hope, and from there, we started to create the images.” The photograph, she continued, was made “around a time when the Angolan crisis started to mentally occupy the mind of the poor and to disturb the peace of the rich. We were all looking for something or someone to bring us hope.”
“I am tired of being just an ‘African’ artist,” she added. “It makes it too easy for people that don’t undress my identity and body of work to misunderstand the weight we carry as creatives and the diversity found in each country and tribe. I can no longer carry this word on my own; it gets too heavy. We need more people to understand what is means to be an African today. Often we are invited to exhibit our ideas, identity, and issues as a single story that represents Africa.
“I keep my stories close to my soul and personal experiences. It starts as a therapy, using the stories and pain of others and myself to talk about things. The more you grow as an artist in Angola and exhibit in various countries, you learn to understand that no image, poetry, sound, or movement can represent Africa as a whole.”
Artsy Editors
Related Stories