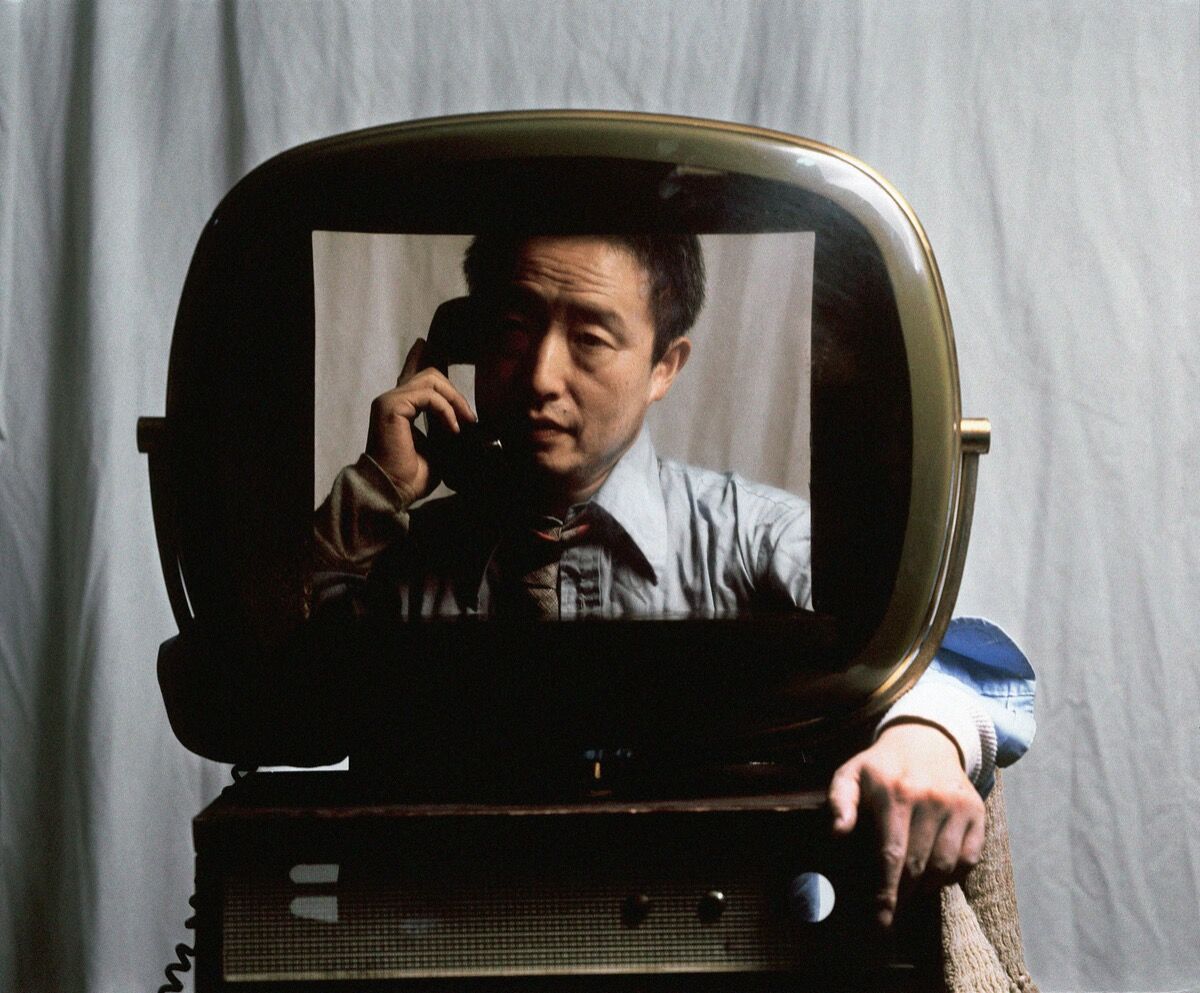 Just after World War II, Magnum Photos emerged as a new type of agency, a collective led by photographers who considered themselves to be both artists and witnesses to world events. Founded by a group that included
Henri Cartier-Bresson
and
Robert Capa
, the photographers who have shot for Magnum Photos not only covered critical documentary and photojournalism assignments, but have taken iconic portraits of famous figures.
A new book, Magnum Artists, published by Laurence King, shows the creative collaborations that have blossomed between the agency’s photographers and their creative contemporaries over the decades. Editor Simon Bainbridge, the editorial director of the British Journal of Photography, sifted through Magnum’s extensive archives to find both well- and lesser-known images of these fruitful photographic encounters.
“All sorts of people have photographed artists over the years,” Bainbridge said, “[but] Magnum photographers brought a gravitas and seriousness of intent that went beyond the usual assignment.” 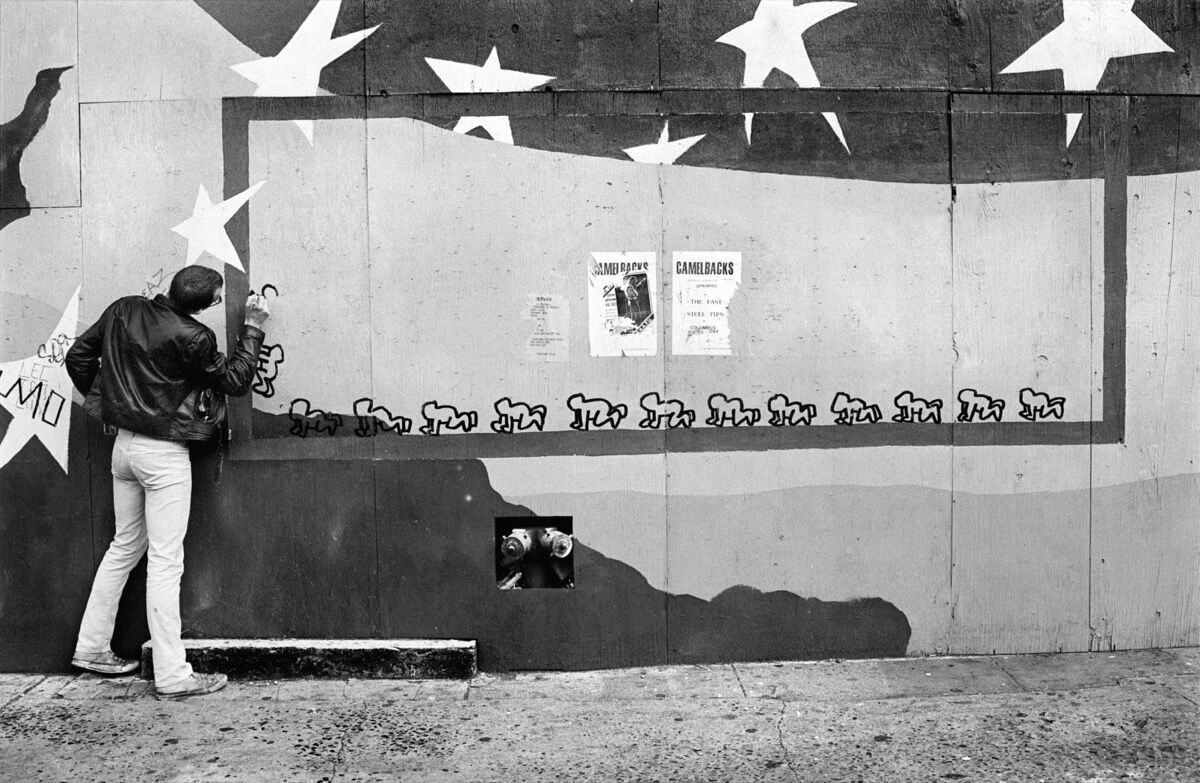 Many of the portraits were not even assignments, he added, but were born from personal relationships between the artists. This includes the decades-long friendship between photographer
Philippe Halsman
and
Salvador Dalí
that resulted in iconic images including In Voluptas Mors (1951), where the famed
Surrealist
appears beside a formation of nude women in the shape of a skull, and Dalí Atomicus (1948), which captures Dalí suspended in the air with his canvases, water, and three flying cats.
“Halsmann didn’t just photograph Dalí’s experiments, but together, they created artworks in their own right,” Bainbridge said. “He pushed Dalí in new directions.”
Looking through these images, which were often shot in studios or personal spaces, one can also see how the artist’s atelier has shifted with the eras, from
Picasso
’s “cavernous, light-filled space” in Paris, as Bainbridge describes, to the New York artist lofts of the 1960s, to the “small factory productions pumping out artworks,” like those of
Anish Kapoor
or
Jeff Koons
.
Here, we highlight six of the collaborations featured in Magnum Artists. 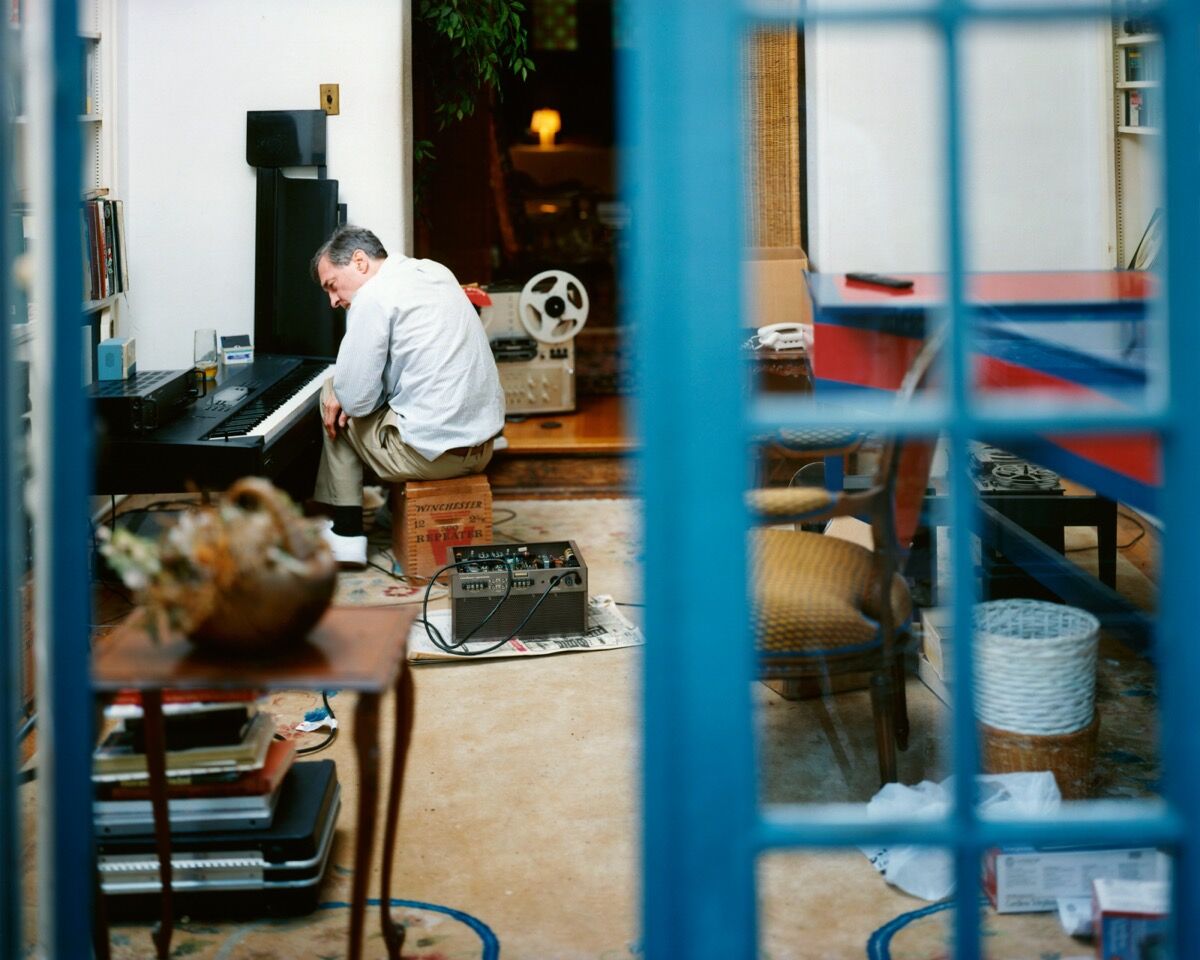 Advertisement
Four years before
Alec Soth
made a name for himself with his career-launching photo book Sleeping by the Mississippi (2004), he was a virtually unknown photographer who wanted to take a portrait of his idol,
William Eggleston
.
Soth showed up at Eggleston’s home hoping for a portrait session, but he found the color photography pioneer—who has long had a reputation of enjoying booze and having a rebellious streak—passed out in front of his house, his wife having locked him out. Soth eventually got his portrait after waking up Eggleston and spending the day with him, but it wasn’t the photograph he intended. After Eggleston’s wife kicked Soth out, he surreptitiously took his idol’s photo through the back door while he hunched over his synthesizer. Fifteen years later, Eggleston’s son asked Soth if he could use the cover for his father’s album of musical compositions.
“The great thing about Magnum photographers is that they meet artists as equals, but here that wasn’t the case: It was Soth going to meet his great hero and then finding said hero unconscious on the lawn,” Bainbridge said. “The final picture is completely different from any other picture in the book in the sense that it’s a stolen moment.” Burt Glinn
’s portrait of Beat artist
Jay DeFeo
was part of a two-decade-long body of work looking at the Beatnik scene on both coasts, from New York loft parties in the 1950s to the sunny counterculture of San Francisco in the 1960s.
Glinn photographed her in front of The Rose (1958–66), DeFeo’s monumental painting that became an eight-year labor of love and what she once called “a marriage between painting and sculpture.”
“[DeFeo] really is kind of known for this singular artwork that we can see in the [portrait],” Bainbridge said. It “became an enigma because it was lost for [so long].”
The Rose weighed nearly a ton from the thick
impasto
DeFeo layered and chiseled and reinforced with wood dowels; it was so colossal that after exhibiting it in 1969, the San Francisco Art Institute stored it behind the wall of a conference room for over 25 years, before it was finally rescued by a curator from the Whitney Museum of American Art. 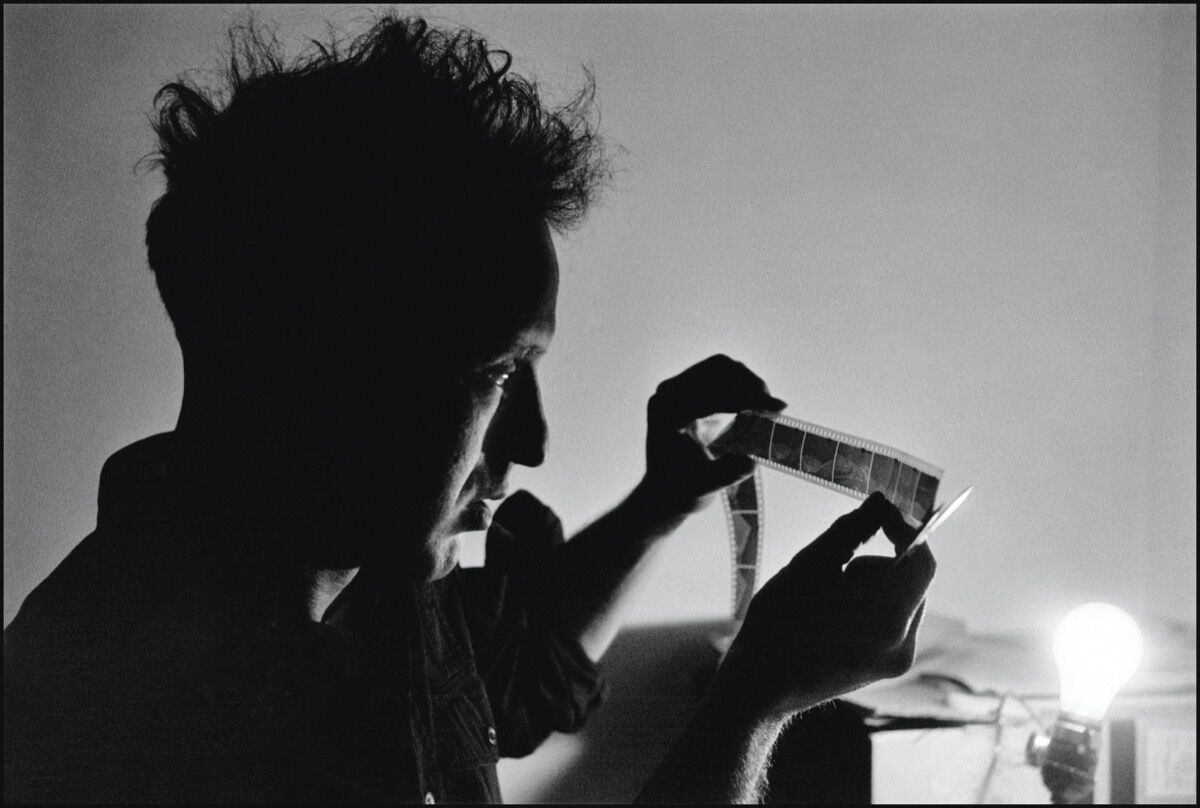 At the end of his two-year road trip for his landmark 1959 book The Americans,
Robert Frank
stayed with
Wayne Miller
in Orinda, California, where Miller took a portrait of the Swiss photographer examining his negatives in front of a single exposed light bulb.
“I was trying to find images often that represented a particular moment in an artist’s career that was formative or important,” Bainbridge explained. “There are numerous images of Robert Frank taken by Magnum photographers, and many of them were friends with him. But Wayne Miller, you know, actually captured him in 1957 looking at what he shot that day [for] his seminal book, and he captured that intensity of Frank as well.”
The Americans was poorly received when it was first published. The images were haunting and intentionally imperfect, as Frank played with grain and exposure to heighten the mood. He recognized the magnitude of the project when he pitched it to the Guggenheim, calling the idea of capturing America in its entirety “an absurdity.” Yet he did so in a neat 83 images—narrowed down from 27,000—in a sequence that became an enduring portrait of the country and a bible to generations of photographers. 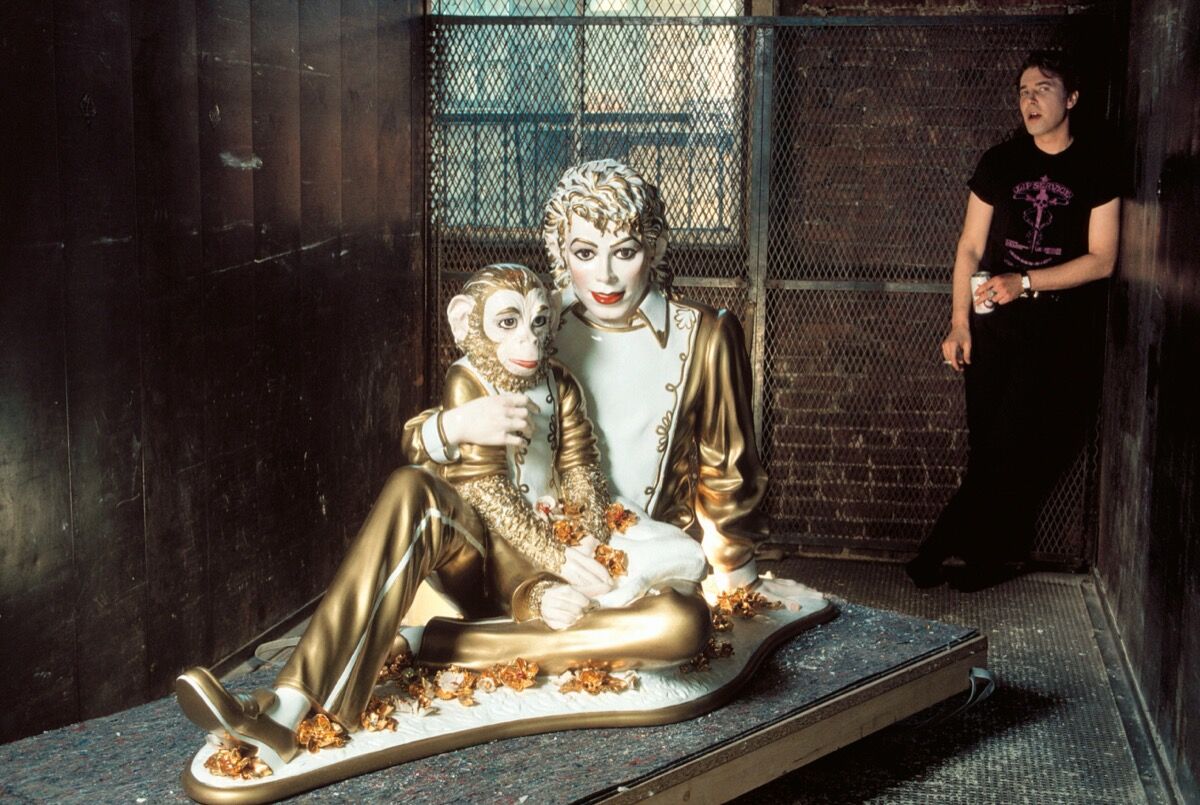 In 1989,
Thomas Hoepker
captured
Jeff Koons
leaning in the corner of a SoHo freight elevator, smoking a cigarette just feet away from his flashy sculpture Michael Jackson and Bubbles (1988), depicting the now-late pop star and his pet chimpanzee.
The photo “has become symbolic of the money and glamour that infiltrated the art scene in the 1980s,” Bainbridge writes in Magnum Artists. Over the phone, he added that the image “captures this new generation of artists, the arrogance, the swagger.”
Koons’s studio is a factory-type setting that produces the artist’s pop culture–inspired works, often in the form of large colorblocked or chrome sculptures. Last year, his silver Rabbit (1986) sold for $91 million at auction, making him the most expensive living artist for a second time. 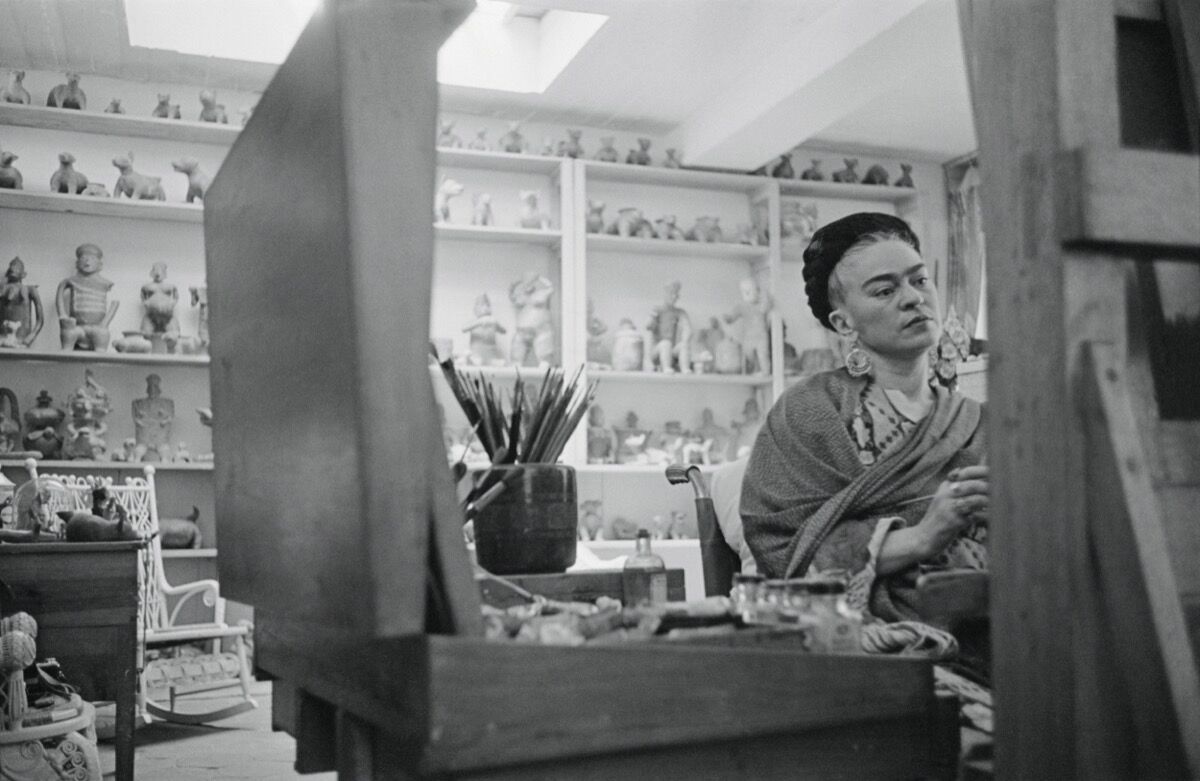 Bainbridge chose this particular photo of
Frida Kahlo
because it was the only one he could find in Magnum’s archive that showed the Mexican Surrealist candidly at work. “So often she was the subject of her own work and her own look was so iconographic that in a way she dominates the pictures of her,” he explained. “So this was a rare example of her intensely at work.”
Nor was it a photo of her in bed, Bainbridge added. Later in life, when her health deteriorated, many pictures show Kahlo painting while propped up on pillows.
Werner Bischof
snapped this photo towards the end of her life as she worked from her wheelchair in Casa Azul, the dual home and studio space in Mexico City that she shared with her husband
Diego Rivera
.
“It was great to find her in this very idiosyncratic space that she created for herself,” Bainbridge said. 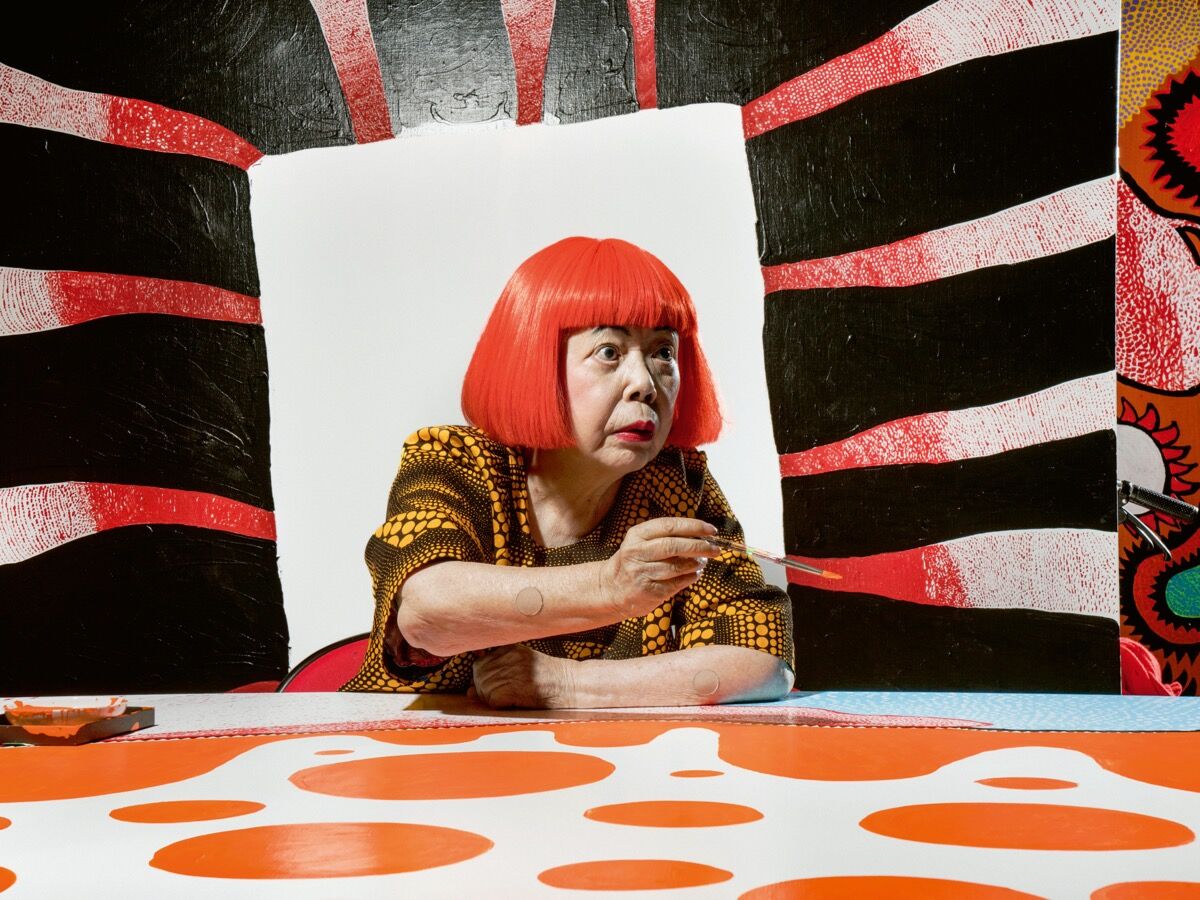 In 2016,
Alex Majoli
paid a visit to
Yayoi Kusama
’s studio in Shinjuku, Tokyo, to photograph her for Time’s annual “100 Most Influential People” feature. “She was natural, fully immersed in her brush, her colors,” Majoli told Time. “She’s been photographed millions of times, but I wanted to capture her unencumbered.”
Bainbridge points to this shoot as an increasingly rare example of photographs taken in artist studios because of the waning number of editorial commissions. In the latter half of the 20th century, during the heyday of magazine publishing, photographers were often sent to spend days with artists and other public figures. Today, celebrity shoots often last mere minutes.
“I think once those assignments started to disappear—once magazines were no longer commissioning photographers to go and spend quality time making work around an artist studio—then it wasn’t necessarily part of the agency’s agenda to photograph the great and the good of the art world,” Bainbridge said.
Jacqui Palumbo is a contributing writer for Artsy Editorial.
Related Stories