Jon Mann
Oct 13, 2017 4:39pm
In 1936,
Dorothea Lange
captured one of the most iconic images in the history of American photography. Documenting the economic ravages of the Great Depression for the U.S. government, her black-and-white photograph, Migrant Mother, depicted a worried but determined woman, dressed in shabby clothes and holding her young children. Though Lange’s photograph communicates the suffering of Depression-era poverty, the young mother would become a symbol of American strength and endurance in the face of unemployment, hunger, and homelessness.
While Lange is one of the most decorated American photographers of the 20th century, her fascinating history has been overshadowed by the popularity of the famous image. Here are six things you might not know about this pioneer of
documentary photography
.

Despite her prolific travels, Lange was a childhood polio survivor and walked with a limp 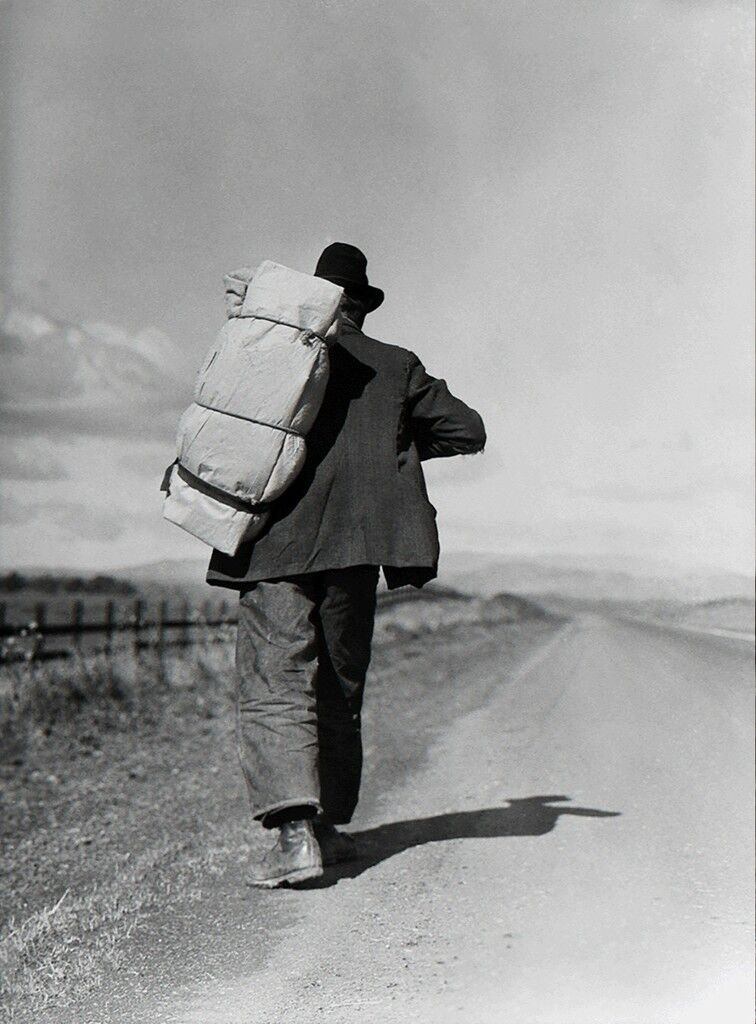 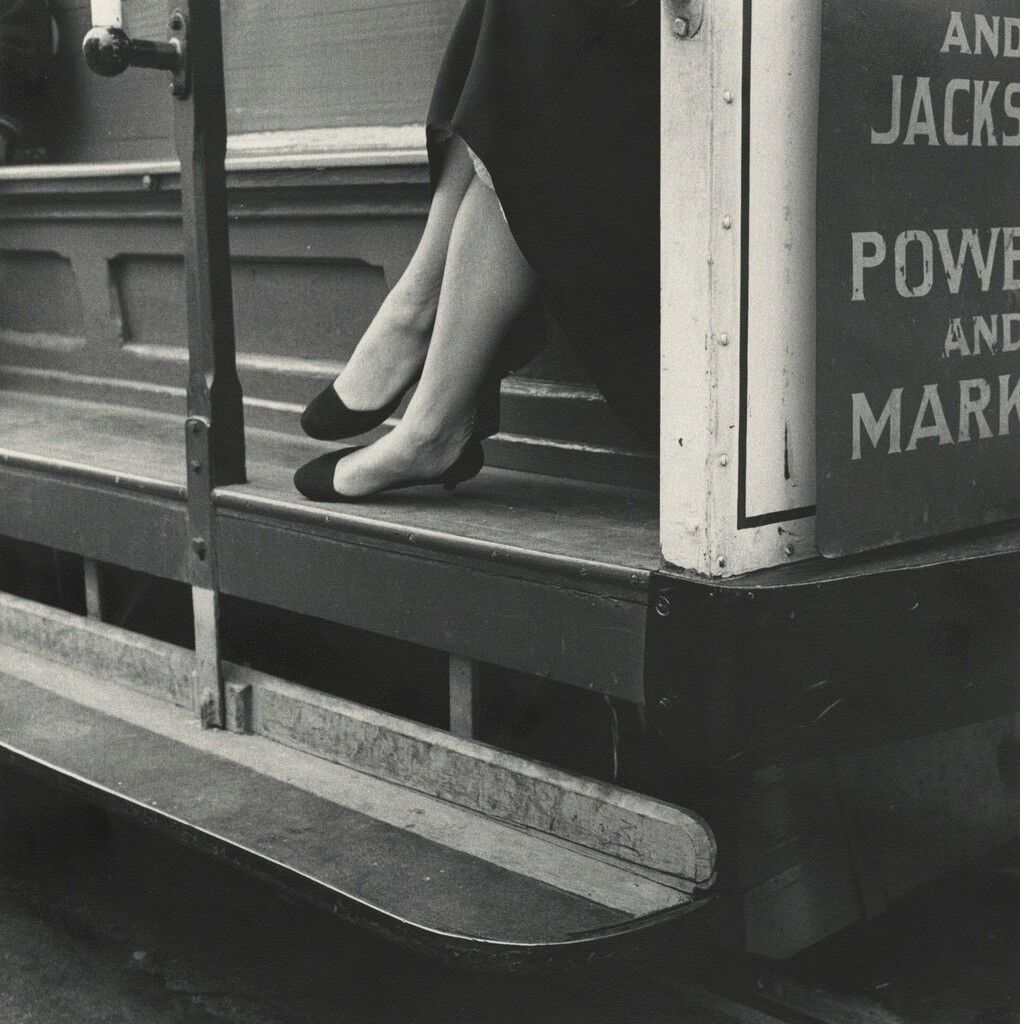 Dorothea Lange
Cable Car, 1956
Lee Gallery
“I’ve never gotten over it, and I’m aware of the force and power of it,” Lange would say about the limp she walked with, as a result of her condition. “[It] formed me, guided me, instructed me, helped me, and humiliated me.” It has been suggested that the circumstances of the injury may have allowed Lange a greater sympathy for her beleaguered subjects.
If her childhood affliction limited her mobility, she didn’t let it stop her from seeing the world. An avid wanderer as a young woman, Lange would travel to Asia, South America, Europe, and the Middle East with her second husband, Paul Schuster Taylor (a longtime economics professor at University of California, Berkeley), in the 1950s and ’60s to feed her photographic curiosity.

Her interest in social issues began before she ever worked for the U.S. government 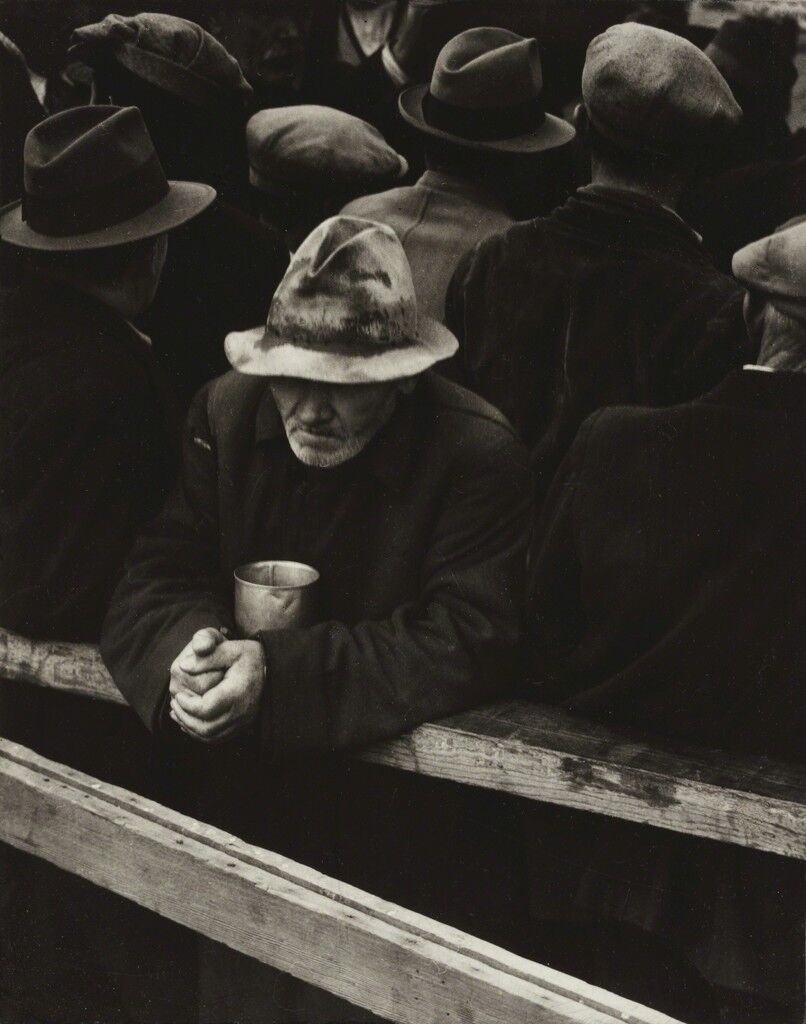 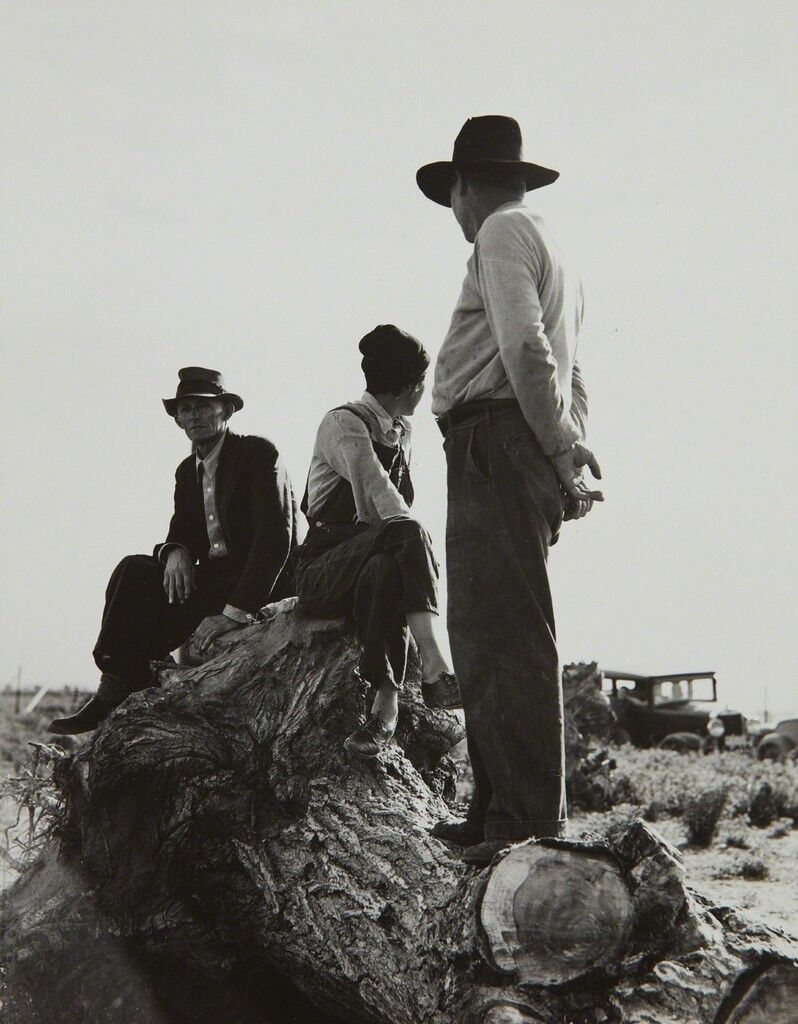 Dorothea Lange
Near Shafter, California, Migratory Laborers, February, 1939
Phillips
Advertisement
Lange’s work White Angel Breadline, San Francisco (1933) was the first in a series focused on the
effects of economic decline
on working-class individuals and families. A departure from her portrait business, Lange went out into the streets of San Francisco’s Mission District to capture this
street photograph
of an out-of-work man in a breadline.
This shift in her practice would make her career. The image matter-of-factly conveyed the hopelessness and isolation of the era’s poverty, catching the attention of local photographers. Lange’s admirers recommended her to Roy Stryker, the chief of the historical section of the Resettlement Administration (and later the Farm Security Administration) under President Franklin D. Roosevelt’s
New Deal
, who would hire her from 1935 to 1939 to document the social impact of the Depression. 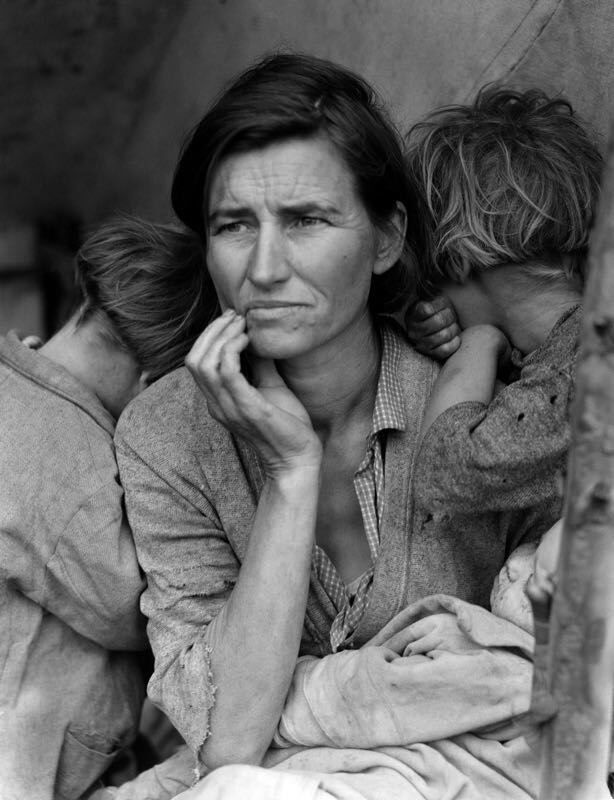 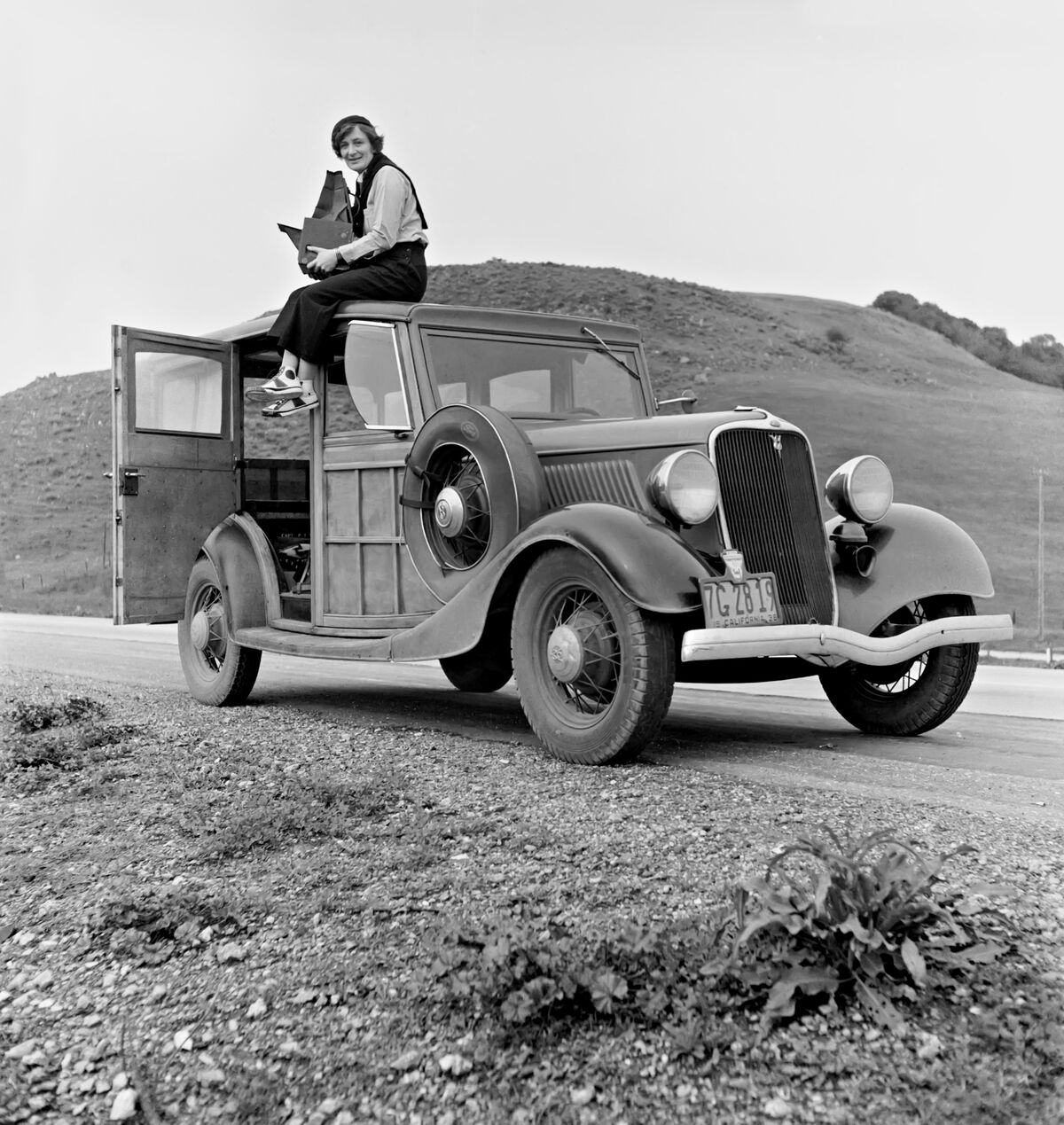 Taken in a pea-pickers’ camp in the Nipomo Valley, Migrant Mother was enormously successful in bringing attention to the plight of California sharecroppers. Upon the image’s publication and submission to the government, the Roosevelt Administration sent 20,000 pounds of food to the settlement. Florence Owens Thompson, the woman in Lange’s photograph, embodied American ideals of hard work, and the photograph also suggested the promise of a still-extant (white) nuclear family that would push a shaky nation into a brighter future.
Not commonly known, however, is the fact that Thompson was 100 percent Cherokee, born on American Indian land in present-day Oklahoma—or that her first husband, with whom she had six children, had died five years before Migrant Mother was taken. Thompson had remarried and borne a seventh child.
The triangular composition of Migrant Mother recalls classic representations of the
Virgin Mary and child
, suggesting a celebration of the traditional family—even leading Thompson to be referred to as a “New Deal Madonna.” The reality, however, is that the children under Thompson’s arms are known to be from different fathers. Lange’s straightforward documentary approach captured a much more complicated set of truths about itinerant life in the Depression.
Despite their fame, it would seem that little effort was made to preserve Lange’s original images. A print of Migrant Mother was discovered in a box, among other Lange prints, in a dumpster behind the San Jose Chamber of Commerce in the 1960s, leading to the eventual “rediscovery” of several of her works. 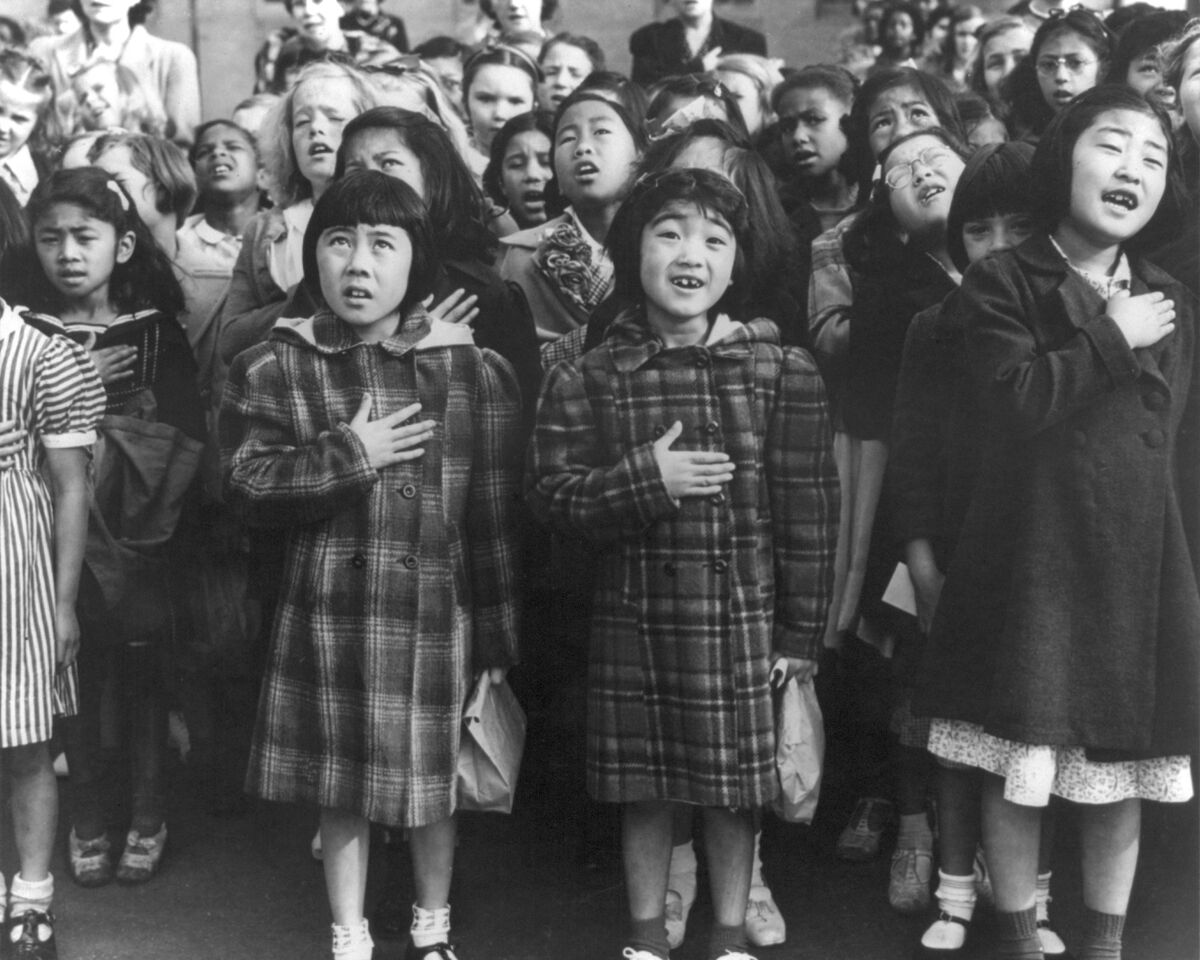 Dorothea Lange, San Francisco, Calif., April 1942 - Children of the Weill public school, from the so-called international settlement, shown in a flag pledge ceremony. Some of them are evacuees of Japanese ancestry who will be housed in War relocation authority centers for the duration, 1942. Courtesy of the Library of Congress.

Lange was the first woman ever awarded a Guggenheim Fellowship for Photography, “appointed for the making of documentary photographs of the American social scene, particularly in rural communities.” Her tenure was meant to last for 12 months. But she would not complete the appointment, giving it up early to accept a job photographing Japanese-American internment camps for the U.S. Office of War Information (OWI).
Lange’s images of Japanese-American families being evacuated and relocated provoked empathy for the victims of wartime xenophobia so powerfully that the OWI refused to publish them, concerned about a popular backlash. This disappointment didn’t limit Lange’s opportunities, though, nor lead to the disapproval of her superiors. The U.S. government would still offer her prestigious assignments, such as photographing the San Francisco conference that led to the creation of the United Nations in 1945. 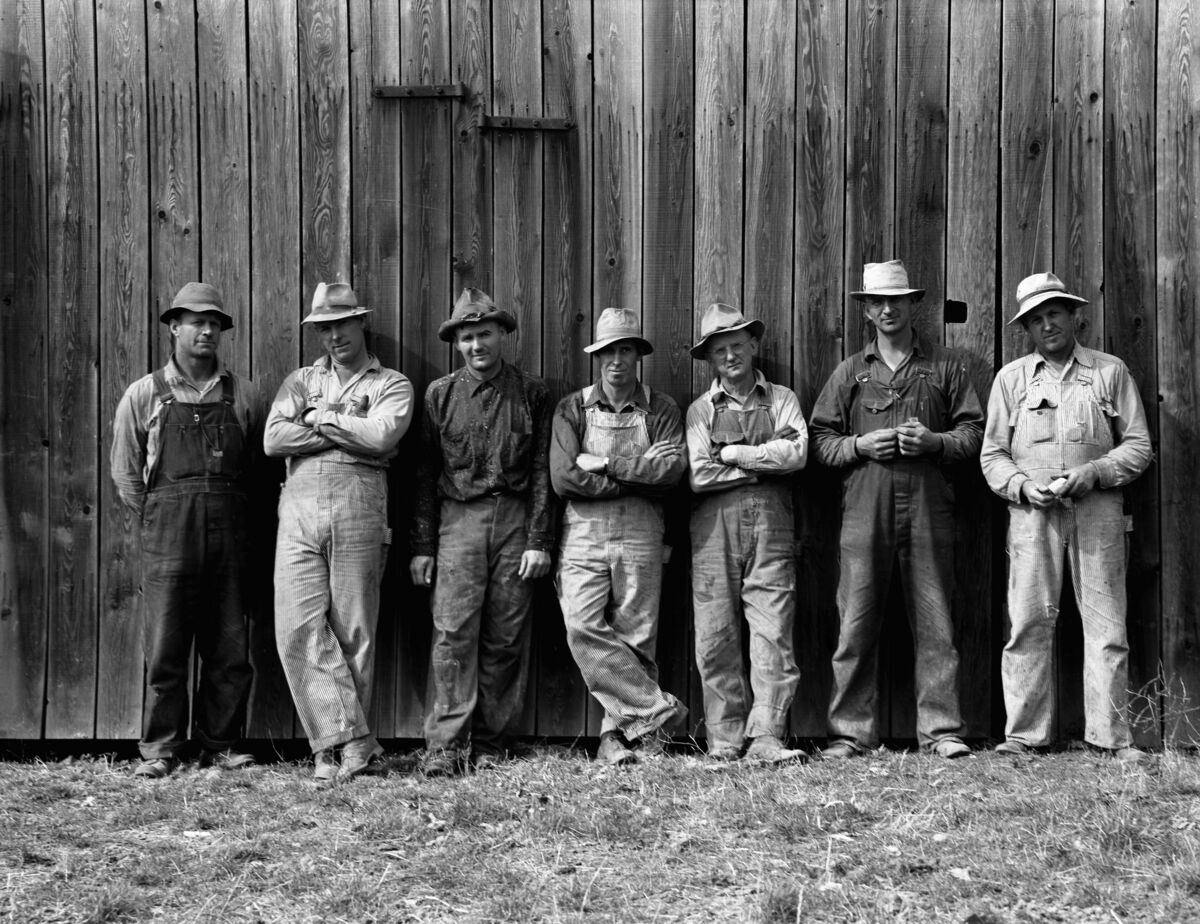 Dorothea Lange, Here are the farmers who have bought machinery cooperatively. Photographed just before they go to dinner on the Miller farm where they are working. West Carlton, Yamhill County, Oregon, 1939. Courtesy of the Library of Congress.

In 1951, Lange and several colleagues founded the important photography magazine Aperture. She would use those connections, and several from the Farm Security Administration, to help artist
Edward Steichen
organize the groundbreaking post-war exhibition “Family of Man” at New York’s Museum of Modern Art in 1955.
To help round out Steichen’s field of photographers, Lange sent a letter in 1953, “A Summons to Photographers All Over the World,” calling on her fellow documentarians to “show Man to Man across the world…Man’s dreams and aspirations, his strength, his despair under evil. If photography can bring these things to life, this exhibition will be created in a spirit of passionate and devoted faith in Man. Nothing short of that will do.” 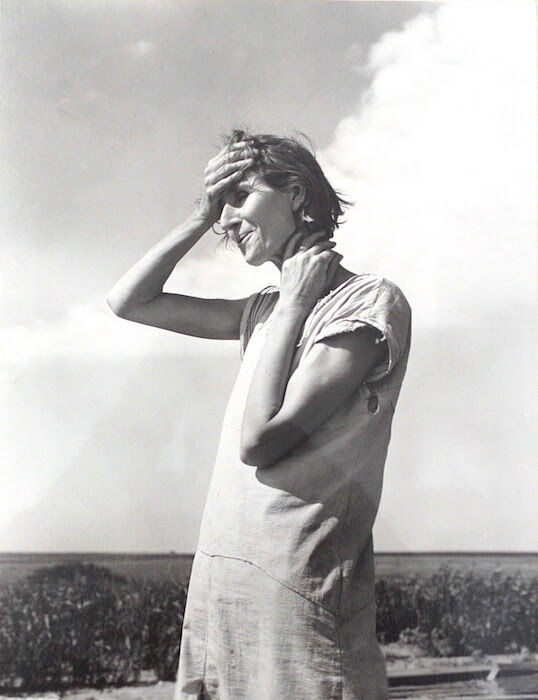 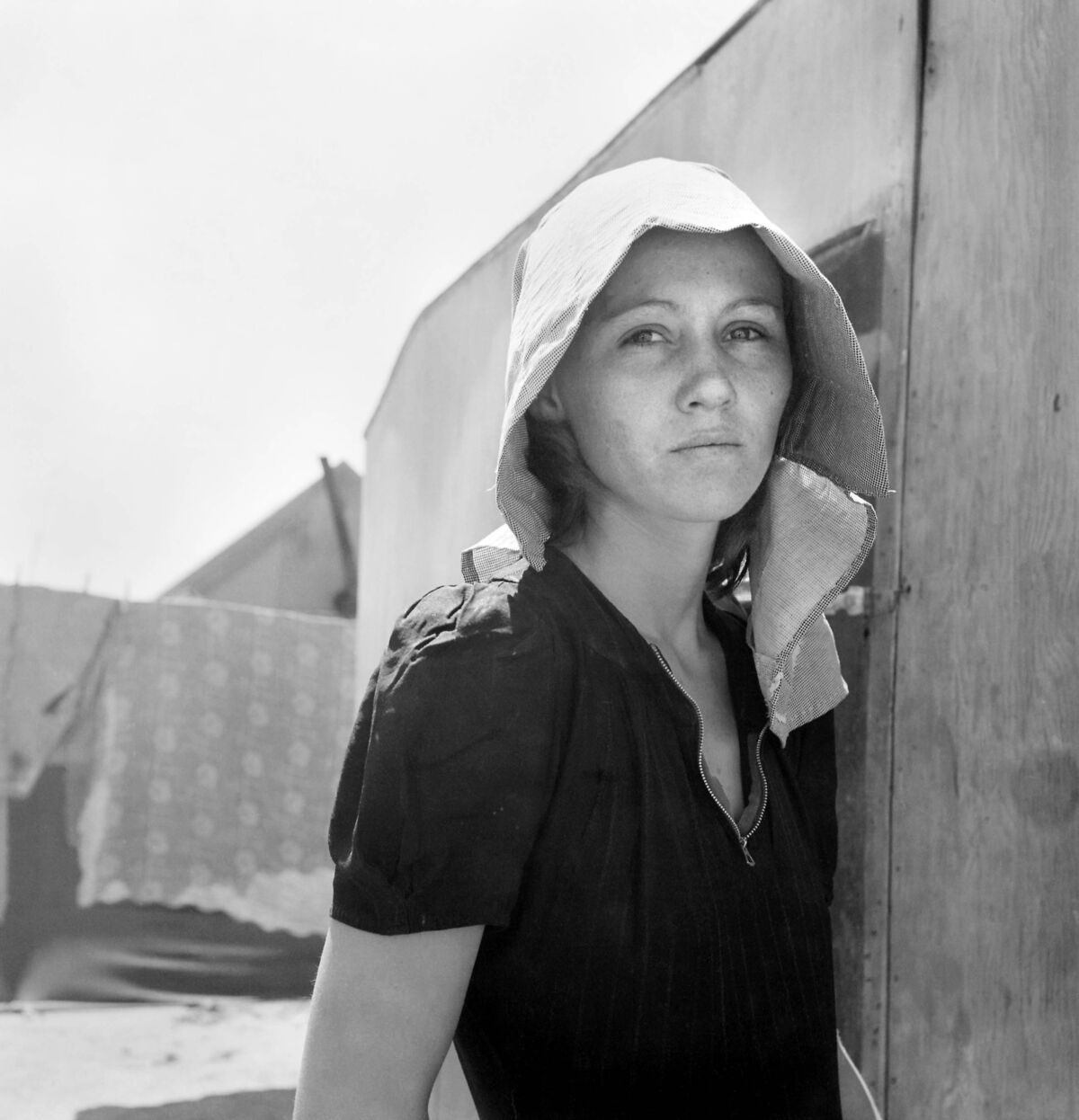 In recognition of her social engagement and contribution to the arts, Lange was posthumously inducted into the National Women’s Hall of Fame in 2003 and the California Hall of Fame in 2008. And for all of the fascinating details of her life, her entry in the National Women’s Hall offers a concise and accurate portrayal of her legacy:
“She chronicled the new
industrial
expansion of San Francisco, the societal change from rural small town communities to mass urban culture in America, and photographed scenes across the globe. Her dedication, breadth, compassion, empathy, graphic power, and superb technique set standards that stand today.”
Jon Mann
Related Stories