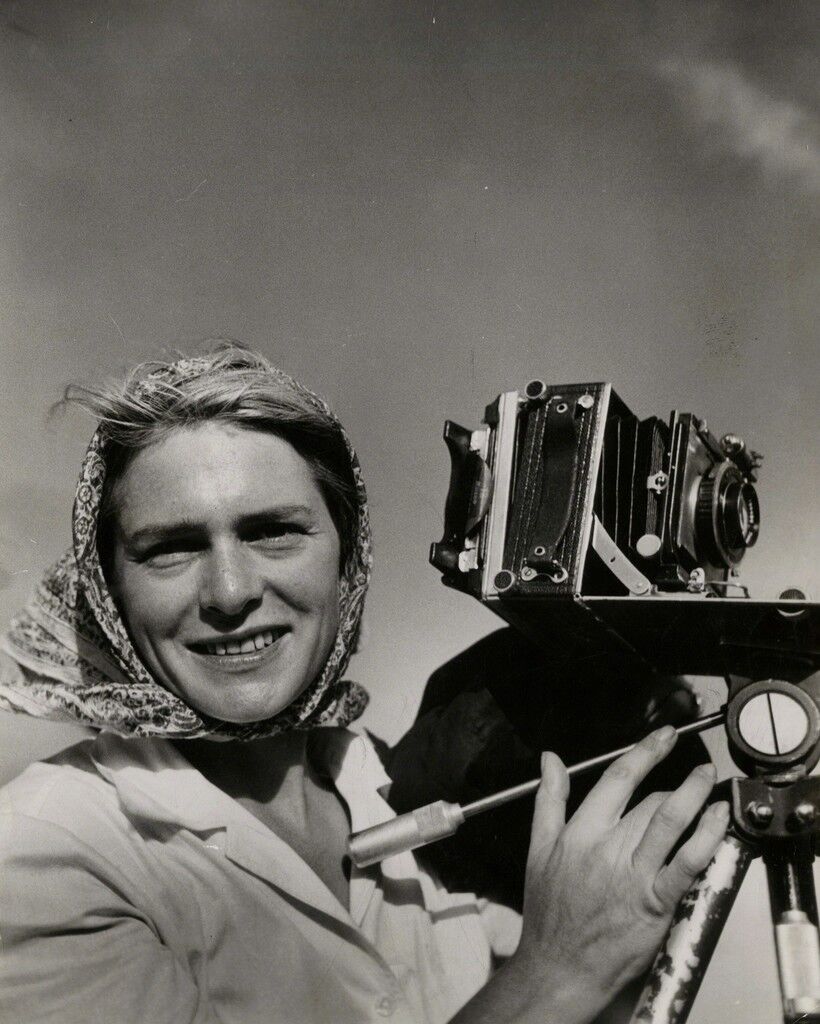 Margaret Bourke-White
Self Portrait, 1946
Etherton Gallery
When Life magazine debuted on November 23, 1936, it transformed American photojournalism overnight. Publisher Henry Luce believed the 20th century to be “the American century”—and he promoted that message through images. Before Life, magazine articles in the U.S. consisted of “a picture that illustrated a story,” said curator Marilyn Kushner of the New-York Historical Society. Afterwards, “it was the text that illustrated the photograph.”
Working with the Life Picture Collection, Kushner co-curated “LIFE: Six Women Photographers,” an exhibition highlighting the female staff photographers of Life magazine, which is currently on view at the New-York Historical Society through October 6th. During its heyday as a weekly magazine, and before it was first suspended in 1972, Life employed 101 salaried photographers—but only six were women.
Combined, those six photographers shot over 325,000 images from the 1930s to the early 1970s. Kushner, along with fellow curators Sarah Gordon, Erin Levitsky, and William J. Simmons, selected one story from each woman that showed a different facet of Luce’s idea of American eminence. However, by showing unpublished images, too, they peeled back the glossy veneer applied by the editorial team, whose vision often portrayed American life in a different light from what the photographers observed firsthand.
Many of the world’s iconic images and landmark photo stories were shot for Life. The magazine published
Larry Burrows
’s cover of a dying pilot in a helicopter in Vietnam in 1965;
Philippe Halsman
’s portrait of then–rising star Marilyn Monroe in 1952; and
Alfred Eisenstaedt
’s capture of a Times Square kiss on VJ Day in 1945. But Life debuted with a cover story by
Margaret Bourke-White
. And she, along with the five women below, helped shape contemporary photojournalism. 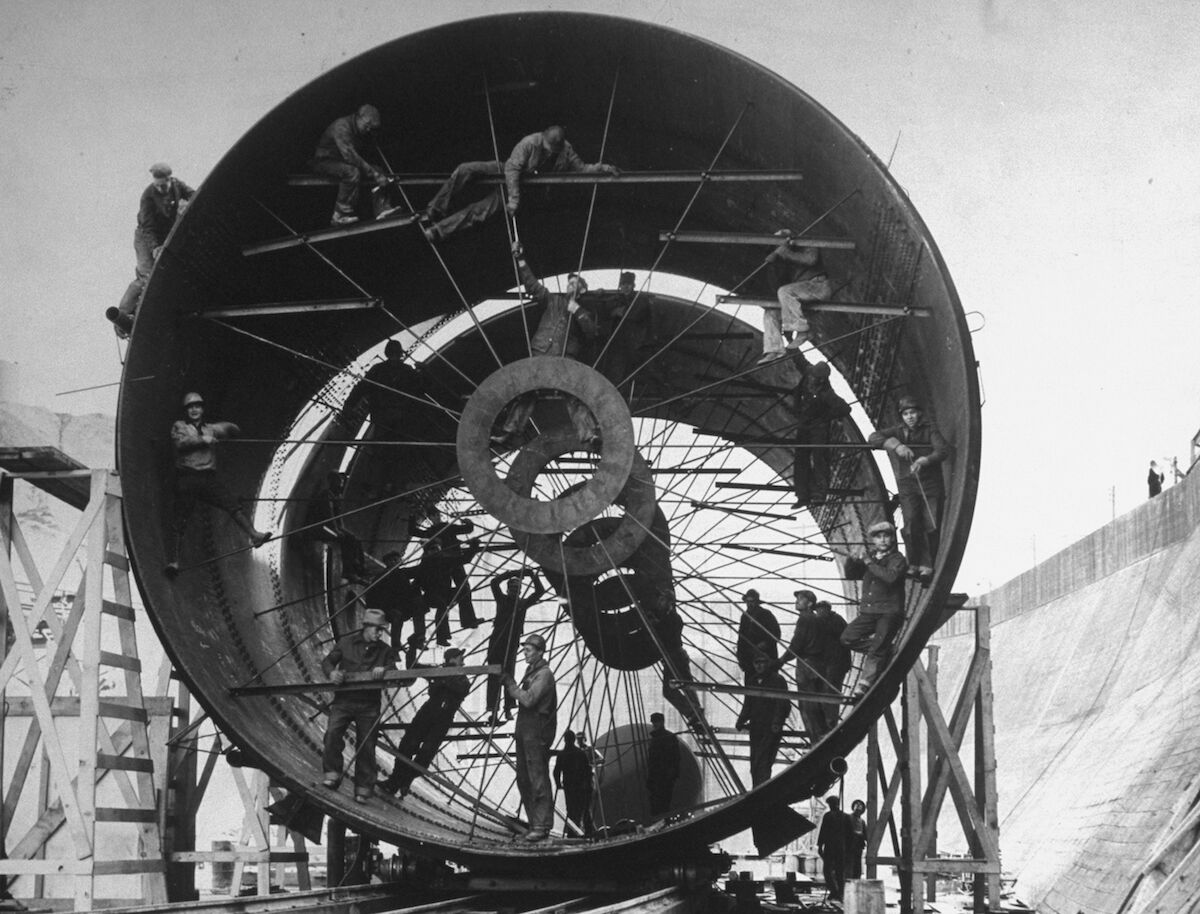 In 1936, Bourke-White was sent to Fort Peck, Montana, to capture the physical embodiment of American exceptionalism—the largest man-made hydraulic dam in the world—for Life’s first cover. She returned with much more than images of the towering New Deal project.
“What the editors expected were construction pictures as only Bourke-White can take them,” Luce wrote in the magazine’s introduction. “What the editors got was a human document of American frontier life.”
Bourke-White’s image of the monumental spillway made the cover, but she also turned her lens on the men and women who moved to the town seeking reprieve from the Great Depression. Her images of the working class relaxing after a long day captured the spirit of the hopeful town. 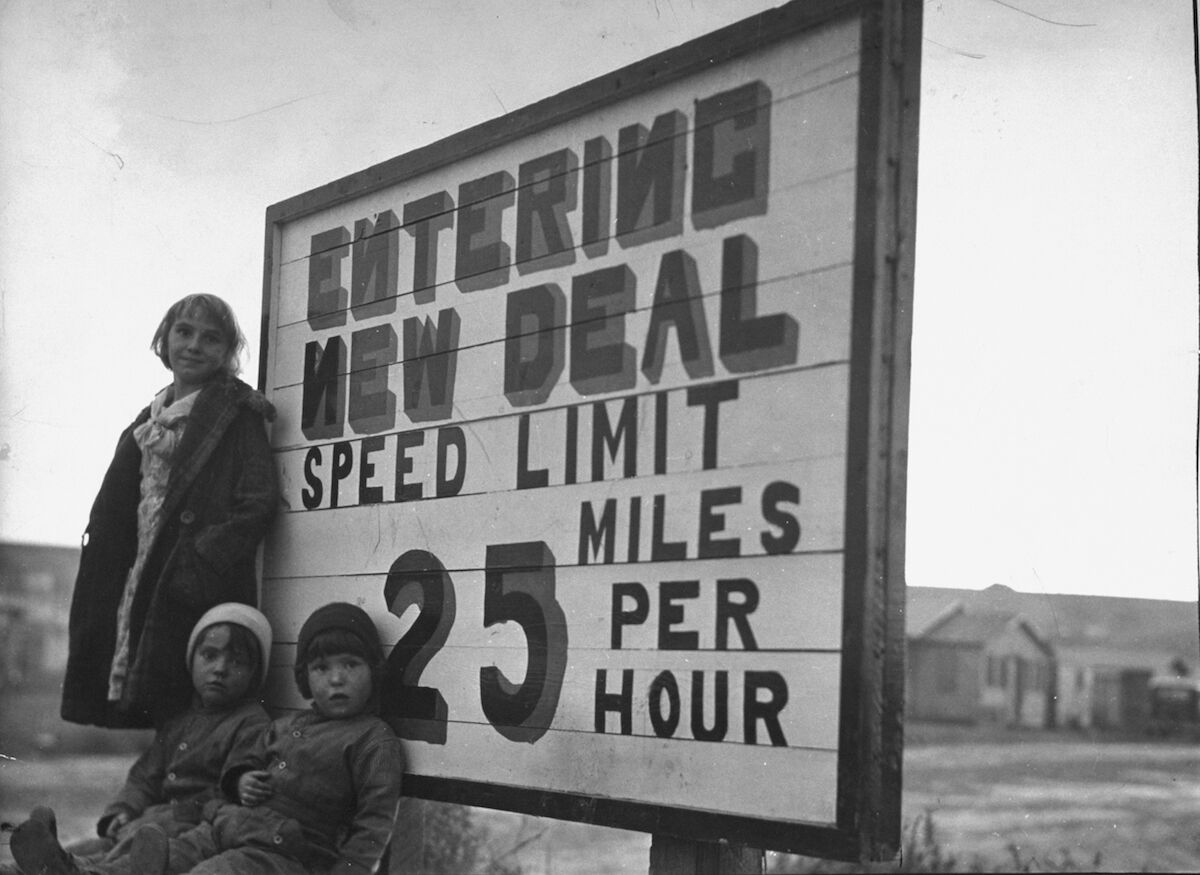 Advertisement
Bourke-White has since been revered for her absolute tenacity. She was the first woman to become a war correspondent, embedding with Allied infantrymen in World War II—and survived after her ship was torpedoed on the way there. Yet she and the other female photographers she worked with faced endemic sexism in the workplace, from their opinions being disregarded to the editorial staff treating them like a novelty. In 1949,
Nina Leen
,
Martha Holmes
, and
Lisa Larsen
were the subject of an internal newsletter on the fashion of Life’s female photographers. “How to look feminine and still be photographically efficient is a daily problem for Life’s female photographers,” the memo noted. Bourke-White’s standard wartime look? “Slacks, skirt, jacket, and sometimes a topcoat.” 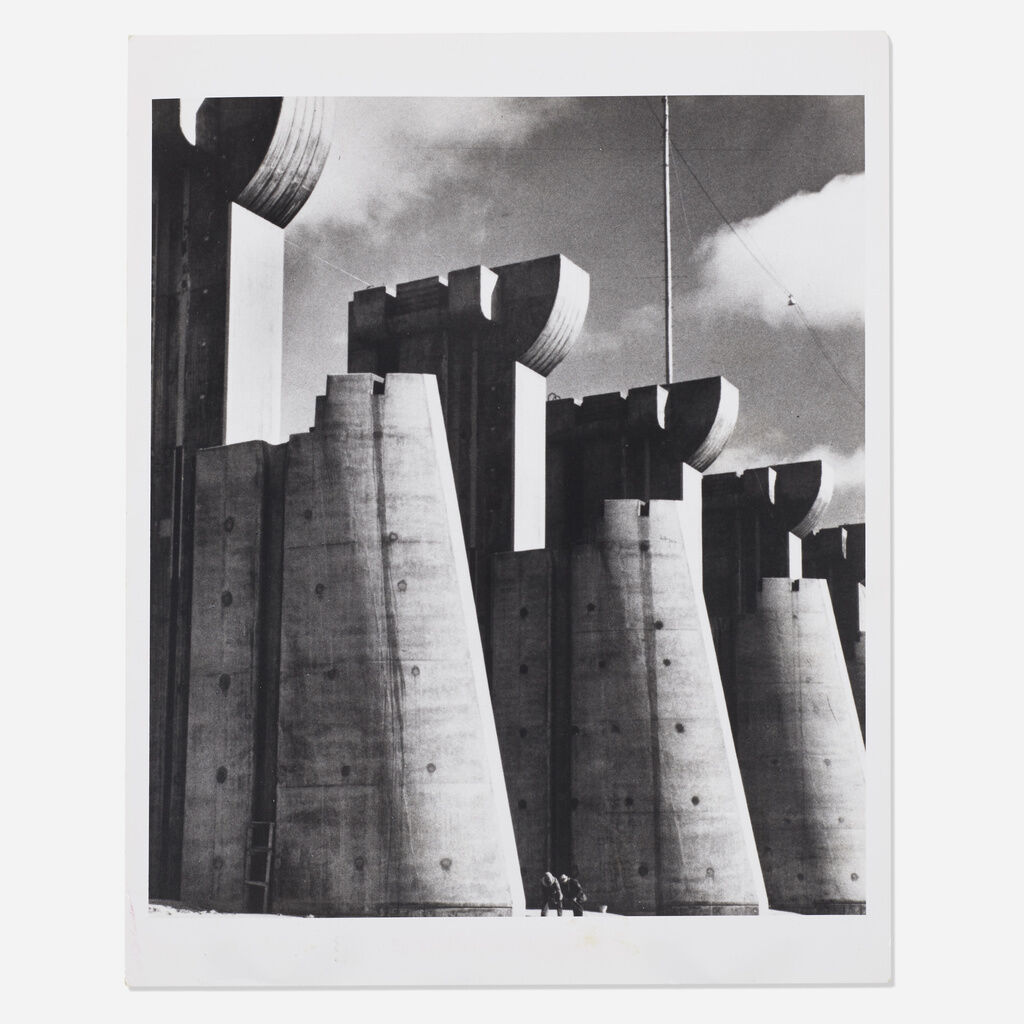 Margaret Bourke-White
Fort Peck Dam, 1936
Wright
Kushner said that it’s important to understand the context of the era when reflecting on the magazine’s history. “They had to fight harder to get what they wanted,” she said, “but they were focused on taking the photograph and not focused on how they were being treated as women.” 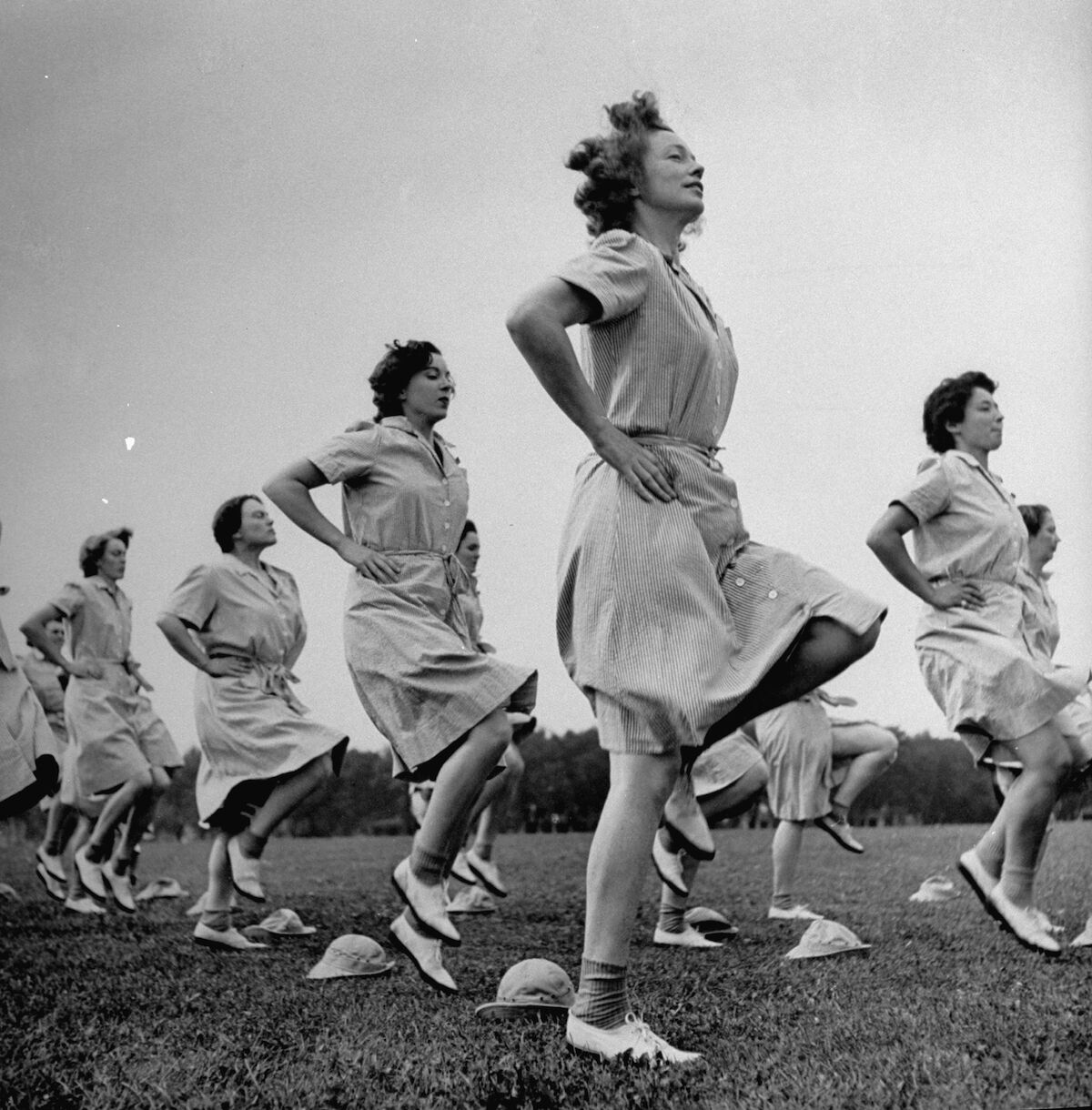 At a time when American politicians are still at odds over who should be able to serve their country, it is worthwhile to look back at Hansen’s photo essay about the brand-new Women’s Army Auxiliary Corps (WAAC) in 1942. Shot the same year the St. Louis, Missouri, native was promoted from researcher to staff photographer, the series, according to the curators, “helped Americans accept women in uniform.”
More than 150,000 women served in the army during World War II, primarily tasked with clerical and mechanical work. But despite recognition from General Douglas Arthur as being his “best soldiers,” the nascent WAAC was met with condescension: “Though old Army men harumph at the sight of girls trying to act like soldiers, all WAACs get a thorough grounding in basic infantry drill,” the Life article stated. 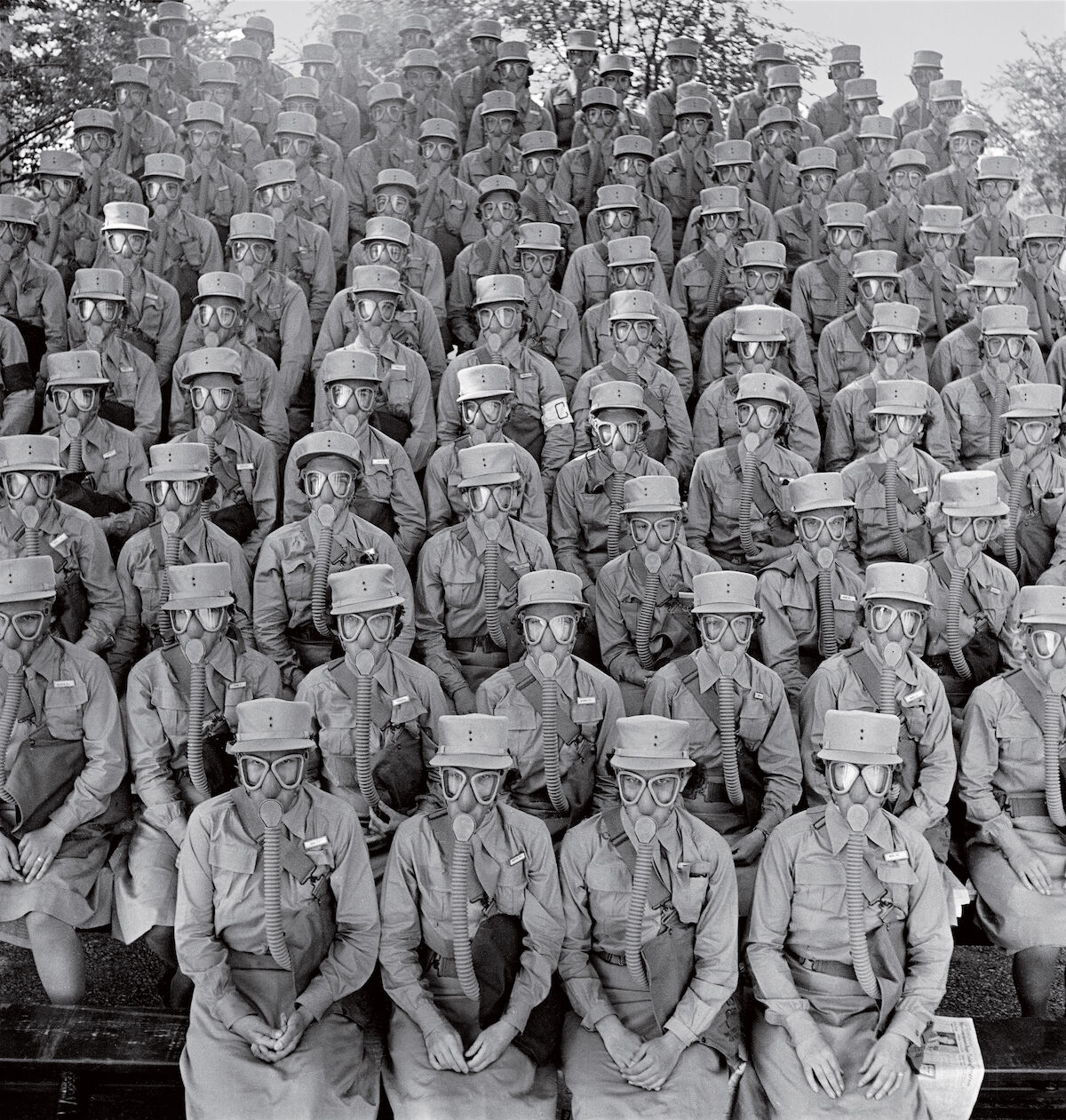 However, the editors didn’t completely subvert gender roles with Hansen’s photo essay. The curators noted that “potentially threatening images of young women…studying truck engines, organizing supply chains, and wearing gas masks were tempered by scenes of WAAC’s ironing their uniforms and singing at a piano.” One of the images, featuring the women in formation in starchy pinstripe uniforms, is captioned:“The exercises are designed to foster flexibility and endurance, not bulging muscles.” 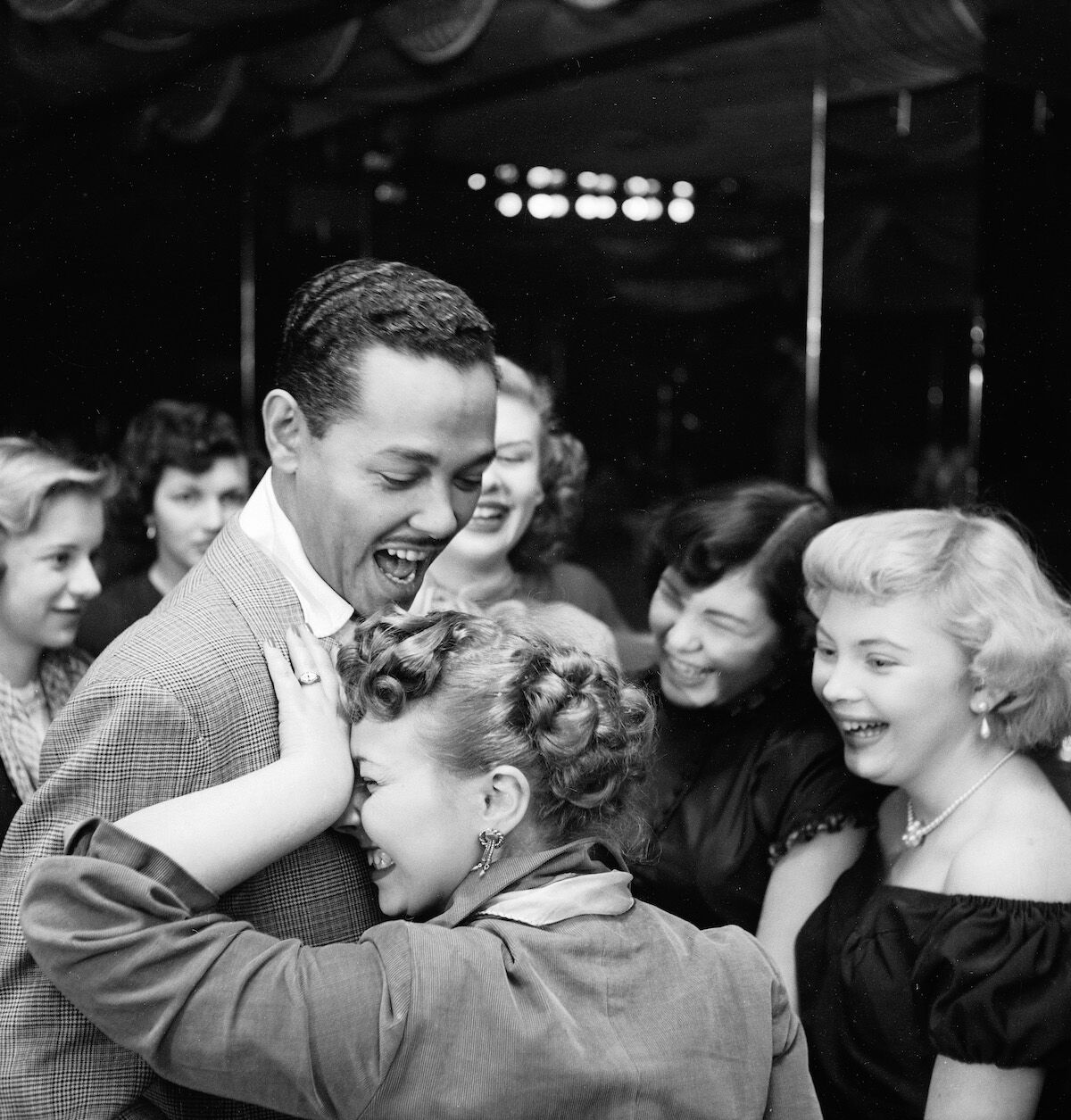 At just 20 years old,
Martha Holmes
joined the staff of Life after working at local papers in her home city of Louisville, Kentucky. During her nearly four-decade-long tenure as a staffer and freelancer, she took innumerable notable portraits of famous figures, including some of the most well-known images of artist
Jackson Pollock
, squatting over a canvas with a cigarette dangling from his mouth.
In 1950, Holmes photographed Billy Eckstine, the mixed-race jazz singer whose smooth ballads drew crowds of teenaged followers and sold millions of records for MGM. Among Holmes’s images was a snap of a white female fan embracing him on the street; an innocent gesture, but a career-destroying moment for Eckstine. 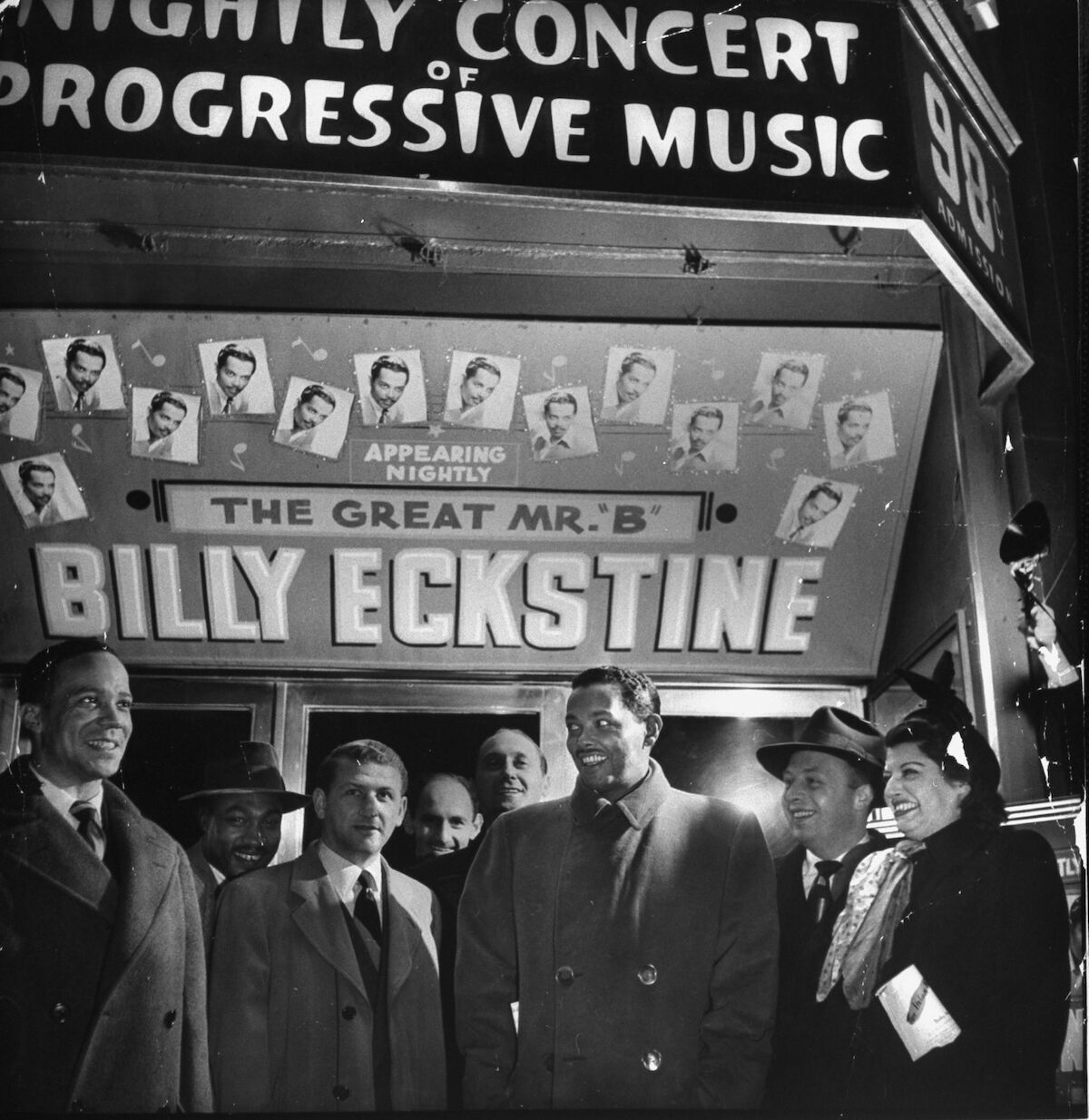 “It’s actually what America should be like, with no racial tension, no racial separation—just honest love and happiness between the races,” biographer Cary Ginell told NPR in 2014. “But America wasn’t ready for that in 1950. White America did not want Billy Eckstine dating their daughters.”
Holmes felt the image was one of her strongest for the same reasons echoed by Ginell. She said it showed “what the world should be like,” not knowing that Eckstine would be blacklisted for decades, finally receiving a Grammy Hall of Fame Award in 1999, six years after his death. 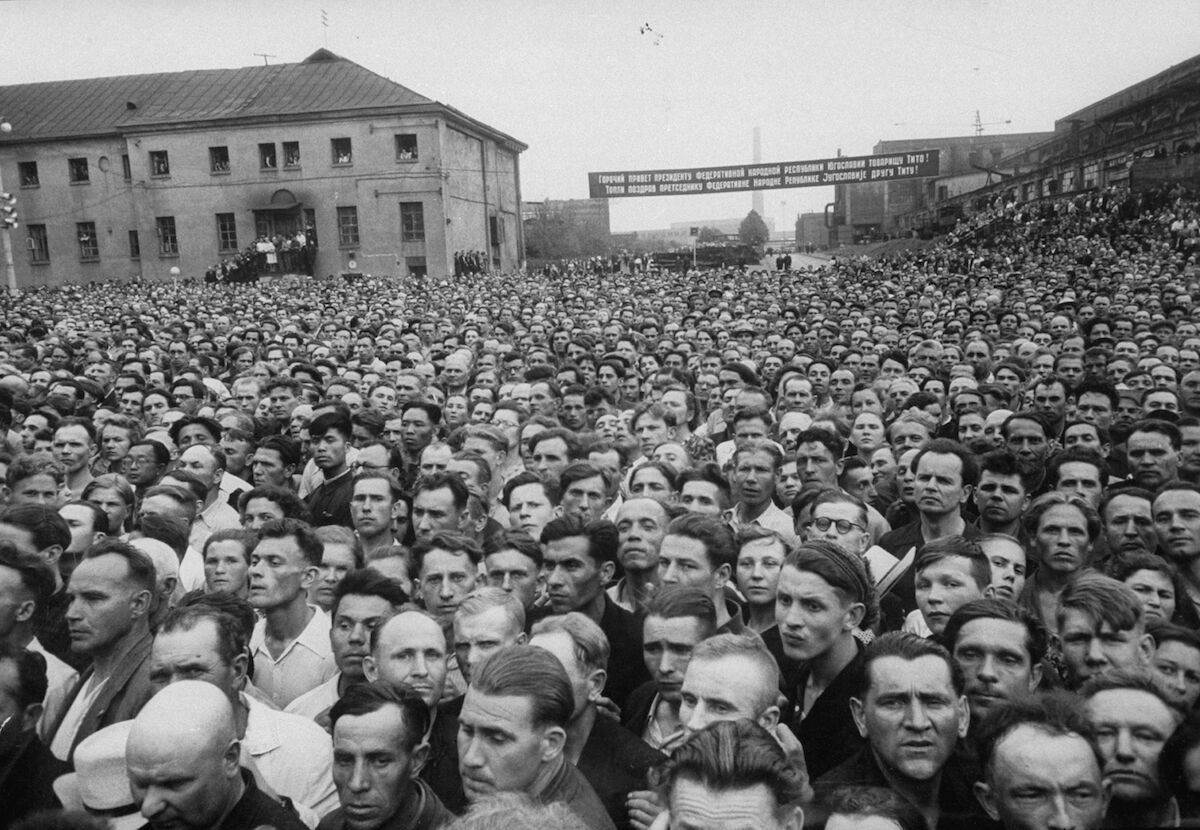 When
Lisa Larsen
joined Life in the 1940s, she had already fled Nazi Germany as a young woman and worked as a photographer for publications such as Vogue and the New York Times. She was initially assigned fashion and entertainment stories—famously taking the wedding images of the Kennedy–Bouvier union. But in the 1950s, she became known for her easy way with politicians and her keen eye for composition.
In 1956, during the Cold War, Life sent Larsen to the Kremlin to document Nikita Khrushchev welcomingYugoslavian president Josep Broz, or “Tito.” Just eight years before, Tito had broken away from Soviet influence under Joseph Stalin and had since survived the Kremlin’s assassination attempts. But Krushchev’s effort to bring Tito back into the fold of the Soviet Union was in good faith—not a setup, as Americans expected. 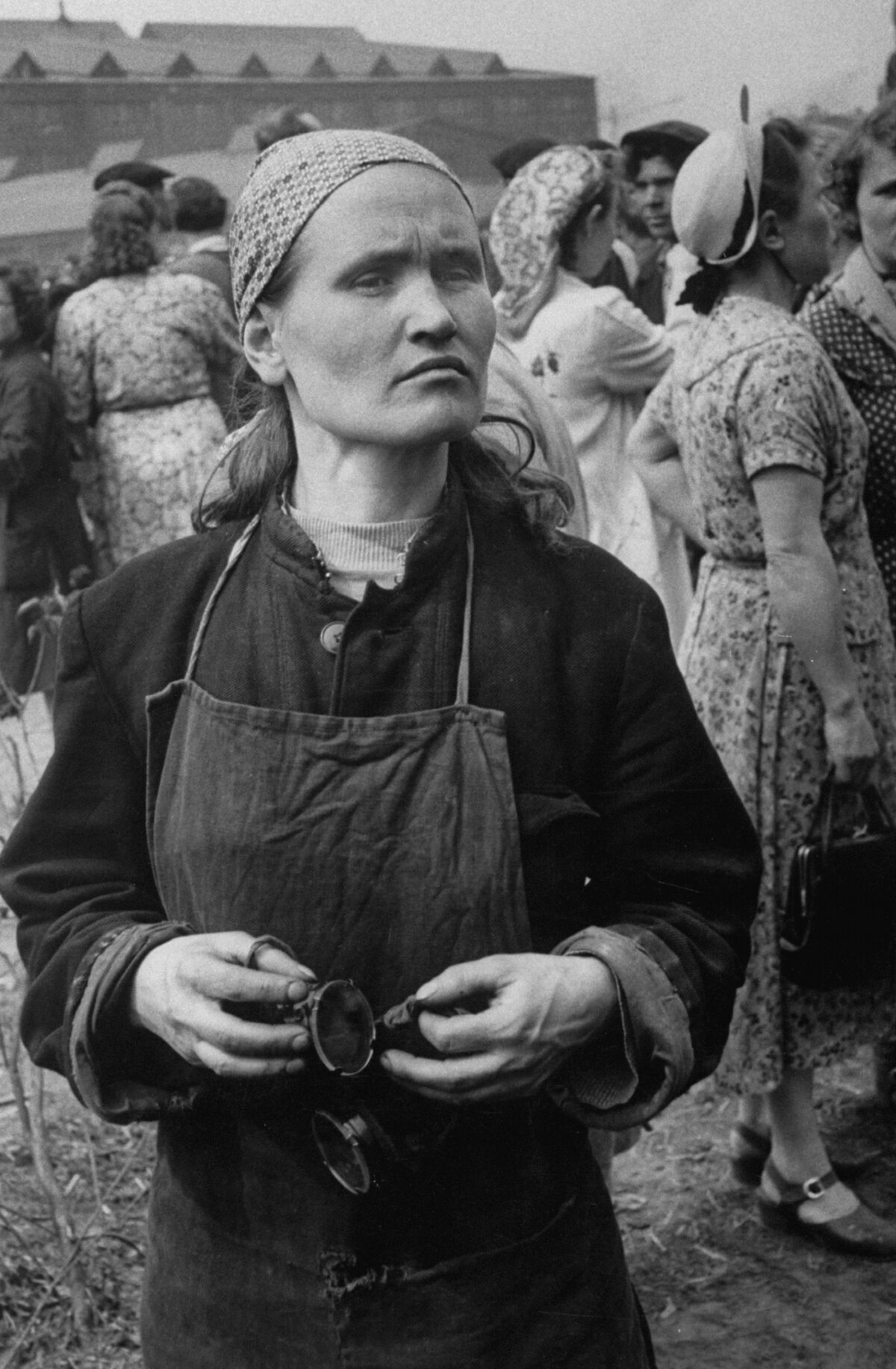 The curators noted that Larsen’s unpublished images revealed “her uncanny ability to record the depth of Soviet effort to put on a good show,” seen in one image of a woman kneeling on the street, carefully painting a grate. Larsen caught the attention of Tito, too; she was the only photographer granted permission to take images of him during his downtime at Sochi’s Black Sea resort. 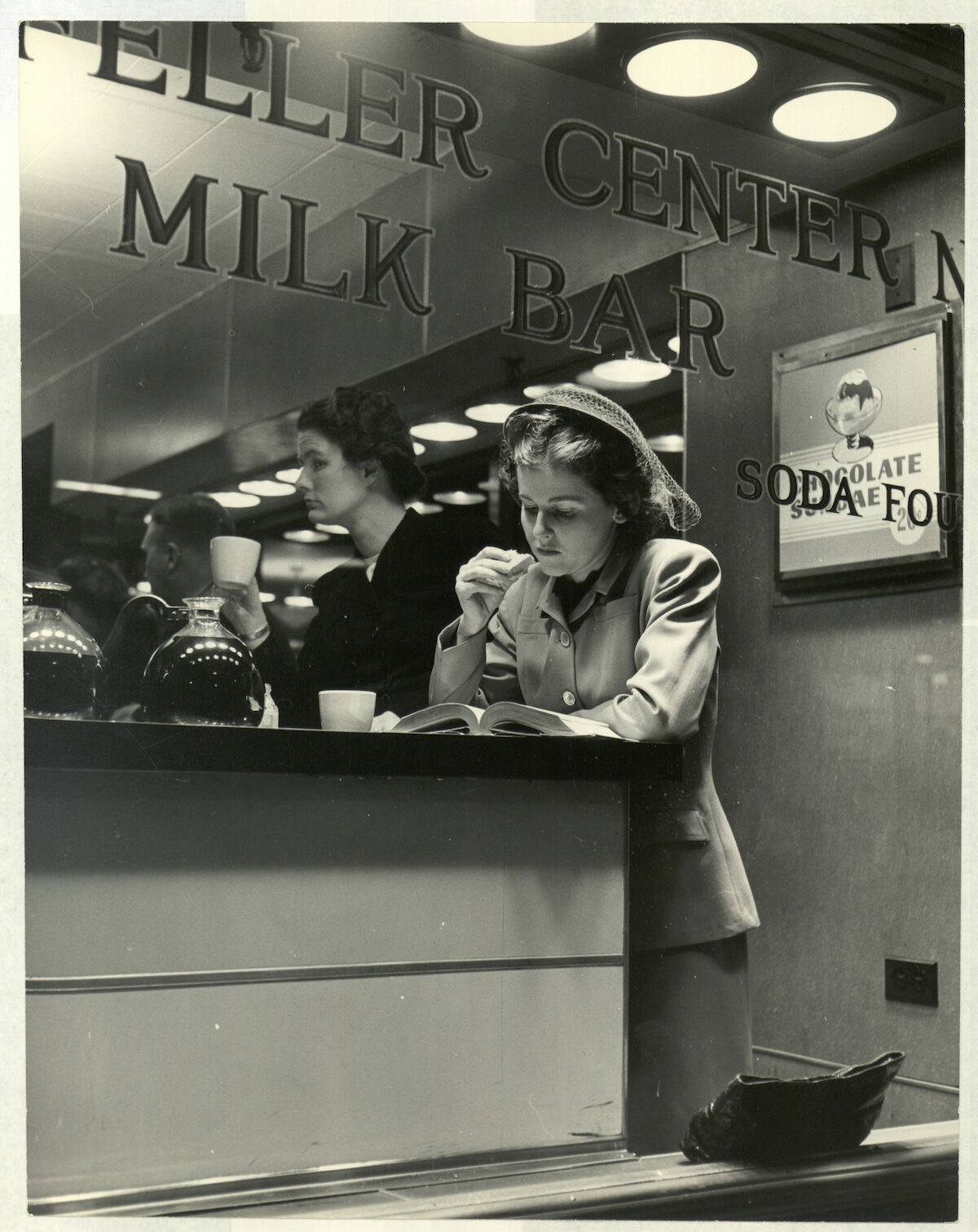 Though fashion models, socialites, royalty, and animals all graced
Nina Leen
’s lens, it was American culture that continually fascinated the Russian-born photographer, who immigrated from Europe to New York just as World War II began. Leen photographed over 40 covers for Life during more than three decades, chronicling American life as the country ebbed and flowed between four major conflicts.
In one particular photo essay from 1947, she was asked to take pictures of the “American Woman’s Dilemma”—for the many women who sought employment during the war, how would they return to “normalcy” after? The accompanying article, written by a man, bumbled through a prescient discussion of the struggle to balance work, life, and childcare by positioning all women as dutiful mothers and wives who had no purpose in life beyond those roles. “She wants a husband and she wants children,” the magazine deck read. “Should she go on working? Full time? Part time? Will housework bore her? What will she do when her children are grown?” As one image caption claimed, “Too much leisure can be a heavy burden.” 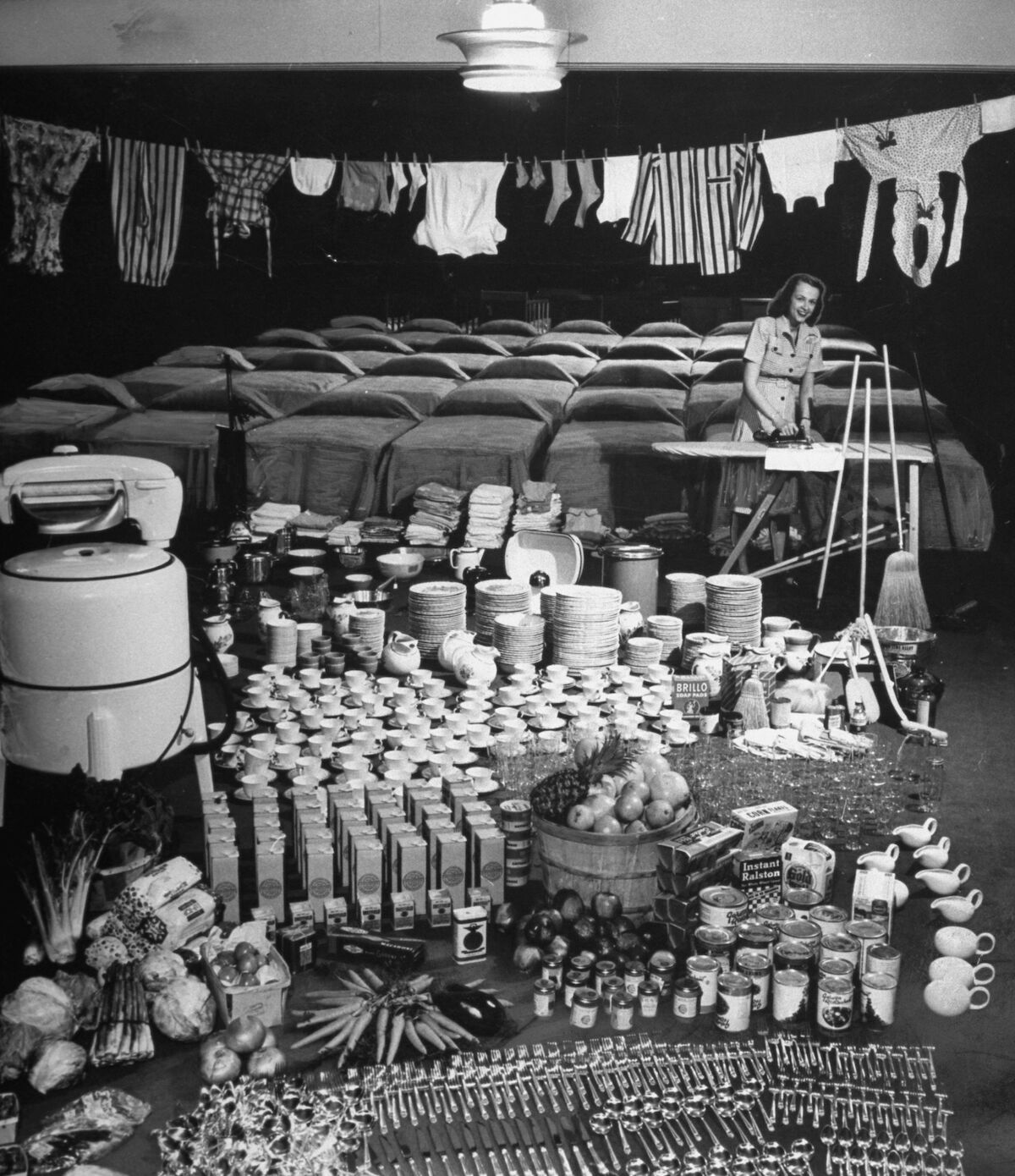 Leen’s images showed factory worker Josephine Gloss assembling dolls; artist Edna Eicke illustrating covers for The New Yorker at home; and television broadcaster Dorothy Wootton rehearsing lines with her family nearby. Only one of Leen’s portraits of an unmarried woman—captioned “Unmarried with future decisions to make”—made the cut.
Despite the editorial team’s cherry-picking to show the viewpoint they had in mind, looking at Leen’s work through a contemporary lens raises cultural questions we still debate today in discourse about federally sanctioned maternity leave. “I find it very interesting that what came out of that was the fact that it was very hard for women to work and have a baby at the same time,” Kushner said of Leen’s images. 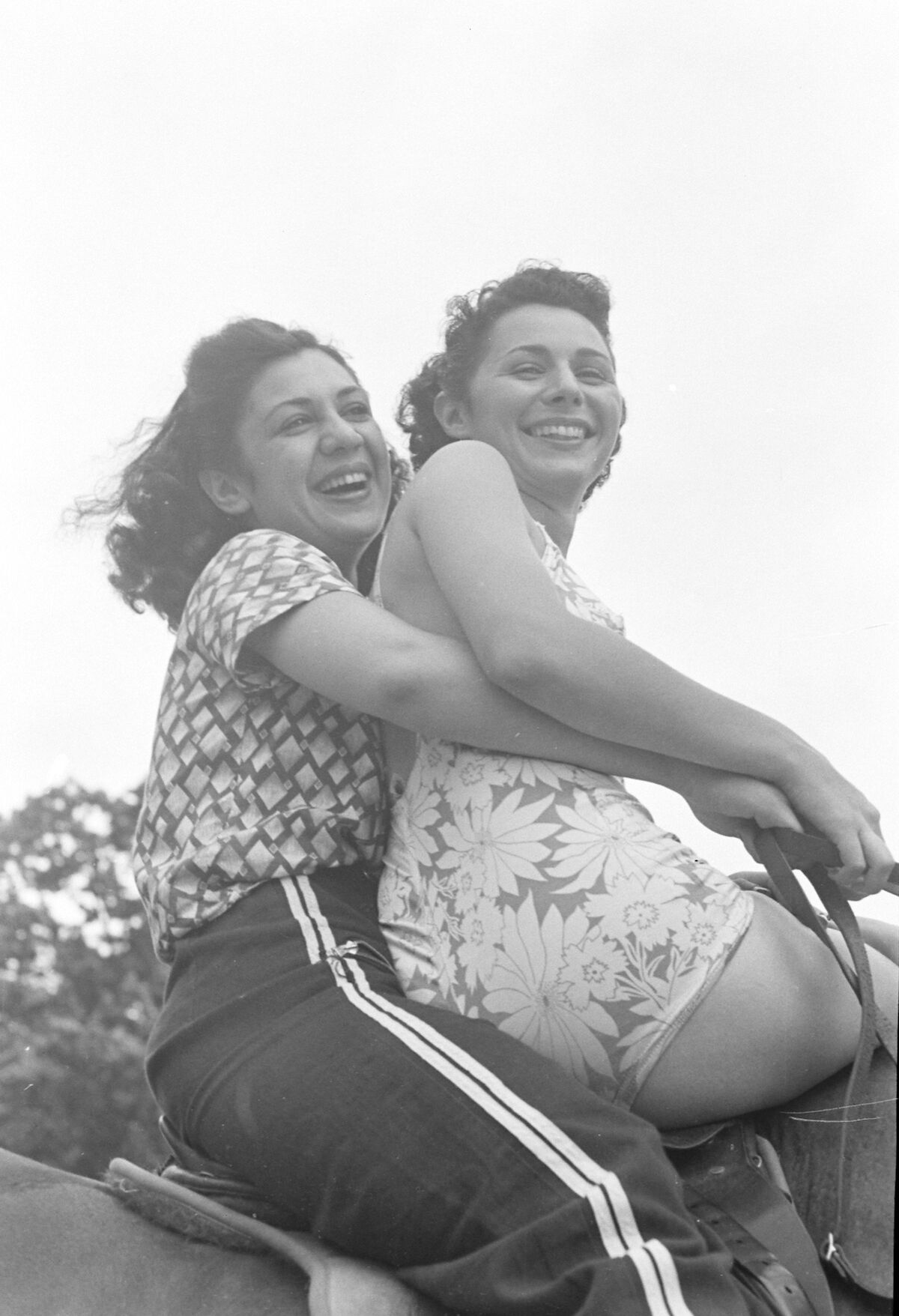 Hansel Mieth, photograph from “International Ladies’ Garment Workers: How a Great Union Works Inside and Out,” LIFE, August 1, 1938. Courtesy of and © LIFE Picture Collection, Meredith Corporation.

In 1938, one year after she was hired by Life,
Hansel Mieth
followed the activities of the International Ladies’ Garment Workers Union (ILGWU) for a story to highlight the benefits of organized labor in Depression-era America. Mieth was a German photographer originally named Johanna, but changed it to travel throughout Europe disguised as a boy with her eventual husband-to-be, Otto Hagel. In the U.S., she focused on social topics for Life. This particular assignment on the ILGWU was meant to “portray factory workers as aspiring members of the middle-class,” the curators noted—an embodiment of the American Dream. 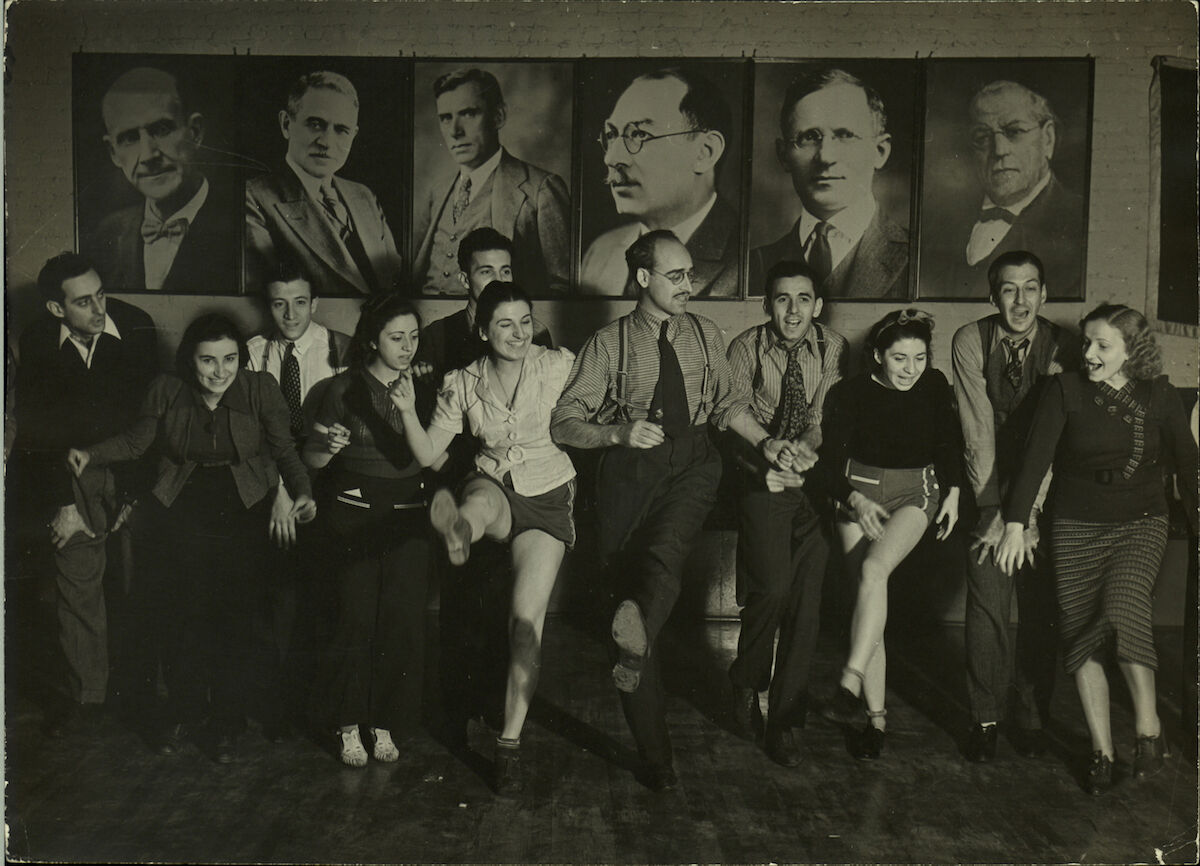 Hansel Mieth, photograph from “International Ladies’ Garment Workers: How a Great Union Works Inside and Out,” LIFE , August 1, 1938. Courtesy of and © LIFE Picture Collection, Meredith Corporation.

The Life editors primarily printed Mieth’s images of a picturesque summer retreat. “They had a dance line and they went to classes, they sat in the sun, they rode horses,” Kushner said of women in the images. Many of Mieth’s more intimate shots of factory workers at home or participating in racially integrated activities did not make it to print, nor did her image of a worker striking. “They didn’t want to show that side of it,” Kushner said.
But the editors’ notions didn’t stop Mieth from firing her shutter. In fact, in 1940, editor Wilson Hicks sent her a memo that she took too much film. “In several recent stories you have gone overboard. The Hymes child photography story today is the latest one. We could have done with 20 pictures of him. You took 77,” Hicks wrote. “This suggestion hasn’t anything to do with the quality of your work, which, as I said at the outset of this memo, is splendid.”
Jacqui Palumbo is a contributing writer for Artsy Editorial.
Related Stories

These 20 Women Are the New Faces of Photojournalism 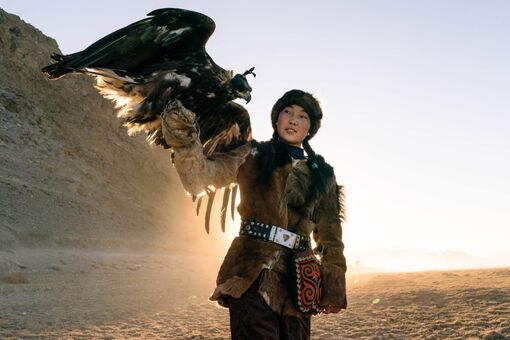 These 20 Women Are the New Faces of Photojournalism
Jacqui Palumbo and Brienne Walsh
May 14, 2019