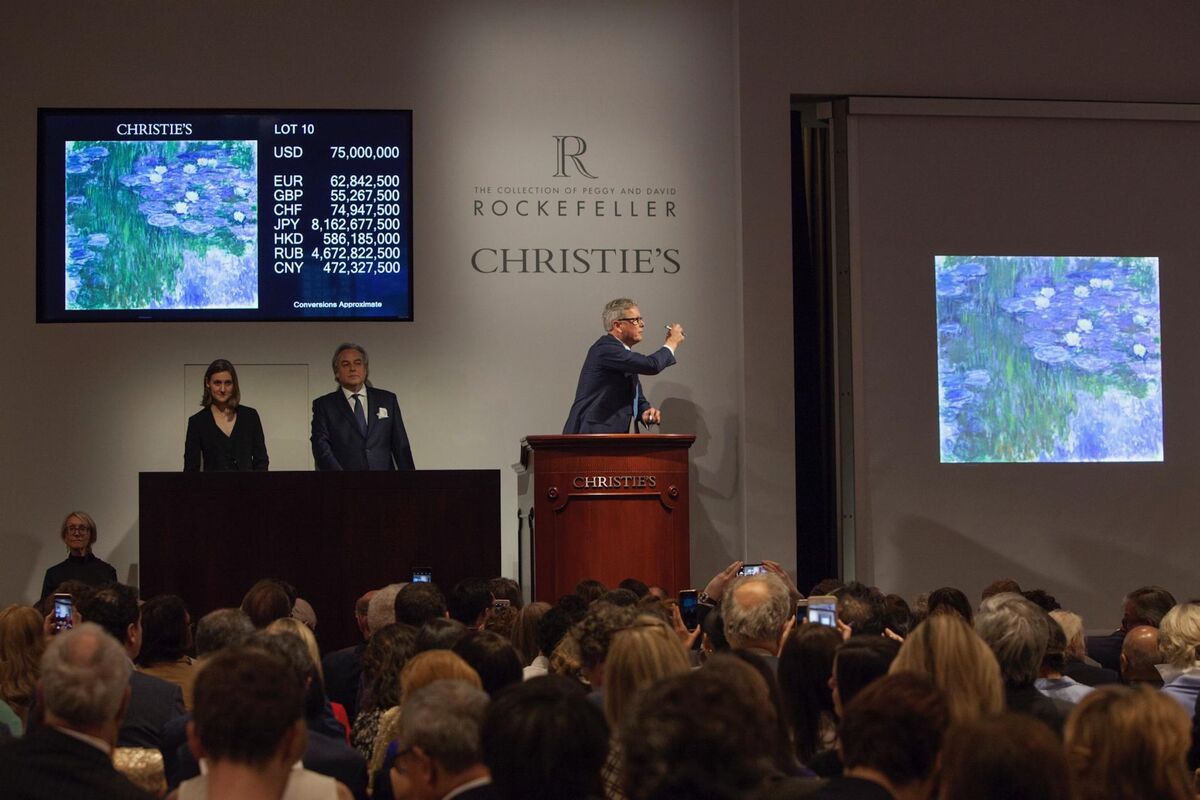 The collection of Peggy and David Rockefeller became the most expensive estate in history on Tuesday night, after an evening sale of 44 works by European masters at Christie’s New York totalled $646 million, including buyer’s fees—making it also the highest-grossing
Impressionist and Modern
sale ever held.
Collectors from all continents were clamoring for the masterworks in the sale, which were acquired over decades by David Rockefeller, the grandson of Standard Oil founder John D. Rockefeller. There were new records for
Henri Matisse
and
Claude Monet
, as well as the $115 million sale of
Pablo Picasso
’s Fillette à la corbeille fleurie (1905), which became the artist’s second-highest price ever achieved at auction. The Matisse, a sensuous nude portrait painted in Nice in 1923, went for $80.75 million, a new high for the artist; and Monet’s Nymphéas en fleur (1914–17) went for $84.7 million, edging out the artist’s record set in 2016, when one of his grainstack paintings went for $81.4 million at Christie’s.
It is rare to see so many top works come to market at the exact same time, but David Rockefeller had an unusually high-caliber collection. When he died last year at the age of 101, after six decades of collecting with a discerning eye and ample funds, his estate wished to raise as much money possible for the charities he supported. The fevered bidding for works from this once-in-a-generation collection set records not just for Monet and Matisse, but also for
Eugène Delacroix
,
Jean-Baptiste-Camille Corot
,
Armand Séguin
,
Giorgio Morandi
, and
Odilon Redon
.
“It’s a good signal about the state of the art market tonight, that great provenance and great teamwork can bring results,” Guillaume Cerutti, CEO of Christie’s, said after the sale. “It’s a defining moment for the art market, but also for Christie’s.” 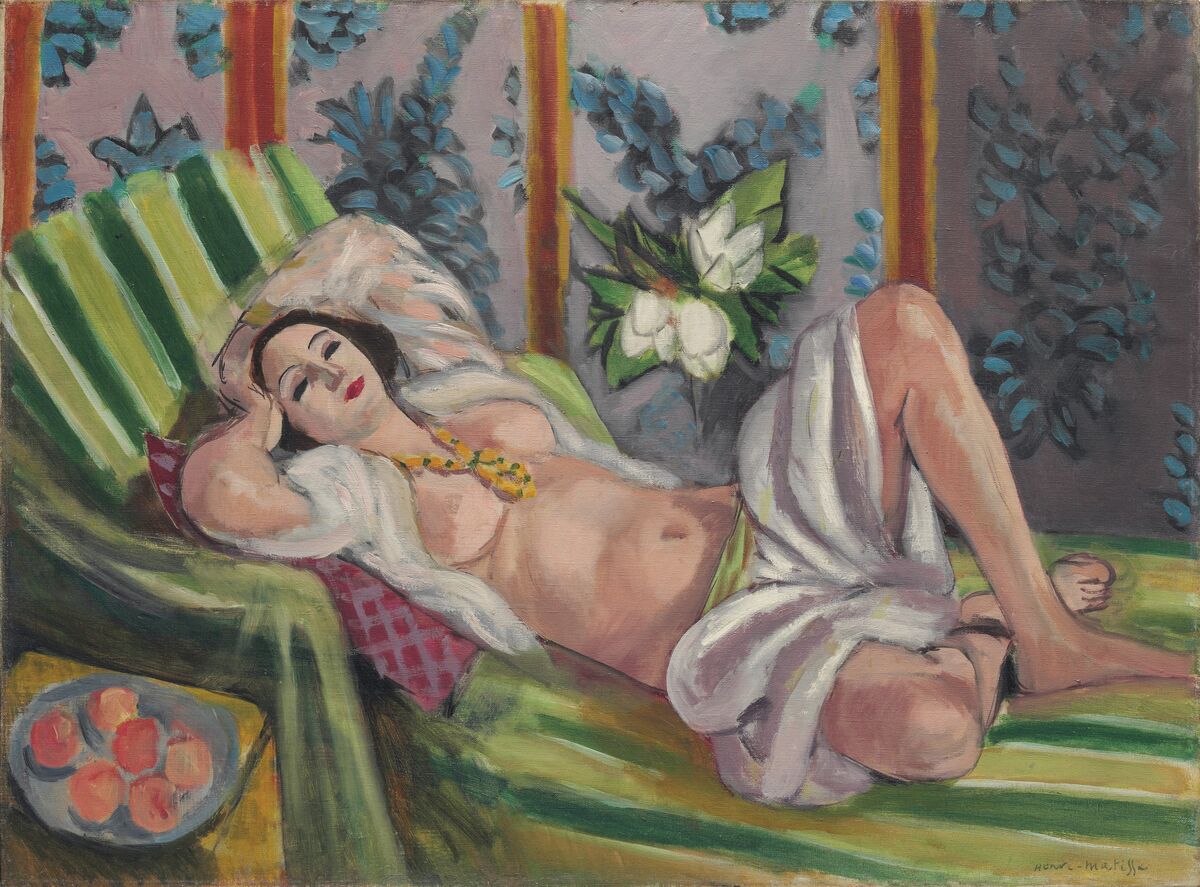 The proceedings had some of the groundwork laid before the sale began. Thirteen of the works had were guaranteed, an arrangement financed by Christie’s or a third party guarantor to ensure the consignor that the work will sell. Guarantees on lots sometimes dampen bidding and detract from the overall excitement of the sale, but in this case, it had an enviable end result: The Rockefeller sale was a rare “white glove” sale, in which every work in the auction found a buyer.
Tuesday’s auction of Rockefeller treasures is the most high-profile happening of a week-long spree of auctions offering up all of the possessions owned by David and Peggy Rockefeller, which runs through Friday. On Wednesday night, Christie’s will host another evening sale, this time of work by artists of the Americas, including
Gilbert Stuart
,
Willem de Kooning
, and
Diego Rivera
. The entire bazaar has been dubbed the “sale of the century,” with some expecting $1 billion in sales of art, antiques, furniture, and collectibles over the course of the week. The previous record for an estate sale—already shattered—was set in 2009, when the collection of fashion designer Yves Saint Laurent brought in $484 million at Christie’s.
It remains to be seen where these masterpieces will land. Jessica Fertig, the head of the Impressionist and Modern evening sale, said bidding came from collectors all over the world, and that some of the work had been claimed by institutions who could announce the purchases in the coming months. Global president of Christie’s, Jussi Pylkkanen, cited Asian collectors as key, accounting for 25 percent of bidding, in his estimate. The record-breaking works by Monet and Matisse were both purchased by bidders on the phone with Xin Li, the auction house’s deputy chairman for Asia; its Asia president, Rebecca Wei, was also bidding on many of the top lots.
“The Asian bidding on the phones was very strong, very strong,” Pylkkanen told Artsy after the sale. “But there were also Asian clients coming to the saleroom and underbidding many works.”
The Christie’s global president, who also served as auctioneer for Tuesday night’s sale, reminded bidders on several occasions that all the proceeds from the sale were going to 11 charitable organizations supported by the Rockefellers, including Harvard University, the Council on Foreign Relations, and the Museum of Modern Art. 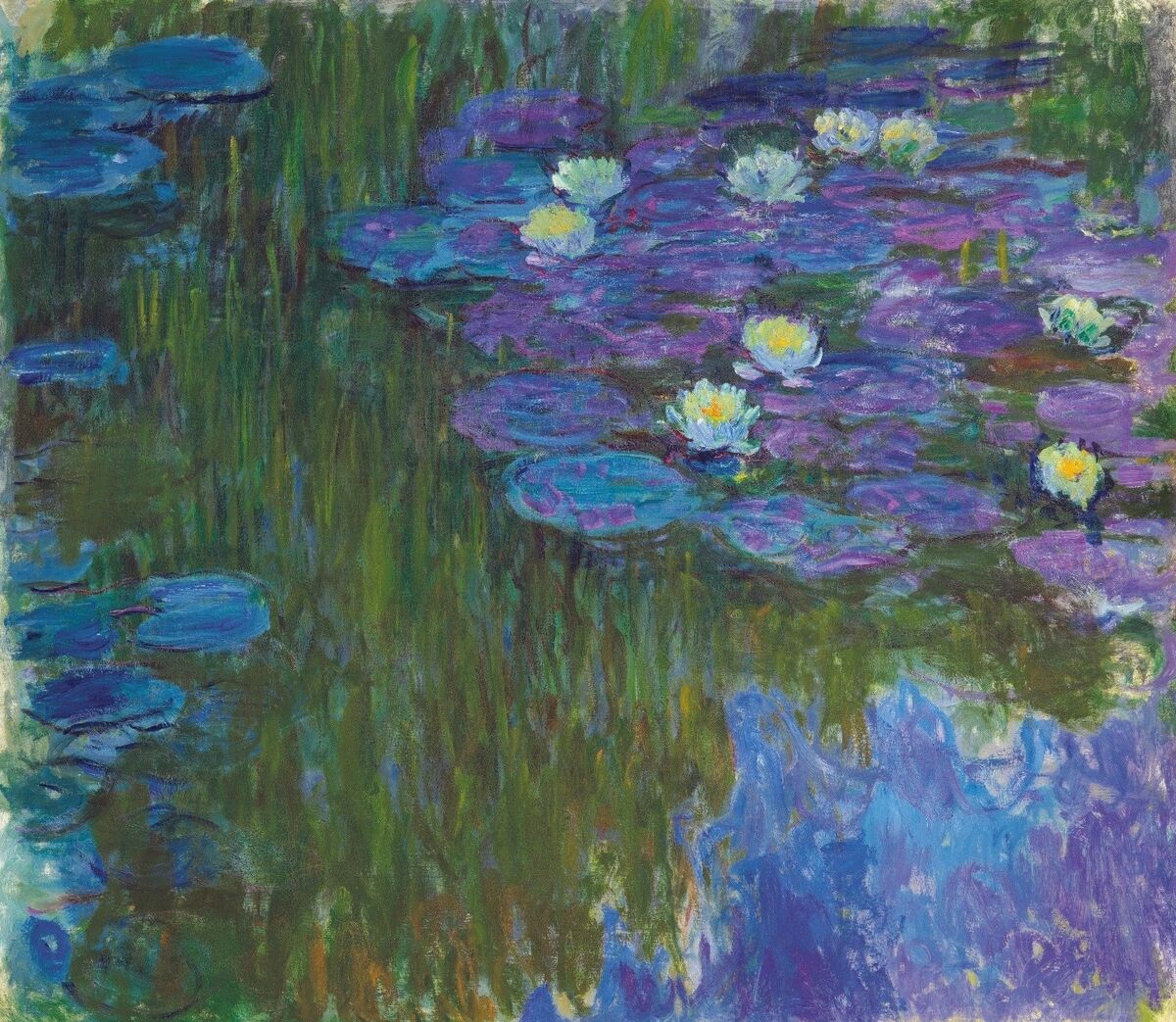 Advertisement
“This is $100 million more than what we were expecting—and, you know, we don’t really brag about these things at Christie’s, but when it’s for charity, I feel like I can say that,” Pylkkanen added.
The Rockefellers chart their fortune back to Standard Oil founder John D. Rockefeller, a foundational American industrialist who some saw as a wealth-amassing robber baron. His descendants have since converted much of their billions to charitable organizations: In a statement written following the sale, David Rockefeller Jr., the late collector’s son, said, “We are now very well on our way to achieving the goal our parents set for their philanthropic legacy.”
MoMA’s director, Glenn D. Lowry, made a rare appearance at an auction Tuesday night, sporting a boldly colored cravat and chatting up Larry Gagosian before the throat-clearing gavel rap at 7:00 p.m. They were just some of the well-heeled members of the art demi-monde present. Collectors Peter Brant and Steve Cohen sat close to the front, flanked by the two prominent dealer-collector families, the Nahmads and the Mugrabis. Dealers Per Skarstedt and Robert Mnuchin wedged themselves into seats amidst a sea of art advisors, there to represent clients in the sales room.
They were there to bid not just on work, but on history, and the opening lot was a clear look at how deeply intertwined the Rockefeller collection is with the burst of Modernism that helped define 20th-century culture. The opening lot of the sale was a tiny Picasso painting of a single apple, made as a gift for the writer Gertrude Stein after she was distraught that her brother, Leo, took a
Cézanne
still life of five apples when they split up the art collection they had assembled. And so Picasso gave the apple painting to Gertrude, one of his early champions, as a Christmas present in 1914, and the accompanying note shows the artist’s warmth for Gertrude, and his brutal desire to unseat the older master: “I paint you one apple, and it will be as fine as all of Cézanne’s.”
Collectors jumped at the chance to own such a talisman, with a dozen bidders in the room and on the phone entering the fray. After a few frenzied minutes, Max Carter, head of the Impressionist and Modern art department at Christie’s, bested a man on the aisles talking into a cell phone with a bid for $3.3 million, or $3.9 million with the buyer’s premium. 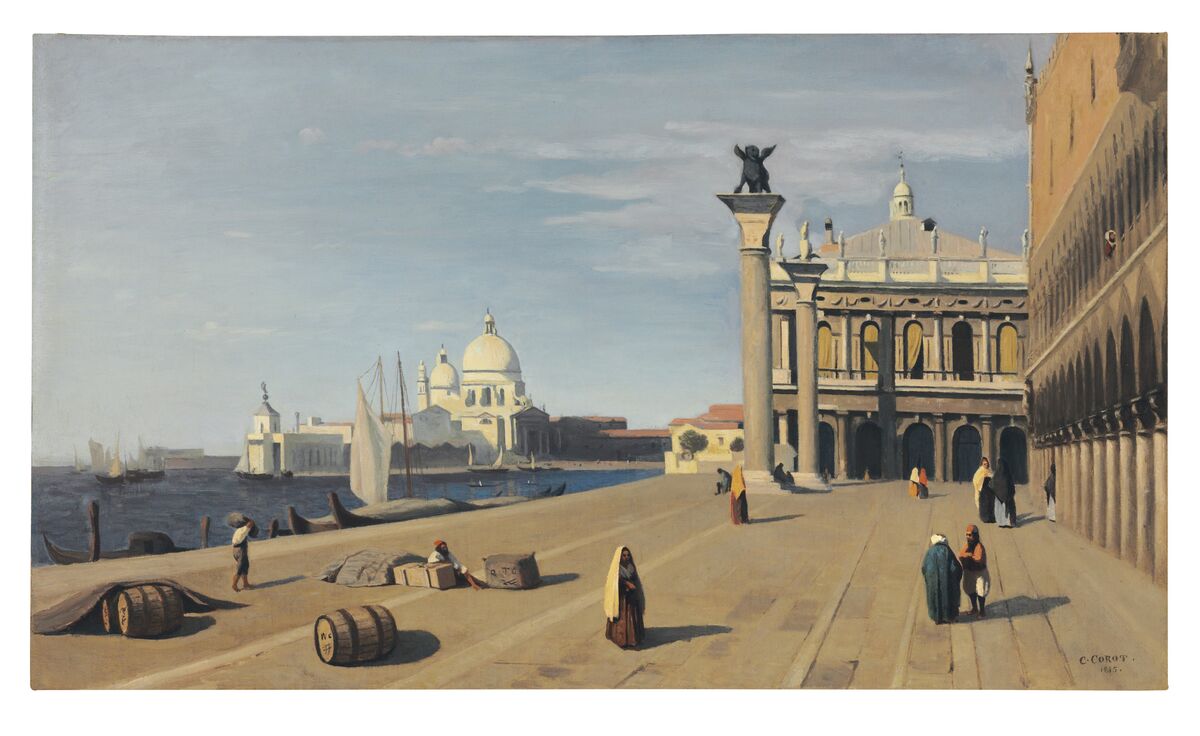 (All prices noted here, unless specified as the hammer price, include the buyer’s premium, which is 20 percent of the hammer price from $250,001 up to and including $4 million, and 12.5 percent of the hammer price when the hammer exceeds $4,000,001.)
A few lots later came the Matisse nude, which held a pre-sale estimate of $70 million. Christie’s touted the work throughout its lush catalogue as one of the greatest works by Matisse to ever come to auction, and one of the finest left in private hands. Bidding began at $58 million, and Pylkkanen offered chandelier bids (bids on behalf of the seller that are allowed to be made up to the lot’s reserve) until post-war and contemporary chairman Loic Gouzer came in at $62 million. Gouzer then had to one-up Wei, until Xin Li, the deputy chairman for Asia, came in with a bid for $70 million that could, perhaps, secure the Matisse. Gouzer managed to get in a bid for $71 million, but Li quickly went to $71.5 million, where it hammered.
Asian collectors were not done for the evening. Just two lots later came Monet’s Nymphéas en fleur, which had an estimate in the area of $50 million, but quickly eclipsed it as multiple Christie’s specialists on the phone remained in play as the bidding rolled past the $60 million mark.
“It’s like a tennis game with five rackets!” Pylkkanen exclaimed to the rapt sales room. Li once again had to fend off a colleague, this time Francis Outred, the head of post-war and contemporary art at Christie’s London. After Li hit the $70 million threshold, Outred casually bumped up to $71 million. Li rallied with a $71.5 million return, and after Outred offered a $72 million bid, Li leaped to $75 million, ending the conversation and forcing down the hammer. The final price of $84.7 million including fees was well above the work’s $50 million estimate. Ahead of the bellwether New York sales that happen at Christie’s, Sotheby’s, and Phillips next week, the sheer amount of bidding on the lot is indicative of where there market is at the moment, attendees said. When stopped outside following the sale, the Upper East Side dealer Emmanuel Di Donna—himself a former Sotheby’s global vice chairman—said that during the fight for the Monet, when you combined all the bids, “there was $400 million of available money for a picture like that.”
“Clearly, there’s a lot of depth in the market, if that many people were bidding at the level,” Di Donna said.
One lot that didn’t have the expected bidding fireworks still became the night’s top seller: Picasso’s Fillette à la corbeille fleurie (1905), a striking depiction of a young naked girl holding brightly colored flowers. Its original estimate of $70 million was adjusted to $120 million by April, but, tellingly, it was listed as “in the region of $100 million” in the materials handed out at the sale. Even if the provenance was impeccable—it was the first work by Picasso purchased by Gertrude and Leo Stein, and many say the first major sale of Picasso’s young career—some had their doubts as the sale date approached. As Rebecca Wei, the house’s Asia president, told Bloomberg ahead of the sale, “I had so many top collectors looking at the piece, saying, ‘Mmm…I don’t know, she has a haunted look—I like the Matisse much better.’”
Sure enough, when bidding opened, it was sustained by a single bid from Gouzer, as Pylkkanen was unable to conjure any Asian bidding. 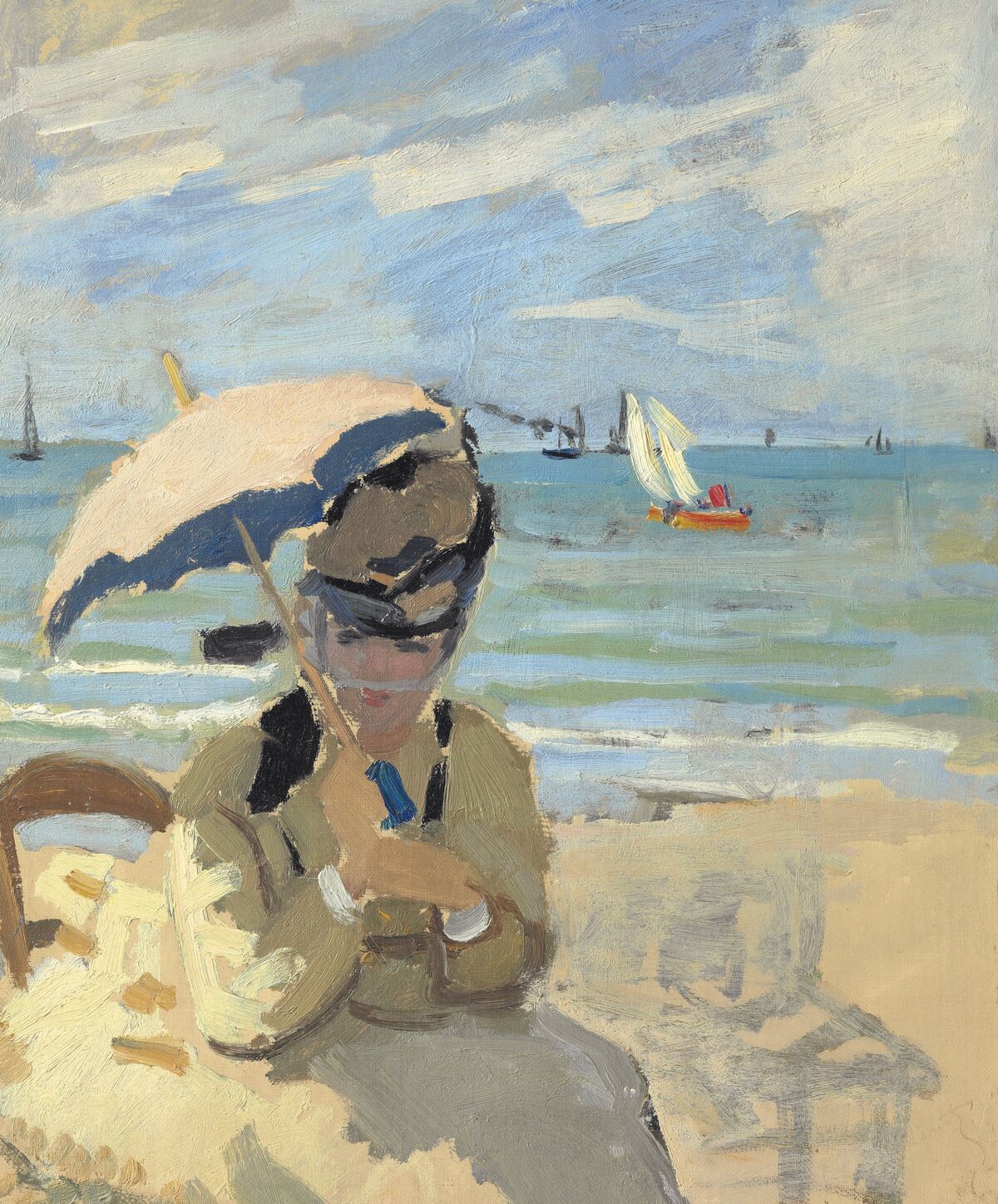 “It wasn’t my favorite work of the night, so it did about what I expected it to,” said Henry Wyndham, a former chairman at Sotheby’s who now works at an art advisor. He added that he had made a bet with a friend against the Picasso performing well, and that he won a “big expensive dinner” for shorting it.
Similarly, Di Donna said of the Picasso, “It’s a great painting, but it doesn’t have the sexiness of a
Modigliani
, or one of [Picasso’s] bigger works.”
Asked about the Picasso result, Jessica Fertig, the head of the night’s sale, told reporters afterwards that the house—and the work’s new owner—could not be more satisfied. It is, after all, the second-most expensive Picasso ever sold, and one of the dozen most expensive works ever sold at auction.
“We’ve become somewhat blasé when a work sells for over $100 million,” Pylkkanen said.
Nate Freeman
Related Stories