Claire Voon
May 5, 2020 5:58pm
Artists are sheltering at home, and despite the disruptions to their lives and limited access to materials and space, many still feel an urge to create. Some are making works that respond directly to the coronavirus pandemic; others, now with unexpected spare time, are realizing suspended projects that have nothing to do with the developing global crisis. We spoke with seven artists about how their practices are helping them find solace and meaning in this period of uncertainty and paralyzing anxiety. 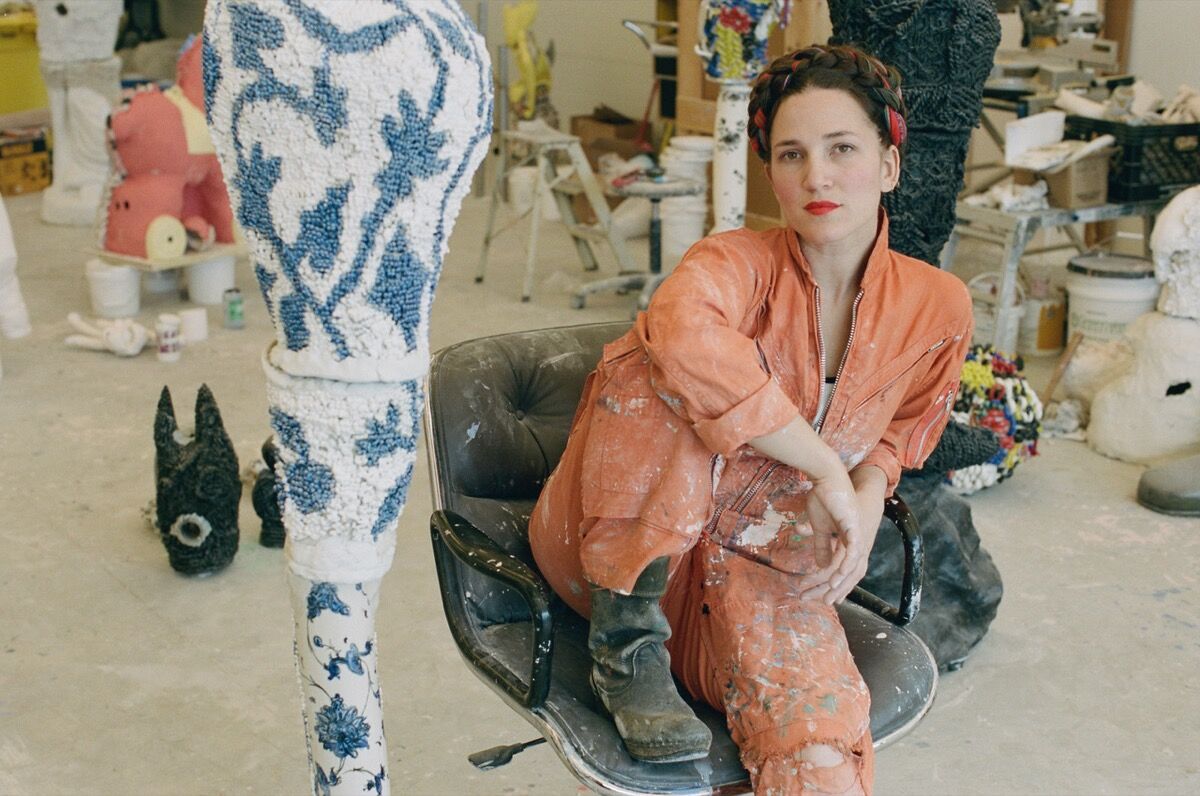 Portrait of Francesca DiMattio by Matt Jones. Courtesy of the artist.

Between nursing a four-month-old, homeschooling a four-year-old, and caring for her husband, who has COVID-19, Francesca DiMattio has still found time to create. DiMattio, who is best known for her complex ceramic sculptures that marry sundry cultural and historical references, has been spending five hours a day in her home studio in Hillsdale, New York. With her husband self-quarantined in his own studio, both kids join her. While carrying her infant daughter in her arms, DiMattio has sculpted a chandelier and has been creating grids made of painted tiles; she’s also been building porcelain cups and dishes with her son, who glazes the vessels in cobalt. 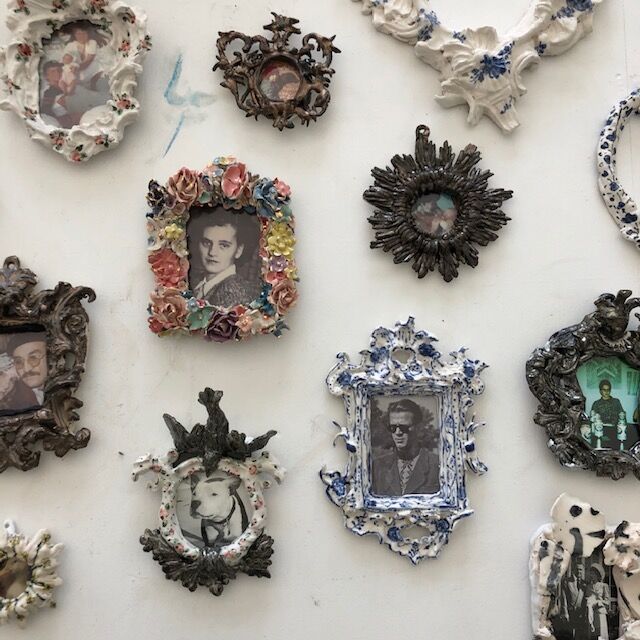 Advertisement
The quarantine period has compelled DiMattio to find teaching moments in everyday challenges. “Both requiring your hands and attention, motherhood and one’s studio practice are in direct opposition to each other,” she said. “I have been determined to find ways for them to enrich one another.” Recently, she began working on a new project, making frames out of materials such as Legos and nails to construct a family tree and visual pet cemetery. The process has inspired her son to experiment with techniques, but it’s also helped DiMattio cope with her anxiety and fear.
“I have never really appreciated how much I needed art for my mental well-being,” DiMattio said. “Working has been centering. Completing something when everything else feels so up in the air is grounding.” 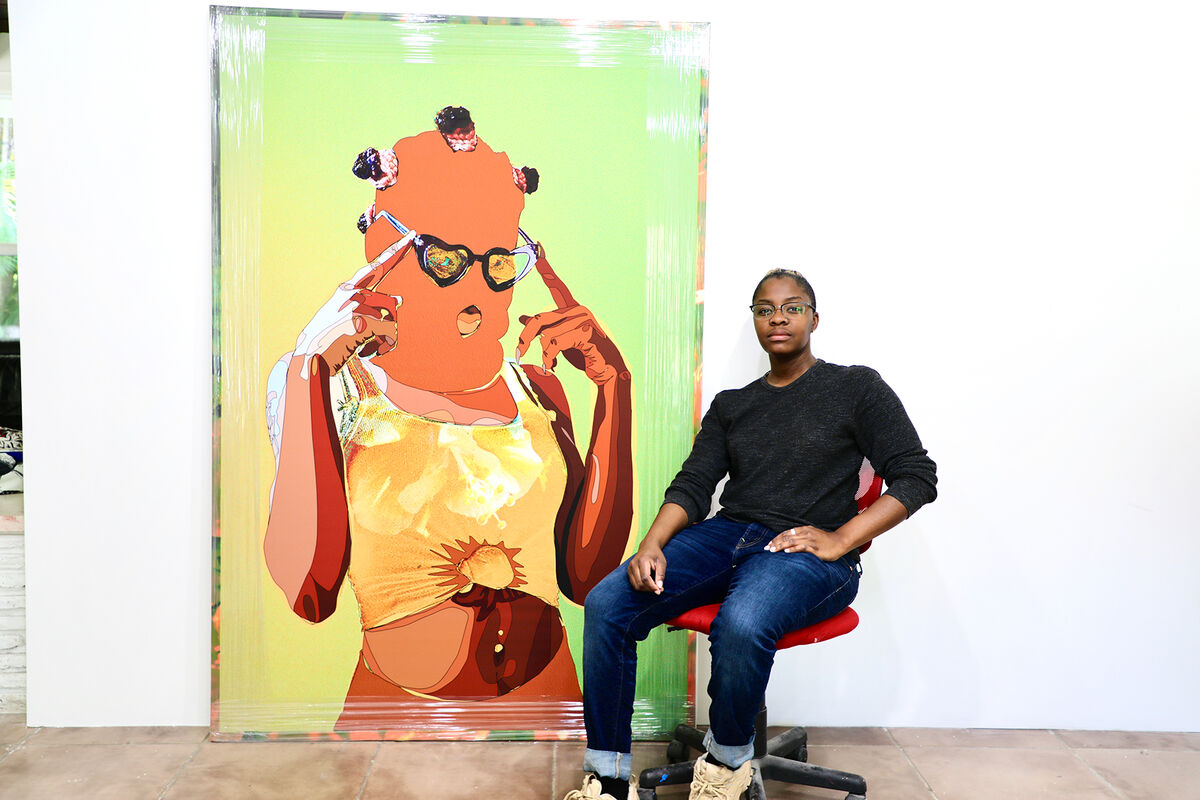 Portrait of Amani Lewis with What it do Baby!? (portrait of Baby Kahlo), 2020. Photo by Alex Nunez. Courtesy of the artist and Fountainhead Residency.

In March, Baltimore-based artist Amani Lewis moved to Asheville, North Carolina, to take care of their partner, who recently underwent surgery. At the same time, Lewis has been supporting their community by selling portraits they made of their friends and other Black individuals, giving proceeds to loved ones who have lost work due to COVID-19. Using the house they’re staying in as their studio, they’ve continued to make collages with whatever material is at hand, from magazines to yarn.
“What I do for my community will not change because the world around me does,” Lewis said. “I just have to find a new way to navigate a very tough situation.” They have finalized a few sales so far, including a major one from a Swedish gallery that earned them around $30,000. Most of the portraits they’re currently selling are priced between $2,000 and $5,000. 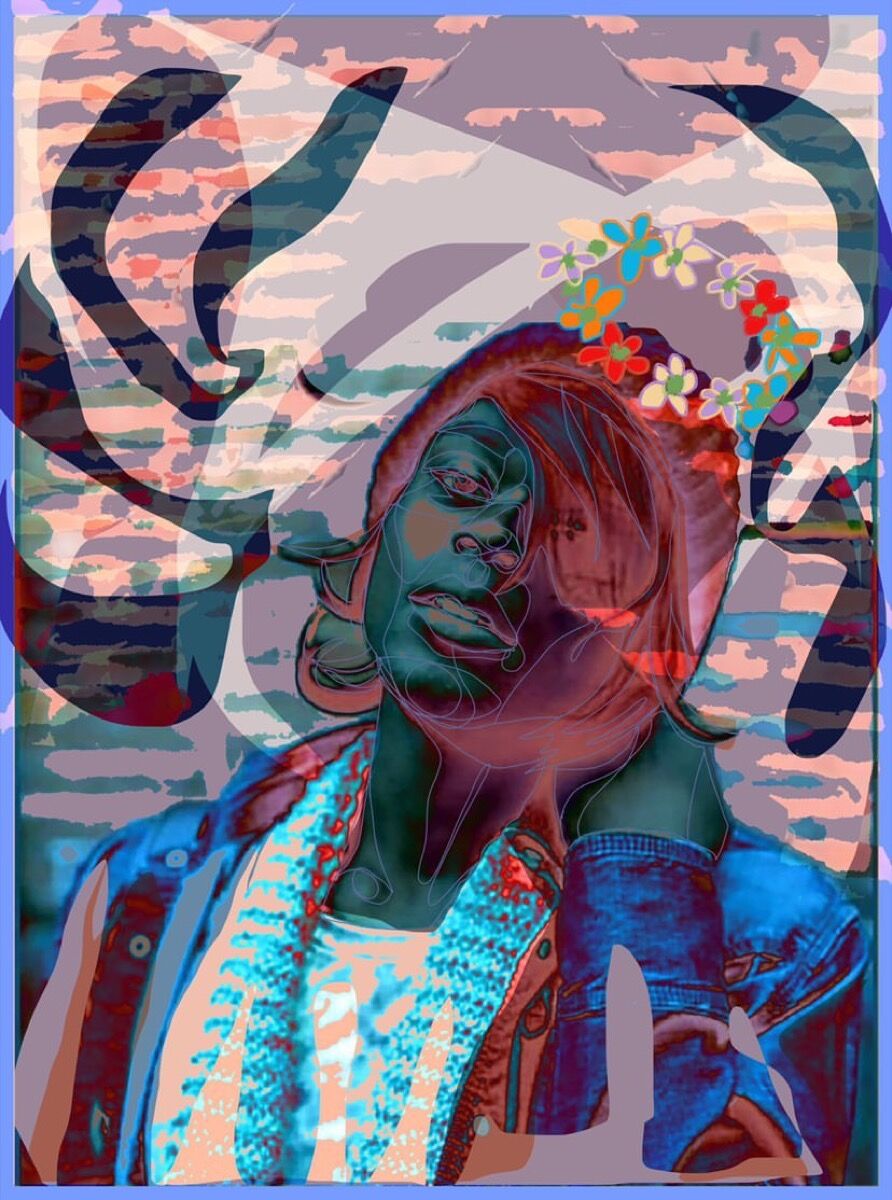 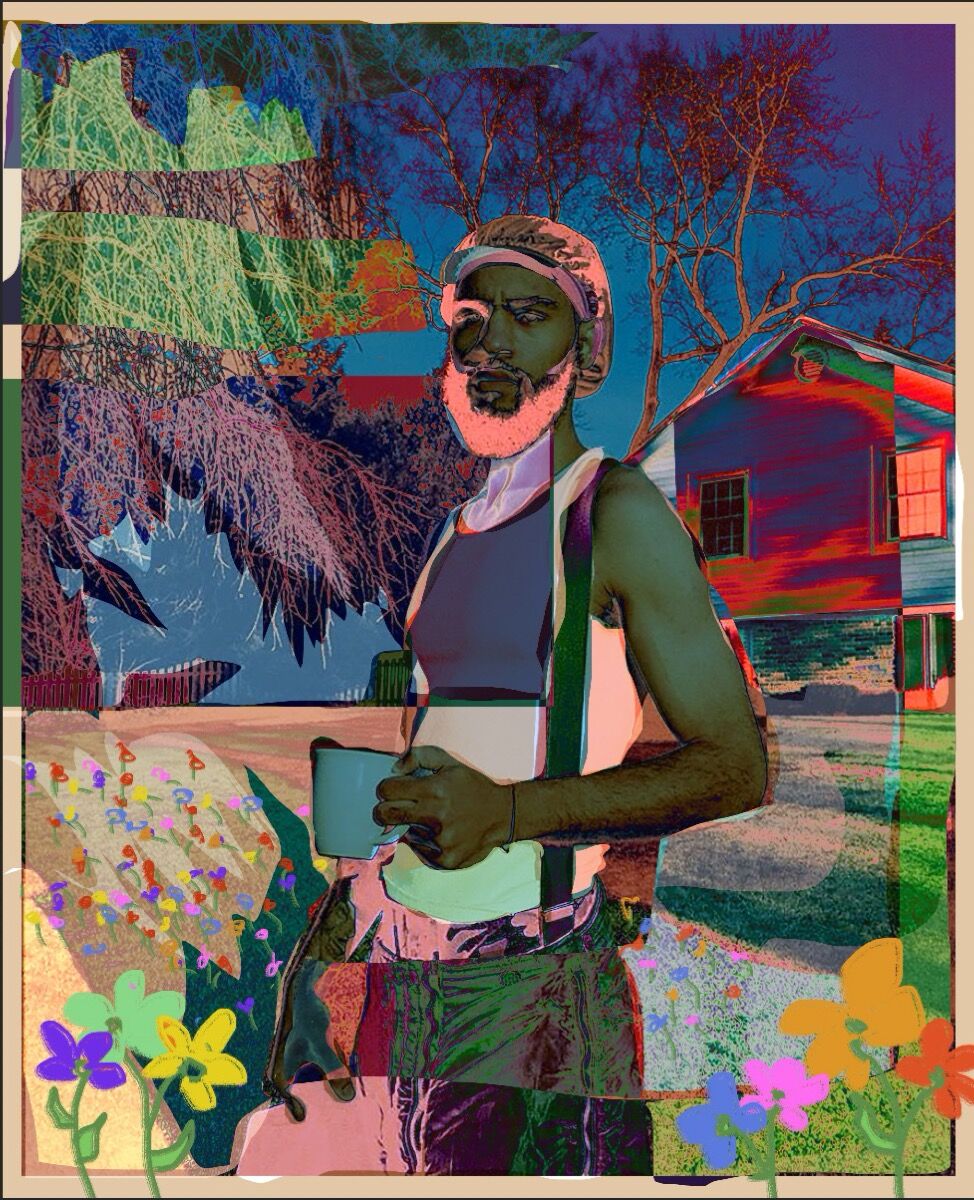 Having to practice social distancing has been particularly hard for the self-described social butterfly. “I need to engage with people and incorporate those moments and conversations into my work,” Lewis said. “Feeling disconnected to people and feeling like that is what needs to happen to protect them is a wild concept.” Still, they’re finding hope in their temporary environment of Asheville, finding beauty in the surrounding greenery.
“It’s amazing to see in this springtime of illness and death,” Lewis said. “There is life all around me, I will keep that in mind as I work.” 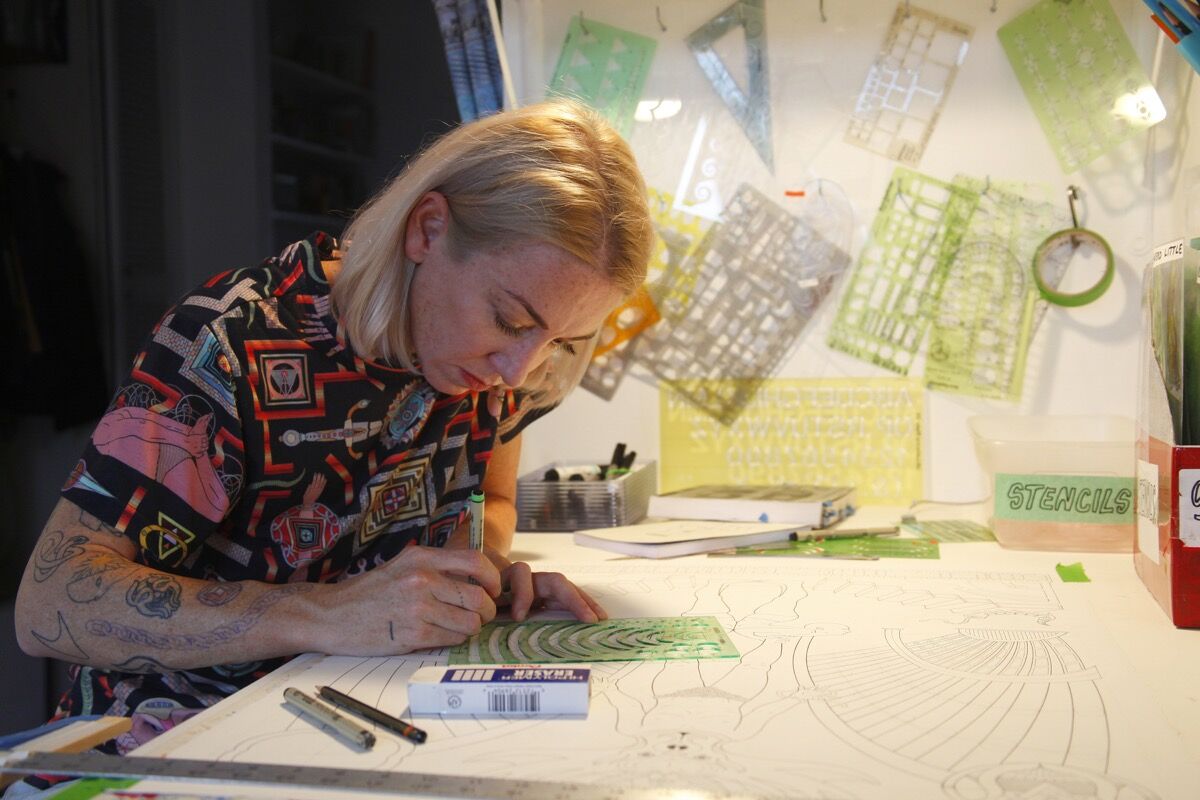 Portrait of Jess Johnson by Dex R. Jones. Courtesy of the artist.

In the front room of her Red Hook apartment, Jess Johnson has been drawing humanoid figures, hybrid beasts, and psychedelic patterns to try and quiet her mind. “There’s only so much anxiety you can manifest about things you have absolutely no control over,” she said. “But I do have complete control over the world in my drawings, and that’s always been important to the psychology of why I do it.”
All of her forthcoming exhibitions, projects, and commissions have either been canceled or postponed. Free of the administrative duties that come with an art practice, Johnson has taken this opportunity to reflect on why she loves making art. “All I had been desiring was more time to draw, and now I have all the time in the world,” she said. “So many artists, myself included, produce artwork with an outcome in mind, such as an exhibition or career step. And removing that outcome can perhaps free us to experiment and create art that connects us to the universalities of being human, as opposed to ‘professional artists’ operating within the structures of a commercial art world.” 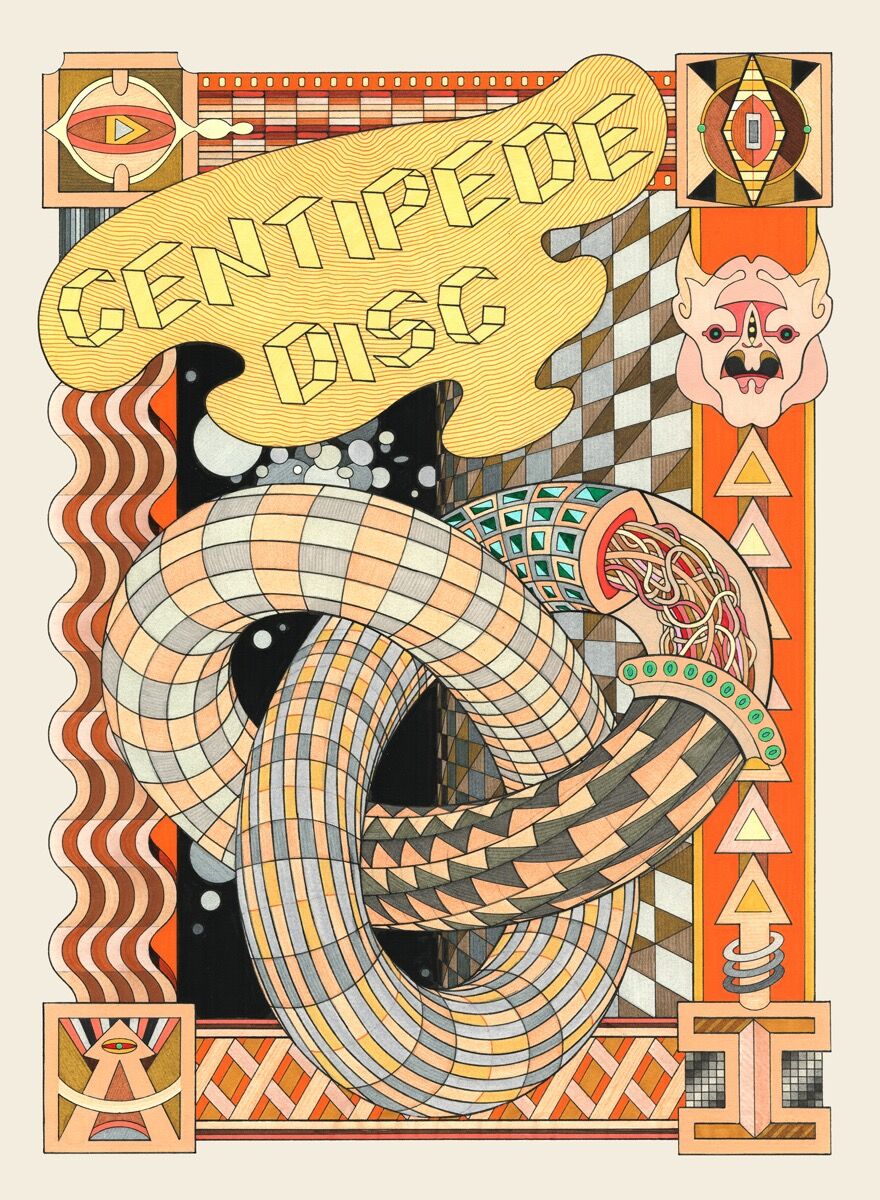 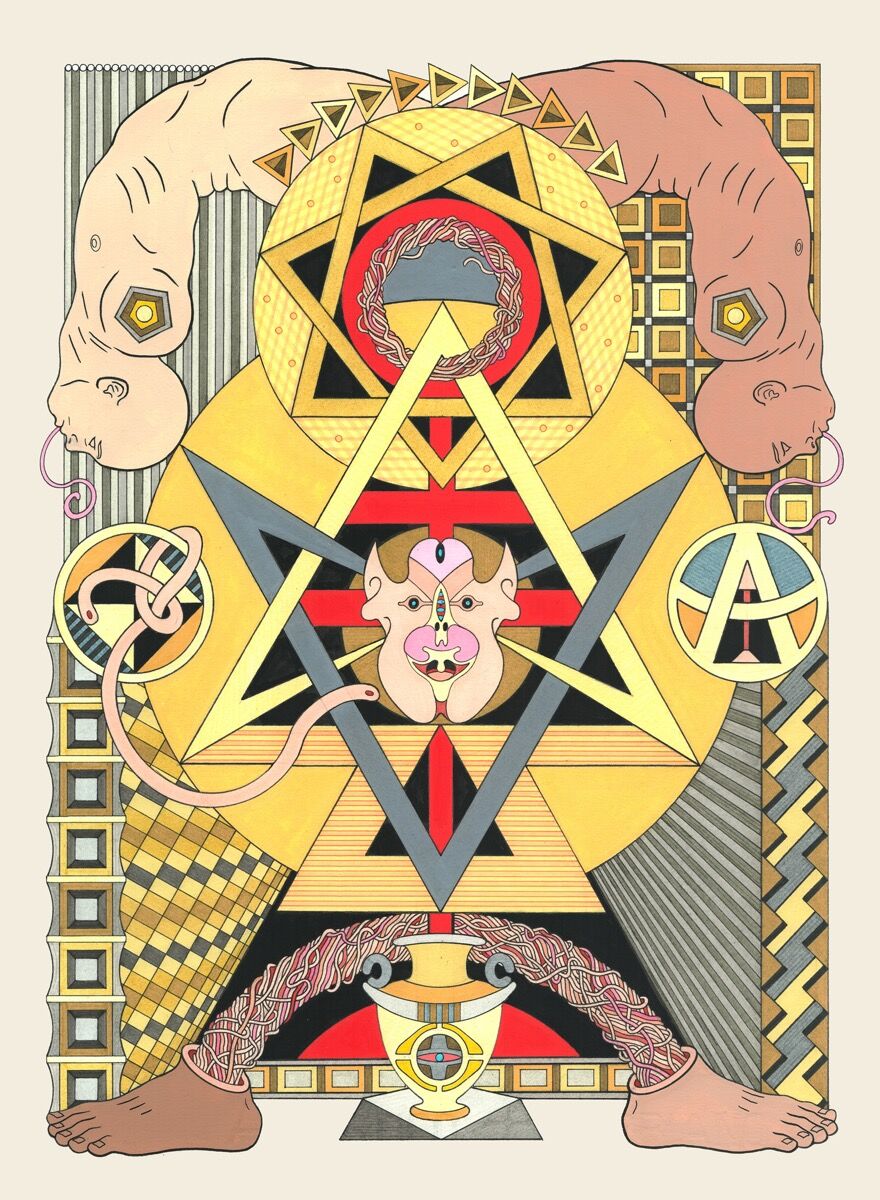 Jess Johnson, Hook Us with Unpleasure, 2020. Courtesy of the artist.

One project she’s taken off the backburner: a deck of playing cards she’s designing with her quarantine buddy, Bobby. Like many of Johnson’s other works, which range from textiles to animation, the cards are teeming with arcane symbols, each suit a futuristic rune. Selling the finished decks will be one way to support herself. Johnson is acutely aware of the likelihood that usual sources of income may not be viable in the future.
“I’m keen to make more affordably priced merchandise that I can sell directly to people, as that’s something that I can control, and I don’t have to depend on the commercial gallery system,” she said. “All I need is Instagram.” 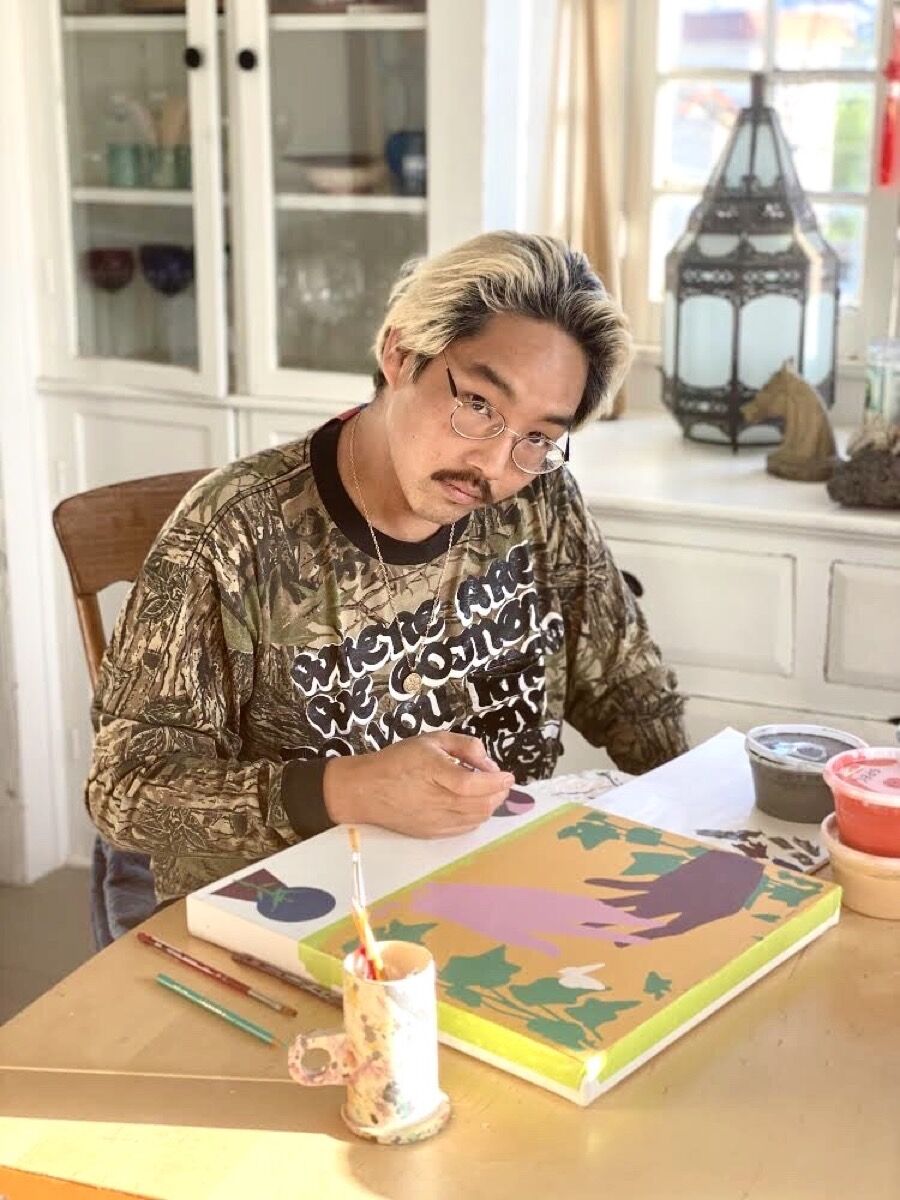 Portrait of Greg Ito, 2020. Courtesy of the artist and Anat Ebgi, Los Angeles. 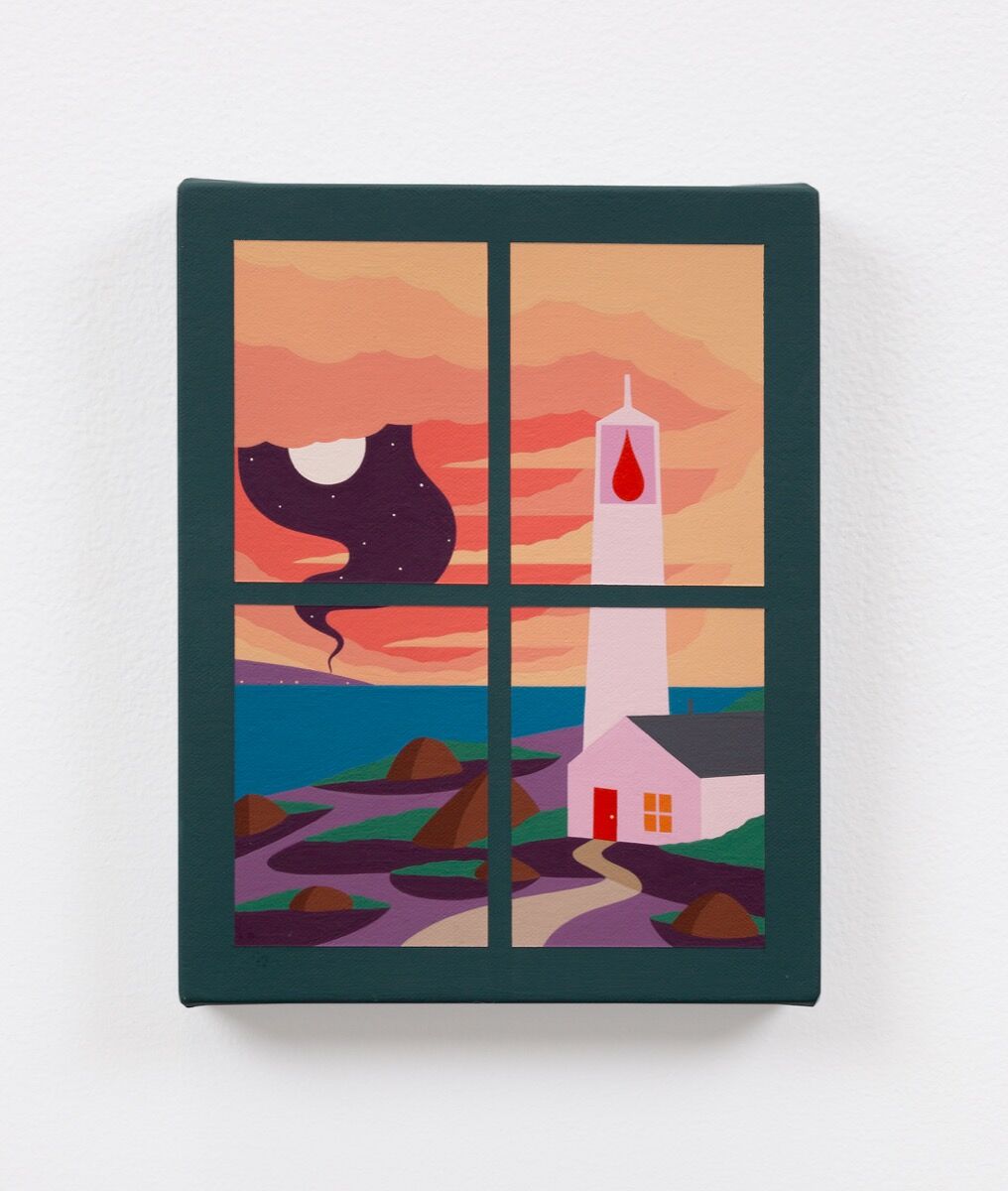 Since March 15th, the day he began his lockdown at his home near Los Angeles’s Chinatown, Ito has been painting small apertures to other worlds: windows and keyholes, through which lie dreamlike views of unnamed lands. They are compact riffs on motifs that frequent his works, which often look like fairy-tale scenes—were it not for the presence of fires and ghostly hands that imbue them with palpable tension.
Ito has been painting at home to be with his wife and dog, though he visits his studio to fetch supplies. Working at his dining room table, he has been preparing for a solo show at Anat Ebgi, sketching out familiar symbols that have taken on new significance since quarantine. “Not being able to go outside or see our loved ones brings new narratives to explore,” Ito said. “Even the hands in the vignette paintings grew a new meaning as we are instructed to not touch one another or our surroundings.”
Motivation has come, in part, from his family history. Ito has been thinking about his grandparents and great-grandparents who were among more than 100,000 Japanese Americans sent to internment camps established by the U.S. government during World War II. “To know that they endured years of fear and hatred and continued to live and cultivate a beautiful life and family is incredibly uplifting,” Ito said. “It gives me hope that things can get better and that people can persevere.” For now, he added, “My practice is my place for refuge and self-reflection.” 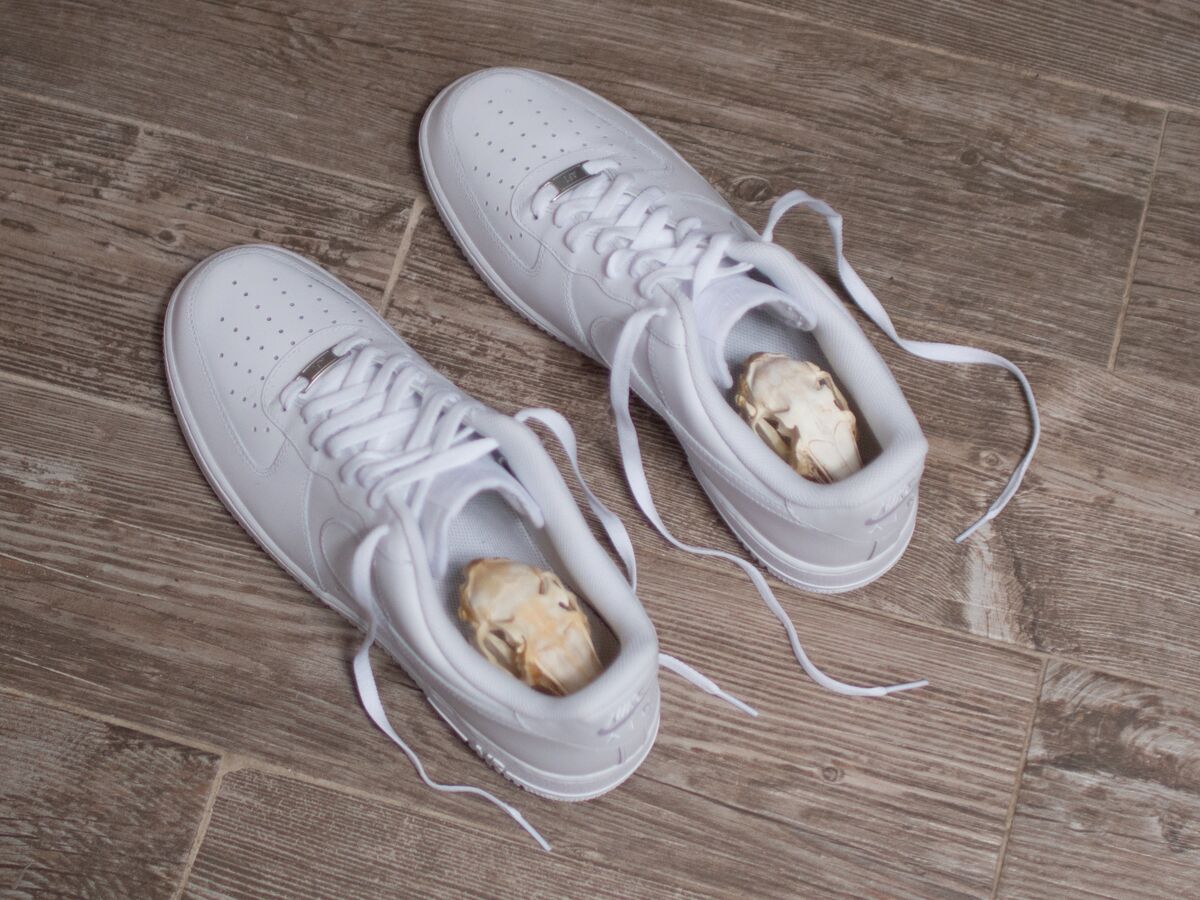 When Quay Quinn Wolf heard that New Yorkers would have to follow a stay-at-home order, he went to his studio in Harlem to gather materials—scraps of soft leather, industrial scissors, a sewing needle, and thread. A week later, isolated in the Brooklyn apartment he shares with his partner, Wolf began working on a sculpture to process his emotions.
“I began grappling with my own thoughts of mortality and the human condition and what those thoughts looked like,” Wolf said. A trip to his neighborhood hardware store turned up stainless steel cable ties, steel sheet, and electrical metallic tubing, which he partially wrapped in hand-stitched leather scraps. All this he assembled into some semblance of a body: The tubes curve in a neat row, like fishbones; the brown fabrics cling to metal like carrion. Resting on the stark steel sheet, the arrangement feels simultaneously clinical and tender.
Wolf often pairs ready-mades with organic material, creating associations that aim to dissect memory and associated trauma. Although his process has been altered by his restricted resources, he continues to produce “out of necessity.” He recently finished another piece, one involving rabbit skulls tucked into a pair of unlaced Nike Air Force 1s. “I find that I am most active in the studio when my anxieties are heightened,” he said. “Upon completing a work I feel a bit lighter.” 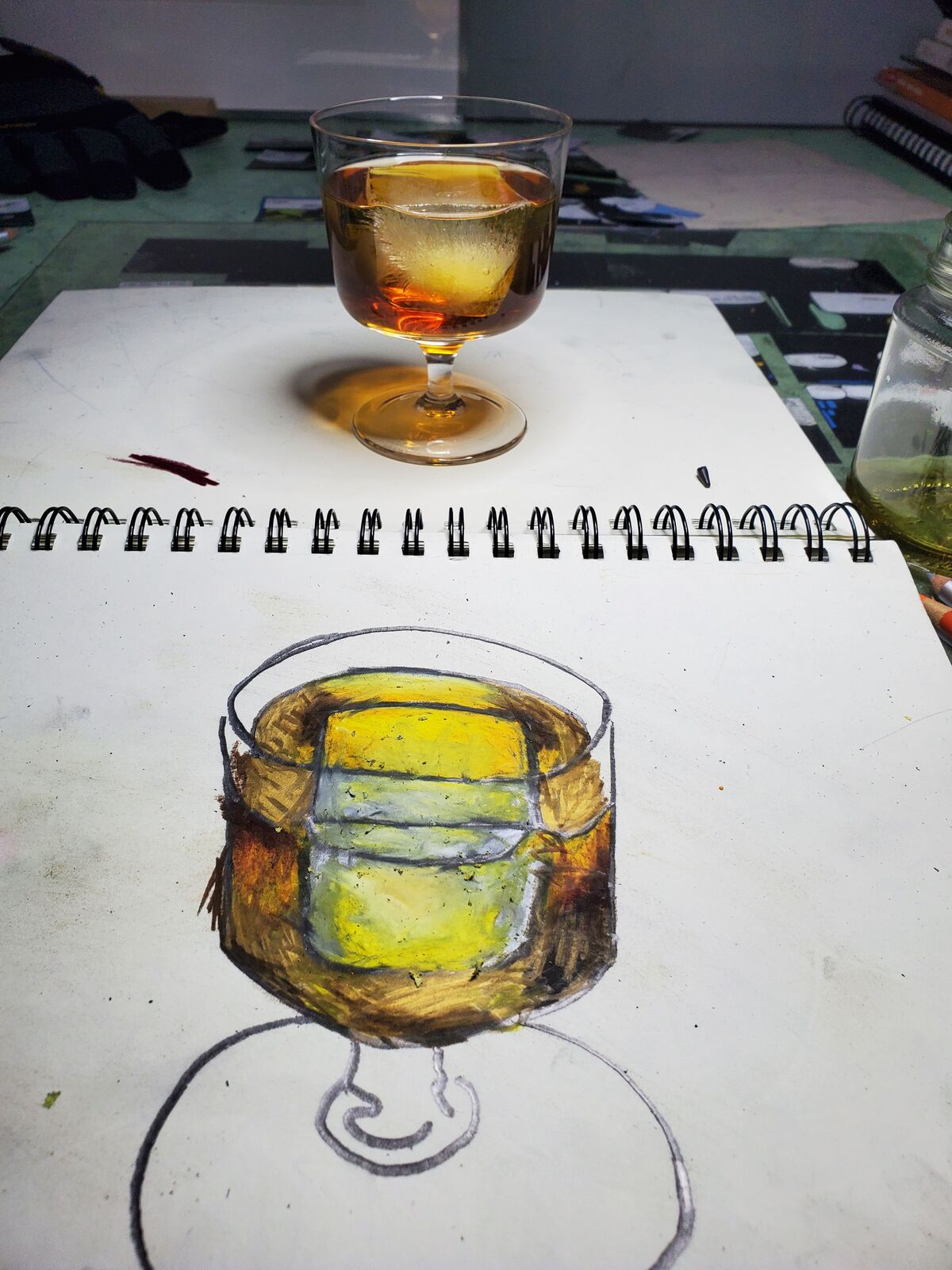 
This month, Tony Lewis was scheduled to debut new works at Blum & Poe’s New York gallery, but the exhibition has been postponed until further notice. Glimpses of some of those drawings have made their way onto his Instagram account, where Lewis has also been sharing snapshots of his lockdown life in Chicago. Splitting time between his home and studio building, he has been working on drawings, including some wherein he alters the text and images in Calvin and Hobbes comic cells.
“I’m sort of immediately back to the literal drawing board, while finished exhibition objects and concepts float aimlessly,” Lewis said. “It’s a funky place. I’ve got drawing ideas happening at the moment that are nine years old, others that are five, and quick riffs off of current ideas that help me think about drawing in different ways.” 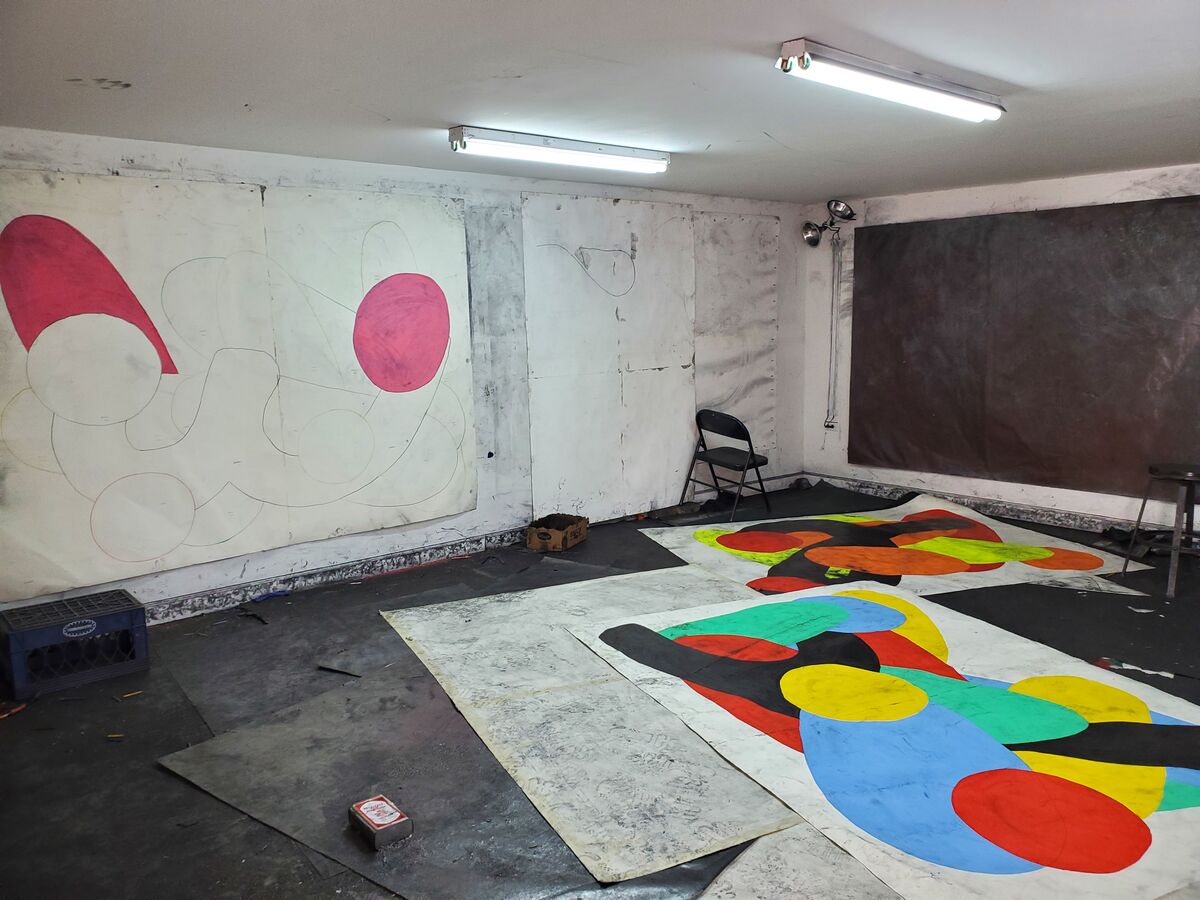 Art has been a way for Lewis to fight cabin fever, as has mixing cocktails, spending time with his girlfriend, and watching Key & Peele. While finding focus has been hard, he’s been able to work an hour or so at a time as he falls into new routines. “I think I’m loosening up and settling into the current reality,” Lewis said. “Artists tend to fight with self-discipline on a daily basis, and now more and more people are having to deal with it. Finding a sense of daily rhythm that lowers anxiety and stress feels like a good thing—no matter how weird one’s system may seem.” 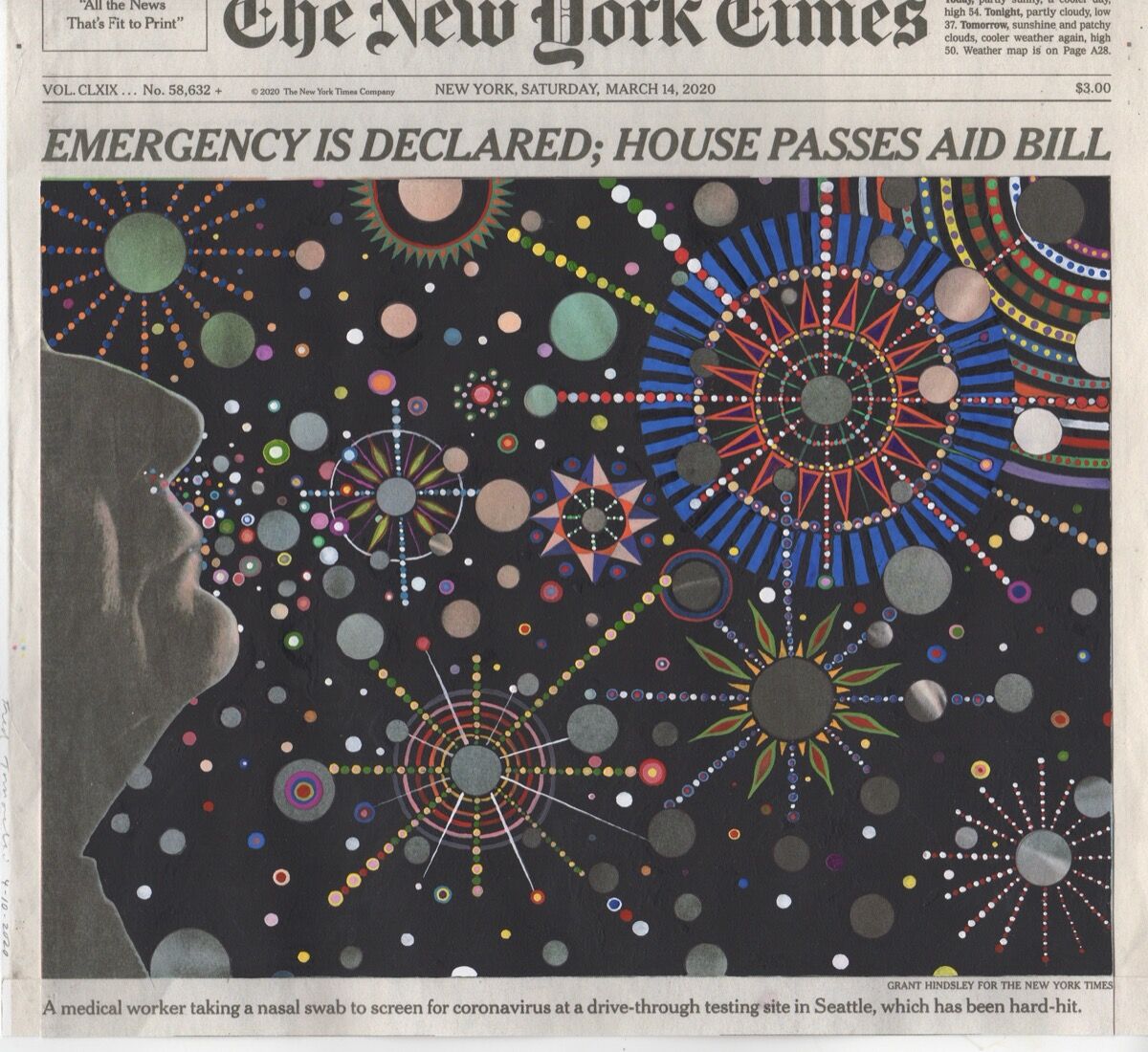 Quarantining at home in East Williamsburg, Fred Tomaselli has occasionally been reworking the front pages of the New York Times. On the March 14th issue, he transformed a photograph of a medical worker taking a nasal swab into a hypnotic collage of suggestive, spiky spheres. On the March 16th issue, he painted a vibrant rainbow over a photograph of an empty Grand Central. Immediate responses to the current climate, they continue Tomaselli’s interest in altering page one of the Times, which began in 2005 with a photograph of convicted Worldcom CEO Bernard Ebbers.
“It’s both a refuge from, and a deep dive into, our new collective reality,” Tomaselli said of creating during the pandemic. “The refuge comes when I lose myself in the process.” Still, it’s slow-going, as he’s often distracted by the enormity of the crisis. Outside his studio, he passes the days by fixing things around the house, working in the garden, and cycling to his East Village studio as exercise. “I do a little of this and a little of that,” he said. “But what I really want to do is go back to the bedroom studio and wrestle with this unprecedented, sad, and scary moment.”
Claire Voon
Related Stories

5 Artists on the Influence of Mark Rothko