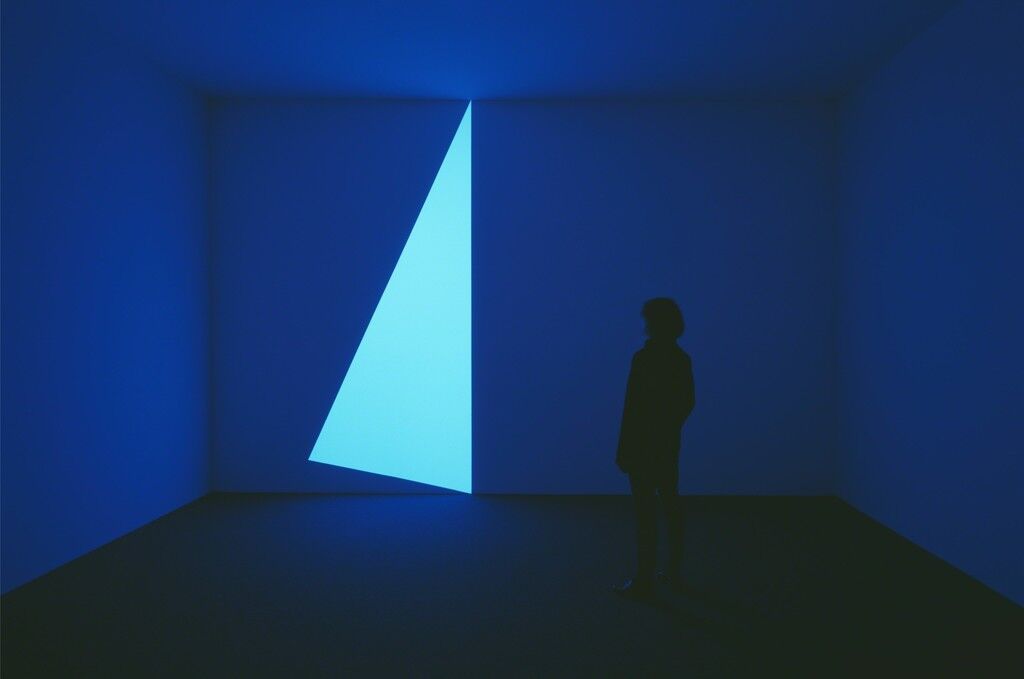 Originally trained in painting,
Dan Flavin
ultimately became a pioneer of light art. He first conceived of incorporating lights into wall-mounted works in the early 1960s, and soon insisted upon commercial fluorescent tubing as a stand-alone medium—a radical challenge to traditional perceptions of the materials that are worthy of art.
His glowing, hard-lined sculptures became increasingly complex over time, eventually evolving into fully immersive light environments. Flavin’s concern was not only with lights, however, but also with the areas around them. He forged new ways of thinking about interior space, structuring the ways in which viewers experienced it, and moved through it.
Other early titans of light art have also helped to break new ground for this medium.
Keith Sonnier
’s neon works brought a softer, more figurative effect, referencing the natural world in compositions of bent and curved tubes of light.
James Turrell
, meanwhile, has used his background in perceptual psychology to explore light as an object that has volume, as well as perception as an artistic medium in itself.
In 1984, Turrell and
Robert Irwin
each received MacArthur Genius Awards—notably in the field of  three-dimensional visual art. For his part, Southern California-born Irwin helped initiate the
Light and Space Movement
and envisioned light-based art that acclimated to its location, existing to heighten viewers’ understanding of the environment in which it was displayed.
But light hasn’t only been used to explore environmental space and perception. The following seven artists build on this legacy as they create light-based works that engage deeply with contemporary issues and carve a space for diverse artistic viewpoints. 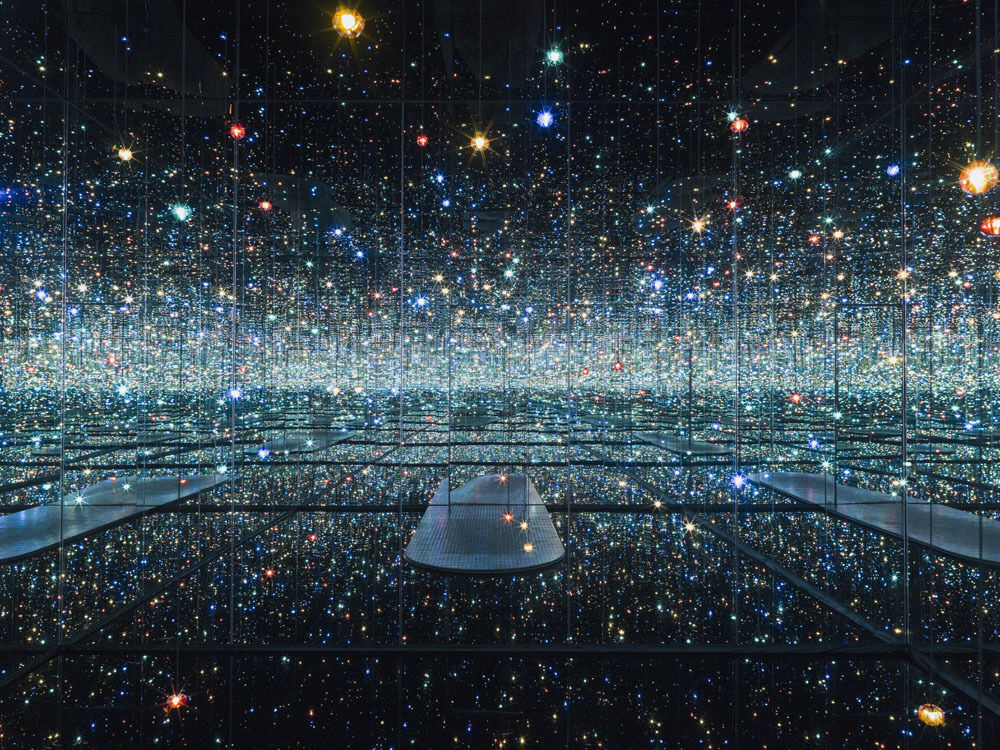 Yayoi Kusama
Infinity Mirrored Room - The Souls of Millions of Light Years Away, 2013
"The Inaugural Installation" at The Broad, Los Angeles
In cities from Los Angeles to Moscow, visitors have queued up in droves for a few moments inside Kusama’s immersive rooms, which she has created since the ’60s. Each featuring mirrored walls and multiples of one type of object, the spaces explore infinity and repetition. These are ideas with which Kusama has long engaged in order to both articulate and exorcise the visual hallucinations that she has experienced since childhood.
She has described the limitlessness of her own body as it melds with her environment and, by extension, the desire to erase the self. The rooms play on these sensations, and in many of them, lights intensify the effect—whether they illuminate dozens of sculptural pumpkins from within or create a glittering universe of hundreds of multi-colored stars. 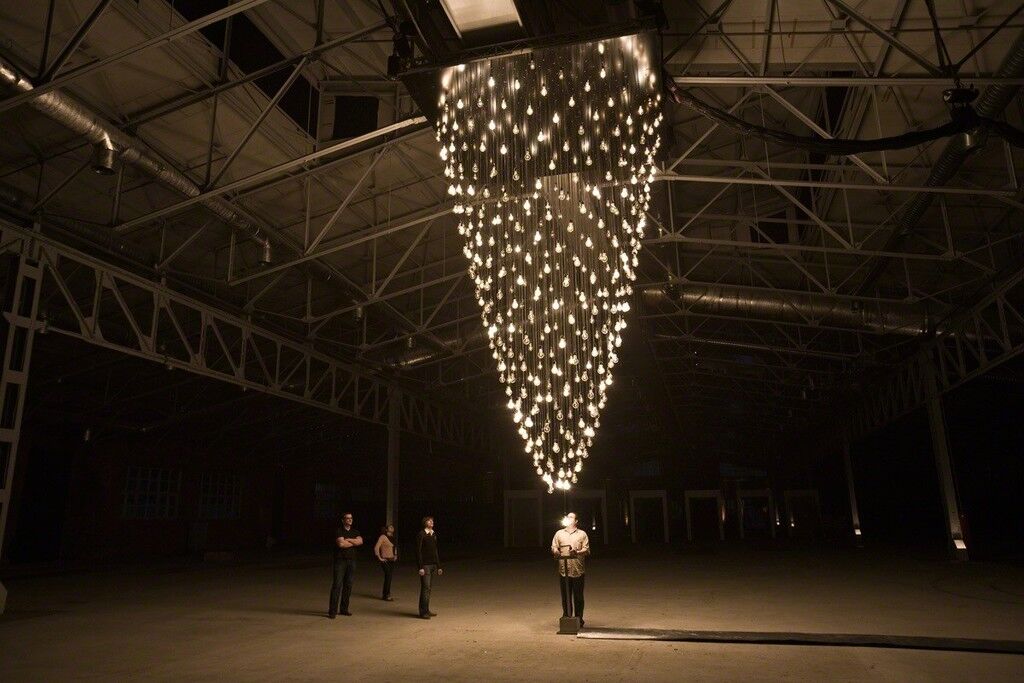 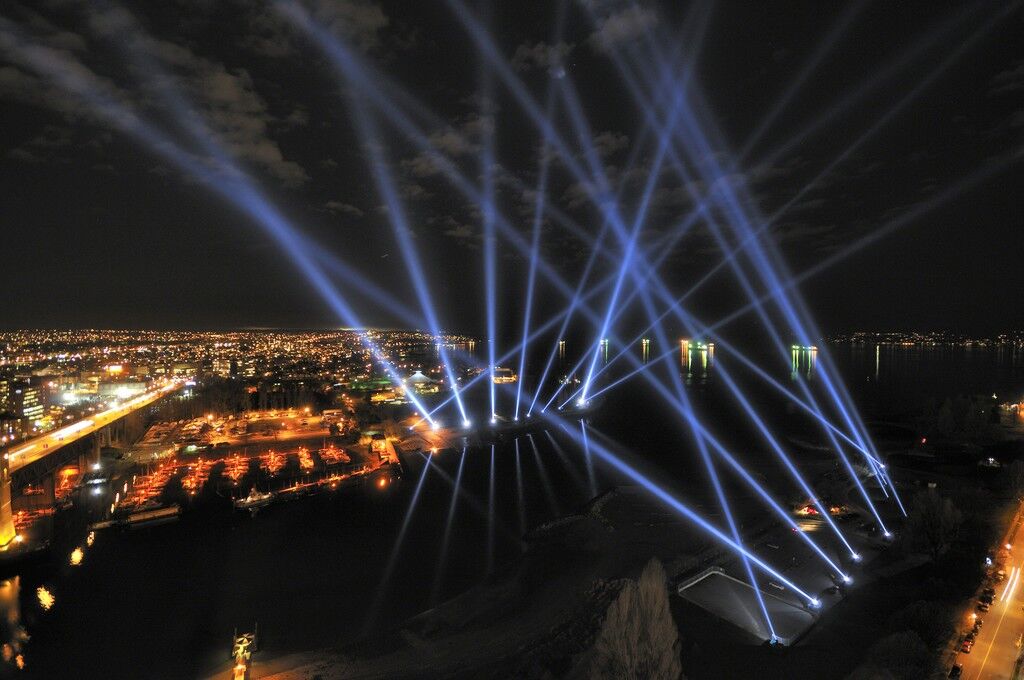 Rafael Lozano-Hemmer
Vectorial Elevation, 1999-2010
bitforms gallery
Advertisement
Technology and participation are both key elements of Lozano-Hemmer’s practice. One of his earlier works, Vectorial Elevation (1999), allowed anyone with an internet connection to control 18 searchlights that the artist had installed on buildings surrounding Mexico City’s main square. Over the following decade, iterations of the project took place in Spain, France, and Ireland, as well as in Vancouver during the 2010 Olympic Games.
More recently, Lozano-Hemmer began replacing the click of a mouse with participants’ heartbeats and voices. By giving the public the reigns, he imagines new creative potential for searchlights and urban space itself, inverting traditional connotations of surveillance and state control and instead rendering them more human. 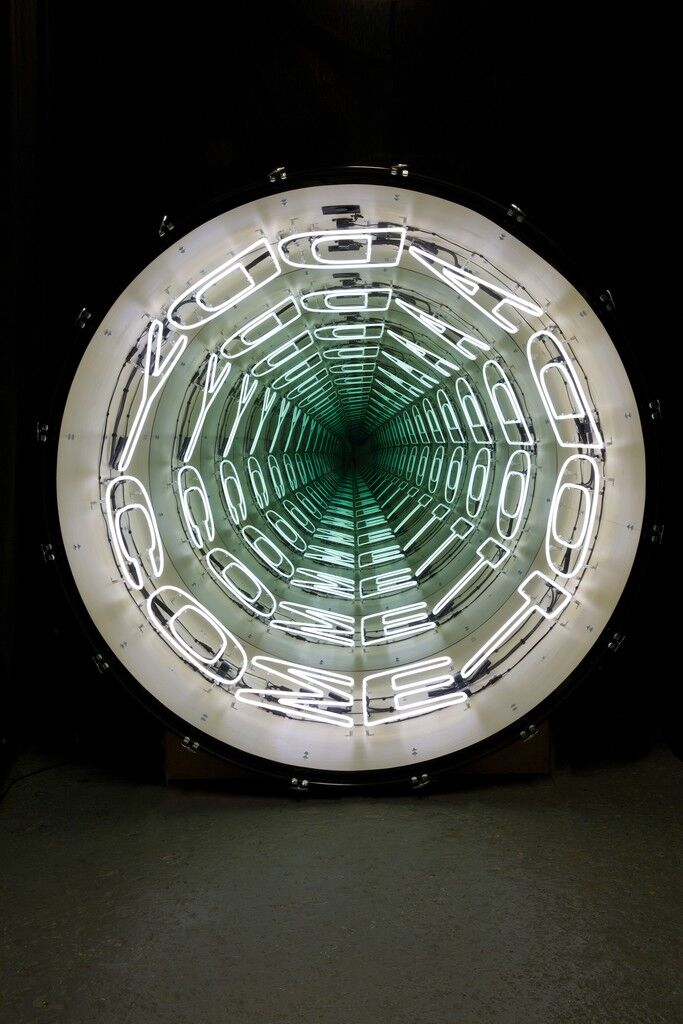 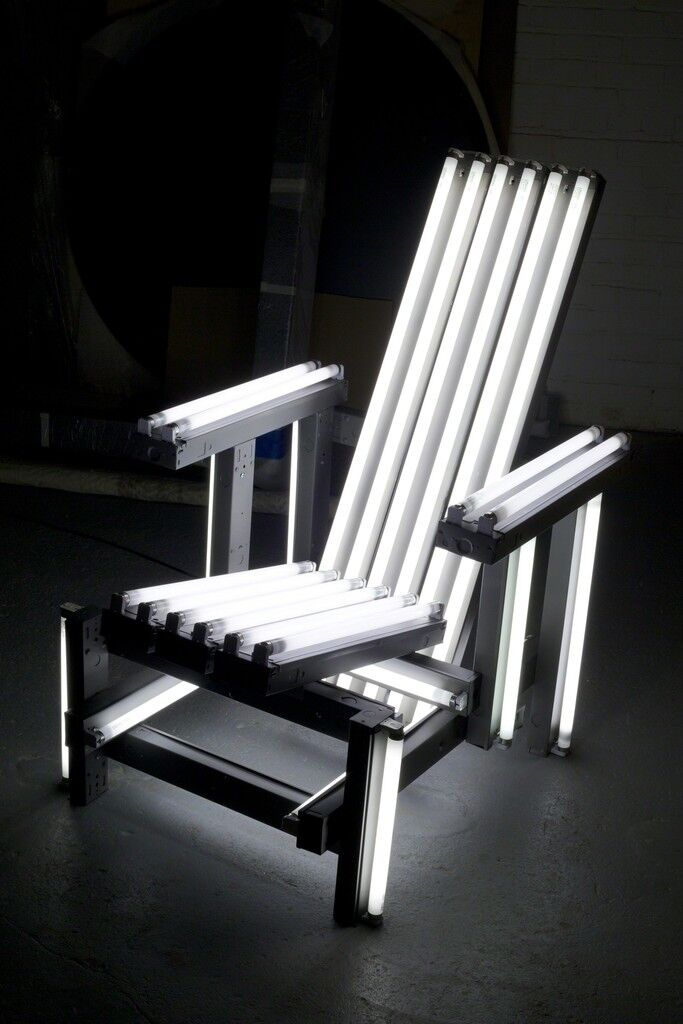 Iván Navarro
Metal Electric Chair, 2017
Paul Kasmin Gallery
Although Chilean artist Navarro has lived in New York since his twenties, he still feels the effects of having grown up under Pinochet’s dictatorship. His practice not only references this time in Chile’s history but is also, he has said, a coping mechanism to “deal with [his] own psychological anxiety.” Works made from lights and mirrors create the illusion of portals and tunnels, suggesting an escape from one’s physical surroundings.
In other pieces, chairs, doorways, and ladders take shape from fluorescent tubes of light, while his text-based works proclaim words ranging from “BOMB” to “BED” in block neon letters. His practice teeters between playful and menacing, critiquing society and power structures and referencing war, the electric chair, and imprisonment, in both the U.S. and Chile. 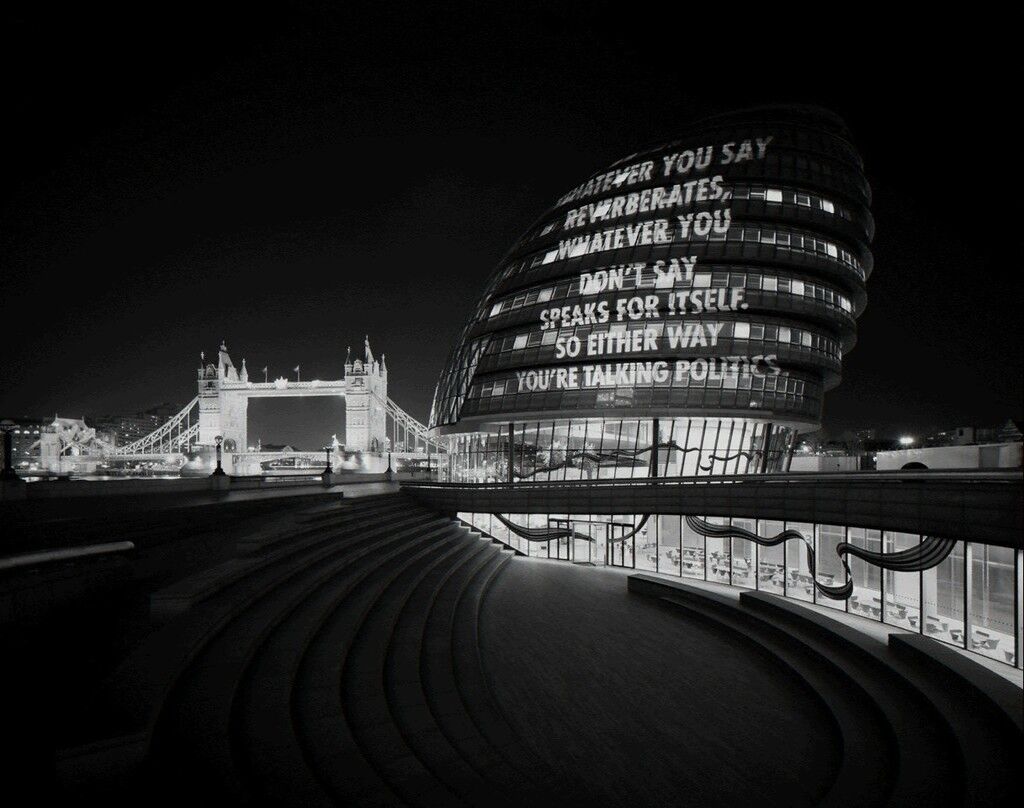 Jenny Holzer
TALKING POLITICS, 2008
Kukje Gallery
Text is primary to Holzer’s work. Whether carved in stone or displayed on LED panels—the medium for which she is perhaps best known—her unequivocal, cap-locked letters are drawn from found statements that sit somewhere between slogan-like platitudes and sincere convictions about society, love, and politics.
Her source materials range from novels to declassified documents on the U.S. wars in the Middle East. Consistently embracing new media, Holzer has worked with LEDs since they were newly invented, creating large-scale public installations. Less high-tech, though equally ambitious and public, is her ongoing series of light projections. Seared onto the nighttime facades of buildings around the world, Holzer’s texts become viscerally affecting images. 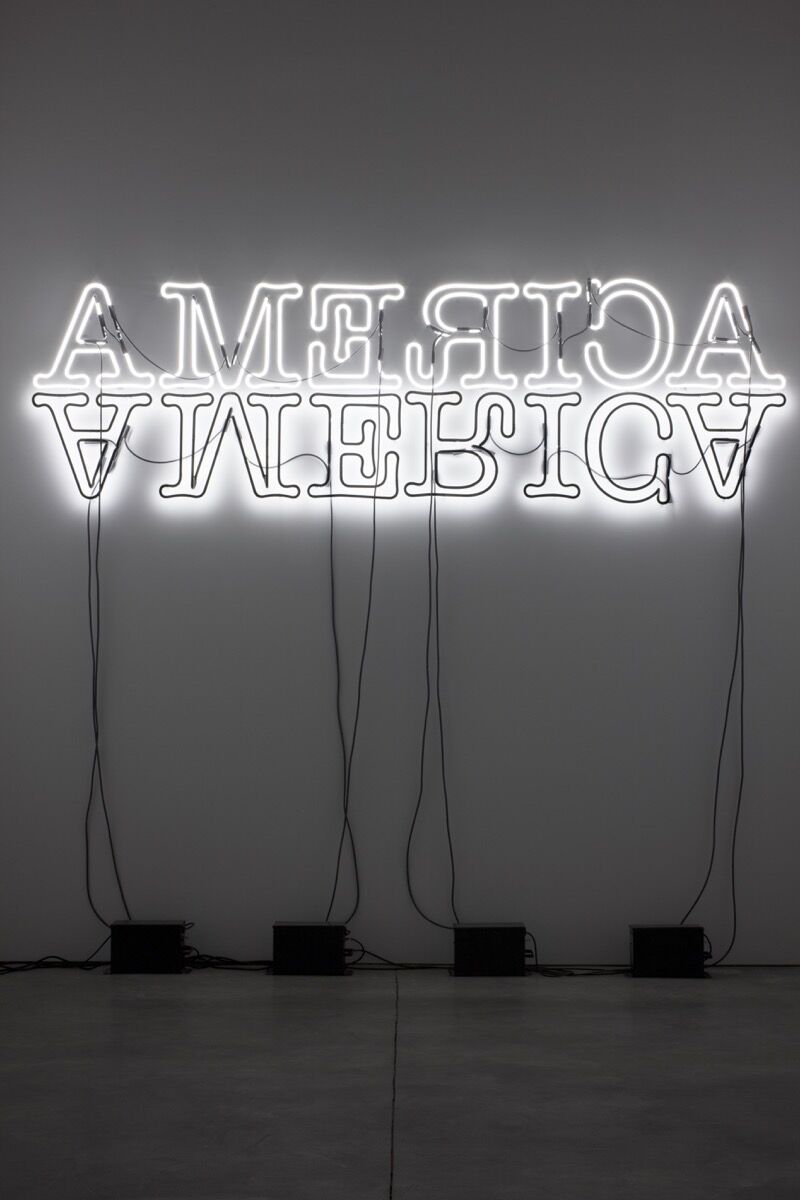 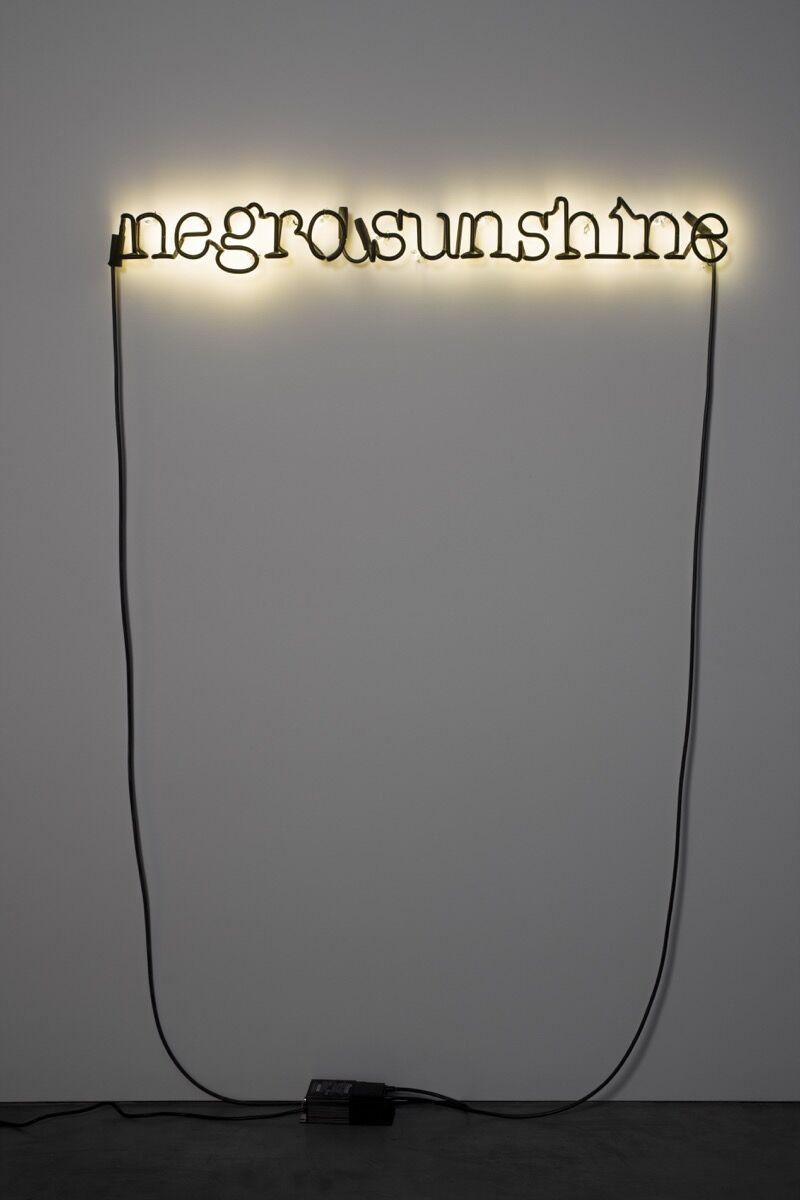 From retro coloring books to Gertrude Stein to
Robert Mapplethorpe
, cultural, literary, and art-historical sources inform Ligon’s work. The native New Yorker explores black and gay identities and the experience of “otherness” in society, through the visual language of ads and protest signs.
An interest in incorporating light into his practice sprang from seeing
David Hammons
’s work Concerto in Black and Blue (2002), in which visitors navigated a dark, empty gallery space with blue lights. Ligon’s resulting neon works feature bits of text—like “Negro Sunshine,” a quote from Gertrude Stein’s Melanctha (1909)—and are often partially painted black, creating a halo-like effect behind the letters and referencing ideas of race. 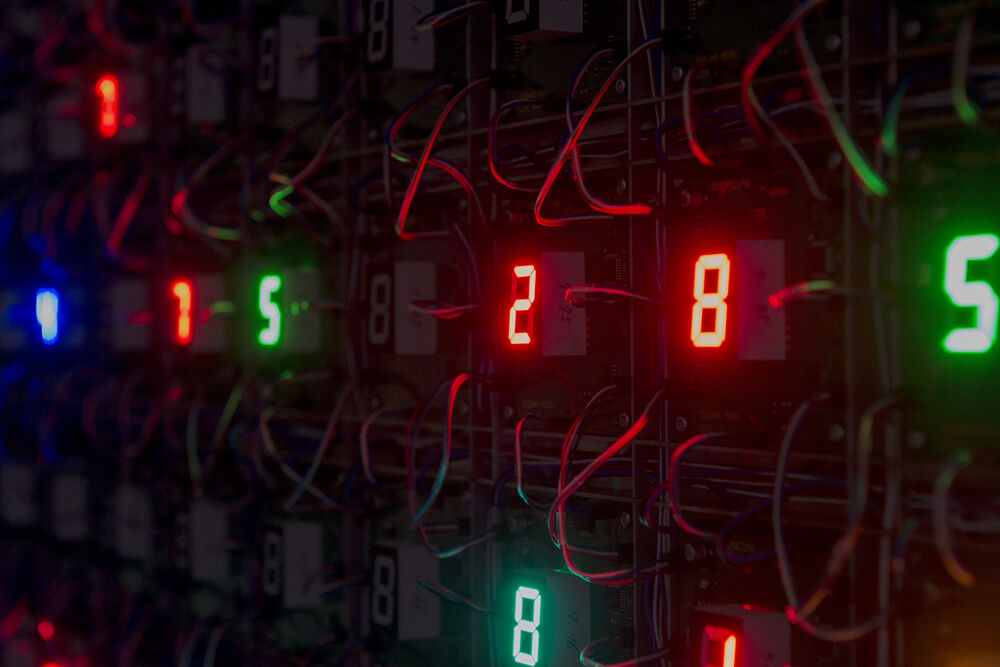 Tatsuo Miyajima
Life (rhizome) No.7,, 2012
SCAI The Bathhouse
It seems safe to say that most people would not immediately associate Eastern philosophy with LED lights, but that is exactly the pairing on which Miyajima’s practice hinges. In works that range from small, wall-mounted sculptures to immersive room-sized installations, the Japanese artist uses LED counters that he programs to repeatedly cycle through the digits one to nine.
More than just technological “gadgets,” as he calls them, the counters represent human existence itself, which for Miyajima is founded upon the Buddhist concepts of embracing continuous transformation, interconnectedness, and an endless cycle of birth, death, and rebirth. 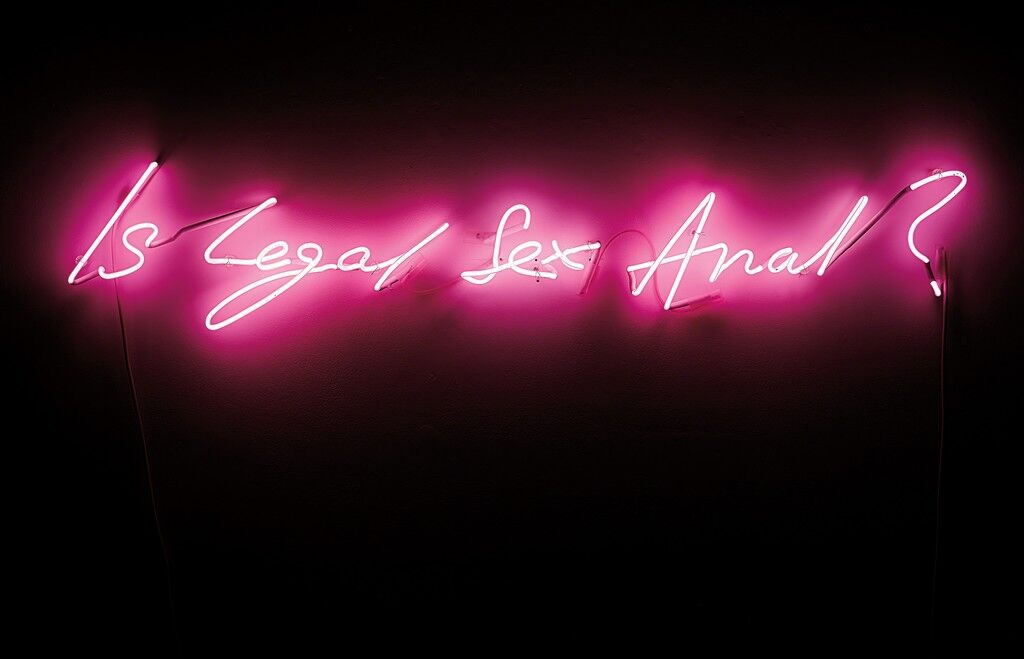 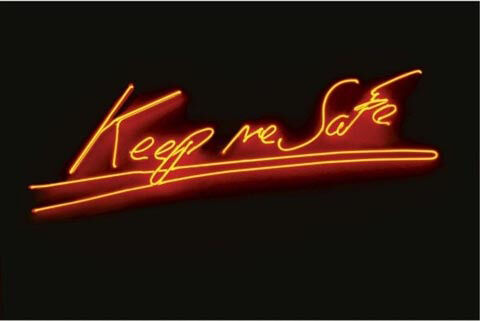 Tracey Emin
KEEP ME SAFE, 2006
New Art Projects
Queen of the
YBA
s, London-born Emin creates feminist-leaning works that range widely in medium, but which are steadfast in their subject matter: her own personal life. In installations, she has shown the world her unmade bed and publicized the names of all her past sexual partners, creating works that are as brazen as they are vulnerable.
Her neon works, which date to the early ’90s, operate in the same vein and are some of her most recognizable. They feature cursive script that is intended to look handwritten and feel personal and, in their content, juxtapose eroticism (“Is Legal Sex Anal?”) with tenderness (“Keep Me Safe,” “I Loved You More Than I Can Love”).
Rachel Lebowitz