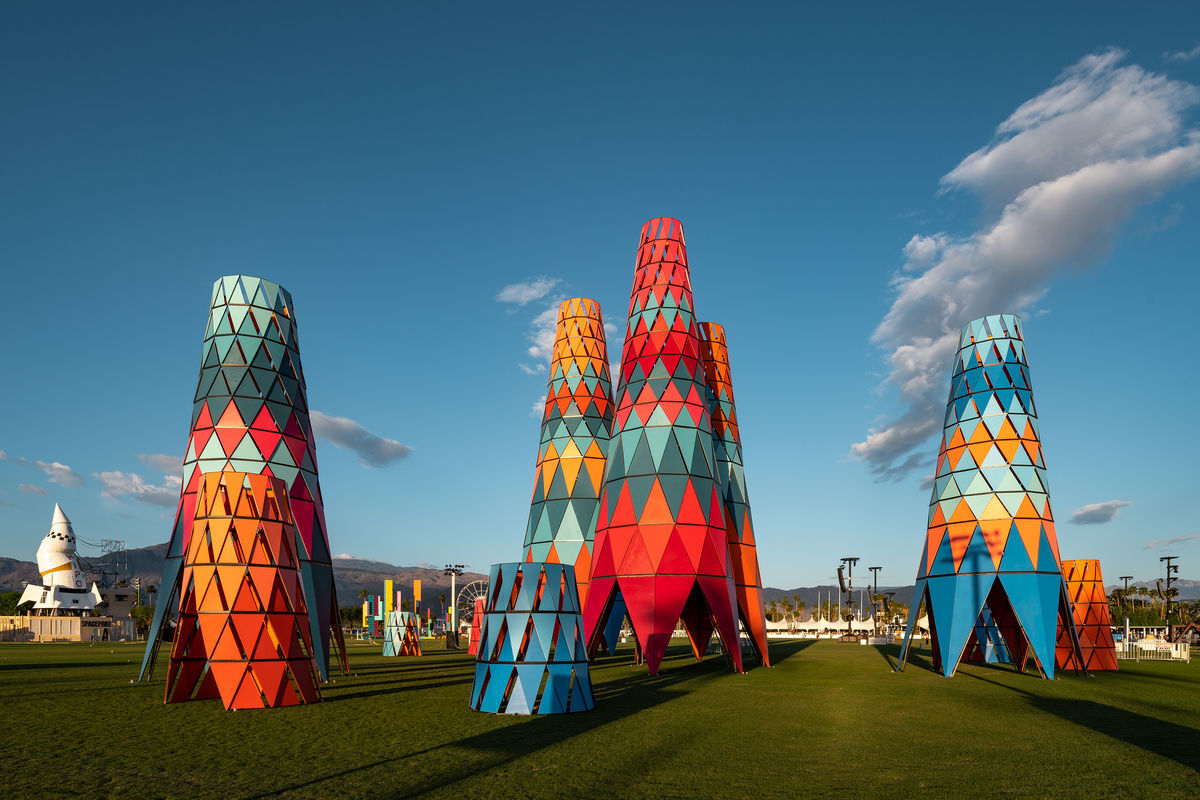 As Coachella Valley Music and Arts Festival kicks off its 2019 edition today, organizers have also unveiled the striking art program. And while the art may seem to fade into the commotion of the ultra-famous musical headliners—Childish Gambino and Ariana Grande among them—the installations that grace the Empire Polo Club grounds in Indio, California, each year are just as important, setting the aesthetics of the entire festival experience.
The art installations are in the background of nearly every photo, serve up fodder for selfies, and, at times, offer a respite from the crowds. And given the massive exposure that comes with exhibiting at the popular event (2018 saw over 100,000 fairgoers in attendance over two weekends), being featured in Coachella’s art program is a major boon for artists, designers, and architects.
This year’s art lineup includes both newcomers and returning favorites, and artists from both camps agree that showing at Coachella is a career-making moment. “There isn’t another venue in the world that is supporting large-scale art like this,” explained artist Derek Doublin, one half of the duo Dedo Vabo. “And in doing so, they also do something that is really unheard of: They give the artist 100 percent creative freedom.”
Not just supersized sculptures that can endure the physical duress of revelers, these artworks represent opportunities for artists to pursue ambitious projects with ample flexibility, budget, and space. Ahead of the 2019 festival, we caught up with seven artists to learn more about the works they’re showing this year. Artist
Sofia Enriquez
has carved an art and fashion career for herself in Coachella Valley, her hometown, painting murals and launching her own clothing line, Mucho. She created her first public mural for Coachella’s camping grounds in 2015 at age 22, after working for the festival and attending it since high school, but her new series of towering, three-dimensional murals shaped like paisley motifs, called MISMO, marks an important turning point for her career.
Broadly, her murals often draw on her own identity as a Mexican-American, featuring androgynous faces inspired by classical art that are meant to “sum up the idea of what a human being is,” Enriquez explained. In MISMO, the paisley shape is meant to serve as a symbol of equality—a motif that is worn by people from all walks of life. A central platform where festival-goers can convene will also feature models wearing her Mucho designs. She chose colors and subject matter that, like her clothes, reflect her own taste, but also “make people feel good.” Advertisement
The critically acclaimed Berlin-based architect
Francis Kéré
noted that he loves to explore the idea of gathering in his works, which often take shape as “canopies and spaces for knowledge exchange.” His career highlights range from designing a primary school in his local community of Gando, Burkina Faso, in 2001, to the prestigious Serpentine Pavilion commission in London in 2017, for which he made a great, circular overhang that sprouted up from the ground like a tree. At Coachella, he can similarly foster community through his work. “The festival creates a playfulness, through the use of color, gathering, music and dance,” he offered. “I love the enthusiasm and energy of the U.S.”
His piece, Sarbalé ke—which means “the house of celebration” in Mooré—is a series of 12 colorful steel and wood towers (some as tall as 60 feet) inspired by the African baobab tree. “I want festival-goers to have a space to celebrate, to look up when inside the piece, and feel inspired by the light radiating from the sky,” Kéré explained. “Baobabs have multiple uses as food and medicine. It’s the place where you get together, celebrate, and discuss.” After the festival, he plans to place the installation in the East Valley of Coachella, to live on as a public gathering space. The Kansas City– and Los Angeles–based artist
Peggy Noland
is known for cheeky work that uses clothing as its medium, with a distinct DIY, crafty aesthetic. Lately, she’s been a “texture queen,” using wild surfaces like fur, slime, and car wrap in her works.
Now in her third year working with Coachella, Noland used the 17,000-square-foot Sonora stage as her canvas; to work at such a scale, she enlisted her Los Angeles–based friends and peers to collaborate and execute the piece entirely by hand. The piece, Foiled Plan, is a sprawling, mixed-media installation that includes bespoke furniture and cacti sculptures, all covered in holographic foil; it plays into the artist’s interest in themes of reflection. “I hope the bands feel a visual synergy with us and I hope it creates a spot that the festival-goers can’t wait to hang out at,” she offered. Artist duo Vanessa Bonet and Derek Doublin, known as Dedo Vabo, create absurdist, magical-realist worlds through architecture, robotics, multimedia elements, and performers dressed as hippopotamuses.
“We kind of like to use the hippos as a way to hold up a distorted funhouse mirror to society and just human evolution in general,” Doublin explained. The works are almost like a shadow box you can peer inside, where the people in the audience are “observers or scientists that are witnessing these really bizarre things happening.”
Bonet and Doublin have been working on their third piece for Coachella, H.i.P.O.—a 75-foot-tall rocket and laboratory manned by hippos—for around 10 months. They consider the festival to be the most exciting venue for art, given how ambitious they can be and the massive audience they can reach. The piece is made up of six performance spaces, where the hippos, who are inexperienced in rocketry, attempt to launch the spaceship and engage in deep-space communications and experiments. Though their works often spark confusion or extreme reactions, they simply hope to make an impression. “Our stuff is strange enough and unique enough that people, regardless of how they feel about it, will remember it,” Bonet said. In his recent personal work, Patrick Shearn, creative director of Los Angeles production studio Poetic Kinetics, has been seeking to recreate the sensations of witnessing natural phenomena like swarms of starlings, schools of fish, and aurora borealis, inspired by his time as a wilderness guide in Alaska when he was young.
“In those moments, I’ve been struck by this sense that there’s something magical going on,” Shearn recalled. “I feel this sort of opening in my chest and this sense of exhilaration.”
Through Poetic Kinetics, he also seeks to create exhilarating experiences. The creative studio returns to Coachella for the seventh time with an updated version of a 57-foot-long astronaut it debuted in 2014. Now titled Overview Effect, the sculpture is inspired by the cognitive shift some astronauts experience upon entering outer space and seeing Earth for the first time.
“I’m particularly excited by the storytelling component; I am always looking for ways to make it bigger than just the festival,” Shearn explained of the work.The roving spaceman—now decked out with markers of his adventures through alien territories and festivals—is equipped with animatronic arms and video-projection capabilities, allowing festival-goers and people around the world to beam their faces onto its giant visor. (You can be featured by posting a close-up shot of your face on Instagram or Facebook, with the name you’d like to appear on the astronaut’s name tag, and #PKmission19.) Last year, the U.K.–based design studio NEWSUBSTANCE unveiled Spectra: a round, 75-foot-tall rainbow tower with an interior spiral ramp. The site-specific piece, a “resident” of the festival grounds, is featured again this year and will return in the years to come.
“We really wanted to try and captivate the audience with those California sunrises and sunsets, which is a kind of a main driver behind the spectrum of color,” noted Patrick O’Mahony. “As you go up the tower, with every step you take you’re washed in rich reds, yellows, and oranges.”
The studio typically works on site-specific projects like this one, and, coming from the U.K., were particularly struck by the Coachella Valley’s stunning skies; they wanted to offer a new vantage from which to see the festival, and a place to momentarily experience respite and a shift in perspective.
O’Mahony noted that while NEWSUBSTANCE has worked on festivals and ceremonies across the world, none match Coachella’s approach to art—that it gives “artists the same kind of platform that musical artists are given,” as well as the creative freedom. Showing at Coachella for the first time, architecture studio Office Kovacs presents Colossal Cacti, a piece made up of seven giant succulent sculptures (the tallest one reaches 50 feet into the sky) covered in road reflectors. The studio’s work typically includes conceptual proposals, architectural competitions, temporary installations, and commercial interiors, and Colossal Cacti is its largest installation yet.
The piece is loosely arranged in a spiraling ring to create a plaza for lounging. “Festival-goers can sit and relax, meet someone, or sort of dance on top of the plants,” explained Andrew Kovacs. Cacti were particularly attractive for their recognizability and broad appeal. “Hopefully people will positively engage with our installation, but also come away with a heightened awareness towards art and architecture,” he added.
Casey Lesser is Artsy’s Lead Editor, Contemporary Art and Creativity.
Related Stories

The 7 Most Awe-Inspiring Installations from Desert X

How the Massive Artworks at Music Festivals Are Created 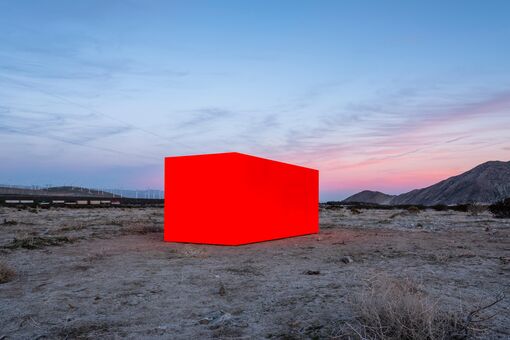 The 7 Most Awe-Inspiring Installations from Desert X
Kelsey Ables
Feb 13, 2019 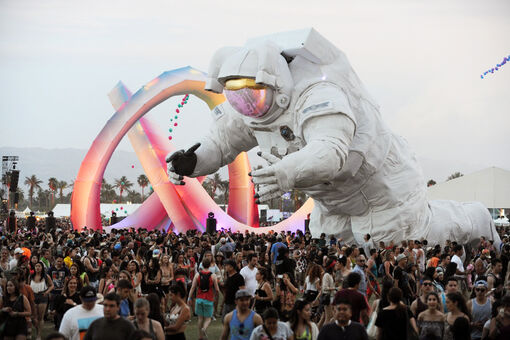 How the Massive Artworks at Music Festivals Are Created
Gabrielle Sierra
Oct 26, 2018