These 7 Artists Are Testing the Limits of Glass-Making

Ariela Gittlen
Aug 15, 2017 11:52am
“Until recently, the scientific community couldn’t agree if glass was a liquid or a solid, which is rather insane,” Cybele Maylone tells me. “It speaks to the magical properties that make glass so enchanting to artists.”
Maylone is the executive director of UrbanGlass, which, since its founding in 1977, has grown from the back room of a ceramics studio in SoHo into the largest public glass studio in the United States. (Other institutions such as the Corning Museum of Glass and the Swedish Glass Museum have also flourished.)
The organization’s expansion speaks to the steadily growing popularity of the material among craftspeople and contemporary artists alike. There’s much more to contemporary glass beyond
Dale Chihuly
’s famous chandeliers with their Medusa-like curls.
Lynda Benglis
,
Matthew Barney
, and
Robert Rauschenberg
all created artwork at UrbanGlass, and more recently, interdisciplinary artists including
Tauba Auerbach
and
Virginia Poundstone
have participated in the organization’s studio residency. 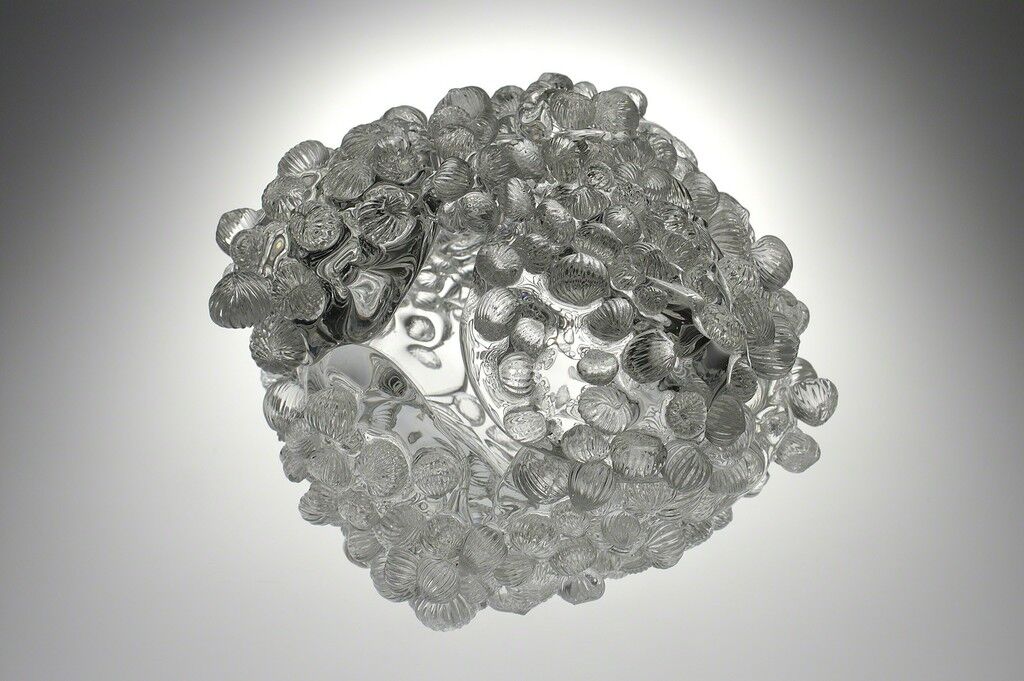 Ritsue Mishima
Polline, ca. 2003
Brutto Gusto
Since stained glass windows appeared in the first cathedrals, glass has always inspired awe. “I’ve never had an artist walk into our studio and not had their jaw hit the floor when they understand what’s possible here,” Maylone says.
Glass may be an unforgiving medium, but it’s extremely versatile. It can be blown, cut, cast, flameworked, filled with neon gas, and illuminated. Artists’ approaches have become increasingly multifaceted—combining glass with video, exploring 3D printing and other emerging technologies, or using it as an element in performance or social practice. Even the process of glass-making has its own dramatic and performative potential. “A move towards performance has always bubbled under the surface,” Maylone says.
What follows is the work of seven artists, each exploring the myriad possibilities of glass—from casts of miniature cities to a functioning glass seismograph to durational performance—and challenging the material’s limits. 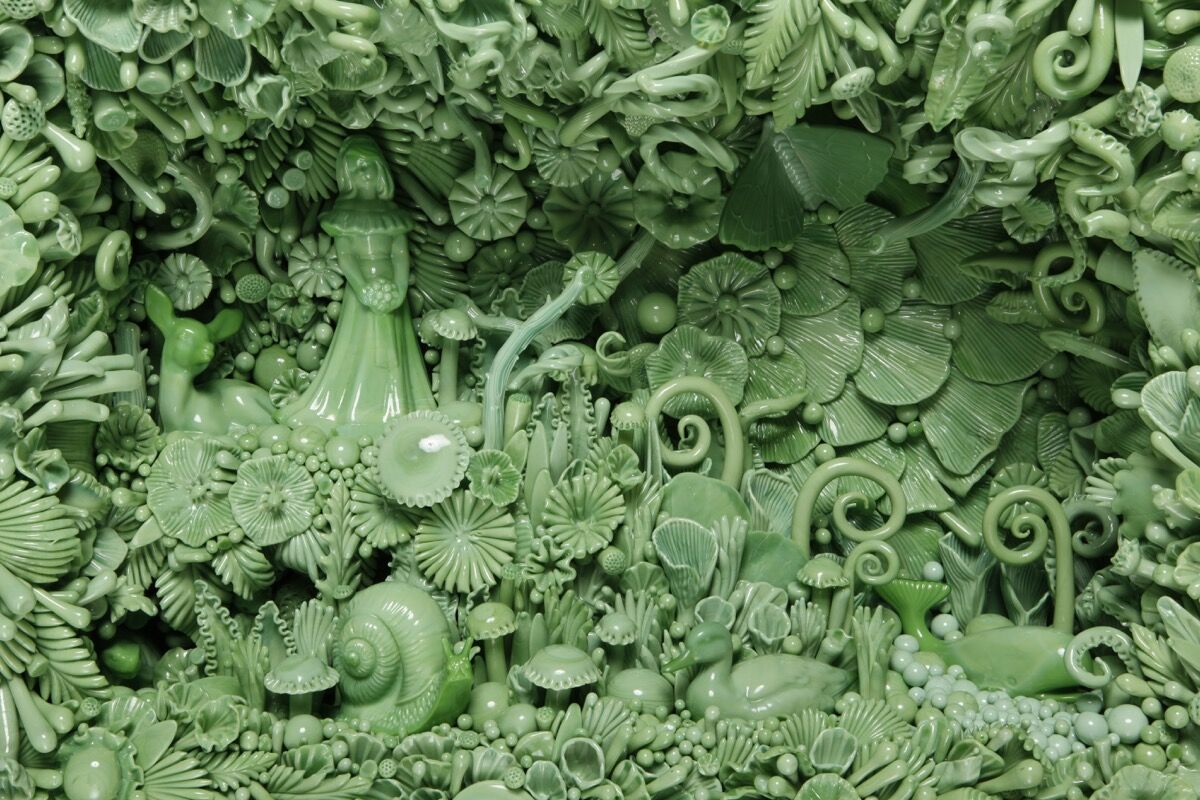 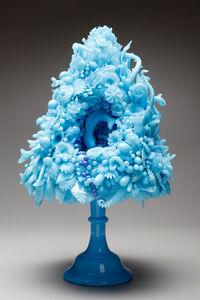 3 Images
View Slideshow
Using vintage scrap and deadstock from glass factories, Cowan shapes exuberant sculptures that sprout like coral from the table or wall. Her pieces are either completely uniform in color or have a gentle gradient, which softens their overwhelming detail. Recycling the material allows Cowan to engage with both the history of the pressed-glass industry and the personal histories of her audience.
“Many people recognize the colors or pieces in my work because their parents or grandparents collected pressed glass,” Cowan explains. “People from around the country send me old or broken glassware, which I use in my sculptures to tell the stories of objects often abandoned to the dustbin of American design.”
Community and collaboration also drive her practice. Like most glass artists, she doesn’t labor in isolation. “Because glass usually requires multiple people to be involved in the production of pieces, the community is really close and constantly inspiring,” she says. “It’s a big dysfunctional family.” Cowan’s solo exhibition “Re/Collection” is currently on view at the Fuller Craft Museum in Brockton, Massachusetts. 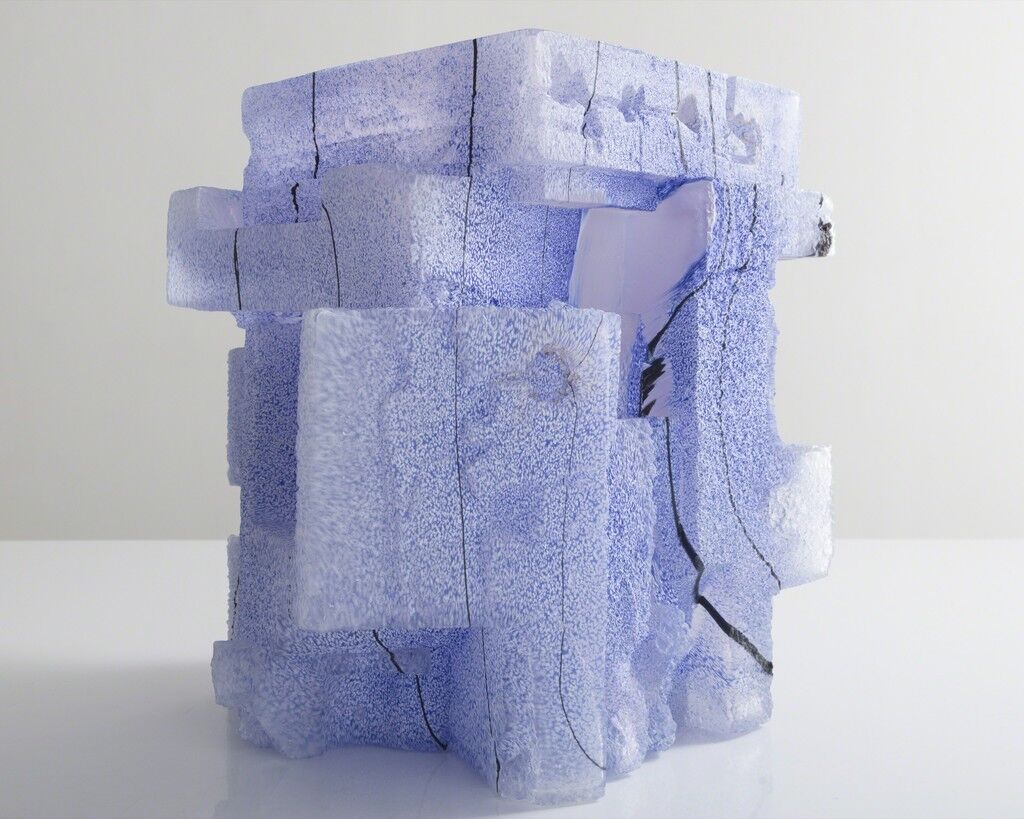 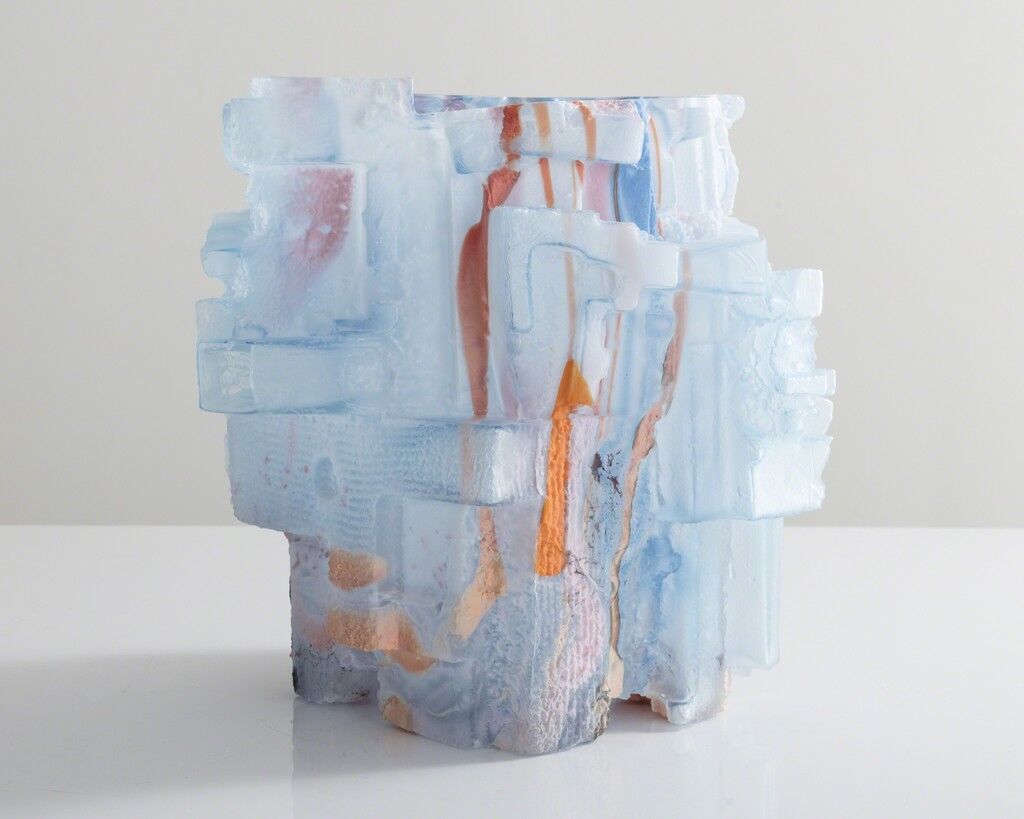 Thaddeus Wolfe
Unique Assemblage vessel in hand-blown, cut and polished glass. Designed and made by Thaddeus Wolfe, USA, 2017., 2017
R & Company
Wolfe is becoming well known, both in and outside of the design world, for his improvisational glass sculptures, vessels, and lamps, which seem to tessellate like crystal formations growing in underground caves. He uses plaster-silica molds to create his colorful forms, having found that shaping the glass freehand in a hot shop didn’t give him the control he desired. The molds are destroyed during the cold work (cutting and polishing) stage of the process, so that each object comes out unique.
Rather than working across a variety of materials, as so many artists now do, Wolfe has devoted himself to learning the craft of glass. “I am faithful to it,” he says, “because its material properties provide me with inspiration and challenges. It seems to have endless possibilities, while also having many limitations.” 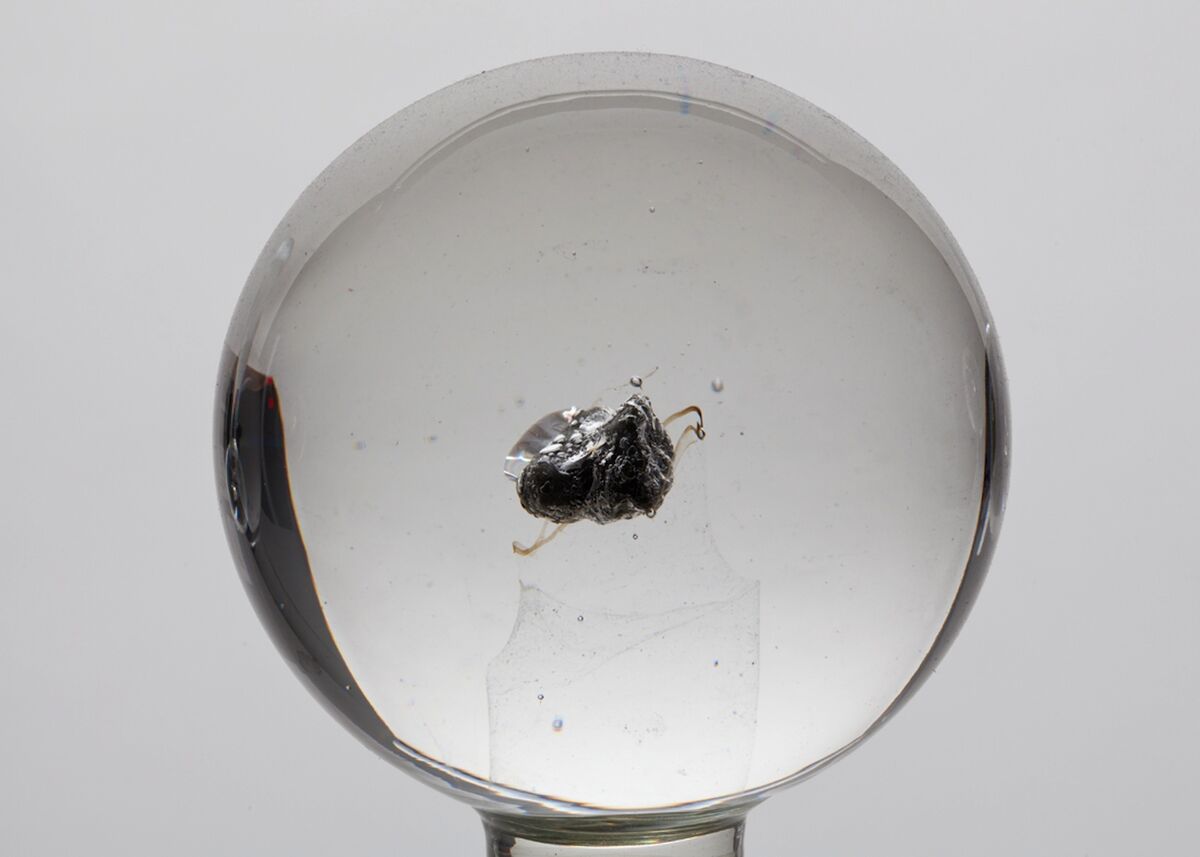 Wilson’s work recalls the adage, coined by science fiction writer Arthur C. Clarke, that any sufficiently advanced technology is indistinguishable from magic. His projects, which often integrate glass into performances, use the material to explore the connections between science and alchemy.
For his 2009 performance “Trinity Pilgrimage,” Wilson traveled to the Trinity Nuclear Test site in New Mexico dressed as Dr. J. Robert Oppenheimer (one of the nuclear physicists responsible for creating the atomic bomb). Wilson’s pilgrimage entailed searching for and collecting trinitite, a rare and radioactive form of glass that was the product of the 1945 nuclear weapons testing.
His resulting “Trinitite Reliquary” series (2010–present), which presents small nuggets of trinitite suspended in glass orbs, is a beautiful yet grim reminder of our nuclear history. Wilson sees glass as having the very real power to connect the past and future. “Glassworking as a tradition has remained relatively unchanged for centuries, if not millennia,” he says. “With sufficient care in its construction and cooling, human-made glass can exist in geologic time.” 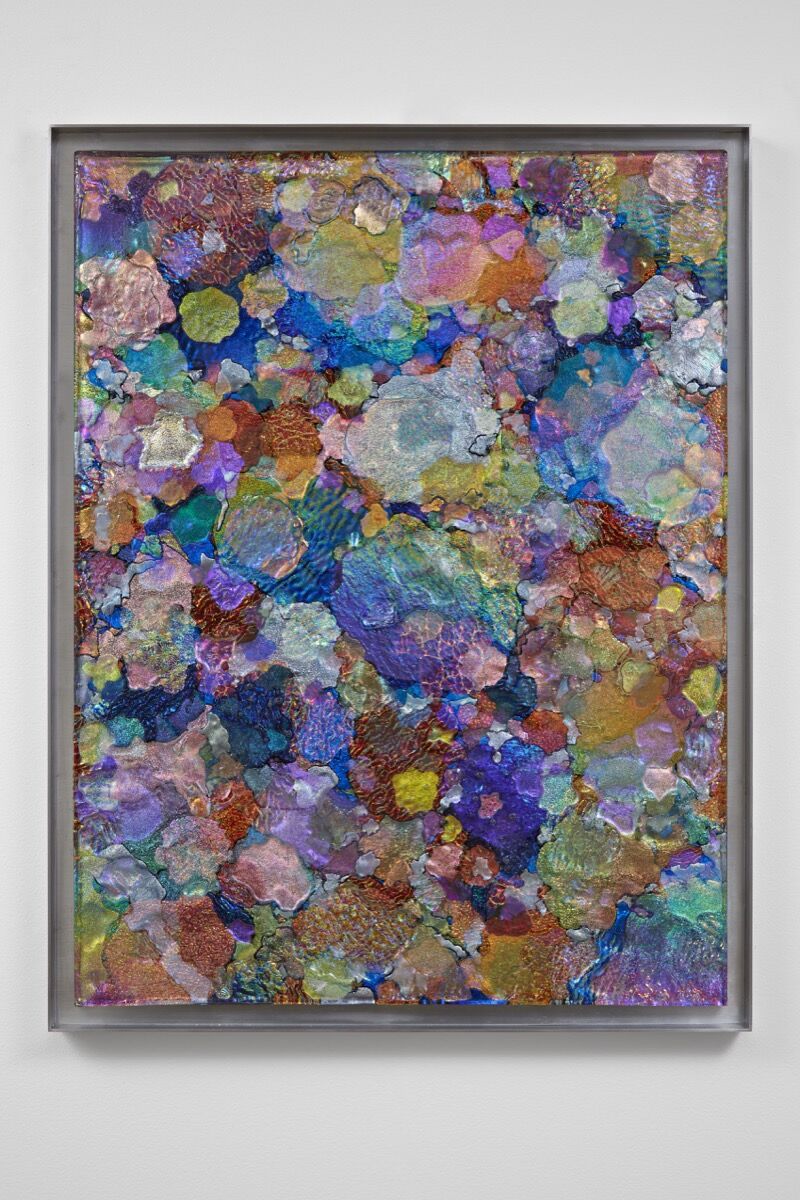 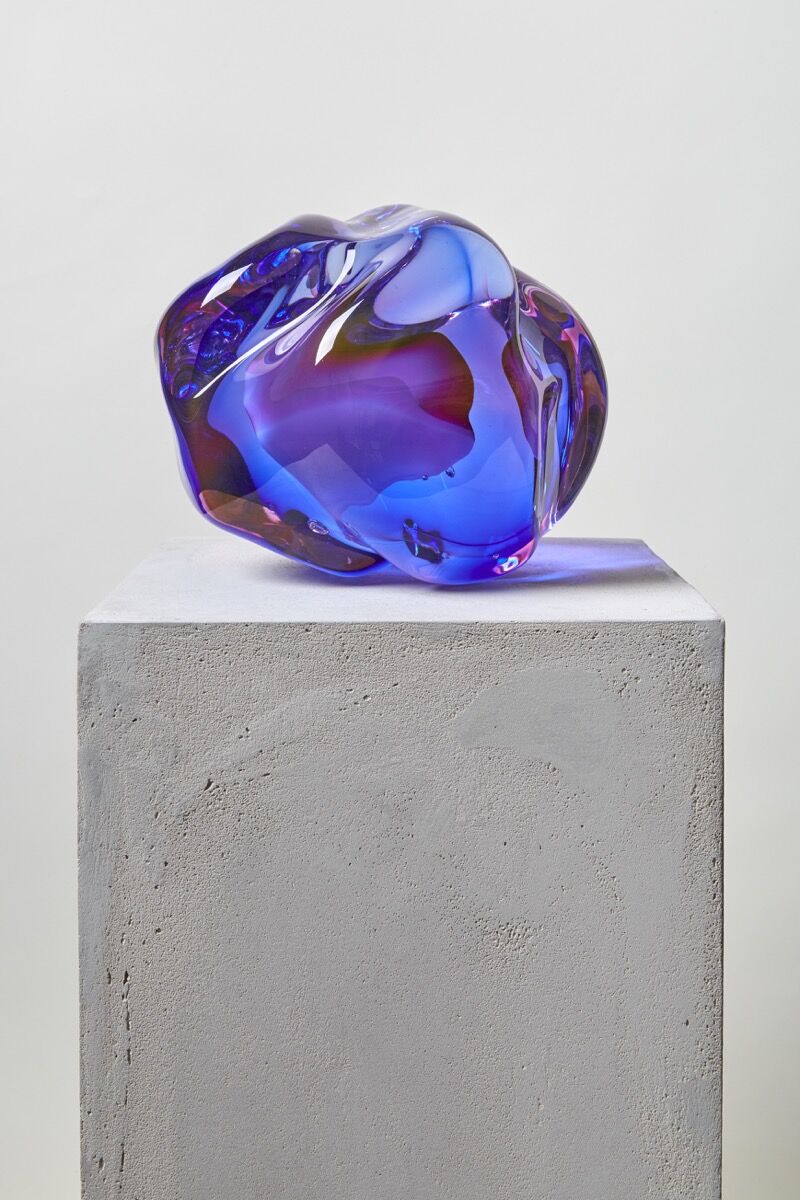 The visual pleasures of glass often arise from a paradox: How can an object appear so fluid, yet be so rigid? Like
Gian Lorenzo Bernini
’s marble flesh, it miraculously embodies its opposite. It is tender until touched. Audi’s glasswork seems especially liquid. Her “Fluid Rocks” is a series of blobs made from blown glass, pigment, and precious metals that look like they would wobble if poked. In her video work Landscapes of Mass Replication (2016), a collaboration with artist Samantha Lee, Audi’s blobs come alive, pulsing and undulating. Without a sense of scale, they could be as big as galaxies or as tiny as cells.
Beyond video, the French-Lebanese artist is also exploring 3D modeling and rapid prototyping. “What intrigues me is how to combine new technologies with ancient and traditional hand-making techniques,” Audi says. “The tools we have today are so powerful in shaping our reality, and I think about their potential to create new forms and attribute new behaviors to future landscapes. How can these tools inform new contemporary aesthetics?” 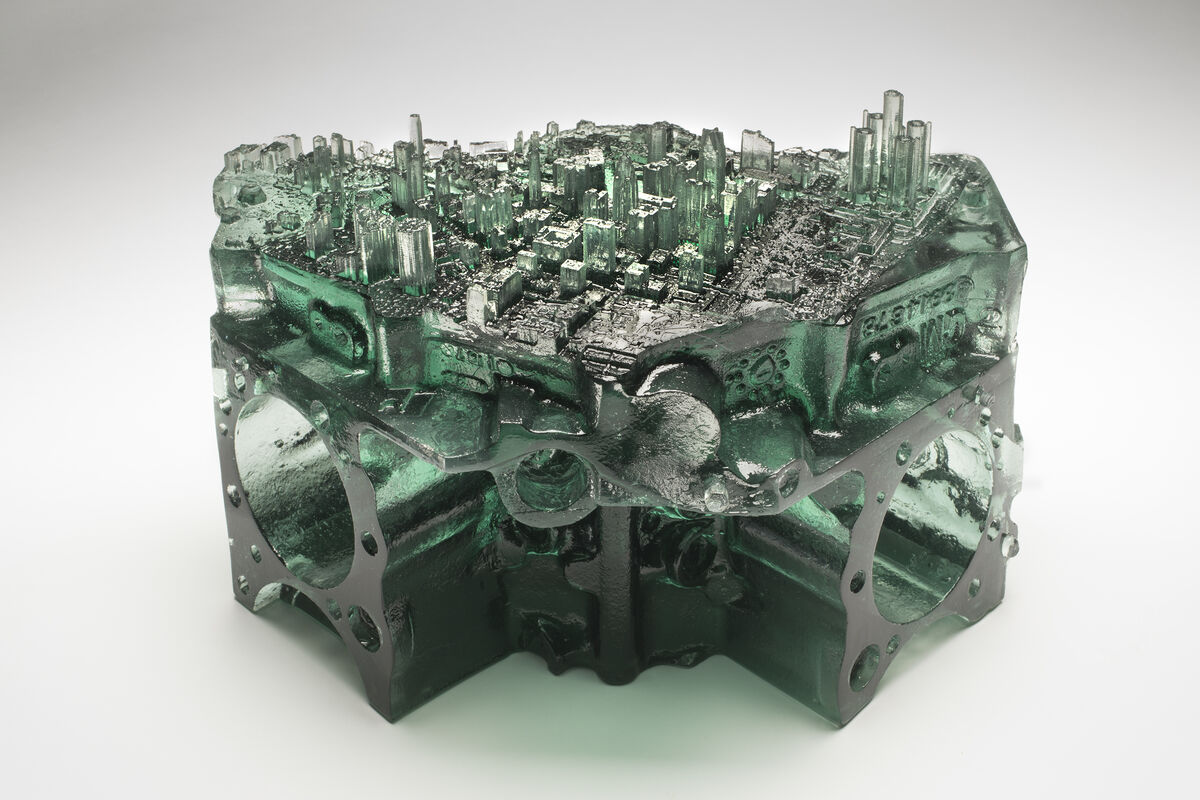 4 Images
View Slideshow
Viviano’s latest body of work, which explores the relationship between manufacturing and population change, is inspired by his Michigan roots. Growing up in Detroit in the ’70s and ’80s, he saw firsthand how the loss of auto manufacturing devastated the area. Viviano’s “Mining Industries” is a series of cast glass blocks topped with 3D-printed models of cities such as Detroit, Houston, and Seattle, produced using LiDARar data (the laser surveying technology used to create high-resolution maps).
Although driven by research and data sets, the work’s intricacy and wealth of detail is enticing rather than intimidating. And while the artist uses industrial materials like steel, ceramic, and glass, the cumulative effect is one of delicacy. “The fragility of glass serves as a metaphor for balance between time, efficiency, and the inability of manufacturing to meet future needs,” Viviano says. A solo show of Viviano’s new work is planned to go up at the Heller Gallery, New York, in May 2018.

B. 1975, based in Stockholm and Månsamåla, Sweden 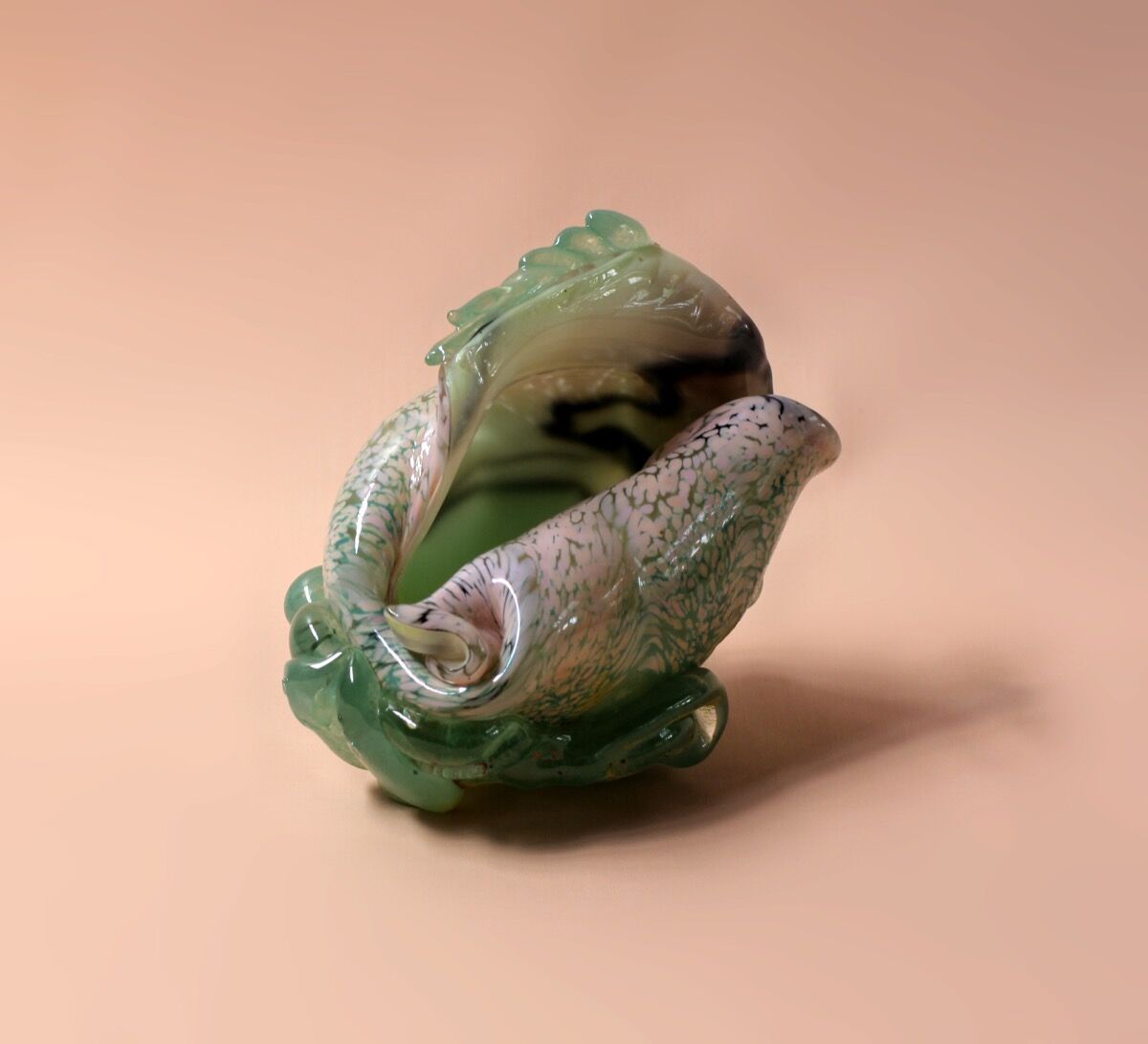 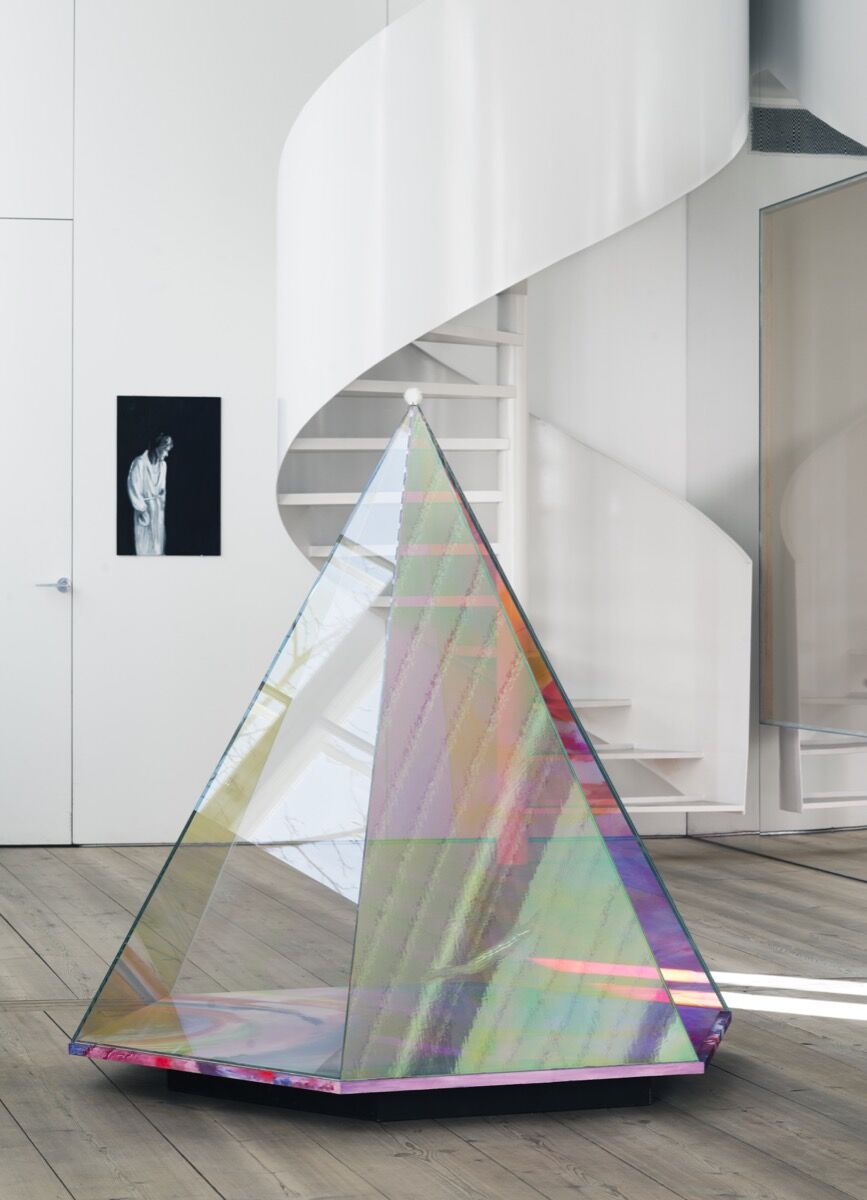 Jungnelius lists
Walter De Maria
,
Louise Bourgeois
,
Pierre Huyghe
, the
feminist movement
, and traditional Venetian glass techniques among her diverse influences. The Swedish artist’s work is similarly capacious, ranging from petite totems of femininity—tubes of lipstick, perfume bottles, and dildos with dainty bows all rendered in glass—to large-scale installations and public artworks.
One current project is the design for the ceiling of a new subway station in Stockholm, which mimics the crenulated surface and pink glow of a seashell, but on a monumental scale. “The gloss of the material seduces the observer,” says Jungnelius, who uses the visual appeal of glass to engage the viewer with a broader set of issues including feminism, economics, and ecological sustainability. Her work has been shown extensively in Sweden, and she currently lectures at the Konstfack College of Arts, Crafts, and Design in Stockholm, where she received her MFA. 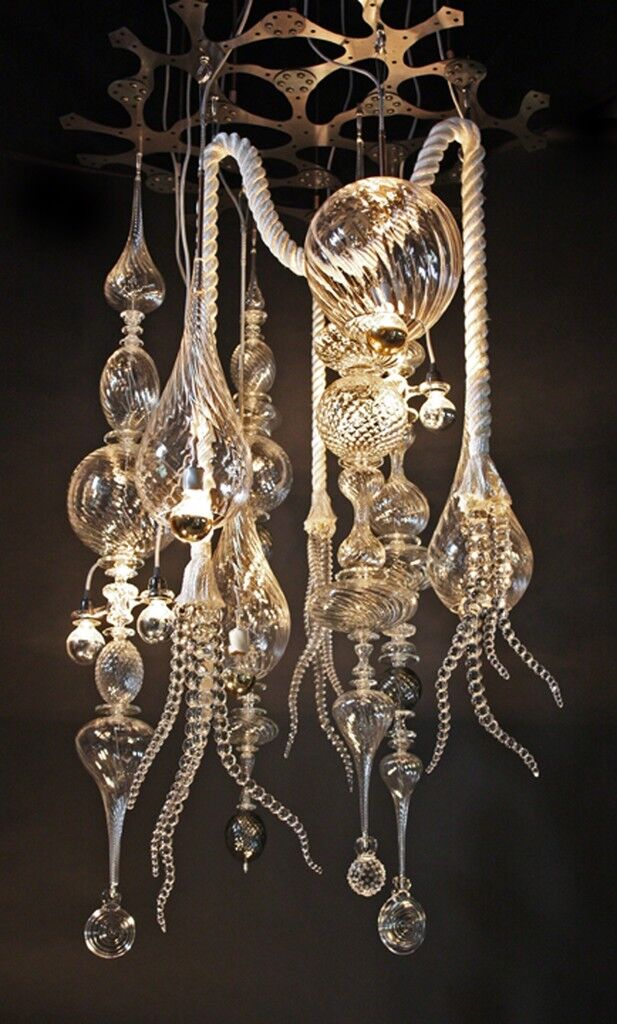 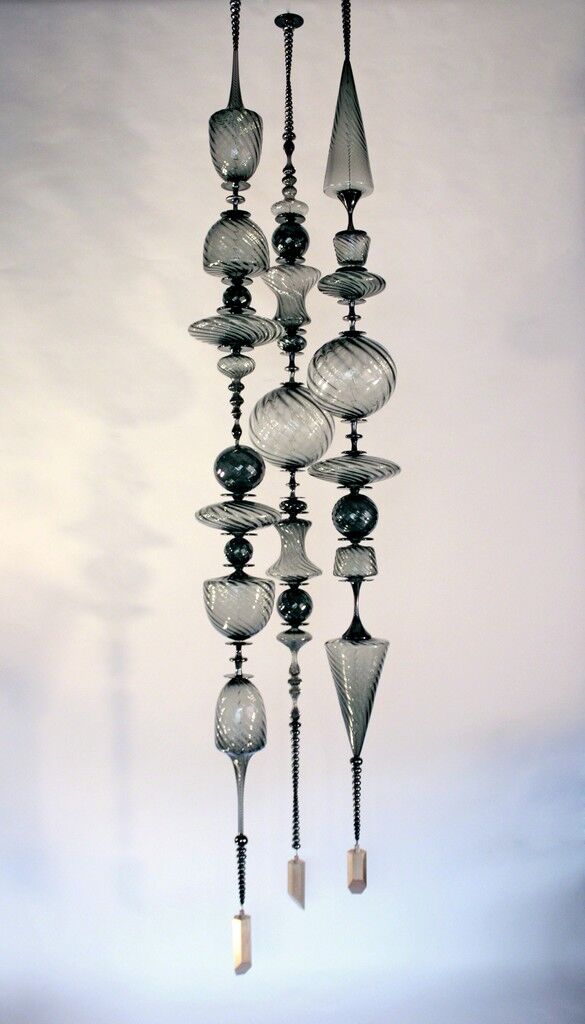 Andy Paiko
Smolder Pendant, 2016
Wexler Gallery
There’s something undeniably steampunk about Paiko’s work, which is flamboyant yet functional. His objects suggest a world in which glass plays a more utilitarian, even technological role. Among these are his Indefinite Sum #6 (2015), a collection of lacquered objects resembling laboratory equipment from a more elegant civilization, including bell jars topped with glass shells and coral.
Paiko also uses glass to create unlikely kinetic sculptures—a glass spinning wheel transforms wool into yarn, a glass metronome keeps time, and a glass seismograph faithfully measures the earth’s vibrations. Although his chief concern is function, the artist doesn’t shy away from ornament. His work is often shamelessly beautiful (earning it considerable popularity among collectors). In 2016, Paiko was a recipient of the Louis Comfort Tiffany Foundation Biennial Award, which recognizes emerging artists and craftspeople.
Ariela Gittlen
Related Stories 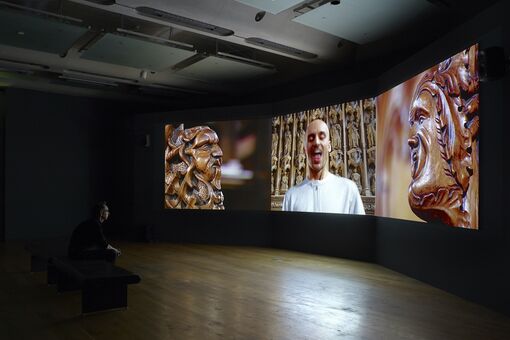