The 7 Most Awe-Inspiring Installations from Desert X

Kelsey Ables
Feb 13, 2019 5:54pm
Desert X, a sprawling outdoor art exhibition in California’s Coachella Valley, returned in its second iteration this week. Its 19 featured artists and collectives are unapologetically taking on timely topics, from indigenous rights to nuclear testing. The widely acclaimed show, made up of site-specific installations by leading contemporary artists, received over 200,000 visitors in its 2017 debut and became a social-media sensation.
This year, stretching over 50 miles, Desert X (which is open to the public through April) places its focus on California’s shrinking Salton Sea, thus bringing environmental issues to the forefront in a region speckled with indelible traces of climate change. And given the show’s proximity to the hotly debated U.S.–Mexico border, commentary on the treacherous landscape, the hope of refugees, and the nature of borders has also become central. Here, we share seven of Desert X 2019’s most compelling works (all dated 2019). 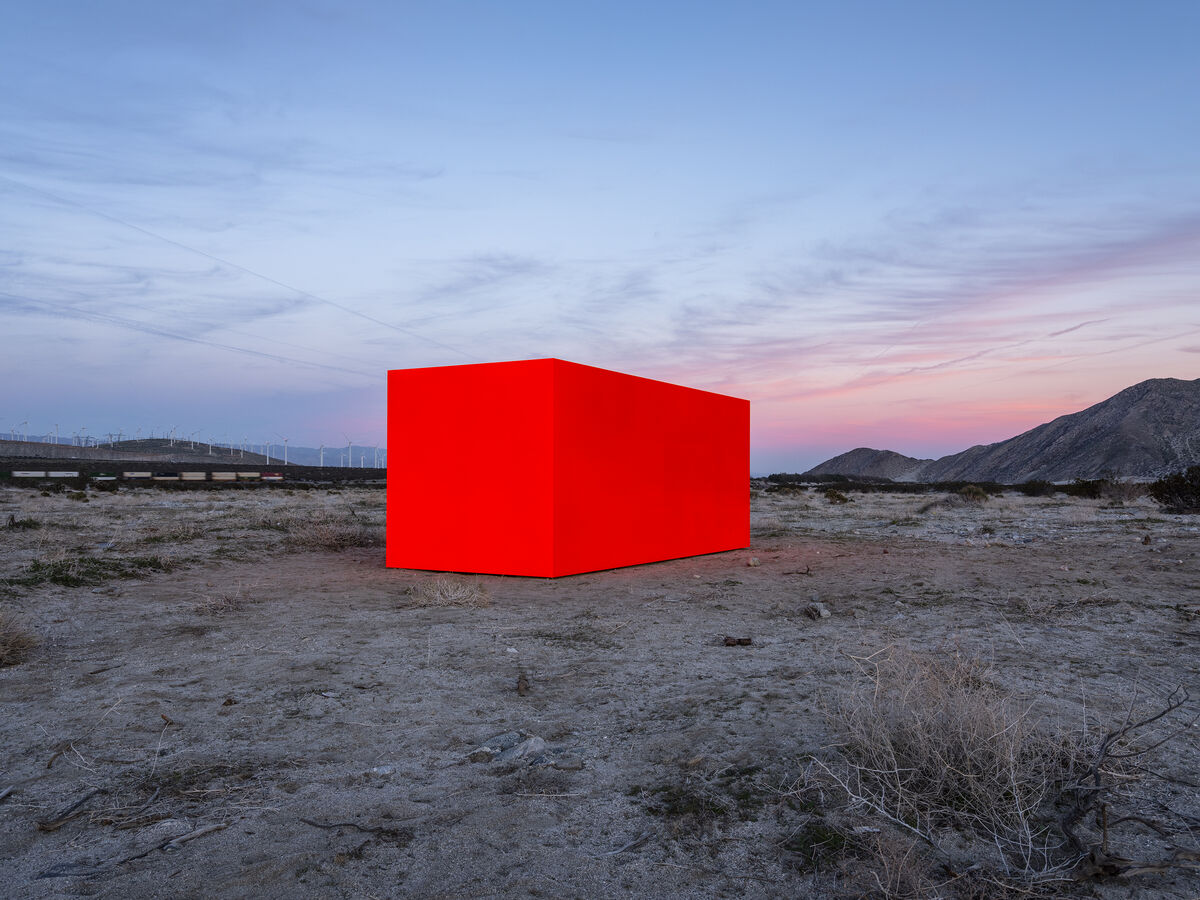 Bright, sleek, and geometric,
Sterling Ruby
’s SPECTER stands in stark contrast to the rugged terrain surrounding it. Creating a void in the landscape and looming like an apparition, the retangular mass at once obscures and reveals. Minimal in form and maximal in color, the work speaks to the Los Angeles–based artist’s broader practice; he seems to have navigated every extreme of the aesthetic spectrum—from polished to vandalized, austere to ornate, planned to erratic. 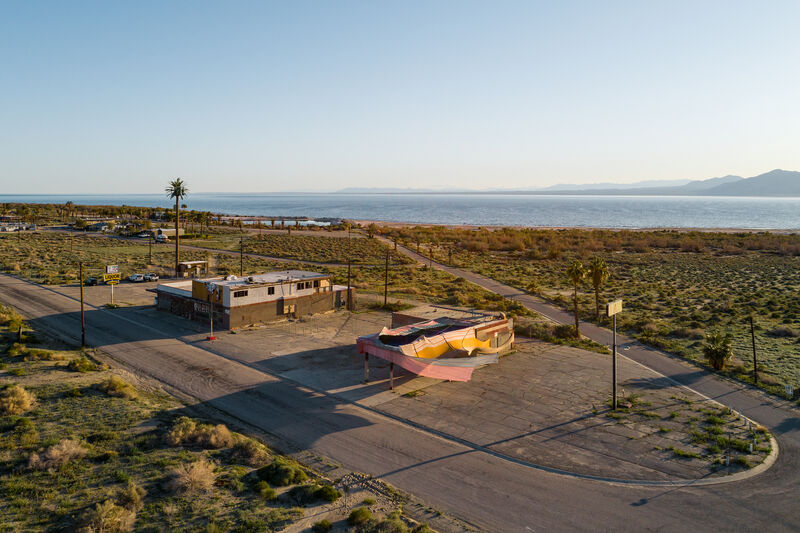 Advertisement
Known for his expressive use of fabrics and materials, New York–based artist
Eric N. Mack
breathes life into an abandoned gas station near the Salton Sea with colorful silks and tulles. Interested in transforming spaces and engaging viewers viscerally, Mack draws influences from fashion and sculpture, and uses materials as language. The billowing fabrics in Halter reframe the angular exterior of the gas station and render the rigid space fluid. In ever-changing ebb and flow, Mack’s materials evoke a sense of borders in flux, and the parameters of the gas station’s physical space—like the desert—become difficult to define. 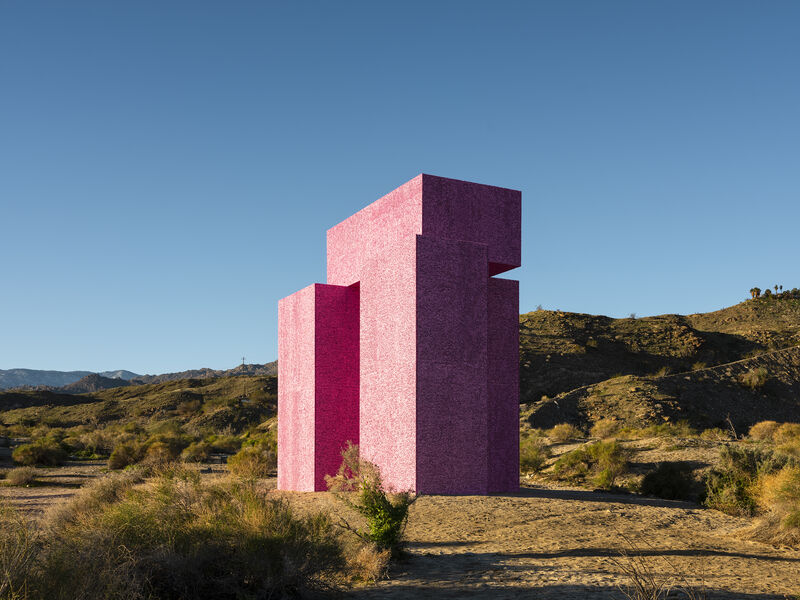 With their coral reef–inspired piece Dive-In, Danish art collective
SUPERFLEX
alludes to the ways Earth’s past and future will meet in its transformation from climate change. Just as Coachella Valley was once an ocean, many regions of the world face the threat of submersion. SUPERFLEX responds by creating spaces that are both human and marine-friendly. The pink, porous structure not only references the deterioration of coral reefs, but also nods to another casualty of progress: the obsolete outdoor movie theater. 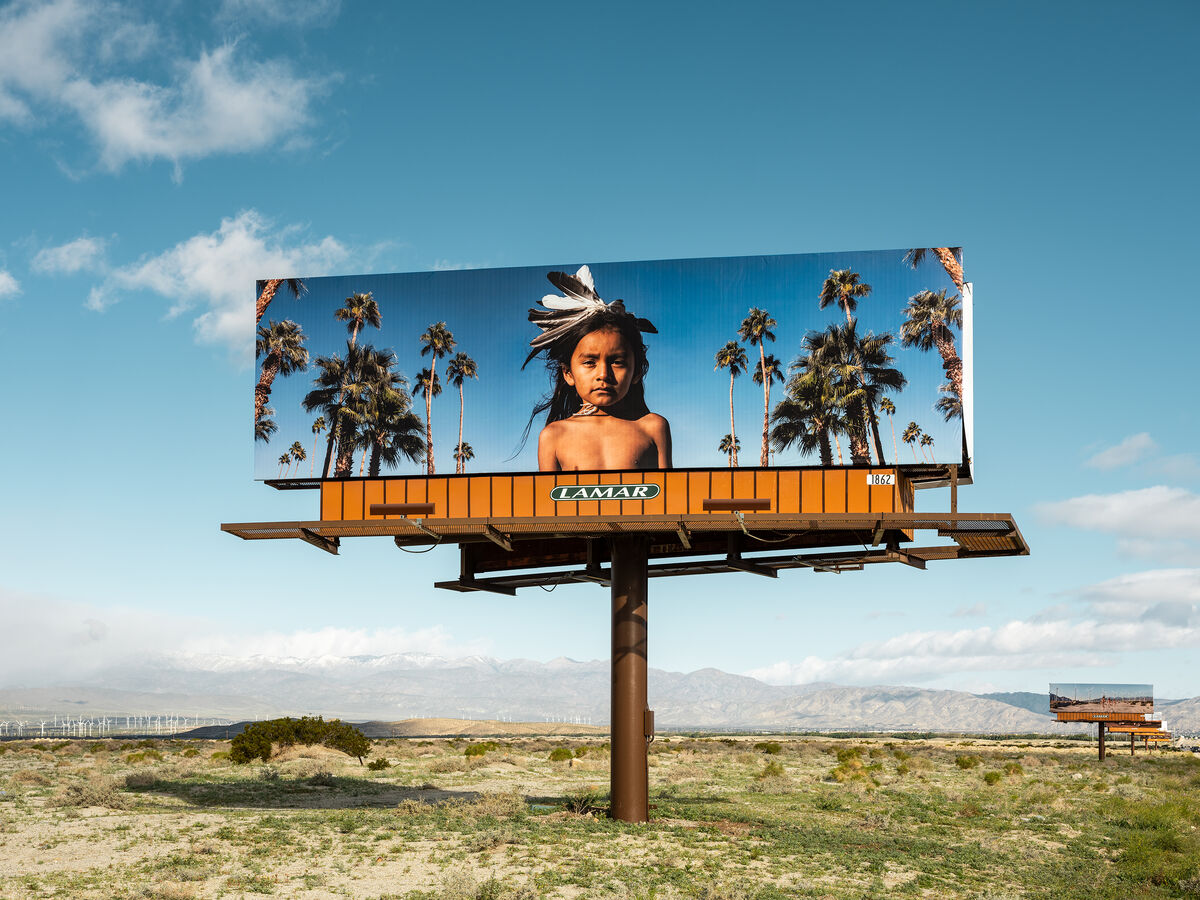 Cara Romero
reminds drivers on Interstate 10 of the long history of the land with billboards featuring photographs of precocious young Native Americans of the Chemehuevi tribe as they visit the lands of sister tribes in the Coachella Valley. A Chemehuevi tribe member herself, Romero uses the template of commercial advertising and contrasts the innocence of childhood with pressing current issues, like the southern border wall. By calling attention to forgotten tribes, she also engages with larger narratives like the erasure of indigenous people in the trajectory of American history. 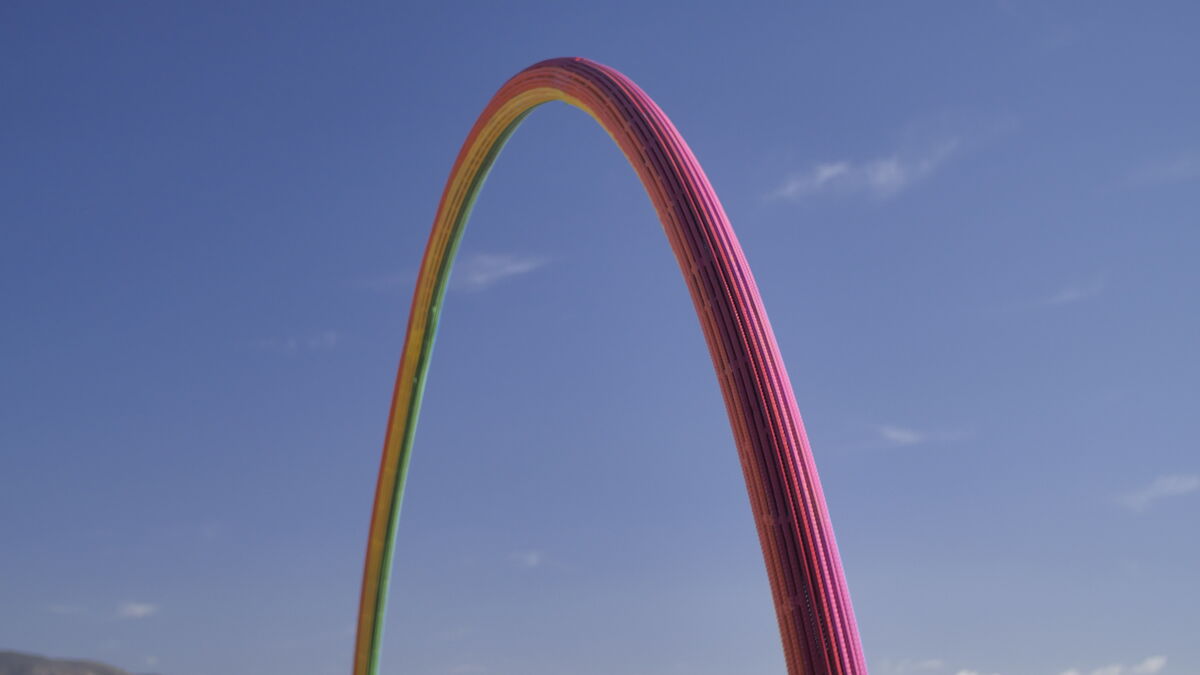 Comprised of two identical rainbows in Baja, Mexico, and Coachella Valley, California,
Pia Camil
’s Lover’s Rainbow represents the hopes both realized and crushed amidst the harsh terrain and contentious political realities at the U.S.–Mexico Border. Made from rebar and inspired by abandoned homes Camil has seen around Mexico City, the rainbows evoke themes of construction and desertion. Engaged in a transnational conversation about connectivity and inclusivity, Camil’s sculptures aim to “re-insert” hope into the land. 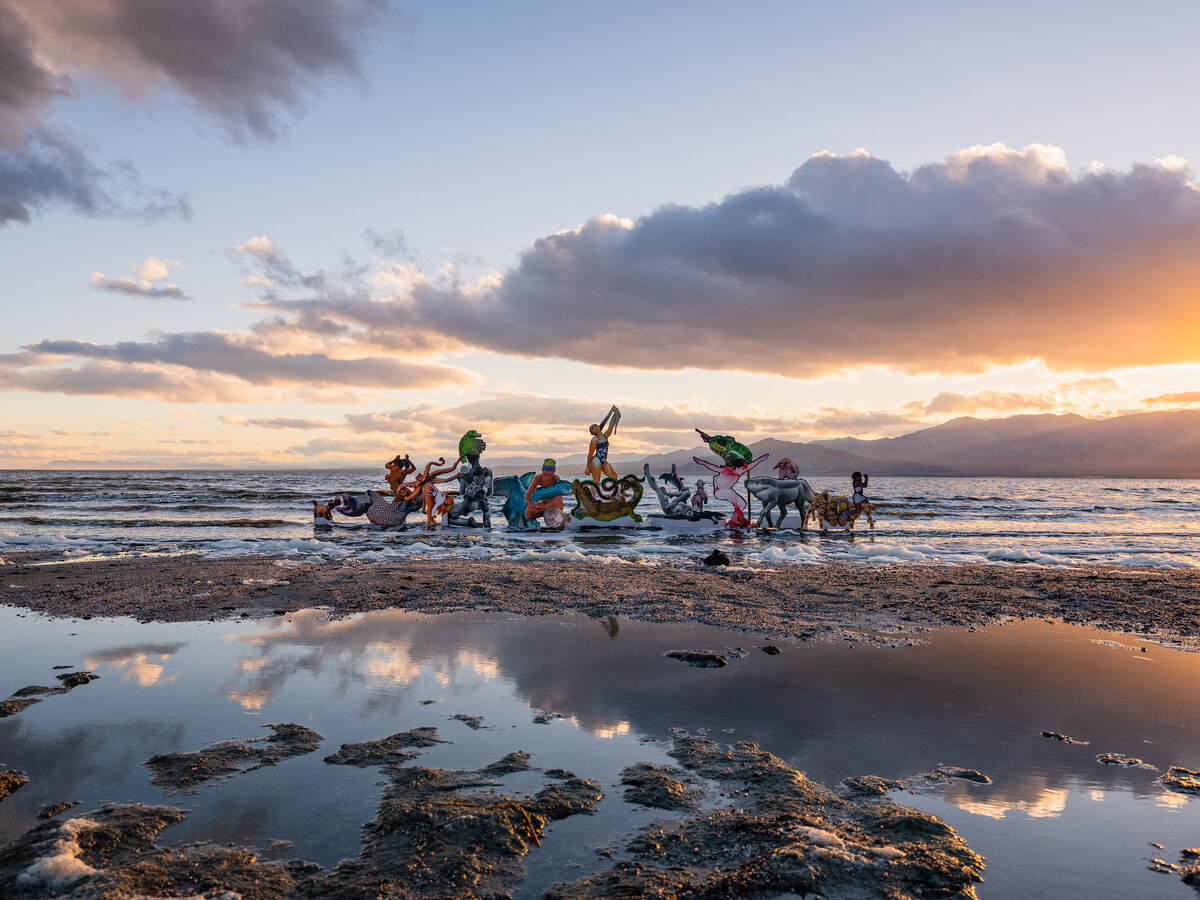 A performance artist with a penchant for relating dance forms to the natural world,
Cecilia Bengolea
brings both performance and sculpture to Desert X in Mosquito Net. Collapsing distinctions between ancient and modern, divine and secular, Mosquito Net draws on Bengolea’s interest in animism and human-animal relations. The sculptural component, a collage-like mass of dramatically posed human figures interspersed with real and imagined animals, is just offshore in the northern part of the Salton Sea. 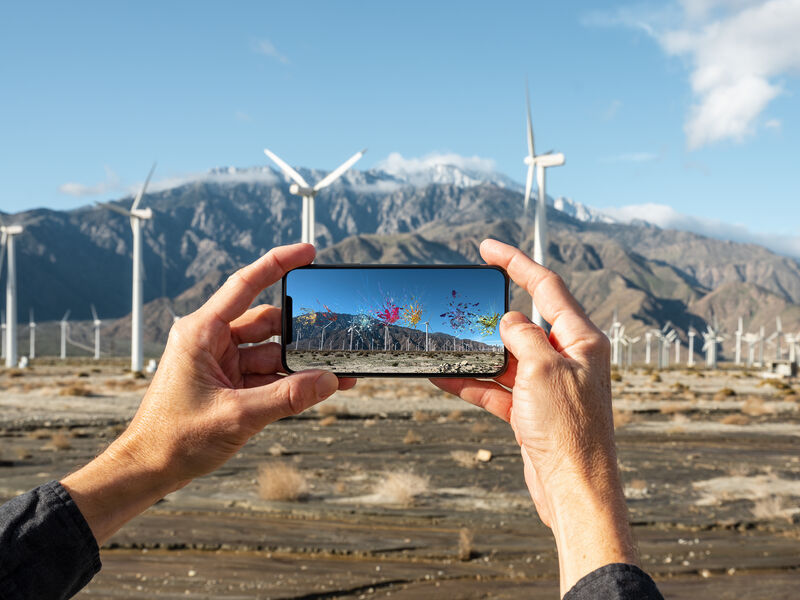 Nancy Baker Cahill
’s contribution to Desert X can only be seen through a smartphone screen. Download the 4th Wall app and you can see her augmented-reality works Revolutions and Margin of Error,whichcomment on energy use and the ensuing man-made environmental crisis, in a state that—with fires in the north and a shrinking sea in the south—is at the height of environmental catastrophe and the center of climate change discussions. Baker Cahill uses a variety of media in her work, including virtual reality. She is interested in the body’s relation to space—evinced here by the perceived colossal scale of the piece.
Kelsey Ables
Related Stories