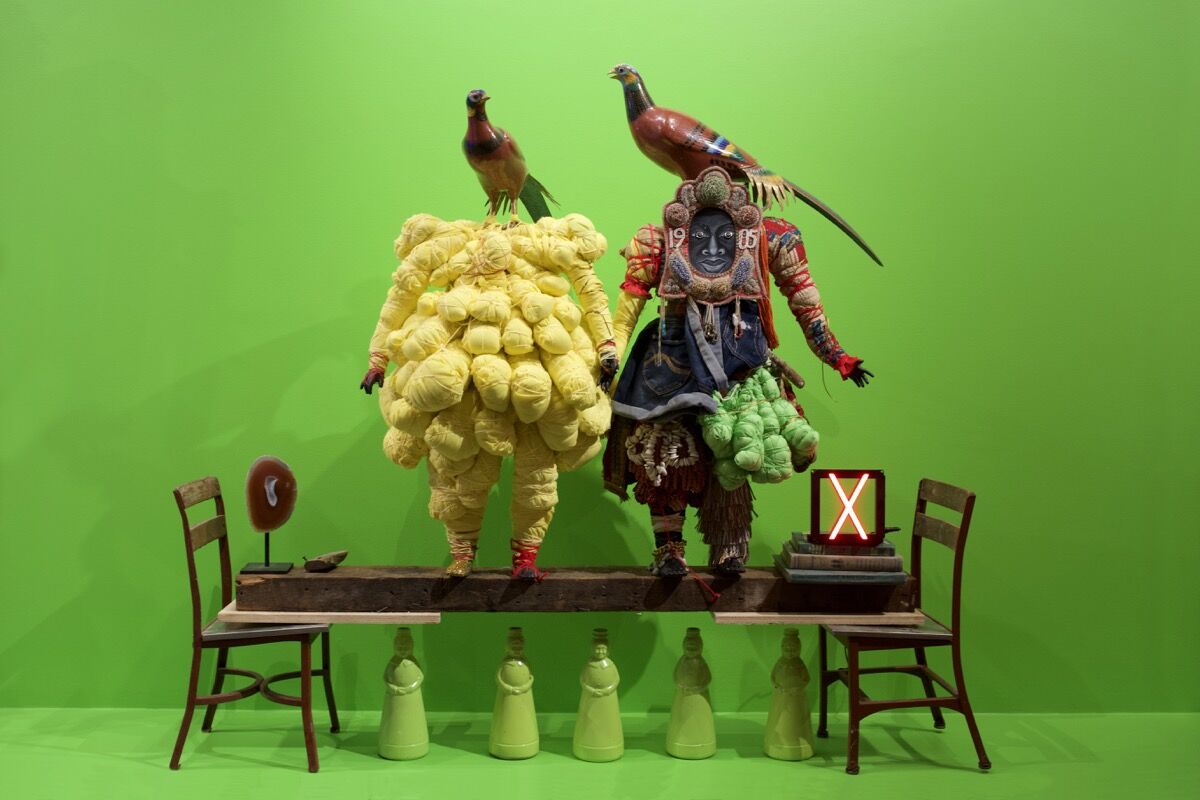 Vanessa German
’s latest show, “TRAMPOLINE: Resilience & Black Body & Soul,” opens with what appears to be an homage to tennis stars and all-around heroes Venus and Serena Williams. Employing recent magazine covers that featured the athletes, German built their faces and bodies into a series of shimmering assemblages of gems, lace, mirrored bits, tufts of overflowing hair, faux-butterflies, and other found treasures. The works not only celebrate the legendary women, but what they represent—individuals at the very top of their field who have demonstrated incredible resilience and perseverance, despite the extreme adversity they faced as African American women. 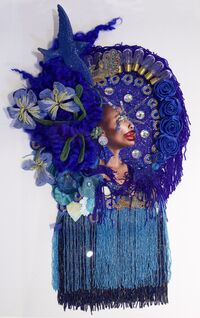 Vanessa German
View Slideshow
4 Images
Advertisement
Resilience is at the heart of much of the artist’s practice, which addresses the everyday injustices that people of color encounter. The show’s upper floors are punctuated by a series of figurative and altar-like sculptures that foreground the black body, while invoking the harsh realities of history and the present. Ultimately, German creates a space for reflection and what she calls “human technology”—the human capacity to offer one another love, joy, and protection.
—Casey Lesser 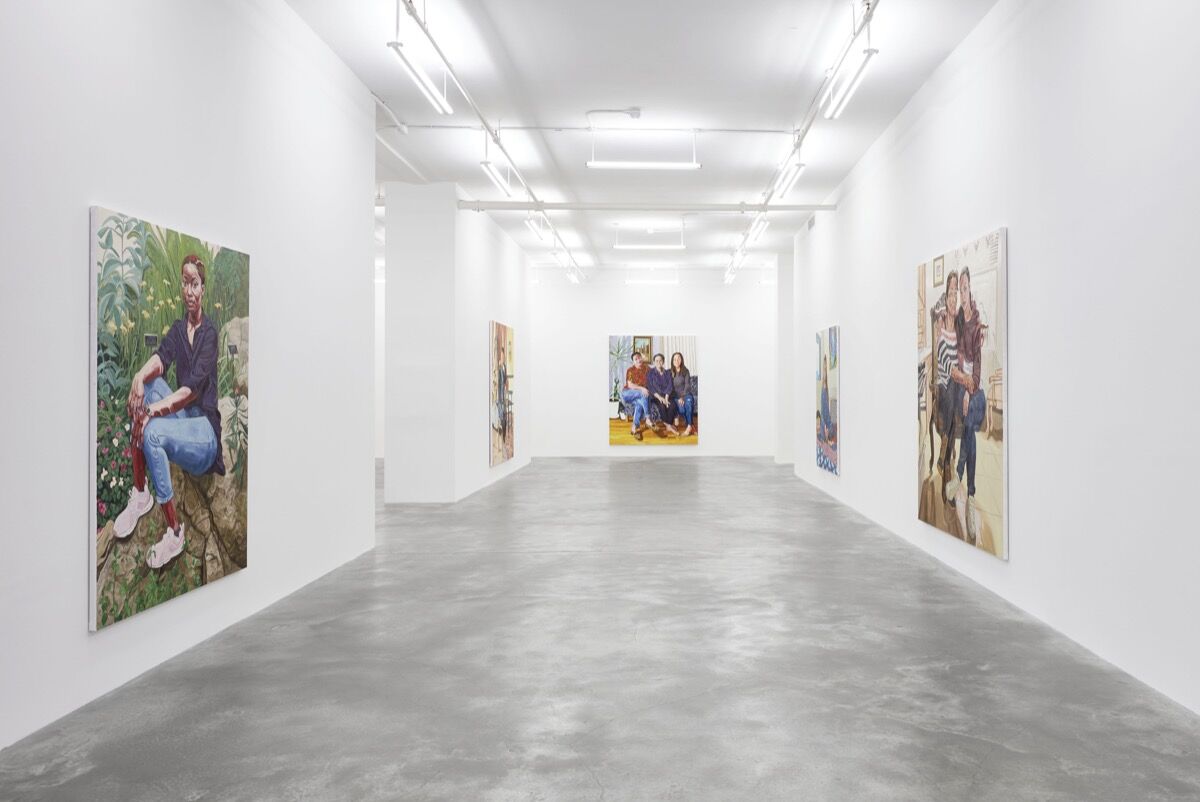 The 30-year-old painter
Jordan Casteel
has one-upped herself with this latest body of work. Her new paintings are loving, larger-than-life tributes to the undergrads she’s been teaching for the past few years at Rutgers University. The artist reflects on her empathetic approach to teaching, and a book by bell hooks, Teaching to Transgress: Education as the Practice of Freedom (1994), which describes the mutually beneficial relationship between teacher and student. 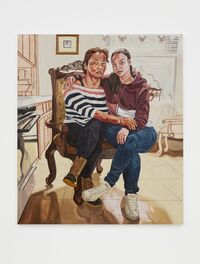 Jordan Casteel
View Slideshow
3 Images
In the paintings, Casteel’s students appear in their chosen settings: a bedroom lined with paintings, with butter-yellow bed linens and a stuffed panda bear; a patch of lush greenery at the Brooklyn Botanical Gardens; the family room at home with mom. The painter’s care and admiration for her sitters comes through in deeply intentional brushstrokes that range from highly gestural and textured to incredibly precise and painstaking. Casteel keeps great company among the most exciting figurative painters working today, yet she’s carved out a space and a style completely her own. Whether she’s focused on a time-worn face or a plastic Target bag—a prominent feature of one smaller painting—she harnesses the vivid details of the everyday, channeling the human spirit through paint.
—C.L. 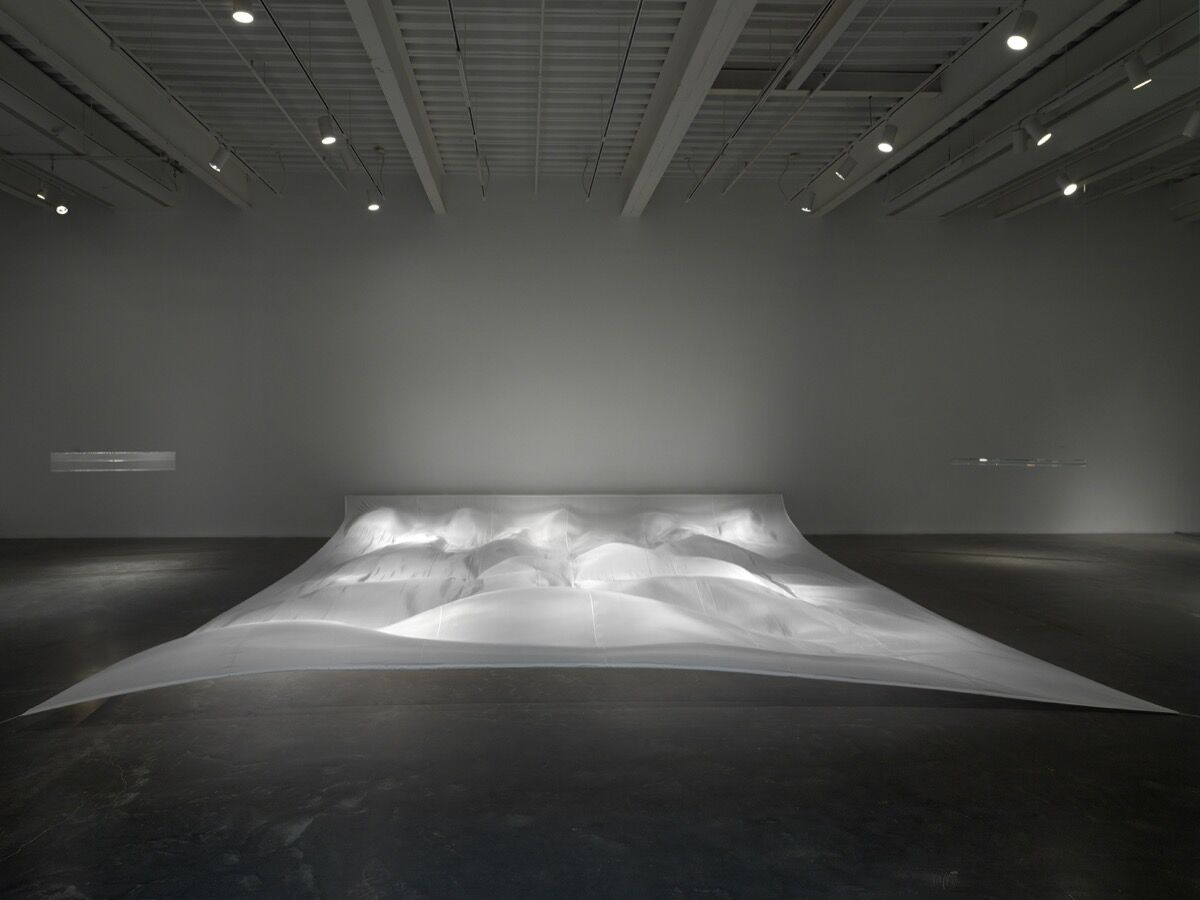 In
Hans Haacke
’s installation of photographs and text Shapolsky Et Al. Manhattan Real Estate Holdings, A Real-time Social System, As Of May 1,1971 (1971), the artist exposed that a major real estate group was capitalizing on low-income New York neighborhoods. The piece spurred then-director of the Guggenheim Thomas Messer to cancel Haacke’s solo show at the museum that year, inciting controversy and leading to the firing of the curator. No ties between the real estate group and the Guggenheim were found, but the work propelled Haacke’s dedication to investigate the inner workings of the art establishment, as well as government organizations and corporations. The artist’s current retrospective at the New Museum, “Hans Haacke: All Connected,” feels fresh in the present, as major art institutions are pressed to contend with their problematic financial backers. 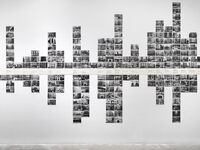 Hans Haacke
View Slideshow
3 Images
The show demonstrates the great range of Haacke’s work—from conceptual experiments with electric fans to a visualization of the contentious provenance of a
Georges Seurat
painting to survey data of the art-going public. Yet as the artist makes clear (in the show’s excellent wall labels that he wrote himself), it all comes back to an earnest quest to instigate change.
—C.L. 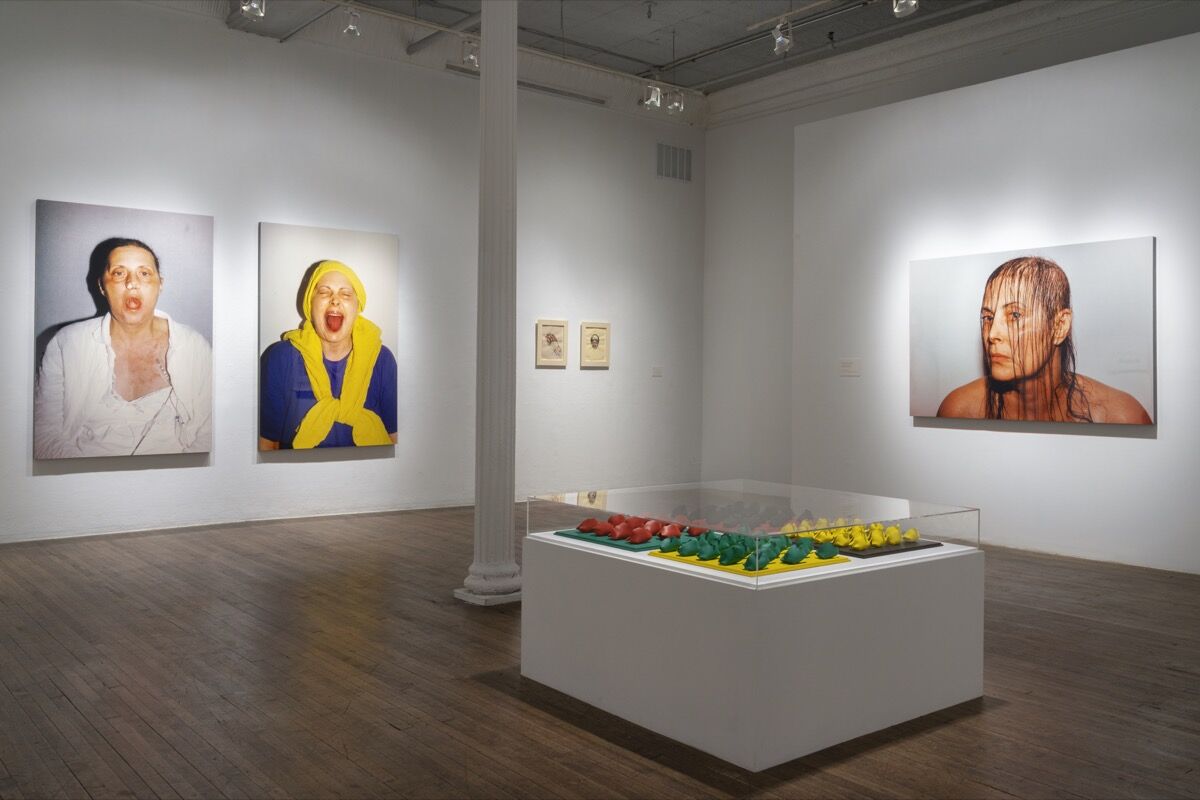 Traveling uptown to downtown on the 6 train, you can organize your own Tour de Feminism and hit two solo presentations very much in dialogue with each other. First, stop at Hauser & Wirth’s East 69th Street townhouse, where an
Alina Szapocznikow
show features plaster and foam sculptures that conjure soft, rolling stomachs, and skinny lamps with phallus-shaped bases and light covers that resemble breasts and lips. 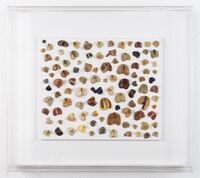 Hannah Wilke
View Slideshow
4 Images
Next, get off at the Canal Street stop for the
Hannah Wilke
survey at SoHo’s Ronald Feldman Gallery. Here you’ll find the artist’s suggestive, folding ceramic and terra-cotta boxes and assemblages with vaginal-shaped chewed gum that put contemporary chewed gum artworks (looking at you,
Dan Colen
) to shame. 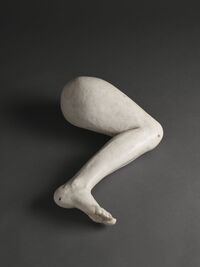 Alina Szapocznikow
View Slideshow
3 Images
Both artists revelled in shocking, sexually explicit presentations; met tragic ends as cancer ravaged their own bodies; and, most importantly, offered affecting and innovative new ways to think about sculpture. Their work oozes with sexy, grotesque visions of femininity and compelling refutations of traditional, figurative, three-dimensional forms. Szapocznikow’s The Bachelor’s Ashtray I (1972), for example, is a polyester resin bust of the lower half of a woman’s head. Real cigarette butts appear to float on top. The juxtaposition of the plush pout and ashy nubs suggest a very Freudian union of sex and death. Same goes for Wilke’s series of black-and-white films “So Help Me Hannah” (1979–85), in which the artist dances in the buff while wielding a small, dark gun.
—Alina Cohen 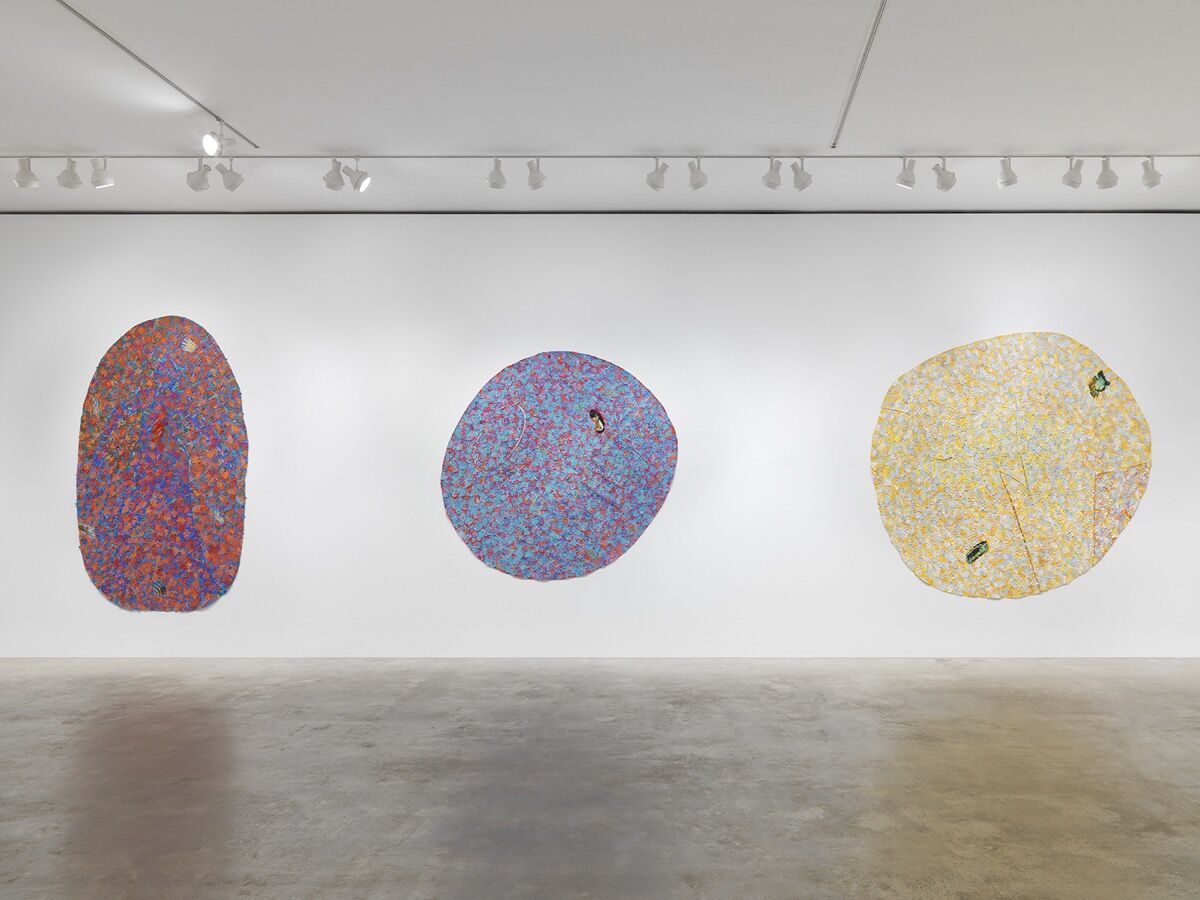 At first, the orange booklet that Garth Greenan Gallery has published in conjunction with its
Howardena Pindell
show seems superfluous. The unstretched, round-edged canvases are riots of texture and color that speak for themselves. Autobiography: Artemis (1986) features cross-hatched chartreuse and periwinkle brushstrokes against a sunny background, while Pindell’s signature hole punches populate the surface of her powder-blue Autobiography: Japan (Shisen-do, Kyoto) (1982). Embedded pictures of houses, hands, and abstracted shapes emerge from the canvases’ glistening grounds as indications of the hardships and tragedies that underlie Pindell’s lovely surfaces. One painting, Autobiography: Fire (Suttee) (1986–87), features the outline of her body—a visual representation of how the artist’s life is inextricably bound up in her work. It’s also, as the booklet points out, a fitting tribute to the late artist
Ana Mendieta
, one of Pindell’s friends. 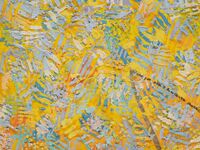 Howardena Pindell
View Slideshow
3 Images
Ultimately, the publication may be best read as a rich, romantic account of Pindell’s life: She details her stay in an Indian ashram, her 3.5-month-long trip to Kyoto, and her recovery from a nearly fatal car accident. Anecdotes about her healing process, DNA, and religious affiliations may offer hints about meaning and impulses throughout Pindell’s practice, but mostly, they provide a compelling outline of a life well-lived. The stories made me wonder when we’re getting a full Howardena Pindell biography. I’d read it.
—A.C. 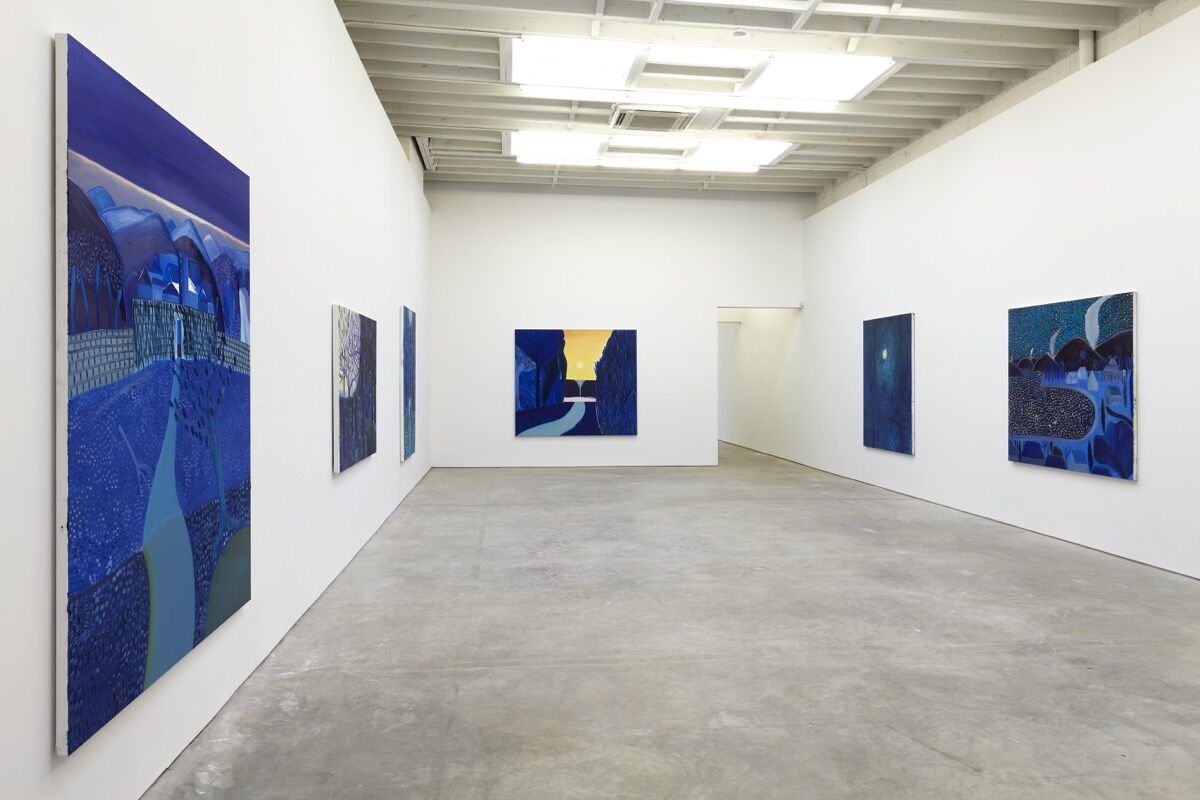 Karma has mounted a deeply moving tribute to
Matthew Wong
, the 35-year-old artist who died last month by suicide. During his brief career, the artist left his own sensitive and lovely marks. No works are for sale, out of respect to Wong’s family. Blue hues unite the melancholic presentation, split into two spaces where paintings and works on paper are on view. 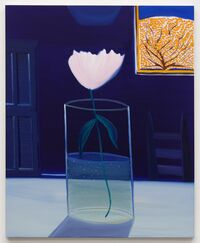 Matthew Wong
View Slideshow
3 Images
Nods to Georges Seurat’s
pointillism
and
Yayoi Kusama
’s “Infinity Nets” give texture to this self-taught painter’s canvases, which also demonstrate a burgeoning visual language all their own. The works feature spooky, solitary scenes: a ray of light slanting onto a table in an empty room; the moon shining through slatted blinds; a lone flower sprouting from a half-full water glass. Light and darkness coexist in these compositions, and the viewer can see the quiet appeal of the latter. At a more intimate scale, the works on paper are even more heartbreaking. They feature a tiny car driving through the dark, a ruffled gray curtain concealing a window view, and a small house with a chimney issuing smoke into the pitch black sky.
—A.C.
Alina Cohen
Casey Lesser is Artsy’s Associate Director of Content
Related Stories 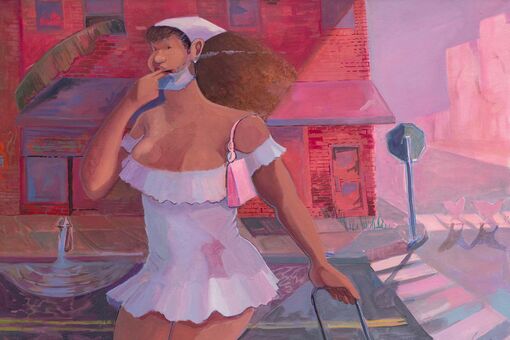