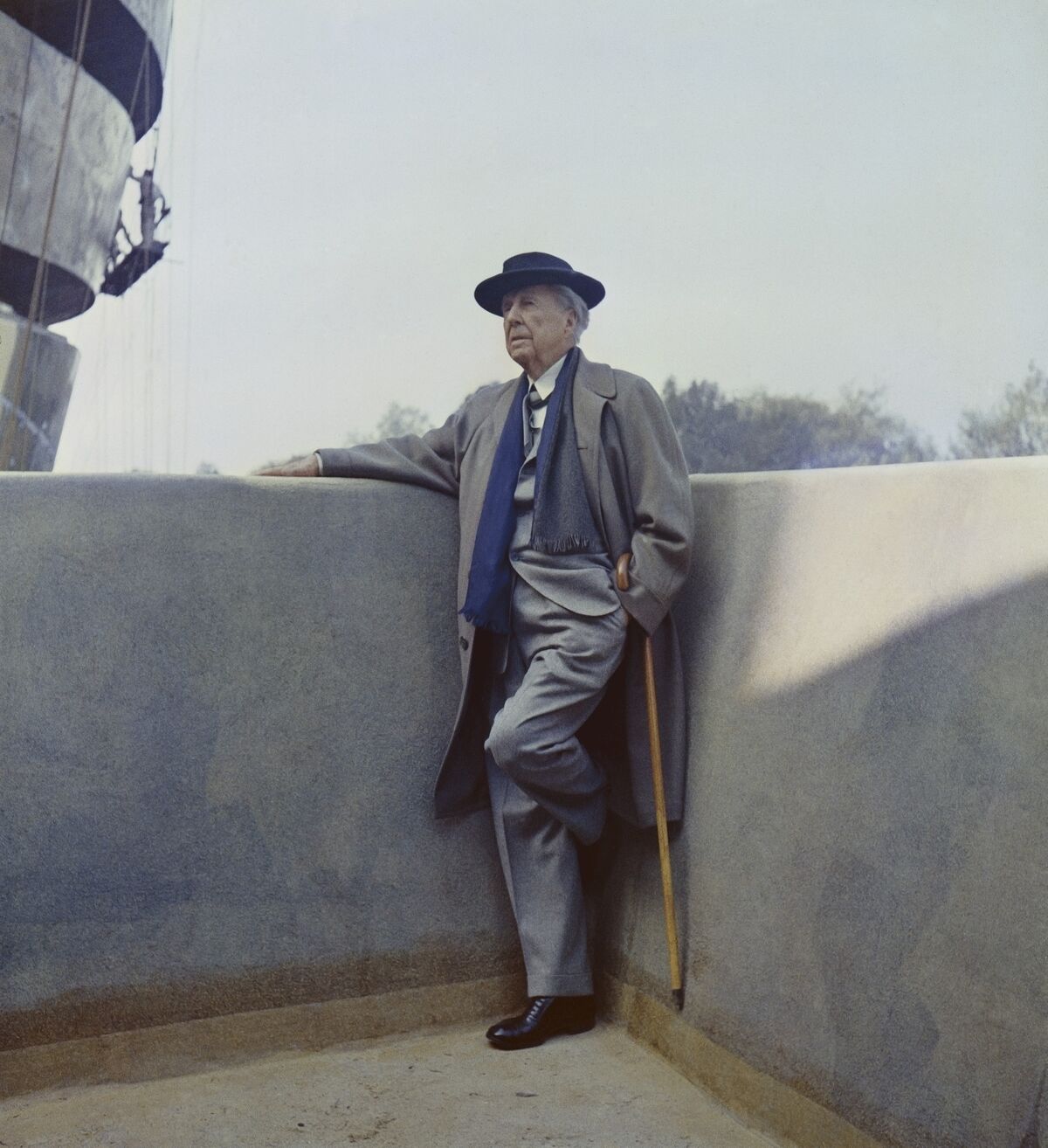 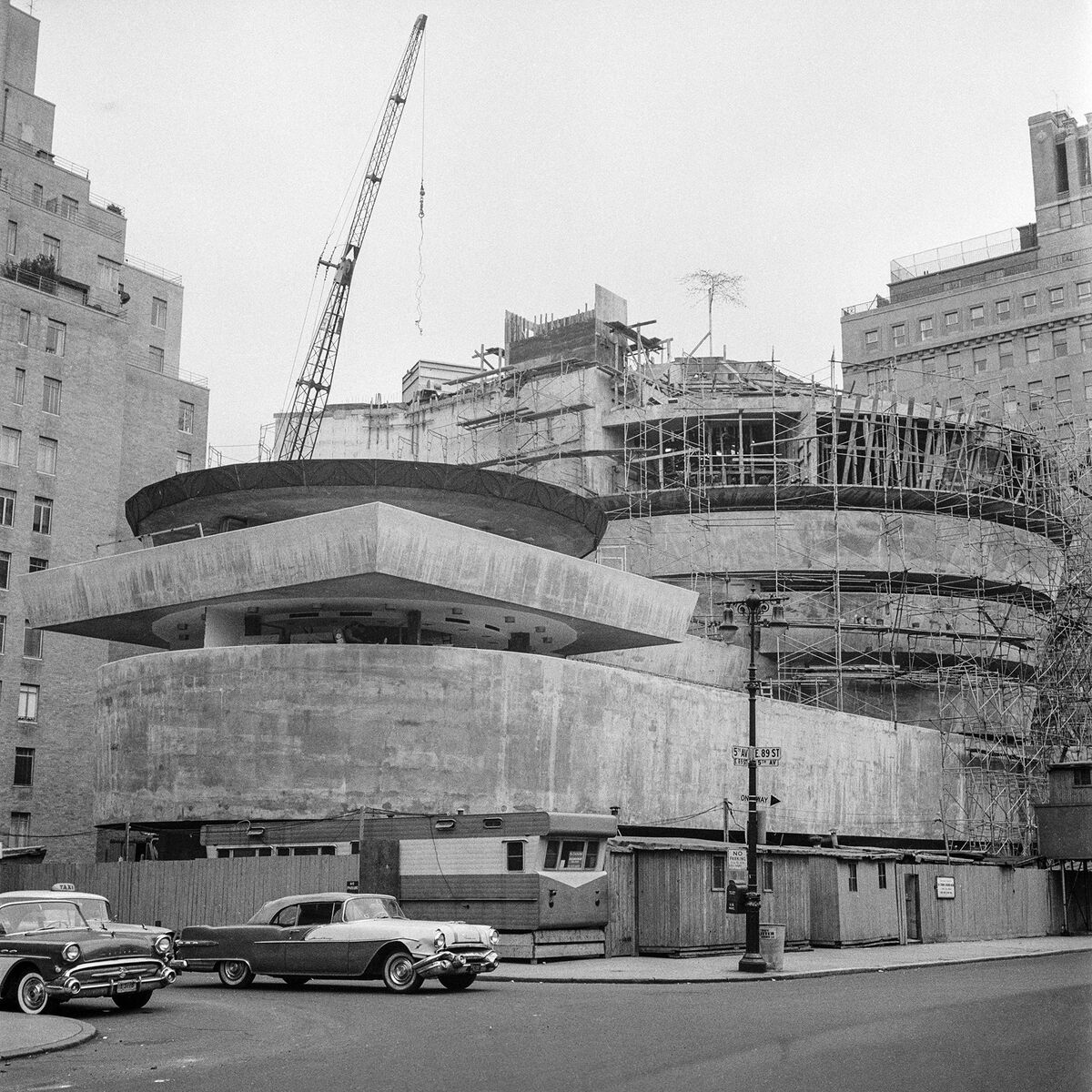 Frank Lloyd Wright
is synonymous with American architecture. His prolific career spanned over seven decades, during which he built 532 buildings throughout the United States. Wright embraced experimentation, but he was also a pronounced intellectual who developed influential theories about urbanism and environmental architecture.
On the occasion of his 150th birthday, we celebrate his life by looking deeper into some of the lesser-known aspects of his work and life.

1. His childhood greatly influenced his ideas about architecture. 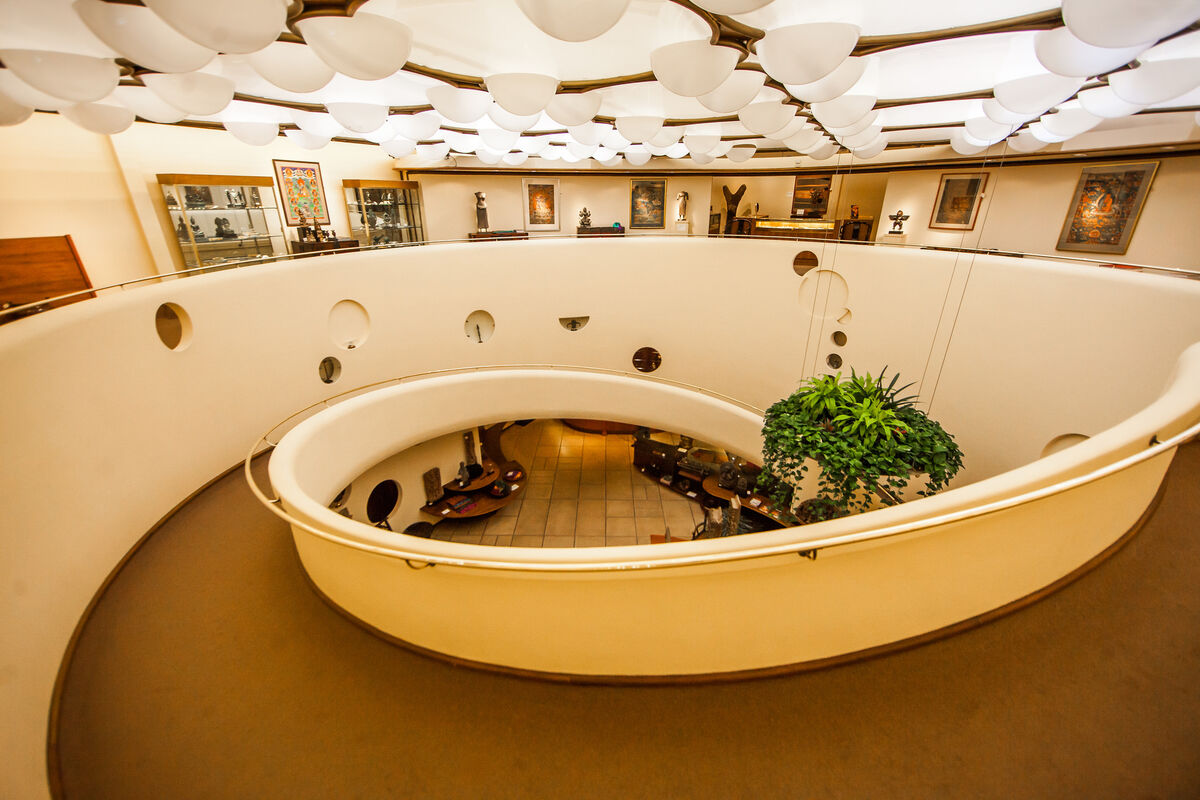 Some might even say that Wright was predestined to be an architect. His mother, Anna Lloyd-Jones, thought that her son would be a great builder and even before he was born, she decorated his nursery with pictures of Gothic cathedrals to inspire him one day. An engagement with nature was also ingrained early on; both of his parents were avid readers who introduced him to Transcendental Philosophy and he spent many of his summers working on his uncle’s farm.
Throughout his education (he was homeschooled until he was 11), Wright learned the value of learning by doing. One of his most significant early influences came from his exposure to Froebel training. His mother purchased a set of the educational building blocks created by Friedrich Froebel, the founder of the first kindergarten, when Wright was nine. Interacting with the Froebel blocks gave Wright a very tactile, direct experience of architecture, while reinforcing the idea that one could design the world, not just represent it. In his old age, Wright would still remember this experience: “The smooth shapely maple blocks with which to build, the sense of which never afterwards leaves the fingers: so form became feeling,” he once wrote.

2. He originally wanted to make the Guggenheim out of red marble. 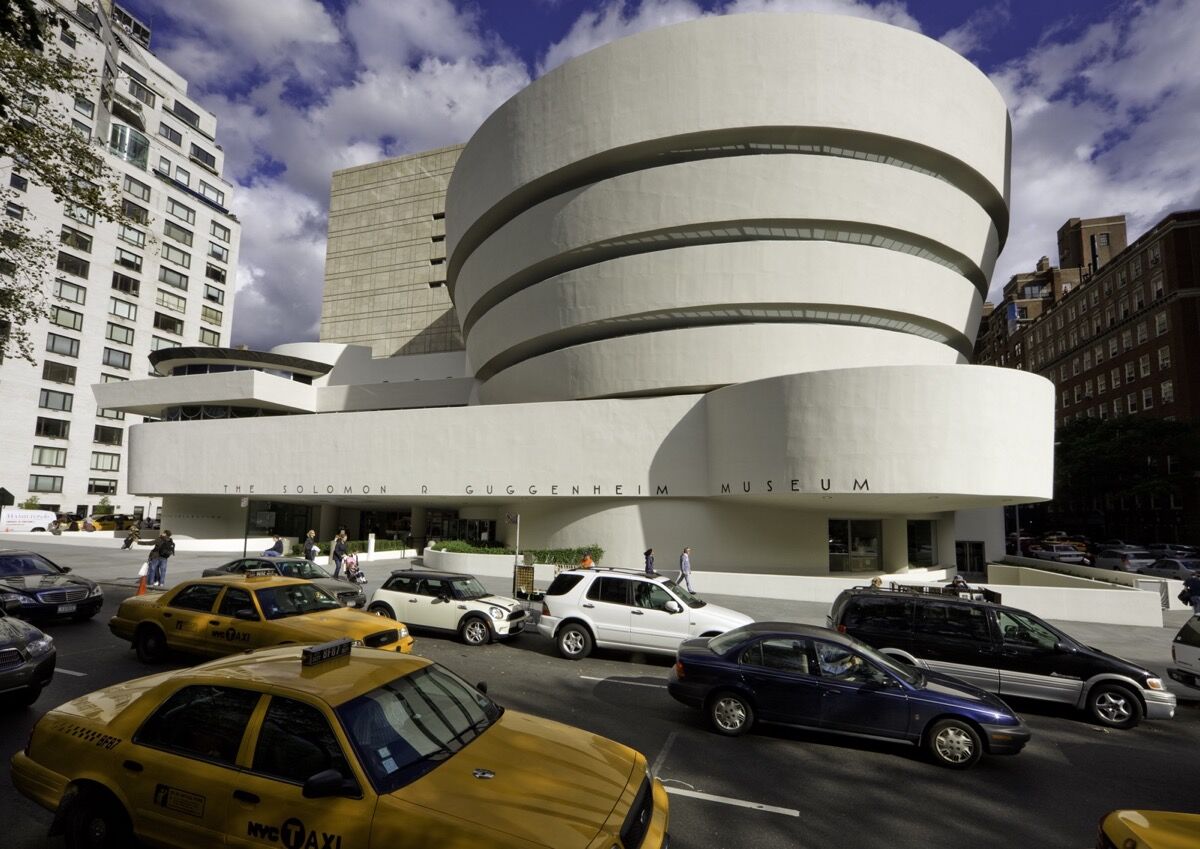 Advertisement
Discussion surrounding Wright’s innovative design for the Solomon R. Guggenheim Museum in New York has most often focused on its spiral. But, had the architect been able to realize his initial vision, we might have had something more startling to talk about.
Wright wrote of his plans for the project in January 1944: “exterior: red-marble and long-slim pottery red bricks.” Hilla Rebay, the art advisor to Solomon R. Guggenheim at the time, quickly quashed this in a 1945 letter by saying: “Red is a color which displeases S. R. G. as much as it does me.” She recommended yellow or green marble instead. Wright, who was usually uncompromising, did not push the matter further, but he designed a new scheme with an exterior made of white concrete and polished marble gravel. When the building finally opened in October 1959, Wright had already passed away in April, and the color had been changed from his specification of “PV020 Buff” to a shade of cream and very soft yellow.
Red—more specifically, a shade called “Cherokee red”—was Wright’s favorite color and carried great symbolic value. In an article he wrote for Architectural Forum in 1938, he quoted plant physiologist Kliment Arkadevich Timiriazev, who said that “the color red is invincible. It is the color not only of blood—it is the color of creation.” He used the color in many of his residential projects (at times despite his client’s wishes).

3. He was a dealer of Japanese art. 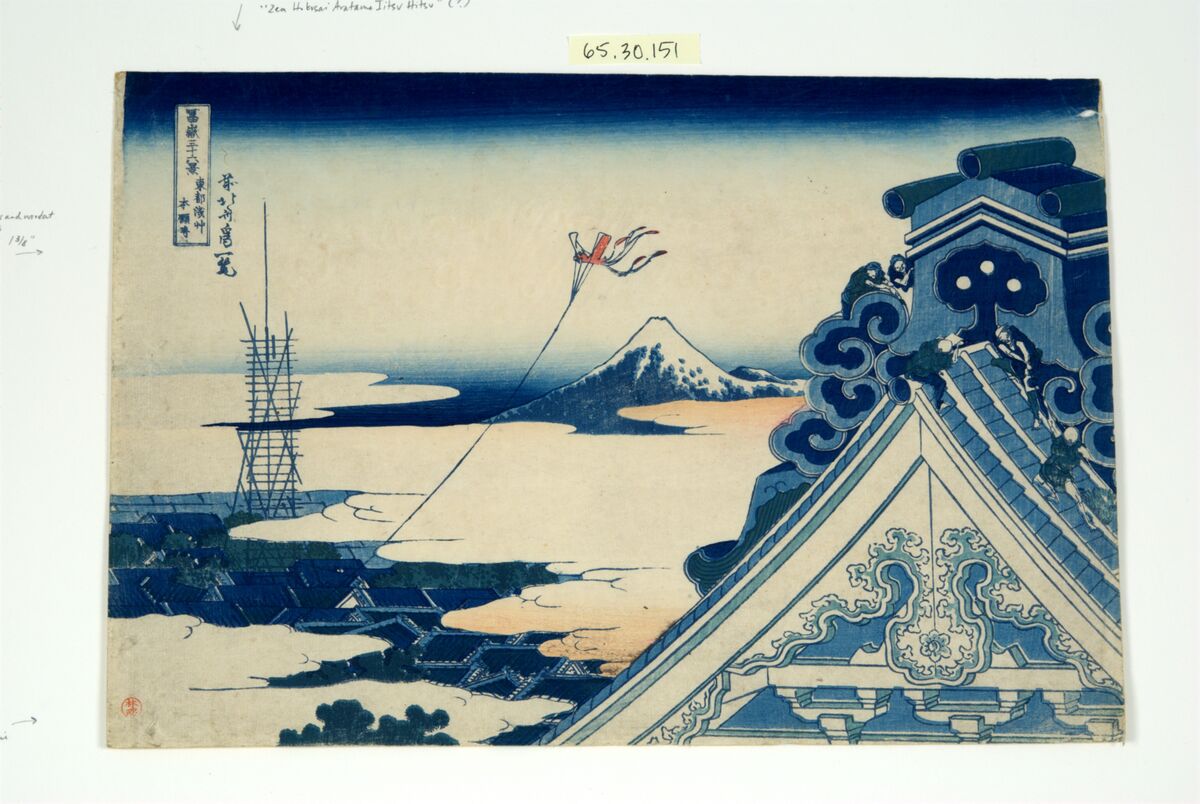 Wright had a lifelong fascination with Japanese art, which had a great influence on his aesthetic. “I remember when I first met the Japanese prints. The art had a great influence on my feeling and thinking,” he once said. “When I saw the print and I saw the elimination of the insignificant and simplicity of vision, together with the sense of rhythm and the importance of design, I began to see nature in a totally different way.”
He amassed a significant collection of Japanese
ukiyo-e
prints on several trips he made to Japan, beginning in 1905, and significantly between 1917 and 1922, during which time he was living in Tokyo and working on building the Imperial Hotel there. Back in the U.S., Wright sold these Japanese prints to a long list of private collectors, and on multiple occasions exhibited his collection in museums.
Selling the prints, or using them as collateral, was a financial backup during the periods when his architecture business was slow. In fact, during the Depression, he was forced to sell much of his collection to pay off debts. But Wright’s reputation was hurt in 1920 when he was accused by an expert in the field of selling prints that had been altered or “revamped.” Wright alleged that his print dealer in Tokyo, Kyūgo Hayashi, had fooled him, and as a result Hayashi went to prison for a year. It remains unclear if Wright was involved in the matter; reportedly, the architect was known to add colored pencil or crayon to the Japanese prints he owned.

4. He developed his own comprehensive theory of “organic architecture.”

Though Wright was not the first to use the term “organic architecture,” he started  developing his own definition for it early on in his career. His mentor Louis Sullivan was well known for the mantra “form follows function,” which was famously expanded by Wright to “form and function are one.”
Wright’s organic architecture differed from those who came before him; rather than focusing on imitating natural forms, he looked to reinterpret ideals found in nature. “Study nature, love nature, stay close to nature, it will never fail you,” he once said. Wright’s organic principles center on creating connections between the inhabitants and the landscape, the use of new materials like glass and steel to achieve more expansive spatial relationships, and maintaining respect for the properties of materials. Most important to Wright’s organic architecture was the belief that architecture has an intrinsic relationship with its site and the historic time in which it is built.

5. Some of his most beloved buildings were plagued by maintenance problems. 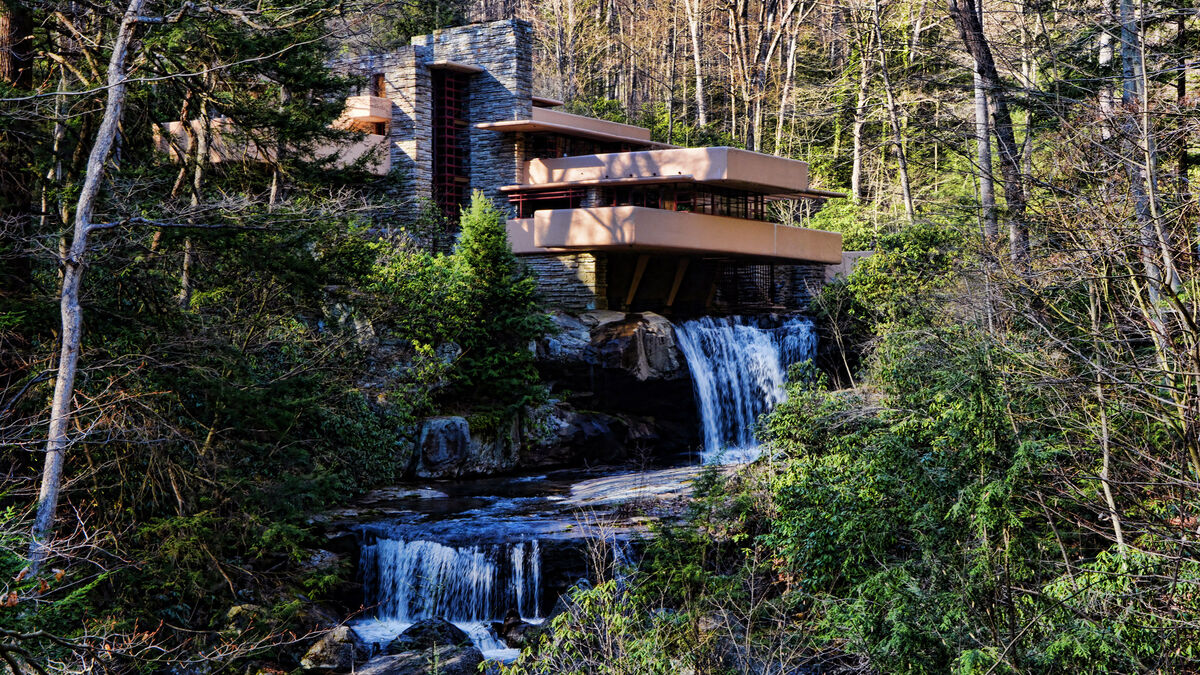 Wright was indisputably a design innovator, but some experts have noted that, in the interest of getting things built, he would look for shortcuts during the construction process. The structural engineer working on Fallingwater warned Wright that there wasn’t enough steel in the structure to support the poured concrete. Though Wright overruled him at the time, the engineer’s fear was justified when the building needed a serious renovation down to the structural level, lest its famous cantilever would drop into the water.
A long list of complaints including leaking roofs, weak foundations, and drainage problems plagued many of his commissions, but Wright considered these issues the price to pay for innovation. This attitude is perfectly captured in an anecdote from Herbert Johnson, one of his clients, who called Wright during a dinner party to report a leak on his head. Wright replied by simply suggesting he move his chair over. 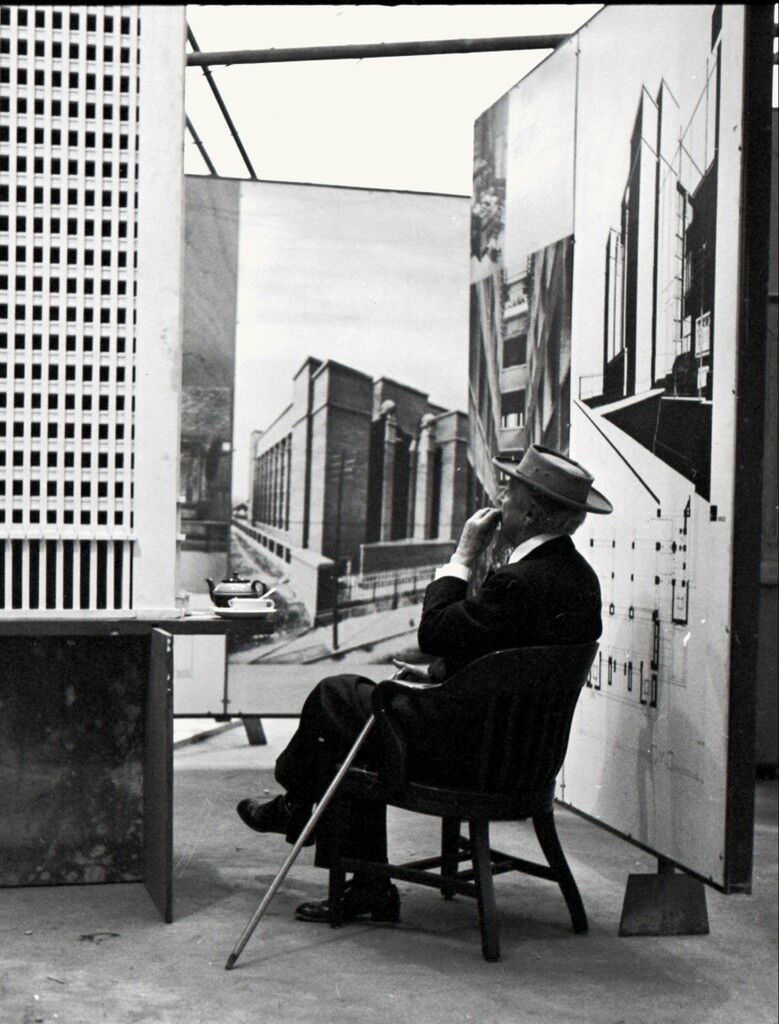 Pedro E. Guerrero
Frank Lloyd Wright, Tea Break, Guggenheim Pavilion, New York, NY, 1953
Edward Cella Art and Architecture
Wright designed over 1,000 buildings, of which only 532 were realized. Among his unbuilt works, the “Mile High” Tower proposal of 1956 for Chicago stands out. If it had been built, it would still be the tallest building in the world today. Standing at 5,280 feet and 528 stories tall, the building would have required a foundation deeper than the height of the Empire State Building. Wright estimated that just three of these towers would be sufficient for the entirety of New York City.
Though certainly fantastic, the project was technically feasible. Many of Wright’s critics postulate that it went unbuilt because it was an ill-advised publicity scheme. Architectural historian Lewis Mumford wrote that “all of Wright’s egocentric weaknesses were crystallized in an ultimate fantasy…a proposal that violated every canon of Wright’s own conception of an organic architecture.”

7. He loved cars and collected them throughout his life. 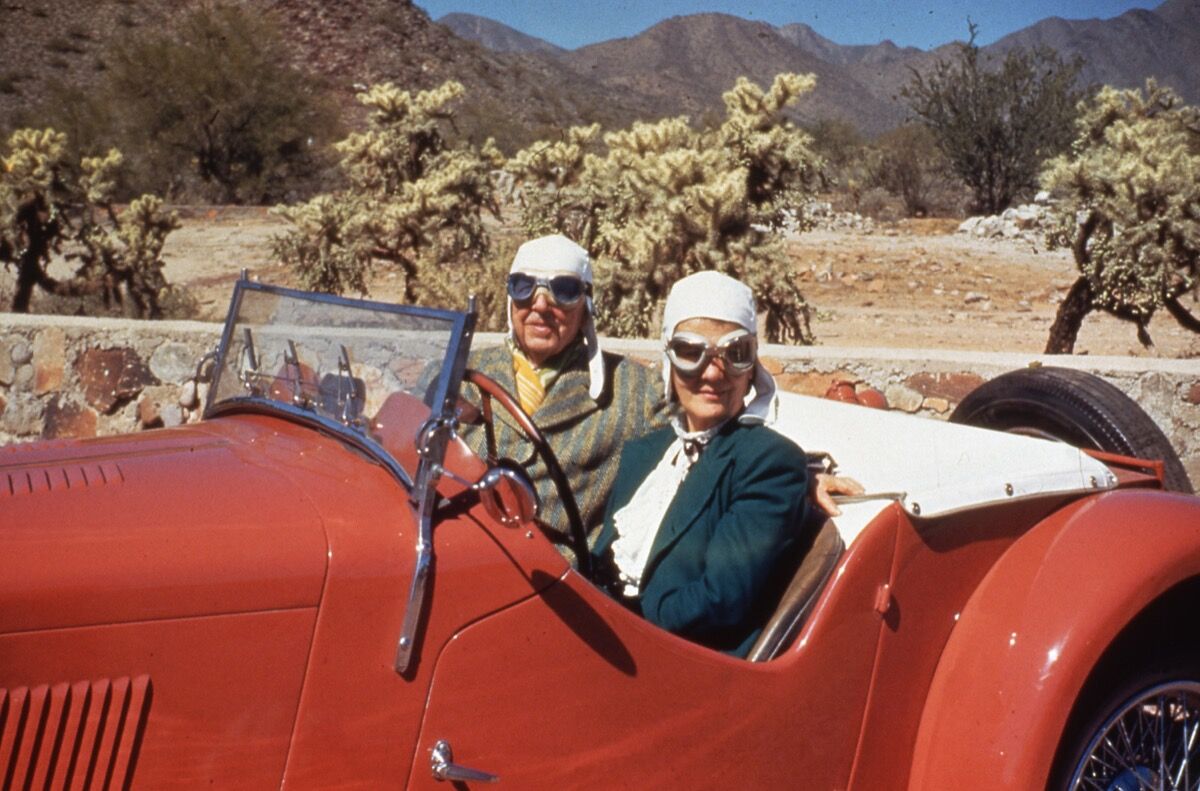 Though Wright’s birth in 1867 was well before the advent of gasoline-powered automobiles, he was a fan of cars throughout his life. The car as both form and symbol would inspire his ideas about design.
Wright was enamored with speed. His first car, a Model K Stoddard-Dayton roadster, was the same model that had won the first automobile race, which was held at the Indianapolis Motor Speedway in 1909. He went on to collect cars throughout his life, including models from Bentley, Mercedes, and Jaguar, among others. His signature vehicle was the Lincoln Continental. Around 1940 he ordered two Continentals, both painted his favorite color, Cherokee Red.
Early on, Wright was conscious that the prominence of automobiles signaled a cultural shift in America. His plan for the the utopian Broadacre City—which he developed from 1932 through the end of his life—was based around the idea that the near-universal availability of mass-produced automobiles would fundamentally decentralize American cities.
Alexandra Alexa
Related Stories