7 Unexpected Artworks to See in Subway Stations around the Globe

Isaac Kaplan
Dec 6, 2016 3:47pm
For city-dwellers, subways are a fact of life—love them (as I do) or hate them (as I also do). Though they’re awe-inspiring when you stop to think about their design and construction, subways are first and foremost mechanisms to get from point A to point B, utilitarian systems that reduce our daily commutes to requisite mundanity. But subways are also human spaces, and, as such, they can reflect the creativity of the people who use them. From beautiful station design to artworks commissioned by transit authorities to spontaneous installations responding to current events, subway systems are spaces where art can be encountered every day, by millions of people. Here, we share seven striking examples of subway art in cities across the globe. 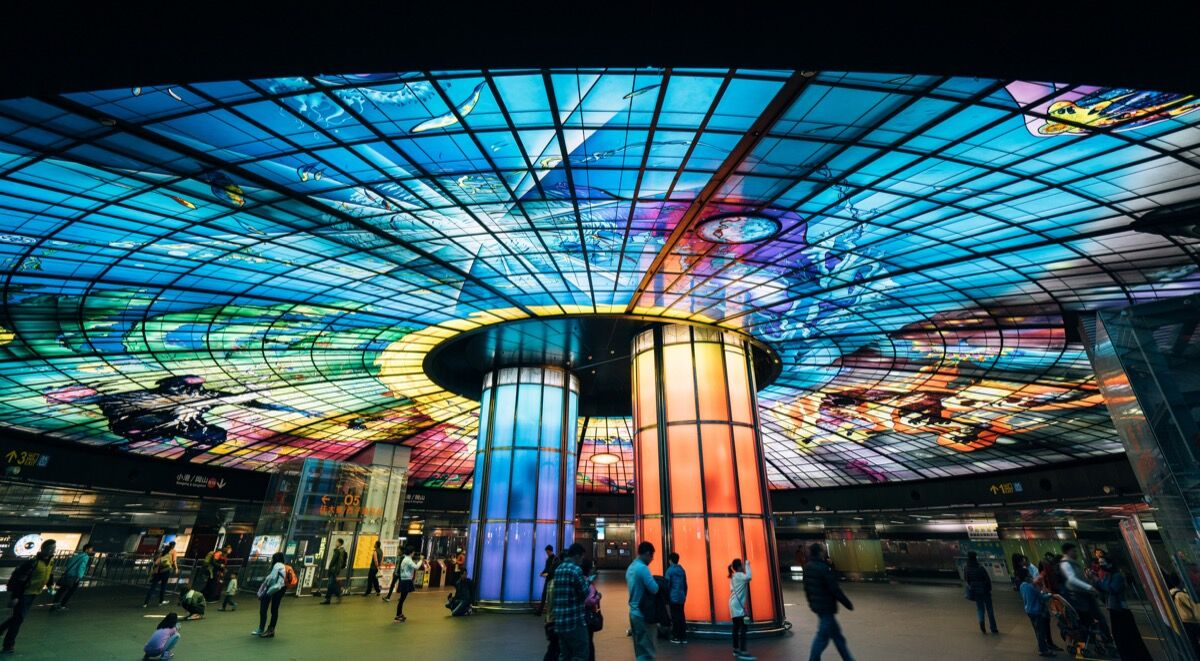 Formosa Boulevard station, located in Taiwan, boasts the largest public glasswork made of individual panels in the world. Consisting of over 4,500 glass panels stretching across 30 meters, The Dome of Light was designed by Italian artist Narcissus Quagliata. The work, which shows “the story of human life” through the ages, took over four years to complete and was shipped from Germany, where it was manufactured. The station that houses the work is named after the Kaohsiung Incident, a seminal event in Taiwanese history in which pro-democracy protesters, following the arrest of two Formosa magazine workers, gathered to commemorate Human Rights Day. The activists’ arrests—by Chinese authorities, who at the time controlled the island—are credited with galvanizing protests against China and eventually leading to the rise of Taiwanese democracy. Advertisement
Sometimes the subway station doesn’t house art—it is art. Take the wonderful Paris metro. When the system was being built around the fin de siècle, the French railway company behind it launched a competition to determine who would design the stations. The winner,
Hector Guimard
, is now hailed as a master of the
Art Nouveau
style. He designed entrances for 141 stations, of which 86 still exist, in two styles. The now-iconic heavy green metal station entrances, some even sporting glass roofs, and ornate “Metropolitain” signs beckon passengers belowground, exuding a style and grandeur many associate with the soul of Paris (one even sits in MoMA’s sculpture garden in New York). Over the years, new stations in different designs were added to the metro system—an example of how subways evolve to reflect a changing city.

The people riding the New York City subway are often a diverse microcosm of the city itself (well, unless you’re waiting for the L train at Bedford Avenue). The subway’s ability to capture the fabric and feelings of New York was particularly true in the days after Donald Trump’s victory, when seeing shell-shocked straphangers burst into tears was a common occurrence. But the Union Square station became a site of catharsis thanks to an installation by artist Matthew Chavez. Titled Subway Therapy, the work let people leave words of healing, positivity, compassion, and resolve on Post-it notes that quickly filled the station walls. The project has since spontaneously sprung up in cities across the globe, and it remains in Union Square to this day. 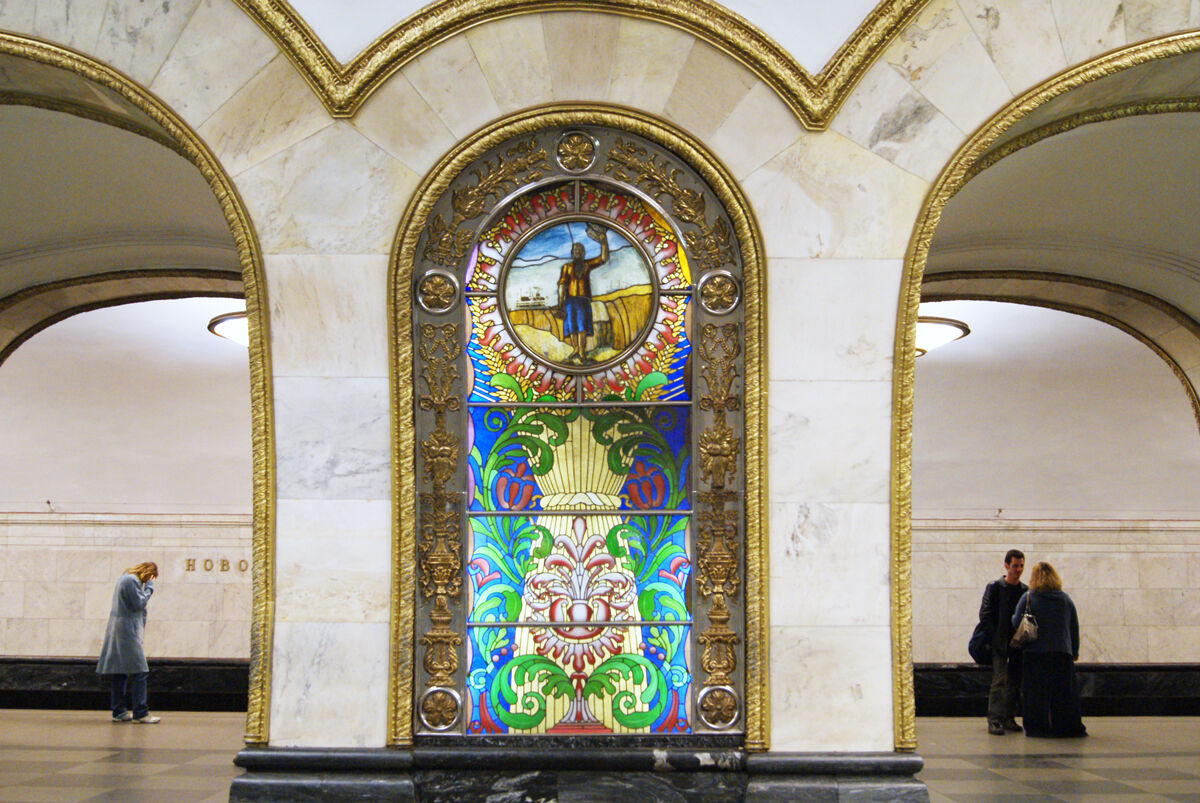 Say what you will about the Soviets, but they knew how to build a train station. Moscow’s metro is among the most visually stunning in the world, exuding a baroque opulence rarely found in public spaces like subways that were primarily meant for the daily grind of the working class. First opened in May 1935, the system is adorned with murals and works of art, including some made even after the Soviet Union collapsed (the still-expanding system is slated to be the fourth largest in the world by 2020). One of the most famous stations is Novoslobodskaya, known for its 32 stained-glass murals by Latvian artists. The decorations throughout the underground system also feature a fair amount of propaganda, such as a mosaic in Kievskaya station that shows smiling Russians and Ukrainians in happy harmony. 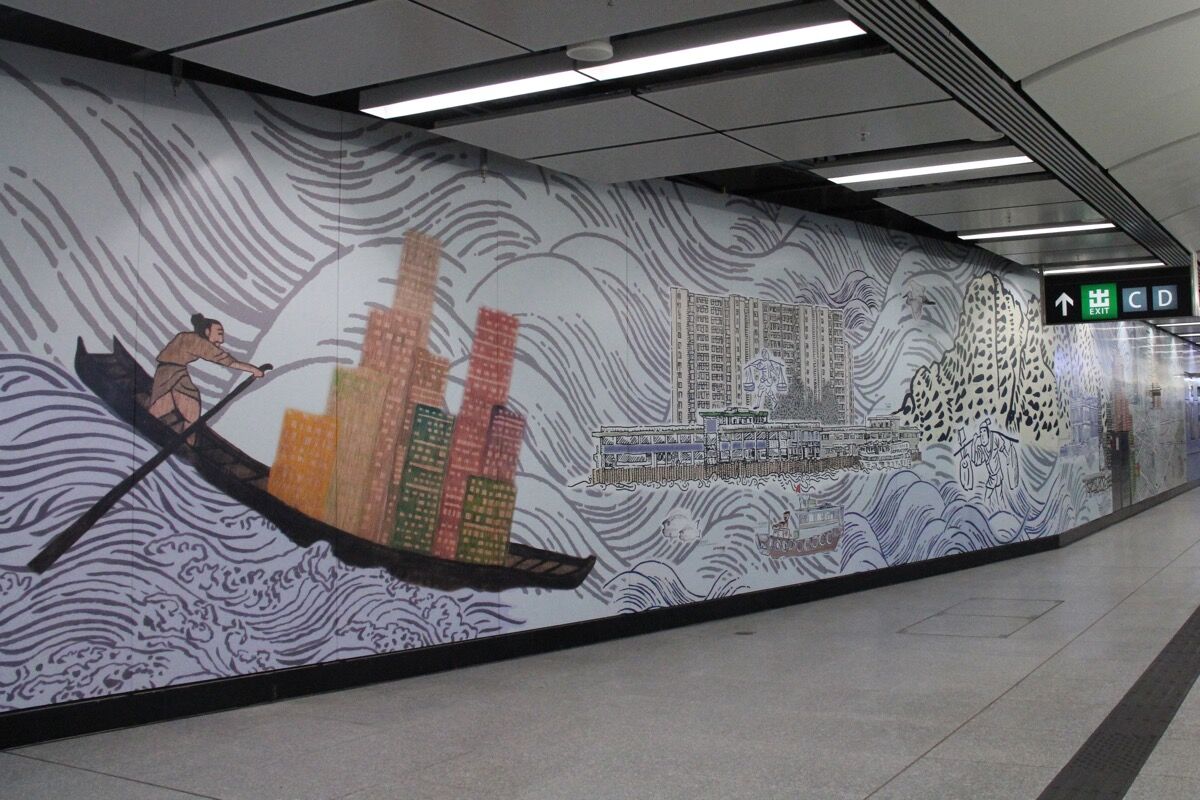 Hong Kong’s public transit system, the Mass Transit Railway (MTR), is one of the most profitable in the world, with trains also boasting an on-time rate of 99.9 percent. (As a New Yorker used to the MTA, that statistic is mind-imploding.) Even though commuters might not have to wait extra time for a train, there’s plenty of art throughout the system. Of particular interest are the community art galleries, a project that began in 2000. Originally at just one station, these galleries feature works by local residents, schoolchildren, and nonprofits. There are now 55 such galleries across MTR, complementing a robust number of artworks in stations by professional artists from across China and the rest of Asia.

The London Underground may (mostly) lack air conditioning, but its efficiency, iconic design, and commitment to art (mostly) make up for it. Indeed, Transport for London (TFL) provides a handy “art map” that lays out the art one finds across the system, tracing a contemporary commitment to art back to Frank Pick, an early Tube administrator who had a passion for good design. The headquarters of the London Underground was constructed between 1927 and 1929 (during Pick’s tenure), featuring a facade adorned with numerous modernist reliefs by a range of British sculptors. The works sit above St. James’s Park Station and originally drew the ire of the press for being too risqué. Sculptor
Eric Gill
made three contributions to the building (smaller versions of two found their way into the Tate’s collection). As a whole, the sculptures reference Athen’s Tower of the Winds—an ancient building that featured sundials, a water clock, and a wind vane. It’s a fitting homage for a building that houses the authority meant to keep the trains on time.

Stockholm’s underground, often called “the world’s longest art gallery,” may take the prize for being the most all-encompassing work of art. Entire stations have been transformed into environments that speak to the history of Sweden, including the Per Olof Ultvedt-decorated T-Centralen, which honors the workers who built it through blue silhouetted figures sprawled across the ceiling. In the 1970s, more radical work filled the metro, including a stunning mural by Anders Åberg and Karl-Olav Bjork in the Solna Centrum station that shone a light on deforestation and the displacement of Sweden’s rural population. In later decades, stations located further afield from the city center were filled with artworks, too. Today, the city offers free guided tours of the subterranean collection.
Isaac Kaplan is an Associate Editor at Artsy.
Related Stories 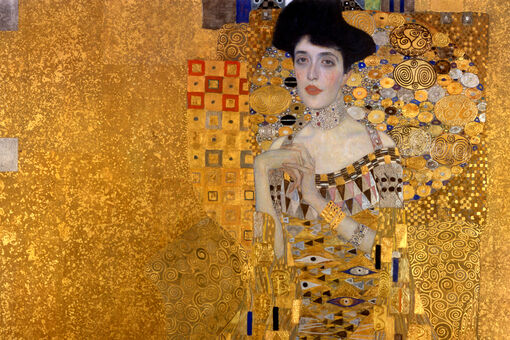