At 70, Body Modification Artist ORLAN Is Still Reinventing Herself 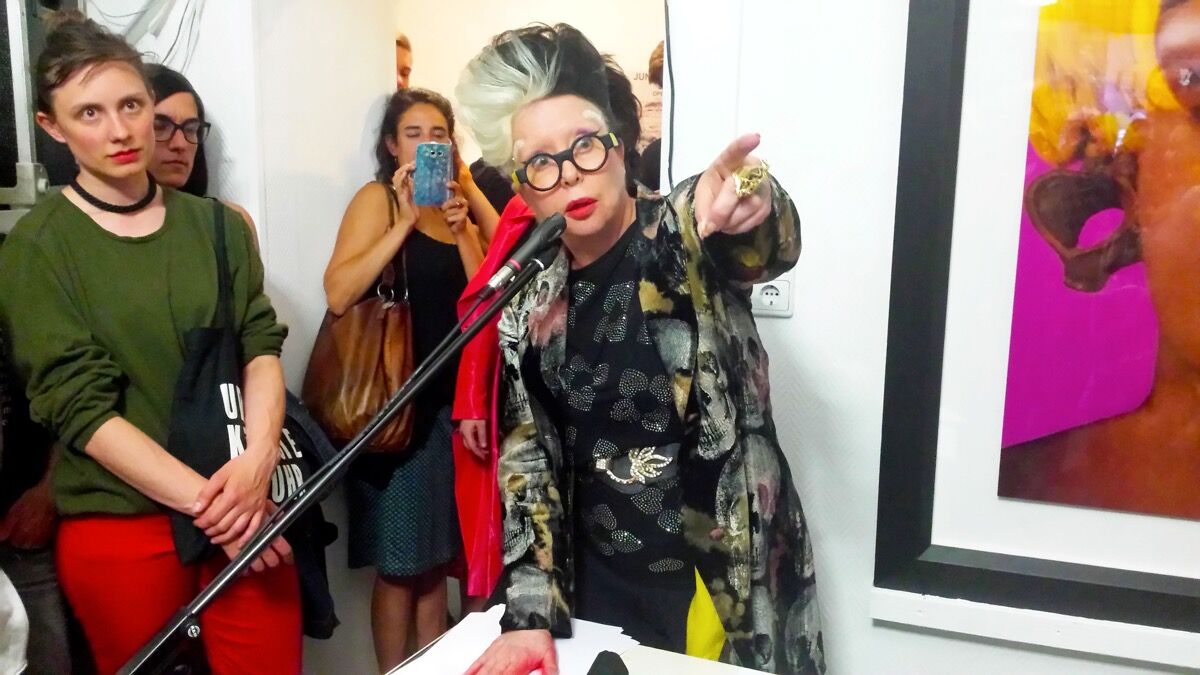 In 1977, the French artist known as
ORLAN
stood outside the Grand Palais in Paris, offering deep, amorous kisses to strangers in exchange for a small donation. Visitors were invited to insert five francs into the neck of her costume—a cutout of her own naked torso—which would tumble into a coin tray at her groin.
The kiss, which was accompanied by baroque music, would last for two or three seconds and end with an ear-splitting siren. Taking on the role of both Madonna and whore, woman and (slot) machine, Le baiser de l’artiste was one of ORLAN’s earliest cyborgs, and it scandalized the art world.
Today, at Berlin’s La Plaque Tournante gallery, an exhibition of ORLAN’s work spanning 50 years presents the myriad ways that the artist has courted controversy over the decades. It has the feel of an open archive and, though it’s somewhat chaotic as a result, it nonetheless demonstrates the cohesiveness of ORLAN’s body of work.
Looking through it, one has the sense that she has always worked toward a single, utopian mission, one that relies on the consistent use of her own body to create art. 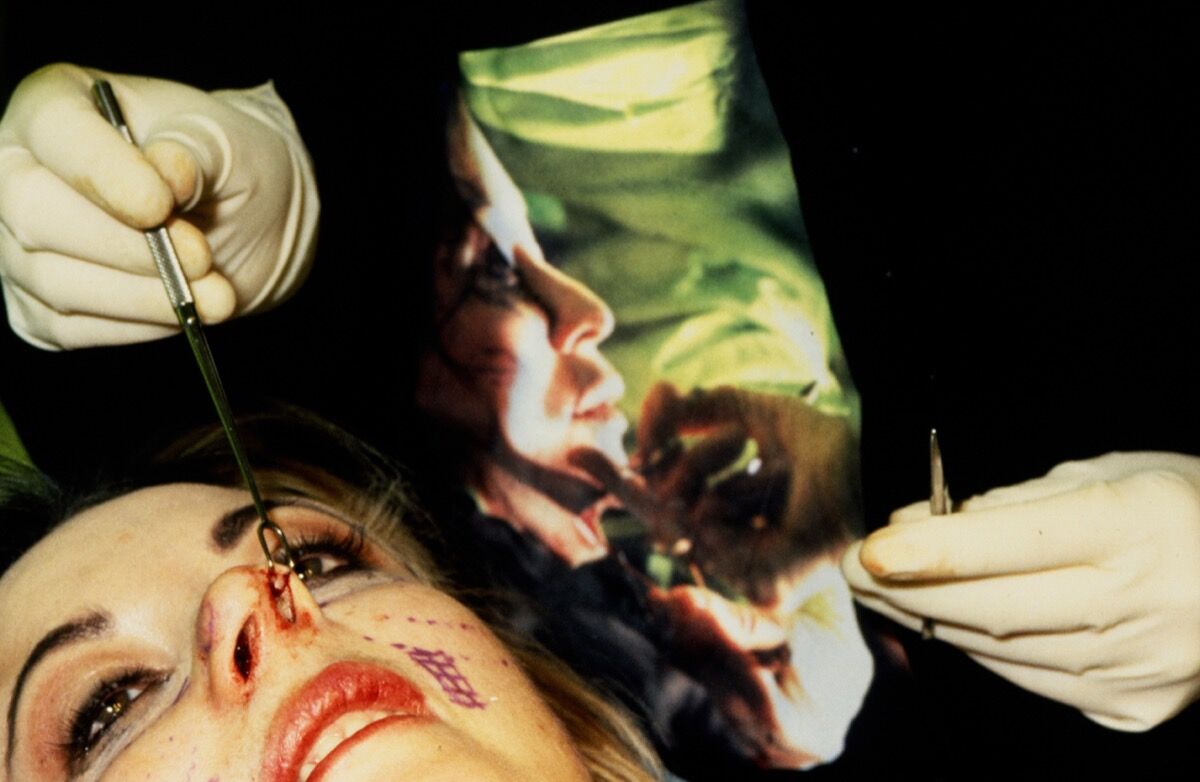 Over five decades, ORLAN, now 70 years old, has given birth to herself, dressed up as a saint, carried out several plastic surgeries, and digitally removed her own skin. It is this impulse to draw attention to herself at all costs that leaves her open to the charge of narcissism, and it’s one she doesn’t deny. Even her flamboyant nom de guerre was chosen immodestly.
“When I introduce myself,” she tells me, “I say ‘I am ORLAN, among others,’” meaning that she represents a multiplicity of different identities. “And every letter of my name is written in capitals,” she continues, “because I have no desire to step back into rank.”
Women, as British film theorist Laura Mulvey once wrote, have historically been the bearers, rather than the creators, of meaning in visual culture. A woman’s body, at least as far as the male heterosexual gaze is concerned, is a series of codes. In art, she is often found nude, recumbent, and passive. Her body is heavy with culture and discourse. In making five decades’ worth of self-portraits, ORLAN has taken control of her own image and staked a claim to her body.
This reached its zenith in the early 1990s, when she underwent nine facial plastic surgeries—including one that gave her her now-infamous forehead implants. She documented the entire performance on film, some of which can be seen at La Plaque Tournante. It’s gory, sure, but uplifting too: She’s shown fully conscious, smiling, and reading aloud to the camera. 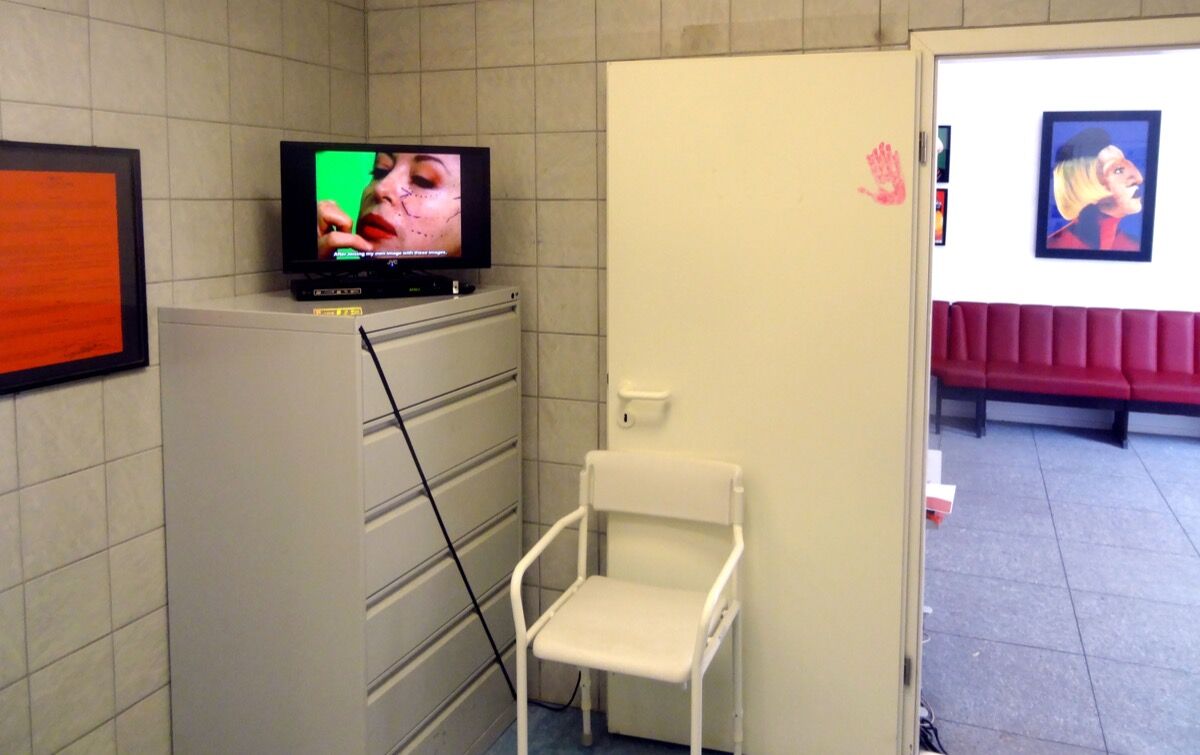 Advertisement
ORLAN is unwilling to be confined by the limits of pain, suffering, or even nature, and will obstinately work against them. If identity is constructed on the surface of a woman’s body, on the skin, ORLAN will peel it back to show us what lies beneath, or dramatically alter it so as to participate in the creation of her own identity.
In conversation, ORLAN uses the words “resculpt” and “reinvention” almost synonymously, which indicates her tendency to conflate identity with image. While we should be wary of internalizing society’s way of reducing identity to the visual, ORLAN’s work does feel strangely prescient.
Take the now-ubiquitous selfie. Derided—like much of ORLAN’s oeuvre—as narcissistic, the selfie is also commonly associated with women and non-binary sitters. Self-portraiture of any kind, of course, allows control of one’s own image. The selfie offers a means of negotiating and performing your identity. It circulates along social networks, in many cases normalizing historical markers of difference: thick body hair, dark skin, dimpled asses, and queer beauty abound.
The selfie shares with ORLAN’s work the idea that we are unstable, we are multitudes, and can be remade at any moment. It bears repeating that to trivialize work that orientates around the self—or worse, take it as a source of moral panic—is to miss the point. A woman’s body is political, and to take it back for yourself, to use it to perform new identities, can be an act of liberation. 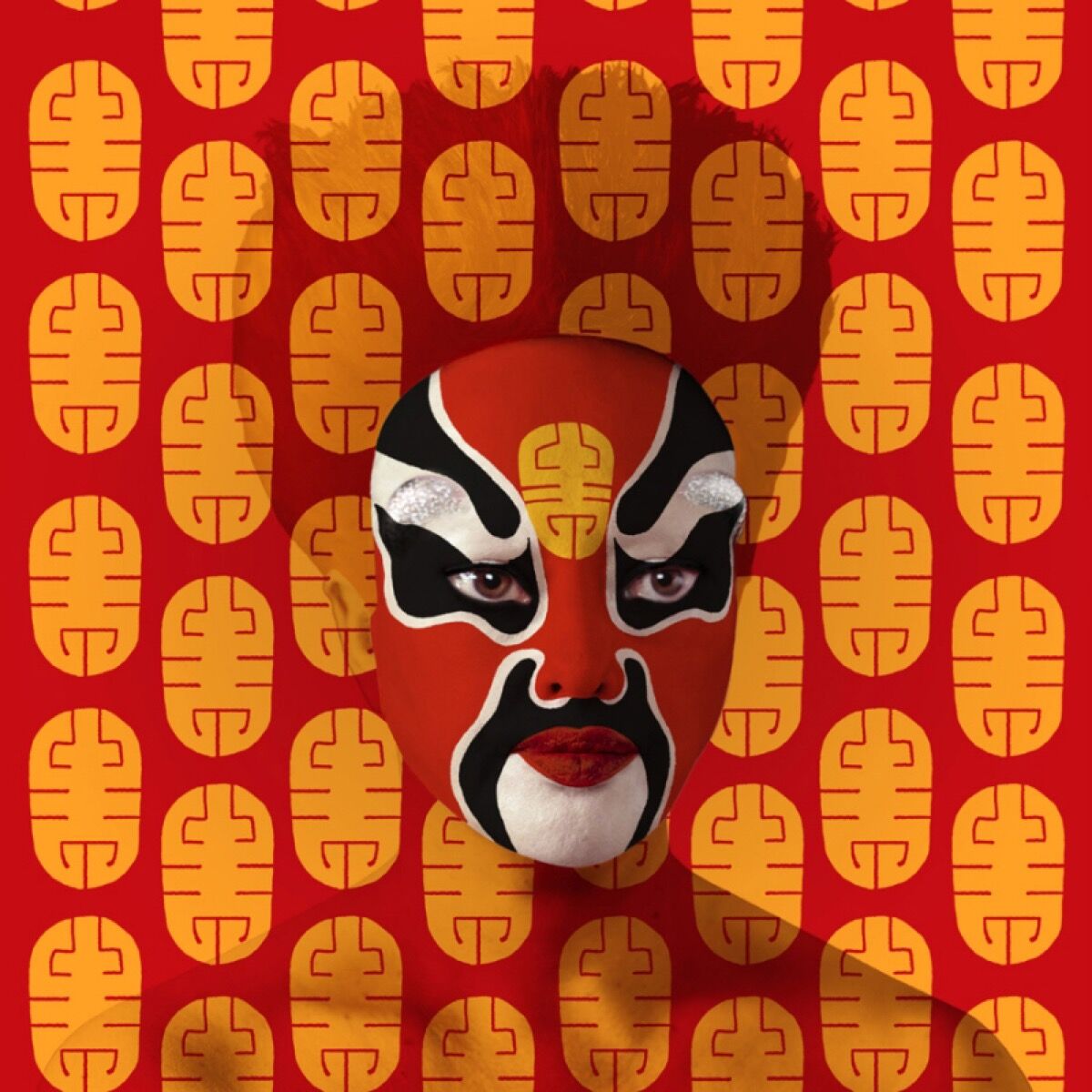 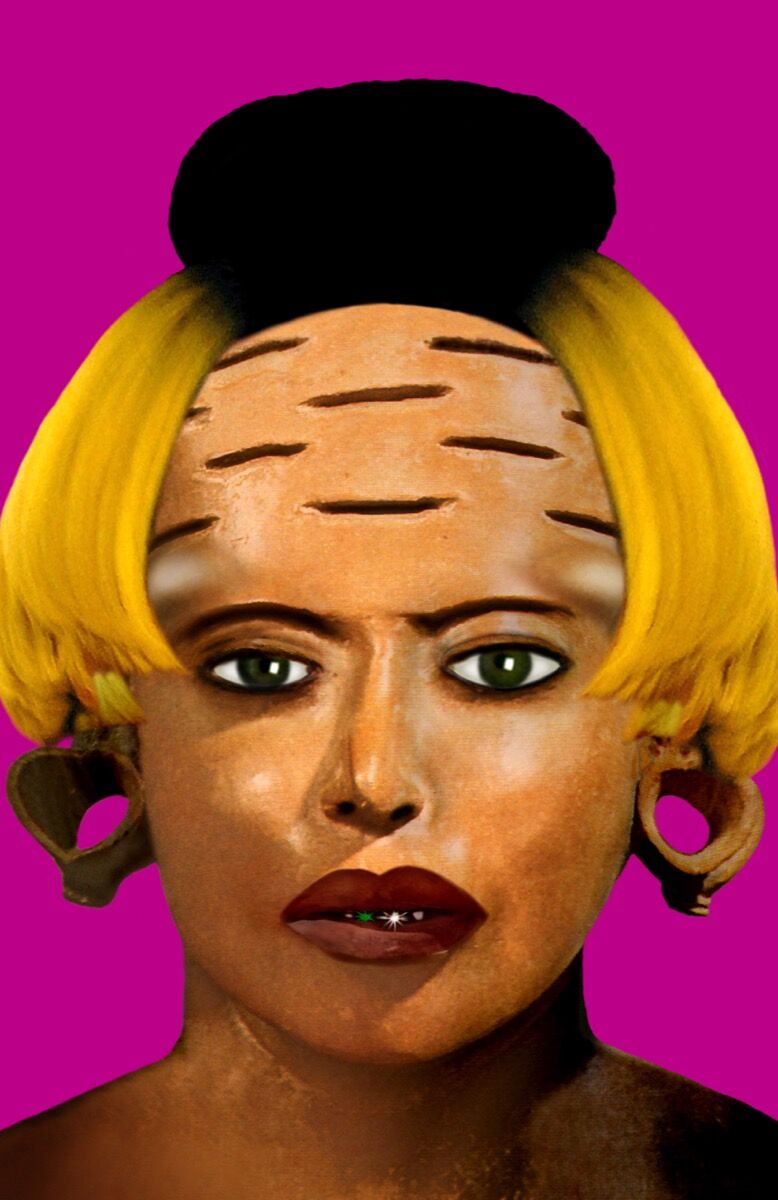 ORLAN recognizes that the body is a site for debate, and has devoted her life to that discourse. An advocate for difference, she is delighted with her work’s provocations. “I’m very proud when people approach me on the street to tell me that I’ve contributed to [these] questions,” she says. “It’s essential that artists take responsibility and play a role in our society. Art is not only for home decoration—we already have doilies, curtains, and furniture for that.”
When ORLAN’s work centers around herself, it’s strong. When she attempts to include “the other,” however, it fails spectacularly. Also on show at La Plaque Tournante are editioned prints and archival pieces from her “Self-Hybridizations” series, first created in the mid-1990s. Using digital augmentation techniques, ORLAN superimposed her own likeness onto that of others.
“I’ve invented a new image of myself with new, non-Western referents,” she says. “It’s a work of both re-figurement and disfigurement, a sfumato between presentation and representation.” The problem lies in these “non-Western referents”—the colonial ethnographic portraits of people nebulously defined as Africans, or
George Catlin
’s 19th-century paintings of indigenous Americans. 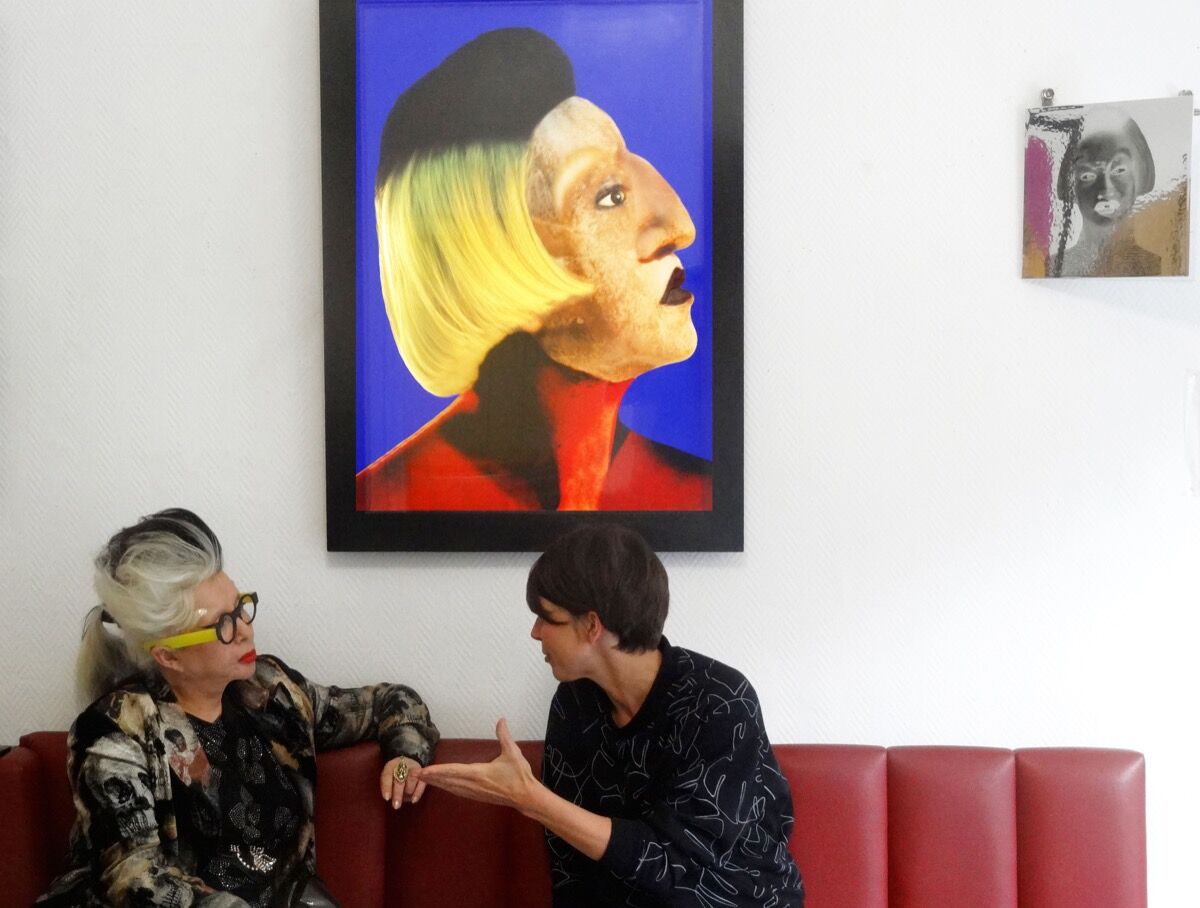 For ORLAN, the work is perhaps earnestly made, motivated by a desire to blur the borders between self and other. “It’s the idea of inviting the other within yourself,” she says, “by lowering your guard and accepting the other within.” She assumes that race is simply a matter of skin, rather than a complex set of power structures. It’s careless at best.
One particularly uncomfortable image shows ORLAN merged with an unknown black tribal woman, her lower lip stretched with a flat disk. Her nose has been widened, her skin darkened. This is, in short, a white woman in blackface. Thankfully, ORLAN has moved on from her “Self-Hybridizations,” and has since turned to microbiology.
Making use of her “cells, microbiota, [her] vaginal, buccal, and intestinal flora,” ORLAN told me, she is continuing to explore the relationship between self and other. It marks yet another shift in ORLAN’s heterogeneous career, and perhaps signals a move away from the visual as the primary marker of identity.
Whether or not you find ORLAN’s body of work repulsive, stimulating, or something between the two, it’s exhilarating to see someone continue to make themselves anew—and with such utter disregard for orthodoxy.
Siobhan Leddy
Related Stories