At 70, Playful Provocateur B. Wurtz Is Finally Having His Watershed Moment 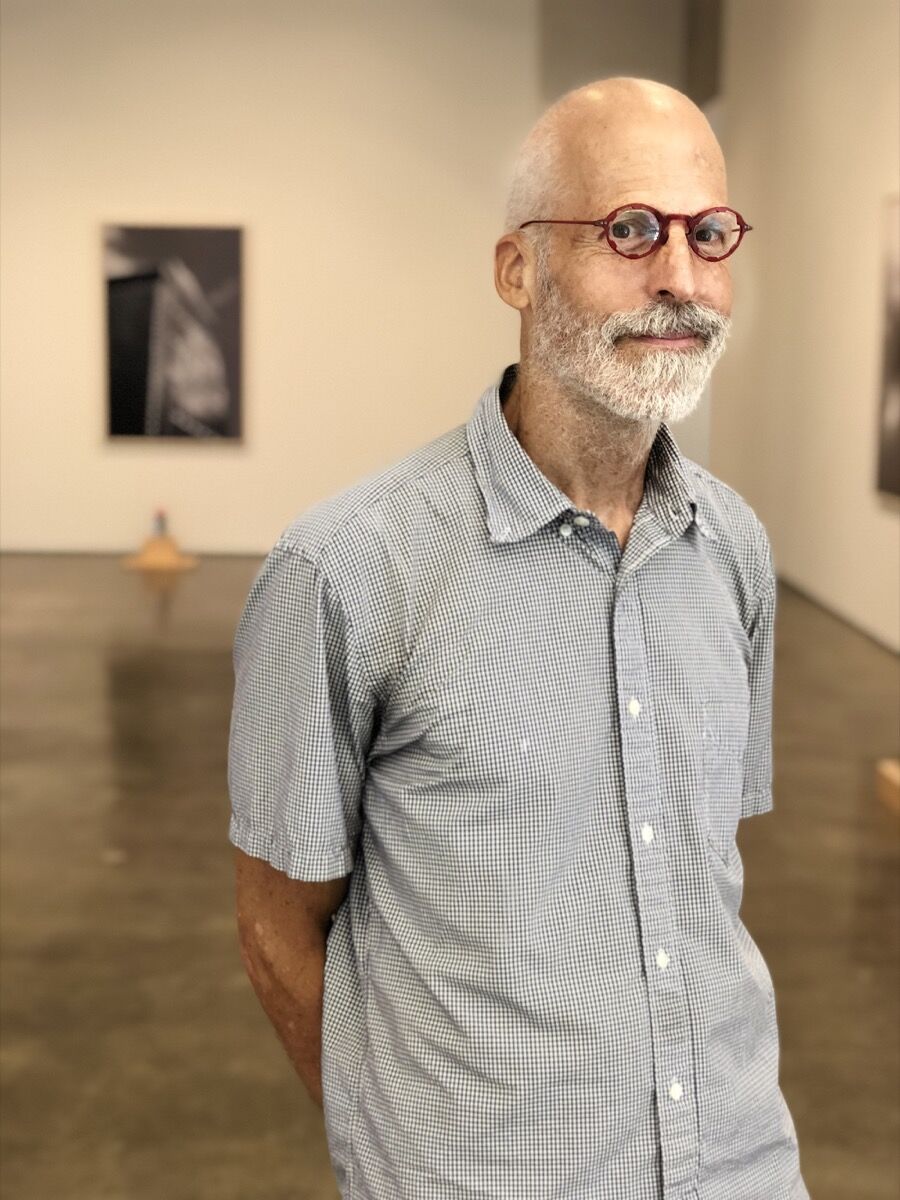 Portrait of B. Wurtz. Courtesy of Metro Pictures. 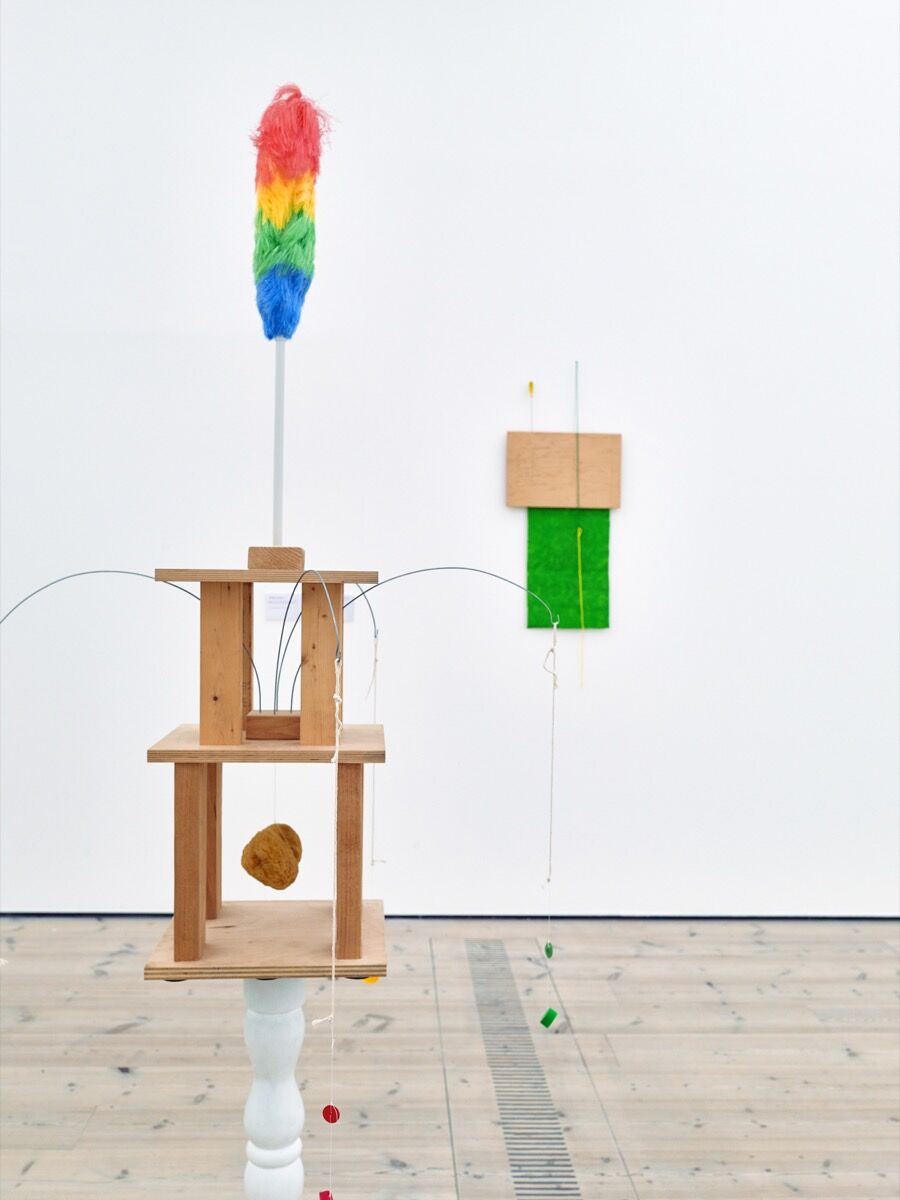 B. Wurtz
’s art is accessible—it’s buoyant and colorful, not given to the hoarding of deep secrets, and generally made of relatively cheap things like grocery store bags, buttons, and plastic lids. But that doesn’t mean his work is for everyone. It takes a certain perspective to value a sculpture whose proudest plumage is a rainbow-colored feather duster, and it takes a certain boldness to qualify such a thing as art in the first place.
“What can you put on a pedestal and call a sculpture?” he asked, rhetorically, when I went to visit him at his home on the Lower East Side of Manhattan. “Does it have to be cast bronze, or can it be something like that?” Wurtz motioned to a simple work in his third-floor studio space, in which a sock extends tumescently from a bare aluminum can. What is art, he wondered: “An oil painting of an important historical scene, or an
AbEx
work that now has its place in art history? Or is it just whatever I decide to put on the wall and say: ‘I know it relates to the history of painting and…well…take it or leave it?’” 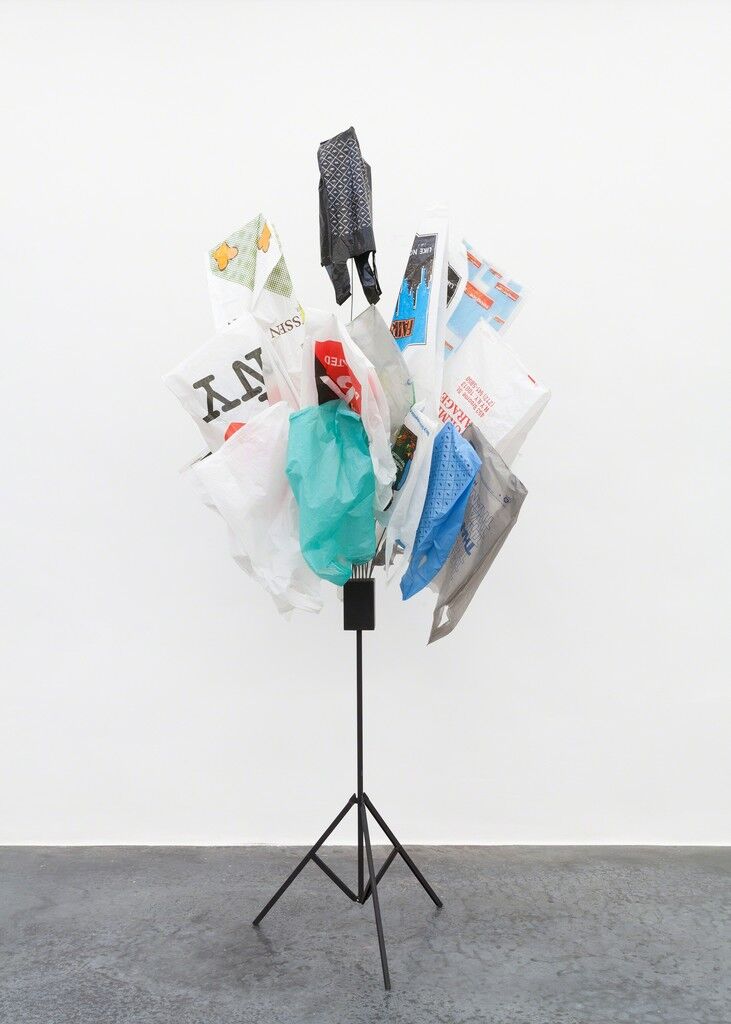 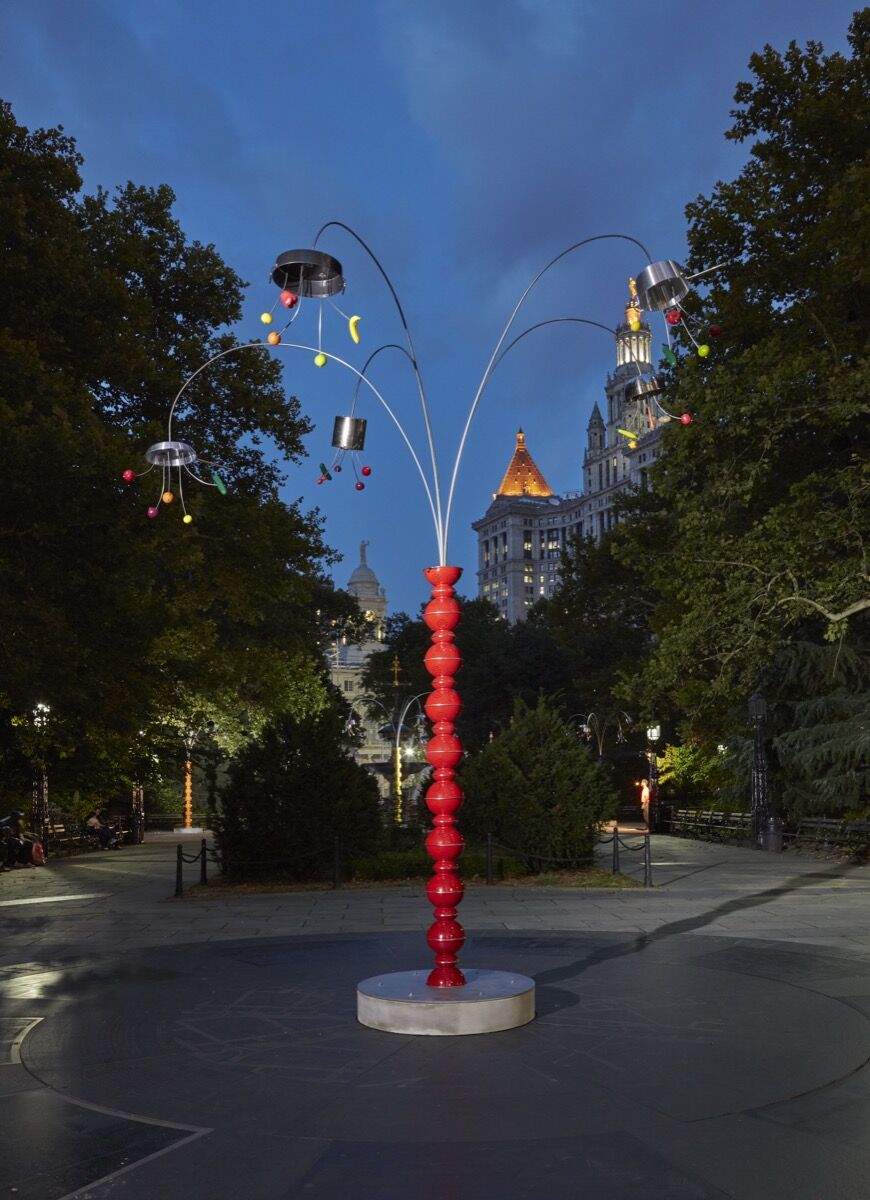 Wurtz—the B. stands for Bill—has, in person, an almost uncanny resonance with the work he’s made for the better part of four decades. Thin and lanky, with a white-grey beard and distinctly round, red eyeglasses, he could be mistaken for a particularly sympathetic Jungian psychologist. There’s a gentleness about his bearing that’s in keeping with the joyous, light touch of his sculpture, in which odds and ends are collected, mulled over, and then spun out into a delicate dance. Netting originally used to contain oranges becomes a lo-fi shade or chandelier; cups and shoelaces are imbued with a jazzy, kinetic energy.
Like many great artists, Wurtz possesses a passion for his chosen materials and objects that is contagious, even if their appeal is not obvious. His work encourages a slowing-down, an appreciation for the overlooked. “There are some amazing plastic bags,” Wurtz told me, with an enthusiasm greater than what one might expect. “Beautiful colors and interesting designs on them. But they’re also the most ordinary, ubiquitous things I could think of.” He might speak with the same admiration regarding the manufacturing stamps printed on a length of wood, or the retro design of supermarket flyers. Spend an hour in his company and you, too, will be appraising yogurt containers for their hidden aesthetic value.
Wurtz started making art in his home state of California where, after some time off post-college, he enrolled in the California Institute of the Arts (a.k.a.
CalArts
) almost by accident. As Wurtz tells the story, he went to tour the school at the age of 30, and brought along with him a small container of his modest works. Improbably, someone reviewed his sculptures while he was wandering the campus; he returned to find that he’d been accepted, despite having yet to apply. Such is life. Wurtz was excited to study with
John Baldessari
, whose The Pencil Story (1972–73) had thrilled him when he first saw it. The
conceptual
piece features two photographs: one of an unsharpened pencil, the other of the same pencil, sharpened. Underneath it runs a handwritten narrative that concludes: “I’m not sure, but I think that this has something to do with art.” 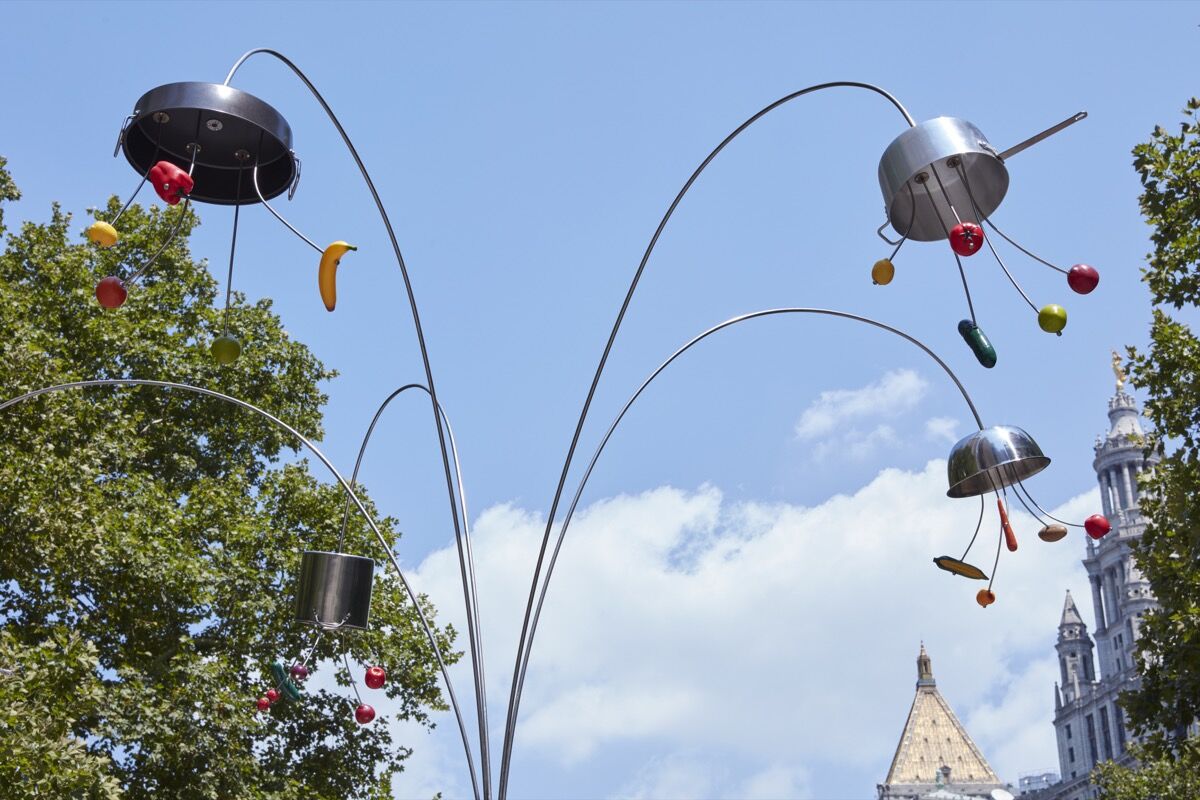 Advertisement
At CalArts, Wurtz was slightly allergic to the Marxist-heavy reading curriculum, but he was enamored with the seminar format, in which artworks were endlessly dissected. His teachers included
Douglas Huebler
and
Barbara Kruger
, among others, and now-established artists like
John Miller
,
Stephen Prina
, and
Tony Oursler
were his classmates. A course led by conceptual star
Michael Asher
was particularly fruitful, and deeply rooted in the nitty-gritty aspects of craft. “What we talked about, all day long, was: ‘Why did you make it out of that?’ ‘Why did you choose that color?’ Art is always visual, no matter how conceptual,” Wurtz said.
Early pieces found the artist putting common things to new uses: croquet balls, hula hoops, keys, little chunks of wood. He also made sculptures and drawings that expressed an almost fanboy appreciation for Baldessari’s winking style. For one work, Wurtz affixed a piece of styrofoam to a rectangle of cardboard, and wrote “I didn’t make this” beneath it. In another, he paired a moody photo of a staircase with an offbeat admonition: “Do not think of Led Zeppelin.” Not every idea was a winner. Wurtz recalled two unrealized concepts—stretching printed fabric and presenting it as a readymade painting; installing a working bird bath inside a gallery, without any birds around—that were perhaps best left unrealized.
Grad school didn’t reinvent the way Wurtz made art, but it did lead to some minor breakthroughs. He remembered a text-based piece he presented to his classmates: hand-drawn sentences that had been compiled by chance, via pointing blindly at various magazines and books, and then using the words that his finger fell upon. I’m not going to say how I made these was Wurtz’s attitude at the time. It’s a secret. His peers weren’t having it. “I learned a huge lesson,” the artist admitted. “It doesn’t have to be a secret—that’s silly. I had this idea that if you talked about art too much it would destroy it. That’s not true at all.” 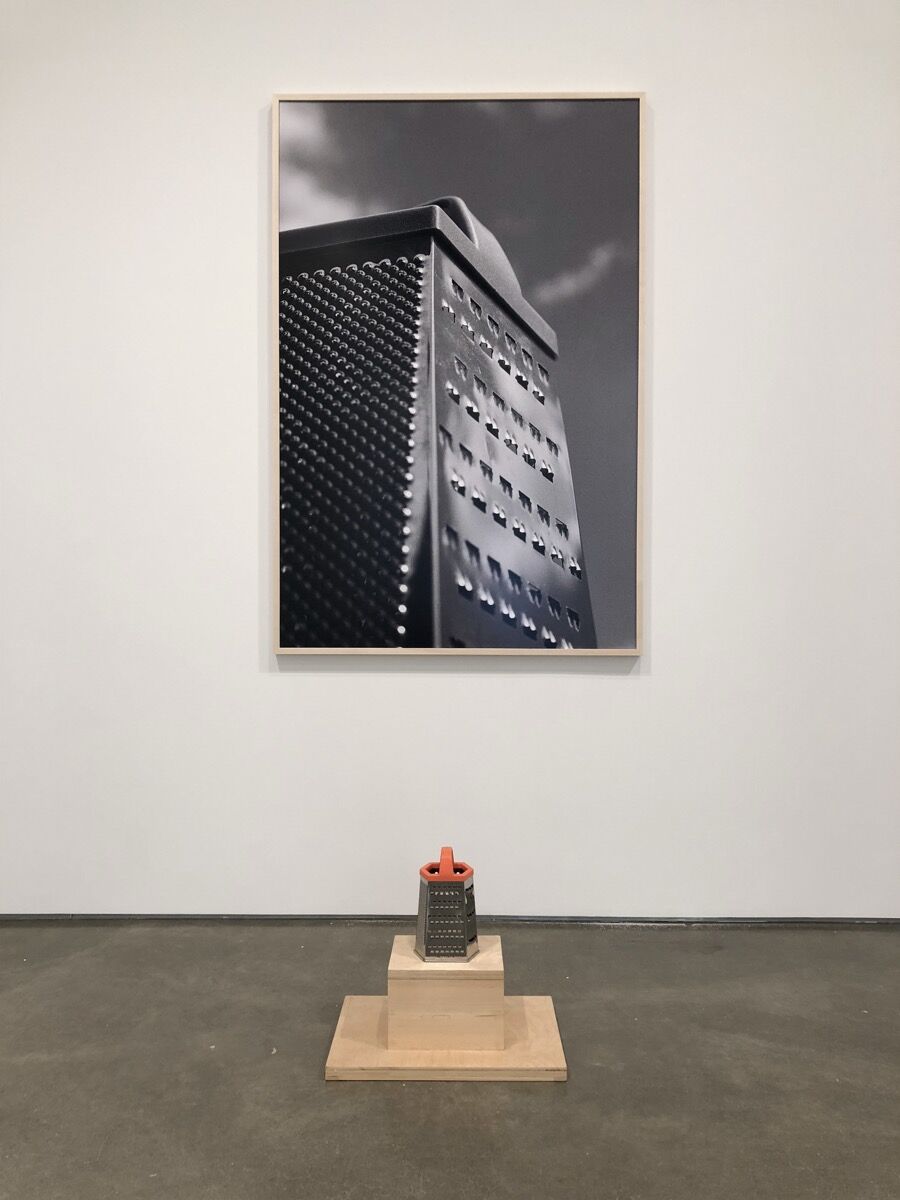 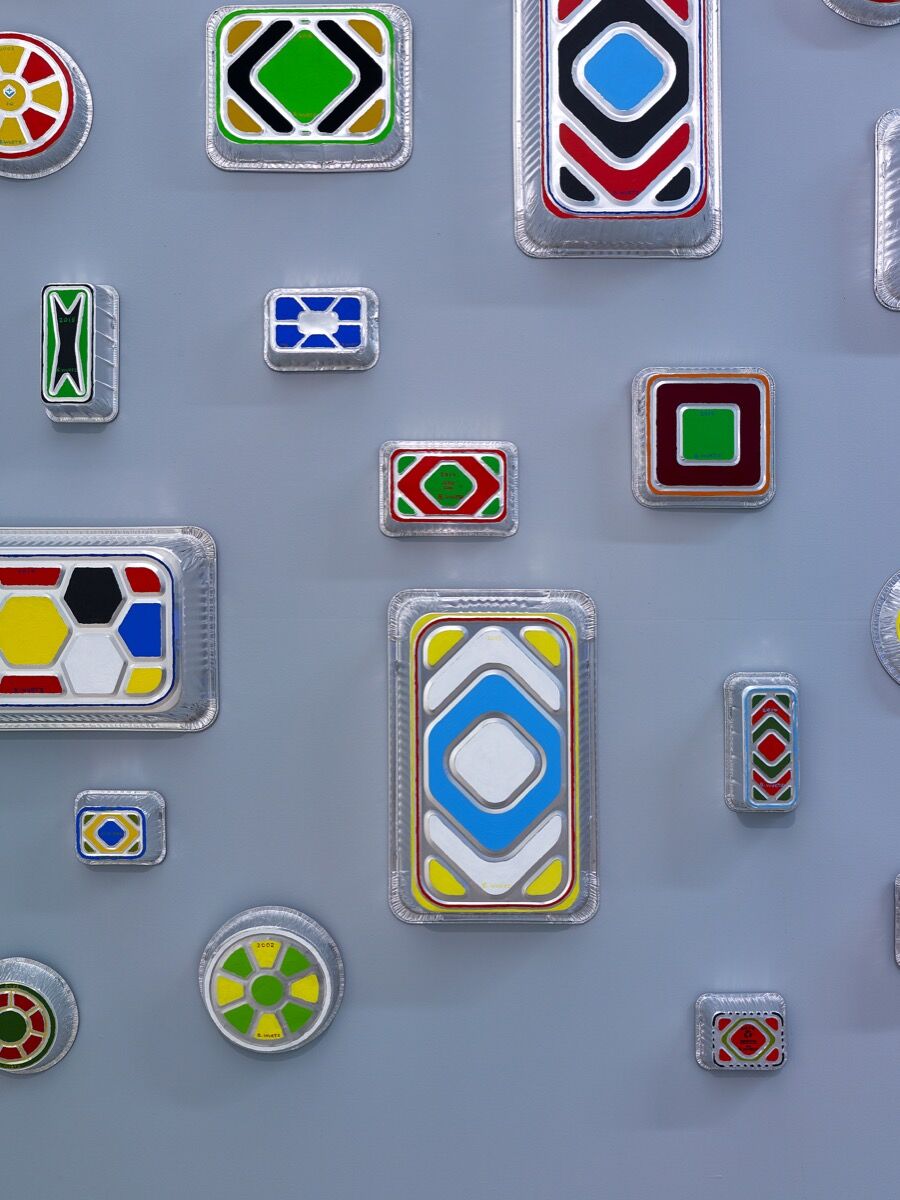 At CalArts, Wurtz met his wife, Ann Bobco—now a graphic designer—and the two settled in Hollywood. The artist felt out of step with the artistic tastes of the city. In 1985, the couple relocated to New York. Success came swiftly, with inclusion in “Six Sculptors,” a survey show at the critically influential Artists Space. That exhibition led to Wurtz’s first sales, as well as a phone call from the gallerist Hudson, who was interested in showing Wurtz at his Chicago-based gallery, Feature. (Feature would later open a location in New York, exhibiting Wurtz frequently through the mid-2000s. The dealer, a beloved art-world fixture, died in 2014.)
As his career got up to speed, Wurtz moonlighted at various jobs, including one that had him hand-assembling slides for corporate meetings in the days before PowerPoint. Cast-offs from that gig, including a trove of fashion slides, would later find their way into his sculpture. But mostly, it seems, he paid the rent and proceeded apace, hewing to the style that had always moved him—something between
Marcel Duchamp
and
Alexander Calder
. Much of his output fell within what Wurtz called his chosen “themes”: food, clothing, shelter. “There are endless found objects,” he said, “but these really ordinary things naturally go with the basics of survival—going to the grocery store, putting your socks on. By limiting it, I made freedom for myself.”
Now, in 2018, at the age of 70, Wurtz is more than surviving. This month alone is something of a watershed moment for the artist. First, there’s “Domestic Space,” an exhibition at Metro Pictures in New York, on view through October 20th. That show includes new sculptures, as well as a series from 1987 that pairs small objects—“electrical parts, lamp shades, kitchen things, cement fragments”—with photographs of the objects themselves. Wurtz angled and shot them in such a way that they have an imposing presence, akin to the water towers in the work of
Bernd and Hilla Becher
. 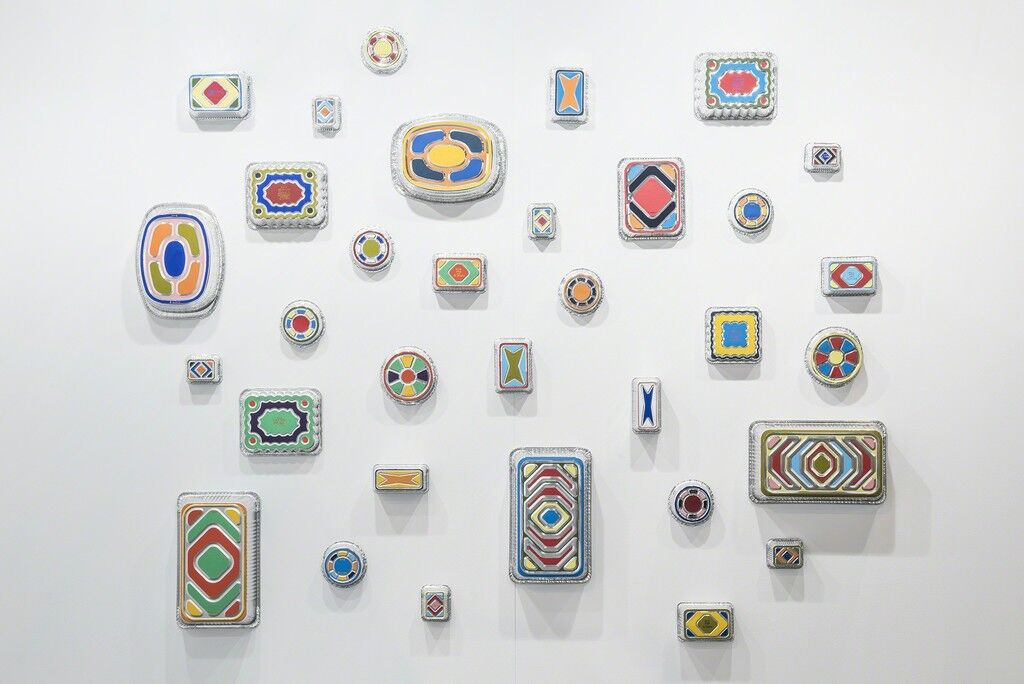 B. Wurtz
Pan Paintings, 2016
Maisterravalbuena
Then there’s “This Has No Name,” a museum survey opening at the Institute of Contemporary Art in Los Angeles on September 30th; and another concurrent solo show in L.A., at Richard Telles Fine Art, on view from September 22nd through November 3rd. Meanwhile, Kitchen Trees, the largest work Wurtz has ever made—a series of five “trees” composed of kitchen equipment and plastic fruits and vegetables, commissioned by Public Art Fund—is installed in Manhattan’s City Hall Park until December. That piece presented a unique opportunity for Wurtz to transpose his tinkerer-at-the-table aesthetic into epic dimensions, partnering with a foundry in Brooklyn to construct the roughly 17-foot-tall structures.
Mild and modest as he can be, Wurtz cherishes the wave of recognition. While he’s had faith in these ordinary things for a long time, everyone else may just be catching up. “I find it fascinating to think that they were invented by human beings,” he said, talking about the found objects he employs, though he might as well have been discussing his own finished sculptures. “How humans evolved in the world and came up with these ideas—that’s so much a part of them. That human inventiveness.”
I asked him what he thinks of the word “whimsical,” a loaded adjective that—along with “simple,” or “playful”—seems basically unavoidable when discussing his work. Does that make his sculpture appear light, trifling, insubstantial? “I like that it’s on that edge of, ‘Oh, let’s dismiss this work because it’s too whimsical,’” he explained. “Humor is a powerful thing. Play is a powerful thing. As an artist, when I’m sitting on the floor in the studio, I feel like I’m three years old again, playing. Human life—without humor or play or whimsy—would be intolerable.”
Scott Indrisek
Related Stories

The Artist Who Conjures Beauty from Refuse and Rust 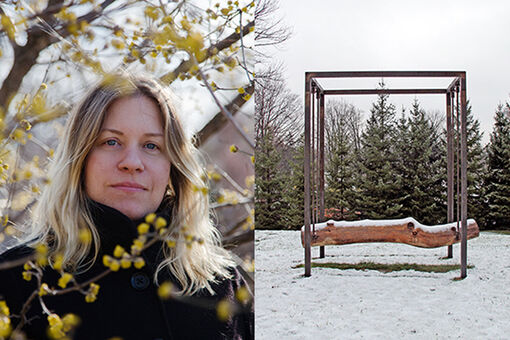 The Artist Who Conjures Beauty from Refuse and Rust
Scott Indrisek
Apr 19, 2018