8 Highlights from the Spring/Break Art Show

Scott Indrisek
Mar 6, 2018 7:12pm
Billed as a “curator-driven” event, organized annually by Ambre Kelly and Andrew Gori, the Spring/Break Art Show has never had much in common with the more commercially geared fairs unfolding during Armory Week in New York. Sure, most everything’s for sale—and V.I.P. hours on opening day let would-be collectors browse ahead of the masses—but the focus here is on experience, enjoyment, and no small amount of absurdity. In one room, a massive multimedia installation by the collective Fall On Your Sword includes a man dressed as Frankenstein’s monster riffing on the lyrics to the Pet Shop Boys’s song “West End Girls.” In another,
Alexander Reben
turns Google’s Deep Dream Generator on footage of Bob Ross’s Joy of Painting.
We braved the sprawling two-floor installation in Times Square to select some of the more intriguing, enlightening, or just plain odd presentations. 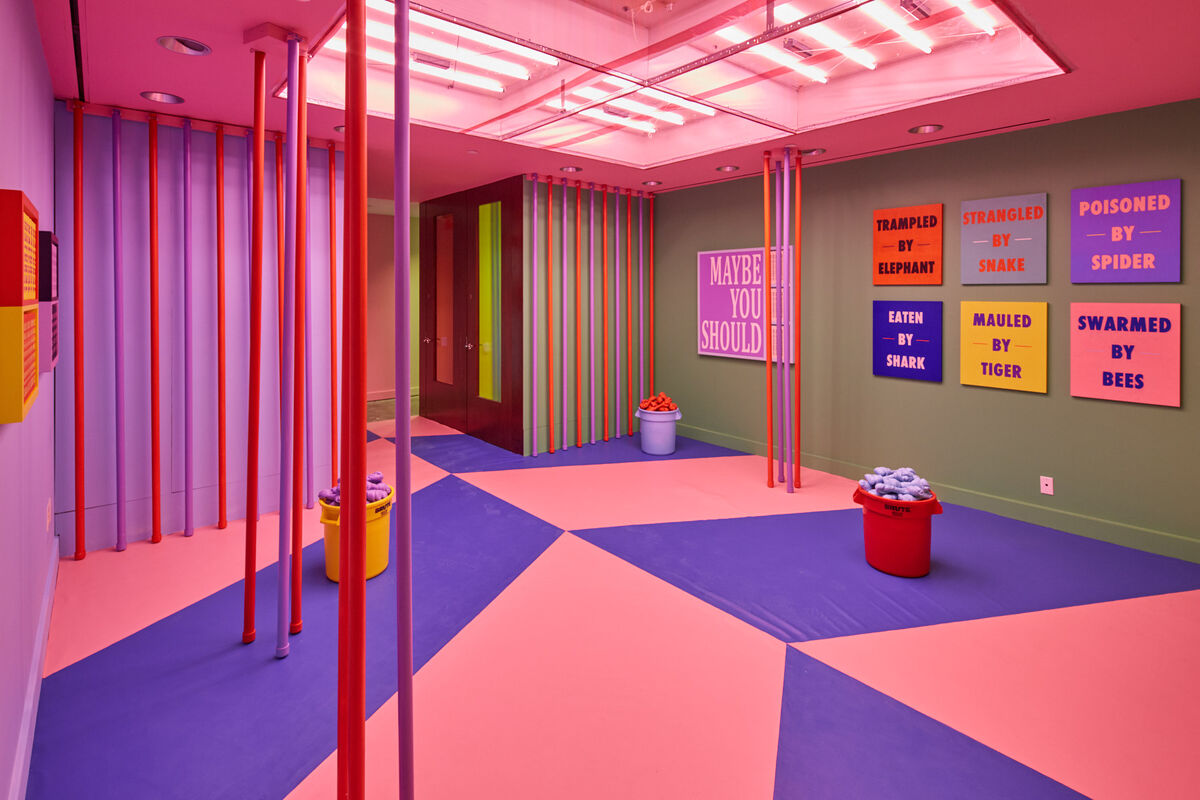 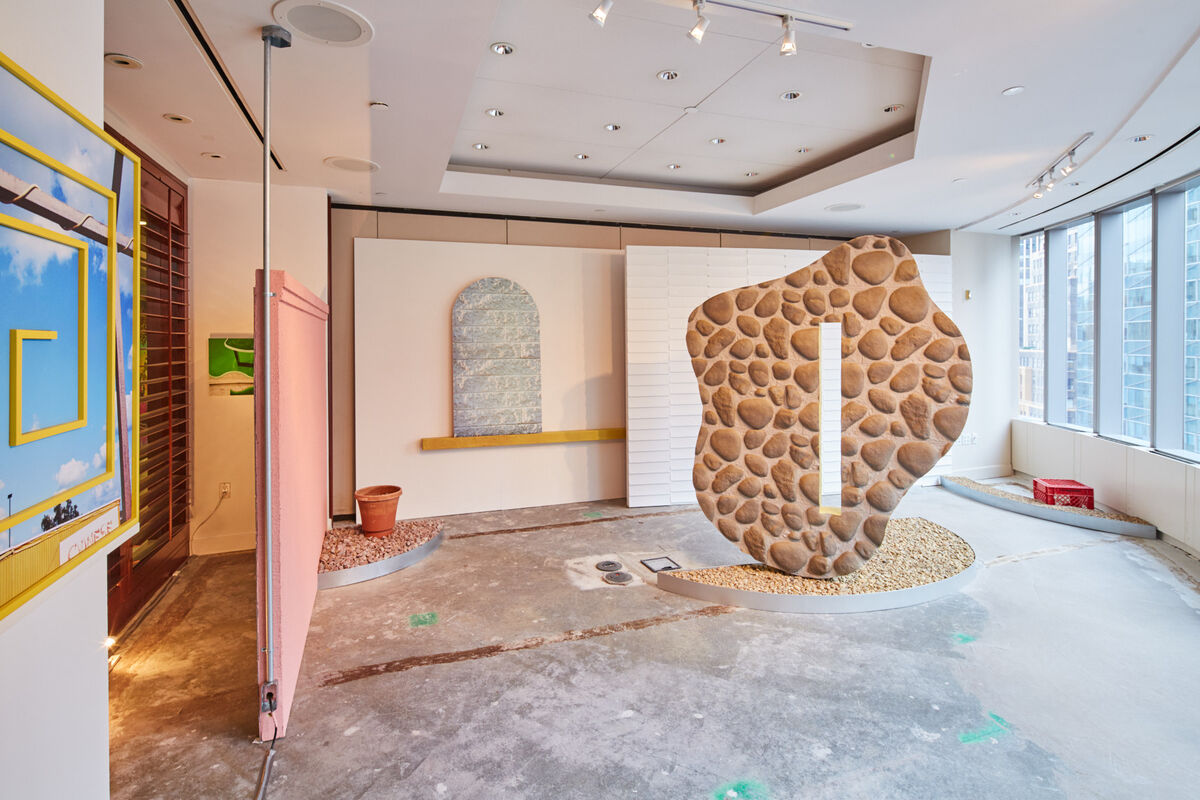 Advertisement
You might “think that all vinyl siding is created equal,” Darwent tells me, but his artistic mission is to “find the nuance” in the sort of mass-produced materials sold by Home Depot and its ilk. Fans of
Richard Artschwager
(or contemporary sculptor
Ethan Greenbaum
) will find a lot to celebrate in this installation, which squeezes real poetry out of fake rock walls, decorative pebbles, and other things more often used to beautify suburban landscaping. The dividing line between photography and sculpture is collapsed to great effect; one of the best pieces here reimagines an image of a textured brick wall as a sort of oversized headstone. Darwent’s deceptively mundane intervention is heightened by an expansive, curved window that peeks out onto Times Square, in all its neon madness. 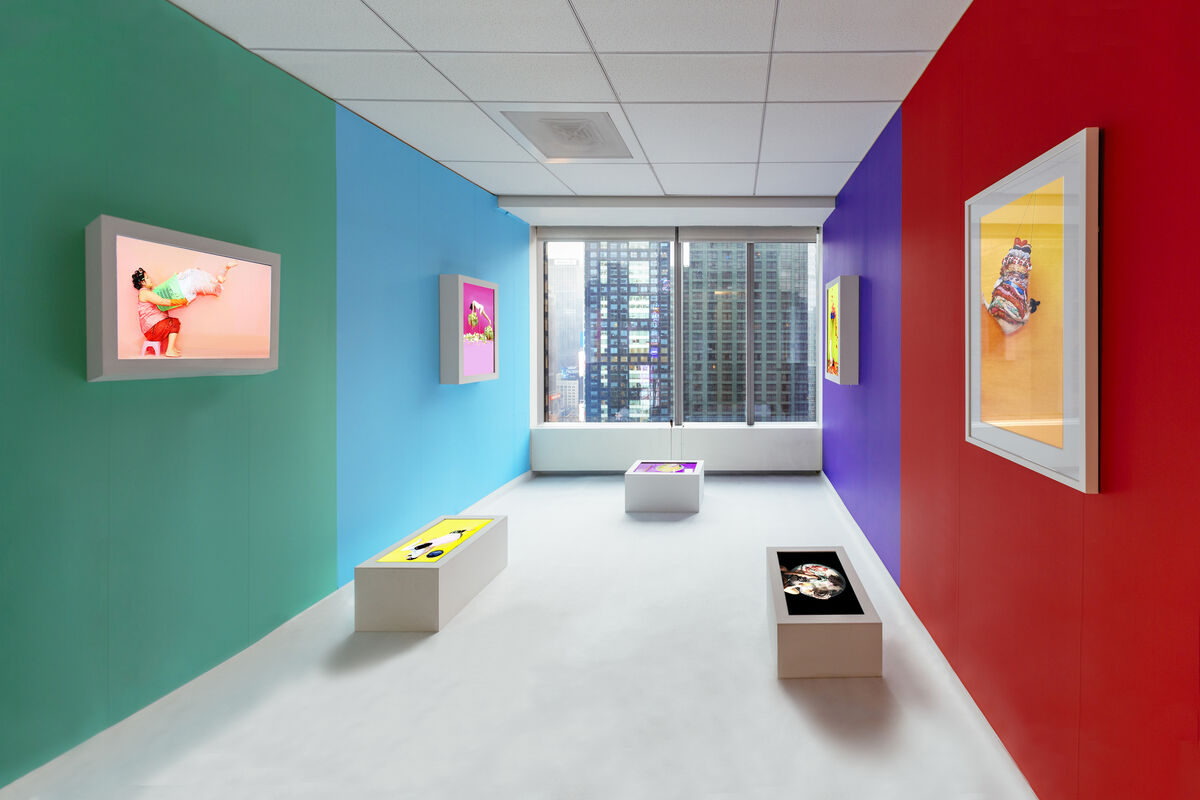 Installation view of Kawita Vatanajyankur, “Rituals of Otherness,” curated by Alexandra Fanning at Spring/Break, 2018. Photo by Johannes Berg. Courtesy of the curator.

The Thai-born artist Vatanajyankur owes an obvious debt to
Marina Abramović
and endurance performance in general. In a series of still photographs and looping videos (displayed more like animated paintings), we witness the artist putting herself through a series of grueling ordeals. The eye-popping color palette of the work puts a cheery gloss on some pretty disturbing actions. In one video, Vatanajyankur, wearing a bright yellow wig, dunks her head over and over again into a bucket of water, as if she were little more than a mop. Elsewhere, she’s dragged across the floor; balanced painfully on a beam (buckets of vegetables hanging from her arms and legs); or awkwardly supporting a crate into which someone is tossing chunks of watermelon. That latter work might sum up Vatanajyankur’s uniquely eclectic aesthetic: the grit of Abramović mingled with the slapstick physicality of
Mika Rottenberg
(or, perhaps, the sledgehammer-happy comedian Gallagher). 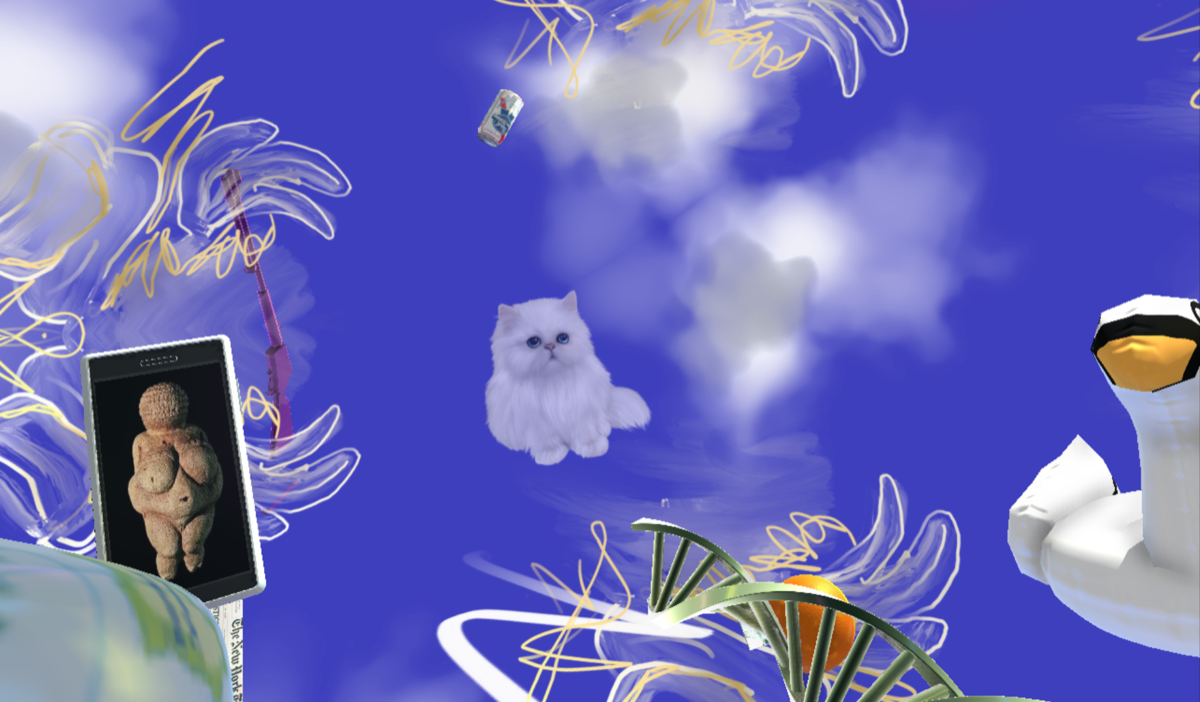 Two virtual reality-centric works are the highlight here. LaFarge Hamill’s exists in both virtual and real worlds. A large abstract painting hangs on the wall; when you put the VR headset on and walk toward it, its digitized composition suddenly breaks apart into a series of gestural squiggles and doodles floating in space. Kozak’s Pay Attention (2018) puts viewers adrift in the clouds, surrounded by the meandering detritus of contemporary culture: a wayward can of La Croix; an appropriated animation of the Venus of Willendorf, dancing; and, satisfyingly, the looped viral video clip of avowed white supremacist Richard Spencer being punched in the face. 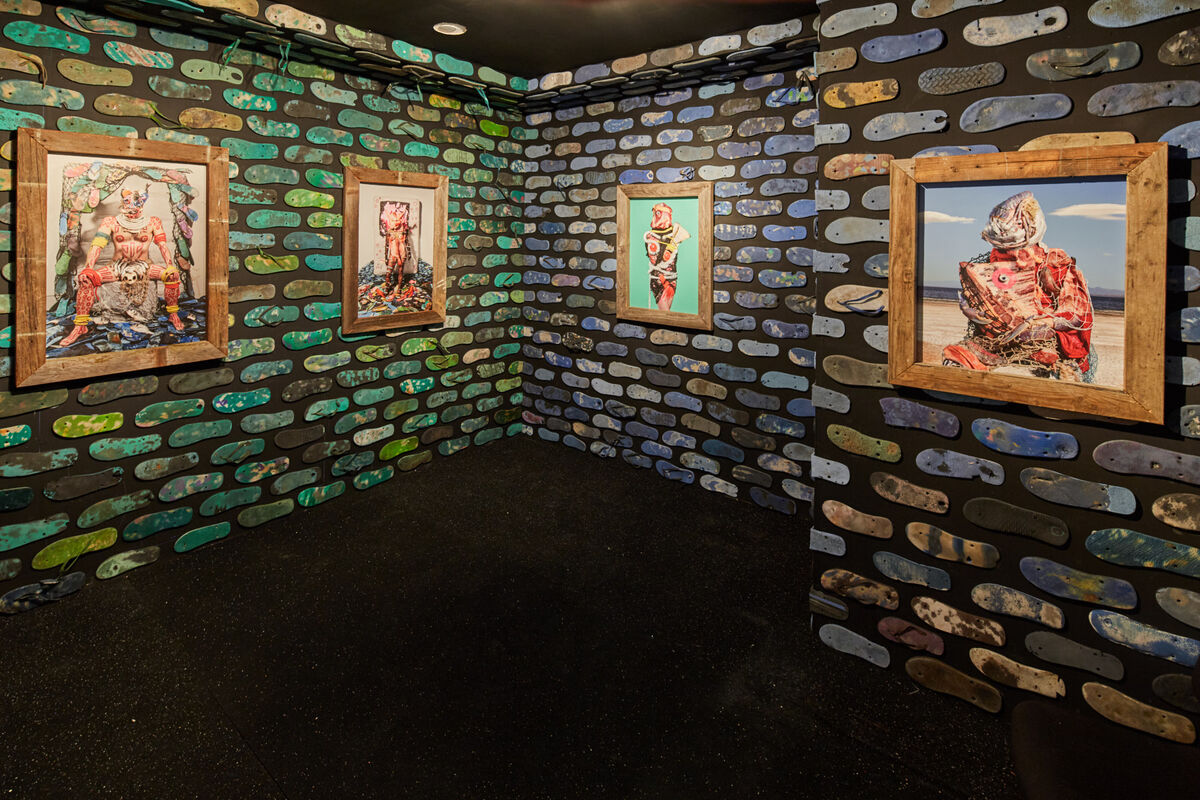 London-based artist Ostrer cut his artistic teeth as a set designer for the ballet, but ended up as a photographer known for portraits in which he covers himself and others in sweets, raw meat, and other edible ornaments. His installation at Spring/Break derives from a trip he took to Lagos, Nigeria, at the behest of curator Nwagbogu. Ostrer’s series of over-the-top portraits here—shot back in the U.K., and in the U.S.—are as flashily composed as commercial fashion images, which only underscores how wonderfully repulsive their subjects are. Each portrait is framed by raw, unlovely boards of wood, and the surrounding walls are gridded with an array of roughed-up flip-flops, which were salvaged from the beach in Lagos by Ostrer and a crew of locals he hired. 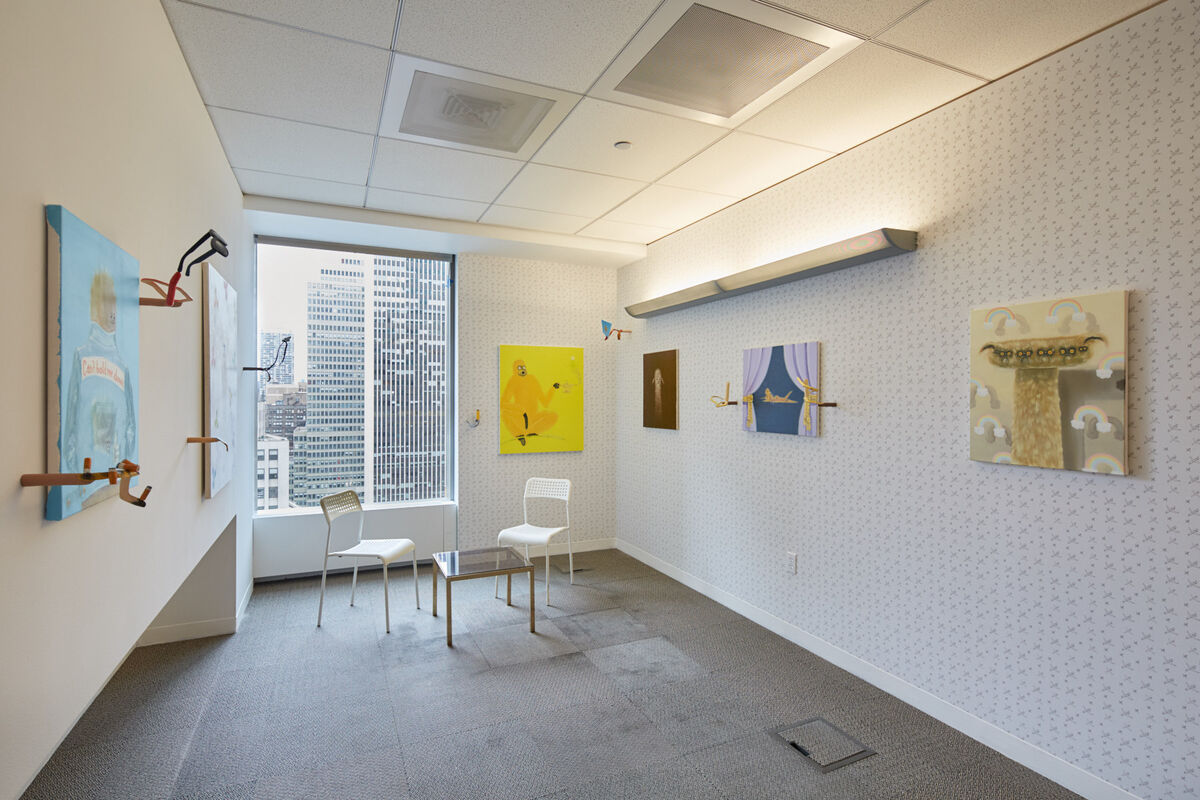 This smart and offbeat presentation pairs paintings by Ford with wooden sculptures by Greenwald, set against a handsome wallpaper (designed by Ford) depicting an endless array of airplanes mid-nosedive. An alpaca with an underbite gazes handsomely out from one canvas, while, nearby, a yellow monkey rubs a genie’s lamp, and sculptures of fingers with grotesquely elongated nails jut from the walls, bearing candlesticks or dirty cigarette butts. Greenwald says that he first saw Ford’s work at The Hole in New York and was taken by the “loving vibrations” of the artist’s paintings. Spend some time in this booth and you can’t help but get attuned to that same frequency. 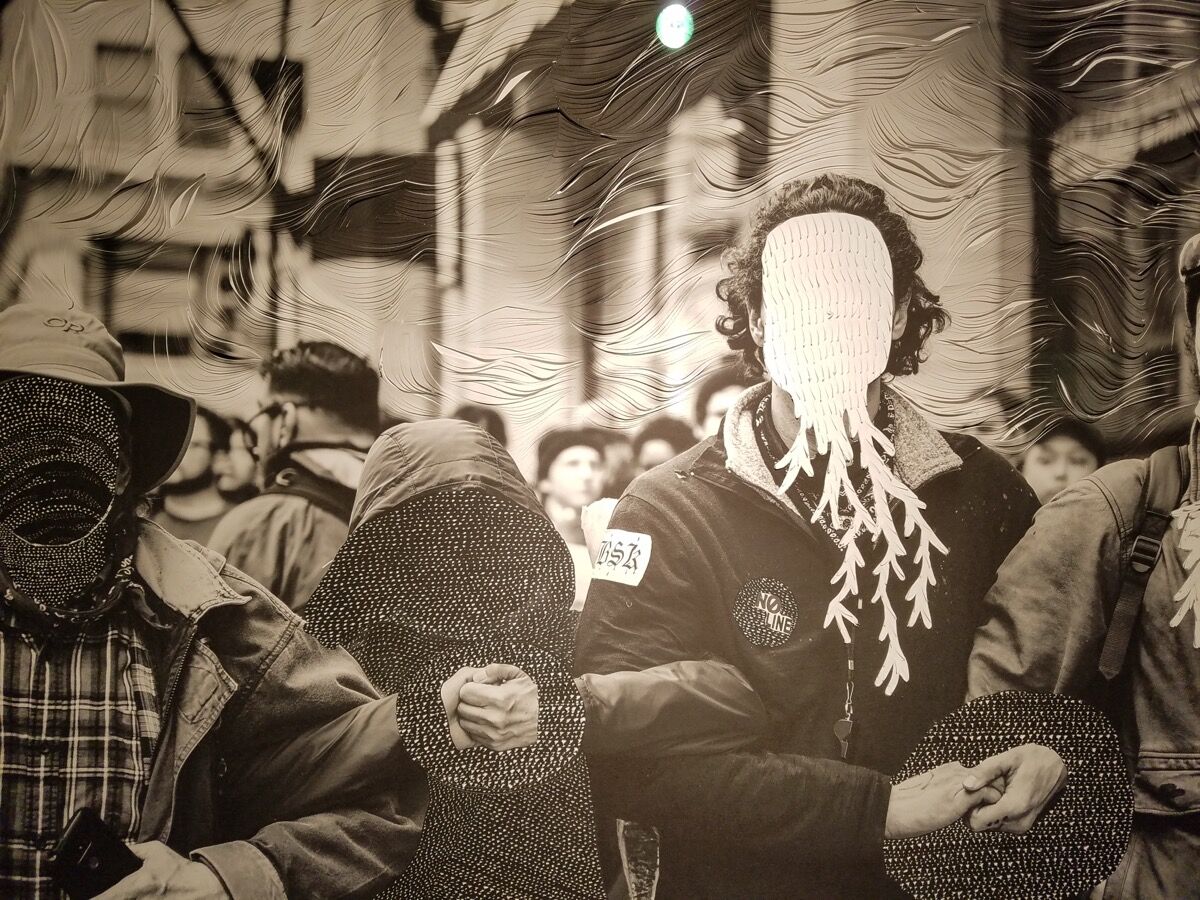 Working with photographs of contemporary political protests, Lewis prints his images on paper, which he then scuffs, abrades, and otherwise ornaments. Anonymous men marching with placards have their faces obscured by rich, meshed patterns that recall
Yayoi Kusama
’s “Infinity Net” paintings. The effect, reminiscent of embroidery, is both delicate and violent. Lewis points to his previous vocation as a critical care nurse, which he says gave a sense of “intentional empathy” that carries over into his handling of these prints.

Antonia Wright
, “If I Had To Perish Twice,” curated by Maureen Sullivan and John Zinonos 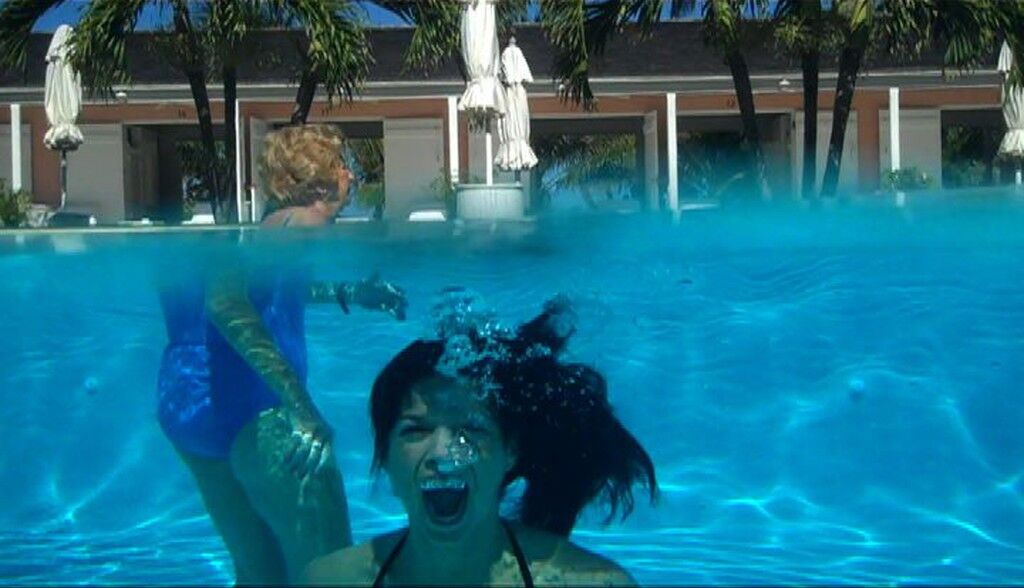 Antonia Wright
I Scream, Therefore I Exist, 2011
Spinello Projects
“Marina Abramović, with humor,” I heard co-curator Sullivan say, concisely describing the energy of Wright’s work. In one video on view from 2016, we see the young artist wearing an elaborate costume meant to evoke flames; she’s walking on the frozen surface of Lake Champlain in Vermont. She slowly approaches the camera before unexpectedly collapsing and sinking through a hole in the ice, intentionally re-performing a similar accident that befell her when she was a teenager. (This time around, a support team, not visible on camera, was on hand to prevent an actual tragedy.) The two-channel work I Scream, Therefore I Exist (2011), shot in swimming pools in Florida and the Bahamas, finds the camera bobbing above and under the water. Submerged, we watch Wright, surrounded by various senior citizens who aren’t aware they’re being filmed, as she yells her heart out underwater. That passionate, silent shout, the curators suggest, might resonate with how some Americans feel in the current political environment.
Scott Indrisek
Related Stories