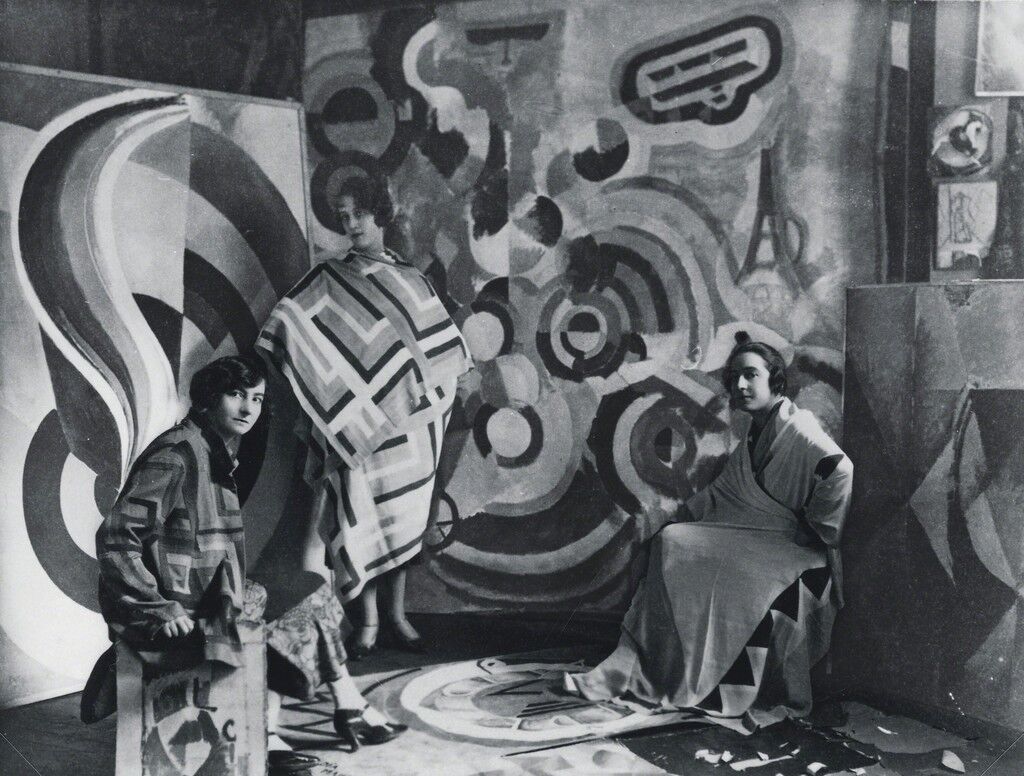 Often overshadowed in art history by her husband
Robert
, the Ukrainian artist
Sonia Delaunay
played many roles in her versatile career. Trained early on in drawing and painting, the ambitious Delaunay was not content to limit her creativity, giving her attention equally to the applied arts and fine art. She filled all areas of her life with art and was herself a sort of living tableau. Skillfully building and marketing her brand in an otherwise male-dominated era, Delaunay emerged as an influential tastemaker and bastion of Modernism. With her retrospective exhibition closing this week at London’s Tate Modern, it’s time to get acquainted with this key figure’s life and career.

Delaunay was a prominent early Modernist, alongside Picasso, Derain, and Braque.

Born in Ukraine, Delaunay studied first in Germany before moving to Paris in 1905, where she soon met collector and art dealer Wilhelm Uhde, her first husband. Uhde gave her her first solo show at his gallery and introduced her to Paris’s painting elite; it was not long before she encountered
Robert Delaunay
, whom she married in 1910. Alongside Robert, Delaunay explored her fascination with color and form, taking cues from
Fauvism
,
Post-Impressionism
, and
Cubism
. The two painters dubbed their new particular style Simultanism (though the poet Apollinaire categorized their work as
Orphist
). 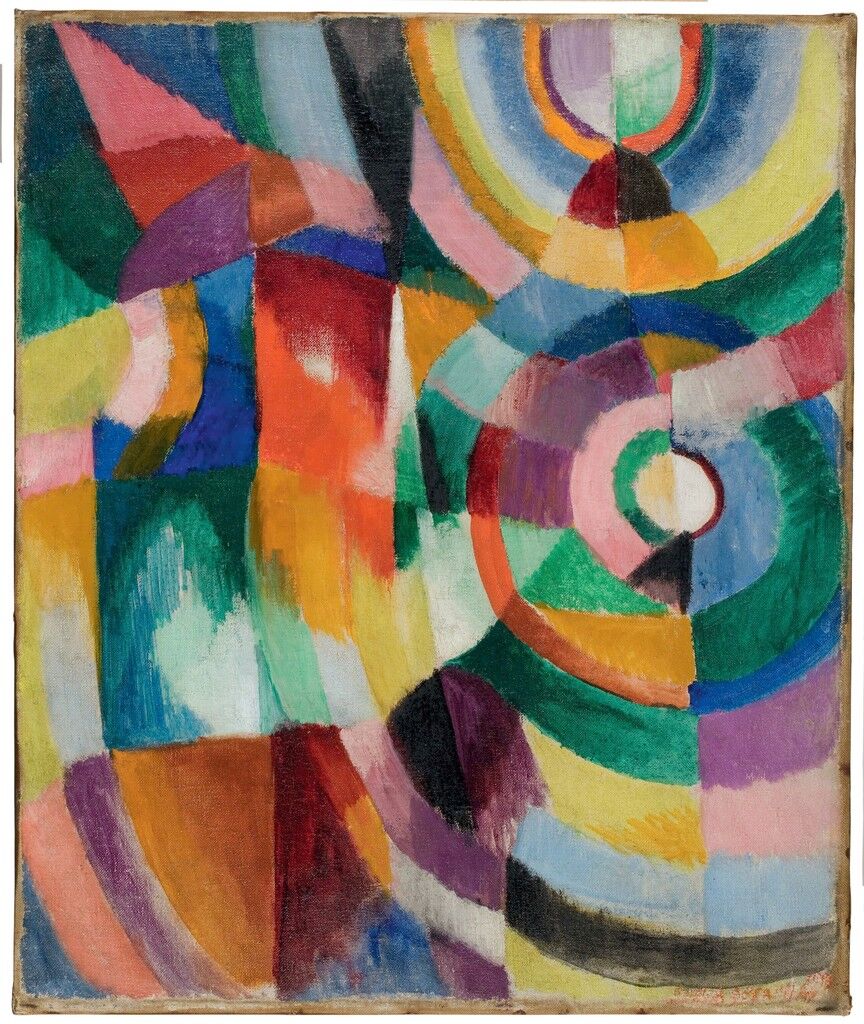 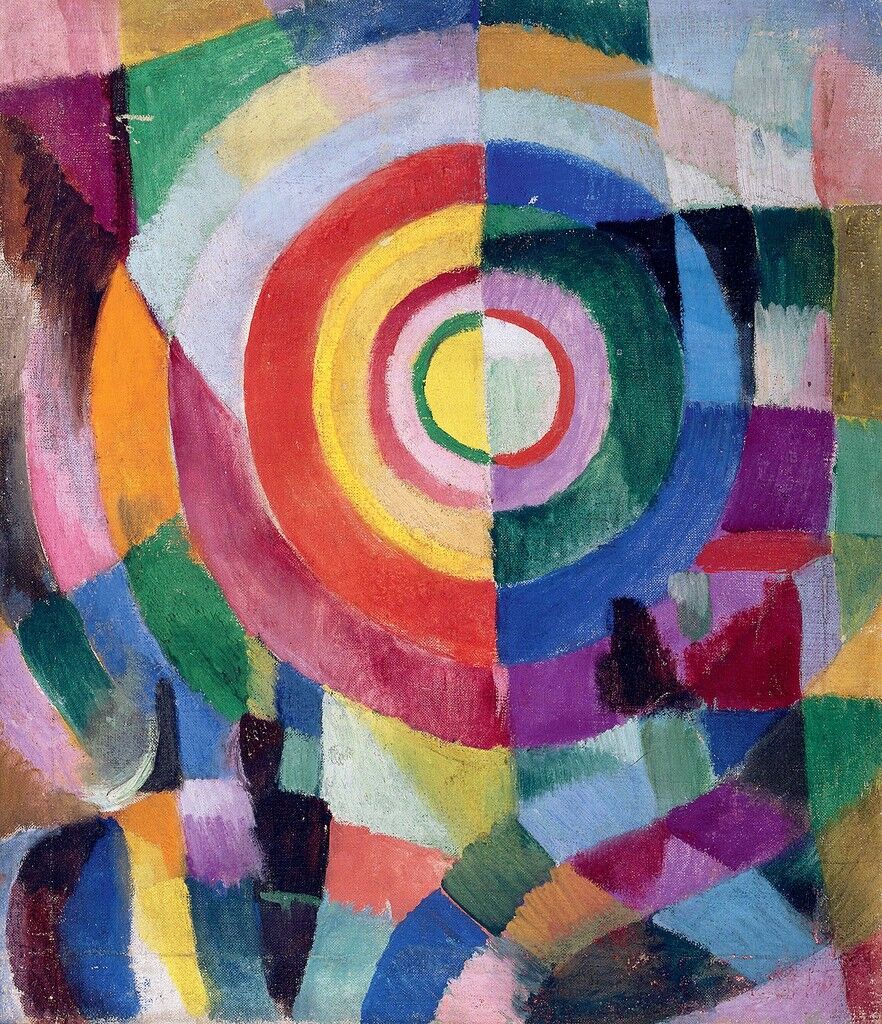 Delaunay experimented with abstraction in the applied arts and built a successful business around her designs.

Delving into painting furniture, designing geometric book bindings, quilting, and more, Delaunay began to look for other forms of expression early in her career, and found her groove in design. During the first world war, the Delaunays lived briefly in Madrid, where Sonia opened her first shop, Casa Sonia, in 1918. Her business soon expanded, with storefronts in Barcelona, Bilbao, and San Sebastian. Maison Delaunay followed, opening its doors to Paris in 1925. Delaunay was designing and selling clothing, as well as working as an interior designer, revamping private homes and other spaces, including the nightclub Le Petit Casino.

Aside from her business, Delaunay collaborated on costume designs for the ballet, theater, and film.

Gaining traction as a designer, Delaunay was invited to create costumes for the Ballet Russes, opera productions in Spain, the play Coeur à gaz (written by friend and collaborator Tristan Tzara), and the films Vertige and Le P’tit Parigot. Her designs were colorful, bold, geometric—and thoroughly modern. 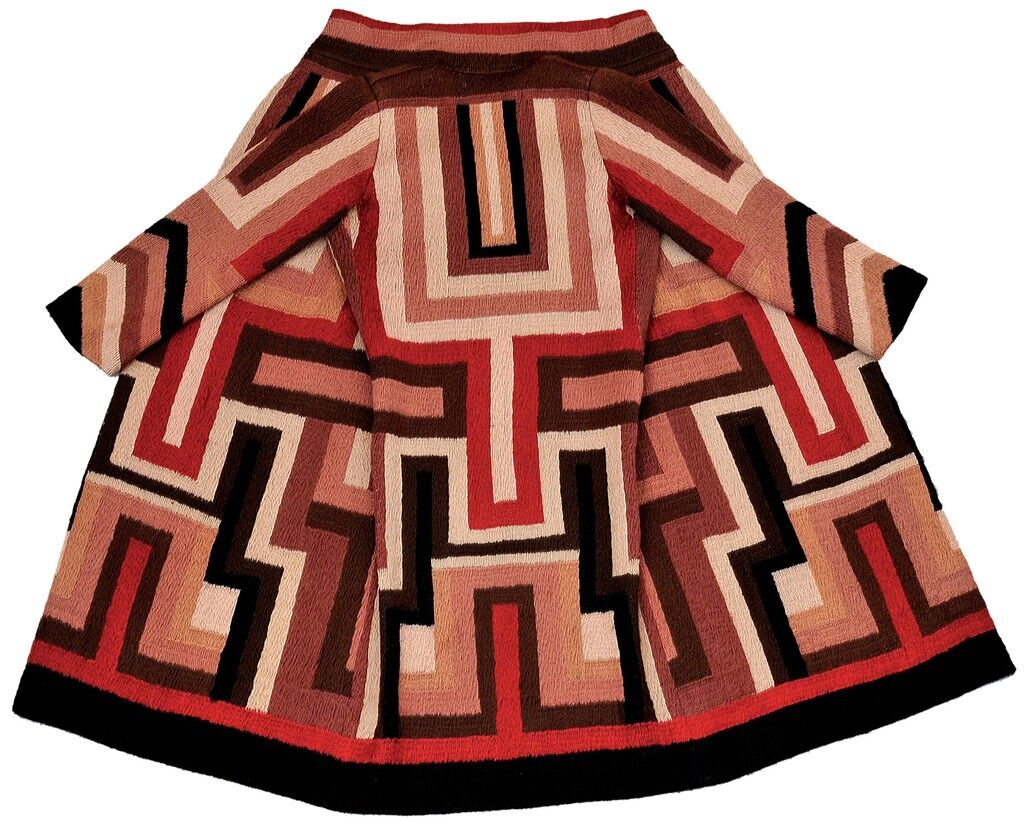 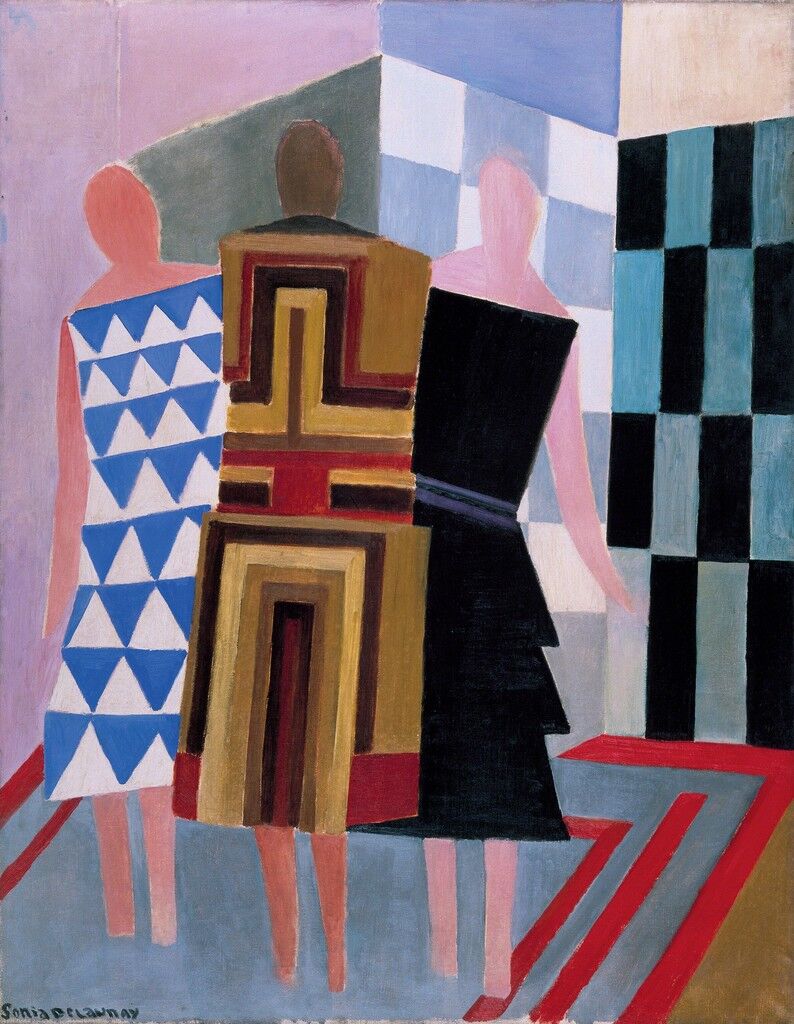 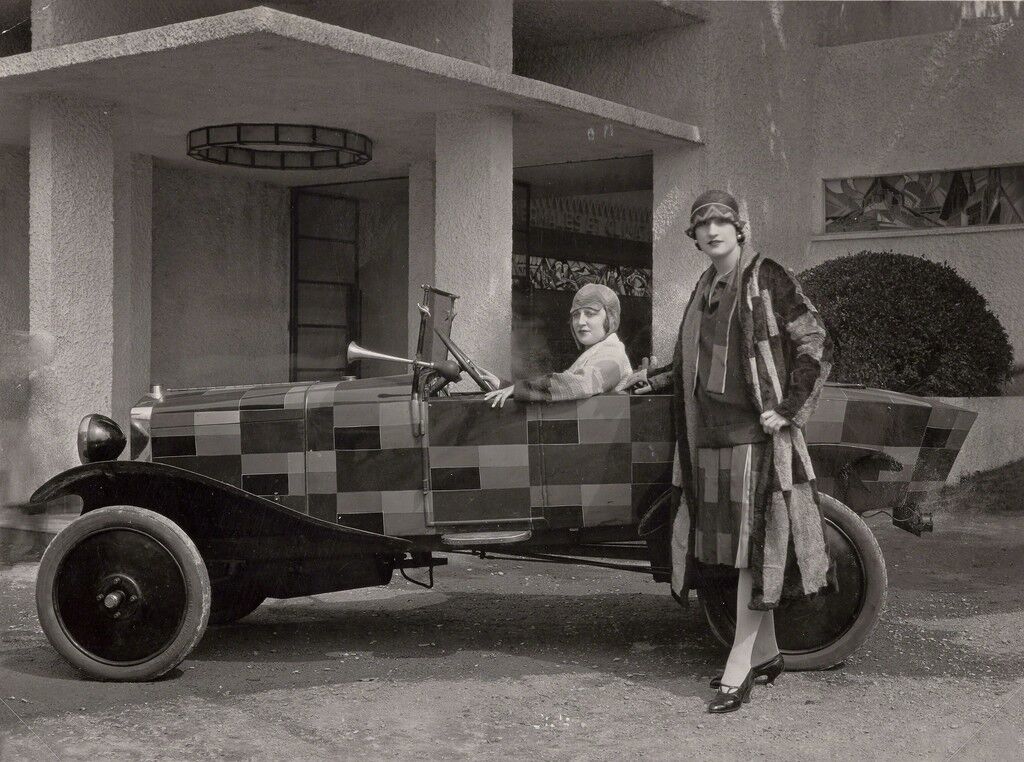 Two models wearing fur coats designed by Sonia Delaunay and manufactured by Heim, with the car belonging to the journalist Kaplan and painted after one of Sonia Delaunay’s fabrics, in front of the Pavillon du Tourisme designed by Mallet-Stevens, International Exposition of Modern Industrial and Decorative Arts, Paris 1925. Bibliothèque nationale de France, Paris. Courtesy Tate Modern.

Her textiles and fashions were distributed worldwide in department stores and boutiques, promoting her to a place of prominence in the fashion world.

Beyond her own shops, Delaunay’s designs were distributed at Metz & Co. in Amsterdam (which collaborated with her on designs) and at Liberty in London, as well as a series of department stores in New York. In 1927, Delaunay was invited to speak at the Sorbonne, where she presented her lecture “The Influence of Painting on the Art of Clothes,” in which she discussed the revolutionary idea of prêt-à-porter fashion, among other things.

In the heart of Saint-Germain-des-Prés, where all sorts of notable 20th-century expat artistes settled, the Delaunays’ home was open to artists, writers, and musicians—prominent and undiscovered—to come and share ideas on Thursday evenings. The writers and poets Tristan Tzara, Philippe Soupault, André Breton, Louis Aragon, and René Crevel were regulars. Delaunay herself had a special relationship to writing, collaborating early on with poet Blaise Cendrars on the volume La Prose du transsibérien et de la petite Jehanne de France; later she would work with Rimbaud, Apollinaire, Mallarme, and others, saying “Painting is a form of poetry, colors are words, their relations rhythms, the completed painting a completed poem.”

The French government commissioned designs from Delaunay for the 1937 International Exposition of Art and Technology in Modern Life.

She created large murals for the Pavillon des Chemins de Fer and the Palais de l’Air, bright abstracted blends of technical parts—gears, propellers, blueprint-like sketches—that lined the temporary exhibition halls. The Exposition was the sixth international fair France hosted, devoted to showcasing the latest advancements in science and technology—with a special emphasis on the union of art and technical creation. (Other pavilions featured work by
Fernand Léger
and
Raoul Dufy
, and, perhaps most notably,
Picasso
’s politically charged Guernica was shown for the first time in the Spanish pavilion).

Delaunay’s painting career regained momentum in the 1950s, with a rash of solo shows popping up in France and beyond.

Following her husband’s untimely death in 1941, Delaunay was dedicated to preserving his legacy, but eventually returned to creating and exhibiting her own painting. A solo show at Galerie Bing in 1951 garnered renewed attention, followed by inclusion in group shows at the Musée National d’Art Moderne and Galerie Suzanne Michel. Four years later she had her first solo show in the U.S. at New York’s Rose Fried Gallery, followed a few years later by a large exhibition at the Städtisches Kunsthaus in Bielefeld, Germany. 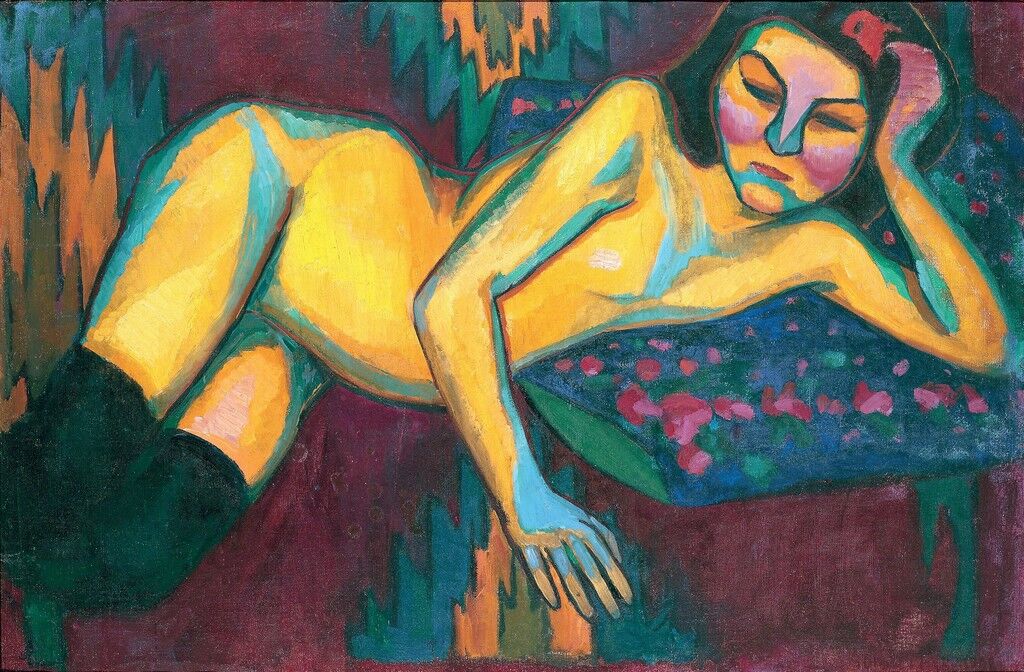 She was the first living woman to have a retrospective at the Louvre.

Mounted in 1964, nearly six decades into a prolific career, Delaunay’s Louvre exhibition was ground-breaking for its time. Questioned about how her gender may have affected her thinking and work over the years, however, she has said, “I never thought of myself as a woman in any conscious way. I’m an artist.” Delaunay continued to receive wide recognition as her career wound down, with another retrospective at the Musée National d’Art Moderne in 1967, before finally being named to the Légion d’honneur in 1975, just four years before her death at the age of 93.
Kate Haveles