8 Things Every Creative Should Know 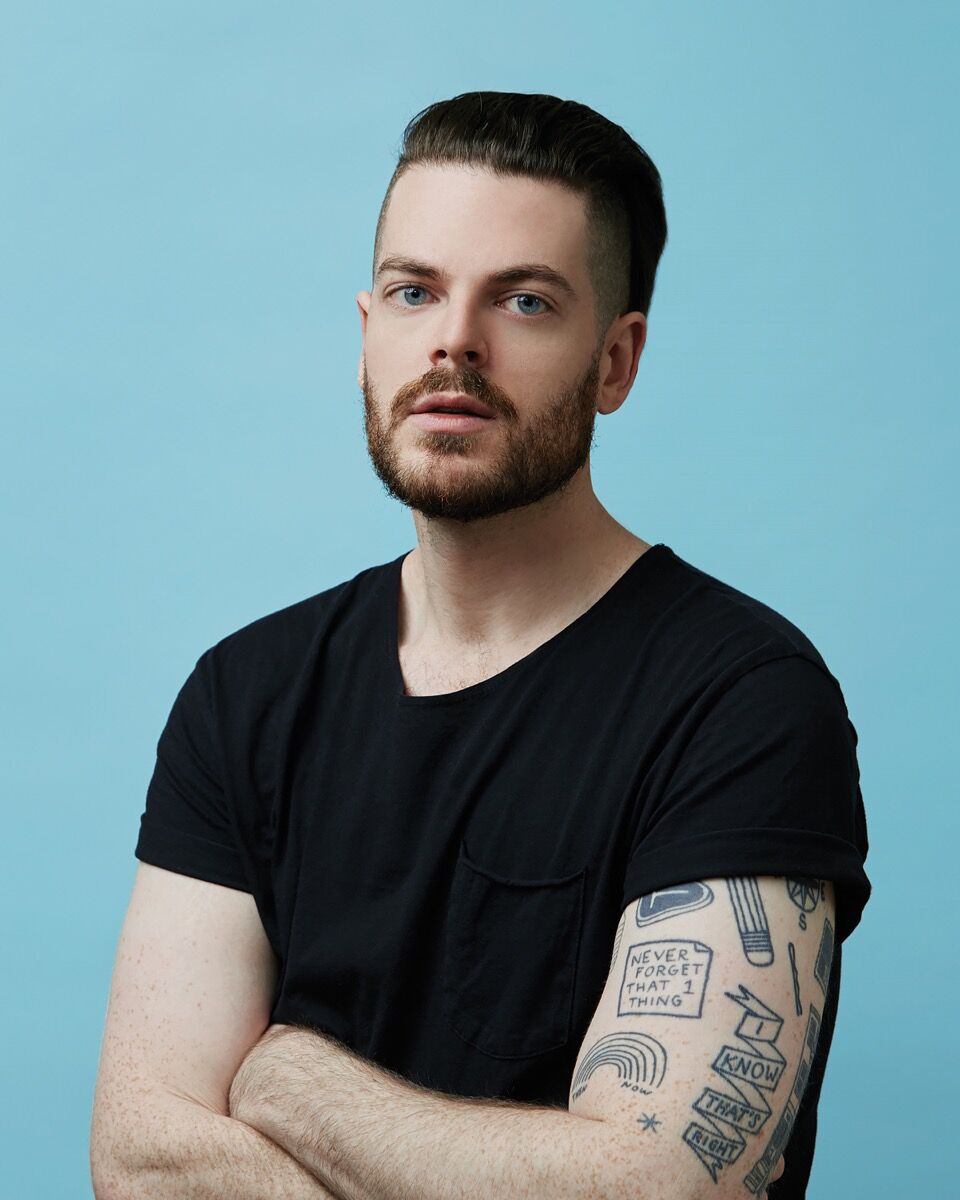 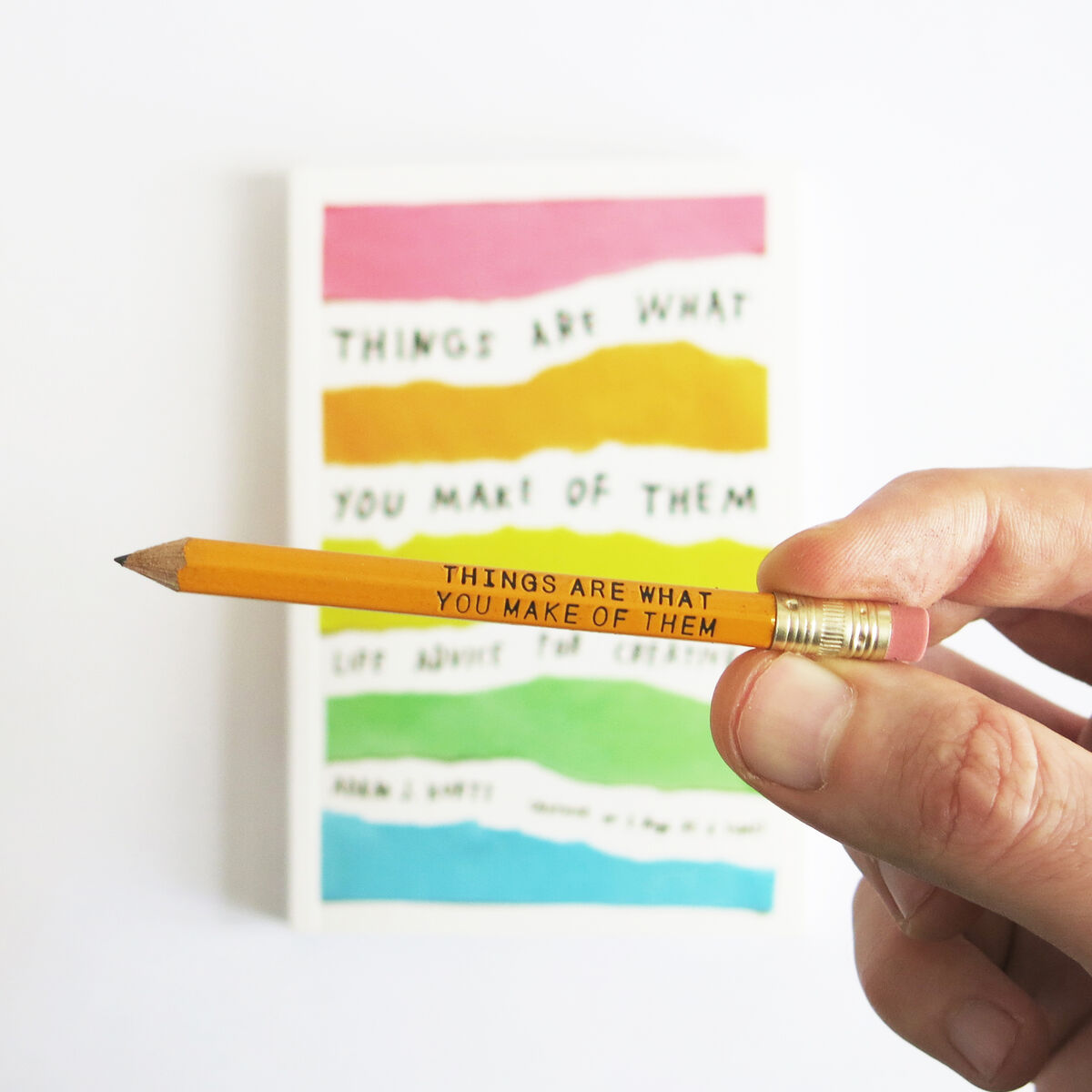 Since graduating from design school eight years ago, Adam J. Kurtz has worked various full-time jobs in creative fields, from film production to advertising to designing gifs for BuzzFeed. But all the while, he was pursuing the work he loved on the side, through self-publishing zines and producing witty novelty wares like pins and stationery. That side hustle led the young designer and artist to develop his own business and become a published author. And in his latest book, he’s sharing advice for his peers.
Titled Things Are What You Make of Them: Life Advice for Creatives, the book is available this month through Penguin’s TarcherPerigee imprint. (Penguin is giving $1 per book sold before October 8th to the Tegan and Sara Foundation, and Kurtz is personally matching that total donation for up to $10,000.) It’s made up of essays from the advice column that Kurtz originally wrote for Design*Sponge, beginning in 2014. “The book is about my ongoing journey,” he explains. “It’s not like I’m an expert telling you all the stuff I learned; it’s more like I’m figuring this out as I go.”
Each color-coded chapter is made up of a series of handwritten notes, on ripped out sheets of notepaper, in Kurtz’s playful, all-caps scrawl. “The handwriting is my way of getting my own voice through, and it lets me say things in a really blunt way,” he says. “It’s like I just took a course one semester ahead of you and I’m saying ‘here are my notes, good luck.’”
His advice ranges from “How to Be Happier” to “Working with Friends & Family,” and truth be told, can be beneficial to people of all professions, right brain-leaning or not. We caught up with the author to discuss one of the foundational chapters, “8 Things Every Creative Should Know,” which he wrote in 2016. He shared the motivations and experiences that led him to develop these candid, edifying tips. Below, we share excerpts from that conversation, which have been lightly edited for clarity.

“My feeling is that everyone has some semblance of creativity in them, it’s just that we don’t necessarily think of it as creativity. If you put on an outfit in the morning—that’s creative thinking. But, you’re not born a brilliant illustrator.
“I have a friend, Jeremy Sorese, who is an award-winning cartoonist, graphic novelist, and editorial illustrator. I think he’s really brilliant and in the past I’ve said to him ‘Oh, I can’t draw like you, I could never draw like you,” and he’s said, ‘Yeah, I couldn’t draw like me either, but after 10 years of drawing every single day, you learn a few things.’ It’s such an obvious thing: Practice makes perfect.”

You are kind of an idiot

“I think this is a funny way to say that no one knows what they’re doing, and I think anyone will tell you that, especially in terms of creative business. If you’re a graphic designer, maybe you’re good at graphic design, but invoicing or doing your taxes—that’s not easy. You can be a brilliant coder, you can build 70 websites, but good luck figuring out your freelance income taxes, good luck filing an LLC.
“The reality is just that you are always going to be learning new things and you are always going to come up against something you’ve never done before. Very often you won’t know that you can do it until after you’ve done it the first time, and then you’ll be able to do it 10 more times. I’m very good at making invoices now. I know how to file my sales tax. I figured it out.”

“Today, you can self-publish. I started making zines and publishing a weekly calendar entirely on my own. And even in the time since I was in school eight years ago, it’s become easier. We now have Google Drive—you have Google Docs, Google Sheets—and you no longer need to buy that software. Now everyone has a phone in their pocket that’s also a camera and records videos, and there are free apps for photo editing.
“The Shade Room is a really great example of a publication that was born as an Instagram account and now it’s extremely influential to pop culture. You don’t need to be offered a job, you don’t need a book deal to make a book—there’s print on demand, there’s Kickstarter and crowdfunding. Even digital garment printing has changed so much in the last 10 years; you can digitally print one T-shirt and the quality is good now (it didn’t used to be that good).
“I want people to stop feeling like they need to get the green light from someone else before they can execute their ideas. If anything, now you have to execute a lot and then you get the green light after proving yourself.” 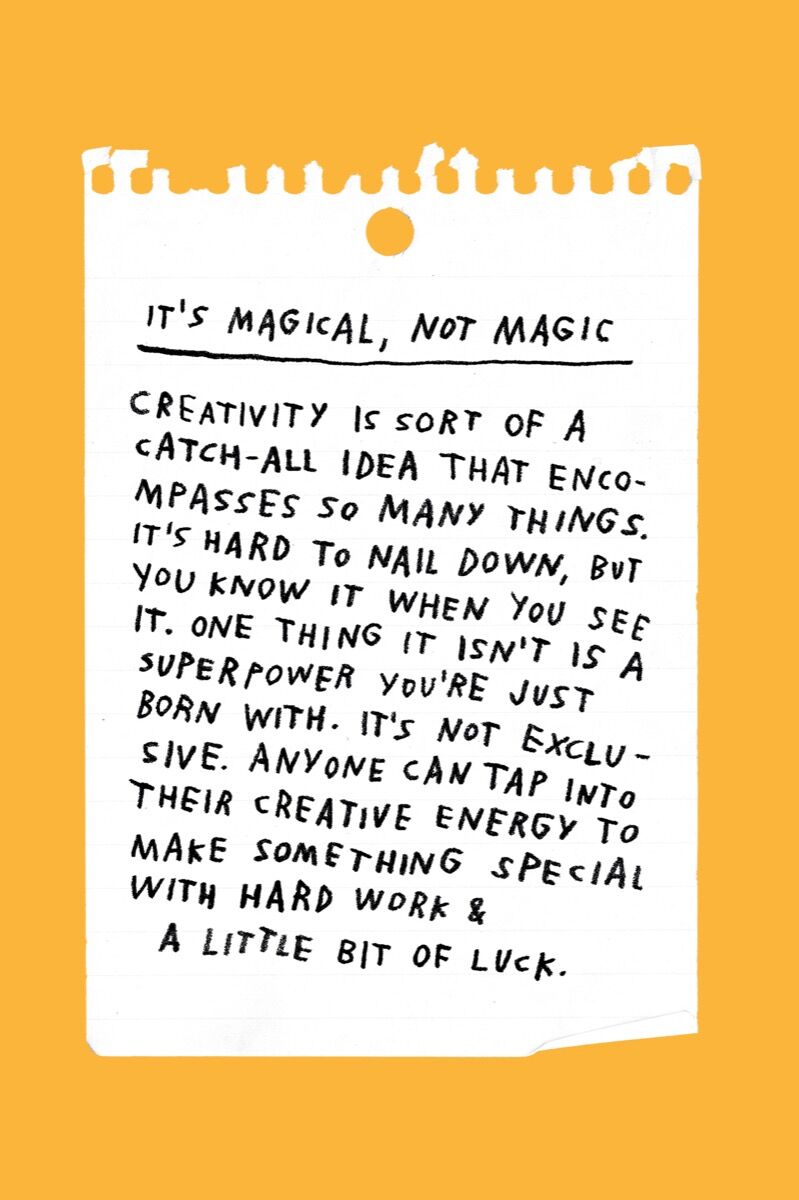 Failure actually is an option

“People love to say failure is not an option, but it is. Generally speaking, there are two options: failure and not failure.
“Don’t set yourself up to be completely gutted if something doesn’t go your way. Instead, recognize that the failure is a possibility; brace yourself, be ready to roll with the punches, to pick back up again. In my mind, something is only truly a failure if you never try again. If you fail twice and then the third time you succeed, then all that failure was really just research. Failure is always an option and I think that instead of ignoring something that is scary, we need to think about how we’re going to come back from it.
“There are so many projects that I’ve executed where I thought, ‘Okay, this was cool, but it wasn’t amazing.’ Recently, I was excited about making fridge magnets and I ordered a thousand fridge magnets and they were all terrible. I could’ve been like ‘that was $400 wasted,’ but instead I thought, ‘I’m going to try again; I’m going to request samples first; I’m going to take my time and research better.’”

Labels will kill you

“Everyone does everything now. If you walk out the door and say ‘I’m a graphic designer,’ what happens if someone asks you to code out a simple web page? Are you a front-end developer now? If you draw one thing, are you an illustrator? The labels become less and less relevant.
“I consider myself at my root a graphic designer, in that everything I do comes out of design thinking and principles, and the combination of text and image. Some people don’t call me a graphic designer. But if you’re holding my book at Barnes & Noble, I’m not gonna slap it out of your hands and say ‘this is a design book!’ Maybe it’s not. Maybe it’s a millennial therapy book—that’s fine. It’s whatever you want it to be.
“Very often we are so in our own thing that we lose sight of how others perceive us. Sometimes the outside perspective is not healthy, but other times it really can be. People started calling me an illustrator, and as someone who really admires contemporary illustrators, I find that a little bit offensive, to them [laughs], because I know what my skill level is and what I'm offering. But if enough people call you an illustrator and enough companies want to hire you to be an illustrator, you might be an illustrator. Don’t exclude yourself from the running. Don’t decline jobs before they materialize.”

You don’t have to be the best at everything

“This just the reality: You don’t have to be the best, and you won’t be the best. And the sooner you realize you're not the best at certain things, the sooner you can collaborate with people who are.
“One of the smartest things I’ve ever done was hiring an accountant, who I’ve been working with for seven years. I remember that first year when through my zines and my art I made $3,000 and he said, ‘Wow, you made $3,000 selling these novelty design balloons and zines?’ And we celebrated. Now, he’s like “Wow, third book deal.’ And he’s proud of me; I consider him a friend.
“I wouldn’t know how to do any of that stuff—I don’t know how to file separate income streams and I definitely am not good at expensing, which is everything, you have to keep track of things. So, I’m so glad that I didn’t try to do things myself and make it harder to grow, or miss out on so much money I could’ve been saving. I’m just not a good businessperson—that’s not my brain.” 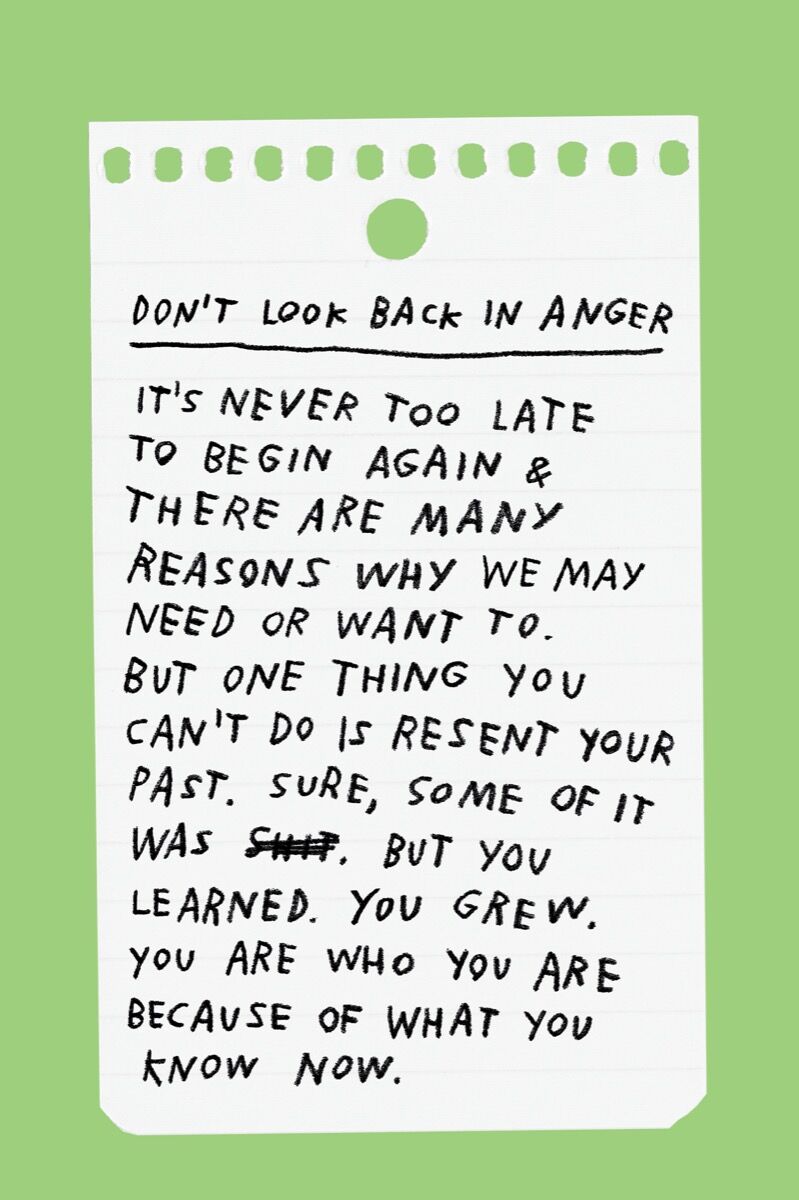 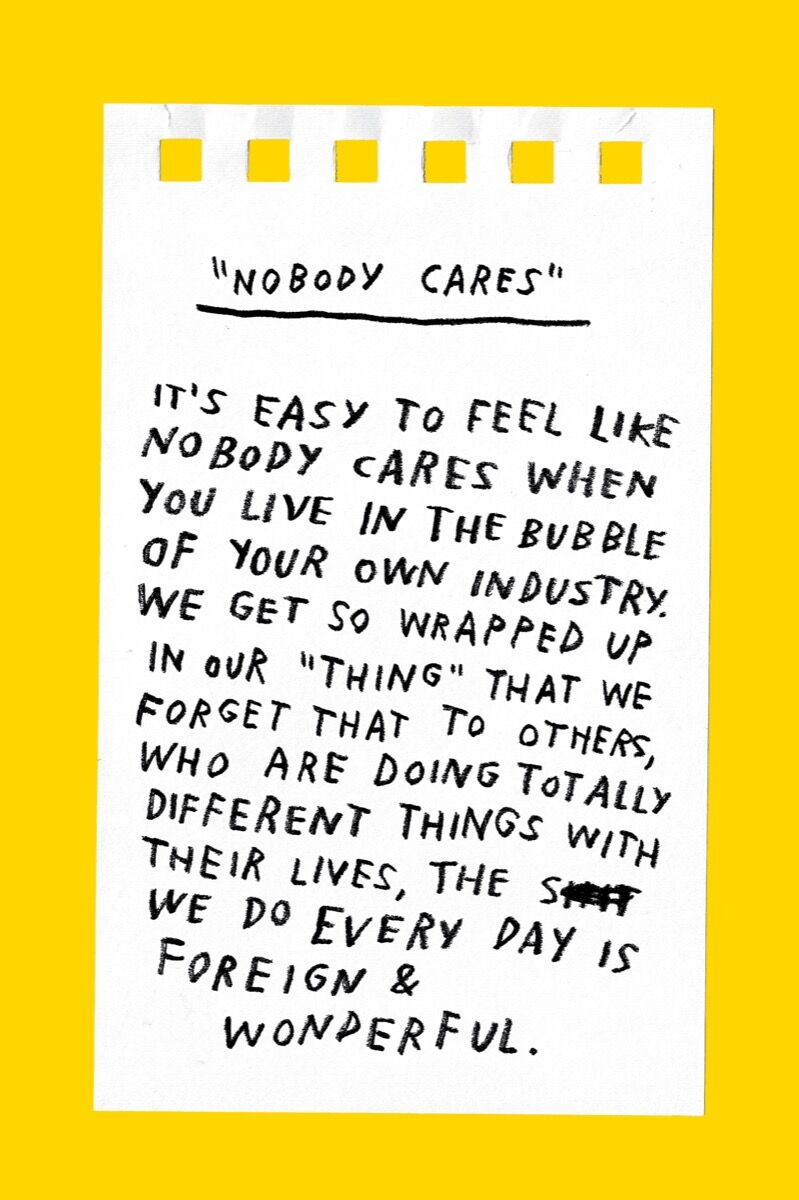 You will hate your work

“I think everyone can relate to this idea: What your best is right now isn’t going to be your best in a year. You’re going to look back and say ‘Wow, I was terrible.’ It’s a little bit of a reminder to say, ‘Hey, don’t worry because this thing that seems super important right now, kind of isn’t.’ But it’s also kind of a backhanded way to say keep on growing. (If I wrote ‘keep on growing,’ you would probably roll your eyes.)
“We are so afraid to put work out there that doesn’t seem perfect; we’re worried about how we’re going to represent ourselves. But the truth is that your absolute best work is going to be total bullshit to you in two years. Make the work, put it out there, keep growing.”

“People forget that being nice is important and that being genuinely kind is not a sign of weakness. A lot of us forget that as hard as we’re working, everyone else is also working very hard. We sometimes confuse being kind with being weak, or we think it’s not cool to be kind or if we give someone else a leg up, then we’re taking a leg away from ourselves. But we can all succeed, and we can raise each other up and boost each other’s careers. We can collaborate freely and we can push attention to different people. We can all do what we do and it can help all of us as a group.
“The mindset of me against the world is not helpful. I’m close friends with several creatives who do very similar work to what I do and I shockingly don’t hate them. We support each other’s projects, we know how hard it is.
“This is so important, and it’s a page that really connects with later chapters in the book—there’s a whole chapter about comparing yourself to others, and another about using your power for good.

“‘Just be nice’ is almost a thesis statement for my entire body of work, which is like, life is hard, we’re trying to get through it; do your best, laugh a little, make friends, have a sandwich.”
—As told to Casey Lesser
Related Stories