Philomena Epps
Dec 30, 2016 2:00pm
The erotic associations between
food
(the
still life
) and the female body (the
nude
) have been prevalent throughout the history of art. The female nudes in
Titian
’s Venus of Urbino (1536-38) or
Ingres
’s La Grande Odalisque (1814), for instance, recline passively and provocatively on daybeds, the objects of the male gaze. They are poised for consumption, rather like a glistening apple in an
Old Masters
’ still life painting.
But in the 20th century,
Surrealist
female artists like
Meret Oppenheim
began to question this relationship. In My Nurse (1936), she bound a pair of high heels in string, suggesting prepared poultry or meat on a serving platter. The splayed arrangement of the shoes resembles a woman lying on her back with her legs spread apart. This disturbing construction created a metaphorical representation of women’s status in society.
With the rise of feminist art practices in the 1970s, and the production of iconic works such as
Martha Rosler
’s parody video, Semiotics of the Kitchen (1975), women began to subvert and destabilize these notions of a woman’s position in the world. Below, we bring you some of the myriad ways in which female artists have turned this relationship on its head over the last five decades.

In feminist artist
Carolee Schneemann
’s most famous artwork, Meat Joy (1964), eight performers in their underwear—four men and four women—writhed around on the floor with chicken, raw fish, sausages, and other objects, in a pseudo-orgy-like ritual. The performance was intended to unleash the performers’ (and the audience’s) most carnal selves, dismantling social norms in order to liberate the participants. Although the performance didn’t free all the participants from gender conventions (there were reports of the performance amplifying gender dynamics as men found ways to assert their power), it brought attention to these relationships and the way in which humans conform to social restrictions and taboos. 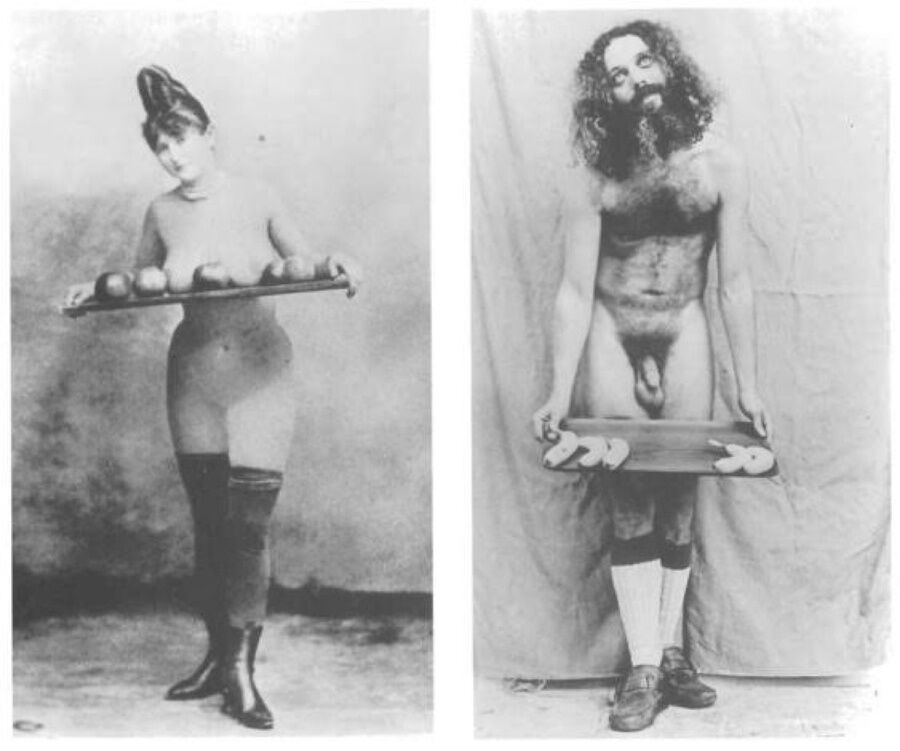 In 1972, the prominent feminist art historian Linda Nochlin (well-known for her 1971 article “Why Have There Been No Great Women Artists?”) created a staged photograph, titled Buy My Bananas. The image satirized Achetez des Pommes, a 19th-century representation of a nude woman holding a tray of apples under her breasts. Nochlin replaced the woman with a naked man holding a tray of bananas below his genitals.
Buy My Bananas drew attention to the comparative lack of objectification when it came to male sexuality. Nochlin later wrote on the subject further, in Woman As Sex Object: Studies in Erotic Art, 1730-1970 (1973), explaining that despite “a rich underground feminine lore linking food—specifically bananas—with the male organ, such imagery remains firmly in the realm of private discourse, embodied in smirks and titters.” 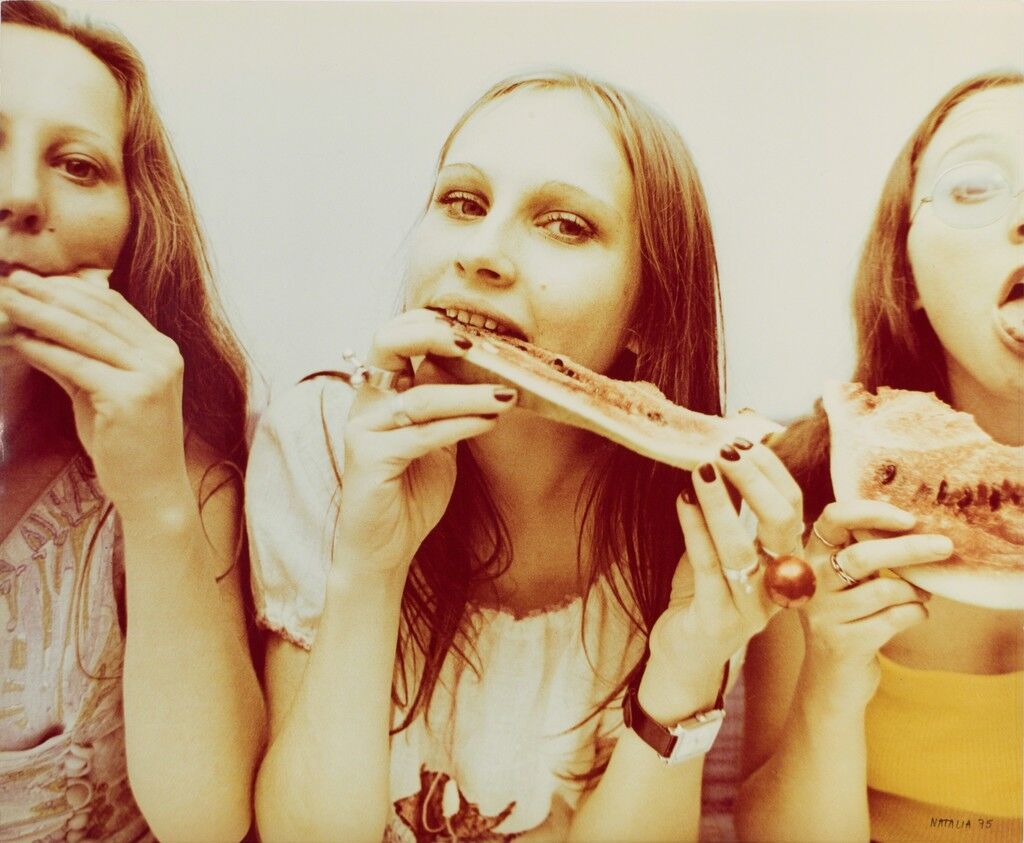 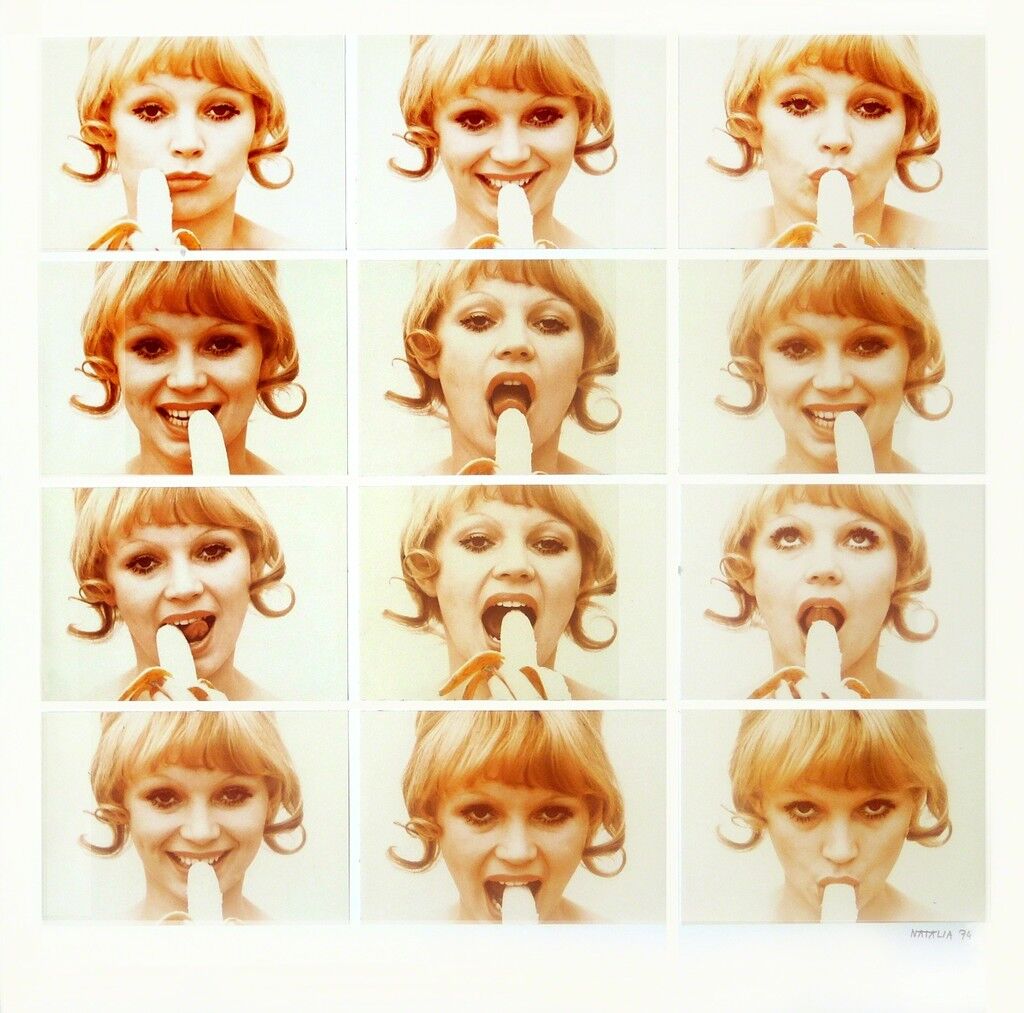 Natalia LL
Consumer Art, 1975
lokal_30
Advertisement
In the post-war decades,
Natalia LL
(Lach-Lachowicz) began to pioneer an avant-garde feminist art practice in Poland. Her photographs, moving image work, and installations addressed how an increasingly consumerist world was shaping the construction of female identity within society. The “Consumer Art” series (1972-5), a pastiche of a pornographic film, critiqued the commodification of women’s bodies.
LL directed a group of young female models to provocatively eat a selection of sexually suggestive or phallic foods—bananas, sausages, ice cream, and jelly. Through the performance, the male body became a product for consumption. Women are depicted as active protagonists, “man-eaters,” rather than the passive objects of male spectatorship or pleasure. 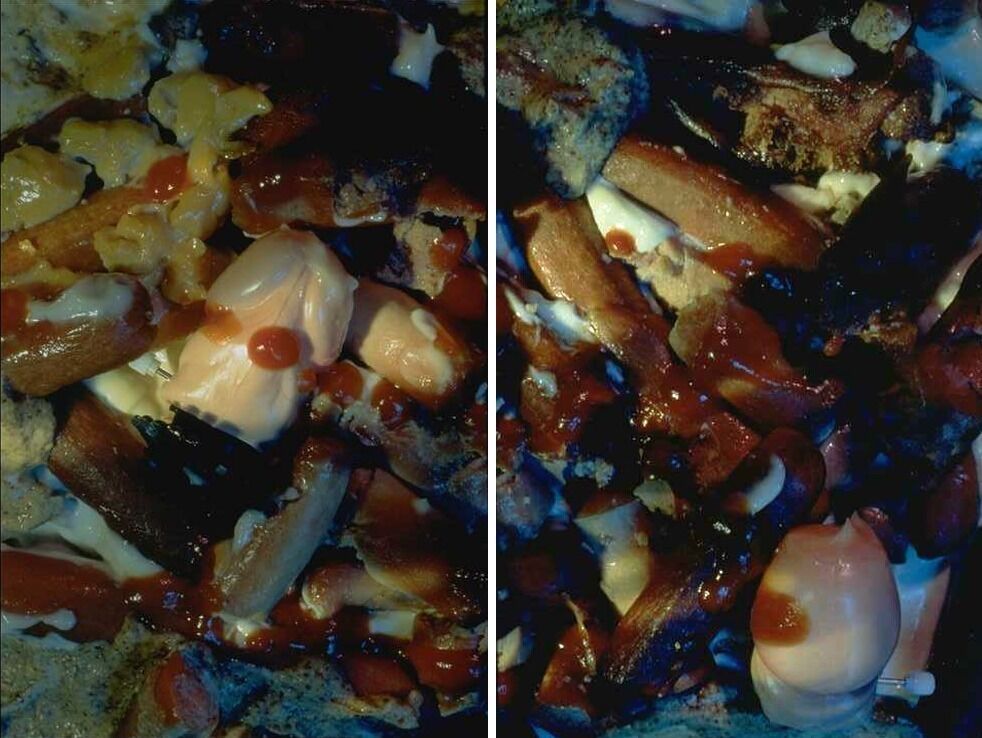 Cindy Sherman
Untitled, 1987
Metro Pictures
In the mid-to-late 1980s, Cindy Sherman produced the “Disasters” series, picturing grotesque and disturbing scenes that explored the relationship between the female form and the expulsion of bodily matter. Although the female body is absent from the majority of the images, it’s implied through the use of symbolic material.
The tableau in Untitled #175 (1987), for example, suggests a bulimic binge, depicting food, waste, and vomit. Theorist Laura Mulvey discussed the abject imagery in Sherman’s work in terms of society’s misogynistic tendencies. Due to male idealizations of female beauty, she explained, women are forced to “identify with misogynistic revulsion” and deny their basic bodily fluids and functions, such as mucus and defecation. 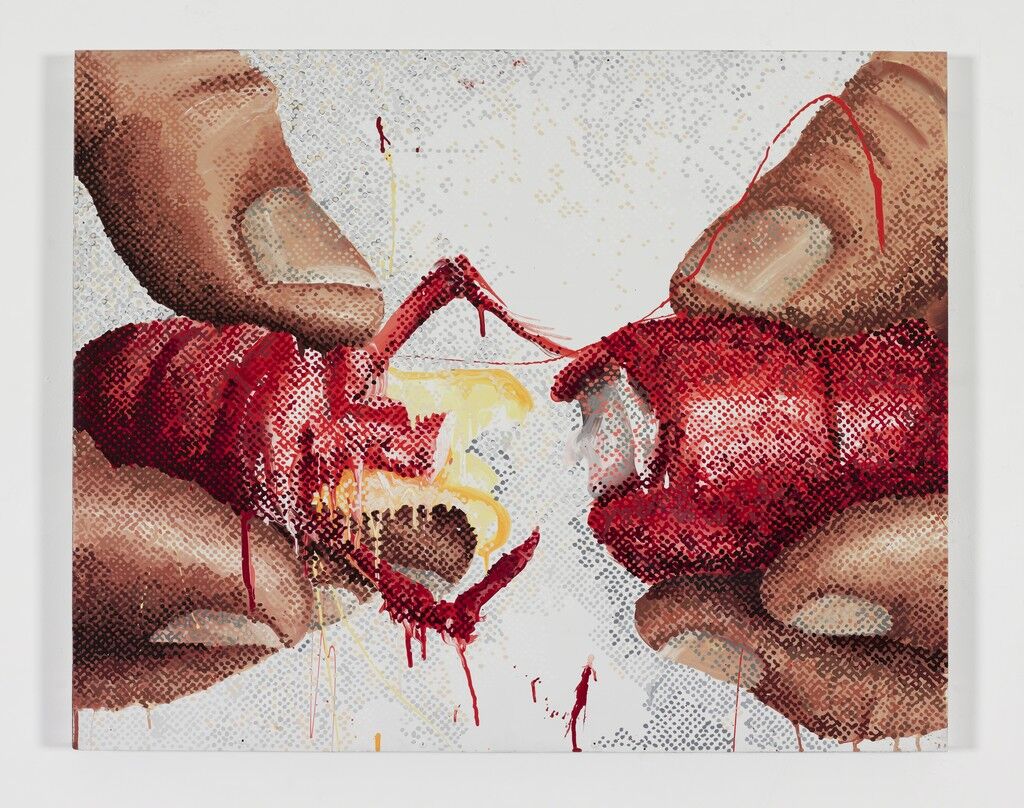 In her work in the 1990s,
Lucas
employed basic food items to reflect the way British men sexualized the female body in abrasive and vulgar slang. In Two Fried Eggs and a Kebab (1992), the cheapening, misogynistic terms for the female sex are represented literally—fried eggs represent breasts and the kebab meat evokes a vagina. The work is constructed as a set of symbolic signs that in turn implicate viewers. Once viewers acknowledge that two fried eggs and a kebab resemble a woman, they are forced to recognize this derogatory perception of women.

Nao Bustamante and
Coco Fusco
’s collaborative performance piece explored the relationship between Latina women, food, and the erotic. While researching the piece, Fusco traveled to Cuba and they both traveled to Mexico, where they interviewed women whose livelihoods were bound to cultural tourism or the sex industry.
In the resulting performance, the audience was invited to enjoy a lavish, ancient fertility feast, participate in a dance lesson, and learn Spanish translations for the “language of love” through a series of vignettes. STUFF! examined the ways that globalization and imperialism created a market in which women of color were seen as goods rather than as autonomous consumers.

Rottenberg
’s work visualizes the female body as a microcosm for larger social issues to do with class, gender, and labor. Her film installation Cheese (2008) is loosely based on the Sutherland Sisters, who manufactured and sold a hair product for baldness in 1880s New York. The sisters were renowned for their extraordinarily long hair, which they claimed was the result of the secret ingredients in their miracle invention.
In Rottenberg’s version, the sisters live together in a ramshackle barn where they make cheese, not just from the milk of the goats they keep, but also through supernatural rituals involving their hair. Screened on six projectors within a wooden structure replicating a barn, Cheese plays out various arduous scenarios of the sisters engaged in activities—washing, brushing, milking, and so on. The women’s existences, even the evocation of their magic powers, revolve around the collective labor of manufacturing one single object for consumption.

Last year, Sarley’s “Fruit Art Videos” went viral on Instagram. The videos depicted fruit being caressed, rubbed, prodded—eventually “fingered,” earning them the name the “fingering fruit” videos—until they burst or oozed juice in submission. Sarley utilized a range of fruits as yonic symbols, including blood oranges, limes, lemons, strawberries, apricots, grapefruits, kiwis, and papaya. “The video is basically about personifying and empowering vaginas through humor and absurdity,” she commented in an interview.
Instagram disabled the account on three separate occasions due to their ban on “sexually suggestive content.” The same questionable policy has driven other accounts featuring representations of menstrual blood and pubic hair, for example, to be disabled. The furore that surrounds the “Fruit Art Videos” speaks volumes about the repression of female sexuality.
Philomena Epps
Related Stories