8 Works to Collect by Korean Artists at KIAF

Alexxa Gotthardt
Oct 12, 2016 5:22pm
The 15th installment of the Korea International Art Fair (KIAF) opens today, bringing 180 Korean and international galleries to COEX Hall in Seoul’s Gangnam district. Across the lattice of booths, work by Korean artists—both on-the-rise emerging names and master painters who haven’t yet received the international recognition they deserve—stand out. Below, we bring you our top picks. 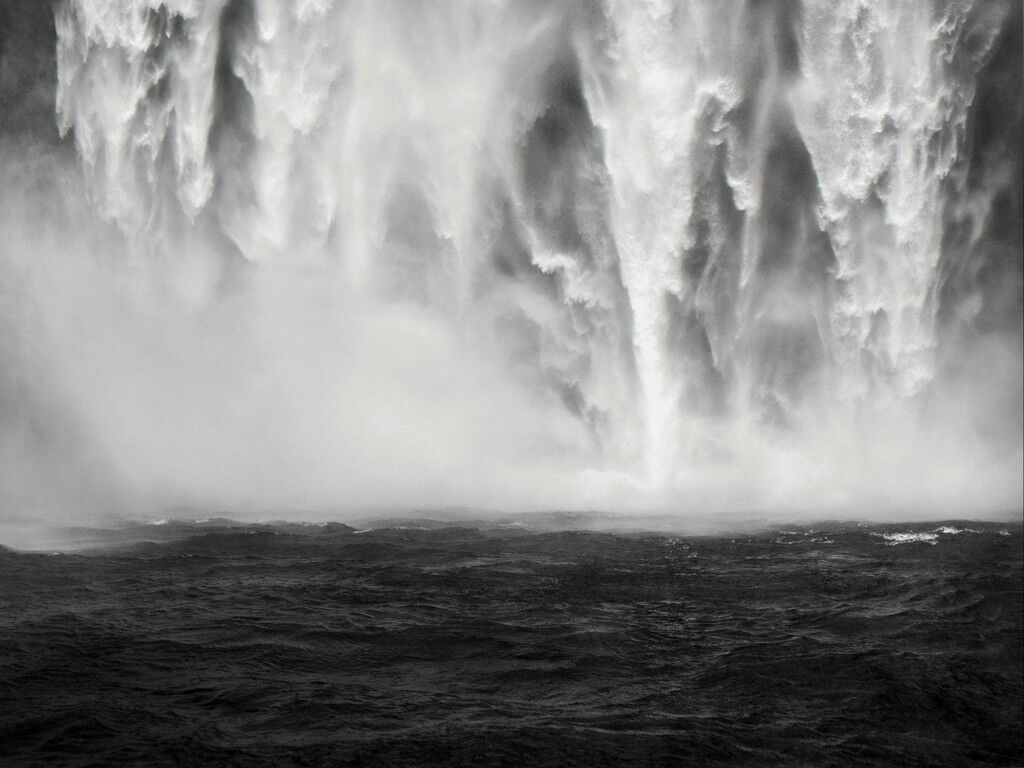 Skogar #0384, 2015
Flowers
To snap this stunning image, South Korean photographer
Boomoon
stood in the frigid waters of Iceland’s Skogar waterfalls until he attained the perfect shot—one that captured the sheer power of rushing water. The large-scale black-and-white photograph comes from Boomoon’s “Skogar” series, which is also currently on view in a solo exhibition at Cologne’s Forum für Fotografie. The series is the most recent manifestation of his arresting body of work that has explored the sublime qualities of nature in stunning large-format images since the 1980s. As in nearly all of the artist’s landscape images, this photo is void of human presence, subtly engaging themes of sustainability and preservation. 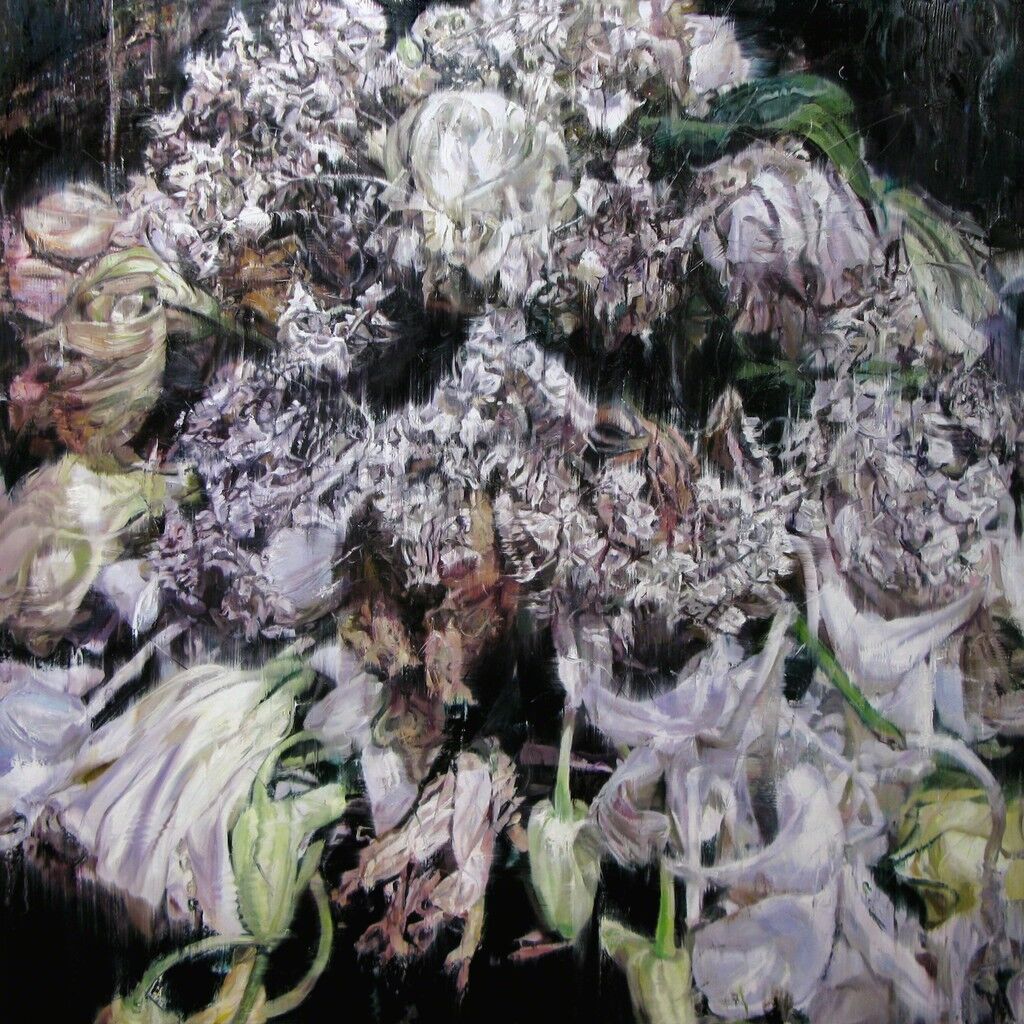 Dry flower, 2016
Gallery Baton
Advertisement
Following a strong summer show of new work at Seoul’s Gallery Baton, rising South Korean painter
Yoon
has been on collectors’ radars across Asia. This recent painting, executed in the artist’s signature blurred technique, shows a bouquet of dead, dry flowers against a black background. By using the decaying arrangement as a vanitas, the work presents an intimate study of themes Yoon has explored throughout his career: memory, mortality, and the passage of time. 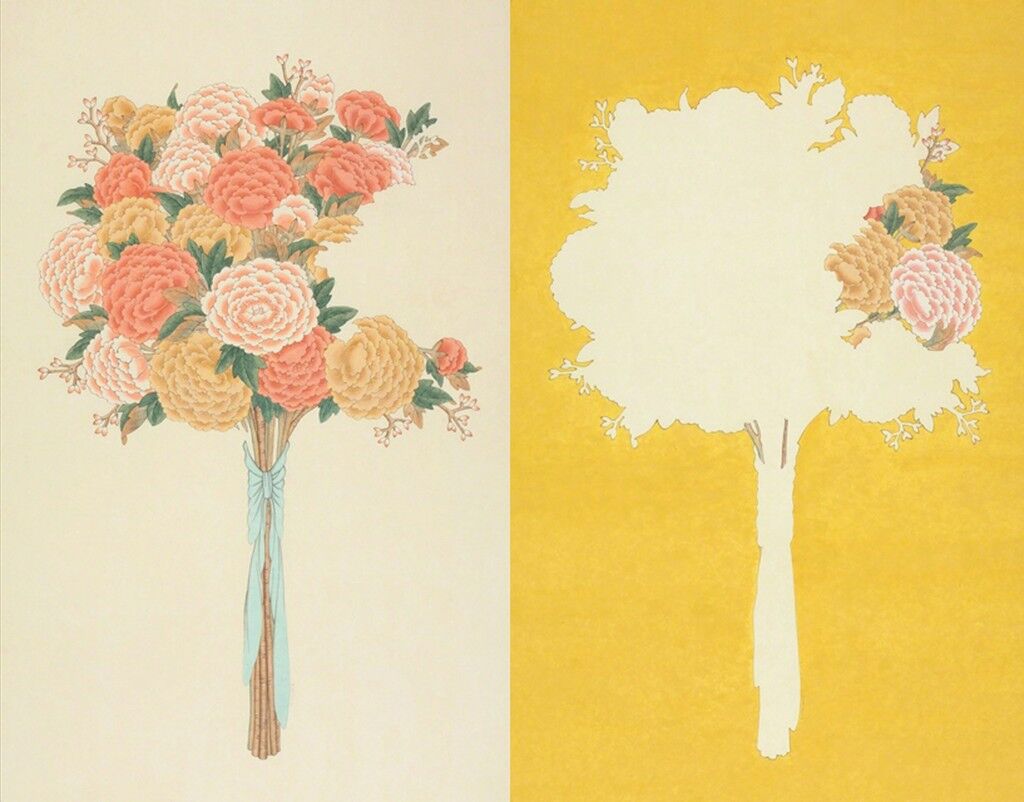 Portrait of Peony, 2013
Asian Art Works
Across her body of work,
Ahn
elegantly builds on traditional Korean painting techniques to engage themes of her own cultural heritage and identity as a Korean woman living between Asia and the United States. Here, she uses the peony, traditionally a symbol of wealth and honor in Asian society, as an abstract form of self-portraiture. In two delicately rendered bouquets, parts of each bunch have been removed, illustrating the scars and traumas that life brings that we’d prefer, perhaps, to erase from our minds and bodies. 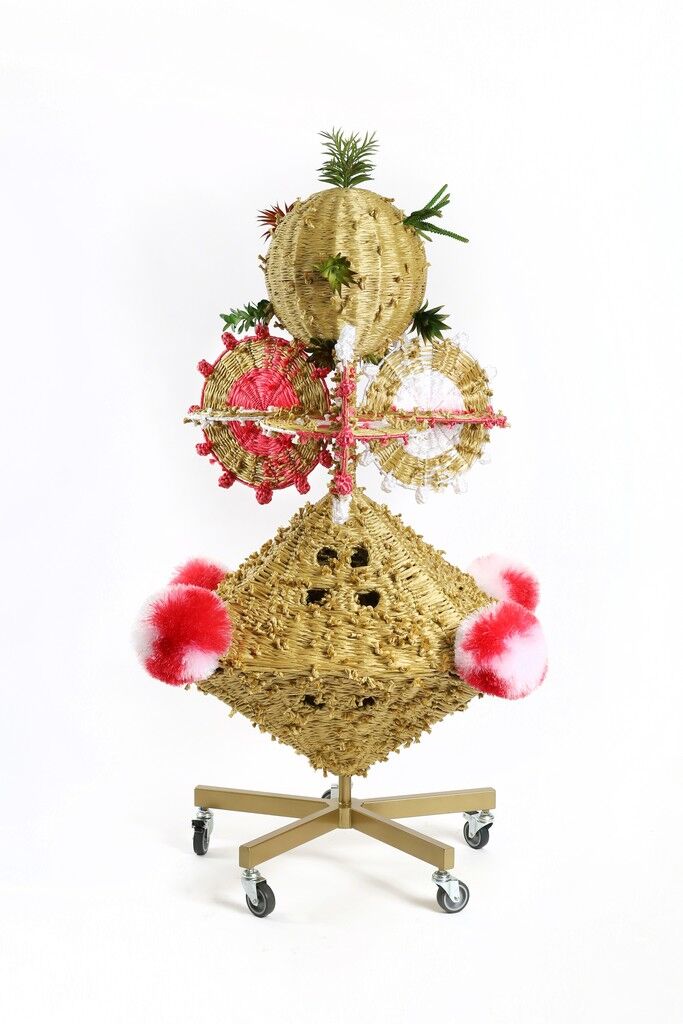 The Intermediate – Airflow of Pyramid Winnow, 2015
Kukje Gallery
2016 has been a big year for
Yang
, who has been the subject of solo presentations at Greene Naftali in New York, Hamburger Kunsthalle in Hamburg, and the Centre Pompidou in Paris. To KIAF, Kukje Gallery brings one of the powerhouse artist’s recent artificial straw sculptures, the likes of which took center stage at her 2015 solo show with Beijing’s Ullens Center for Contemporary Art. This odd and alluring work comes from Yang’s “The Intermediates” series, a band of anthropomorphic totems that reference rituals of all kinds—from age-old Korean cultural traditions to contemporary daily routines. Here, the sculpture’s base pays humorous homage to office chairs and its leafy tufts to desktop plants. 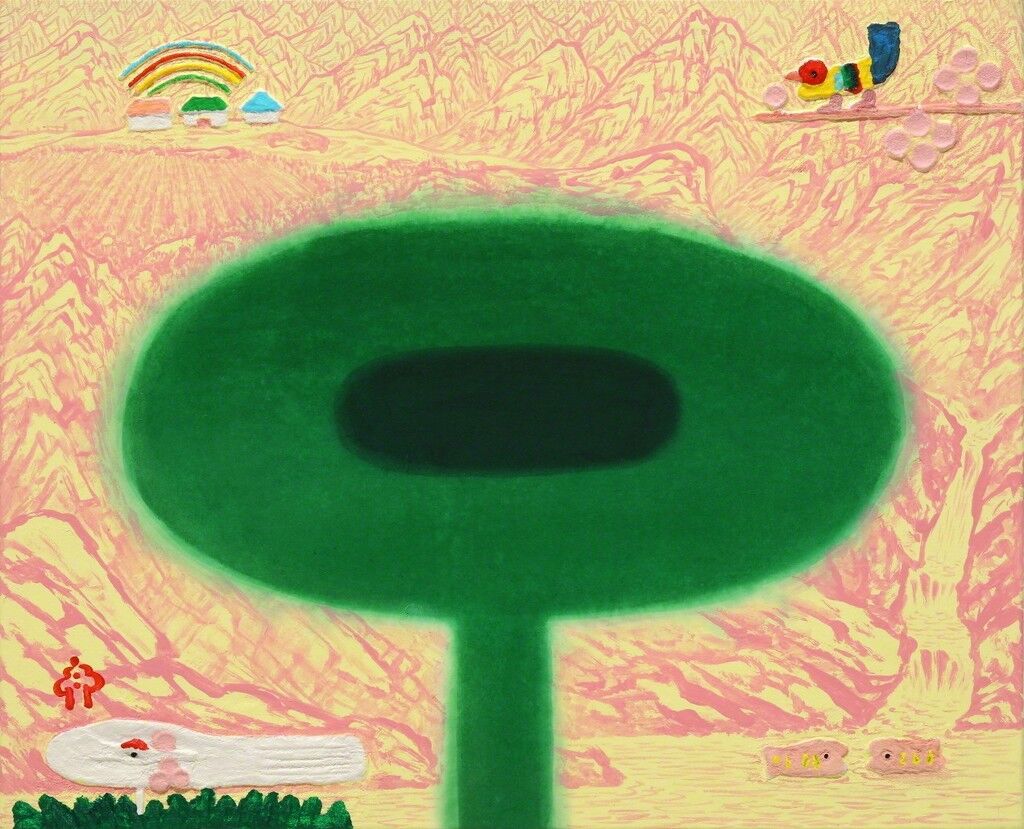 The Song of Life, 2016
Galerie GAIA
With the international art world’s focus turning towards Korean art, many of the country’s great artists are getting their due—and we expect
Kim
to be one of them. The acclaimed painter, critic, and professor has been an authoritative voice on the Seoul painting scene since the early 1990s, thanks in large part to his bold paintings, which fuse traditional Korean artistic themes (nature and spirituality) with a
Pop Art
aesthetic. In this a new canvas, titled The Song of Life (2016), Kim sets striking, cartoonish renderings of flora and fauna against a delicately executed mountainscape reminiscent of 15th-century Joseon dynasty landscape painting. 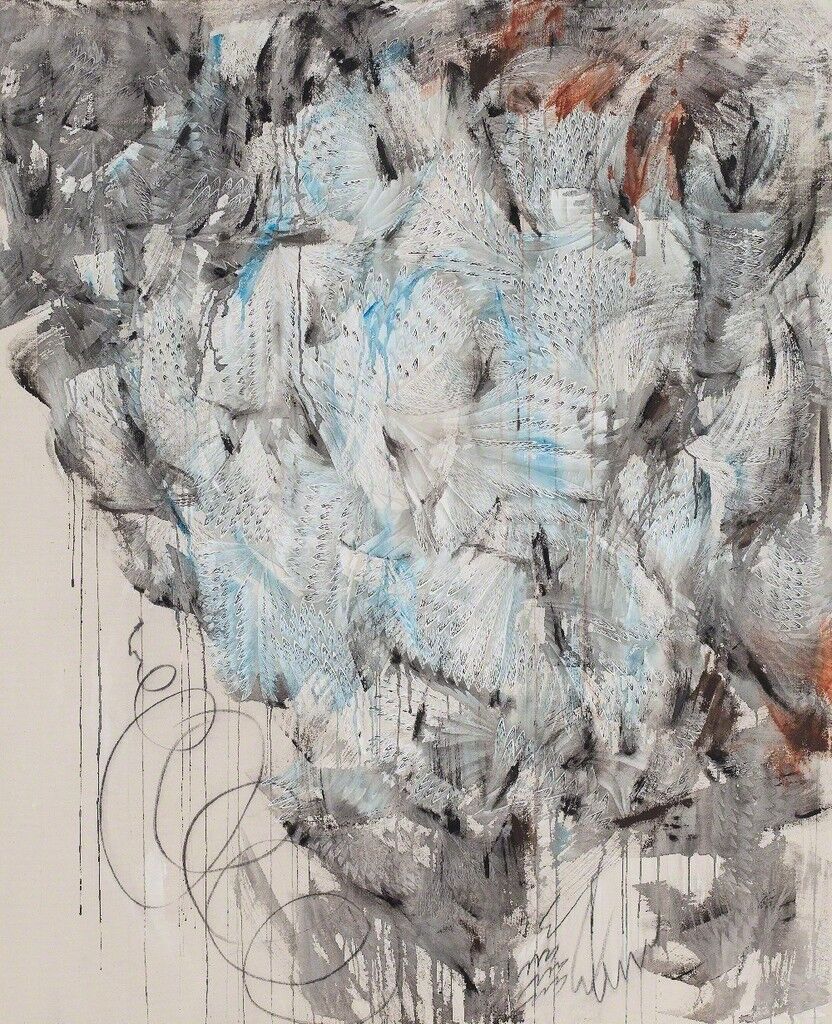 In Sync I, 2015
Gallery Koo
This mesmerizing painting by
Jeong
is typical of the young South Korean, London-based artist’s work, defined by canvases brimming with lively swoops, roiled centers, and feathery edges. Many of the gestures that populate her compositions suggest animals in frenzied flight or buildings in the throes of implosion. But no matter what the inspiration may be, each of Jeong’s paintings burst with a compelling, explosive energy that seems to suggest that an element of chaos remains at the heart of all man-made objects—even art.

On view at KIAF: 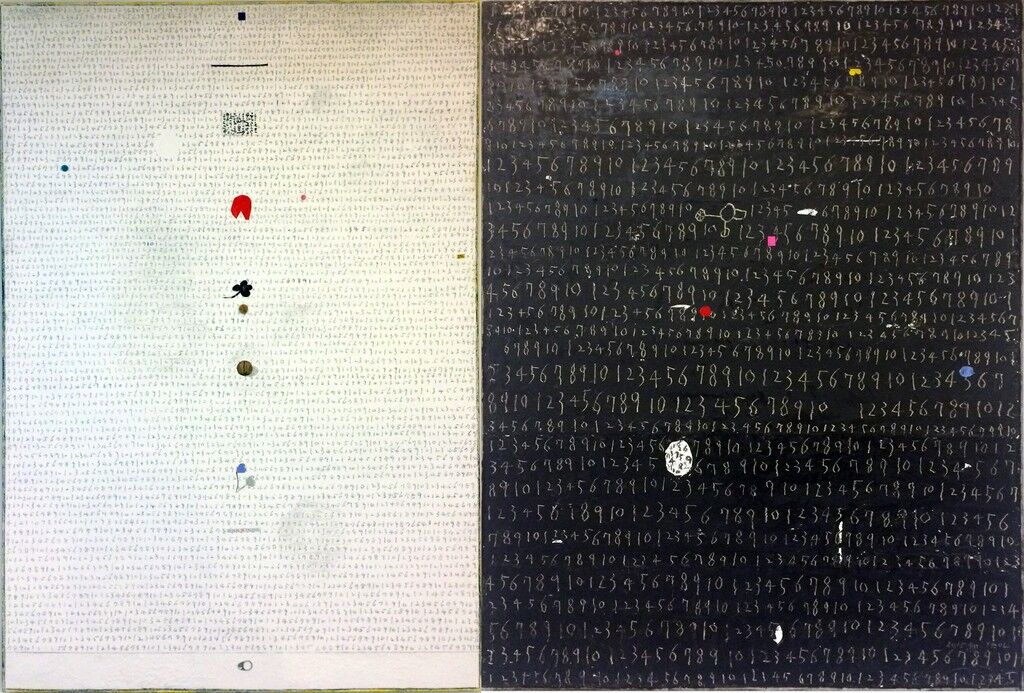 Untitled, 2015
Gallery Focus
Oh
is regarded as a master painter in South Korea, where his mesmerizing canvases have influenced recent generations of the country’s young painters (the artist is a professor in the Fine Art Department of Mok-Won University). Exhibiting since the mid-1960s, Oh has developed a signature approach in which he layers seemingly random assortments of symbols (flowers, balloons, and coffee cups among them) over dense fields of numbers, all executed in a naive, childlike style. The resulting compositions—spellbinding lattices of frenzied scribbles—allude to obsessive note-taking and stream-of-consciousness creativity. 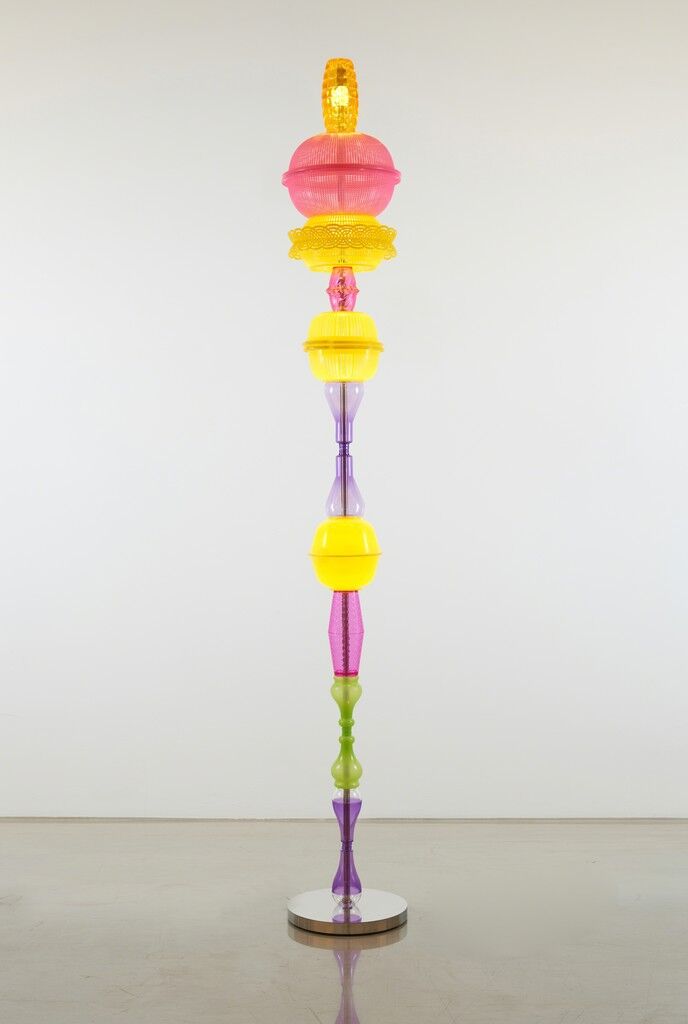 Alchemy, 2016
Park Ryu Sook Gallery
The vibrant sculptures and installations of
Choi
, dubbed the leader of Korea’s Pop Art movement, have made appearances at museums and biennials the world over. But, as evidenced by this recent sculpture, there’s more to the Seoul-based artist’s work than bright colors or big scale. Here, Choi transforms everyday objects like plastic baskets, bowls, and bottles (the likes of which can be found at a 99-cent store) into something akin to art-world gold (a colorful, glowing sculpture). Across his body of work, Choi has probed the connection between humble materials and the art world’s more commercial, hierarchical systems. In 2008, for one of his most renowned installations, the artist festooned Seoul’s Olympic Stadium with garlands made from trash; from far away, the building looked like it had been encrusted in jewels.
Alexxa Gotthardt
Related Stories

How the Tate Museums Reopened amid Major Changes and Turmoil
Samuel McIlhagga
Aug 12, 2020