Yelena Keller
May 24, 2017 6:08pm
There has been a resurgence of print in the age of expeditious digital consumption. In theory, the internet should have rendered zines (self-published, small circulation magazines) and small press communities obsolete. With millions of articles posted daily to social media, it’s easy to get caught up in an addictively endless scroll, which itself has some longing for the heydays of print and paper. The popularity of zines today, however, should not be chocked up to nostalgia alone. Rather, the printed medium has long been a tool for political and social engagement amongst artists and writers of color.
The black literary zine, Fire!! created during the
Harlem Renaissance
of the 1920s by writers such as Langston Hughes and Zora Neale Hurston is an early example. Self-publishing continued through the decades, with the Black Panther Party Newspaper and the Chilean women’s magazine Aquelarre. Still, the history of zine culture remains largely dominated by narratives of white men and women.
Utilizing both the tangibility of print and the connectedness afforded by the internet, today’s artists and writers of color are continuing to create spaces for dialogue, pioneering conversations through zines—a medium that allows them to exchange ideas, opinions, and art on their own terms. These eight zines are just a few of the notable print publications claiming space and reinvigorating a decades-long tradition of collective healing through communal expression. 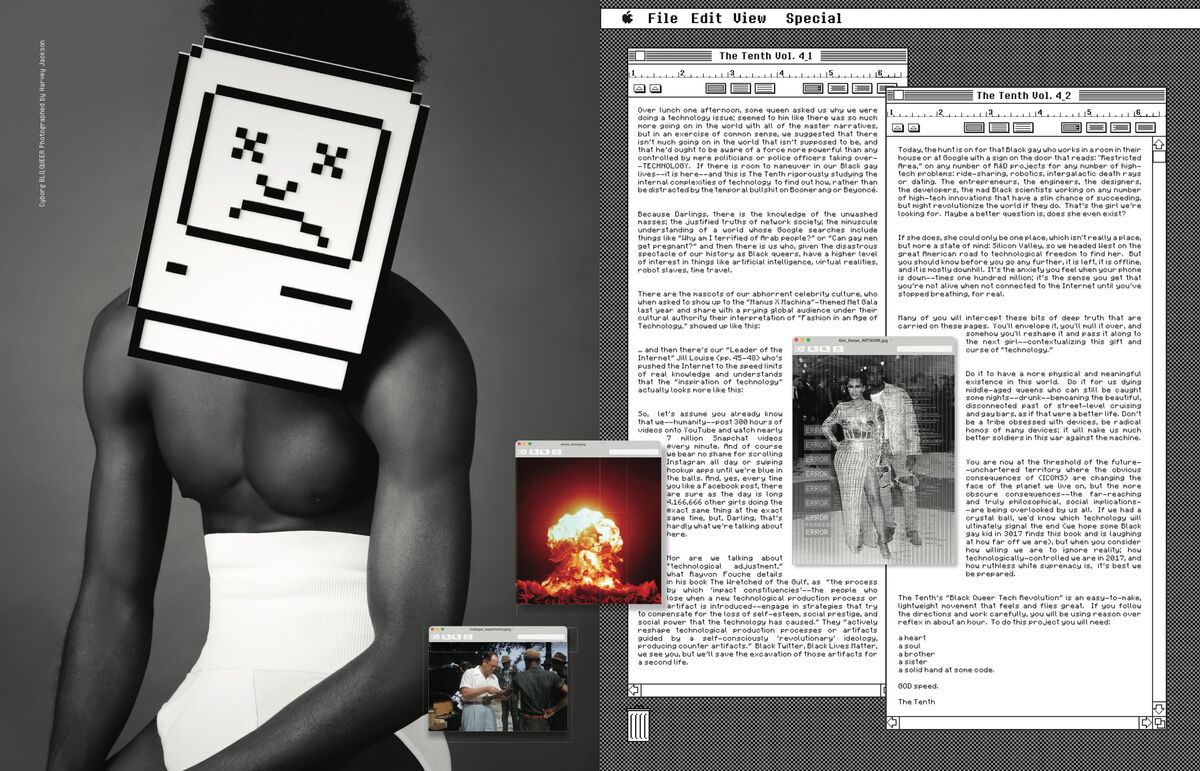 Image courtesy of The Tenth Magazine. 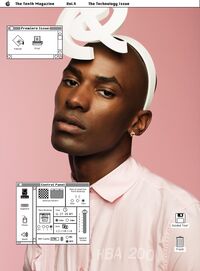 4 Images
View Slideshow
Self-described as “black, gay, and unbothered,” The Tenth magazine and collective serves as an outlet for black and brown queer bodies to express themselves with unapologetic ingenuity and sincerity. The publication was founded by André Verdun Jones, Khary Septh, and Kyle Banks in 2013. It traces the history of black gay communities and explores the evolution of their cultures, aesthetics, and ideas into the contemporary.
The first issue was released in 2014 with a host of over 80 contributors, providing diverse perspectives and communicating through visual and literary mediums. The trio found it imperative to create a publication that honored the contributions of black gay men, bringing their voices out from the shadows of the exclusionary white gay world. In contemporary culture, commentary on social issues is largely dominated by white males, a reality to which Septh remarks “they just don’t have all the answers.”
The magazine format provides depth and allows for readers to overcome the the limited attention spans caused by social media. The Tenth has become a physical record of the contemporary black gay community outside of the digital world. As a material object, it can be passed down through generations and has historical presence—which is both a benefit and a responsibility that is not lost on the magazine’s founders. 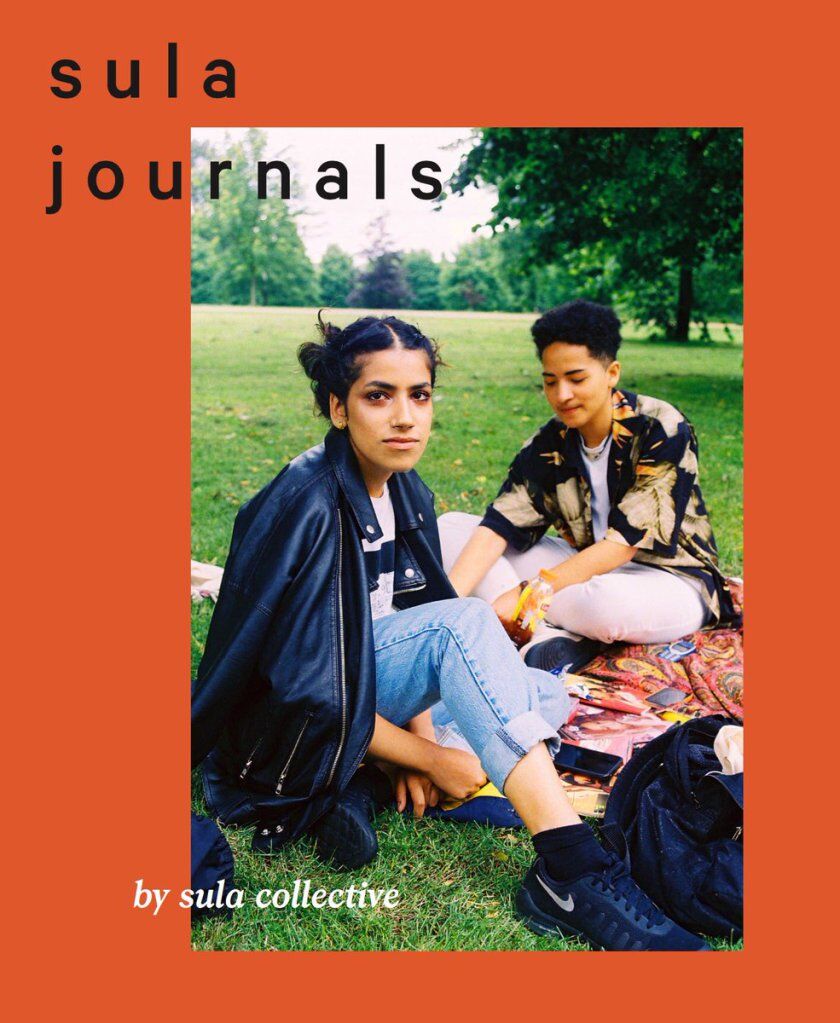 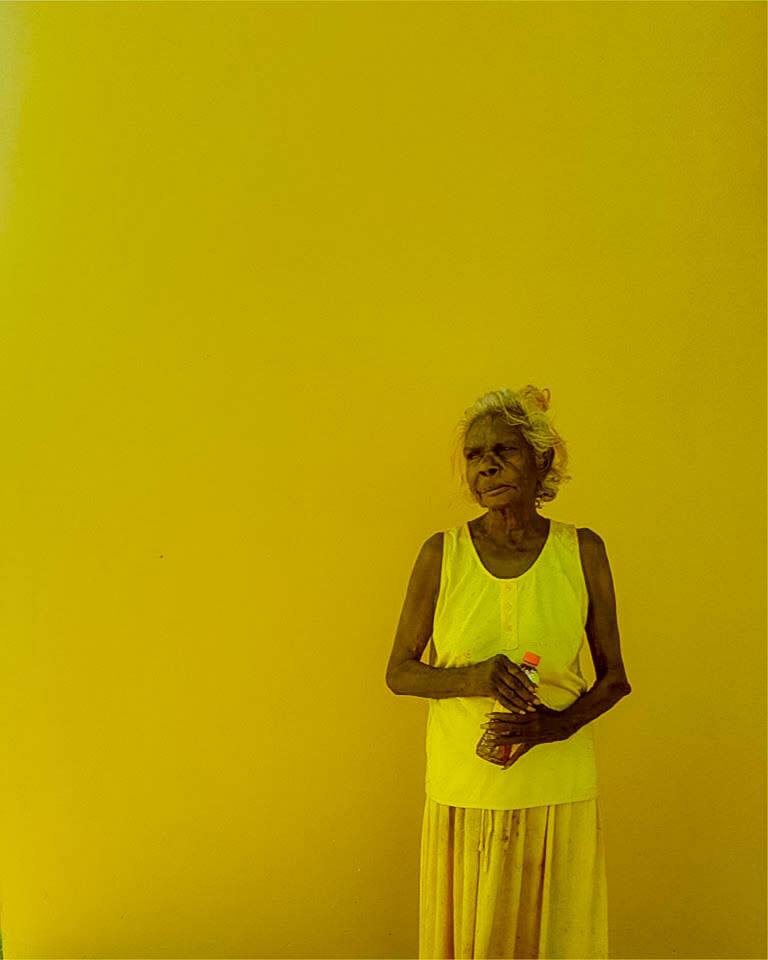 Advertisement
Sula cofounders Sophia Yuet See and Kassandra Piñero met online. Their unlikely collaboration was forged through various social media and messaging platforms as the duo bounced ideas back and forth from England to the U.S., where they each lived. Naturally, Sula started as an online platform and has only recently begun its foray into print. “We had always considered ourselves a zine in the non-traditional sense, but I think zines appealed to us simply because of their history,” Piñero remarks. Uninterested in making the experiences of people of color accessible to white audiences, Sula Collective strives to create opportunities for dialogue within marginalized communities.
One of Sula Collective’s chief concerns is showcasing the artwork, poetry, and other creative contributions of people of color. Following the footsteps of zine communities pre-internet, Sula’s publishers see print as an opportunity for marginalized people to contribute widely by making due with the limited resources they have. With each zine taking on a different theme or structure, Sula approaches the print medium as an option for creative exploration not afforded through formatted and stylized online platforms. Echoing the sentiments of the other zines I spoke with, Sula’s Piñero expressed a desire for zines that are not organized for people of color to be held accountable in supporting and celebrating those that are. 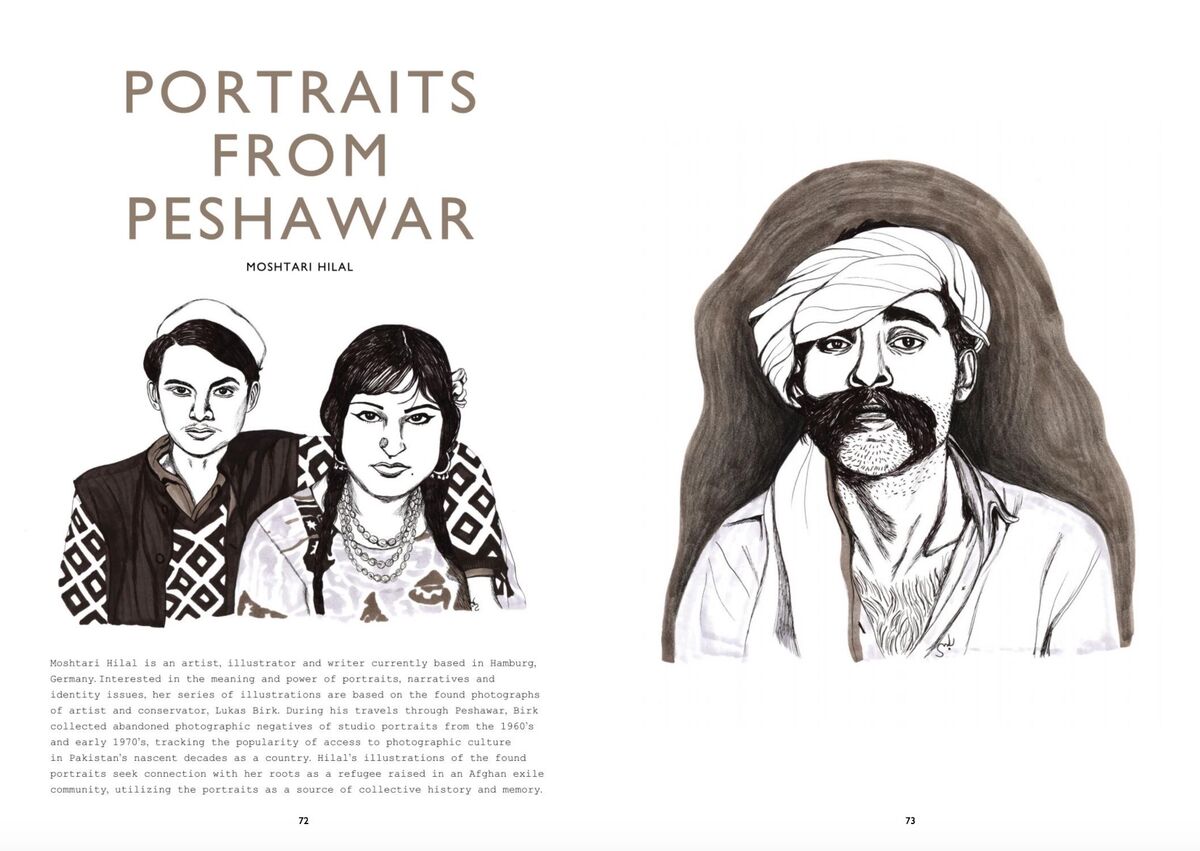 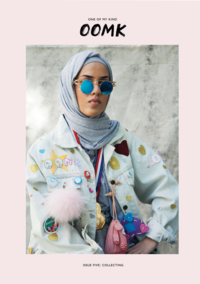 4 Images
View Slideshow
One of My Kind or OOMK was founded in London in 2013 by three Muslim women: Sofia Niazi, Sabba Khan, and Rose Nordin. They each made zines themselves, so the trio were already familiar with the small press community in the city and wanted to create something that spoke to their interests in faith and spirituality, activism and art. OOMK positions the zine community as an alternative art school, where people from all walks of life can congregate around similar issues and concerns, can learn from one another, and can share their art in an affordable and accessible way.
Each issue focuses on a different theme, and in the most recent release they explore artist’s collections. On its cover a woman with a grey cotton headscarf and reflective blue tinted sunglasses stares confidently at the camera. Her jean jacket is covered in pins and patches, a pink feathery ball protruding from her chest and the letters “OOMK” below her shoulder. Around her neck hang two gold medals. This image examines the importance of identity-based memorabilia in creating a jumping-off point from which we may connect and communicate with others, reflecting back on the relevance of zines themselves. 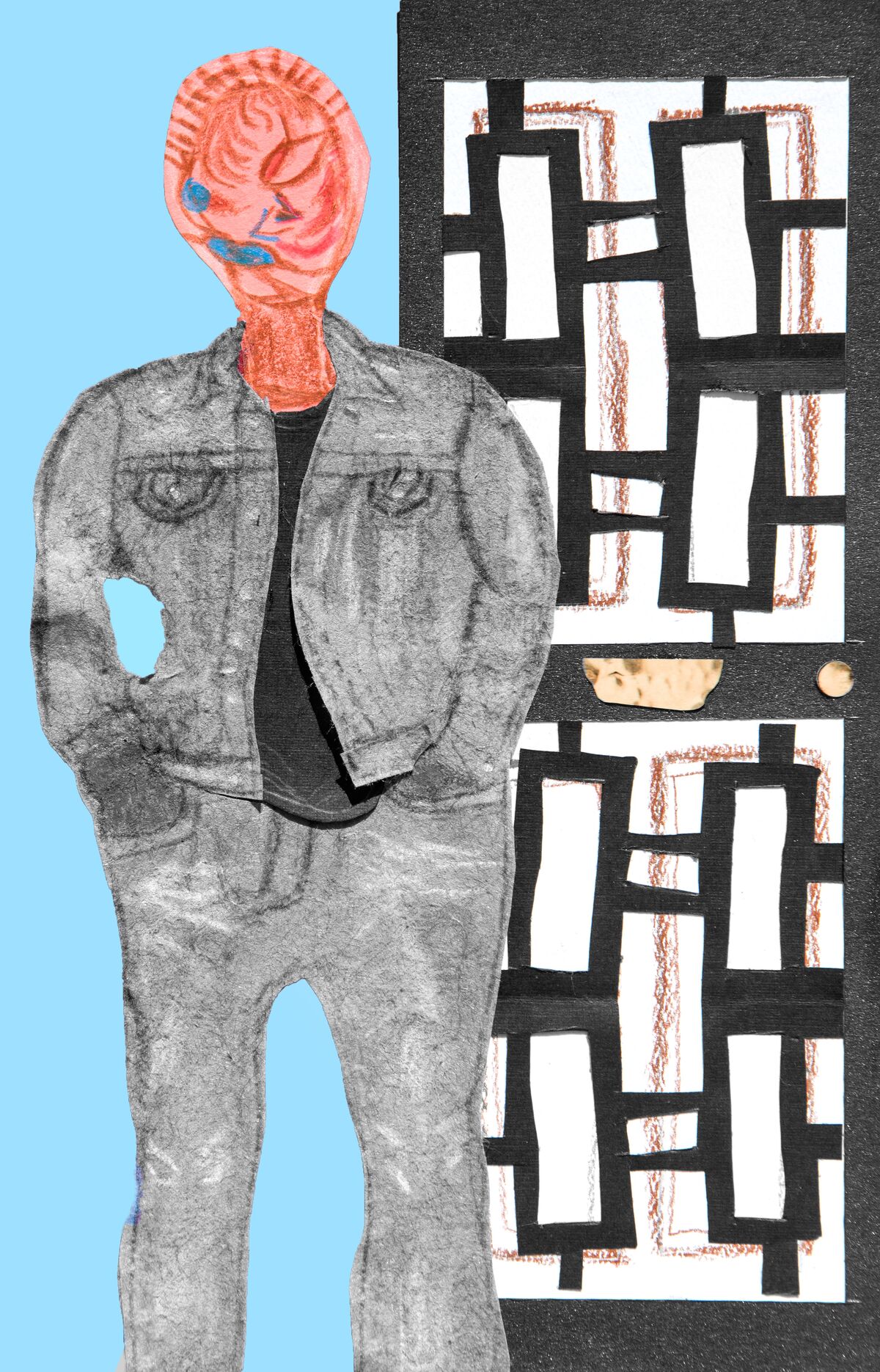 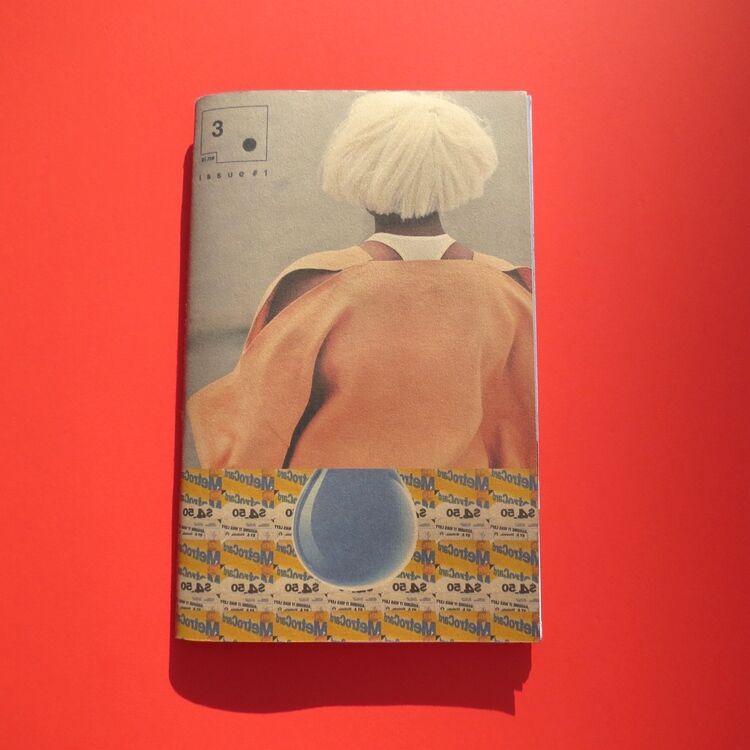 Since its launch in June of 2014, 3 Dot Zine has become a nexus for zine culture and community building in Brooklyn and Baltimore. Founder and editor Devin N. Morris has never been interested in presenting his work online, nor does he much appreciate consuming digital imagery. Instead, Morris revels in the ability to alter the physical page. Often employing paints, colored papers, pastels and photos to create intricate collages, Morris has found that print allows the space for experimentation that other forms of publication often limit.
3 Dot Zine is about much more than just the freedom of the medium: It’s about the cultivation of community. Self-publishing gives Morris—a black queer artist from Baltimore living in Brooklyn—the autonomy to legitimize his own experience while encouraging others to do so as well. Harking back on a time before the internet, when grassroots organizations like the Black Panthers used self-published newspapers and magazines as a tool for organizing and stimulating conversation, Morris hopes that 3 Dot Zine will do the same.
In a time when it can feel nearly impossible to have personal interactions and insightful conversations in real life, Morris has managed to create physical spaces for doing just that, with the launch of his Brown Paper Zine Fair held at MoCADA earlier this year. “Anyone can make a zine and because I understand that, I want to make space for the proliferation and nourishment of those ideas,” says Morris. 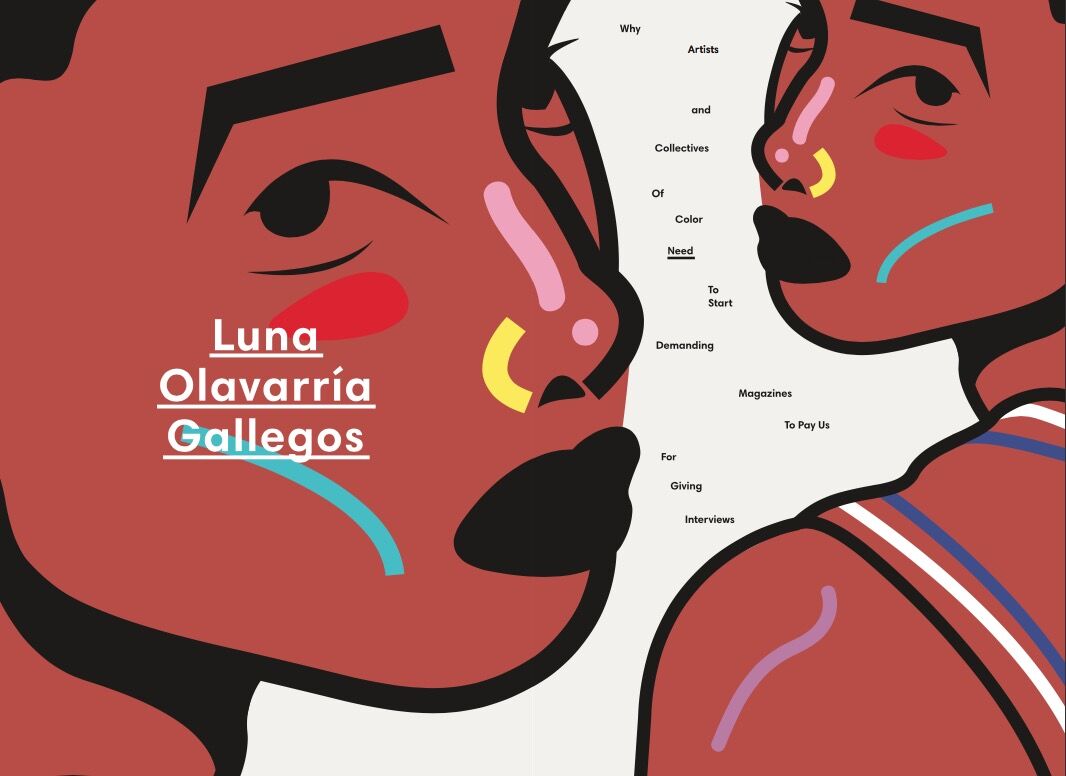 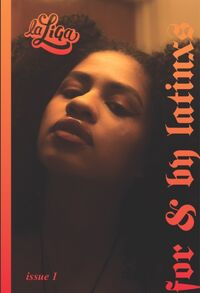 4 Images
View Slideshow
Only in its third year of publication, La Liga has already become a hotbed for latinx, chicanx, and Latin American expression. La Liga calls attention to the constructed “Latinidad”—a condensing of the Latin American experience that has been criticized for ignoring distinctions of race, ethnicity, or country—and challenges monolithic perceptions of the Latin American community.
Organized by self-taught publishers, editors, content creators, graphic designers, and photographers, La Liga has built itself up from a Tumblr blog to an online and print publication, and is offered in both english and spanish. La Liga is deeply concerned with offering a diverse and robust understanding of the Latin American identity, one that includes the voices of queer, indigenous, trans and afro-latinx individuals as well.
With intrinsic ties to mobility and migration, La Liga’s attraction to print is directly linked to the practice of pamphleting. Printed in local Latin American-owned shops in Brooklyn, and for sale at lesbian and vegan bars and queer latinx-led music events, La Liga hopes to diversify zine spaces by engaging directly with the community it serves. In a message from el equipo (the team) they state that “independent publishing is about creating alternative economies, distributing conocimientos (knowledge), building community and learning to hold each other accountable.” 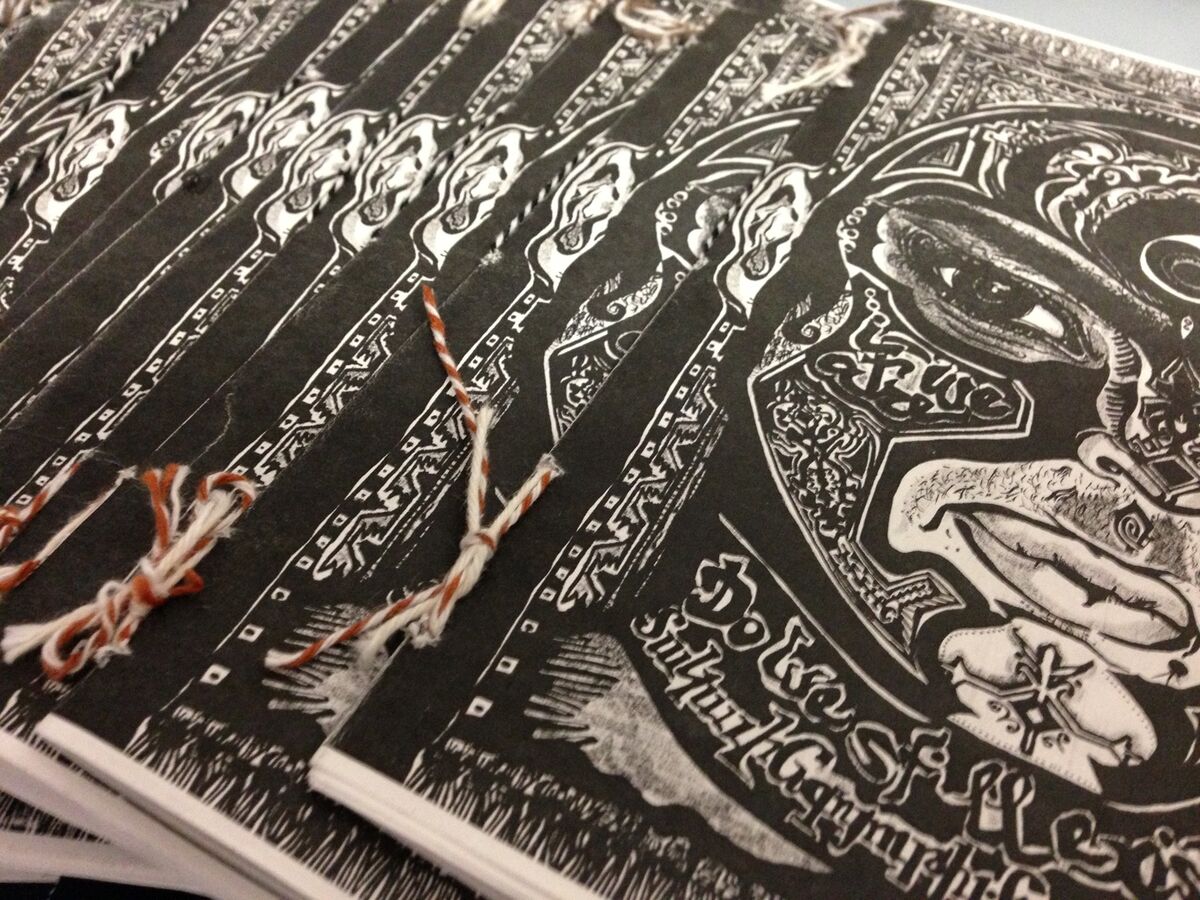 Image courtesy of The Hye-Phen.

“I thought that I was the only queer and trans Armenian on earth and that my zine wouldn’t be read by anyone,” says Shak'ar Mujukian, founder of The Hye-Phen magazine and collective. Despite growing up near Glendale, the U.S. city with the highest Armenian population, Mujukian spent most of his life feeling extremely alone, even after scouring the internet, libraries and bookstores for other queer Armenian artists and activists.
This was the impetus for his first zine, which would eventually open him up to an unexpected community of queer Armenians all over the world. Together, they formed The Hye-Phen Collective. The title of the zine refers to the Armenian word “hye,” used to describe a person of Armenian descent and alludes to the hyphenated experience of being Armenian. The printed zines of The Hye-Phen are just as important to its history as they are to its present, as Mujukian quips, “just because technology can fully replace something doesn’t mean that it should… Zines are one of those cool obsolete things that remind us how to live offline, even if that means appropriating the past.” 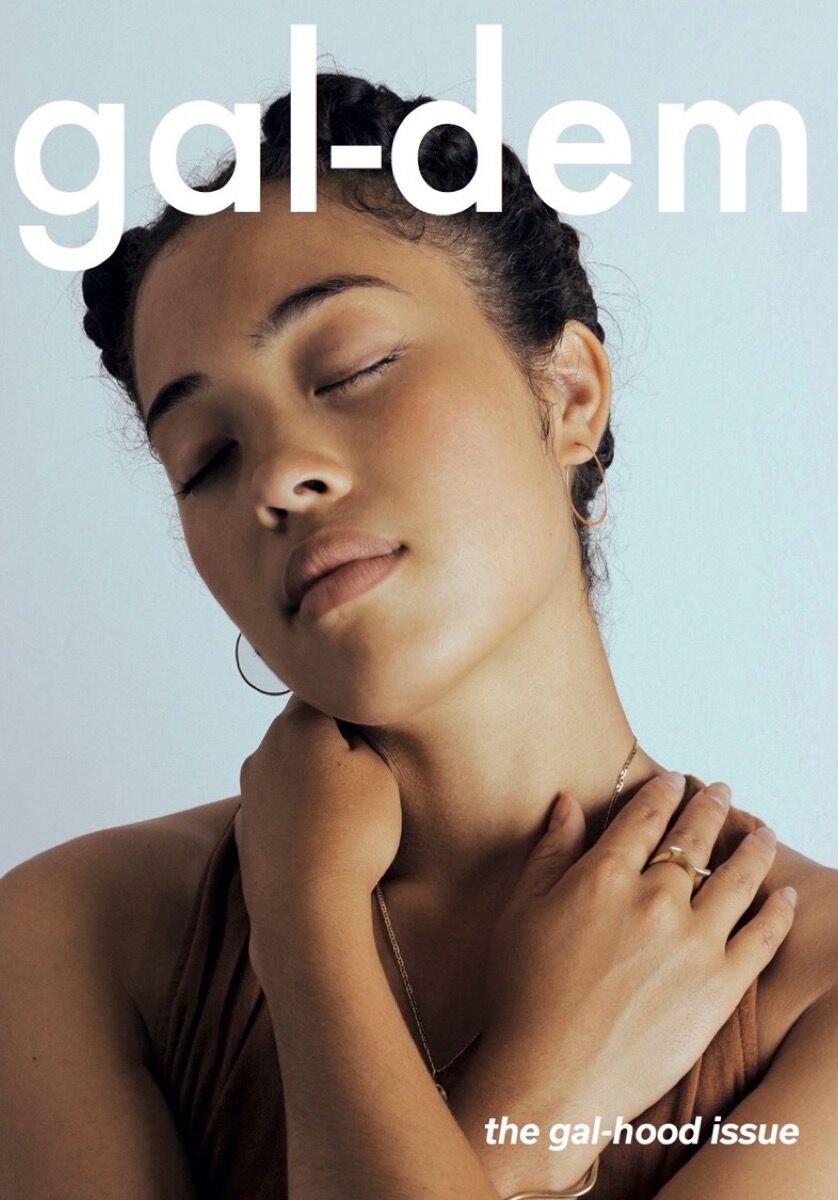 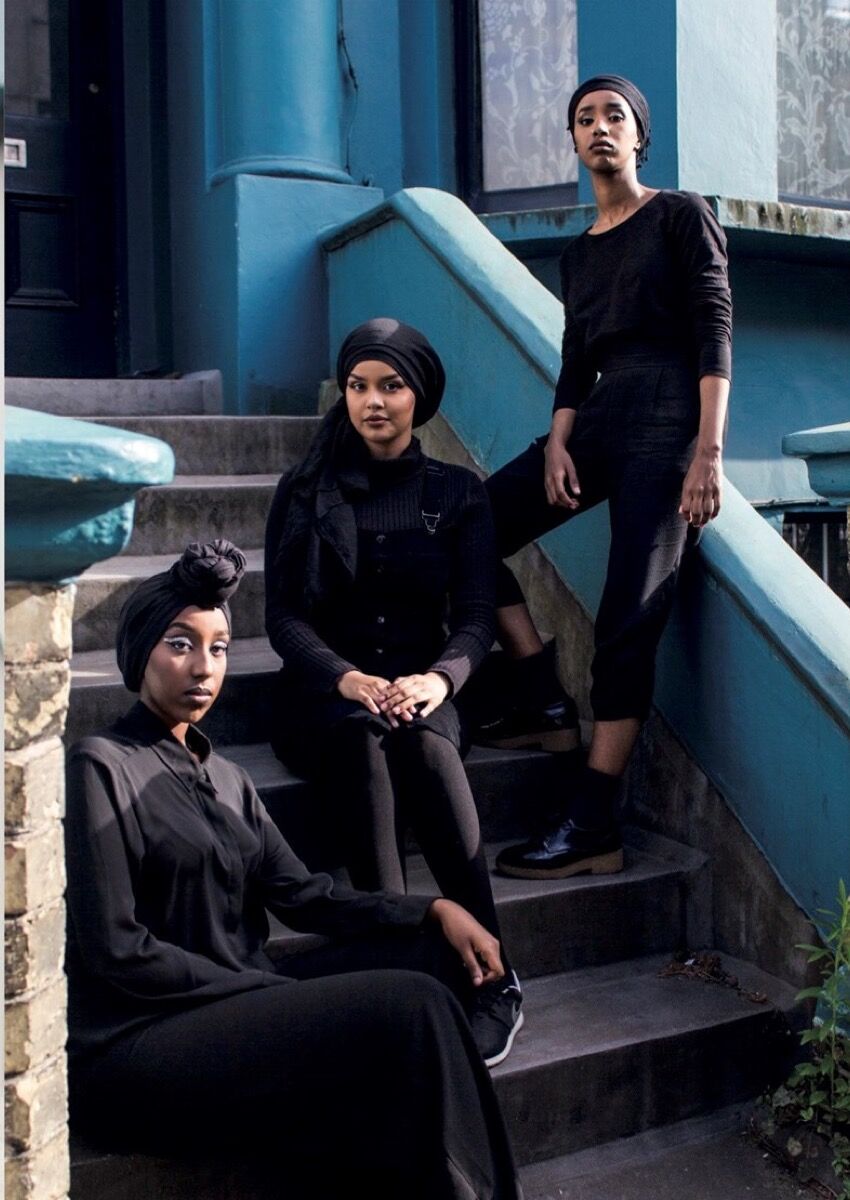 Once referred to as the “gal-dem bible,” this 250-page annual magazine functions as a platform for women of color to discuss everything from art and politics to feminism and everyday life. gal-dem is the brainchild of Liv Little, who had the idea for the collective while studying at the predominately white University of Bristol. Little was frustrated by the lack of representation of minority women in feminist conversations and sought to create a space for women and nonbinary people of color to share their own ideas, critiques, and experiences.
Since then, gal-dem has grown to a team of 16. Collaborating with over 70 women of color, gal-dem publishes content regularly on their site, hosts events throughout London, and even released their first print edition. Unlike other publications, gal-dem is run entirely by women of color, for women of color and seeks to challenge the homogenous narratives about them. Furthermore, gal-dem offers an opportunity for artists and writers whose ideas have been compartmentalized to explore their interests freely, not just in pieces pertaining to identity. “Our aim is to [create] a platform [for the] voices that the mainstream media and creative industries tend to sideline, pigeonhole, or ignore altogether,” editor Charlie Brinkhurst-Cuff explains. 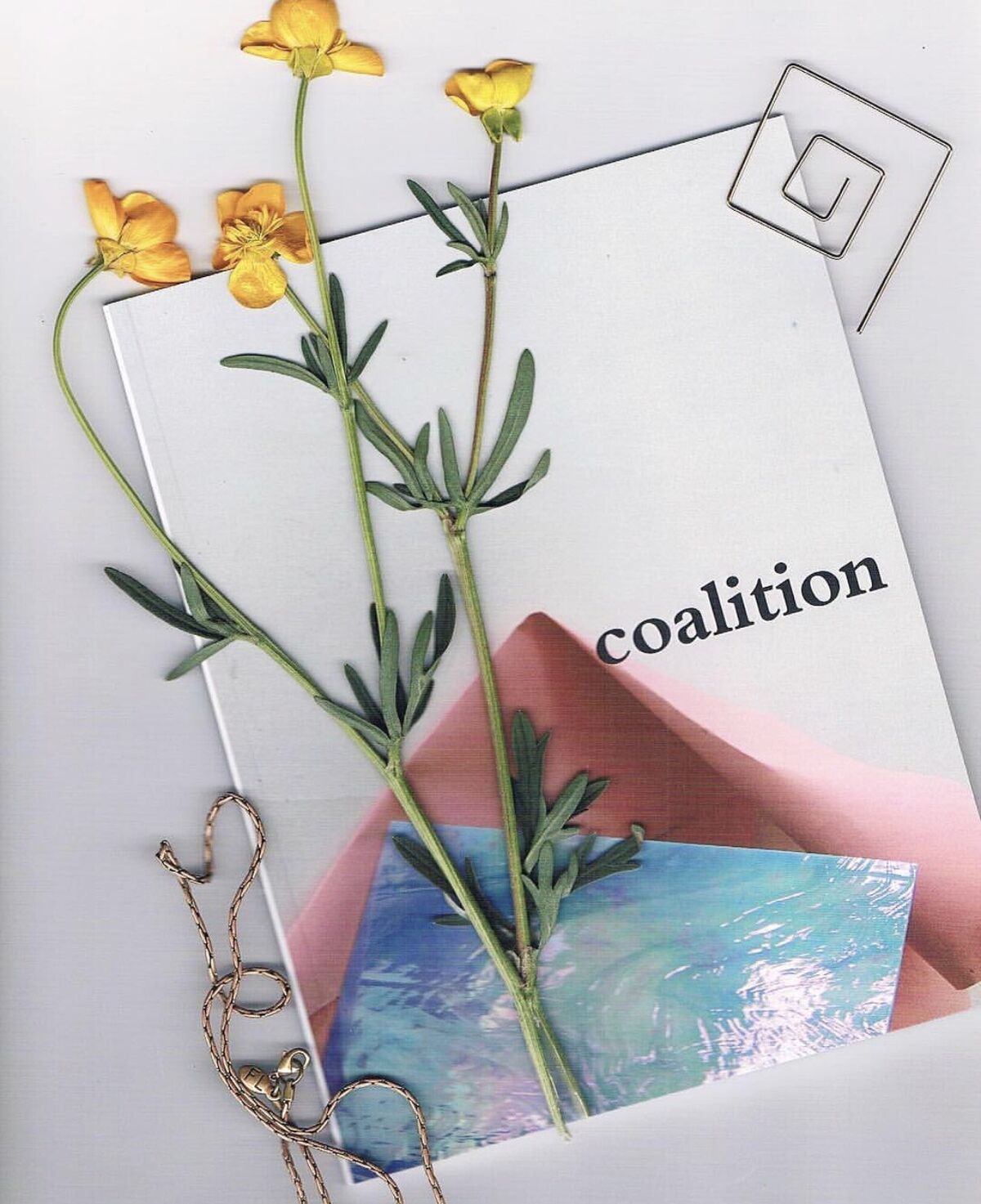 Image courtesy of The Coalition. 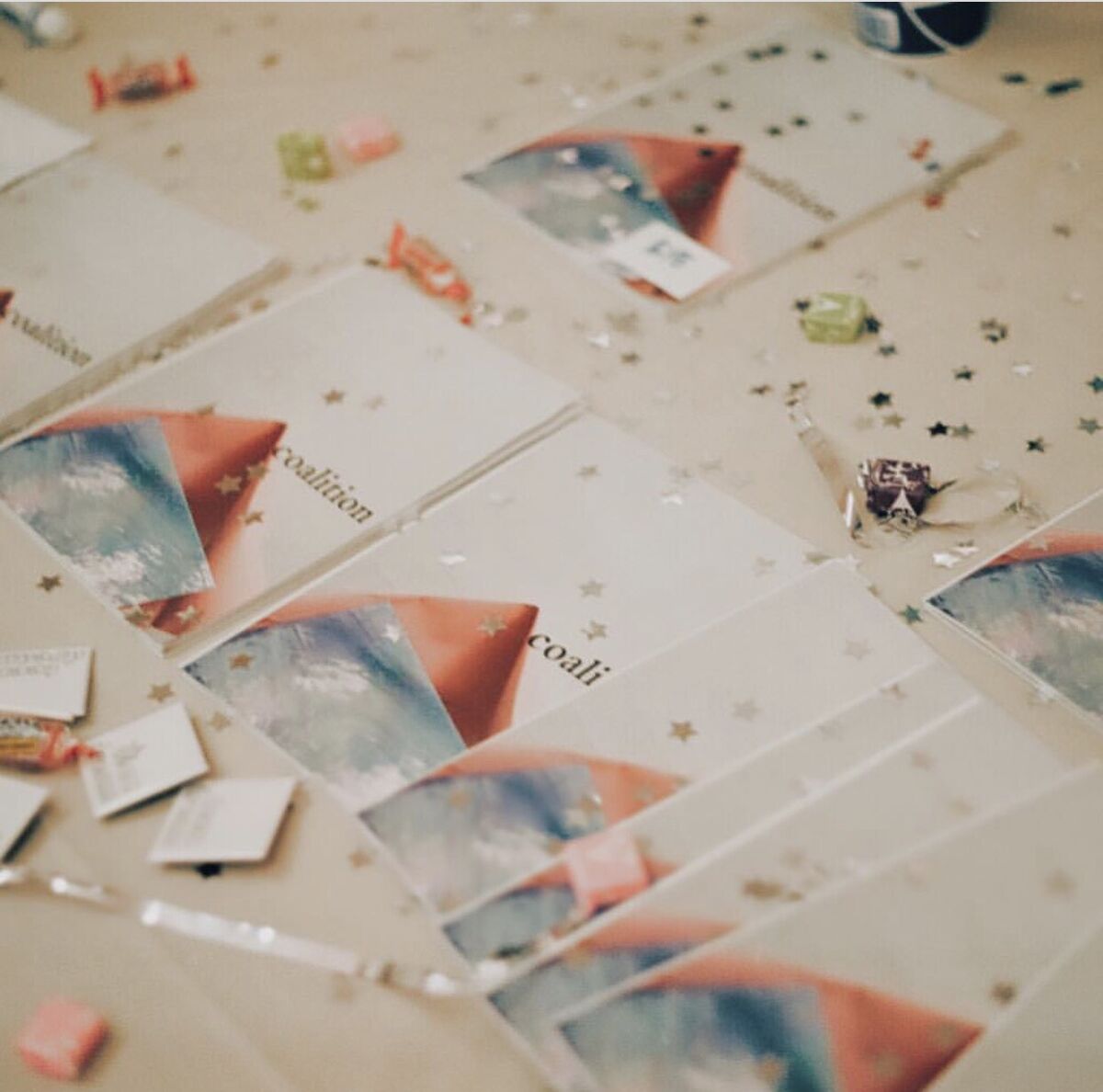 Photo by @crankocean, via Instagram. Image courtesy of The Coalition.

When The Coalition founder Fabiola Ching moved from her home in Cameroon to the United States, the pressure to assimilate—and the alienation the came with having foreign-born parents—made it difficult for her to find a place where she fit in. As a result, Ching spent much of her time nose-deep in books, taking solace in the stories she devoured. Her fascination with literature would eventually develop into the creation of her own platform for storytelling.
At age 16, Ching started The Coalition, an online and print literary zine that brings together femme identifying writers and artists of color to tell their stories. The idea for the publication grew out of Ching’s frustration with the lack of such narratives online and an absence of support in the independent literary world. Ching sought to create a community bolstered by shared experience.
“I thought it was not only a smart idea but a necessity to have a literary publication that a person like me or you could actually want to write for, with editors that get it and don’t just want to use you for your trauma and emotional labour,” Ching explains. Recently, The Coalition has brought its vision to video through a new series called “Workspaces.”
Yelena Keller
Related Stories