The 9 Best Booths at Independent Brussels

Molly Gottschalk
Apr 20, 2017 3:36pm
For the second year, Independent Brussels spreads across six floors of Brussels’s historic Vanderborght building this week, dotting the former 1930s department store’s modernist walls with tightly curated exhibitions. And like its New York counterpart, which this March hosted a second run at its glossy new Tribeca home, Spring Studios, this year, Independent Brussels truly spreads its wings.
Thanks to Independent’s year-round presence in Europe’s capital via the exhibition space it opened in 2016, Independent Régence, it has now cultivated a loyal following in the city. This, in addition to the fact that the fair’s inaugural edition last year took place shortly after the tragic March 22nd terror attacks at Brussels’s airport, led to a marked increase in attendance on opening day.
“Last year there were a lot of new elements; a new city, a new fair, we had the attacks four weeks before we opened,” said executive director Laura Mitterrand during the VIP preview. “It was really a fantastic edition,” she added, “but it was also a difficult time for everyone. This year feels very different.”
Over 70 galleries and nonprofits, from 32 cities, participate in Independent Brussels’s 2017 edition. Among them are returning blue-chip galleries, like Barbara Gladstone and David Zwirner, whose
Marcel Dzama
-curated stand arguably steals the show. Notable newcomers include Sprüth Magers, Capitain Petzel, and Mendes Wood DM, which opened a Brussels outpost in the city earlier this week, adding to locations in São Paulo and New York.
“Galleries are getting more and more excited about what they can do here, and making statements that they wouldn’t be making at other fairs or in other cities,” said Mitterrand. “It’s bringing [the fair] to a new level.”
Nine of those participating have transformed their booths into full-scale exhibitions, taking the fair to a new level indeed. 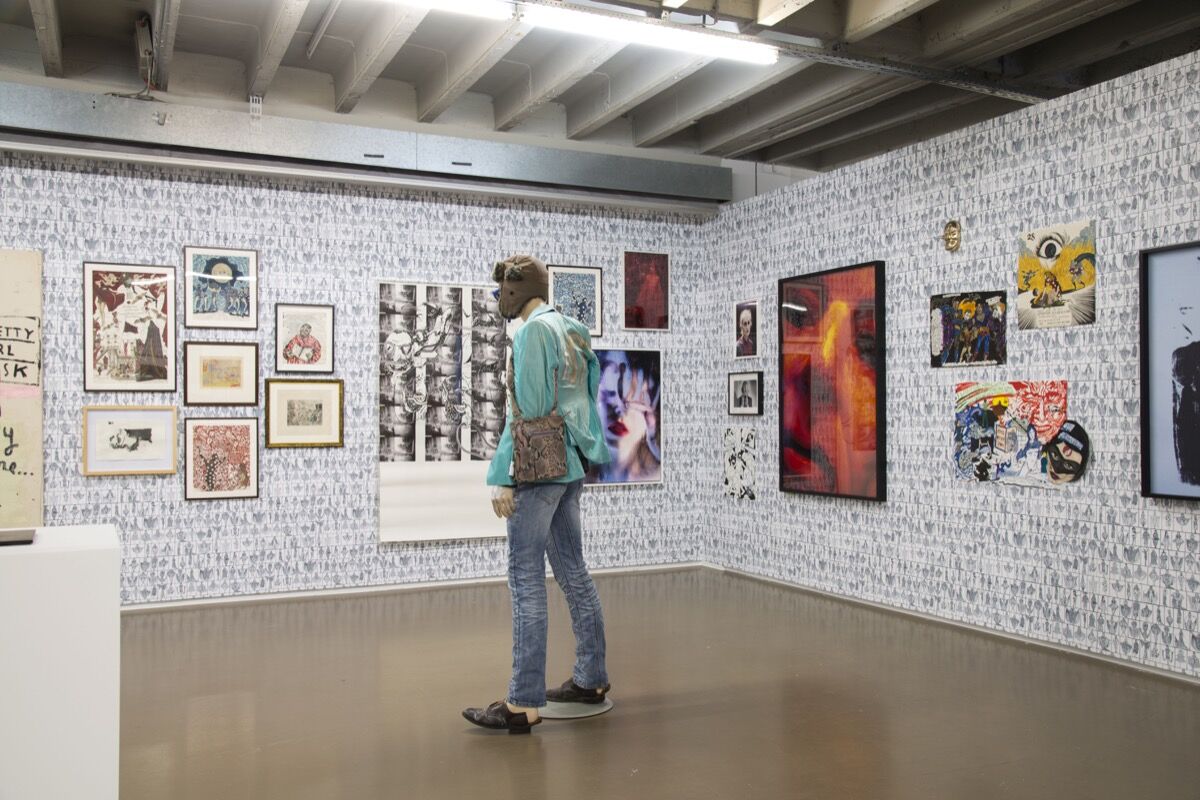 Guises of every ilk fill David Zwirner’s stand, where Marcel Dzama, the art world’s master of puppetry and masquerade, has curated a booth around the theme of the mask. Titled “The Mask Makers,” it draws from Dzama’s long history with the motif, which began in the mid-’90s and culminates in the elaborate fairy-tale costumes he designed for the New York City Ballet’s dancers last spring.
The affinity dates back much further, said Dzama, standing in the booth. “The earliest memory I can think of was when my grandmother bought me this Greek theater mask in Hawaii, that you could turn around to be happy or sad,” he said. Dzama was six years old at the time.
This particular presentation was inspired by 19th-century Belgian painter
James Ensor
’s Christ’s Entry into Brussels in 1889 (1888), which sees a sinister, encroaching mob populated by masks and caricatures. At Independent Brussels, Dzama’s own menagerie gathers work by nearly 30 artists—from frequent collaborator
Raymond Pettibon
to
Jordan Wolfson
to
Cindy Sherman
. Among the strongest are a penetrating portrait of a face-painted model by
Wolfgang Tillmans
, Eleanor / Lutz, portrait, (2016), and, a personal favorite of Dzama, a hand-colored print by Ensor himself.

With works by Austin Lee, Donna Huanca and Gabonese sculptures 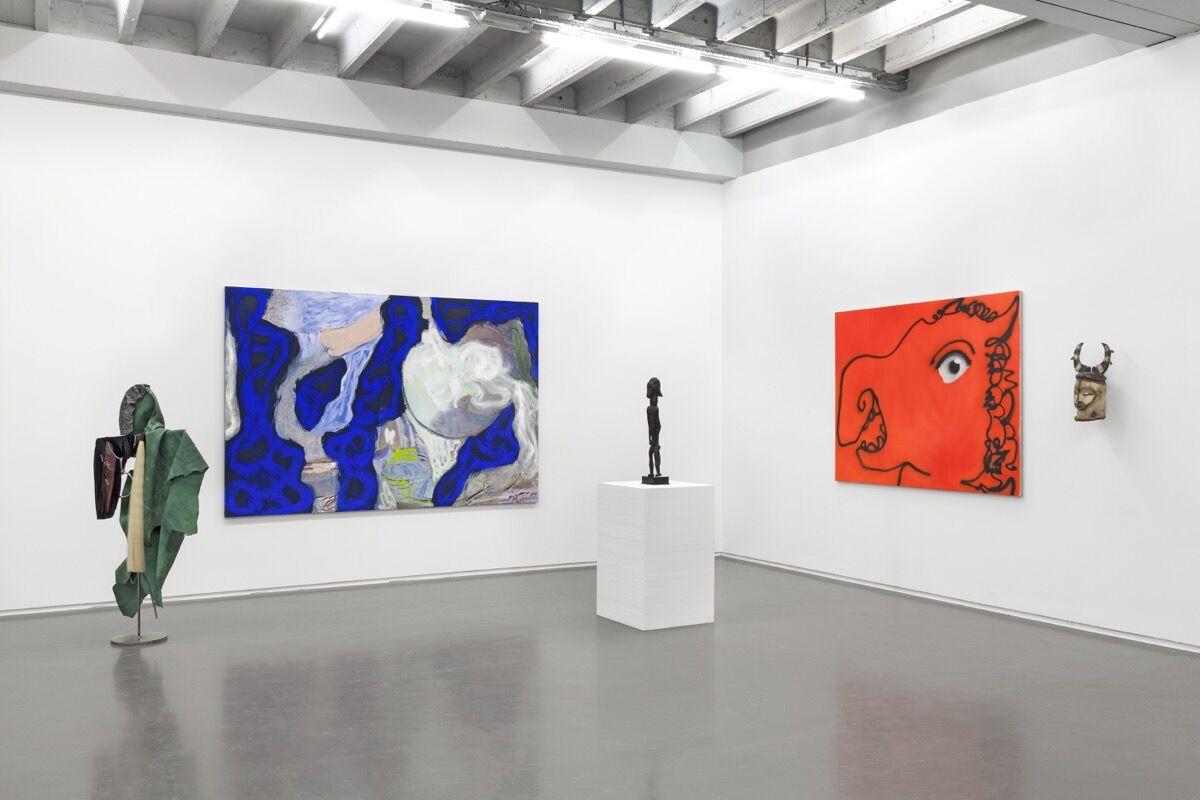 Advertisement
A 19th-century horned mask helmet from the Fang or Bulu people of Gabon and a Fang figure are not typical among Independent Brussels’s offerings, which skew decidedly towards
contemporary art
produced in the 21st century. The sculptures are nestled amongst the work of emerging artists
Donna Huanca
and
Austin Lee
at Peres Projects’s booth, which range in price from $20,000–$25,000.
The presentation, in part, taps into Belgium’s long-standing as a center for antiquity and
classic African art
. But it also pulls from Javier Peres’s own passion for tribal art, and is an effort to connect these young artists to the wider art-historical backdrop in which they operate.
“A lot of people who are making work today looking at modernism don’t look at that extra step to classic African art,” said gallery partner Nick Koenigsknecht. The gallery’s past two summer shows have addressed this topic, pairing classic African art with abstraction or figuration. Koenigsknecht said the juxtaposition between Lee’s
figuration
and the mask, which hangs to its right, “gives me goosebumps.”

With works by Runo Lagomarsino 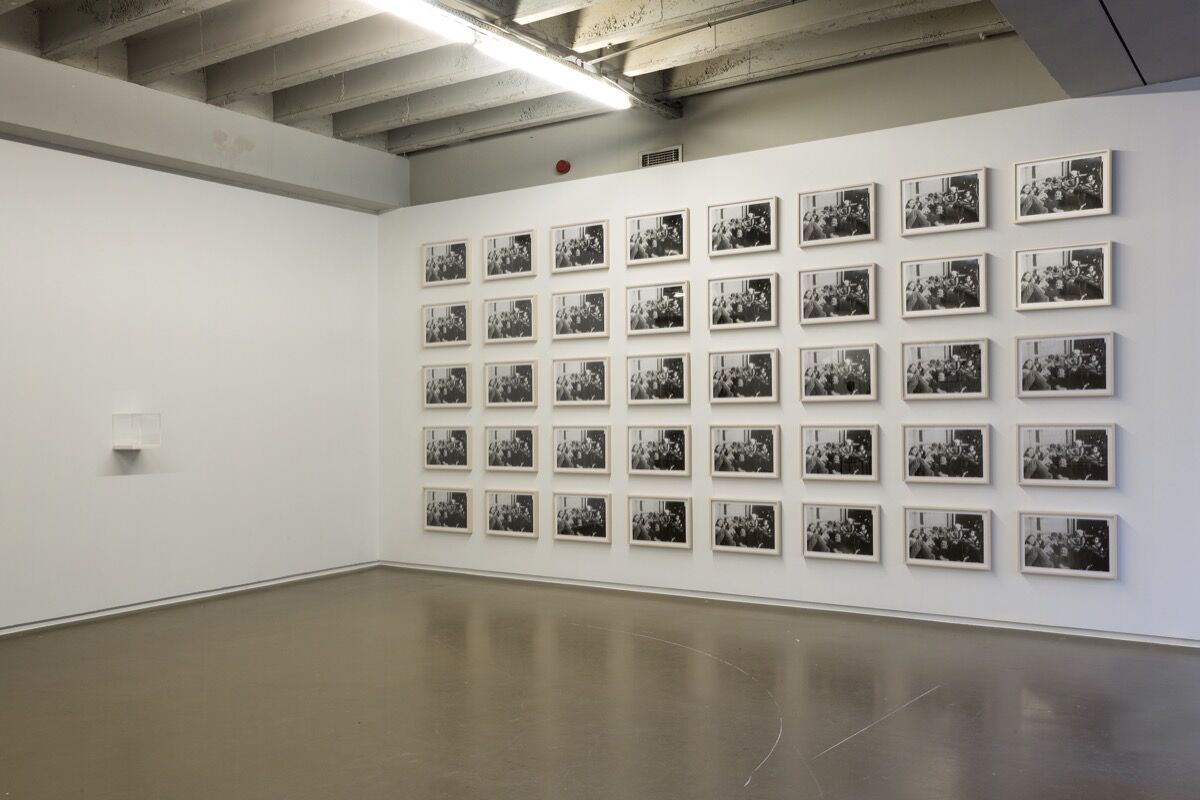 São Paulo’s Mendes Wood DM is the center of attention this Brussels art week thanks to its new location on the city’s Rue des Sablons. The new space opened its doors with an over 40-artist exhibition curated by Fernanda Brenner, director of the acclaimed São Paulo nonprofit Pivô. Marking the exhibition’s entrance is a giant work by Swedish-Argentinian artist
Runo Lagomarsino
—who also claims an entire wall of the gallery’s booth at Independent Brussels.
The solo installation (priced at $35,000) comprises 40
identical
black-and-white photographs, each of which is a reproduction of a single image of the artist’s mother, father, and sister aboard a ship in 1976. They are a family caught in exile, fleeing Argentina for Spain following the year’s coup d’etat, just one year before Lagomarsino was born.
“His work is all about borders, countries, colonization, and
globalization
,” said gallery director Magê Abàtayguara of the show, which she admits finds particular resonance in today’s political climate. It could explain why Lagomarsino has a slew of upcoming shows lined up in the United States in the coming months.

With works by Ryan Gander, Mario García Torres
The artistic practices of
Ryan Gander
and
Mario García Torres
, who happen to be good friends, come to a playful collision in a collaborative booth by Paris’s gb agency and Brussels and Mexico City’s Jan Mot. “The work is about the limits of art and everyday life,” said gb agency’s Julien Bouharis.
One piece, from afar, appears to be framed art-historical monochrome; on closer inspection, the single-colored sheet mimics an LSD blotting paper, complete with perforation marks. Other highlights include a telegram mailed by García Torres to his gallery (“I BET THIS WON’T ARRIVE ON TIME FOR THE SHOW = IF IT DOES, IT CAN BE PRESENTED AS A WORK OF ART  = IF IT DOESN’T, IT SHOULD REMAIN A TELEGRAM”) and an open cardboard box filled with
Le Corbusier
’s colored, monochrome paper swatches, “like leftovers of modernity,” said Bouharis.

With works by Daniel Dewar and Gregory Gicquel 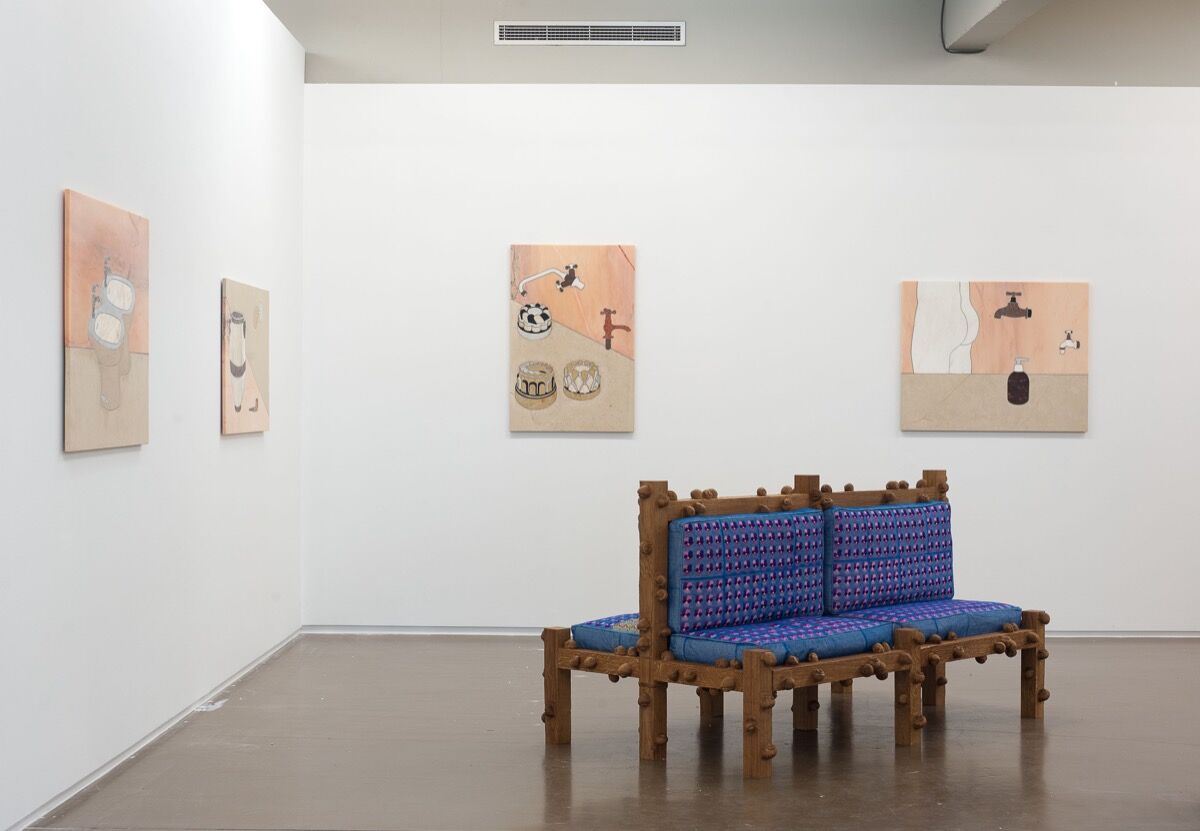 On Wednesday night,
Daniel Dewar and Grégory Gicquel
’s work debuted in “The Absent Museum,” a large-scale exhibition that marks WIELS Contemporary Art Centre’s 10th anniversary. Earlier the same day, Cologne’s Jan Kaps debuted a solo booth featuring a stunning series of wall sculptures by the artist duo.
The four works, priced at €13,000 apiece, are carved from pink aurora marble the artists imported from Portugal, and picture mass-produced objects—vessels, toilets, even a
Magritte
-reminiscent pipe. The booth’s centerpiece is a decoratively carved couch, priced at €23,000 excluding VAT, inspired by a farm near Versailles. 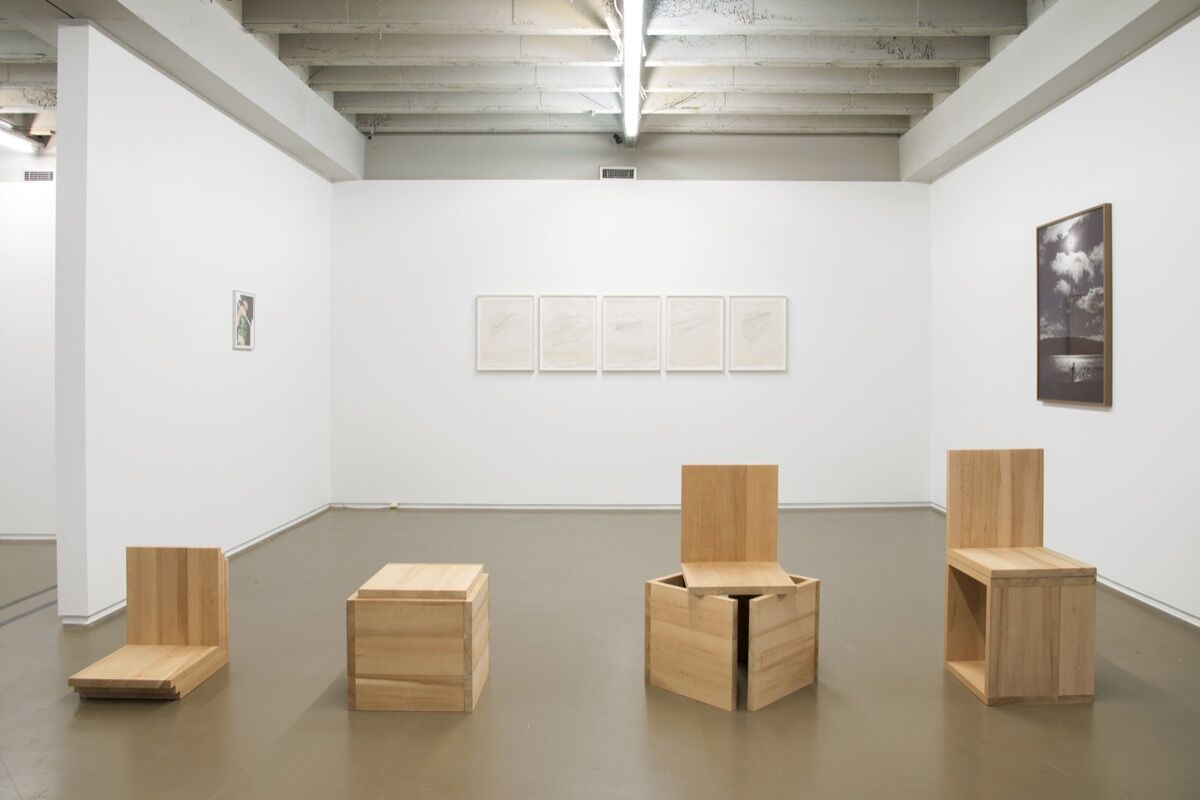 Madrid and Guadalajara’s Travesia Cuatro has loosely focused its booth around drawing and literature. A giant pencil drawing by Mexican artist
Jorge Méndez Blake
, which sold for $80,000 during the preview to a Spanish-American collector, sees a lush forest with a bookcase at its center. At the booth’s center, a four-piece sculpture by
Mateo López
imagines the act of drawing four different types of chairs.
In addition to a series of drawings by
Elena del Rivero
—for which she wrote the words of Russian poet Marina Tsvetaeva with her eyes closed ($12,000 apiece)—the booth’s most striking work is a photograph by
Gonzalo Lebrija
taken during an eclipse in Mexico. 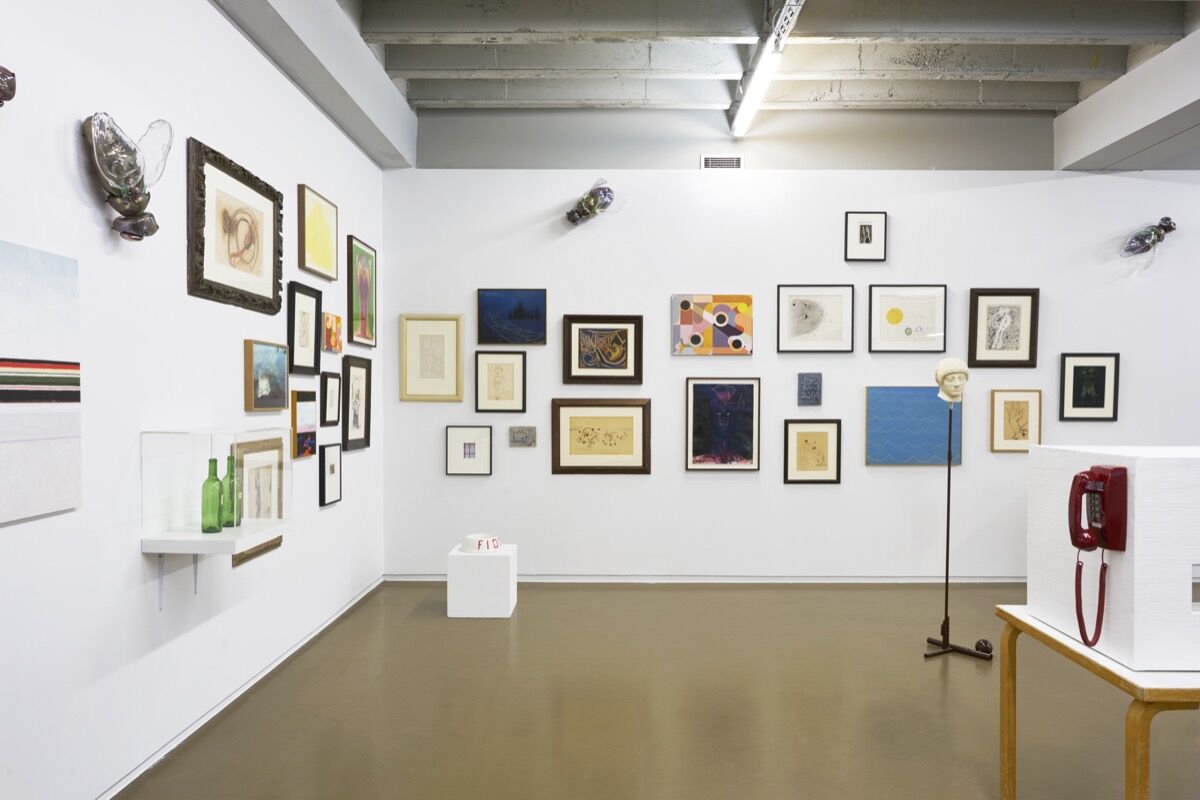 C L E A R I N G, which has the Brussels art world gushing over the new 5,400-square-foot gallery it opened in the European capital on Tuesday, is also attracting its share of attention at Independent Brussels. In addition to a booth of work by
Aaron Garber-Maikovska
, the gallery took a second booth for its first-ever collaborative presentation, teaming up with Galerie 1900-2000 to each pick works from the other’s program.
“We represent almost exclusively young artists and they represent incredibly established, legendary artists,” says C L E A R I N G’s Max Bushman. “We’re really breaching our previous constraints, which are very much for the contemporary market.”
The resulting booth, hung salon style, sees everything from
Man Ray
’s 1926 portrait of
André Breton
’s first wife and muse Simone Kahn, to drawings by
Francis Picabia
, to work by nearly every artist C L E A R I N G  represents—
Harold Ancart
,
Koenraad Dedobbeleer
, and
Jean-Marie Appriou
among them. 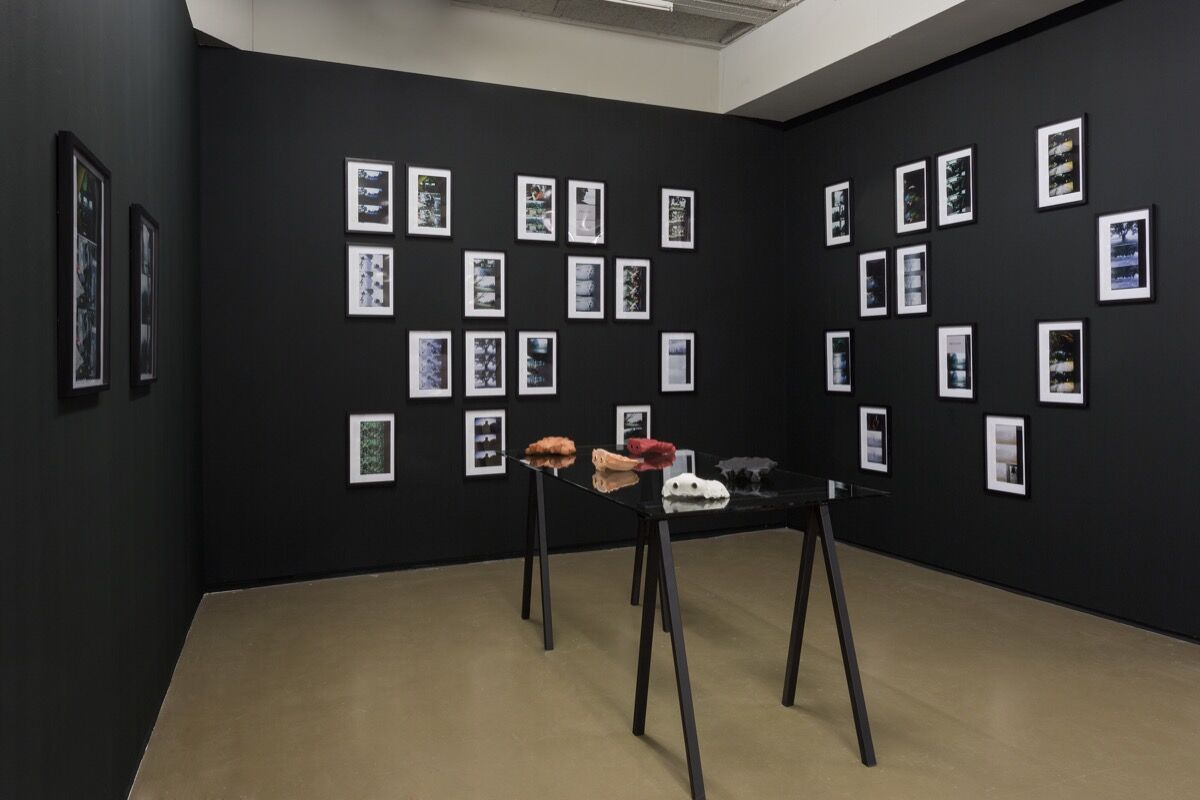 This two-person booth by Nina Johnson looks at the way we remember places. At its center, sculptures by
Nicolas Lobo
, on offer for €2,800 apiece, loosely take the form of goggles. While they recall the iconic, pre-digital Viewmaster toy, they’re in fact based on 3D scans of a cave interior in northern Florida and preserve a memory of that place.
The surrounding walls are filled with previously unseen film strips by
Jonas Mekas
, clips from a series he shot at American psychologist and psychedelic therapy advocate Timothy Leary’s house in Millbrook, Connecticut, in 1965, for his seminal diary-filmwork Walden (1969). The works are on offer as a series of 28 for €56,000, with other individual works available for €4,600 apiece.
“It’s a
nostalgic
view of the countryside,” said Johnson, “a dreamlike version of what may or may not have been the reality of the place.” To create the work, Mekas mines his old film for images, “thinking of film as an object,” she said. The presentation precedes the 94-year-old photographer’s showing next month at Adam Szymczyk’s documenta 14 in Kassel, Germany.

With work by Wesley Willis 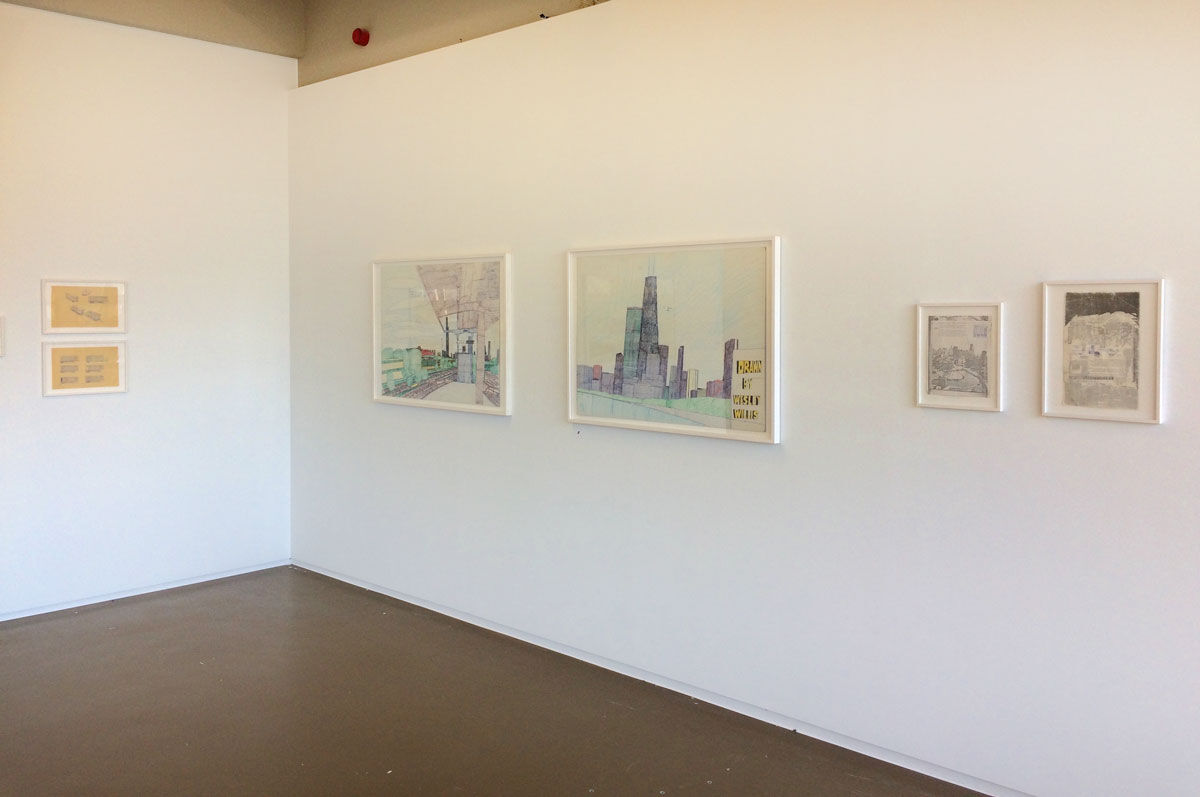 If you caught the gallery’s fantastic booth at Independent New York in March, featuring drawings by anonymous artist Disko Girls, it may be little surprise to see they’ve again selected works around the theme of music, to great success.
The booth features the intricate drawings of cult American rockstar Wesley Willis, who passed away in 2003, in which he rendered Chicago’s streets, skylines, and music scene in bic ballpoint pen and felt-tip marker (and the occasional crayon) for some two decades.
Molly Gottschalk is Artsy’s Lead Visuals Editor.
Related Stories