9 Booths Not to Miss at New York’s ADAA 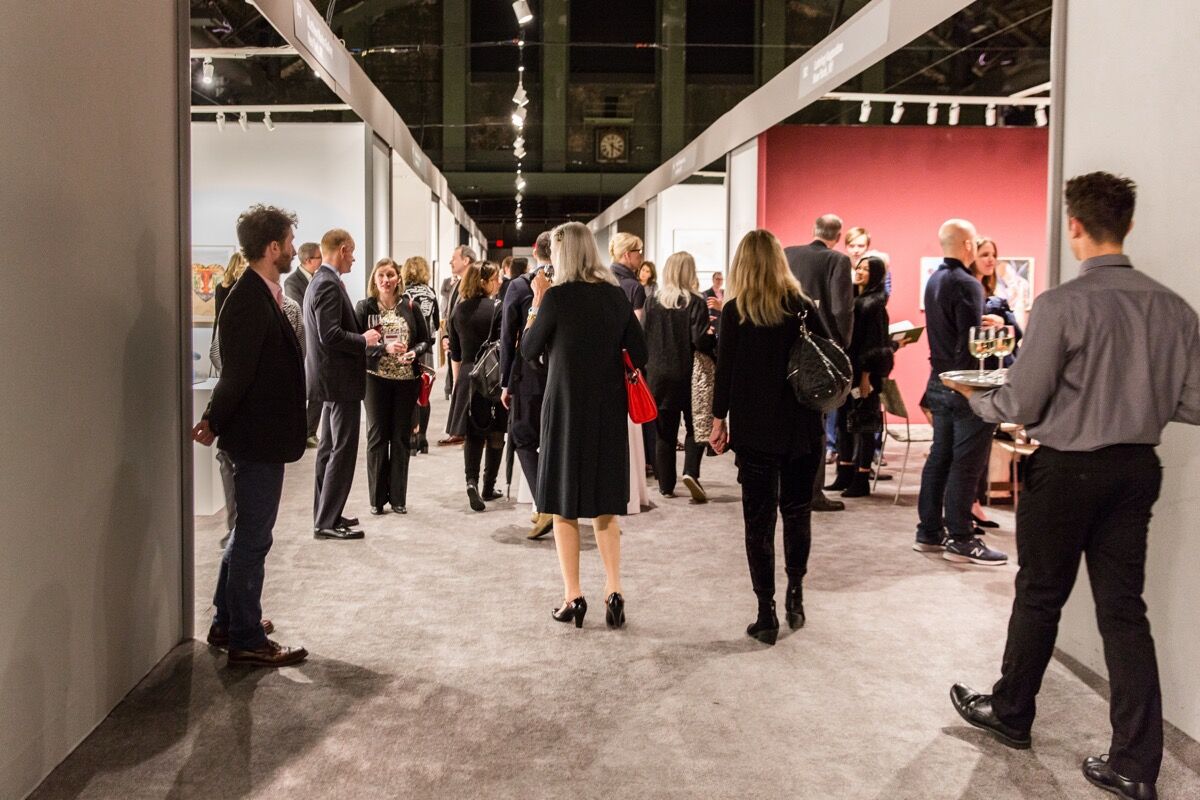 ADAA: The Art Show, the quieter, more intimate fair that runs alongside The Armory Show, opened on Tuesday night at New York’s Park Avenue Armory. In its 29th edition, the fair features 72 galleries from across the United States as well as art spanning some two centuries. This year’s fair is particularly strong in its representation of female artists associated with the 1960s and ’70s—including a gorgeous solo booth dedicated to
Michelle Stuart
at Leslie Tonkonow, works by
Betty Tompkins
at P.P.O.W. and Pilkington-Olsoff Fine Arts, Inc., and a duo booth given over to the works on paper of pioneering abstractionists
Jay DeFeo
and
Lee Bontecou
at Marc Selwyn Fine Art.
The fair also features bold presentations of new work by big-name European artists
Olafur Eliasson
, who addresses the environment through paintings and a sculpture created with ice at Tanya Bonakdar, and
Chris Ofili
, who shows complex paintings that integrate the faint silhouettes of human bodies with rich patterns at David Zwirner. Among strong offerings from artists south of the border, Galerie Lelong is showing Cuban artist
Zilia Sánchez
, while Alexander Gray Associates has collaborative works by German-born Uruguayan artist
Luis Camnitzer
and The New York Graphic Workshop on view.
Adam Sheffer, president of the Art Dealers Association of America (ADAA), noted that this interest in Latin American art is consistent with what we’ve seen across the art world at large, as the Met Breuer prepares for a retrospective of Brazilian artist
Lygia Pape
and the MoMA readies itself for a major gift from the stellar collection of Latin American art at the Colección Patricia Phelps de Cisneros (CPPC).
With a stellar selection across the fair, a number of presentations stood out from the rest. Below, we bring you artists and booths you shouldn’t miss. 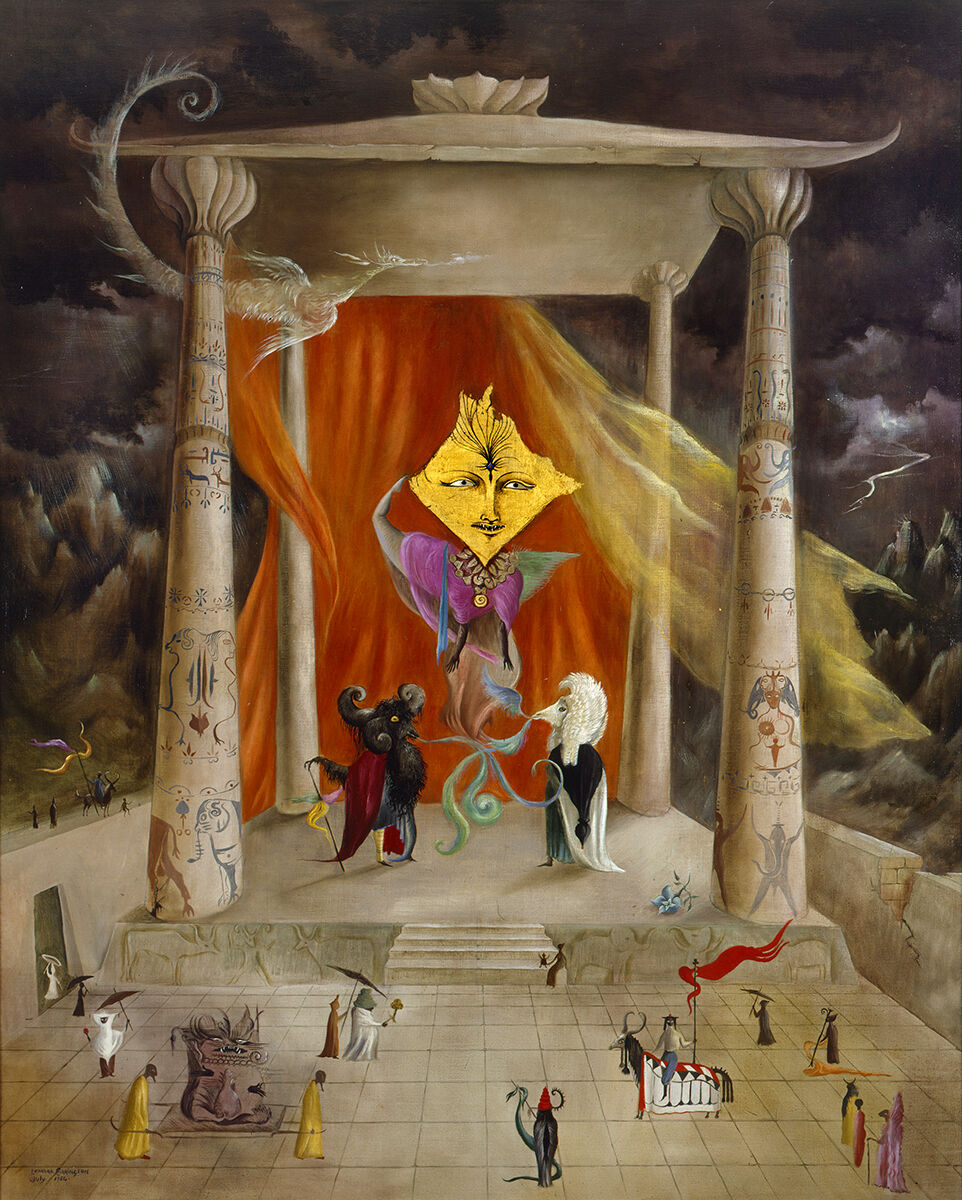 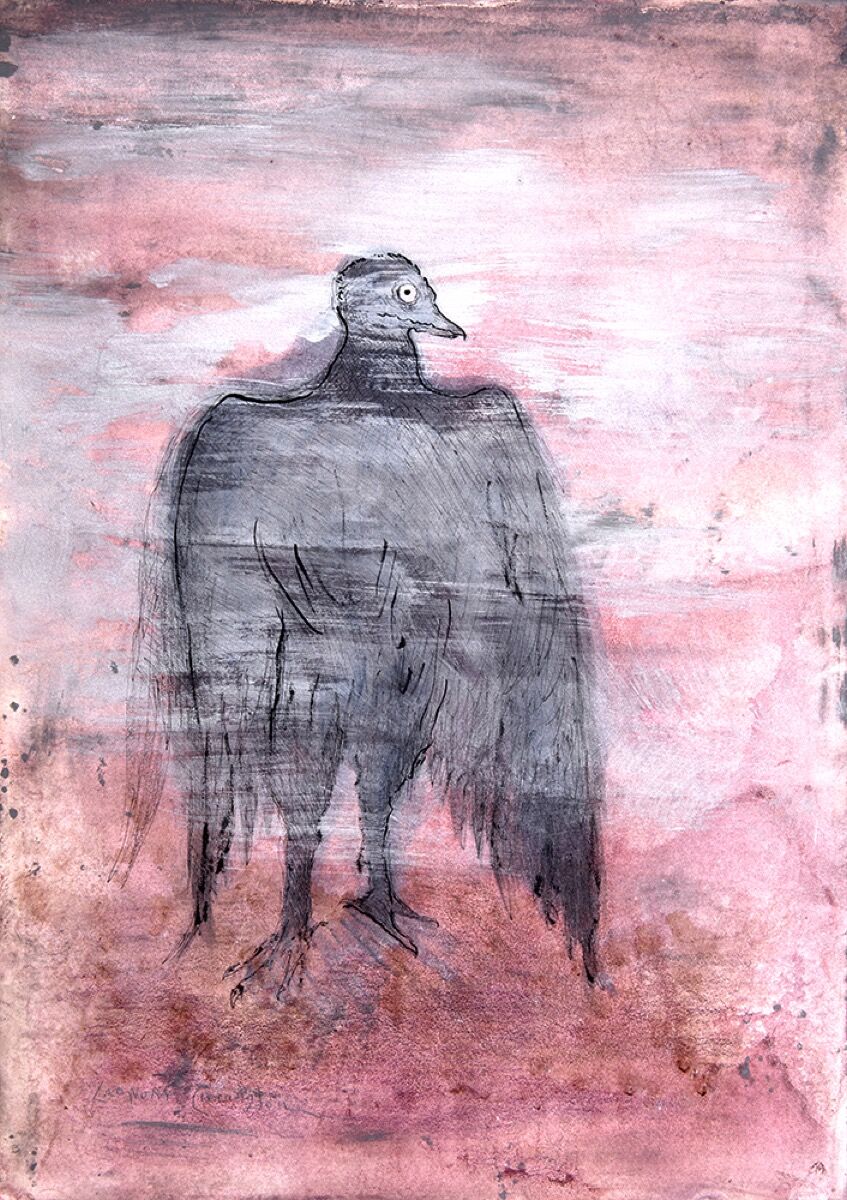 Latin American art specialist Mary-Anne Martin is showcasing an extraordinary, surrealist work by
Leonora Carrington
. In it, a diamond-headed deity appears to lord over an ancient temple that is embossed with hieroglyphs and suspended amid a stormy landscape. A British-born Mexican artist, Carrington was part of
André Breton’s
surrealist cohort and was once the partner of the painter
Max Ernst
. She was also a close friend of the artist
Remedios Varo
, who advanced her interests in myth and the occult. Carrington’s work is displayed alongside elegant, intricate works by modernist Uruguayan-Catalan pioneer
Joaquín Torres-García
and a glowing composition by Mexican painter
Rufino Tamayo
, among others. 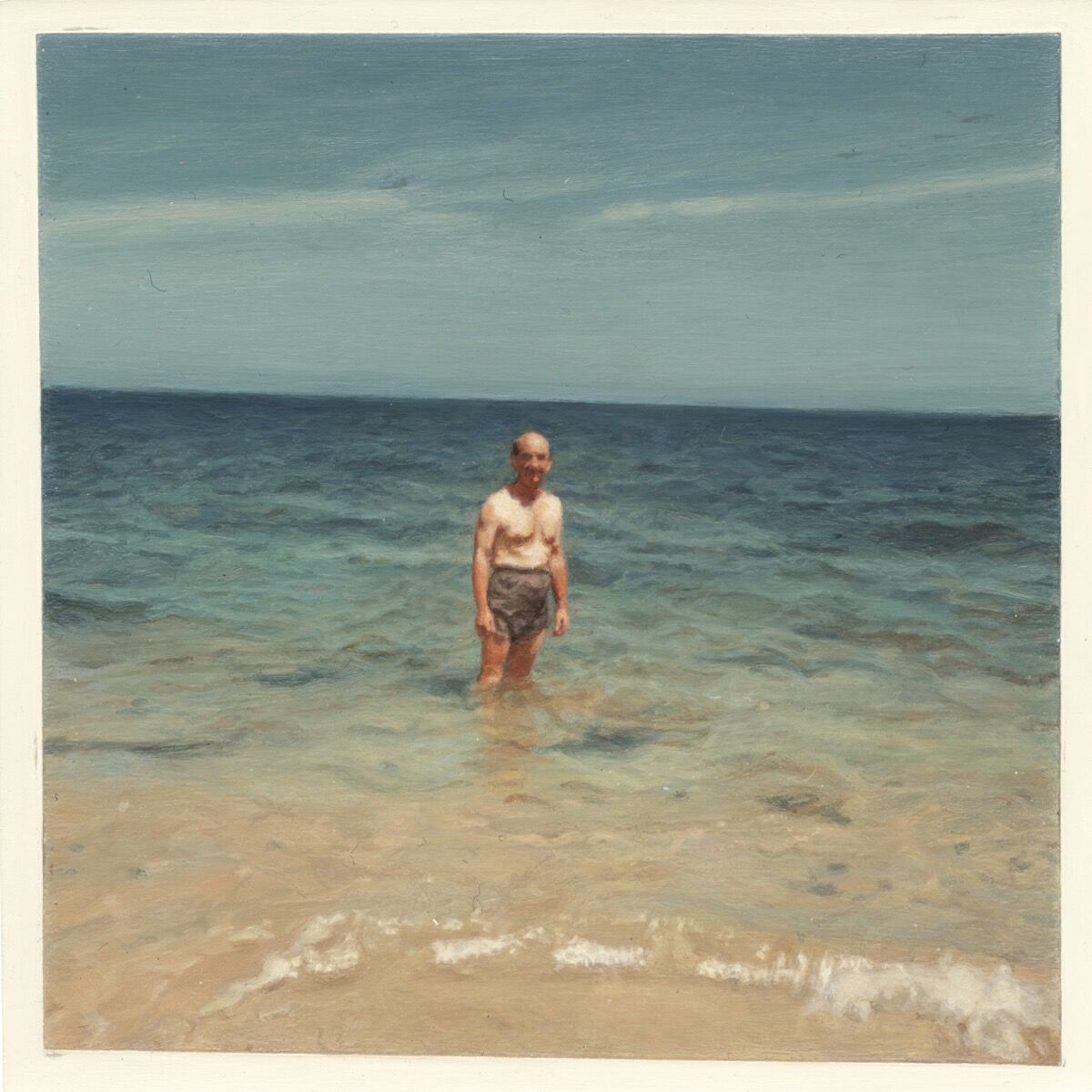 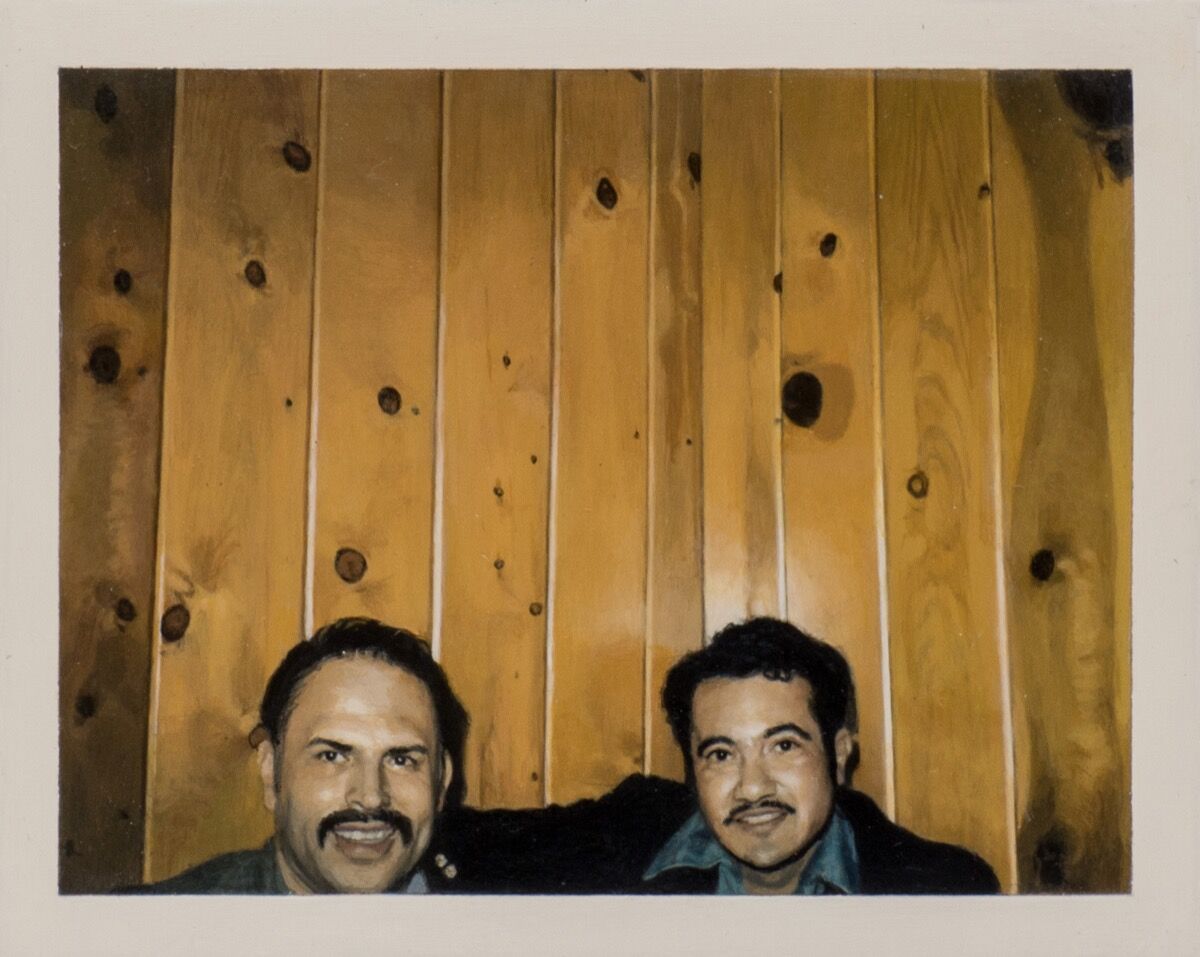 Advertisement
Step inside Fraenkel Gallery’s booth and you’ll discover what appear to be miniature family photos, almost small enough to fit inside a brooch or pendant. A closer look reveals they are in fact tiny paintings based on found photos, which artist
Elisheva Biernoff
recreates in meticulous detail—down to the notes, in pencil cursive, inscribed onto their backs. These works represent a project the artist has been engaged in over the past three years, with each miniature taking two or three months to create. Biernoff is drawn to images with unusual compositions as well as those featuring emotionally candid moments in strangers’ lives, which she pays homage to through the act of careful reproduction. 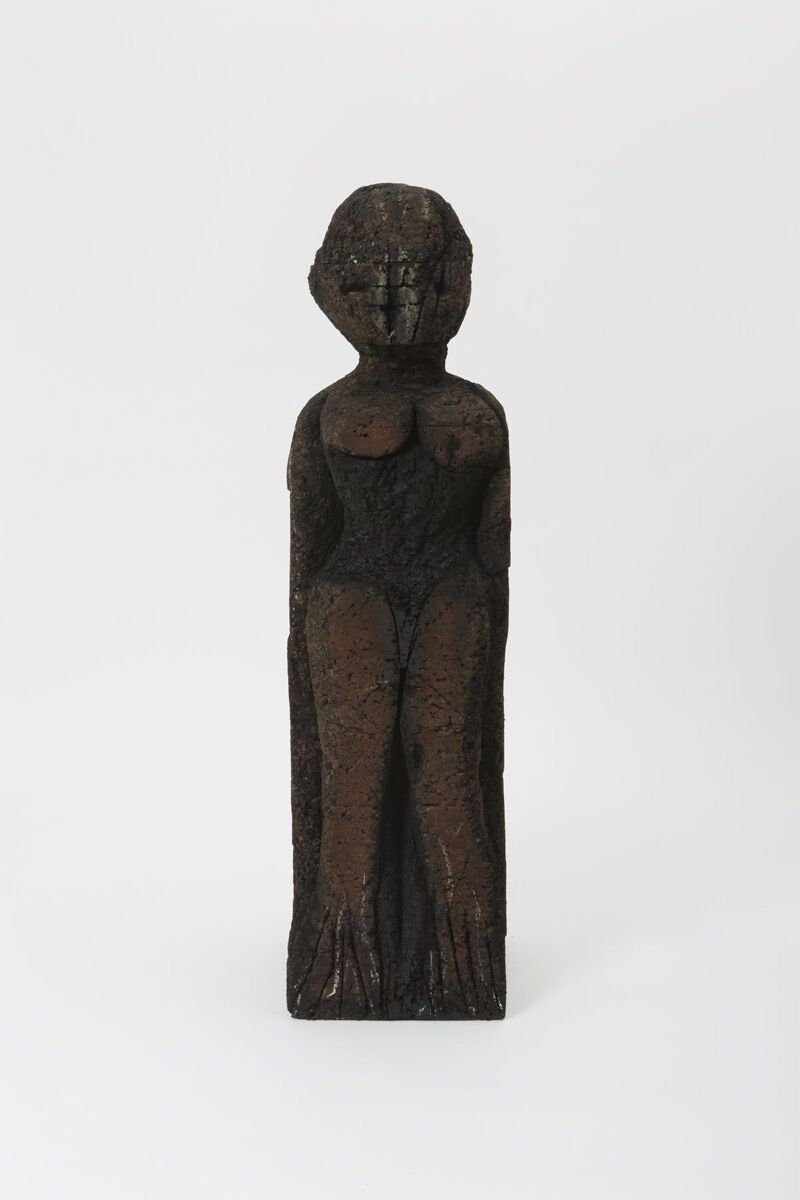 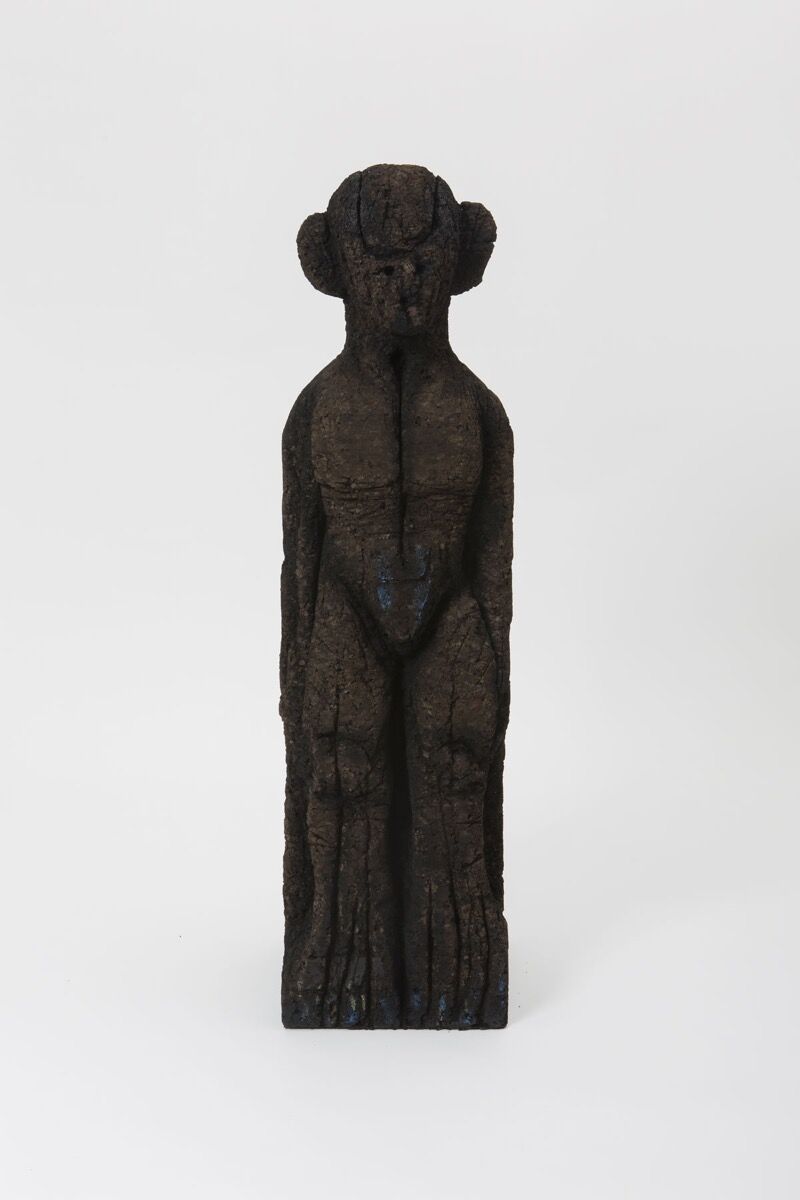 Standing like sentries on either side of Salon 94’s booth, sculptor
Huma Bhabha
’s totemic cork figures are accompanied by prints of heads in various shades, each seeming to metamorphose between human, beast, and alien forms. Bhabha is known for her monumental sculptures that recall tribal artifacts fused with science fictional monsters. These hybrid creatures are inspired as much from pop culture as they are from African sculpture and figurative statues from antiquity. Across the booth, these figures and the accompanying prints are all new and priced on the range of $2,500-100,000. 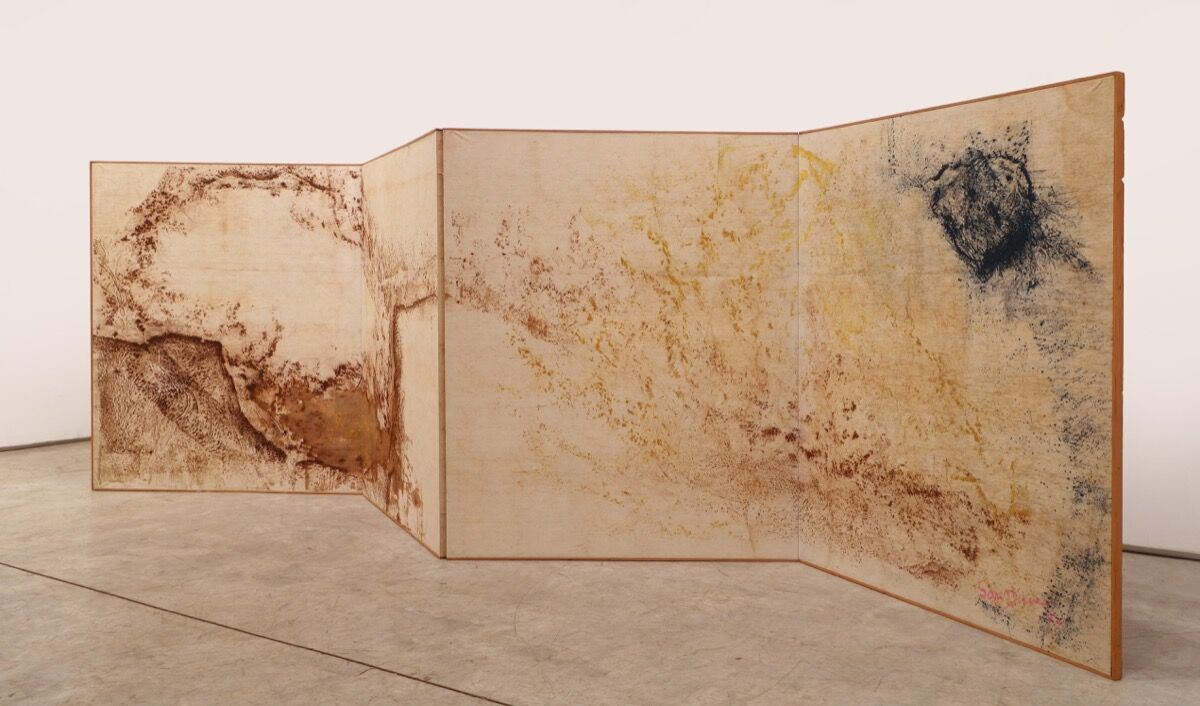 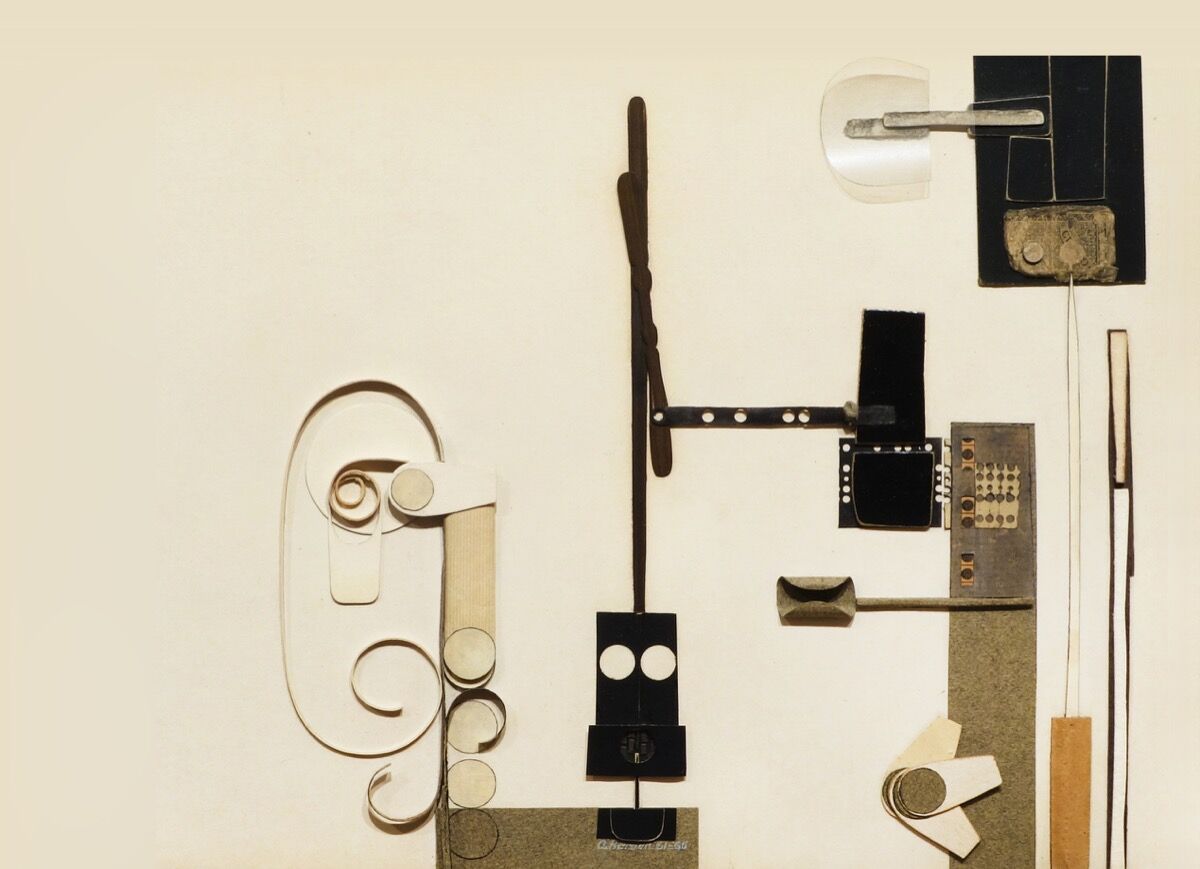 At Pavel Zoubok’s booth,
Sari Dienes
’s beautiful, elegant screen titled Central Park (c. 1954) looks like it’s stitched with delicate, colorful patterns or decorated with dust. In fact, it is the result of the late artist’s careful frottage process, which she used for much of her work. A Hungarian artist who was born in the 19th century, she studied under the artists
Fernand Léger
and
Henry Moore
, among others, in Paris and London. She would eventually end up in New York, where she created rubbings of the manhole covers in the street, and elements of the natural world—examples of which also appear in the booth. Alongside her work,
Addie Herder
’s intricate collages, some of which she called “machines,” are equally mesmerizing. 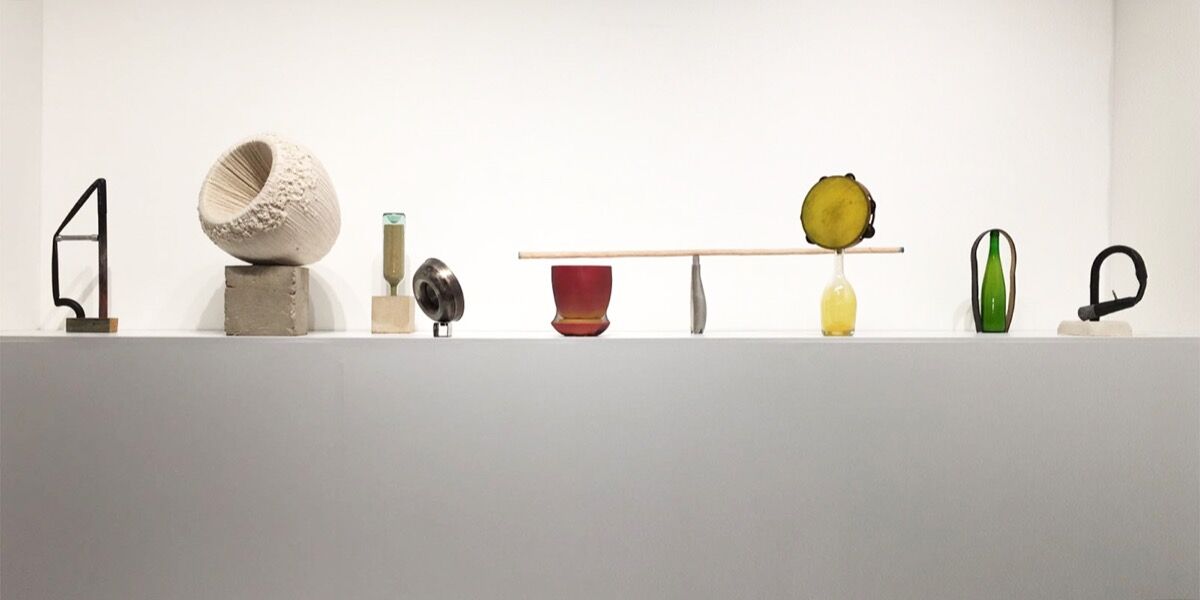 At CRG Gallery, Brazilian artist
Alexandre Da Cunha
has an irresistible array of shaggy wall compositions made of mop heads as well as a tableau of smaller works—playful constructions composed of industrial materials, refuse, and found objects. A drum-like form wrapped in knitting wool perches atop a block of concrete; a tambourine turned on its side sits on the head of a glass bottle to form an anthropomorphic sculpture. “They’re almost like drawings,” gallery director Richard Desroche says of the sculptures, which, together with the mop works and a giant metal urn, are on sale for between $10,000 and $55,000 a piece. 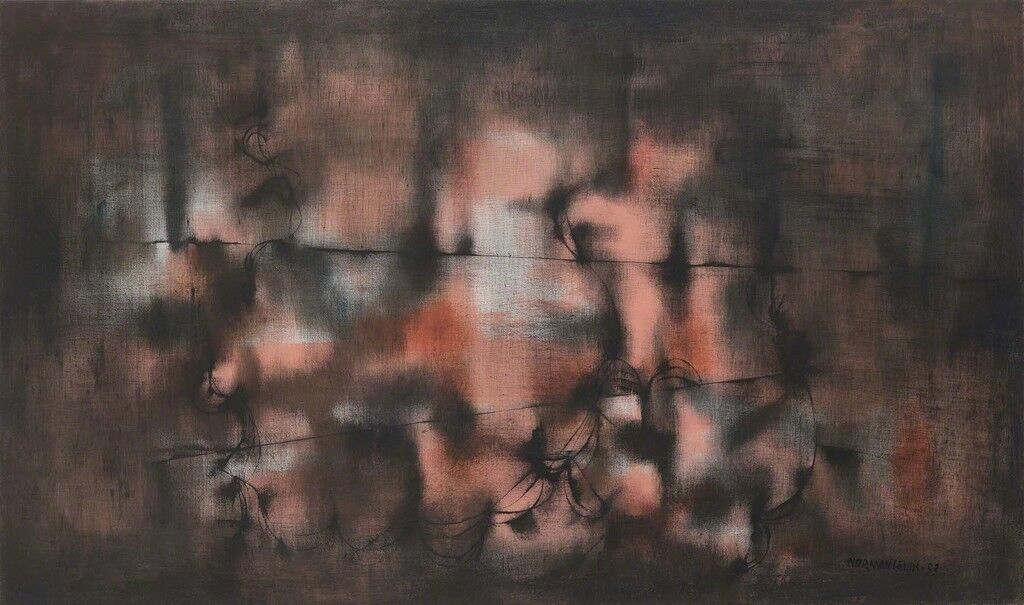 Norman Wilfred Lewis
Orpheus, 1953
Michael Rosenfeld Gallery
Michael Rosenfeld has given over a whole booth to the paintings and works on paper of the important Abstract Expressionist painter
Norman Lewis
, who has on view, among other works, abstract line drawings that resemble topographies laced with gold. This spare, agitated line, which the artist would smudge with a finger or brush, was typical of his work in the 1950s. He was inspired, a gallery associate said, by the form of winter branches and the houseplants that he kept in his home. In wide paintings also on view in the booth, anonymous figures appear to emerge from the atmospheric space of the canvas. 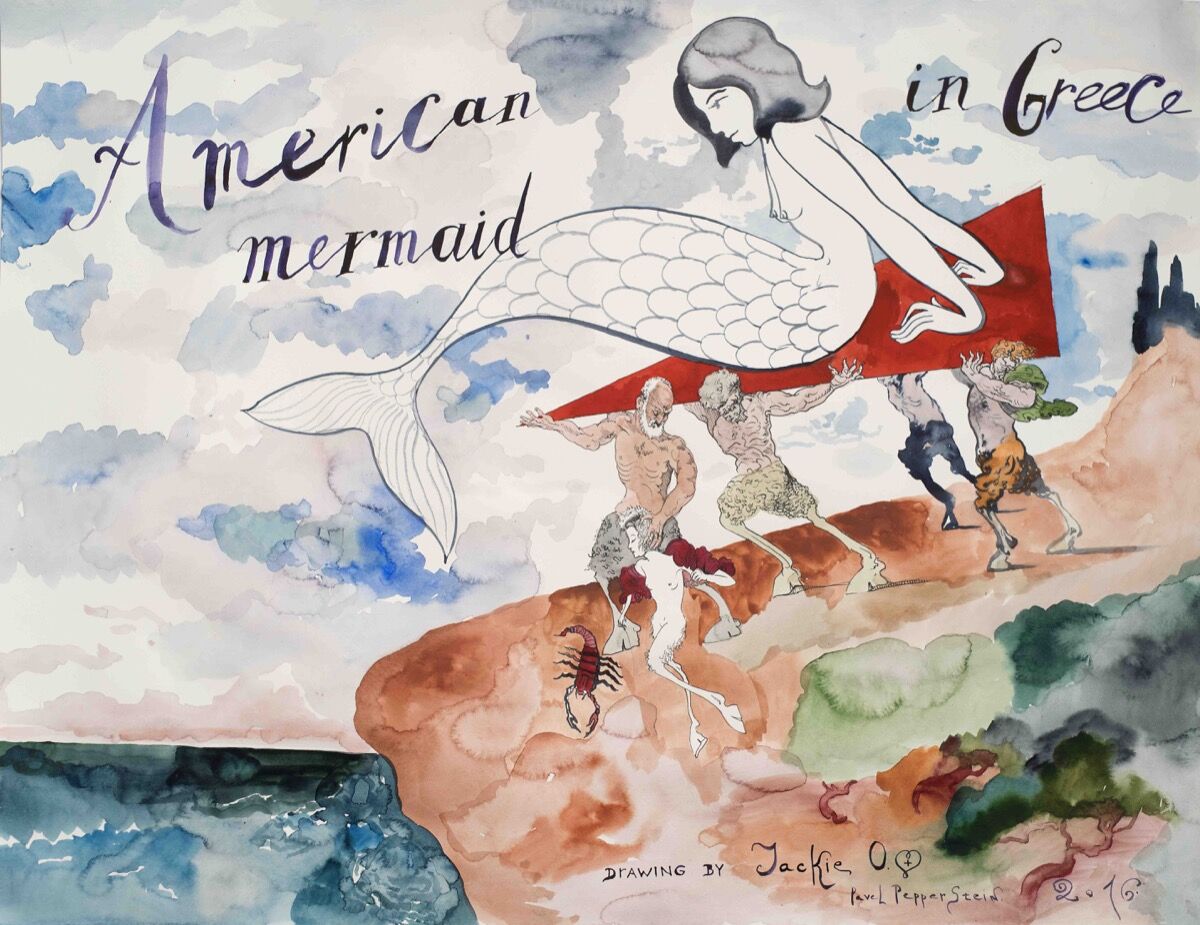 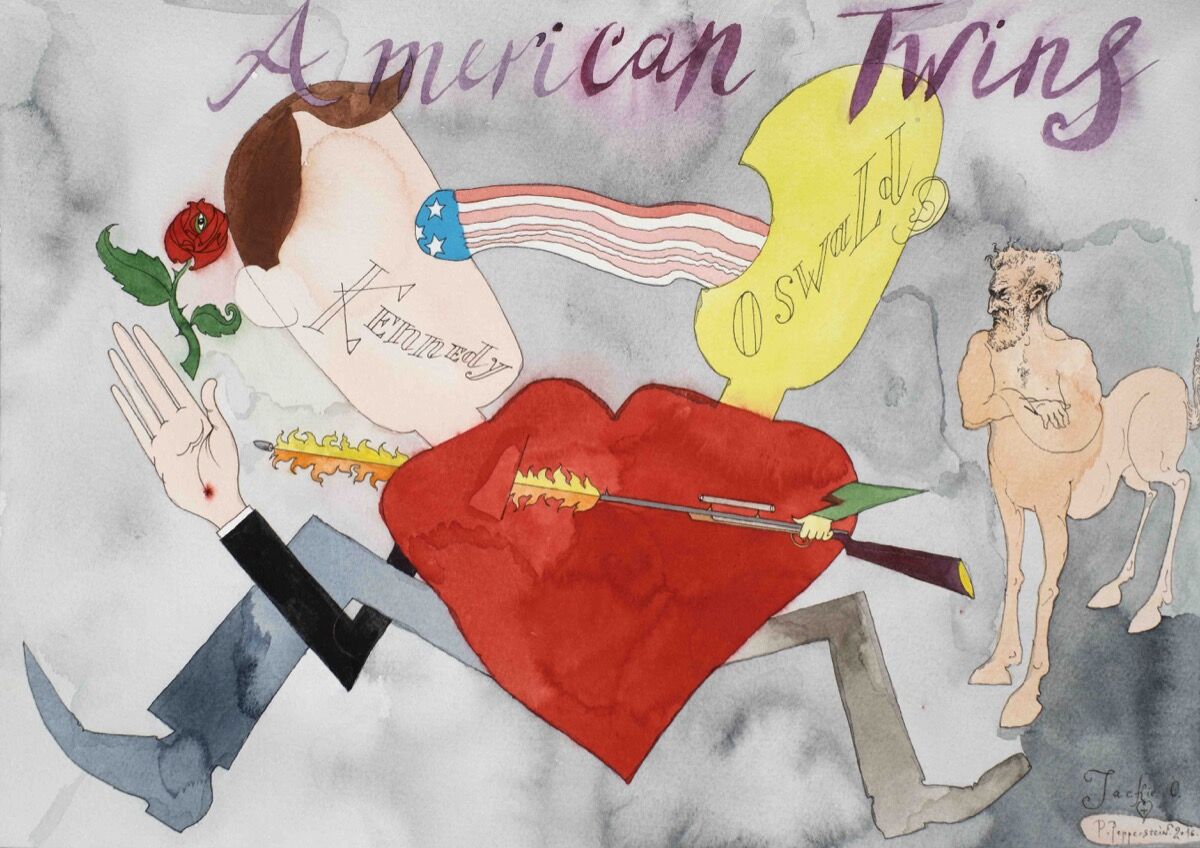 In Russian artist
Pavel Pepperstein
’s first-ever exhibition in America, the artist has created a fantastical narrative, imagining a series of drawings by former first lady Jacqueline Kennedy Onassis (known as “Jackie O”) after the death of her second husband, the Greek shipping magnate Aristotle Onassis. In Pepperstein’s ulterior reality, the artist discovers a cache of surrealist drawings by  “Jackie O” that are populated by the ghosts of ancient Greece, by her two previous husbands, and by her first husband’s assassin, Lee Harvey Oswald. They are sometimes whimsical, sometimes political, often captivating—and they convey the complex psychology of someone who has suffered trauma and retreated into her imagination, a space still haunted by her past. 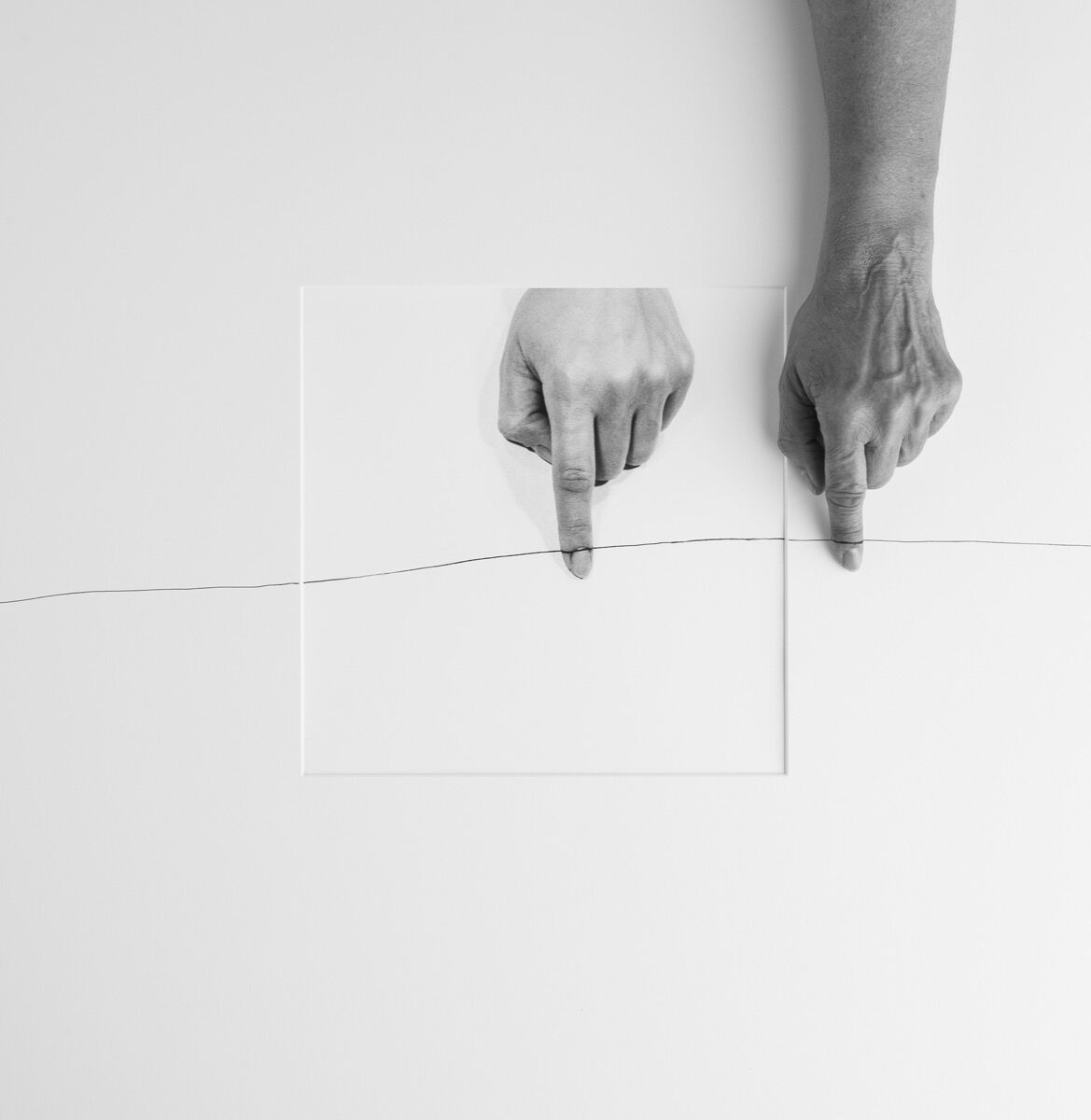 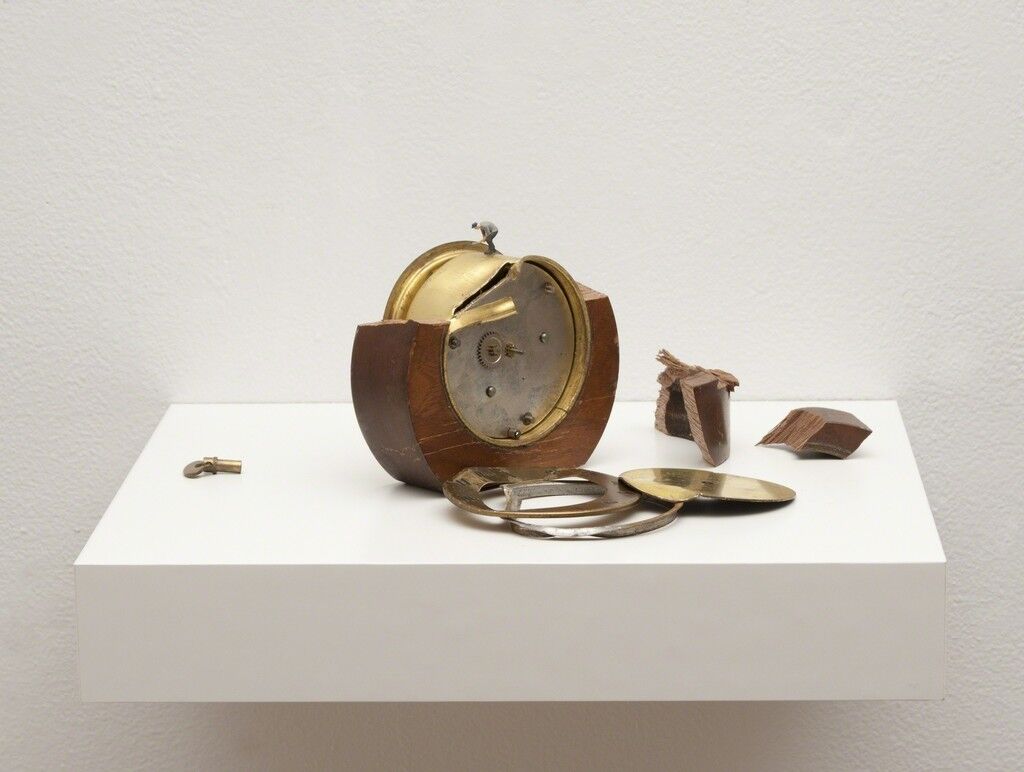 Liliana Porter
To Fix It II (round clock), 2016
Hosfelt Gallery
In playful works that are inflected with surrealism,
Liliana Porter
subtly shifts one’s sense of reality. Often using her cast of figurines—tiny, tchotchke-like creatures that appear to perform tasks and interact with two-dimensional works on a wall—Porter creates humorous, minimal tableaux. In Hosfelt’s booth, she has several such works on view, including those that reference one of her biggest influences,
René Magritte
. But the most seductive is a photographic print that sees images of two hands displayed side by side, with a thin thread tied around each of their pointed index fingers (Forty Years IIIB (hand over horizontal line 1973), 2013). The image, on sale for $15,000, is of Porter’s own hand, shot in 1973 when she first made the print, and again in 2013 when she added a print of the same, more aged hand, to the work. 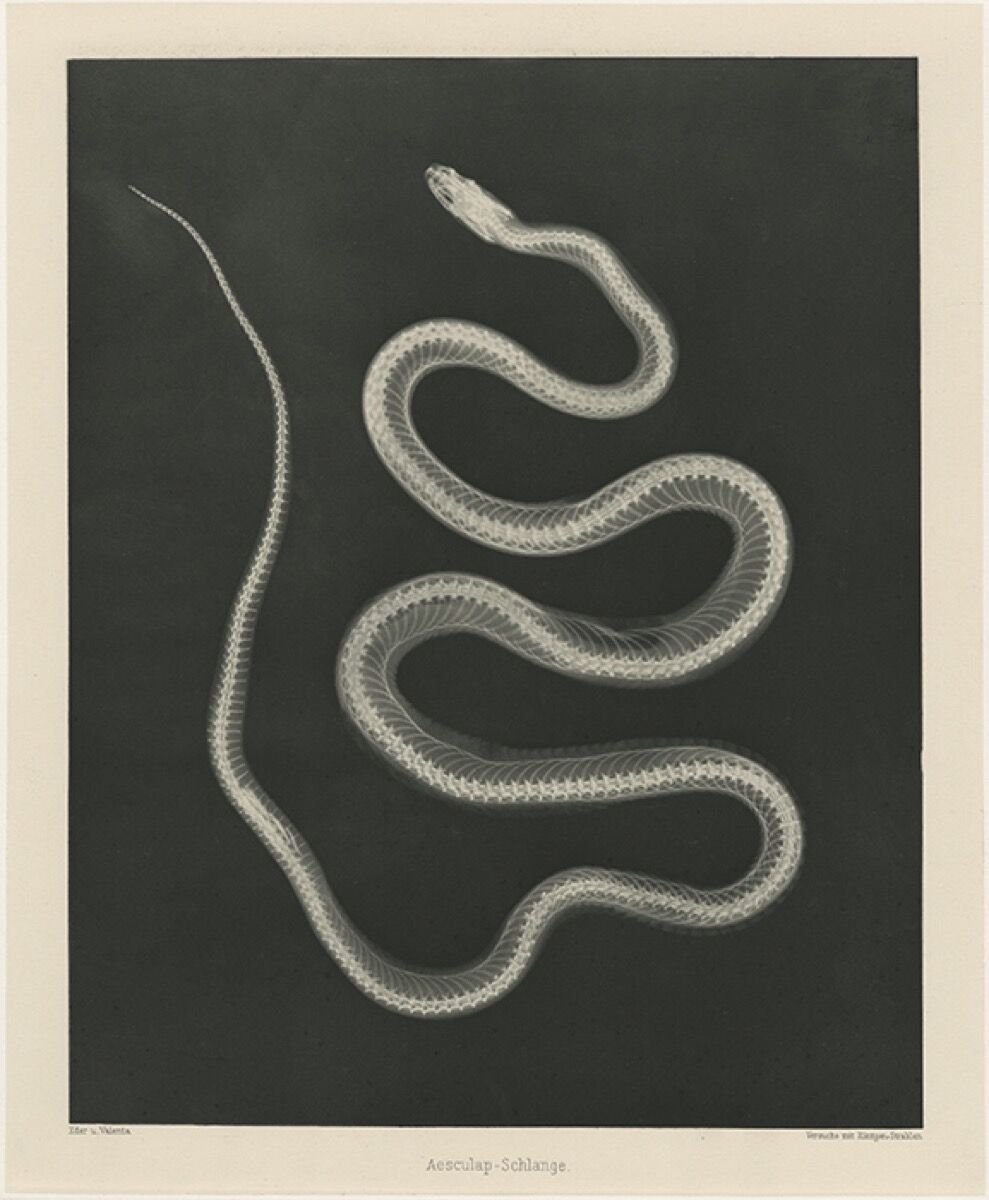 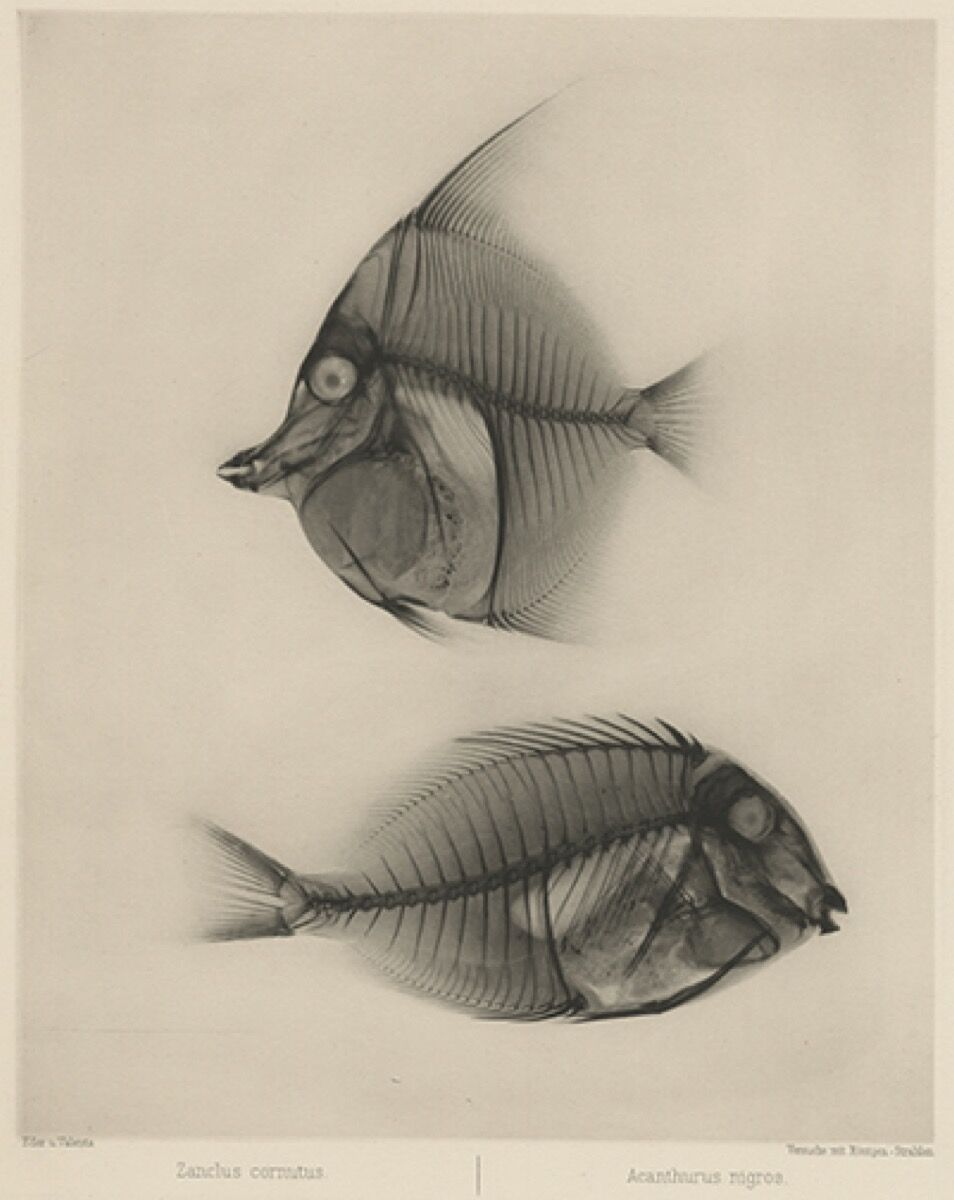 Hans P. Kraus, Jr., Inc.’s booth is a feast for analogue photography lovers. The presentation features several early X-rays (including one of a fish, beautifully revealing its delicate skeleton and gently curved, streamlined form), a rayograph by
Man Ray
, and contemporary daguerreotypes. Titled “Photograms,” the exhibition is a short history lesson in the development of photography, one that illustrates the rich tonal qualities of early photography techniques and the way in which the technology allowed viewers to use objects from the material world to create new forms.
Tess Thackara
Related Stories