Cambridge CSArt artist, Nancy Beams, working with a Google employee during an art workshop there on Feb. 21, 2018.

There are limited funding opportunities for performance artists like Pittsburgh-based Mark C. Thompson, who specializes in miming. But, fortunately for Thompson, community-supported art initiatives such as CSA PGH exist. The program paid him to stage an unusual performance with imaginary can openers in 2015 for a small audience of local art patrons.
CSA PGH and other artist-first programs like it are modeled after popular community-supported agriculture programs (CSAs). These programs see consumers (or “shareholders”) pay a fixed rate at the start of a growing season, and in turn receive fresh, local produce on a weekly or bi-weekly basis. CSAs traditionally guarantee a set amount of upfront financial support to the farmers, many of whom have found this source of income to be vital, especially given the unpredictable nature of produce harvests.
Community-supported art programs—first developed in 2010 by the Minnesota-based nonprofit Springboard for the Arts—provide the same kind of pledged financial support to artists. Shareholders can purchase one of a limited number of seasonal shares for a set rate (usually a few hundred dollars, though sometimes as little as $25 per month). This payment ensures that the shareholder will receive a predetermined number of original artworks that are distributed during harvest events, where they typically meet the artists in person.
Selling shares of art allows CSA administrators to pay a stipend (in the range of $1,500) to a selected group of artists, who have typically applied to the program, and are in emerging to mid-career stages. Artists receive this payment before they create their work for the CSA, which gives them the opportunity to create art that is more experimental, since it is already sold. Since the model was first developed, around 70 art CSA programs have sprouted up all over the United States.
Clearly, there is demand for these art CSAs—among cultural entrepreneurs that start them, art collectors, and perhaps most importantly, artists—and they can offer an alternative means to support the local creative economy. Below, we share nine CSA art programs that are aiding artists across the U.S. Each day, Cambridge’s population is doubled by a large influx of commuters, and this CSA, active since 2011, wanted to create art patronage opportunities within the local corporate ecosystem. This was especially evident during last year’s annual harvest party (where shareholders collected their CSA artwork), which took place at the regional Google offices. Some of the works are still on view there, after Google’s arts committee invited the CSA to put on a six-month exhibition.
Opportunities like this have provided great exposure to the CSA’s annual roster of seven to nine artists, who create limited-edition prints for the program. Shareholders choose from three purchasing options: a small bundle (three artworks for $150), medium bundle (six artworks for $300), or a full share (nine artworks for $450). Beyond helping artists reach new patrons, Cambridge CSA also leads nine targeted business and marketing workshops for its artists to help them hone or develop financial skills.

Co-founded in 2014 by artists Alana Dao, Guy Lyons, and Meg Willing, this CSA has sought to foster a sense of community among local makers. Dao noted that they ran critiques and other events for participating artists to connect and meet one another. A few of the artists that took part in the program have gone on to begin work ventures together (such as local design firm Chicken 3000), and several others trade pieces with one another.
Of the works created for the CSA, pieces have ranged from photographs to limited prints and works on canvas that are sold at a monthly subscription rate of $25 per month (for a three month share, in which one work is distributed each month). The platform used to host harvest parties for shareholders to collect their work, but has now shifted to a digital subscription where works are sent out through the mail, inspired by the Mail Art movement.

Last year, when the artist Brian Wetjen decided to focus more on his art practice (as opposed to his day job as a web designer), participating in CSArt Omaha was exactly the motivation he needed. “It was a good incentive and requirement to get my shit together and be ready for a more professional approach to my art practice,” Wetjen recalled. Now creating limited edition works on paper for the second year in a row, he’s found that being part of the program has forced him to step up his practice and do things like update his website, make a presentation about his work, and prep his studio for visits.
Founded in 2014, CSArt Omaha has a successful track record thus far. Its 60 shares are in such demand, in fact, that they completely sold out in under an hour during the program’s first year.
The shareholders’ guaranteed financial support—a stipend of $1,500—gave Wetjen unprecedented creative freedom. “Many of the pieces were my first attempt at some new compositions and ideas,” he said. “Having the work ‘pre-sold’ let me work from the stance of knowing that I had to be happy with the final work, and then trust that if I liked it, the recipient would, too.” While most art CSAs are geared towards the visual arts, this Fargo-based CSA does things a little differently: Each of the 50 shares (priced at $400 each) includes performance, visual, and culinary arts components, presented during three festive shareholder evenings.
One of the program’s greatest success stories has been its ability to help performance artists create new work, said Dayna Del Val, president and CEO of The Arts Partnership. She added that even small stipends can give performance artists the seed money they need to embark on a new project.
A local semi-professional ballet company that participated in this CSA used its stipend to develop a new performance. “It premiered at our CSA, and then they took it to a national competition,” Del Val recalled. “They took this little $1,500 stipend and created something that put them on the map in a very different way.”

For the past seven years, ASC Community Supported Art has sold out its 50 shares (priced at $500 each) in under 48 hours—and its administrators make sure that participating artists are well equipped to develop relationships with eager new patrons.
“We distribute shareholder contact information to the artists for each season,” said Katherine Mooring, ASC’s senior vice president of community investment. “We encourage artists to begin developing individual relationships through email and social media channels, as well as through the one-on-one time they spend with shareholders at events.” Three springtime pickup events take place each year, and by the season’s end, shareholders will have received a total of nine artworks (one by each participating artist).
Artists continue to be supported even after a season has ended. ASC is currently working on a special exhibition at a Charlotte art gallery to showcase the work of all artists who have participated in the program, as well as creating networking events.

As evidenced by Mark Thompson’s experimental can-opening performance piece from the 2015 season, CSA PGH has been open to a range of work since it first began in 2013. The program, founded by three artists and an art appreciator, has committed to supporting six or more artists per year. Participating artists have realized a variety of projects, including ceramic milk bottles,
Afrofuturist
sculptures, dip-dyed beach towels with printed poetry, and fabric garlands that spell out phrases sourced from Craigslist.
Casey Droege, an original co-founder and the current manager of the CSA, noted that several artists who participated in the program have shared feedback that it pushed them to try out new ideas and begin new series. 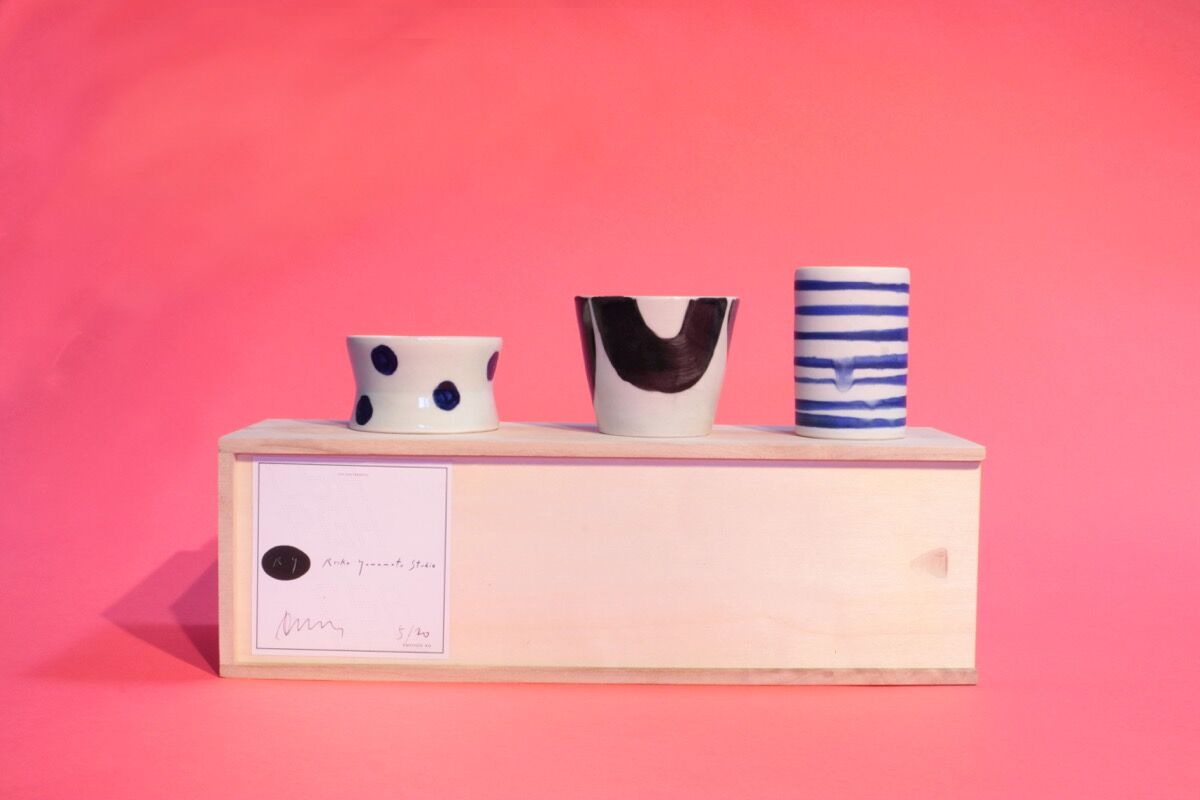 The four artists who participate annually in the Dayton Visual Arts Center CSA get the benefit of having their work broadcast, via email, to the thriving organization’s 75 regional partner museums and galleries. But according to Eva Buttacavoli, the executive director of DVAC, it is the opportunity to support local artists creating experimental work that is the most exciting aspect of the program.
“I would say the number one thing for the artists is the opportunity to get paid to make new work,” Buttacavoli says of the program, which began in 2016.
Shares are available for either $350 for unframed works, or $650 framed, and the 2018 season offerings rang from a digital print to a limited edition etching.

Northwest Indiana is not generally considered an art center, not even by the artists who live and work there. But this Valparaiso-based CSA, founded in 2015, has helped them form a network, allowing them not only to meet a loyal group of shareholders (many of whom have repeatedly purchased one of the limited 50 shares, sold at $175 each), but also one another. One of the artists participating in the 2015 season, painter Robin Janota, was so inspired by her peers that she herself bought a share the following year.
Valpo CSA actively tries to support artists in a variety of media, and at different stages in their careers. Its most recent call for artists requested applications from musicians, writers, fiber artists, and designers in efforts to extend its reach.

Arts nonprofit WonderRoot’s mission, which is to affect social change through the arts, is manifested in its CSA. The program aims to foster burgeoning art collectors, offering shares at three price points (from $200 to $600) and artworks ranging from prints and photographs to original paintings and sculpture.
The veteran program, now in its 10th season, is also devoted to keeping artists in the Atlanta community by investing in them financially and creatively.
As a WonderRoot CSA infographic simply puts it, “Shareholder’s home is filled with beautiful art or unique gifts for friends. Artists eat and create more art. Atlanta prospers with a vibrant local arts ecology.”
Karen Chernick
Related Stories