9 Famous Sites from Art History Are in Danger of Destruction

Benjamin Sutton
Jan 31, 2019 12:12pm
The sites portrayed in many beloved artworks have been completely transformed since they were committed to canvas, carved in stone, or captured on film. Modern cities have risen at locations that were once picturesque villages; intensive farming has helped transform near-deserts into verdant pastures and lush greenery into parched wasteland; and mining operations have lopped the peaks off mountains and carved canyons that would have taken millennia to form naturally.
As the scale and pace of environmental change continues to accelerate, and as human activity keeps fueling global warming, more and more artworks will appear irreconcilable with the places they depict. Herewith are nine famous works depicting landscapes that seem destined to be dramatically—and irreparably—altered in the near future.

Canaletto’s Venice, soon to be Atlantis 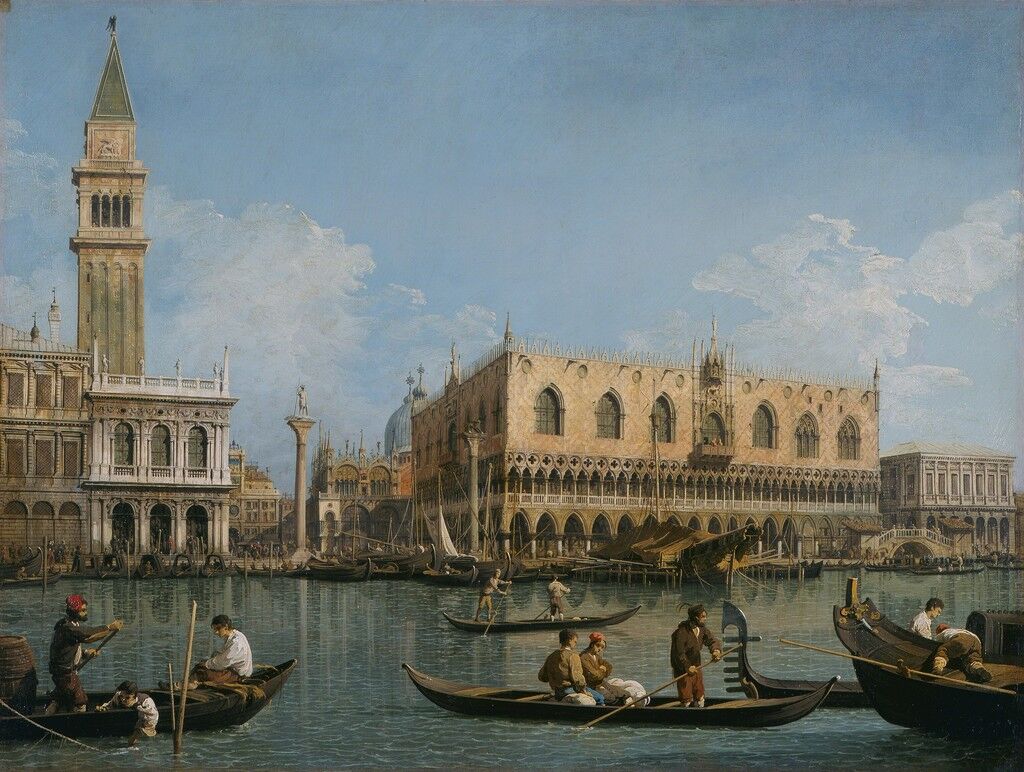 Canaletto
View of St. Mark's from the Punta della Dogana, 1740-1745
Pinacoteca di Brera
The scientific community’s consensus seems to be that at the current rate, Venice will be underwater by the end of this century. Italy’s extremely complicated and expensive flood prevention measures may be too little, too late. That will leave the Venetian cityscapes painted most iconically by
Canaletto
—whose name means “little canal”—as important records of the way things once were. Venice of the 22nd century, oddly, may end up more closely resembling
Damien Hirst
’s elaborate shipwreck sculptures, which he showed in the city during its 2017 biennale. 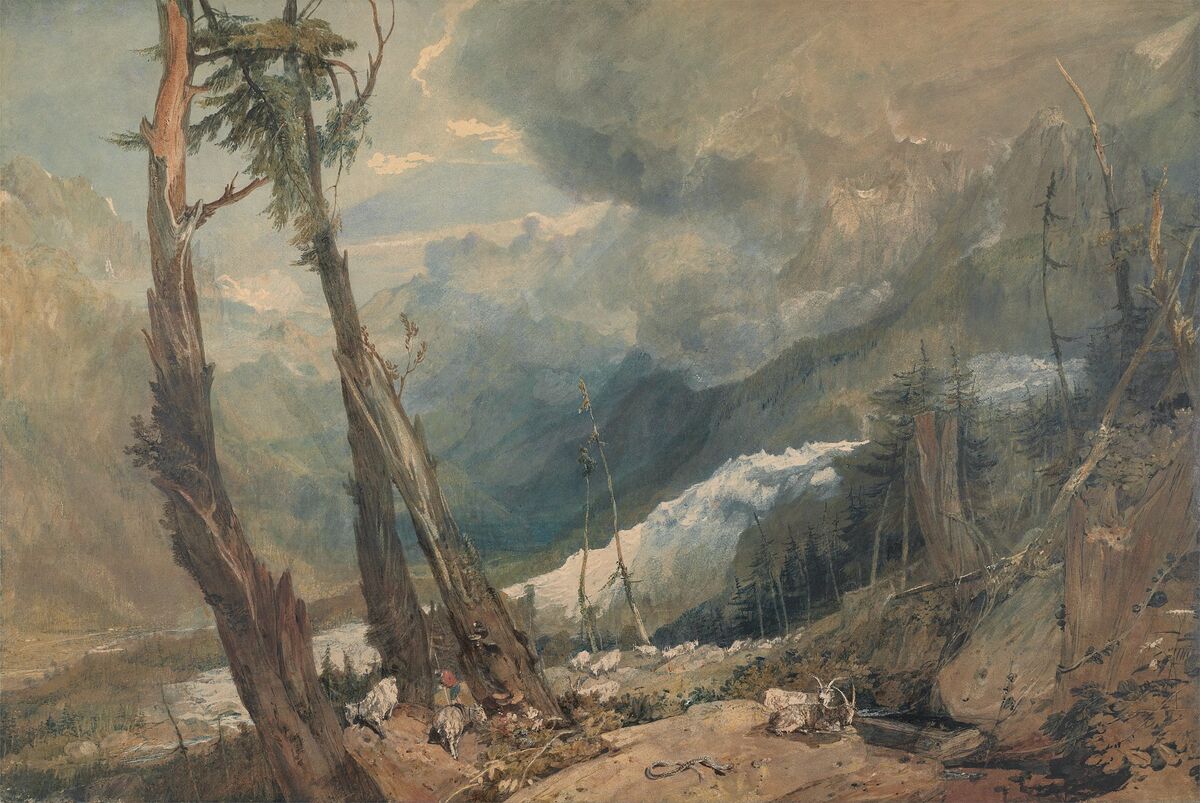 Advertisement
The melting of the glaciers in the Alps has gotten so bad that every summer, concerned Swiss citizens climb into the mountains and wrap the remaining glaciers in blankets to keep them cool. But that can only help so much, as the Alps’s glaciers are receding at record rates—and revealing the remains of missing mountaineers as they go.
In anticipation of a
J.M.W. Turner
and
John Ruskin
exhibition opening at the York Art Gallery in March, photographer Emma Stibbon was commissioned to photograph the same glacier that the 19th-century artists had rendered during their visits to the Alps. The resulting image is dramatically de-iced when compared to the sprawling glacier in Turner’s Mer de Glace, in the Valley of Chamouni, Switzerland from 1803.

Christo and Jeanne-Claude’s islands will go under 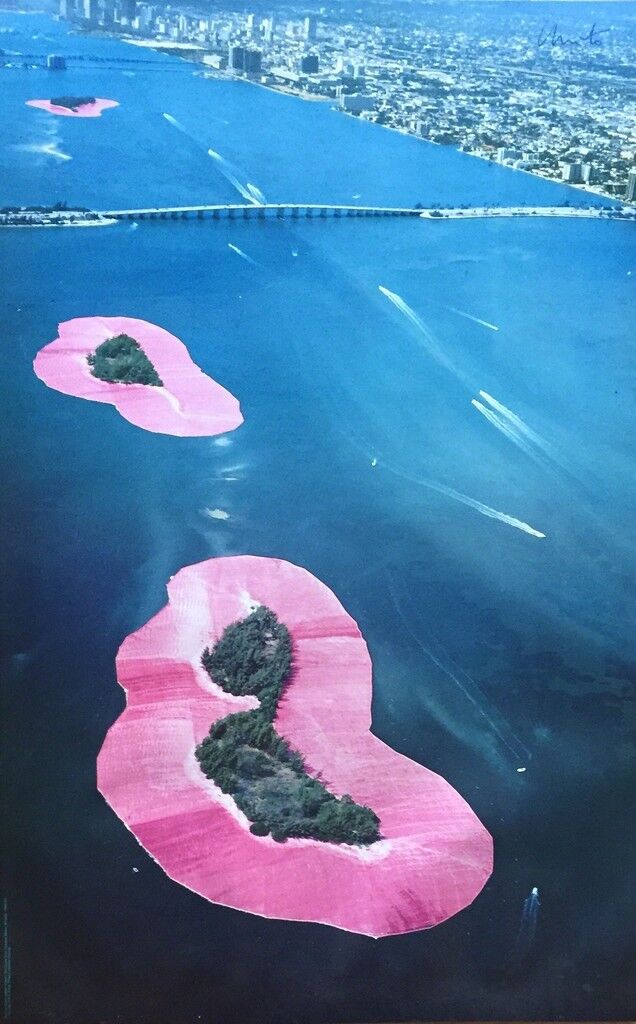 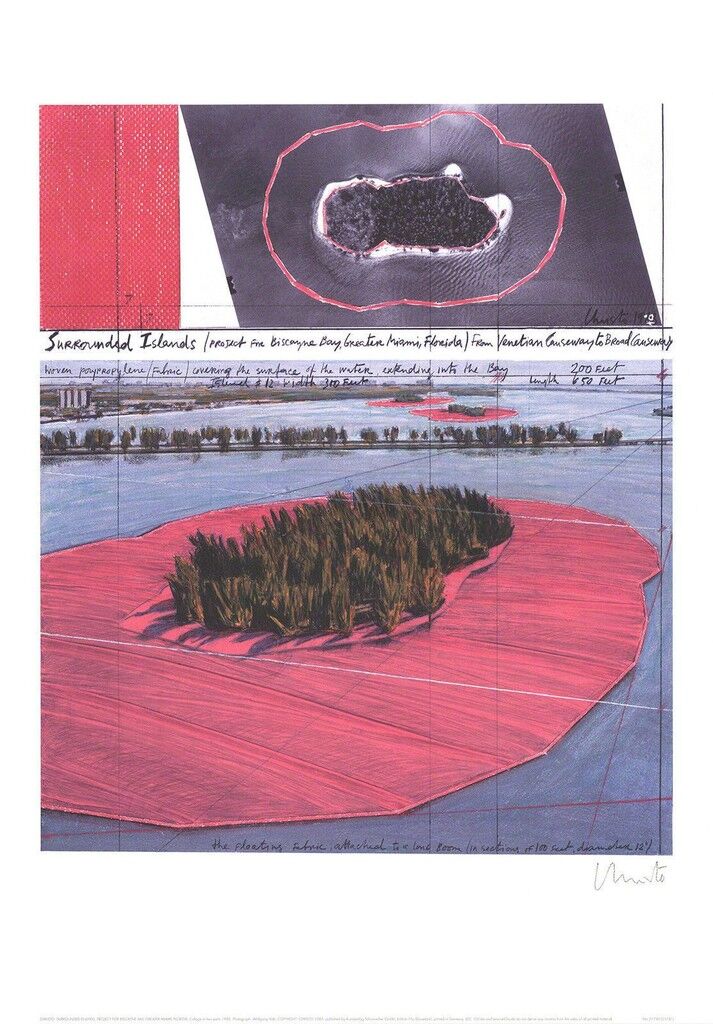 Christo
Surrounded Islands, Project for Biscane Bay, Greater Miami, Collage in Two Parts
MSP Modern
As sea levels rise, very flat coastal areas—especially those in hurricane-prone regions—are increasingly at risk, which means Miami is in big, big trouble. While that may not bother some Floridians, others are taking the problem seriously. Among the likely casualties of rising sea levels in and around Miami are the 11 islands in Biscayne Bay that were ringed in bright pink fabric more than 35 years ago by
land
artists
Christo and Jeanne-Claude
. This incredibly ambitious project, Surrounded Islands (1980–83), may unintentionally become a valuable record of a landscape soon to be submerged. 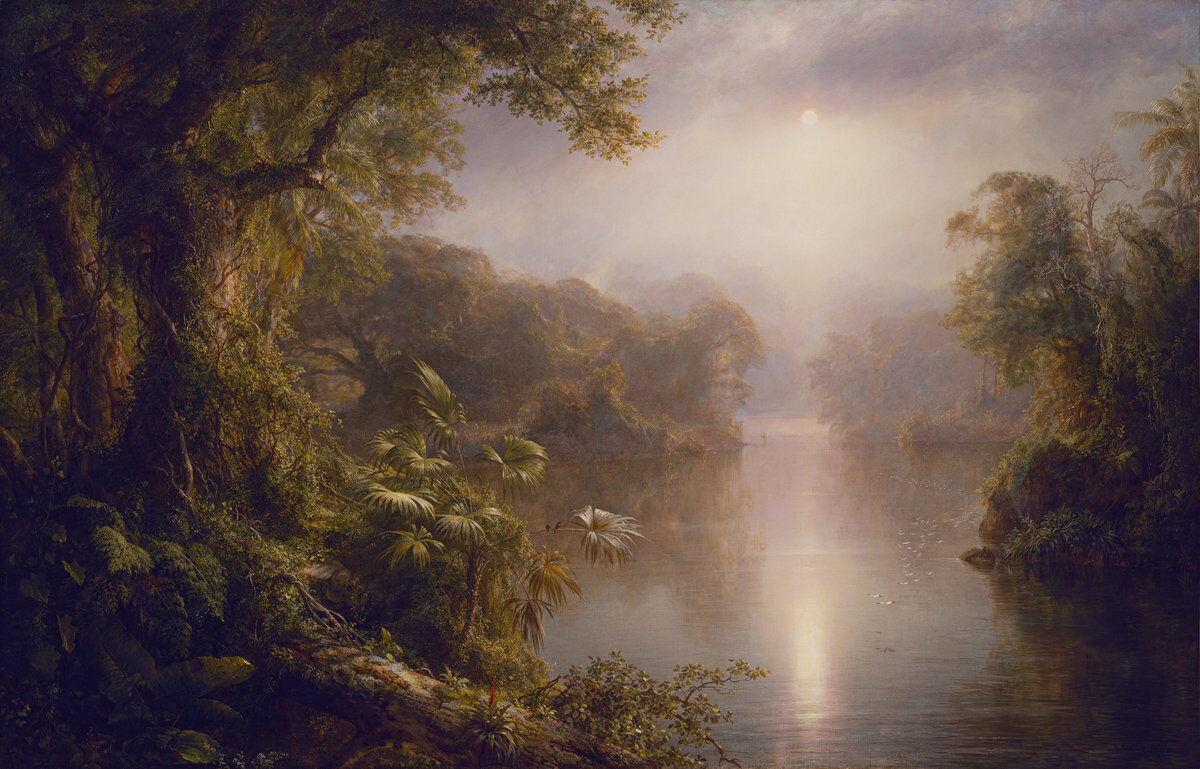 In the atmospheric painting now titled El Rio de Luz (The River of Light) (1877), but formerly known simply as The Amazon,
Frederic Edwin Church
rendered the iconic South American waterway in all its misty glory, with the sun struggling to pierce the humid air. But due to climate change and deforestation, the air in the Brazilian rainforest has become markedly less humid than it once was, and scientists believe it may be contributing to droughts in the region and a general drying up of the Amazon River. A satellite study of water vapor data by NASA suggested that the Amazon may not be able to maintain itself if its dry season gets much longer than it already has, and Church’s lush greenery framing the river could end up looking more like grassy fields.

100 views of Osaka before the floods 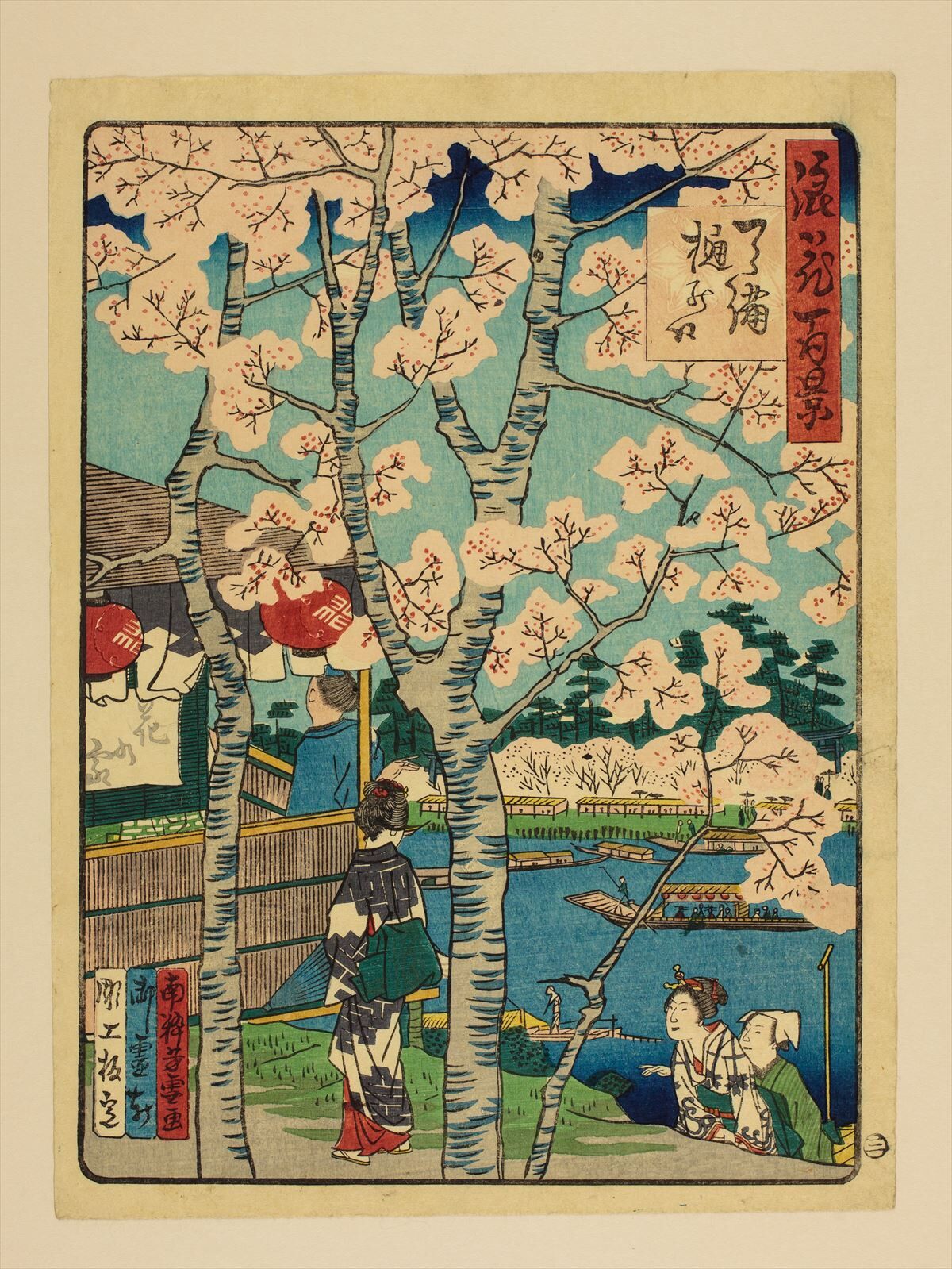 Utagawa Yoshitaki, from “100 Views of Naniwa,”ca. 1860. Image via Wikimedia Commons. 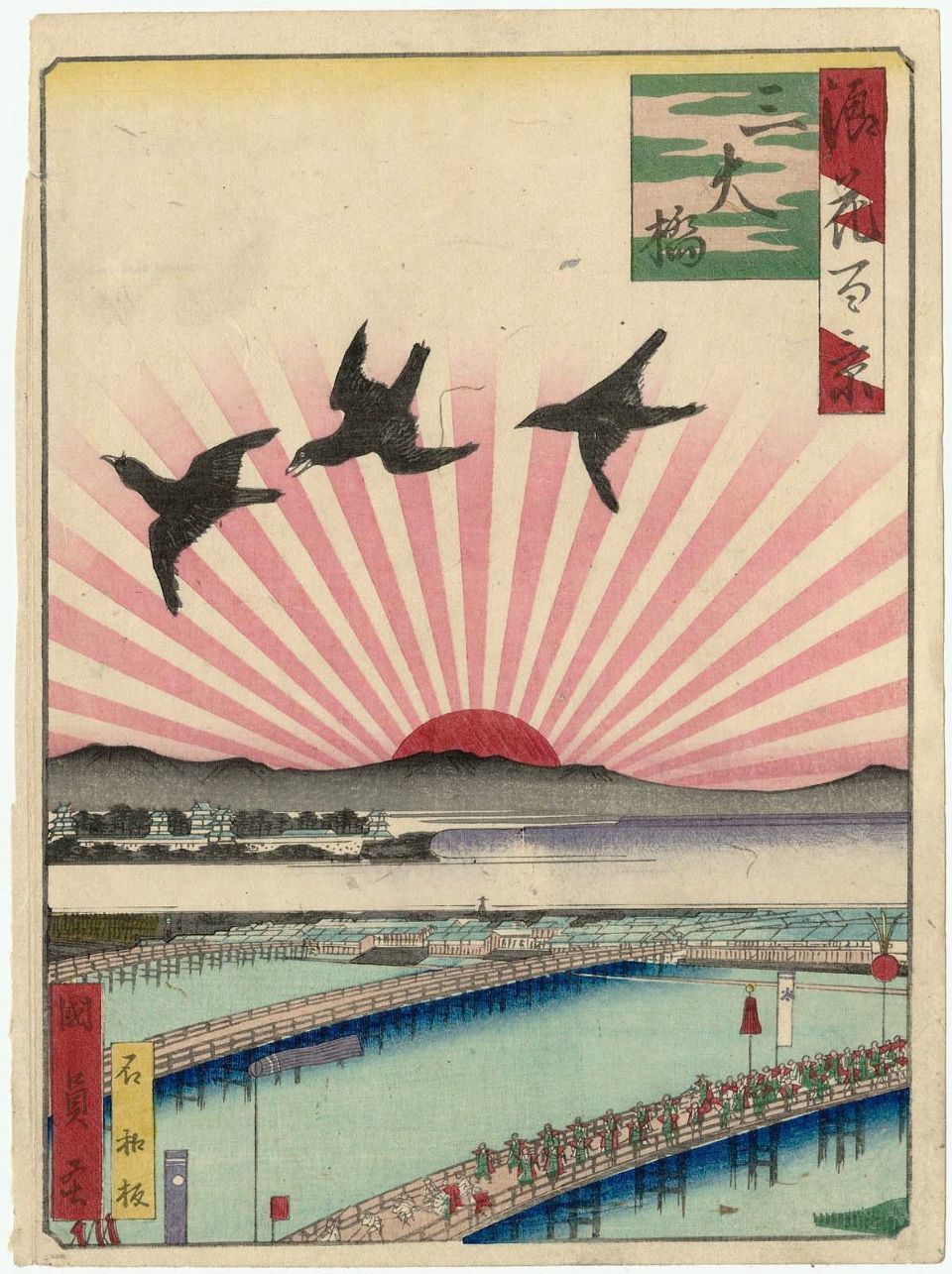 One of the major cities in Asia most at risk of rising sea levels is Osaka. In fact, its airport, which is built on a landfill in Osaka Bay, has already flooded. The city is the commercial linchpin of the enormous Keihanshin metropolitan region in Japan, which has a population of over 18 million, but if the global temperature rises more than 3 degrees Celsius by 2100—as the United Nations World Meteorological Organization has recently predicted—Osaka could be hobbled. It will be a far cry from the calm seaside city depicted by the
ukiyo-e
master Utagawa Yoshitaki in his sweeping 1860s woodblock print series “100 Views of Naniwa.”

Mexico City will go the way of the Aztecs 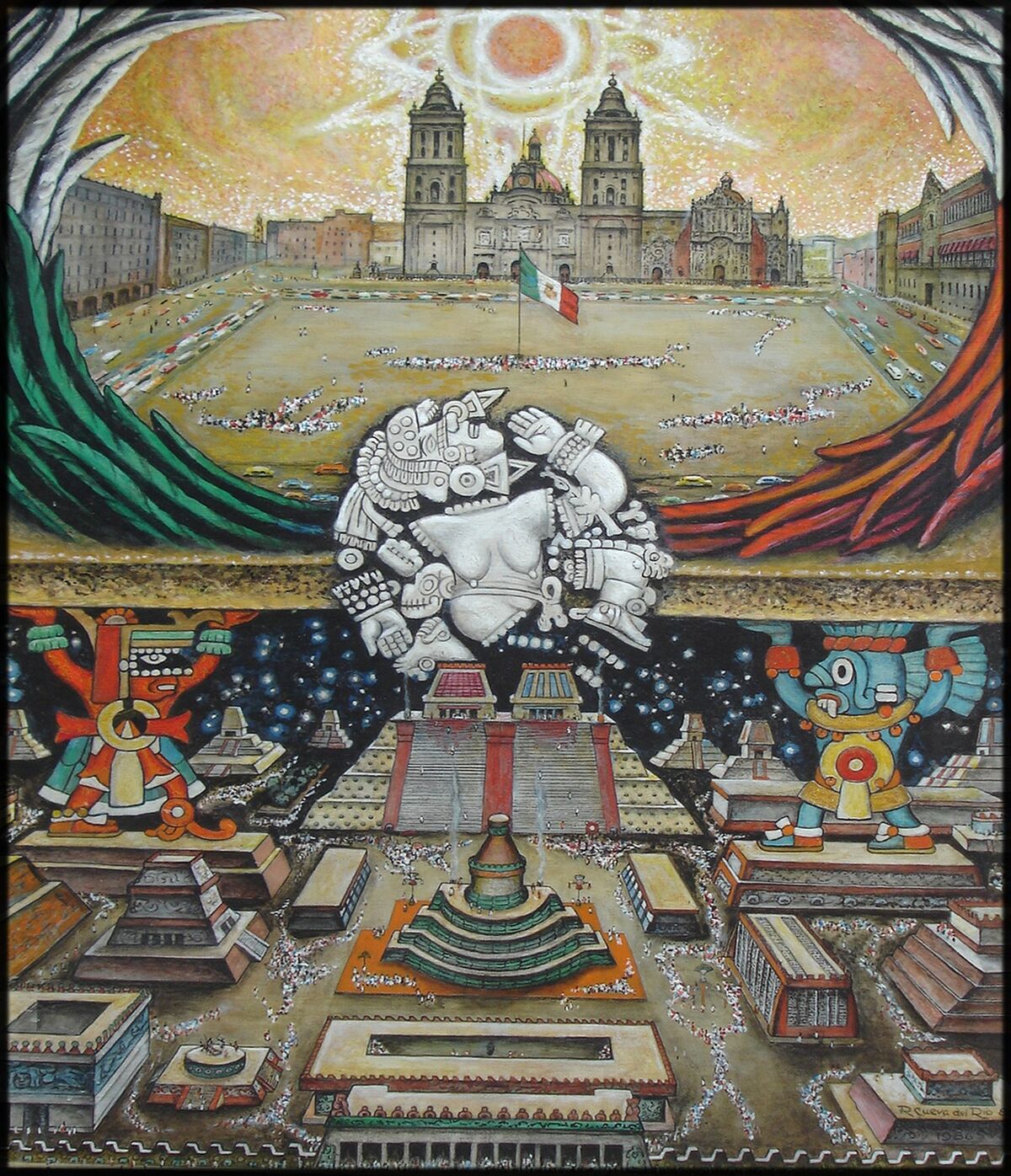 Mexico City, the largest metropolitan area in the Western Hemisphere, is bone-dry—and it’s sinking. According to a 2017 report in the New York Times, some parts of the city center are collapsing at a rate of 9 inches per year as the sprawling metropolis, perpetually short on water, taps ever-deeper underground reserves, thereby weakening the lake bed on which it was built. Add to this the rising temperatures and worsening droughts that accompany climate change and you get a bleak picture of Mexico City’s future.
These prospects seem far away from the heroic images of modern Mexico painted by muralists
Diego Rivera
and Roberto Cueva Del Río. In the latter’s rendering of the foundings of Mexico City and the Aztec city-state Tenochtitlan, he tellingly stacks the two cities atop each other. This is accurate not only because Mexico City was built on the site that was once Tenochtitlan, but also because the city now sits on a fragile clay surface that is falling in on itself. 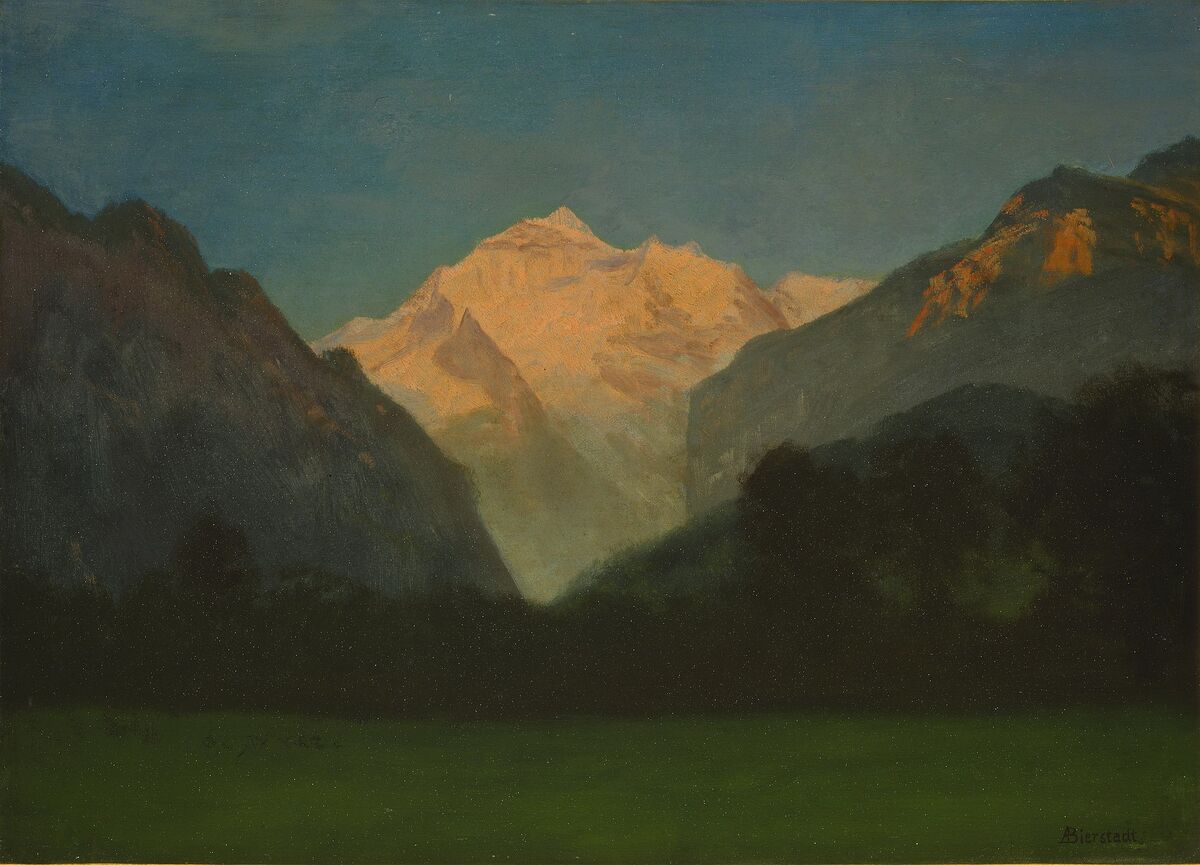 Much like the glaciers Turner painted in the Alps, the majestic, ice-covered mountain that
Albert Bierstadt
depicted in View of Glacier Park or Sunset on Peak (date unknown) is almost certainly a lot more barren today. While Glacier National Park contained 150 glaciers in the late 19th century, it is down to just 26 today. The park may lose all of its namesake geological features as soon as 2050, according to research by the U.S. Geological Survey (USGS) and Portland State University. “It’s inevitable that we will lose them all over the next few decades,” Daniel Farge, a USGS scientist, told The Guardian in 2017. In other words, photographs and paintings like Bierstadt’s dramatic, pink-tinged peak will soon be the only reminders that Glacier National Park once had any glaciers at all. 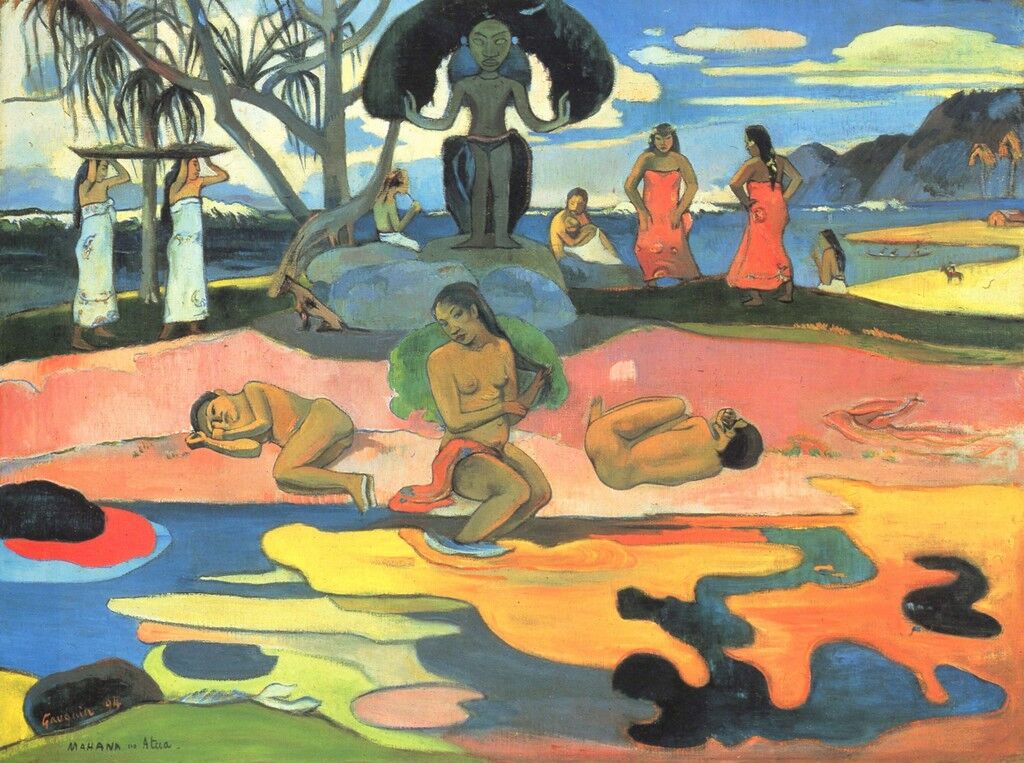 Paul Gauguin
Mahana No Atua (Day of the God), 1894
The Art Institute of Chicago, Chicago
Paul Gauguin
’s depictions of life in French Polynesia suggest a carefree tropical paradise, but of course, the reality of his presence there was much more problematic. Now, problems of an entirely different order threaten to trouble the cerulean blue waters of islands throughout the South Pacific, which are increasingly at risk of being wiped off the map by the combination of erosion and rising sea levels.
In a 2013 study of more than 1,200 French islands around the world, scientists at a Université Paris-Sud lab found that between 6 and 12 percent of those islands will disappear, depending on the extent the sea level rises. In any case, the Polynesia of Gauguin’s paintings will be radically transformed—there’s even been talk of creating floating islands to replace some of the landmass lost to climate change.
Benjamin Sutton is Artsy’s Lead Editor, Art Market and News.
Related Stories

How 19th-Century Artists Envisioned the Apocalypse

The Artist Who Gave America Its First Signature Art Form 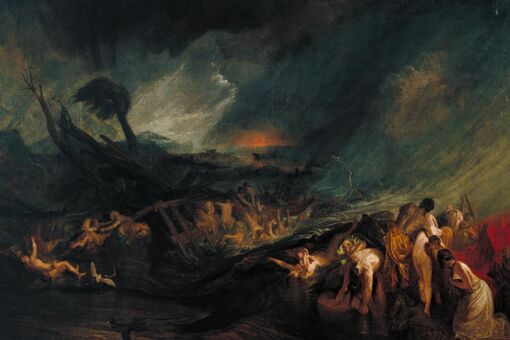 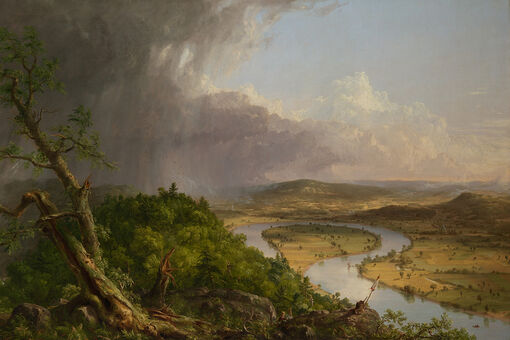