Emily McDermott
Apr 30, 2018 5:28pm
An influx of both art-world power players and newcomers to Berlin recently descended for the 14th edition of the city’s Gallery Weekend. The official program included 47 galleries, from established spaces like Sprüth Magers and König Galerie to younger locations like Klemm’s, with countless project spaces and other mid-size galleries opening their doors, as well. After hopping around Berlin’s Mitte, Potsdamer Straße, and Kreuzberg neighborhoods, here’s the best of what we saw, including two impressive group shows that were not part of the official roster. Located slightly off the beaten path of Potsdamer Straße, the more experimental gallery Société showcases four bodies of new work by Jeanette Mundt. The artist happily refuses to commit to one style of painting, roving instead from precise figuration to abstraction. In one room, she’s showing what she refers to as her “pink camo selfie series,” which depict the artist—and all of her tattoos—posing against Pepto Bismol-pink backdrops enlivened by tree branches and deer. In another series based around the Olympic gymnast Simone Biles, Mundt riffs on
Eadweard Muybridge
—but instead of expanding time, the artist condenses it. We see Biles smile, run, purse her lips, jump, flip, land, and smile, all within the same glitchy compositional frames. Elsewhere, Mundt explores completely different territory, including a series of still life and memento mori paintings, like You Can’t Bite into the Peach (2018), a modest black-and-white painting of a skull resting on a table. While it might not be readily apparent, all this disparate material is meant to be an investigation of America’s obsessions and superficiality. As for why the artist chose to name her exhibition after a pop star? “I love Lana,” Mundt told Artsy. “I relate to her artistic identity and personas, especially her investigation of what makes America.” 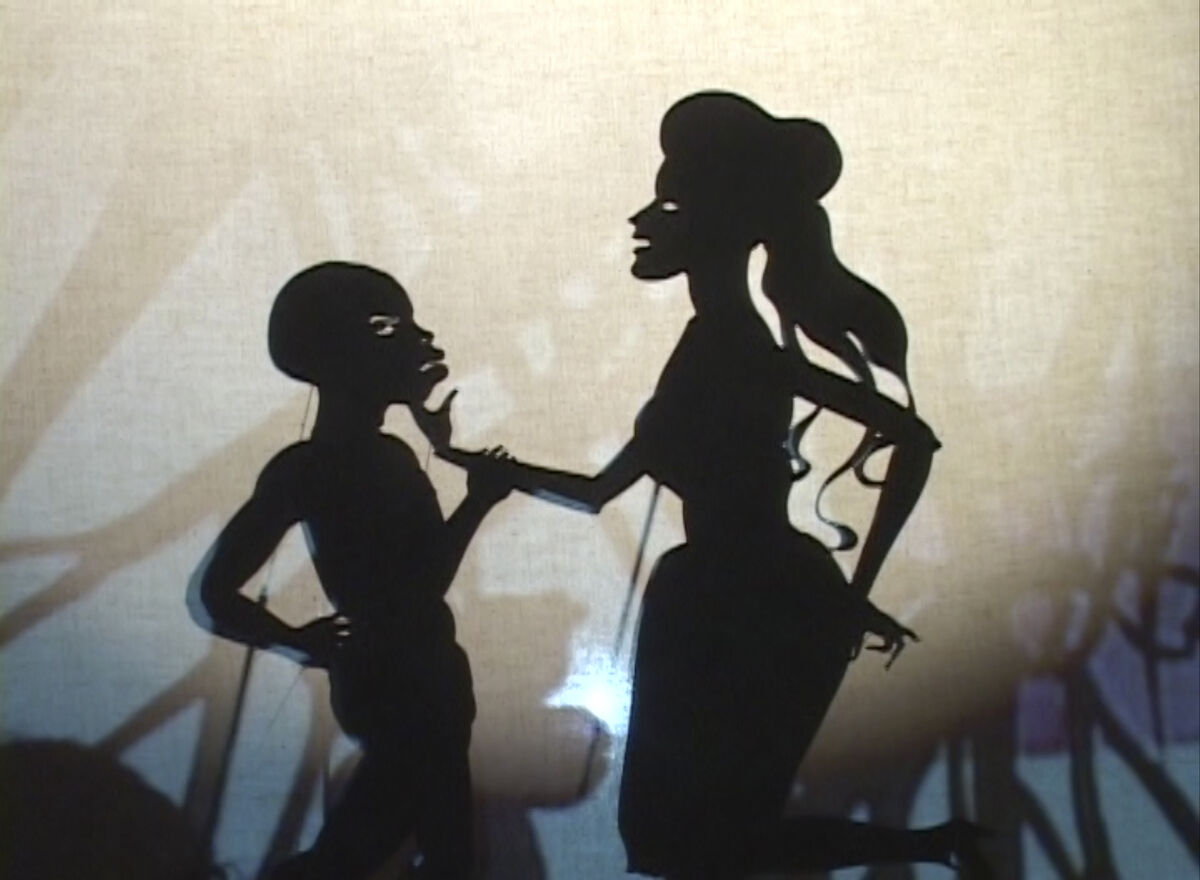 Advertisement
For her first solo show with Sprüth Magers, Kara Walker exhibits her video Fall Frum Grace, Miss Pipi’s Blue Tale (2011). Over the course of 17 minutes, Walker, using shadow puppets, tells the harrowing tale of a southern belle and her affair with an African-American man (presumably a slave), who is eventually beaten, castrated, and killed by a group of white men who discover the pair’s ongoing relationship. While Miss Pipi was clearly a willing participant in the romance, her relaying of the encounters to her white peers recasts it as something violent—maybe even a rape. She changes the narrative perhaps not only in her retelling, but also in her own memory.

Mario García Torres
, “Not to belong to themselves” 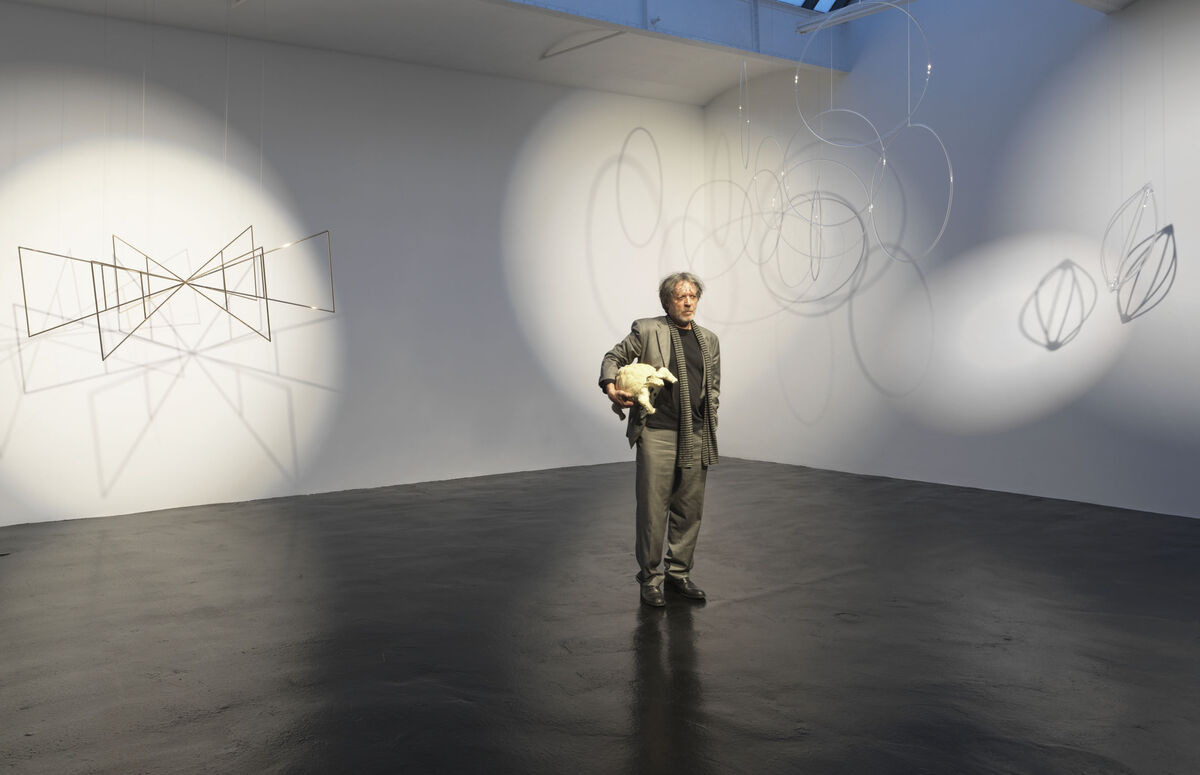 For the duration of Gallery Weekend, neugerriemschneider hosted a performance once every hour that served as both an artwork and a companion to Mario García Torres’s exhibition. (It will repeat at set times, Thursday through Saturday, until the closing of the show.) The performer, a short man with greying hair, entered the gallery with a mechanical albino turtle, which roamed the space while he explained that the artist asked him to “say a few words.” He speaks tangentially, exploring Bertrand Russell’s Paradox and Zeno’s Second Paradox of motion, two ideas central to the conceptual foundations of mathematics. He circles around themes of infinity, continuity, and the self. Meanwhile, a series of thin, suspended, geometric sculptures serve as a visual backdrop, each illuminating and casting stark shadows during key points of the speech. Installation view of Claudia Comte, “When Dinosaurs Ruled the Earth,” at König Galerie, 2018. Courtesy of the artists and König Galerie.

Located in a converted
Brutalist
church in Kreuzberg, König Galerie let Claudia Comte to transform its nave into a pseudo-forest. Twenty towering spruce trees, suspended from the ceiling, are stripped of their bark and scorched at their bottom ends; glistening sap seeps from knots in the young wood. Each trunk is carved to hold Comte’s sculptures in marble, wood, and bronze of manmade and natural objects: soda cans, mushrooms, seashells, an axe. In addition to the sculptures, Comte premieres new video works, incorporating 4-D animation and sweeping landscape shots of remote areas in Kyrgyzstan, Papua New Guinea, and Indonesia, respectively. The artist’s interwoven use of materials both old and new forces us to think about the growth of technology and its impact on the natural world.

Sven Johne
, “Dear Vladimir Putin / I am the Power” In German artist Sven Johne’s Lieber Wladimir Putin / Dear Vladimir Putin, we watch as a (fictional) retired civil engineer named Peter Bittel prepares to give an address to the Russian president. He scrubs his armpits and brushes his teeth while practicing his speech, which partly reflect on his own experiences in Dresden, Germany, living under Soviet rule. Meanwhile, a series of posters hanging in the gallery space capture the very different self-help ethos of capitalism: 12 portraits of motivational speakers and life coaches are overlaid with slogans like “Shoot for the moon. Even if you miss, you’ll land among the stars,” and “Everything you want is on the other side of fear.” The exhibition ends up being a humorous and subversive critique of modern political and cultural uncertainty and instability.

AA Bronson
and
General Idea
, “Catch me if you can!” 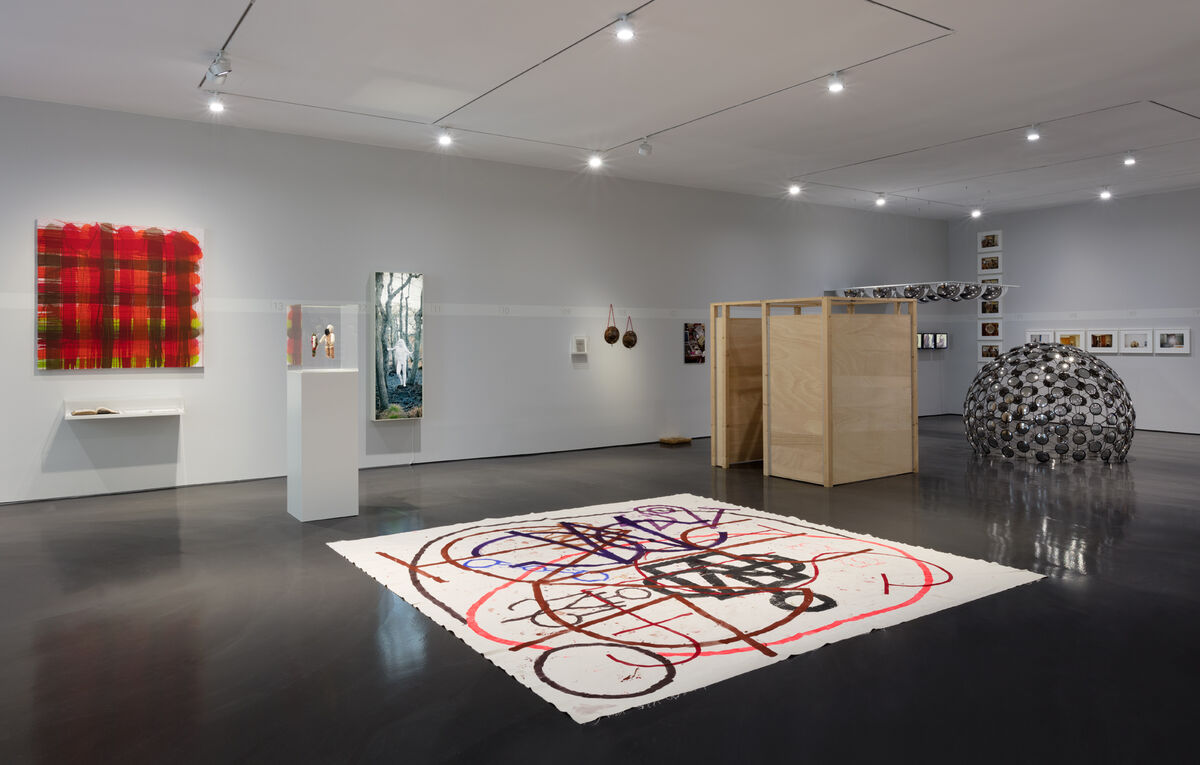 Installation view of work by AA Bronson and General Idea for “Catch me if you can!” at Esther Schipper, Berlin, 2018.

In 1968, AA Bronson met Felix Partz and Jorge Zontal; the trio would soon go on to form the pioneering art collective General Idea. Now, exactly 50 years later (and 25 years after the deaths of both Partz and Zontal), Esther Schipper is presenting sculptures, paintings, photographs, and other works made collectively by General Idea and individually by AA Bronson. That includes a series of elaborate costumes, like one that Partz donned in 1984 as part of the Miss General Idea Pageant, staged in front of Toronto’s City Hall. Also on view: Bronson’s Bubble Machine #2 (2003), composed of convex mirrored circles connected in a web-like sphere. The piece replicates the structure of the HIV/AIDS virus while also reflecting the viewers’ gazes back upon their own bodies. Ian Cheng’s “Emissaries” series—exhibited last year at MoMA PS1 in New York—gets its German debut. Consisting of three animated simulations, the trilogy follows an unidentifiable protagonist, the “Emissary,” as it attempts to achieve a set of goals. Although these goals are not entirely obvious to the viewer, what become clear are the disruptions and challenges faced along the way—from robotic creatures to natural disasters and wild dogs. Cheng programmed his cast of characters with behavioral drives, leaving them to continuously self-evolve in reaction to random occurrences. That means that none of the works technically have a beginning, middle, or end; they’re somewhere between a performance and a video game. Located above a Woolworth discount store with an entrance next to a döner stand, the inconspicuous project space PS120 opened its doors for the first time with a blockbuster exhibition featuring an established generation alongside younger artists (including at least one who has never previously exhibited).
Joan Jonas
’s black-and-white silent film Wind (1968) screens in one area of the space, cutting back and forth between a group of performers as they erratically move through two barren landscapes: a snowy field and an empty beach. A separate room is dedicated to
Reneé Green
’s Come Closer (2008), which makes similarly abrupt jumps as it interweaves the stories of characters in Lisbon, San Francisco, and Brazil. Be it through language or silence, both artists explore how people navigate their places in the world. Another appropriate pairing is
Rosemarie Trockel
and Olu Ogunnaike, who, through their works Made in Western Germany Blue (1990) and Stock: 1/4 - 107792391 (2018), both consider industrial commodities and mass production. Trockel’s textile speaks to the manufacturing of goods and artisanal production typically outsourced to women; the work, after all, was woven by Tibetan artisans, yet reads “Made in Western Germany.” Ogunnaike, on the other hand, incorporates Oriented strand board, similar to particle board, addressing the speed and lack of quality now commonly found in mass-produced Western goods. 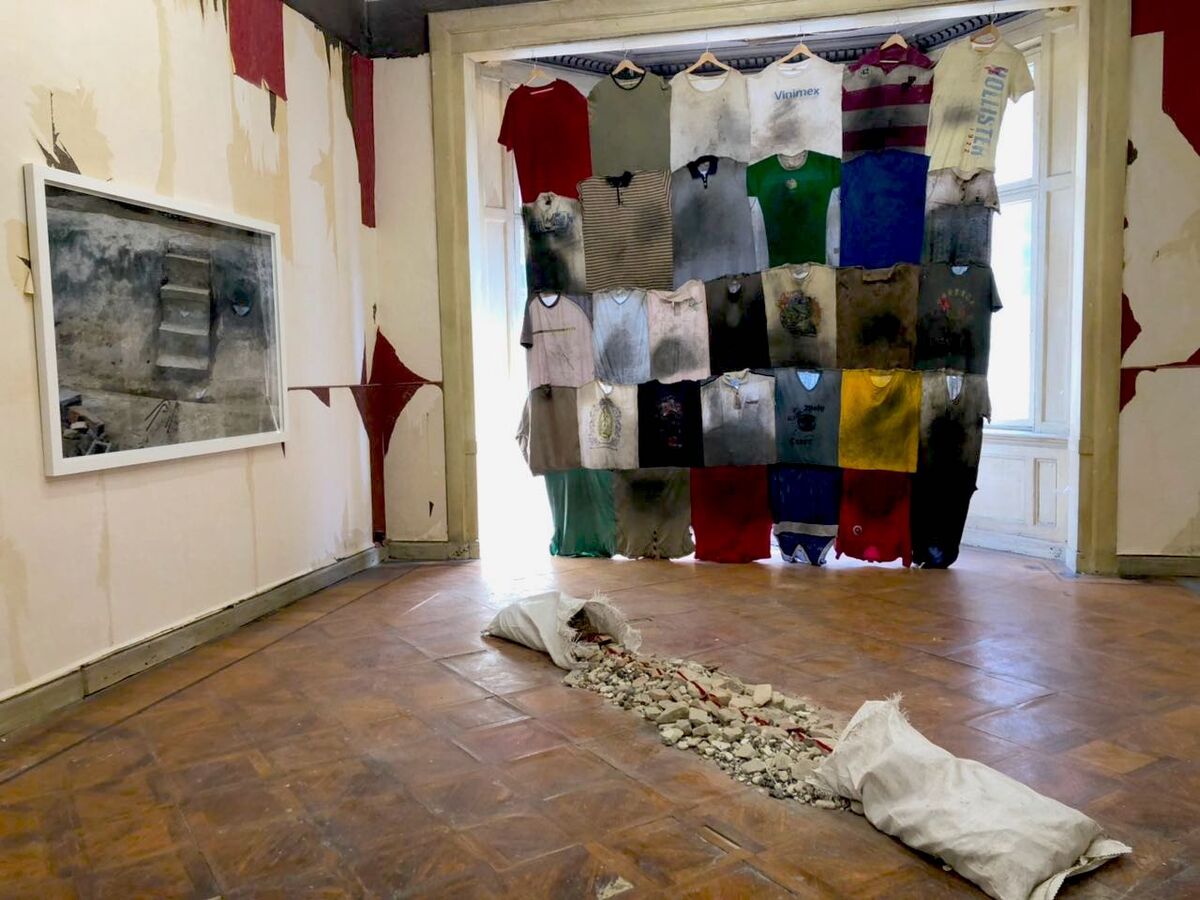 Four foreign galleries—Nueveochenta (Colombia), Arróniz Arte Contemporáneo (Mexico), Galerie Michael Sturm (Germany), and NF/Nieves Fernández (Spain)—came together to put on two parallel exhibitions inside an abandoned apartment building in the center of Berlin. These two shows, however, end up seeming more like miniature solo spotlights for the nine participating artists, as each is given ample breathing room (with a bit of extra ambience courtesy of the peeling wallpaper and original parquet flooring). The underlying theme is the artistic relationship between Latin America and Berlin. From
Mauro Giaconi
’s floor sculptures of rubble (marked by painted grids and lines) to
Moris
’s hanging curtain of dirtied, found t-shirts, the work’s raw energy is often perfectly matched to the site.
Emily McDermott
Related Stories