At 91, Geta Brătescu Is Still Testing the Limits of Her Creative Freedom 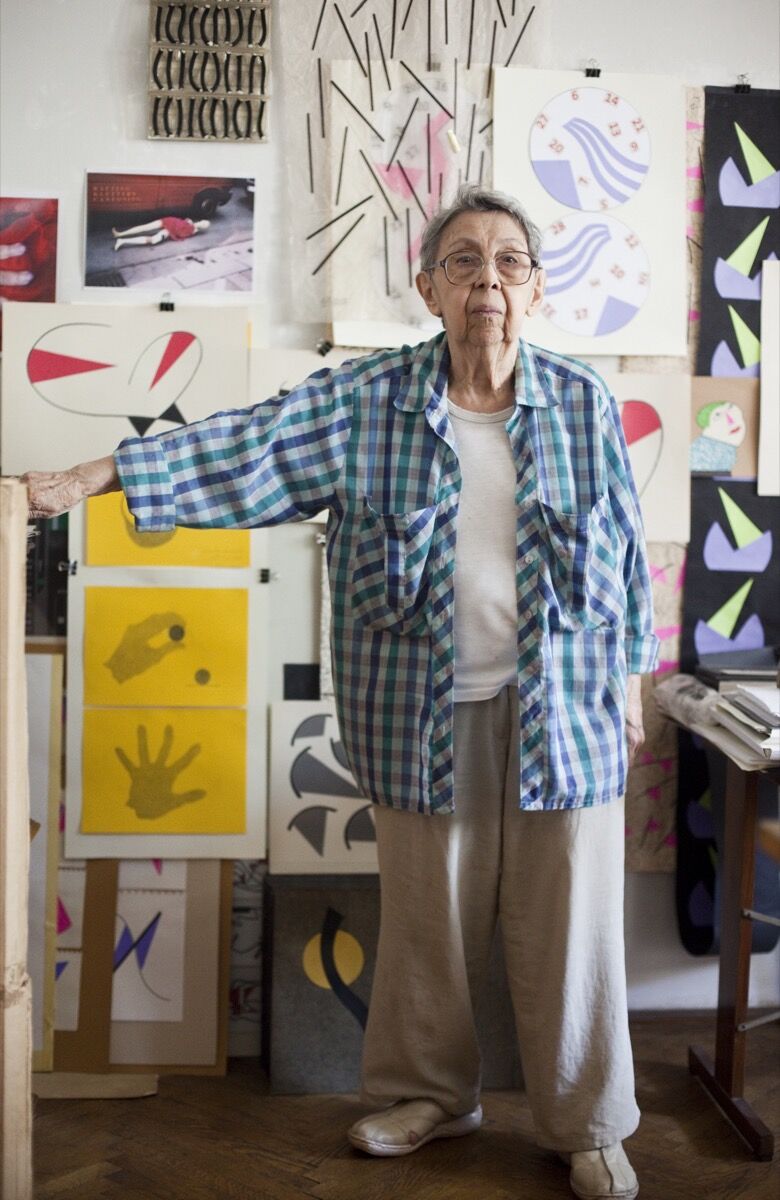 Geta Brătescu in her studio, 2015. Photo by Stefan Sava. © Geta Brătescu. Courtesy of the artist and Hauser & Wirth. 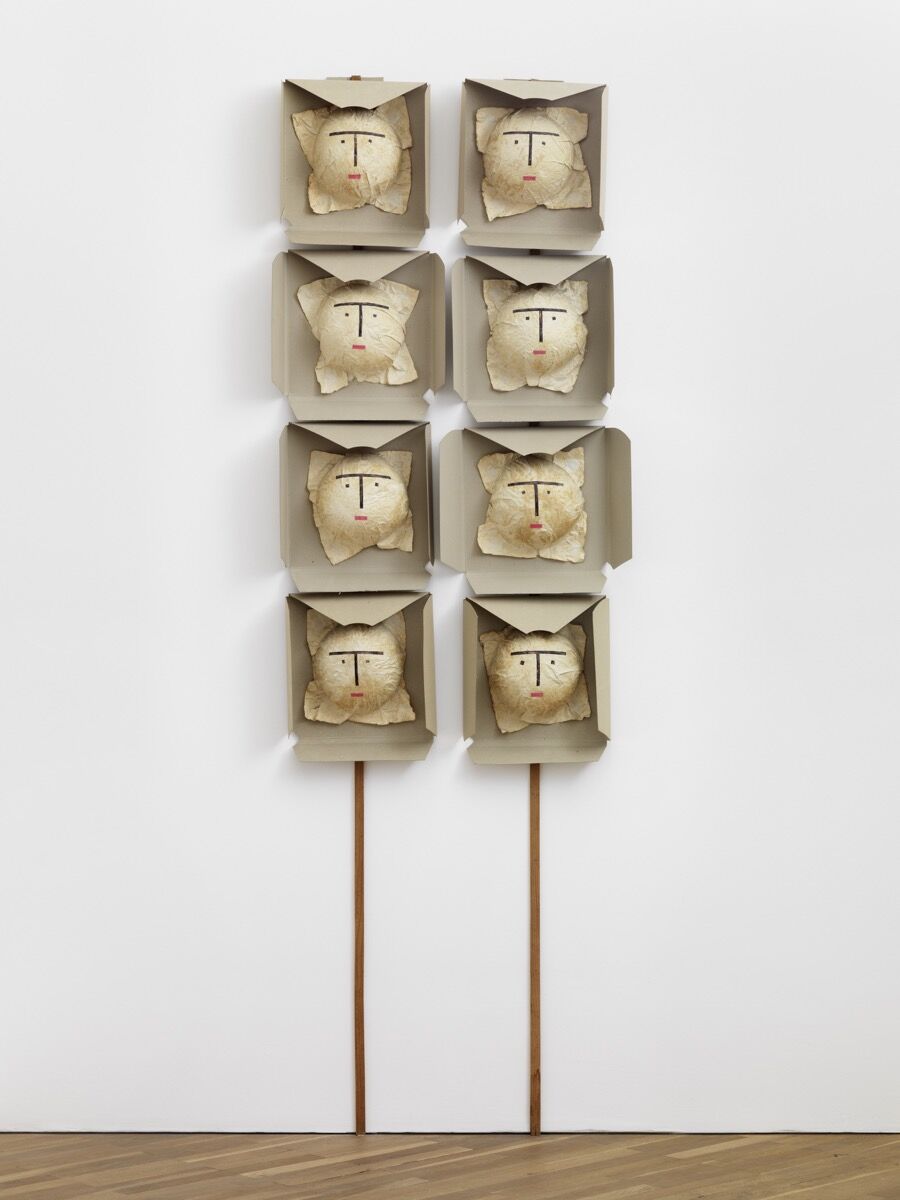 At age 91, artist
Geta Brătescu
still likes to play. She draws with her eyes closed. She collages colorful shapes into ever-evolving patterns. She creates. She invents. She disrupts.
The pioneering Romanian
conceptualist
has always considered art a game—a “serious game,” as she clarified in a 2012 interview with curator Magda Radu. Even during her youth in 1930s Bucharest, she gravitated towards making art in lieu of more traditional children’s diversions. “As a child, drawing was my play,” she told curator Christophe Cherix in 2012. “Later, it became my passion—and something that helped me lead a happy life.”
Brătescu’s drawings are front and center in her latest show, “Geta Brătescu. The Leaps of Aesop,” at Hauser & Wirth. It’s the artist’s first-ever solo in New York, and the most recent in a succession of exhibitions (including representing Romania in this year’s Venice Biennale) that have given the artist long-overdue international recognition.
It also harnesses a powerful undercurrent of Brătescu’s work: her belief in the artist as an agent of freedom, play, and disorder—or “the artist as disruptor,” Radu explained, as she walked me through the installation on a recent afternoon. 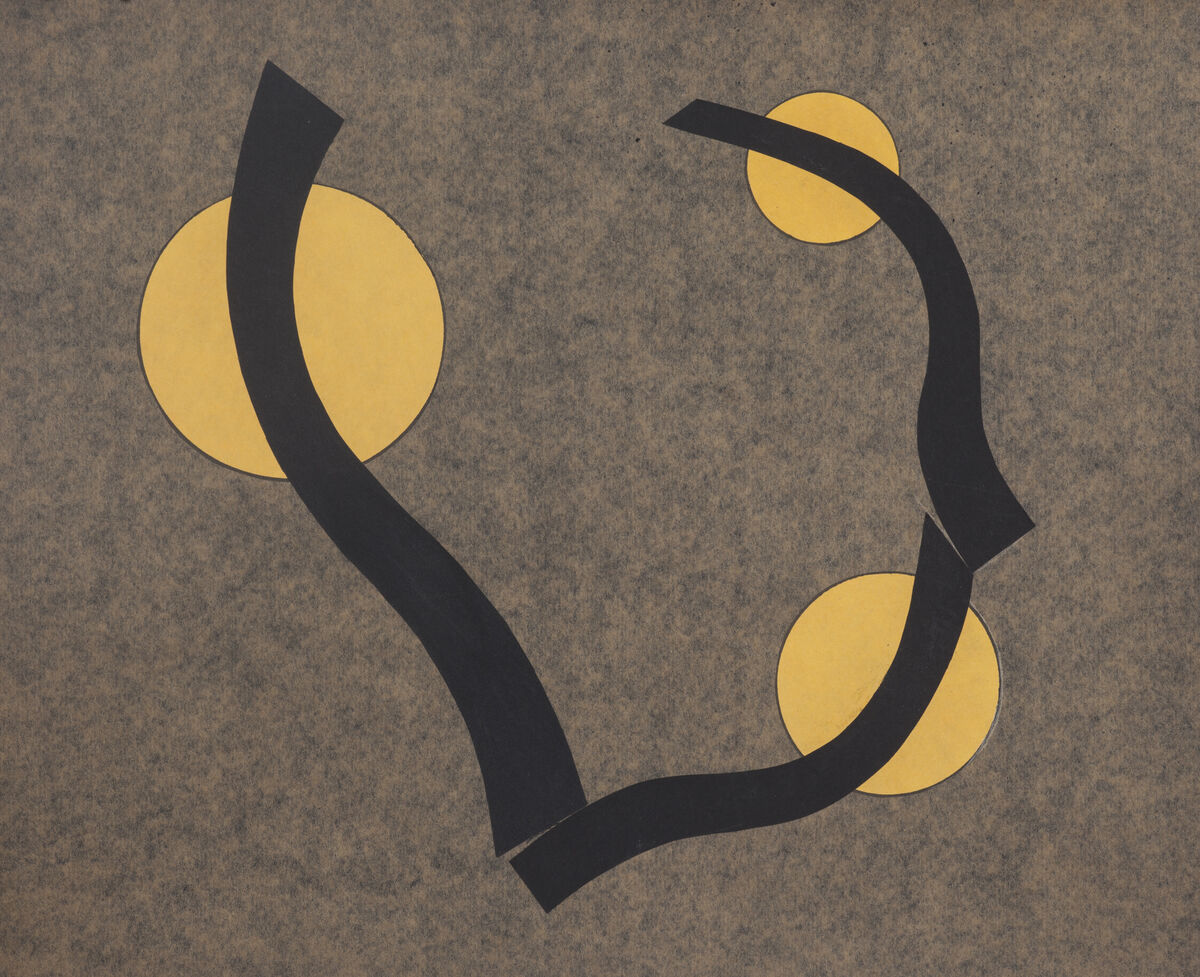 Radu curated both the Hauser & Wirth and Venice Biennale presentations, and she’s spent the last 10 years getting to know Brătescu’s subversive practice, which emerged in Soviet Romania in the late 1940s. In 1948, when the Communist Party took hold of the government and began muzzling free speech—and policing the art being produced—Brătescu was in her early twenties and enrolled at the Bucharest School of Belle Arte.
Under the instruction of famed Romanian painter Camil Ressu, Brătescu had already begun experimenting with a variety mediums when she was kicked out of art school in 1949. That year, a new administration appointment by the Communist Party purged all students they believed had dissident tendencies—Brătescu was among them. But she didn’t stop making work.
Over the next 30 years, during the oppressive rule of Gheorghe Gheorghiu-Dej and Nicolae Ceausescu, she would create tirelessly, producing some of the most important pieces of her career. She moved fluidly between mediums, playing with graphic design, drawing, collage, photomontage, animation, and video. In Communist Romania, where state-sponsored art was nothing short of propaganda, Brătescu’s insistent experimentation was itself a radical act. 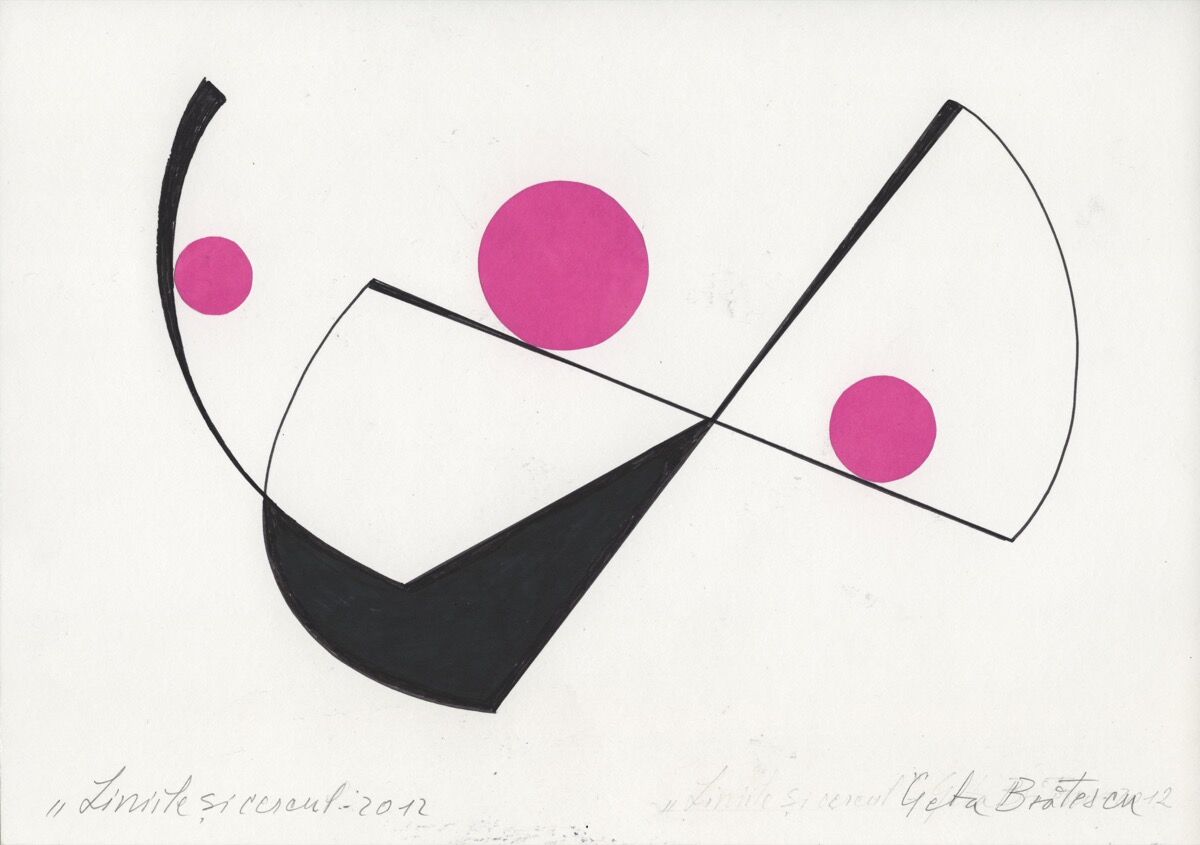 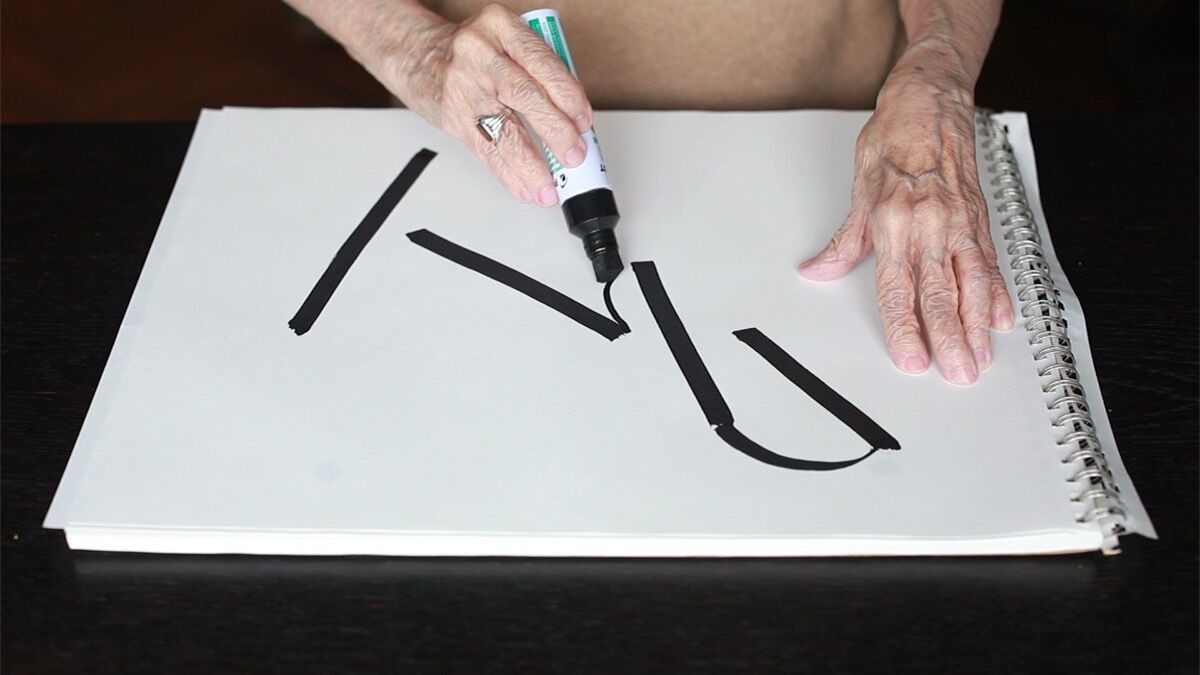 Advertisement
“In the context of Soviet Eastern Europe, assuming this kind of liberty as an artist—this drive to experiment—was a very important, self-assertive statement,” Radu explains. “This was a stance of empowerment—an affirmation of strength and a resistance to restraint.”
A number of the works Brătescu made before the liberation of Romania, in the 1960s and ’70s, are on view at Hauser & Wirth. They evidence not only the artist’s rebellious use of different mediums, but also themes of anarchy and mischief that would become the crux of her practice.
The show draws its title from the ancient Greek fabulist, Aesop, who appears in a number of her early works, three of which are included in the show. Aesop is one of Brătescu’s puckish alter egos—and an incarnation of her belief in an artist’s ability to reveal uncomfortable truths. 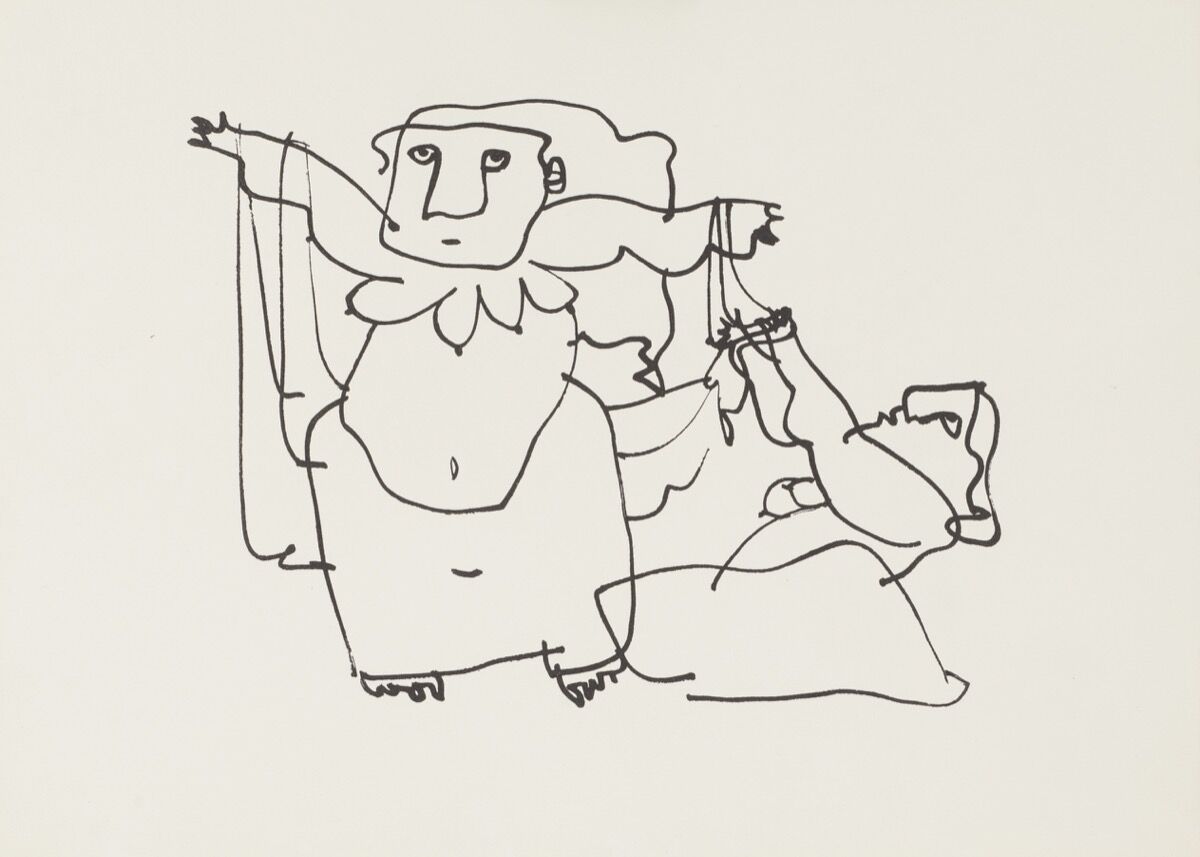 In an animation from 1967, Plimbarea Lui Esop (Aesop’s Walk), Brătescu shows Aesop making trouble in different scenarios. “Through his actions, he reveals structures of power and different kinds of imbalances,” explains Radu of the piece and Brătescu’s long-term interest in the character. “The corrupt nature of the rich, for instance, and how they undermine those less powerful than them.”
“She is very attached to Aesop, because he was a disruptor,” Radu continues. “She writes how he’s a companion in her studio, and how he pushes her to experiment because he has no boundaries, he has no limits—he is a free creature.”
Aesop is just one of the motifs that Brătescu uses throughout her work to embody the freedom and agency of the artist. In a series from 1974, magnets represent the power of creativity to affect change. In one photomontage, Magneții in Oras (Magnets in the City), a cohort of large U-shaped objects sit in the middle of a Bucharest street, disrupting the usual traffic patterns.
A corresponding text, written by Brătescu as part of the piece, describes a situation where the play of energy between them disturbs city life, but at “the same time reminds people of their own power and volition to act,” notes Radu. 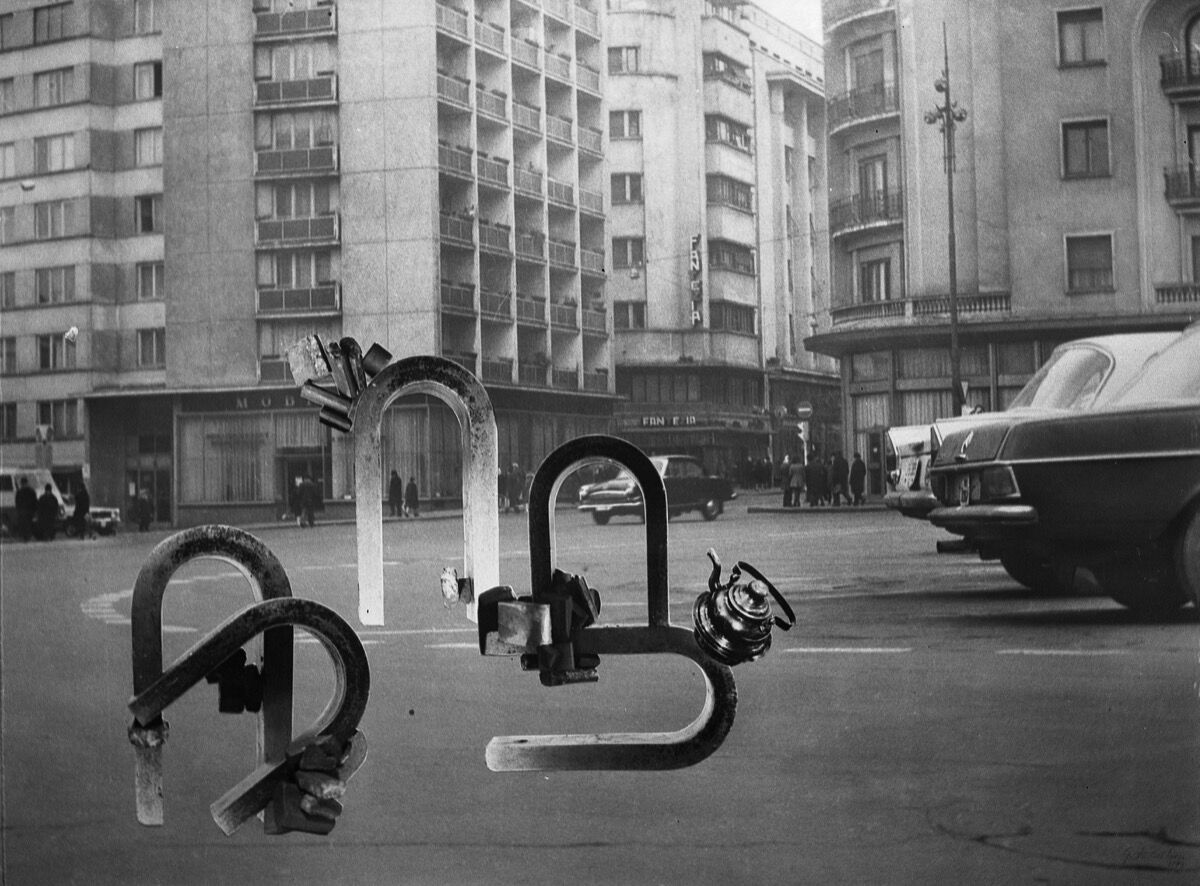 Geta Brătescu, Magnetii in Oras (Magnets in the City) (detail), 1974. Photo by Mihai  Brătescu. © Geta Brătescu. Courtesy of the artist and Hauser & Wirth.

Other pieces in the show reference Brătescu’s own free will more directly. Her most famous work, a film called Atelierul (The Studio) (1978), shows her consuming and claiming ownership of her studio by drawing on the floor and walls, and stacking objects in the middle of the room.
Self-portraits dot the exhibition, too. In the drawing Fard (Make-up) (1988), Brătescu presents herself as a shape-shifting, mask-like figure who has the ability to transform into different characters. On one side, the diptych shows her face in grayscale (save for some bright blue eyeshadow); on the other, it’s in full, heavily-makeuped color.
In a group of later photographs she made between 2002 and 2011, called Alteritate (Alterity), Brătescu is dressed all in black and shown making decisive hand motions that both obscure and reveal her face. Alterity means otherness, and here she takes proud ownership of her role as both an artist and a woman—groups considered “other” in the climate in which she came of age. 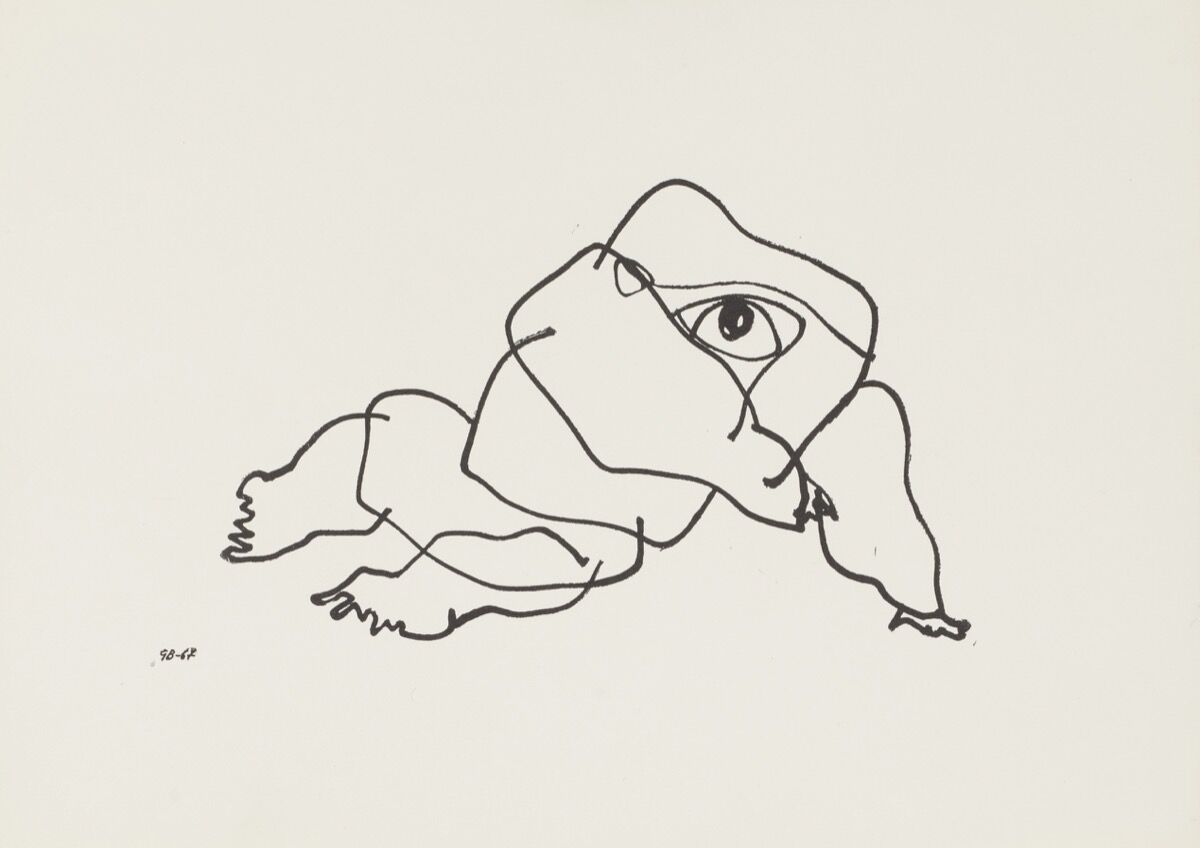 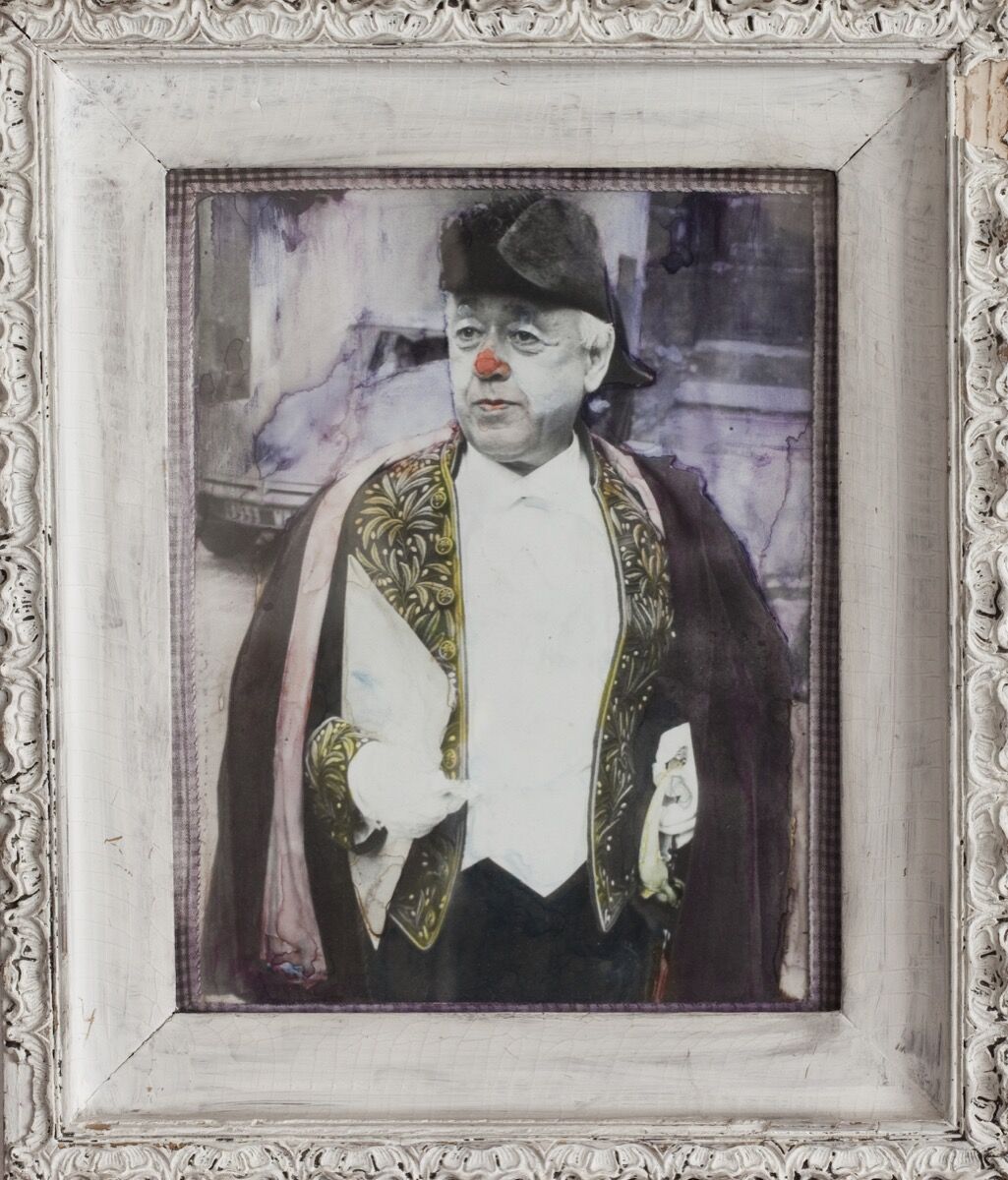 These portraits raise another important theme in Brătescu’s work: the self-determination and artistic powers of women. While she worked in a patriarchal society, she was “never critical of it,” explains Radu. “Instead, she was always affirmative, saying ‘I can do this, I can express myself in so many mediums, I can create in any way I want.’ This idea of affirmation of female creativity has always been very important to her.”
In a recent series of drawings, made between 2003 and 2008, Bratescu renders the female form with her eyes closed. Across several pieces of paper, a female body dances ecstatically, assumes different positions, and occasionally intertwines with other figures. The sense of movement that Brătescu channels through the figure’s body feels completely unfettered.
On one page, the woman seems to converse with a bird, another of Brătescu’s alter egos. “The bird is a companion in her mind,” explains Radu. “And a metaphor for the ‘thought that takes flight.’” It is also an apt symbol for Brătescu’s vital practice: one that insists on the artist’s role as an agent of free thought, and a perennial—and joyful—disruptor.
Alexxa Gotthardt
Related Stories