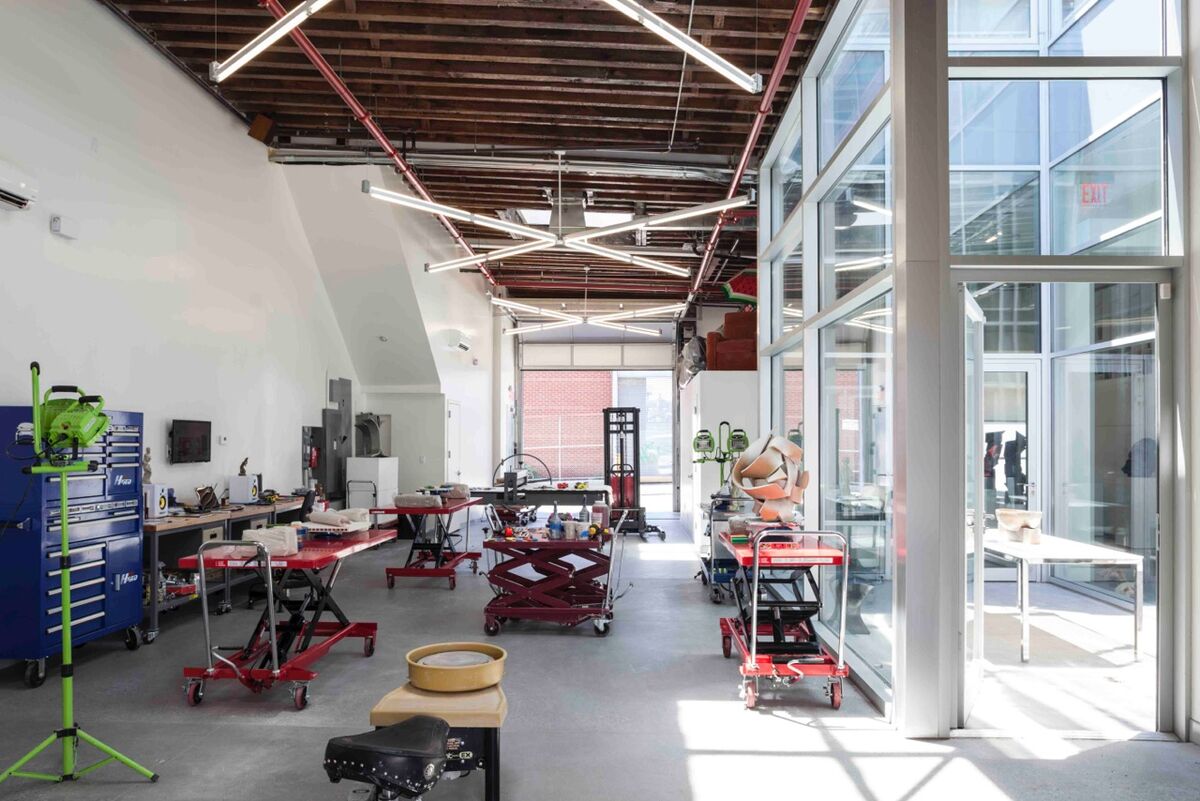 If you’ve ever taken a ceramics class, you know that there’s ample opportunity for failure: Clay can dry too quickly and crumble; a piece may shrink in the kiln and emerge with cracks; the firing can go awry, causing glazes to turn murky colors. The slightest human error or unforeseen environmental changes can lead to undesired results, or ruin beyond repair—even for the most accomplished artists. So when I heard that Brooklyn artist John Mosler estimates that his success rate hovers around a lofty 95%, I wanted to see for myself.
“Apparently a
Louise Bourgeois
spider was created here, though that may be an urban legend,” Mosler tells me on a sweltering Monday morning as we meet in his studio on the edge of Gowanus in Brooklyn. A former industrial welding business, its blue facade gives way to a sleek ground floor that transitions from gallery space, to pantry, entertainment space, then, over the threshold of a small glassed-in courtyard, to state-of-the-art studio.

Mosler bought the building in 2010 and commenced a gut renovation designed by his wife, Jean Won Mosler of Maum Design; the structure was designed by Maum Design in conjunction with Marvel Architects. It’s lasting evidence of Mosler’s former life as a Wall Street financier, a 25-year career that he cut ties with in 2007, when he quit his job at Wachovia. “It wasn’t just a question of getting bored,” he says of the decision to pursue art full-time. “There were opportunities coming up; I reached a moment where I said, ‘Okay, this is my true nature.’”
Mosler estimates that his income today is one fortieth of what he earned previously, and ironically, like at the beginning of his finance career, he’s working 100-hour weeks. His former career not only left him with great funds, but also a high tolerance for risk and an insatiable appetite for realizing big ideas. It’s these traits, along with a slew of innovative materials and techniques, that account for Mosler’s high success rate.
On the day I visit, there are six works in progress in the studio’s main space, all sitting on a moveable work table that allows for easy transport. Each is paired with glaze tiles that foretell their future surfaces (colors include coral, tangerine, white, and turquoise). A powerful pug mill, which Mosler uses to mix his clay, sits in one corner; across the room is a slab roller, and a stack of moist slabs of clay covered in plastic. The space is free from the layer of dust that frequently lingers in ceramic studios. “This is about sculpture, it’s not a ceramic studio,” Mosler emphasizes. “This is a sculpture studio, I am a sculptor.”

Advertisement
Mosler and two studio assistants are sanding unfired sculptures, which will feature in a November show at the studio’s gallery space. “These pieces are so tenuous as they are, to sand them in this state is insane,” Mosler tells me. Standing two to five-feet tall, the works are made from slabs of clay that have been cut and sculpted into large loops and cylinders that are connected in complex configurations; they represent new territory for Mosler, and are inspired by his ideas on the interconnectedness of global society. The reason these forms are even structurally possible, though, is because they’re not made from ordinary clay. Like nearly all of the contents of the studio, the clay is custom, a unique recipe Mosler developed through trial and error, and consultation with experts and other artists working with ceramics. “Normal clay would spread, you’d see cracks. This combination, which is 10 years in the making, is very plastic, very flexible, very strong,” he explains as he gives me a small piece; it has the consistency of rubber or chewing gum. “It feels like porcelain but it’s strong like concrete.” The clay is made from two types of stoneware and infused with flax fiber, another bonding agent, and grog (pulverized unglazed pottery).
Mosler has developed a rapport with esteemed colleagues and artists like Anton Reijnders, David East, and
Chris Gustin
, in addition to professionals who work at manufacturers of kilns, glazes, and clay. He’ll turn to them for bits of wisdom, or to lend a hand in problem-solving an issue. Nothing about Mosler’s practice is proprietary; he’s keen to share his findings with fellow artists. And no idea is too big. “I often say, ‘Okay, this is what the piece requires,’ and then work backwards to make it happen,” he says. “It’s not a coincidence that I have a history of pushing the limits or running into seemingly insolvable problems and finding a way.” 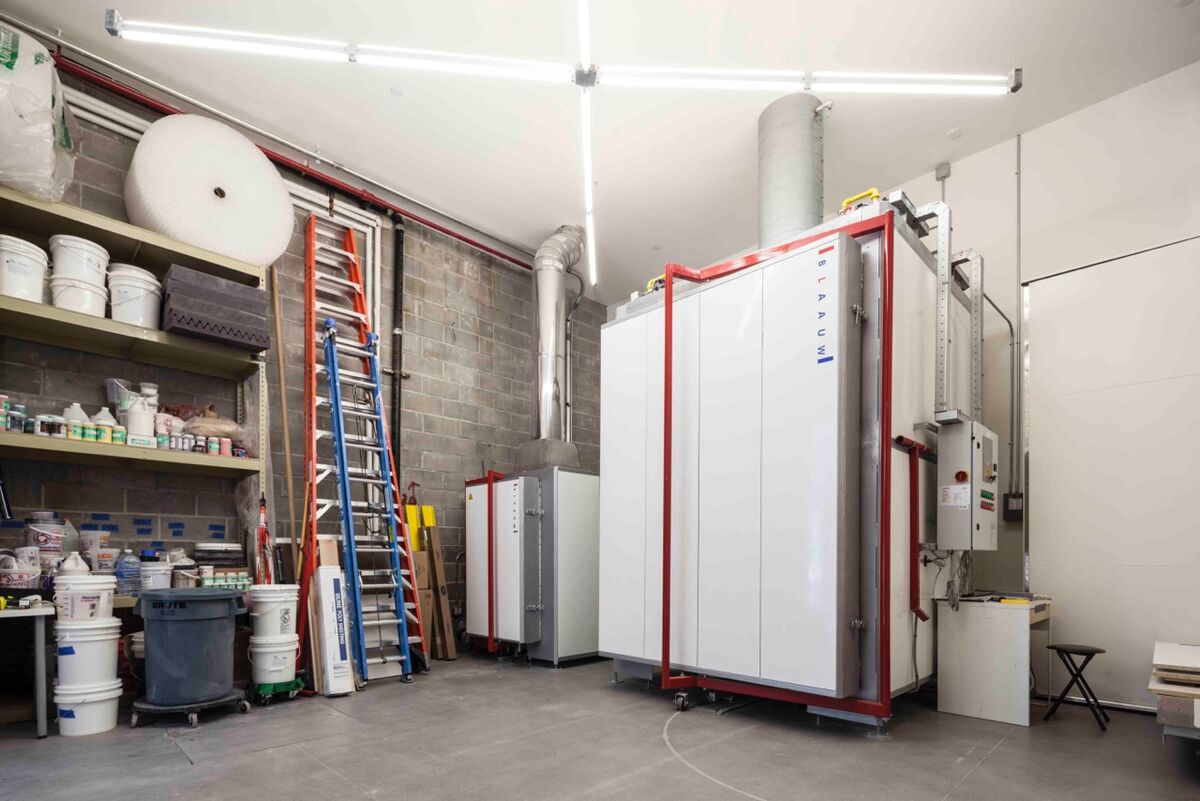 The centerpiece of the studio’s back room is a giant custom-built gas kiln by the Amsterdam-based company Blaauw, which primarily works with schools and production companies. It’s 14 feet tall, and Mosler fires it at up to 2300℉. A Captain America action figure stands guard before the hulking machine. “I’m a weird mix of athlete and crazy eccentric dude,” Mosler explains with a laugh, and adds, “Look at my shoes!” (He’s wearing technicolored clogs.) But this kiln is no joke. Not only remarkable for its size, it’s one of the company’s first top-burning gas kilns—gas filters in through a vent on the kiln’s roof (instead of the back, which is more standard), allowing for a more even distribution of heat. Additionally, it’s hooked up to a computer that generates a graph that allows the user to track progress of the firing, to ensure it’s on track and make adjustments if it isn’t. Mosler can access the data from his laptop upstairs, which is especially useful since his firings last 41 hours (similar kilns are normally run for nine to 11 hours, he says). “It’s  a really powerful machine and I need it to go really slow at very specific temperatures,” he explains. Next to us a cart with two pieces are being prepared for firing, mock-ups that will be used as guinea pigs for the new works.
Despite all of this, ceramics are just a stepping stone for Mosler. He’s set his sights on sculptures that are 20 or 30 feet tall and installed around residential or office buildings, works that will connect with the public and spread his message of global interconnectivity. He’s been working with an expert at scaling artworks, who will help him create large-scale works that he can pitch to real estate developers. He hints that he has strong leads already, and adds with a grin, “we have a long way to go, but confidence is high.”
Casey Lesser is Artsy’s Lead Editor, Contemporary Art and Creativity.
Related Stories