A Sprawling, High-Tech Exhibition Takes Over an Abandoned Office Space in London 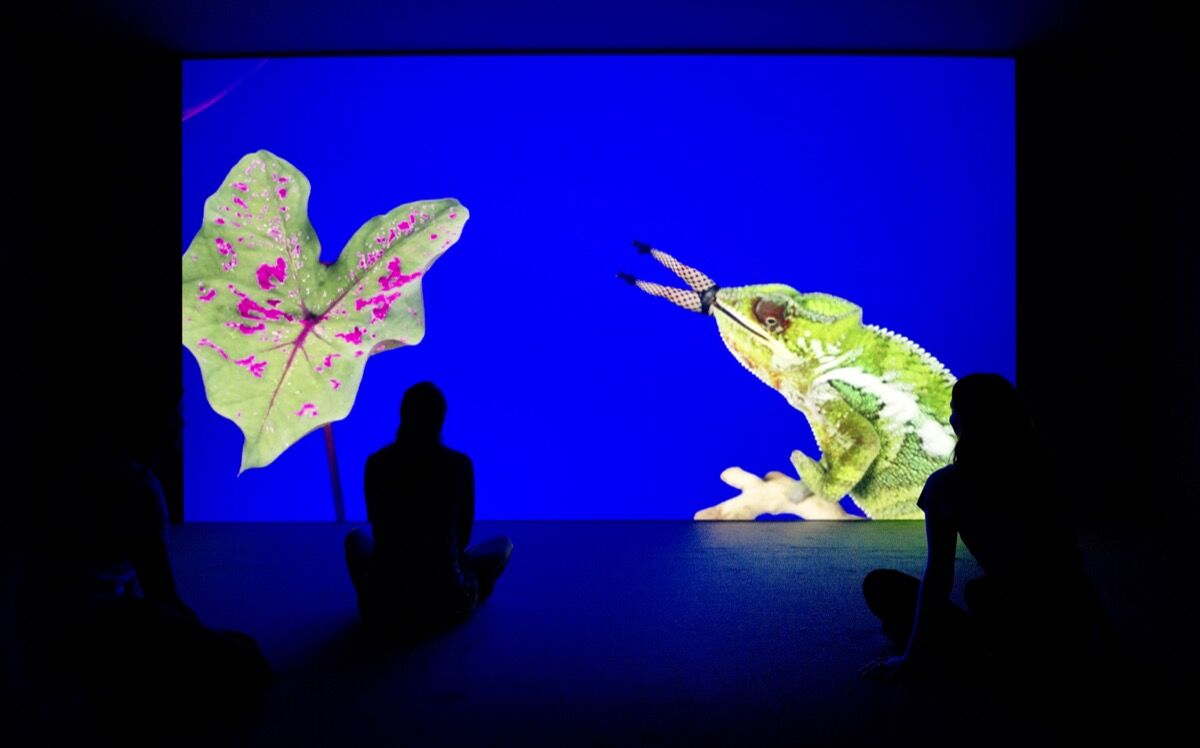 Enter the disused office block at 180 The Strand, along one of London’s central arteries, and you’ll currently find 10 audio-visual artworks sprawled across the vast space. Titled “The Infinite Mix: Contemporary Sound and Image,” the show explores the electrical foundations of its multi-screen installations, holograms, and 3D video projections. It’s an off-site exhibition from The Hayward Gallery—whose building is currently closed due to a major two-year refurbishment—in collaboration with The Vinyl Factory. Unlike other moving image surveys of this type, which can be monolithic or overtly academic, this one is lively and full of variety.
The Hayward’s Ralph Rugoff, who curated the show, is known for his ambitious, experiential exhibitions. In the past, he’s hosted playful, interactive exhibitions from
Carsten Höller
,
Martin Creed
, and
Ernesto Neto
. Over the last couple of years, The Vinyl Factory’s site in the Brewer Street Car Park has also emerged as a space for engaging audio-visual works, notably launching with
Richard Mosse
’s 2013 video installation The Enclave.

Drawing on the formula employed by popular, immersive cinema-cum-theater experiences like Sleep No More, visitors to “Infinite Mix” rove freely around the building in order to find each work. Martin Creed’s Work No. 1701 (2013)—a short film shot from a single camera position, showing a succession of people crossing the same street in New York—is positioned near the entrance to the exhibition. Creed has commented that life can often look like a dance, and akin to much of his other video work, a pop song written and performed by the artist accompanies it. It illustrates the beauty in the infinite variety of motions with which people move through the world.
A similar notion of limitlessness carries through
Stan Douglas
’s Luanda-Kinshasa (2013). Mimicking the documentary format, Douglas presents an epic, six-hour-long fictional jazz-funk band recording within a set carefully crafted to resemble a 1970s recording studio. The camera and the audio mix work in tandem, each time highlighting the sound of the musician the frame focuses on. 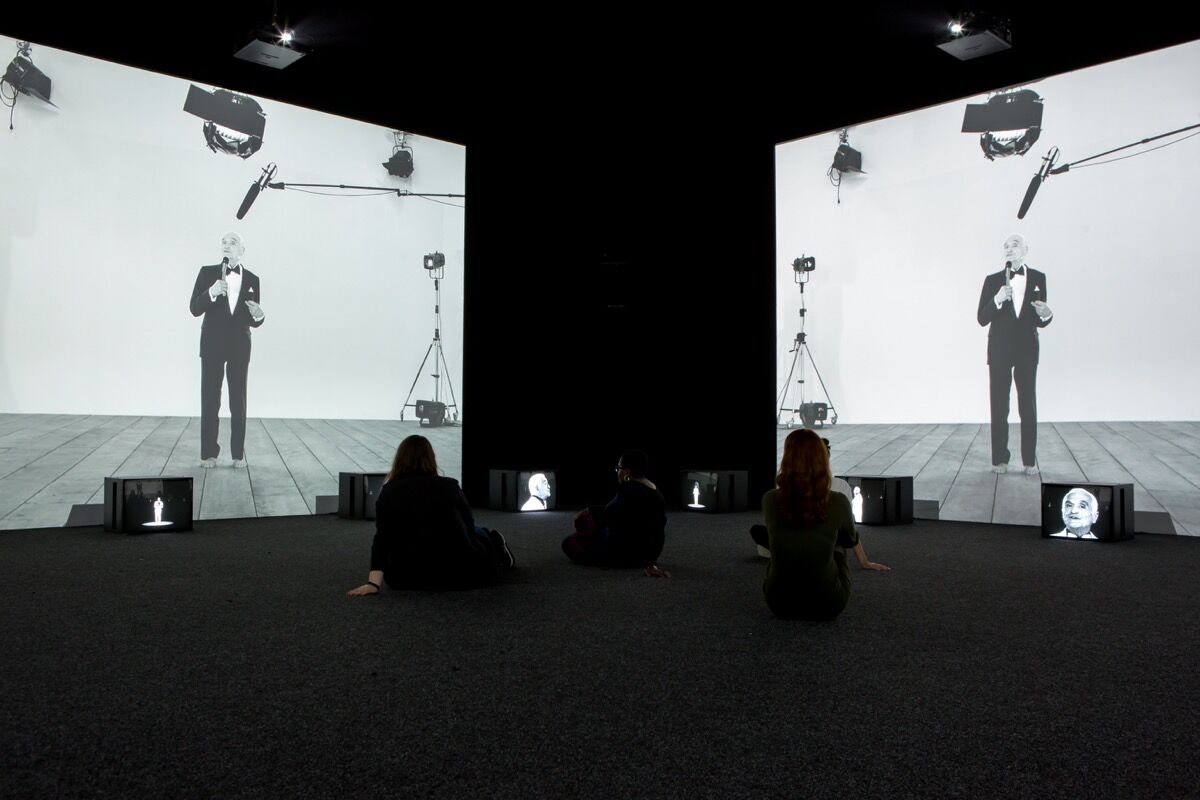 Advertisement
Ugo Rondinone
and
Dominique Gonzalez-Foerster
, meanwhile, evoke the intimacy and power of performance in their work. Rondinone’s installation THANX 4 NOTHING (2015) is made up of four large-scale video projections and 16 monitors showing black-and-white footage of American beat poet and artist (and Rondinone’s longtime partner)
John Giorno
delivering an emphatic meditation on life, age, and desire. For OPERA (QM.15) (2016), Gonzalez-Foerster has created a luminous, hologram-like projection of herself in the guise of opera singer Maria Callas (1923-77). Situated in a dark corridor, only viewable behind a rope from a distance of 30 meters, the ghostly apparition flickers and lip-syncs to arias from Cherubini, Verdi, and Ponchielli.
In the U.K. debut of
Kahlil Joseph
’s hypnotic m.A.A.d. (2014), the artist creates a tribute to the people and streets of Compton, made in response to Kendrick Lamar’s 2012 album good kid, m.A.A.d city. The film combines home videos shot by Lamar’s uncle in 1992 with footage of police violence, shots of everyday life, and dramatic, constructed scenes imbued with magical realism. Abstract and distorted lyrics from the album serve as bursts of narration, creating an original and powerful cinematic vision of the community.

Jeremy Deller
and Cecilia Bengolea’s collaboration, Bom Bom’s Dream (2016), follows the Japanese dancer Bom Bom on her journey to Jamaica to participate in a dancehall competition. It’s interspersed with low-fi CGI and special effects, and the exhibition’s organizers liken it to a contemporary Alice in Wonderland. The impulse of remixology is also present in
Cameron Jamie
’s Massage the History (2007-9), a bizarre film composed of 35mm- and mobile-phone footage of young men in Alabama grinding erotically on living room furniture. In the final cut, the hip hop that the men originally danced to was replaced with a Sonic Youth track from 2009, creating an uncanny distance for the viewer.
Films by
Rachel Rose
and
Elizabeth Price
offer ambitious, updated versions of the “cinematic essay,” which typically uses silent footage with a self-reflexive voiceover. In Everything and More (2015), which premiered last year at the Whitney Museum, Rose mixes silent footage of crowds at an electronic music festival with edited scenes shot in a zero-gravity simulating neutral buoyancy laboratory. The voiceover is a recorded narration about sensory disorientation from the U.S. astronaut David Wolf. Price’s K (2015) goes one step further, bringing together multiple, disparate elements. Text, image, synthetic voice, and a percussive soundtrack are interwoven in order to create an unsettling, sci-fi narration about a fictional group of professional mourners. 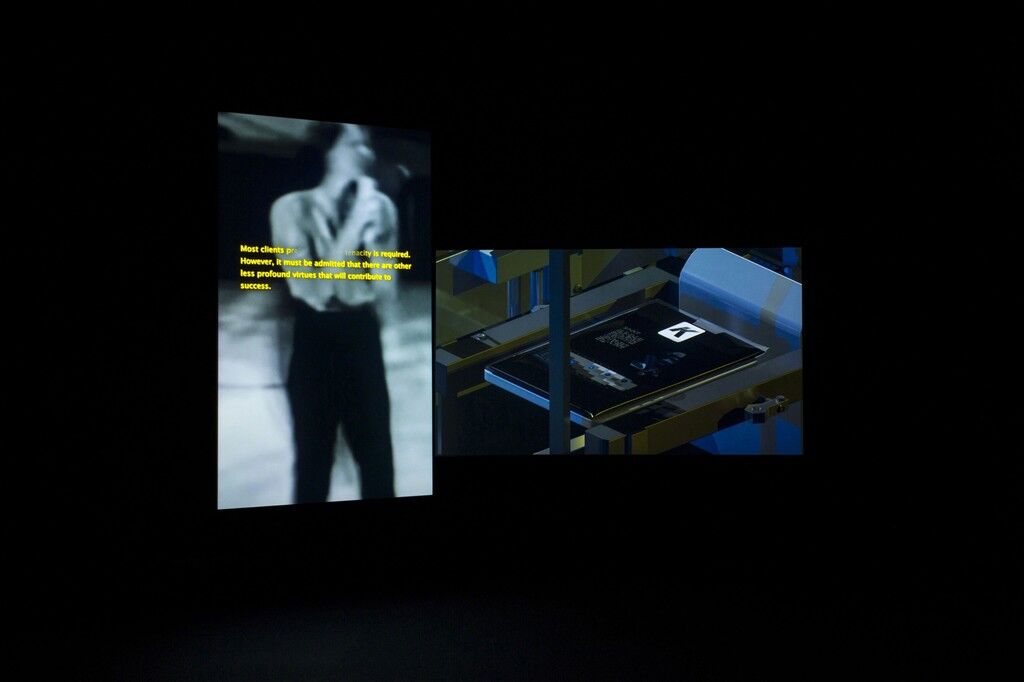 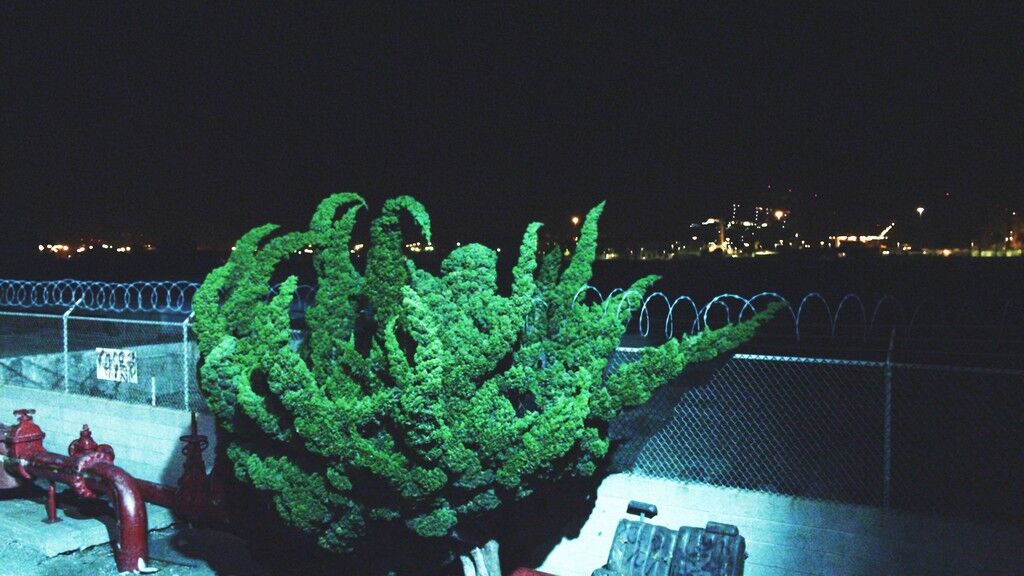 Cyprien Gaillard
Nightlife, (film still) 2015 , 2015
"The Infinite Mix: Contemporary Sound and Video" at Hayward Gallery at Southbank Centre, London
The exhibition finishes in the cavernous basement car park with
Cyprien Gaillard
’s 3D projection Nightlife (2015), a work that deals most explicitly with culture, history, and politics. It oscillates between the themes of racism in art history, the 1960s–’70s Weather Underground Organization terrorist group, and Jesse Owens’s victories at the Nazi-sponsored 1936 Berlin Olympics. The nocturnal imagery of swaying trees and drone-captured footage of exploding fireworks suggest ways in which nature, landscape, and public space involuntarily contain these latent historical memories.
Expanding beyond linear visual narratives, “The Infinite Mix” encourages a multifaceted way of thinking about the medium of video, as something hybridized, three-dimensional, and in a perpetual state of reinvention. The sensory experience lingers for days after one wanders back out onto the busy thoroughfare of The Strand.
Philomena Epps
Related Stories