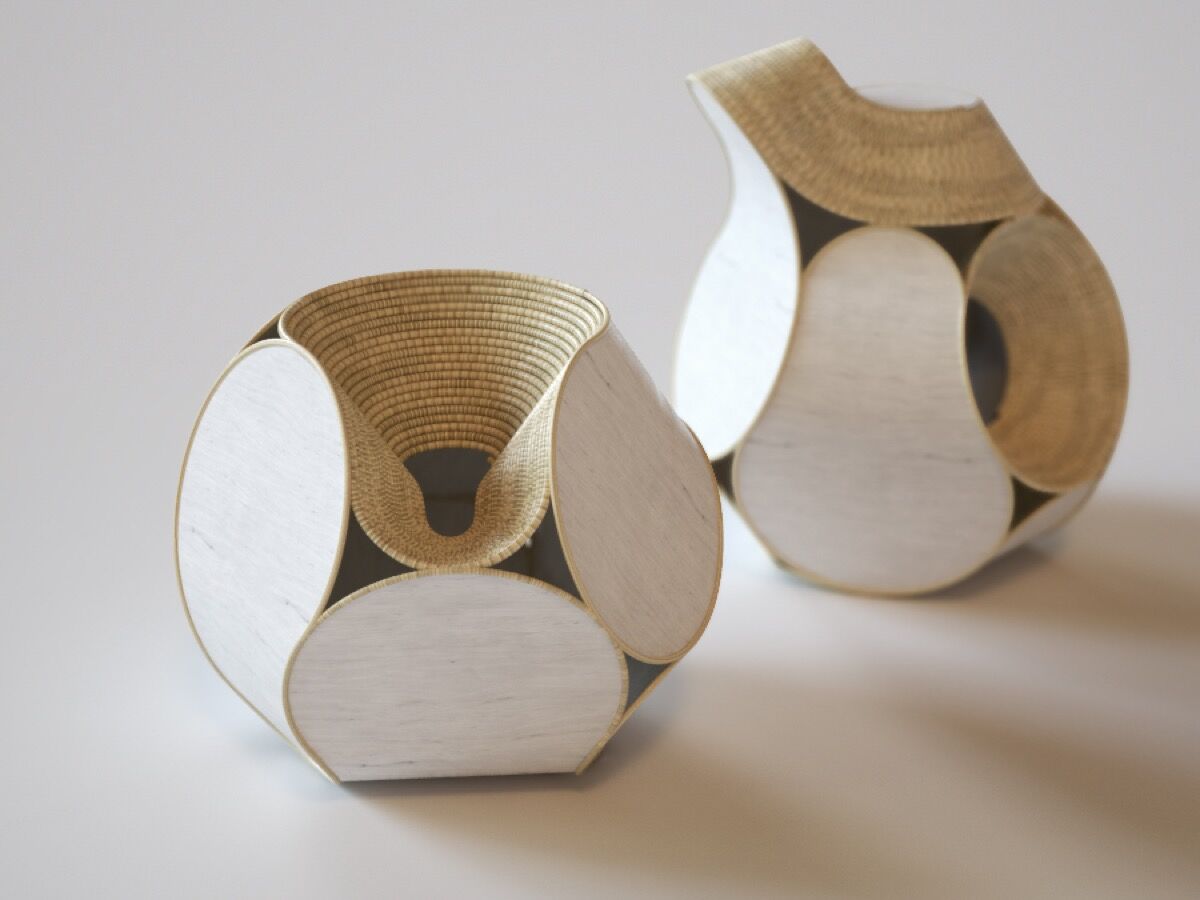 When is a basket like a building? For the New York- and Tucson-based studio
Aranda\Lasch
, the question isn’t a riddle—it’s the crux of their new exhibition, opening October 29th at the Museum of Contemporary Art in Tucson, Arizona. Best-known for their experiments with discrete, modular forms—tessellating pavilions, a chair composed of a single line, shops in Miami with pleated facades—the studio is currently focused on the link between algorithmic design and craft.
“We’re connecting the weaving practices of the Native American tradition to our practice as architects,” Ben Aranda told me during a recent visit to his Nolita studio. “There’s something they share deeply—weaving is a material and social practice performed through ritual, and architecture can be understood in much the same way. Both use simple processes like repetition and iteration.”
The exhibition, titled “Meeting the Clouds Halfway,” is a collaboration between Aranda\Lasch (Benjamin Aranda, Joaquin Bonifaz, and Chris Lasch) and Terrol Dew Johnson, a Tohono O’odham Nation activist, artist, and expert basket weaver. This blending of traditional and contemporary design takes its inspiration from the Sonoran desert, which covers a large swath of Arizona, California, and northwestern Mexico. The Sonoran is lush—a rainforest compared to the high deserts like the Mojave—and rich in natural resources. “We wanted to showcase how Native communities express the desert through material and practice,” Aranda explains. To do so, they limited their materials to four found in the desert: grass, wood, copper, and rock.

The resulting works—tables of copper and rock, baskets that hang from the ceiling or rest on plinths, and a rock dome that is large enough to serve as a shelter and is composed of a new ecologically friendly type of engineered stone—look both beautiful and vaguely improbable, like visual models of quantum physics. “One of the main tenets of the show was a 3D coil,” Aranda explains. “It’s still a weave in the way a traditional basket might be, but takes on a new character.”
Coiling—the process of taking a strand and wrapping it around itself to produce a surface—is one of the oldest weaving techniques, but the collaborators are using it in new ways. Instead of lying flat, their coils extend into space, creating sinuous and seemingly endless loops. The grass baskets they’ve created are slender and ethereal, while their wood and rock baskets employ solid planes, creating semi-enclosed forms that are more surface than edge. Their copper baskets include a fine metallic mesh connecting the loops.
None of the baskets in the exhibition function as vessels in the conventional sense, but they have a more profound utility. “Our watershed moment in this project was when Terrol said that a basket is essentially something that holds a conversation,” says Aranda. “That was his definition.” The practice of creating baskets is inherently social, an activity that produces opportunities for dialogue among collaborators. 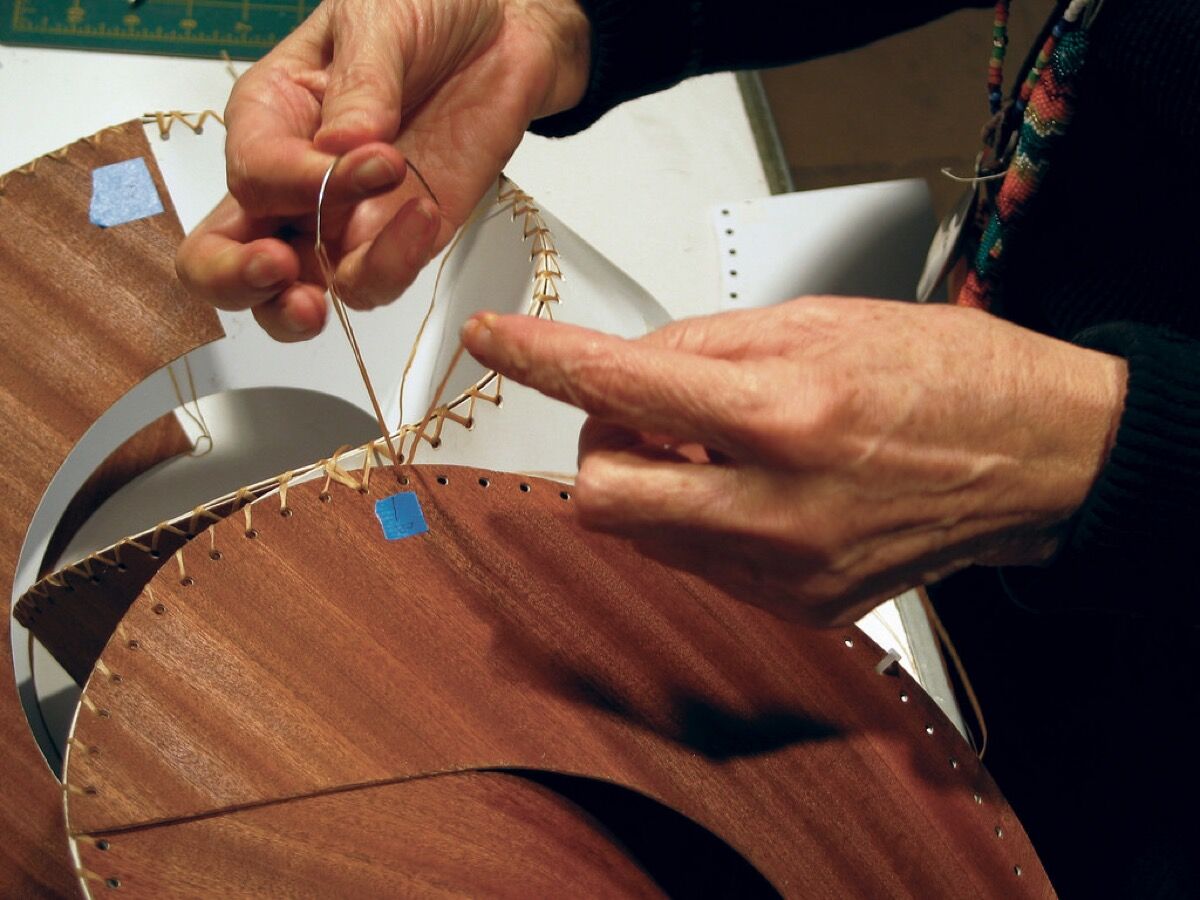 Advertisement
“The baskets were about the relationships around the object, more than the object itself,” he adds. “That allowed us to open up the idea of what a basket could be.” In fact, the exhibition is the product of a long and productive relationship between Johnson and the studio. Three of the baskets they created together in 2006, each an elegant knot of aluminum, branches, or wood, now reside in MoMA’s permanent collection.
Alexandra Cunningham Cameron, the curator of “Meeting the Clouds Halfway,” confirms that one of the exhibition’s goals is to elicit dialogue. “There is a tangible current of community and activism to this show,” she explains via email. “The pieces in it are starting points for conversations about plans for living design ideals, embracing both tradition and technology.”
What about the influence of artists like
Robert Smithson
or
Michael Heizer
, who used the desert as their medium? Cameron says that while there are material and environmental parallels, the mechanics and intentions of the work are very different. She is also emphatic that the spirit of the show has little in common with the heroic solipsism of land art: “Michael Heizer is a cowboy. He works in isolation. He doesn’t give a fuck. Terrol, Ben, and Chris give two fucks. Three, four, five.”

Indeed, all of the collaborators are deeply invested in community. In addition to preserving traditional basket weaving techniques, Johnson’s organization, Tohono O’odham Community Action, focuses on bringing stories, rituals, and native foods back to the community. His projects include the Desert Rain Café, a restaurant that is addressing the high diabetes and obesity rates in Native children by reintroducing families to healthy, traditional Tohono O’odham dishes.
For their part, Aranda\Lasch have created a new kind of rock for the exhibition. The studio is working with the (aptly named) scientist David Stone, inventor of the formula for ferrock, a new material five times stronger than concrete. As ferrock oxidizes, it captures carbon dioxide from the air, making it a potentially carbon-negative building material. It will be used to create the rock baskets, as well as a dome structure of overlapping petal shapes that will also be on view in the exhibition. “We want to use this show as an opportunity to prototype a new building material that could be used on the Tohono O’odham reservation in Sells, Arizona,” Aranda says. They imagine the dome being used as a seed bank, to preserve endangered native plants. With a touch of alchemy, Aranda, Lasch, and Johnson may just help to build a bridge across cultures, and keep the traditions of the Tohono O’odham Nation alive.
Ariela Gittlen
Related Stories