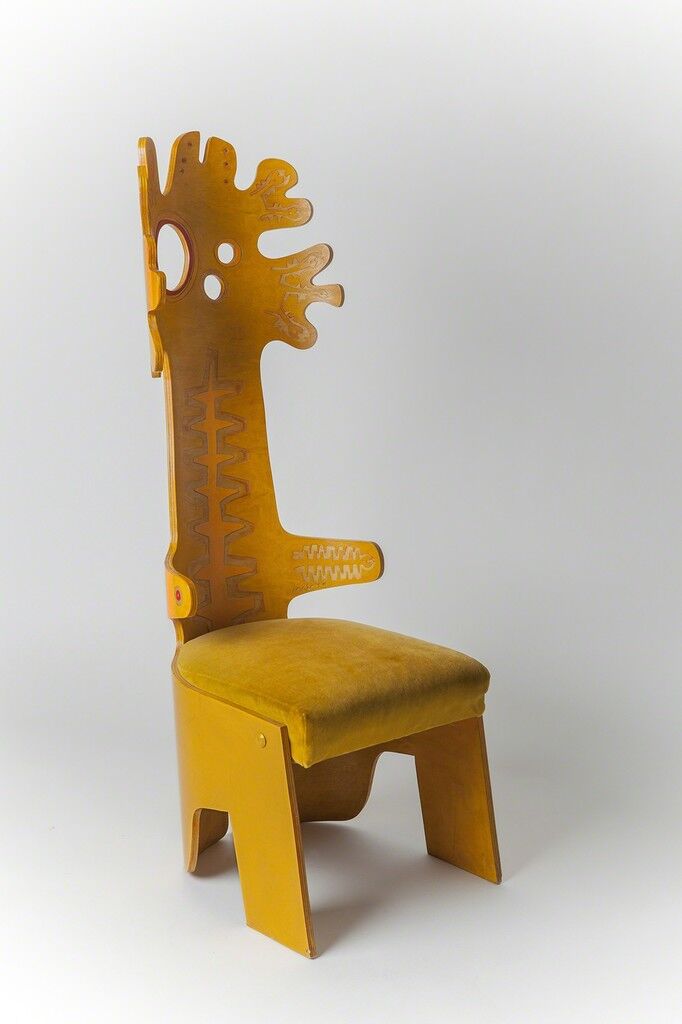 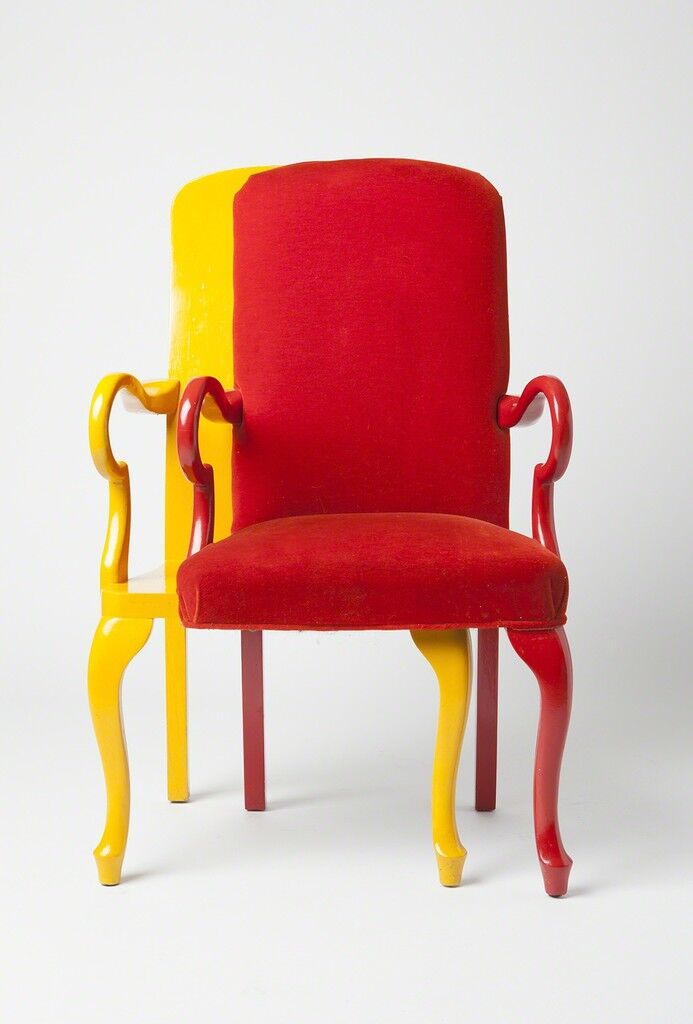 Main + Main
Queen Anne, Queen Anne, ca. 1980
Magen H Gallery
In a 1986 article, the New York Times covered an emerging “downtown style”—a “brash celebration of the moment” fusing art and design in a manner that was altogether “irreverent, fun, awkward, colorful, charged with energy and purposely in dubious taste.” At the helm of this movement was a gallery, Art et Industrie, which had been refining an off-key approach to work straddling the boundaries between art and design for almost a decade, under the guidance of gallerist Richard Kaufmann. For the first time since the gallery closed its doors in 1999, the work is brought together in a retrospective show at Magen H Gallery in New York. 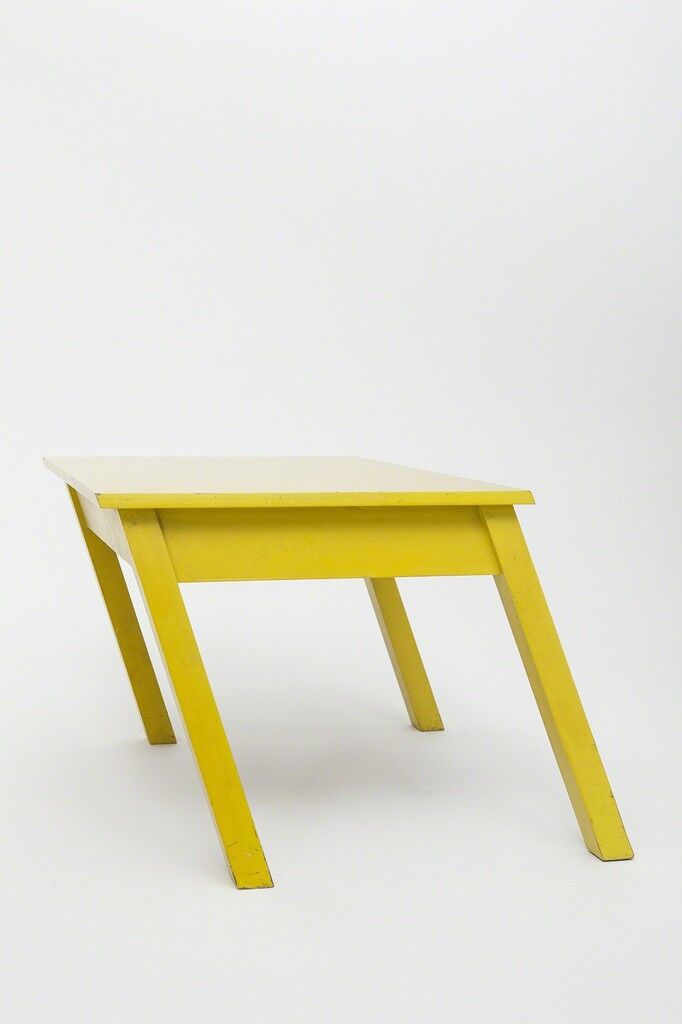 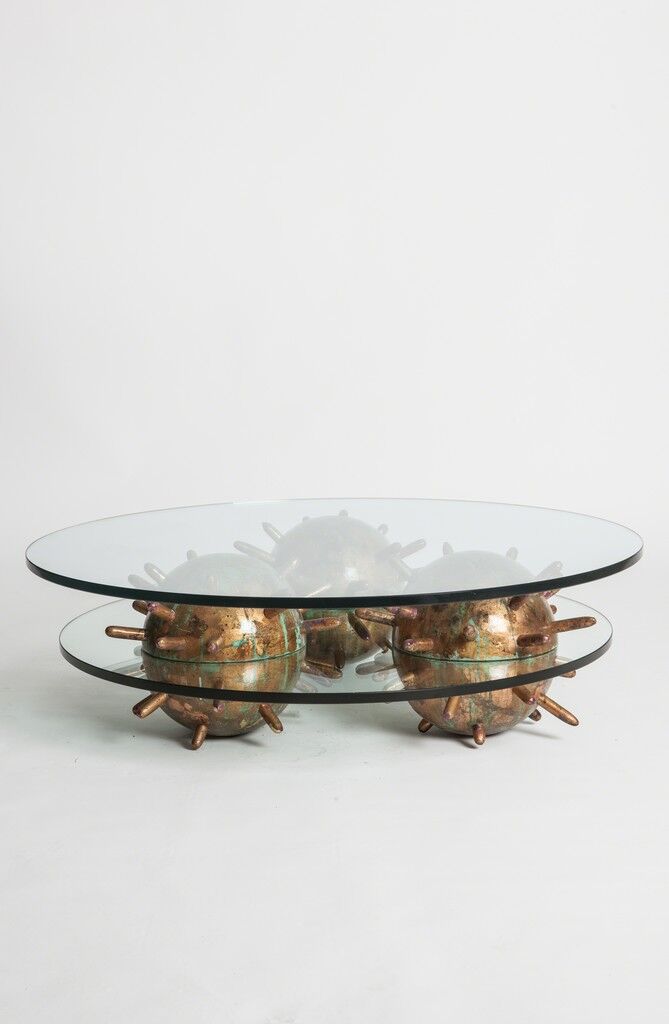 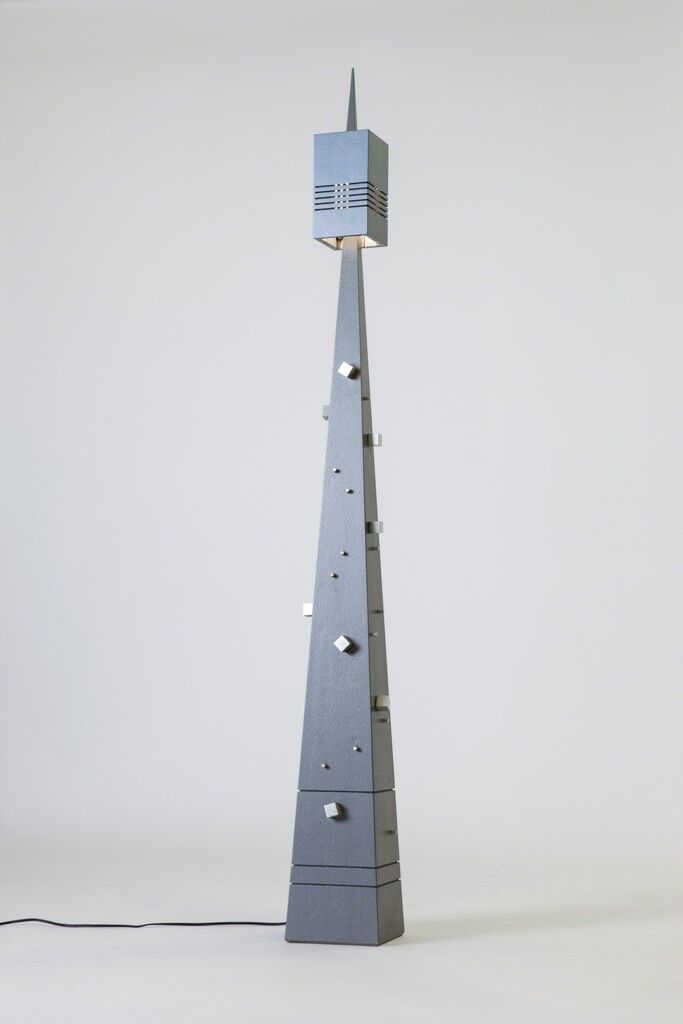 James Evanson
Pinnacle floor lamp, 1985
Magen H Gallery
At its inception, Art et Industrie was a visionary concept that Kaufmann believed could integrate a historical lens with the emerging aesthetics and processes of industrial objects. “There was a particular enchantment with the late-19th-century Aesthetic Movement, as well as with the myriad of objects born of Arts and Crafts, Art Nouveau, and Art Deco,” Kaufmann recently told to Artsy. “Looking to the future, there was the sweet spot I saw for a new type of object, somewhere between radical Italian design and new American art at their avant edges.” Though the concept of Art Furniture has had time to mature and flourish since then, with the proliferation of fairs like Design Miami/, Collective Design, and The Salon Art + Design, at the time there was a rift between the two worlds. “Frankly, that is still a mystery to me,” reflects Kaufmann. “It’s about at the same level of why they can’t get anything done in Congress between the Republicans and the Democrats. These two camps were diametrically opposed but we didn’t want to bring them together, we just didn’t think there needed to be such a division.” 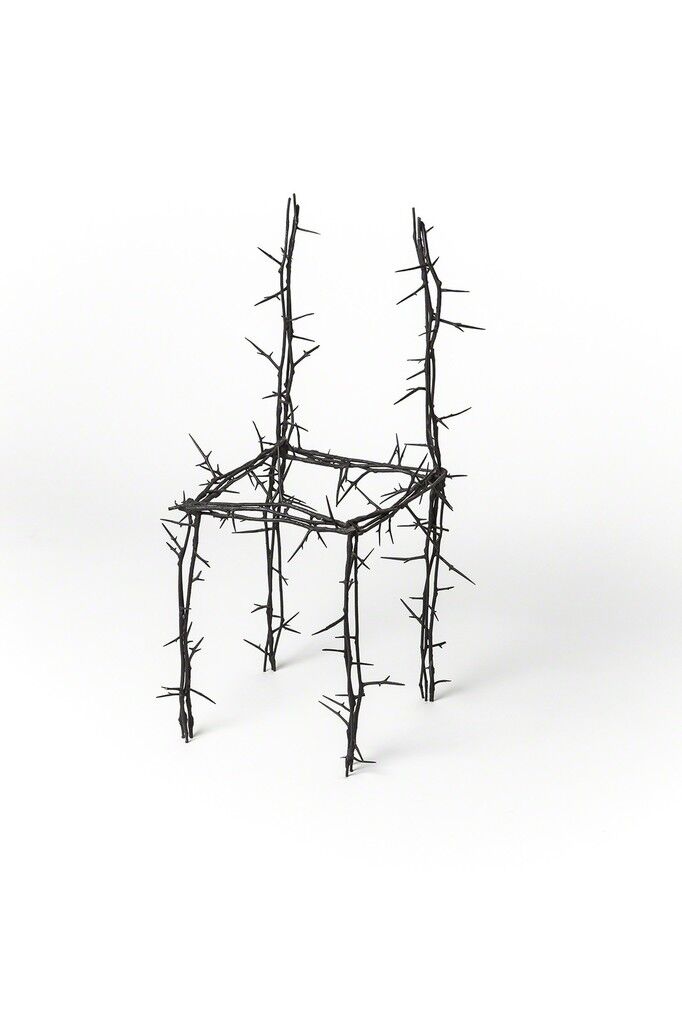 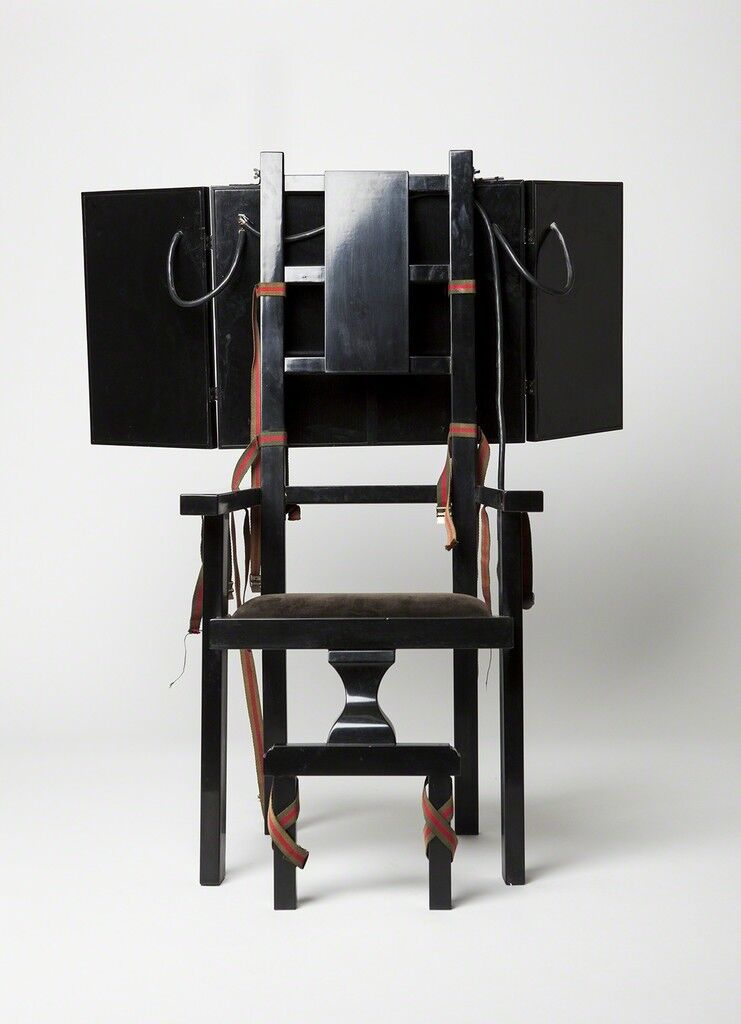 James Hong
Solar Electric Chair, 1979
Magen H Gallery
Advertisement
From the impossibility of
Michele Oka Doner
’s Terrible Chair (1990) to the obvious social critique within
James Hong
’s Solar Electric Chair (1979), there was never a sense of cohesiveness to the work shown at Art et Industrie, as there was with the Memphis Group for example. “One of the precepts of the gallery was to bring together a diverse group of people, so that the work wasn’t done in a style but rather with style,” noted Kaufmann. The sheer breadth of work echoes the energy that permeated the space, which almost from the beginning was functioning as a collaborative atmosphere where any conversations could take place. This fluid mindset started with Kaufmann himself. When advising his artists, Kaufmann wasn’t primarily concerned with their marketability, but rather with making sure that they had the tools to express their most important ideas. “If they had two or three things on the drawing board, where I could tell some of them would be easier to sell once they were realized whereas others seemed more difficult, I would move them in the direction of where they would naturally go if they weren’t even having concerns about selling the final piece,” he explained. 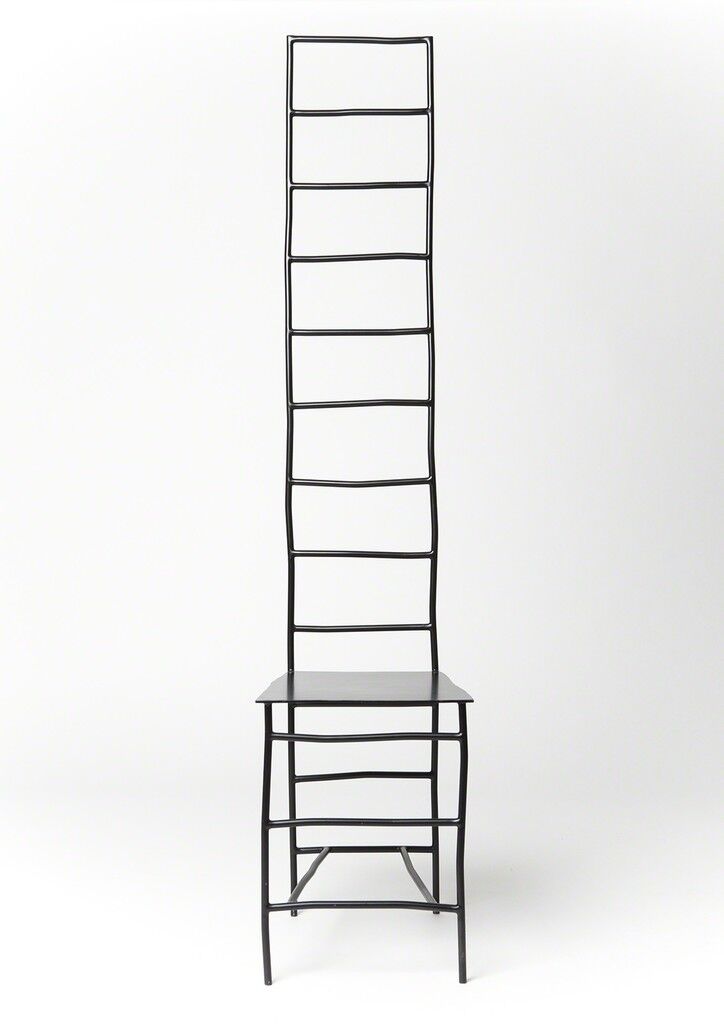 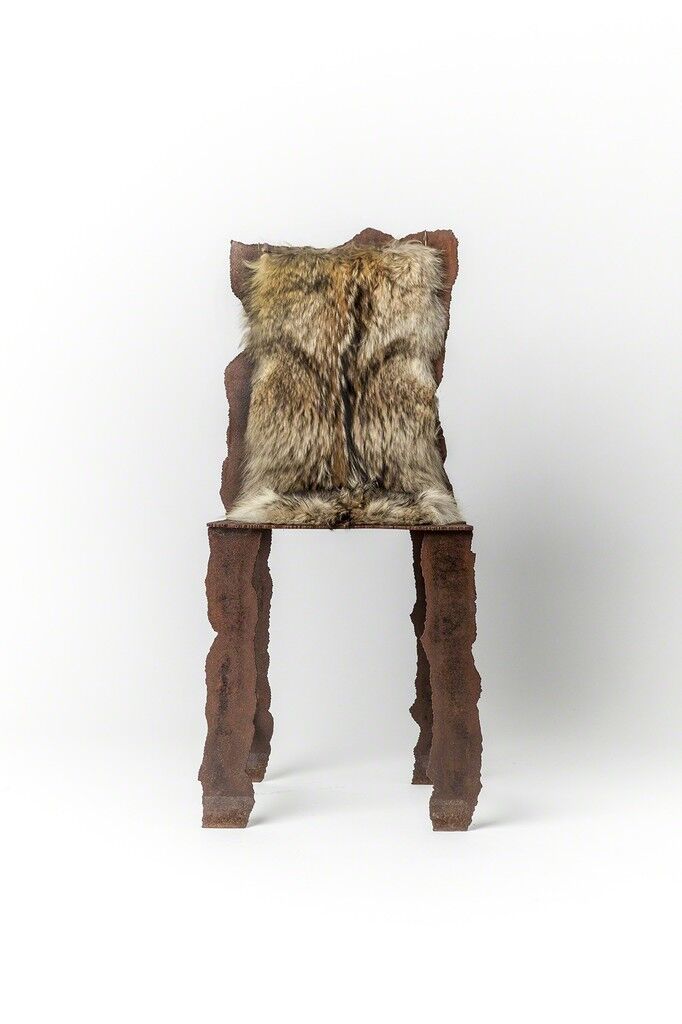 Howard Meister
Here Stand My Slayer, 1980
Magen H Gallery
It was an attitude that brought the work together, a will to transform the iconic, referential nature of furniture through the freedom of art, employing the bare bones of functional objects as a canvas to subvert expectations. In each case, the pieces speak through layers of meaning. Consider a more reticent piece,
Howard Meister
’s The Lesson (1982). “I’ve been living with this chair for a long time,” says Kaufmann. “For me, it refers to
Josef Hoffmann
and
Charles Rennie Mackintosh
—a certain type of chair that was done in 1900 and 1910 which was a lot more structural than what Howard did. Howard just loosened the bounds, slightly. There’s no real straight line in there and yet it’s all about math and straight lines. But it’s not meant to be loose either—it’s just like how a child would draw a straight line. And that’s the lesson.”