40 Male Nudes and a Tribute to Malick Sidibé Are the Highlights of This Year’s 1:54 London 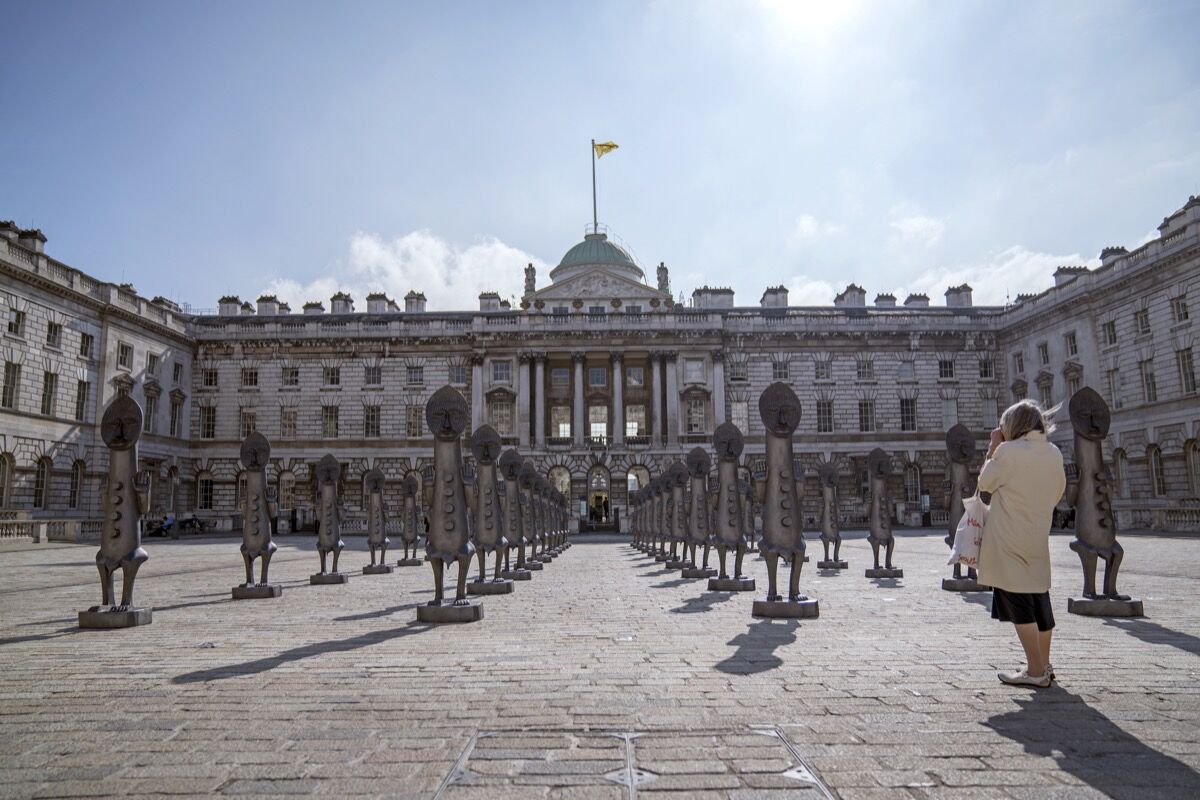 The fourth edition of the 1:54 Contemporary African Art Fair in London opened Wednesday morning at Somerset House, the neoclassical palace overlooking the River Thames. This year, 1:54 is showcasing 40 galleries from 18 countries, representing a diverse spread of the vast African continent and its diaspora in the Victorian east and west wings of the Tudor mansion.
In the courtyard, leading to the fair’s entrance, 40 nude black male figures make up Trinidadian-British artist Zak Ové’s sculptural installation Black and Blue: The Invisible Man and the Masque of Blackness (2016). “The piece is an amalgamation of African cultures, cast in graphite,” explained Ové, standing in between the figures. “I wanted to make pieces that herald the future as much as the past—in terms of what they present of our culture and how they reclaim this space here, which has been a place of establishment,” he continued. “I felt that that particular gesture encapsulated so much that is relevant right now—almost in the same context as Black Lives Matter. Here are 40 male nudes looking beautiful in their nakedness in the center of Britain’s establishment.”
Installed just in front of Somerset House’s water fountains, the figures evoke Ben Johnson’s 1605 Masque of Blackness—an amateur dramatic production enacted by Queen Anne and her ladies at court, which explored the relationship between skin color, beauty, and identity. Black and Blue also pays homage to the condition of black people as described by Ralph Ellison in his seminal novel Invisible Man; and as encompassed by the life of Michael Brown, the 18-year-old unarmed black male fatally shot by a police officer in 2014. The courtly figures hold their hands up as a sign of solidarity, in the same manner as the Black Lives Matter protestors in Ferguson, Missouri, when they marched through the streets, yelling, “Hands up, don’t shoot!” The work establishes the diasporic scope found mounted on the walls, above fireplaces, and on the floors within the palace.
The African diaspora is also represented in the offerings of the San Francisco- and New York-based Jenkins Johnson Gallery, which is showcasing several iconic works by Gordon Parks—American Gothic Washington, D.C. (1942), Muhammad Ali Boxing, Miami, Florida (1966), and Eldridge Cleaver and His Wife, Kathleen, Algiers, Algeria (1970)—that offer a glimpse into the lives of African Americans during the post-war and Civil Rights eras. The gallery has also mounted, near a window overlooking the Thames, Oakland-born artist Sadie Barnette’s Untitled (FBI, Racial Matters) (2016), featuring a page from the FBI file on her father, a former Black Panther. 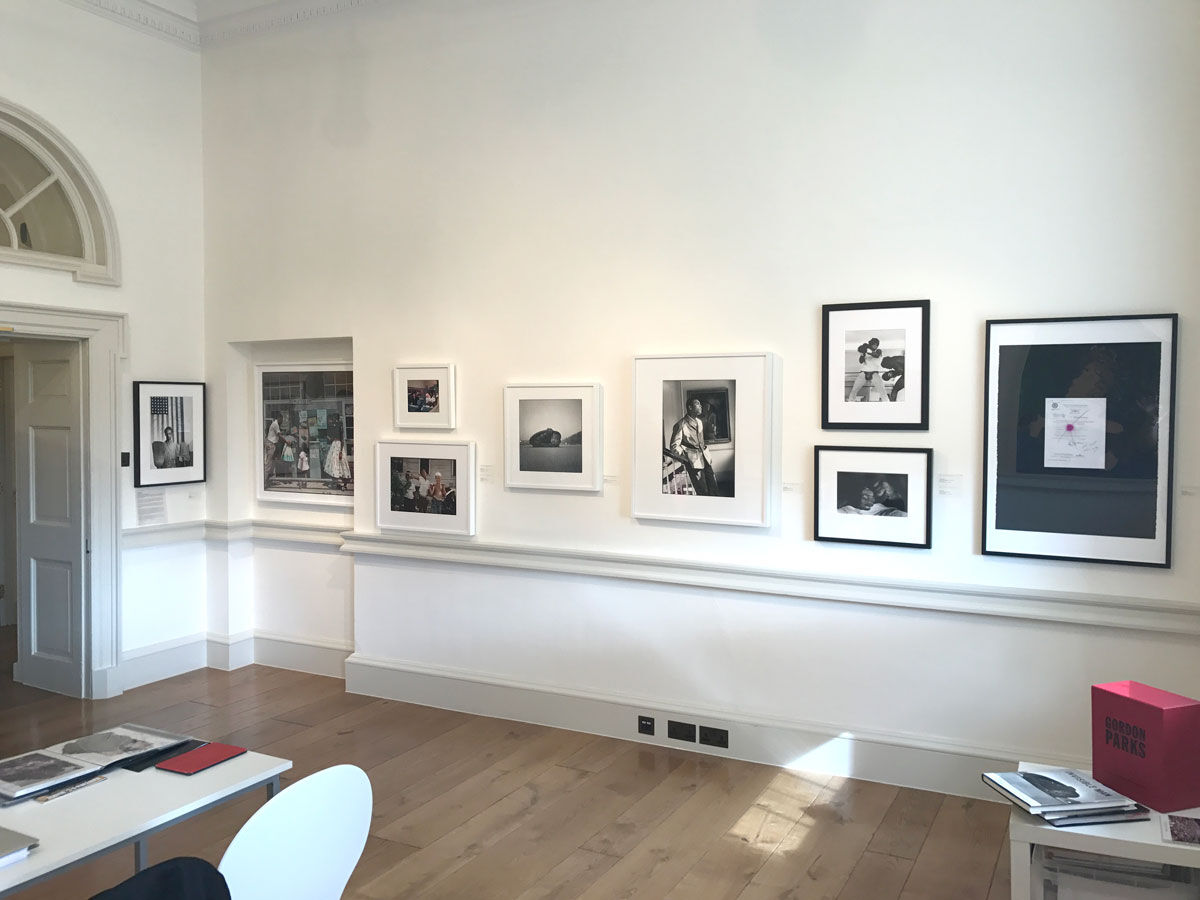 Elsewhere, the New York-based artist Derrick Adams has a pair of large-scale, mixed-media figurative works, exploring black leisure, on view with the Paris-based Galerie Anne de Villepoix. They are going for £24,000. Emerging Congolese artist JP Mika is showing colorful narrative scenes, including Le rajeunissement (2016), a painting of a stylish male figure posing before a naturalistic backdrop—which sold early Wednesday morning for €18,000. It evokes both the photorealism of
Barkley L. Hendricks
and the late Malian photographer
Malick Sidibé
’s prolific oeuvre. And one of the fair’s special projects, a collaboration with Gilles Peterson’s new global music-radio platform Worldwide FM, features interviews with artists such as Robi Walters.
The fair also includes 29-year-old Laura Windvogel’s playful, sexually charged ink, watercolor, and crayon paintings. Objectify thyself before others do (2016), for instance, shows a Hottentot Venus-like female figure taking a nude selfie. It’s a comment on the ways in which Western cultures sexualize women and, more specifically, the historic hyper-sexualization of the black body.
Several galleries feature assemblages by artists who use found objects to explore local histories. In October Gallery’s room, Romuald Hazoumè’s Tchigan (2015), made out of a plastic jug, hangs on a wall; while the Ghanaian artist Serge Attukwei Clottey’s Packed Community (2016) is one in a series of hanging plastic sculptures, made out of yellow gallon containers, that explore the everyday economic and environmental conditions of Africa.
In the east wing is Billie Zangewa’s Domestic Scene (2016), a silk tapestry of a woman washing her partner’s back in the shower, which sold for £35,000. The artist was recently featured in the group exhibitions “A Constellation” at the Studio Museum in Harlem and “Making Africa – A Continent of Contemporary Design” at the Vitra Design Museum. According to 1:54’s founding director, Touria El Glaoui, museum curators frequently discover new artists at the fair. “For a lot of curators, 1:54 is a one-stop shop,” she said. “They can’t afford to travel to Africa and the diaspora, so we bring them the work.”
The fair’s clear highlight, though, is not for sale. “Malick Sidibé: The Eye of Modern Mali,” presented by 1:54 in collaboration with MAGNIN-A and installed in the main hall, consists of 45 photographs that chronicle the nightlife and style of Bamako. The black-and-white gelatin silver prints honor the artist’s singular contributions to his medium, as well as to the visibility of African art. “No African artist has done more to enhance photography’s stature in the region, contribute to its history, enrich its image archive, or increase our awareness of the textures and transformations of African culture in the second half of the 20th century and the beginning of the 21st than Malick Sidibé,” reads the wall text.
At a fair where success will be determined by sales, it seems that its crowning achievement is its ability to gather together, every year, both historically important work by black artists and the latest contemporary offerings—giving a vivid snapshot of the concerns of black artists from all over the world.
Antwaun Sargent
Explore 1:54 Contemporary African Art Fair London on Artsy.
Videos of Antwaun Sargent in conversation with 1:54 founder Touria El Glaoui and artists Zak Ové and Robi Walters courtesy of 1:54 Contemporary African Art Fair.
Related Stories 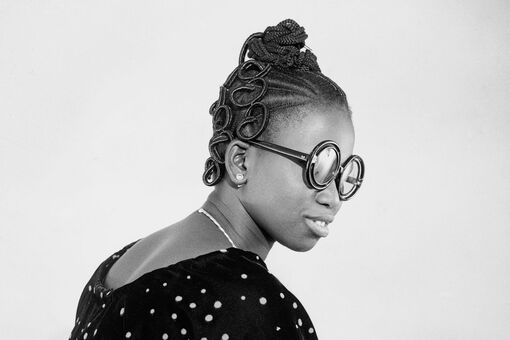