The bright yellow, plastic “kufuor” water containers that appear in Jeremiah Quarshie’s latest series of paintings aren’t an obvious inspiration for artmaking. Yet their mass-produced aesthetic and domestic functionality have led them to become a motif in the recent work of prominent Ghanaian artists. The ubiquitous vessels, used all over Ghana, also feature in
Serge Attukwei Clottey
’s socio-political “Afrogallonism” project. In Quarshie’s paintings, on view later this month in “Yellow is the Colour of Water” at Gallery 1957 in Accra’s Kempinski Hotel Gold Coast City, the jerry cans surround his (mostly female) subjects, reimagined to resemble thrones.
Quarshie is preoccupied with global capitalism and its impact and intersection with local traditions and daily rituals—evident in his previous portraits of market ladies or village women using smartphones, and equally in his paintings of famous figures from Black Atlantic history, including Nelson Mandela, Oprah Winfrey, and footballer Michael Essien.
Quarshie first met Clottey in 2011, while they were preparing for a group exhibition of artists from Accra—including Bernard Akoi-Jackson,
Dorothy Akpene Amenuke
, who also graduated from the Department of Painting and Sculpture at the renowned Kwame Nkrumah University of Science and Technology (KNUST) in Kumasi, central Ghana. The school is one of the most prestigious in West Africa—
El Anatsui
and
Ibrahim Mahama
are among their star alumni. 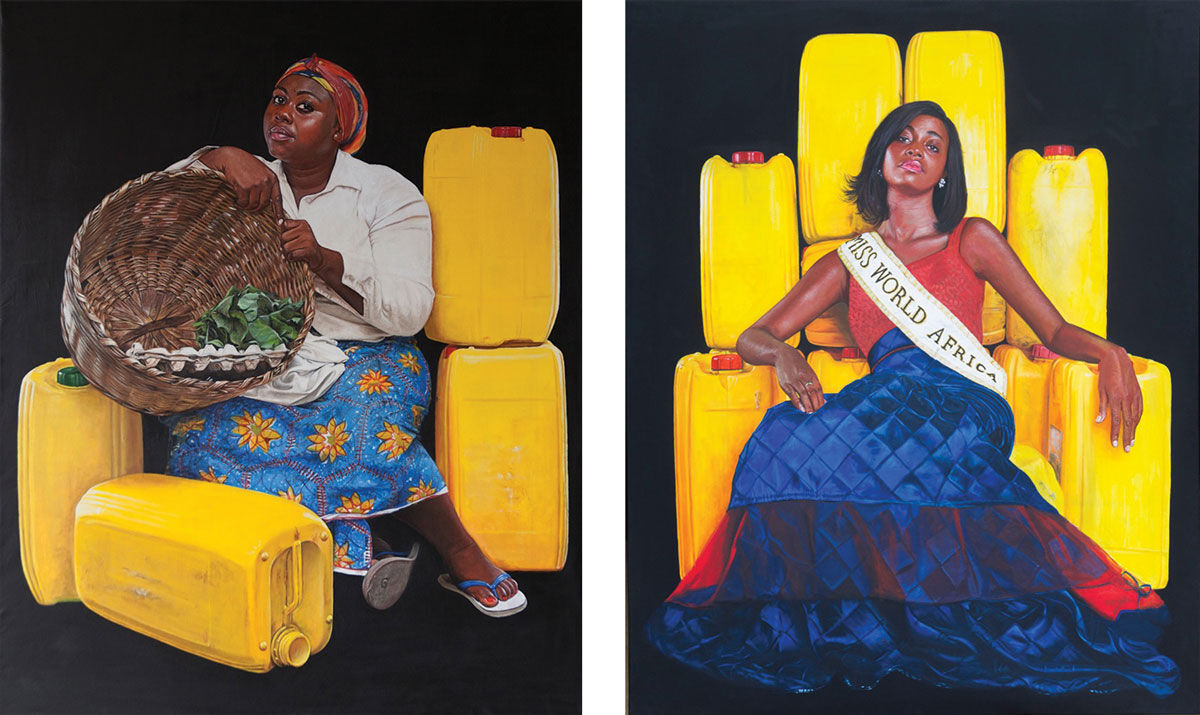 Jeremiah Quarshie, Yellow is the Colour of Water series, 2015-2016. Images courtesy of the artist and Gallery 1957, Accra.

“Like Serge, I have always been interested in social conditions,” Quarshie explains via e-mail, as he prepares for the new show in Accra. The two became friends, though their approach to this common object is very different. Quarshie depicts stacks of whole jerry cans in his paintings, whereas Clottey cuts them up into pieces to create sculptural tapestries. The containers were attractive to Quarshie not to promote environmental issues, but as a way to question the ever-present objects of contemporary society.
“When I started looking at the object of the gallons, I saw all these contradictions: in their shared and shifting ownerships, their network of class relations, their repurposing,” Quarshie offers. “The gallons entered into the system first as oil canisters, and were later appropriated for storing and conveying water;” he notes that the containers replaced older systems for transporting water, including pig feet barrels and buckets. “You have people from all walks of life, geographies, and positions who are implicated in the subject at one time. Even those who may not directly use it might see what it stood for to the everyday person.”
The subjects of the paintings (a continuation of his first Yellow is the Colour of Water portrait, realized in 2013) were carefully selected to represent a genuine cross-section of Ghanaian society—a way to further explore the intertwining of different aspects of culture and life. “One of the people who posed was my grandmother. She is in her mid-90s and currently lives with us. I found it very interesting because she has lived through all these different eras in our history as a country,” Quarshie explains. “She has lived in colonial times, during times of independence, after independence, through the coup d’états, and through a democratic system. She’s also lived in different regions of the country. She carries so much history as a person. So I found it very important for her to sit for me.” 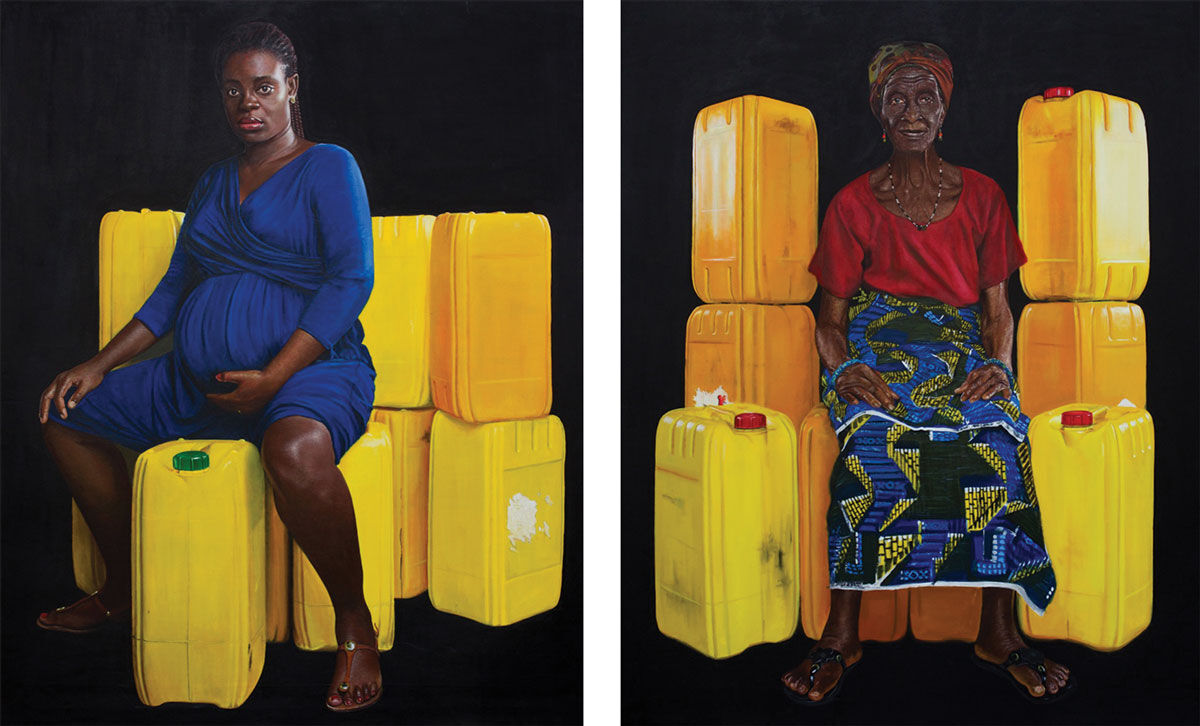 Jeremiah Quarshie, Yellow is the Colour of Water series, 2015-2016. Images courtesy of the artist and Gallery 1957, Accra.

Advertisement
Other portraits include a female fishmonger from Labadi and Quarshie’s friend Caroline, while she was pregnant. “Our parents lived in the same vicinity when we were young, and then when we grew older she got married to someone I’m very close to,” he says of Caroline. “And then she was pregnant, and I was looking for a pregnant woman to draw, so I was like, ‘Whew, this is what I need.’ I also happen to have a very strong connection to the baby. I don’t know if that’s because I painted him while he was in the womb.”
Quarshie’s interest in vessels (animate and inanimate) extends to several public works that are part of the exhibition, and represent new terrain for the artist. At Tema Station Lorry Park and Kotoka International Airport—critical locations for the movement of people and objects in and out of the capital city—Quarshie has intervened with sculptures made of repurposed pipes and hoses as well as billboards. These works open up wider questions of the exchange that takes place between Ghana and the outside world in the neoliberal age.
“I really became interested in Jeremiah’s exhibition when he told me last year about his idea to ‘map’ the city through a network of targeted interventions,” says the show’s curator Robin Riskin, who is completing an MFA in Curating at KNUST. “I made it a point of priority to develop these aspects of the work, as well as how Jeremiah was approaching painting through other forms of objecthood (such as the casted pipes and billboard formats).”

Quarshie’s involvement in public art goes back to the experience of painting a mural at Ghana’s lively Chale Wote street art festival in 2013. “It was marvelous. It’s very interesting to find public response to your work, and not just from a few who walk into a gallery,” he says. “People actually see your work on the street and get to fall in love with it, talk about it, take images beside it, and show it on social media. For me, that was a very interesting mode of presentation.”
That experience motivated him to produce work outside. But it also aligns with KNUST’s “Emancipatory Art Teaching” methods—to encourage a generation of emerging artists to think about space and their interactions with the city through their art, as well as being a pragmatic answer to a lack of infrastructure for presenting art within conventional contexts in Ghana. The program’s end-of-year exhibitions have taken place in abandoned buildings, tro-tro cars, hairdressing salons, garages, hotels, shops, and markets.
“Right now, the scene is charged,” Quarshie says. In the past, Ghanaian artists—including Anatsui—have relocated to Nigeria where the market is more developed, leaving a hole in their homeland. “Everything had been taking place sort of underground, artists were having conversations, meeting each other—even in non-artistic spaces—having conversations about art and the possibilities.” Now, as possibilites become realities in Ghana, Quarshie and his peers are staying put.
—Charlotte Jansen
Related Stories 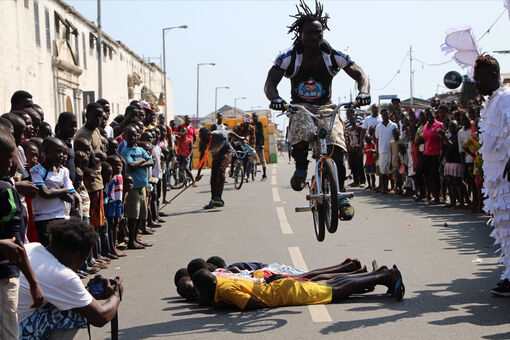