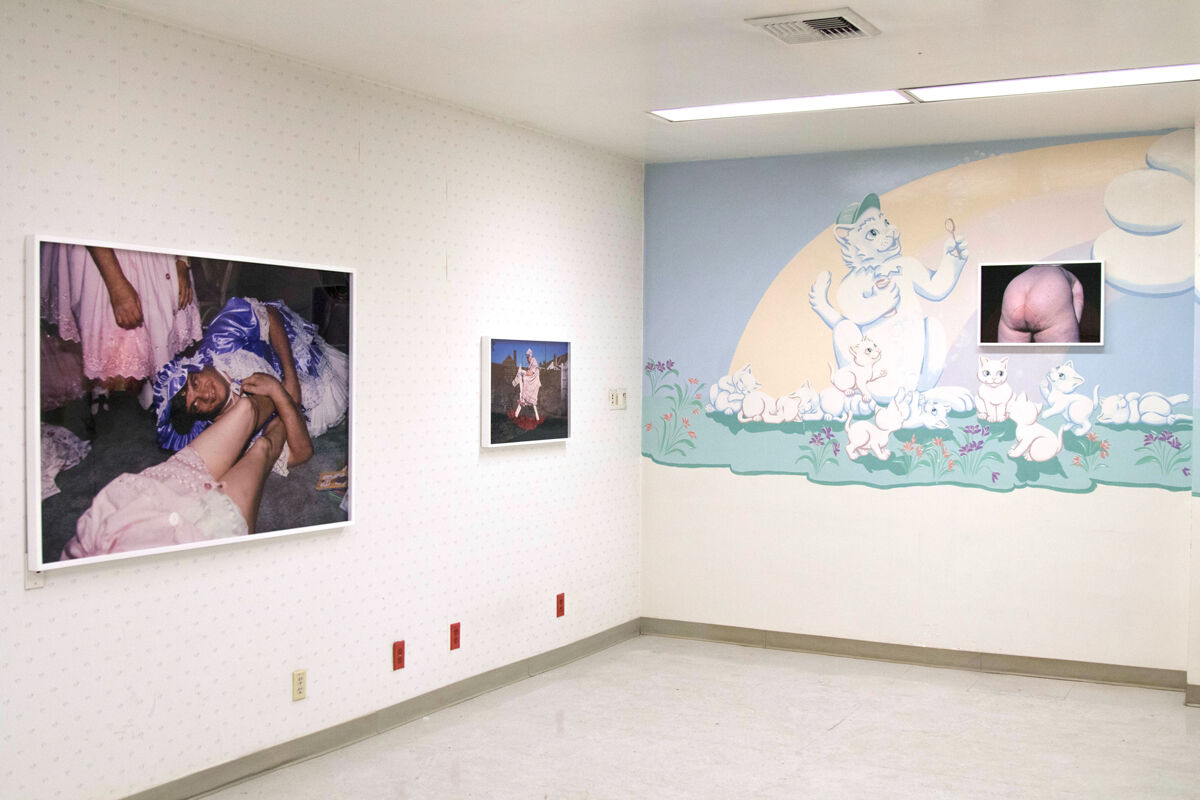 This fall, Australian photographer
Polly Borland
unexpectedly discovered a very fitting place to show her series “The Babies” (2001)—a collection of photographs of men who have a fetish for dressing up as infants. As part of the exhibition “Human Condition,” which runs through November 30th in an abandoned hospital in Los Angeles, Borland’s jarring photos of adult men wearing diapers are on display in a cheerful former pediatric ward, hanging beside leftover pastel murals of frolicking kittens, bunnies, and puppies.
The pairing is just one example of how artists and curators in the past few years have found inspiration in abandoned hospitals—and the results aren’t nearly as morbid as you’d expect. Hospitals are microcosms of human activity, so naturally, these art exhibitions address a wide range of topics, such as birth, death, prayer, or even just eating in a cafeteria. The histories of the buildings themselves have often served as useful jumping-off points.
Art exhibitions in abandoned or “alternative” spaces have been a trend for decades. A prime example is Alanna Heiss’s founding of P.S.1 Contemporary Art Center, now MoMA PS1, in an abandoned school in Queens in 1976. And many currently operating hospitals have recognized the healing power of the arts, and have actively engaged artists through commissions, exhibitions, and art therapy programs. San Francisco General Hospital and Trauma Center, for example, has a collection of public sculpture, video, murals, mosaics, stained glass, and framed art spread across its campus; London hospital Guy’s announced a series of site-specific commissions for its cancer wing last year. Not to mention WPA’s Federal Art Project in the U.S. that dispatched artists to hospitals (among other venues like post offices) to create murals in the late 1930s and early ’40s (the WPA murals at Harlem Hospital Center were in the spotlight in 2012 after a major restoration project). But the idea to use abandoned hospitals as exhibition venues seems to have seen something of an uptick in recent years. 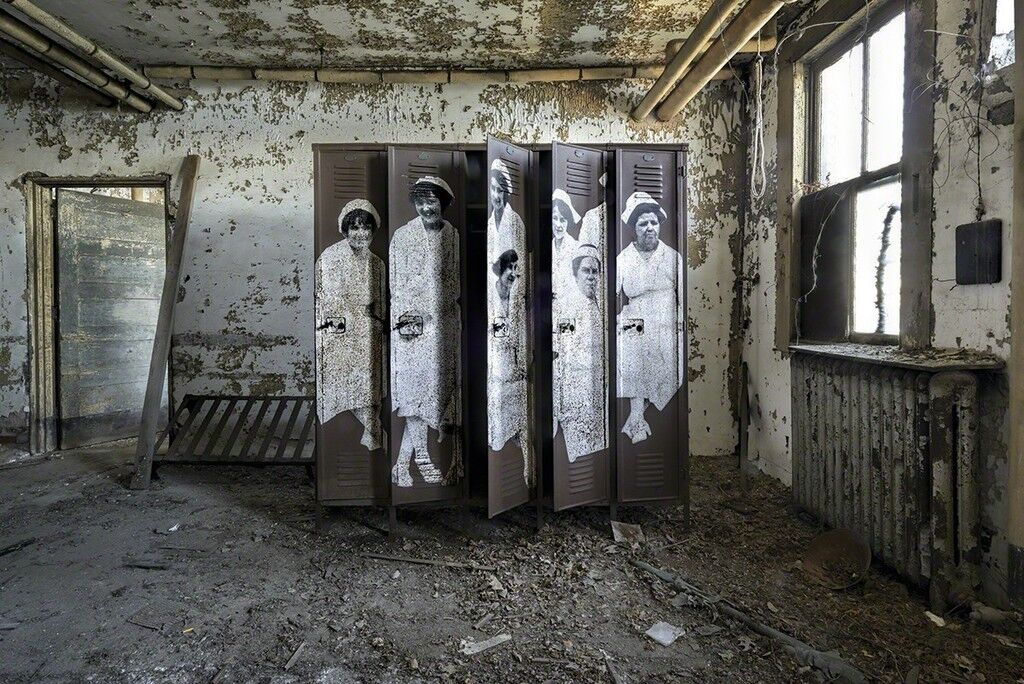 JR
Unframed, Nurses at Ellis Island Hospital revu par JR, U.S.A., 2014, 2014
Lazarides
Among high-profile examples is
JR
’s eerie 2014 installation on the walls of the abandoned Ellis Island immigrant hospital, featuring large-scale reproductions of photographs from the Ellis Island archives. (It remains on view.) And in 2015, German artist Bettina WitteVeen showed work on the subject of war and genocide at Brooklyn Navy Yard’s abandoned hospital building, a fitting site given that soldiers were once treated there.
“With abandoned hospitals, there’s so much connotation, whether it’s the birth of a baby, a trauma, or the loss of a loved one,” observes art advisor John Wolf, who curated “Human Condition,” a show of 80 artists that spans 40,000 square feet of the former Los Angeles Metropolitan Medical Center in West Adams. Wolf knew the developer who own the site, but financed the show independently. “Audiences come in with these subconscious feelings, and the work really resonates,” Wolf continues, “It’s physical and metaphysical. The environment and the art bring up questions about existence—What’s my purpose in life? What am I going to leave behind?”
The Los Angeles Metropolitan Medical Center closed in 2013 amid revelations of insurance fraud and criminal mismanagement. According to court documents, the hospital recruited homeless people from nearby Skid Row to fill beds in the fourth floor psychiatric ward and illegally billed Medicaid and Medi-Cal for unnecessary tests and procedures. Given this history, the fourth floor seemed like the right place for
Max Hooper Schneider
’s sculpture Shoe of Deceased Adult Male (Right Foot) (2015), in which a shoe floats above a steel plinth with the help of a magnetic levitation system. The shoe, which is made of found materials, belonged to a homeless man who had died; Schneider used to encounter the man daily on his jogging route.
On a lighter note, Wolf curated a sumptuous waiting room within the otherwise sterile Intensive Care Unit, with furniture by
Jeff Zimmerman
, the
Haas Brothers
, James Magni, Holly Hunt, and Kerry Joyce.
Bradley Wood
paintings of socialite parties in Westchester County hang on the walls. “I loved the juxtaposition of feeling like you’re in a world of decadent parties in grandiose interiors, with no cares, but then you look over, and you’re actually in an intensive care unit,” Wolf says.

Advertisement
The 2014 exhibition “Feito Por Brasileiros/Made By Brazilians,” which featured 100 artists at São Paulo’s Matarazzo Hospital, a 19th-century Italianate landmark, where more than half a million babies were once born. The sprawling building, part of a compound on six acres of land, was re-energized by the exhibition, which opened during the Bienal de São Paulo and was financed by the developers responsible for transforming the site into a mixed-use complex complete with galleries, commercial businesses, and a boutique hotel.
“I’ve curated over 200 exhibitions over 35 years in the art world, and I’ve used all sorts of alternative spaces, but this project was absolutely unique,” says São Paulo- and New York-based curator and art advisor Simon Watson, who organized the U.S. artists for “Feito Por Brasileiros.” “You felt the history and memory of the place—the wounded getting mended, people dying, mothers giving birth. It was profoundly moving. The artists took an empty haunted house and made it into a wonder palace.”
Some of the works included had to do with decay, like
Arthur Lescher
’s piece in which water streamed down from the ceiling, recreating the condition that the room was found in. Though there were other associations as well. “When you’re in a hospital and you see dripping, you think of IV drips,” Watson offers. Also on display was a life-sized, luminous photograph by
Jack Pierson
of a young man holding his hand in front of his genitals—a gesture that recalls Botticelli’s The Birth of Venus—suggesting the anxiety and vulnerability of being a patient in a hospital. In contrast, artist
Alexander Lee
took inspiration from native Brazilian breadfruit trees on the property to create an interactive installation where schoolchildren could use the fruits to make prints while  learning about the history of slavery in Brazil.
Abandoned mental hospitals seem to hold particular fascination for artists. A few years ago, Brazilian artist
Herbert Baglione
painted sinuous silhouettes of spirits on the walls of a derelict mental institution in Italy. The photographer
Christopher Payne
has traveled around the U.S. documenting shuttered mental institutions—remarkably grand structures leftover from another era.

Some artists even claim to have encountered ghosts, whom they sought to honor through their work. The exhibition “The Future Past” took place earlier this year in Indianapolis’s Carpentry Hall, part of the former Central State Hospital, which operated as a mental hospital from the 1800s until the early 1990s. When artist Colin Tuis Nesbit explored the attic, he was filled with “an immediate and intense unease,” he says, as if someone was in the space with him. He used the rituals of hoodoo—African-American folk magic—to conjure a sympathetic ghost to serve as an ambassador between the living and the dead. He used blessed salt to draw the outline of a bedroom, creating a spiritual barrier, and then he sat in a chair and read aloud to the ghosts from the Gaston Bachelard’s book The Poetics of Space. “Central State belongs to its past patients,” Nesbit says. “I hoped to make a piece specifically for them, that didn’t exploit their life experience for visitors.”
Audiences have been deeply affected by such exhibitions. In São Paulo, Watson recalls, there were hundreds of thousands of visitors: “They wanted to see how artists interpreted this hallowed place, and some of them were weeping.”
“Human Condition” has also seen strong attendance, as well as representation on social media and press outlets. “We are surrounded by technology and products that make us feel good, but it’s through feeling pain that we can evolve, grow and change,” Wolf offers. “What better place to feel pain than in a building that housed a lot of pain?”
—Liz Logan
Related Stories 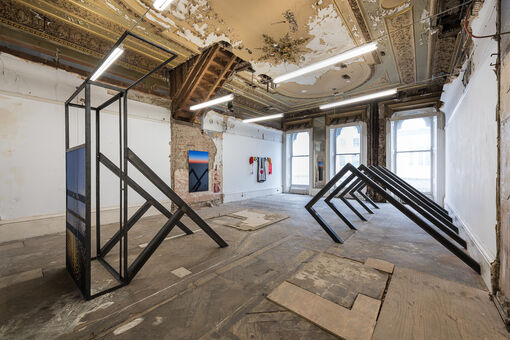