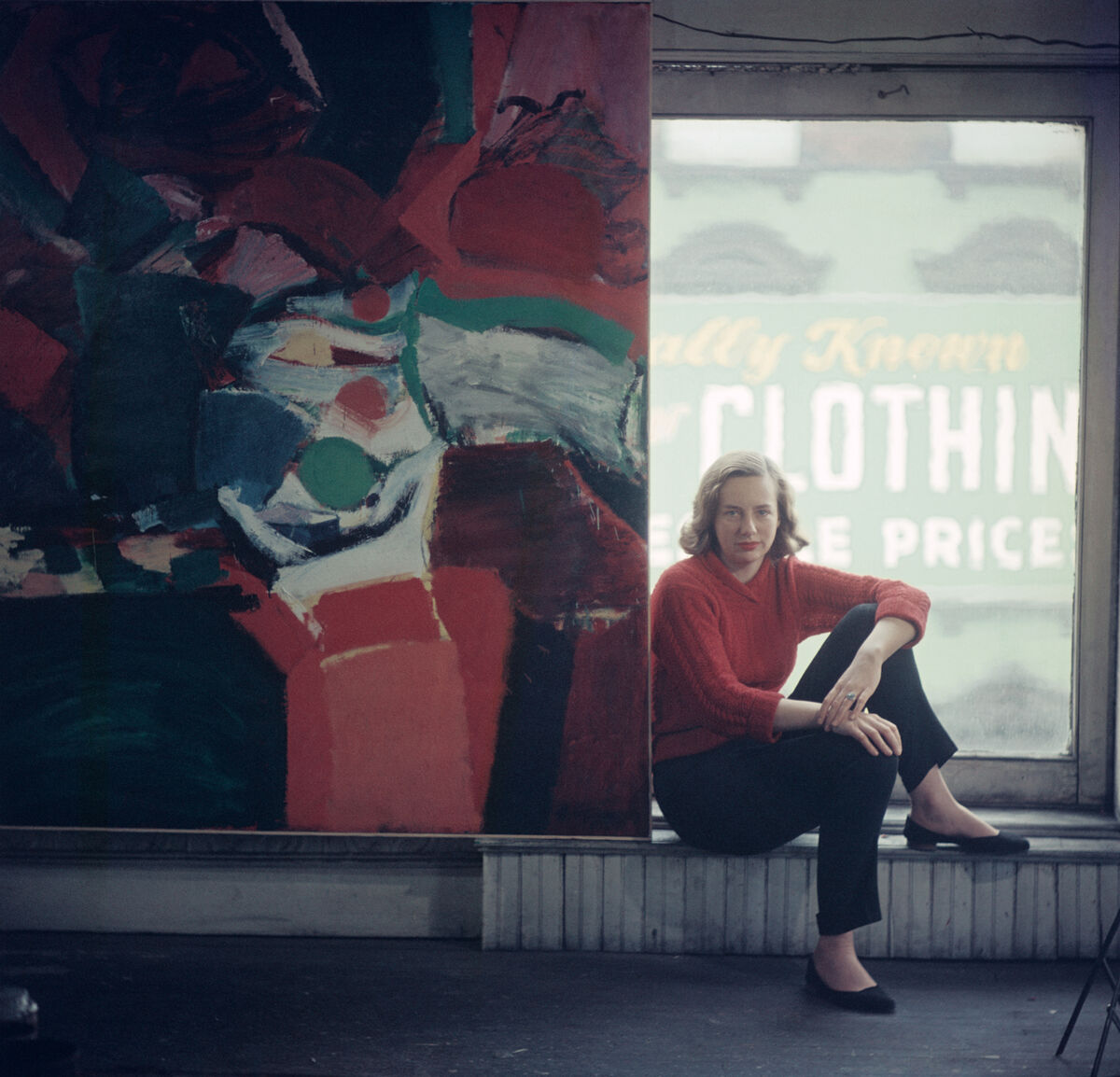 In socioeconomic terms, the
Abstract Expressionist
movement in New York can be divided into two eras: the first featuring obscurity and poverty, and the second, fortune and fame. But there was very little by way of a transitional bridge between those two periods, which made the arrival of a flood of cash and notoriety in the mid-1950s oddly destabilizing for the artists working in New York. As their colleague, the writer Harold Rosenberg, said, “They lost their minds.…It was the money. Just like schmucks in Hollywood. This hit them much too strong and much too organized.”
Although Rosenberg was talking about Abstract Expressionism men, quite remarkably, the art-market gold rush he described hit some female artists just as hard, and just as quickly.
By 1954,
Grace Hartigan
, for example, had accomplished a most improbable rise to art-world stardom. At the age of 32, and after painting professionally for a mere five years, her work hung in the Museum of Modern Art and the Whitney Museum of American Art. She was fêted in both the art press and in mass-media publications from Newsweek to Glamour. She had had several solo gallery shows while some men, many years her senior, had had none. And she had earned serious money by the standards of those times: In 1954, she sold $5,500 worth of work (or $52,000 in today’s money), just short of the $7,000 veteran
Willem de Kooning
made the same year. Hartigan occupied uncharted territory for a female artist: She was at the top. 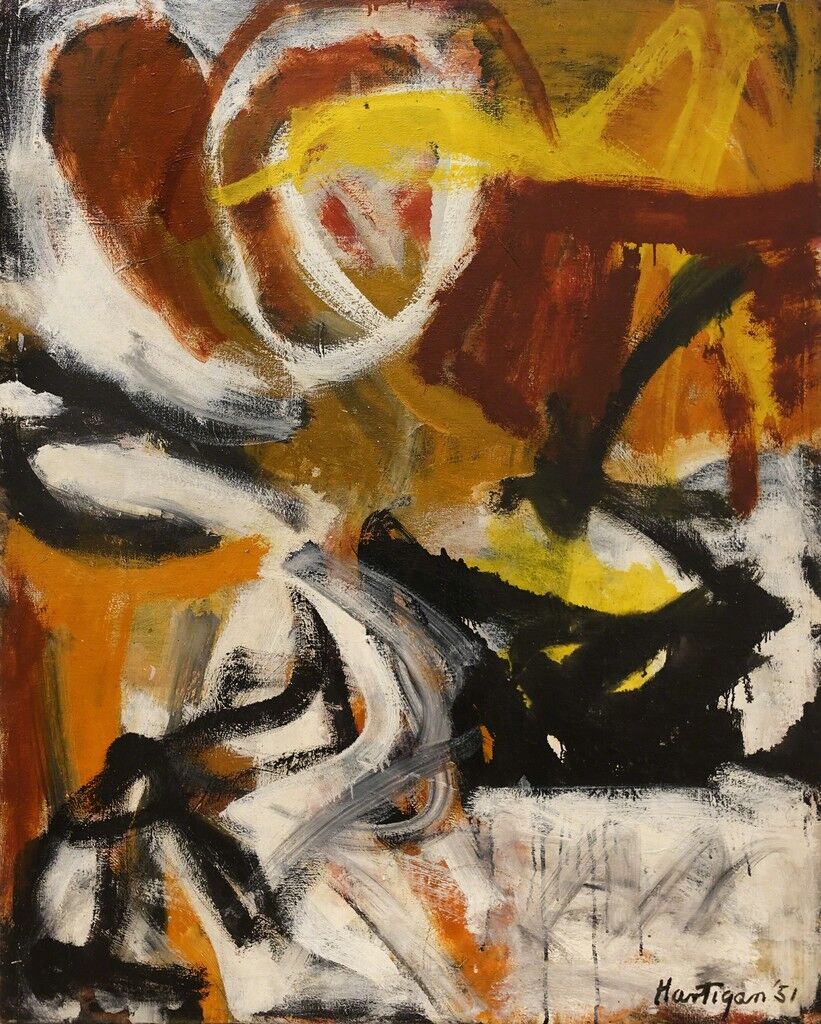 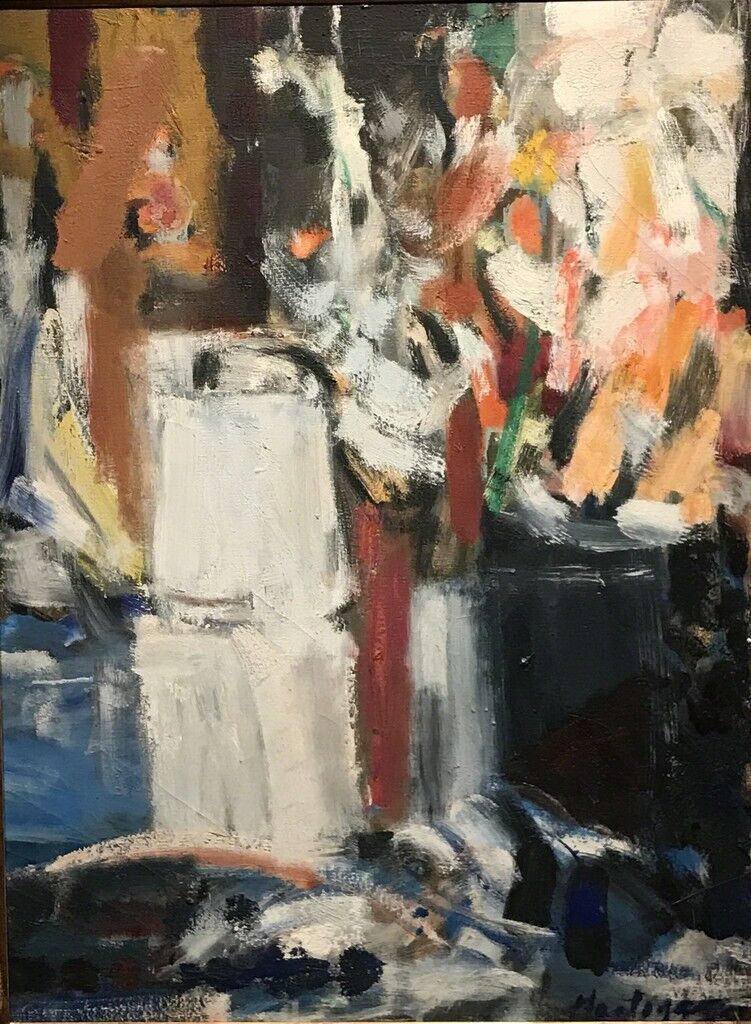 Grace Hartigan
Coffee Pot and Gladiolas, 1954
ACA Galleries
What had made Hartigan so irresistible was not merely her art, but her person. She was a previously unheard-of species: A strong, self-made, successful American woman and artist, one who smoked, wore paint-splattered jeans, and spoke with a New Jersey accent. She wasn’t exceptional or a kook, as women who painted or sculpted had been characterized through the ages. Readers and gallery-goers recognized themselves in her, and that made the cutting-edge art she produced seem both more accessible and more daring. Ever attuned to the latest fashion, the market lapped it up.
Hartigan, followed by her peers
Joan Mitchell
and
Helen Frankenthaler
, was discovered just as the often-impulsive and fickle art market—the market that we have inherited—was born.
Prior to the mid-1950s, the number of galleries in the United States were relatively few, and the collectors who frequented them were a breed whose taste tended toward European artists. Among the events that altered that landscape was a change in U.S. tax law that made it advantageous for connoisseurs to buy art with the intention of donating it to a museum; a new group of collectors not only wanted to own works by living artists, but hankered to become part of the artists’ exciting lives; and a recognition that the art being created in the United States was not just great, it was revolutionary. Money rushed in, and along with it, confusion on the part of the artists.
Most frequently, the off-canvas struggle described in the story of women painters is the battle for equality and opportunity, recognition and respect. But while Hartigan and her generation confronted those issues, as has every successive generation, they were the first to overcome them and face an altogether different crisis: success. 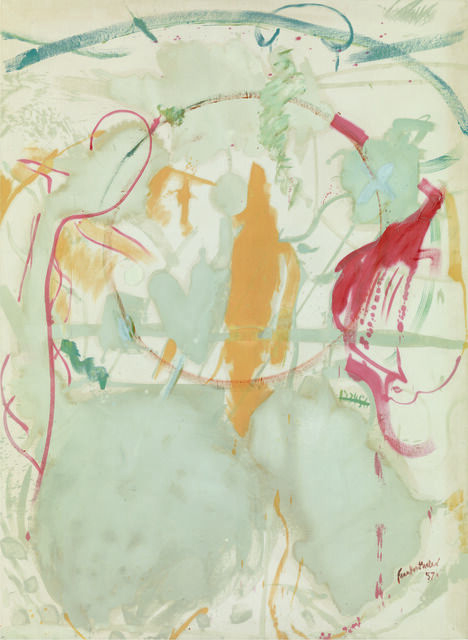 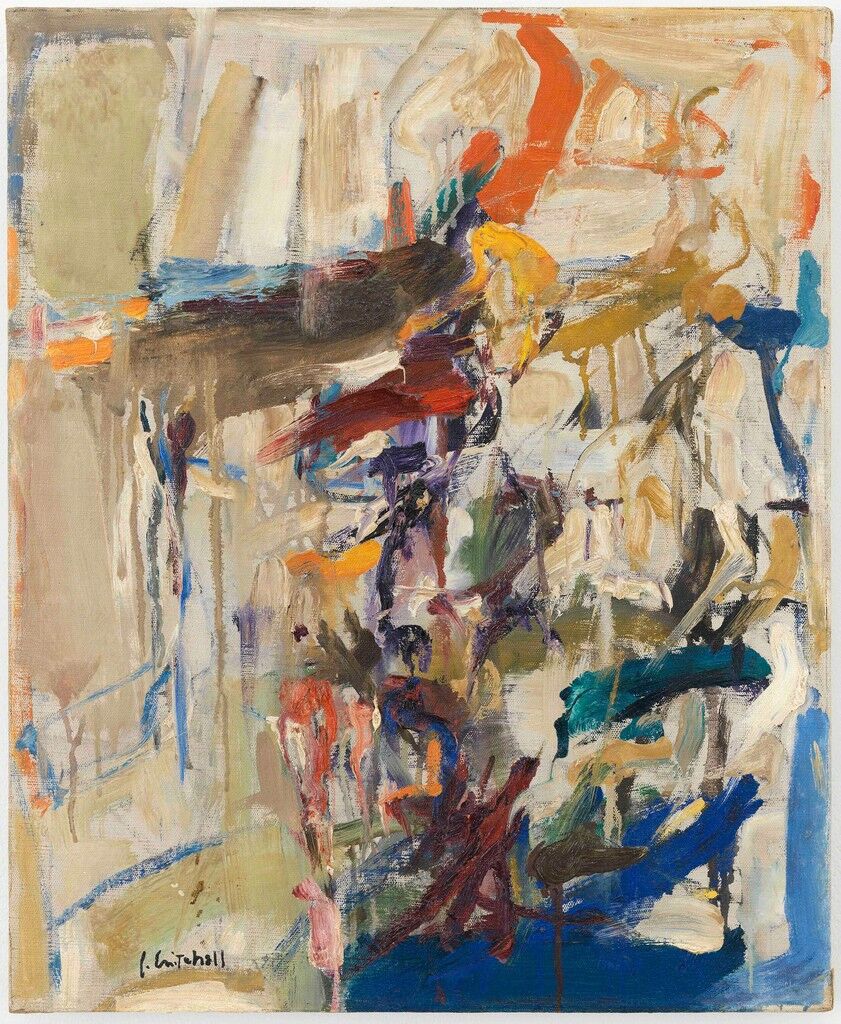 Joan Mitchell
Untitled, ca. 1953
Hollis Taggart
Advertisement
For Hartigan, the change was dizzying. In 1952, she was so poor she had sifted through trash cans in search of discarded canvas, and she and poet Frank O’Hara combined cans of pea soup and chicken soup to create the illusion of fine dining. Beginning a mere two years later, she found herself being photographed by
Cecil Beaton
, addressing a gathering at Vassar College, selling out shows at Tibor de Nagy, exhibiting in MoMA’s most important international show, and wearing a fur coat with her signature, Hartigan, stitched into silk lining. As Rosenberg said, it was too much, too soon. Hartigan herself confided in her diary: “I don’t know which is more frightening, failure or success.”
She was not alone in her confusion.
Joan Mitchell
abhorred the changed atmosphere that equated the value of art with the price attached to it; she fled to Paris.
Helen Frankenthaler
sought shelter where she had started—on the Upper East Side. And the twice-married Hartigan married twice more in search of stability.
While the methods to achieve it were different, the goal of these women was the same: to survive as artists amid a fluctuating market that heralded them and their work one day before banishing them the next. It was the act of creation, not the accolades they received, that was of utmost importance to these three. 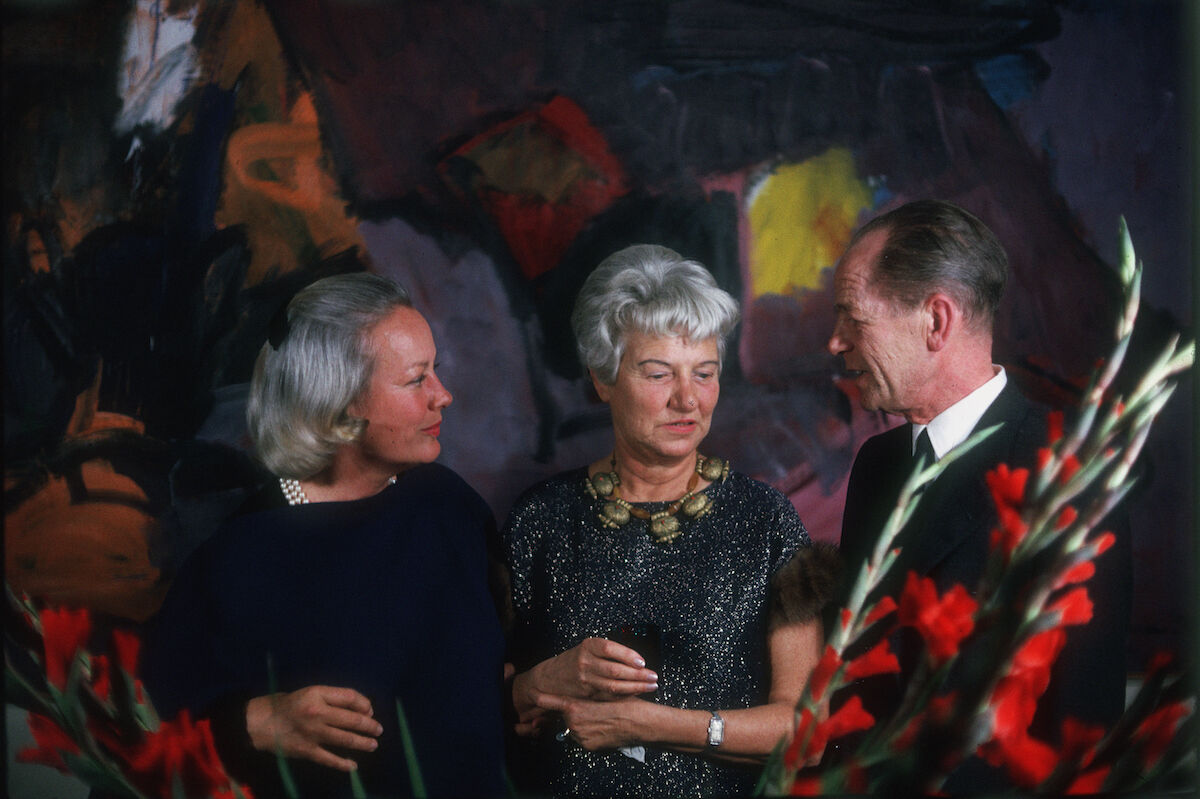 Theirs is a cautionary tale for female artists today because of the word I mentioned earlier: fashion. With the art market rebounding, collectors have begun spending significant amounts of money on art by women. The auctions last spring that resulted in record sales for works by 15 women appear not to have been anomalies. With the fall season upon us, Propped (1992) by artist
Jenny Saville
set a record at Sotheby’s in London, selling for £9.5 million ($12.4 million), including fees—the most ever paid for a work by a living woman artist. That same evening at Phillips, the highest price paid for a painting was £3.1 million ($4.1 million) with fees for Mitchell’s Perch and Twirl (1973).
Is this trend the result of fashion? Are works by women a mere fad in yet another art market gold rush? Or is the attention the result of genuine appreciation? If it is the latter, there is truly reason to celebrate after centuries in which women in the art world were barely visible except as (often nude) figures languishing on canvas. If it is a case of fashion, however, then much work must be done by artists, galleries, critics, museums, art historians, and art appreciators to ensure that what is in vogue today is not callously abandoned tomorrow.
The difference between genuine art appreciation and the allure of fashion is as great as the chasm that distinguished the life of the Abstract Expressionists before and after the art world became an art business. It is the difference between culture and commerce.
Mary Gabriel
Related Stories