Abigail Cain
Mar 20, 2017 5:46pm
You can no longer visit China’s Xianyang Palace, a tour guide informs artist
Abigail Reynolds
as she arrives in Xi’an. It ceased to exist some 2,400 years ago, he says, suggesting instead that she visit the city’s famed Terracotta Army. But she insists. For the British artist, the palace’s absence is precisely the point.
Reynolds arrived in China last September in search of lost libraries, institutions of learning along the ancient Silk Road that have been variously destroyed or abandoned over the centuries. The Xianyang Palace was her second stop, preceded by the Baisikou pagodas in Yinchuan. It was also the oldest site on her list. Constructed by the First Emperor Qin Shi Huang, it was destroyed in 206 B.C., following his death. Rumors hold that the palace library was burned to the ground, and those who frequented it were buried alive. 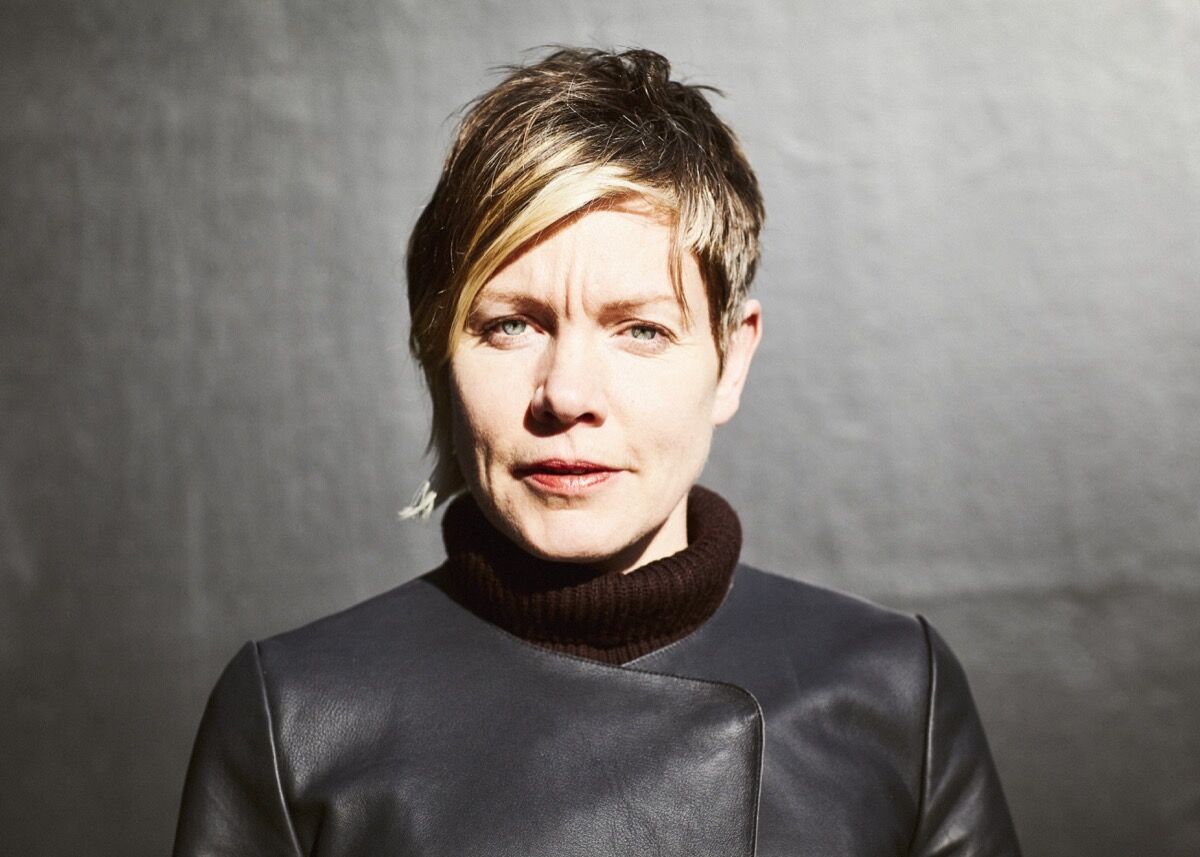 Portrait of Abigail Reynolds in London by Elliot Kennedy for Artsy.

Advertisement
Reynolds’s wide-ranging journey—to libraries scattered across China, Uzbekistan, Iran, Turkey, Italy, and Egypt—signals a departure for the artist, whose previous works have been deeply rooted in the history of London and Cornwall. But as the third winner of the BMW Art Journey, which offers emerging artists the chance to develop their practice through an all-expenses-paid trip of their choosing, Reynolds felt compelled to widen her scope.
“It just seemed to me a once-in-a-lifetime opportunity to think on this huge, macro scale,” she said over the phone from Cornwall this January, a few weeks after completing the third and final leg of her five-month-long trek. Reynolds said that rather than continuing to focus her practice so tightly on the culture that she grew out of, she decided “to just go to the absolute opposite end of the spectrum and cross huge amounts of the globe.” 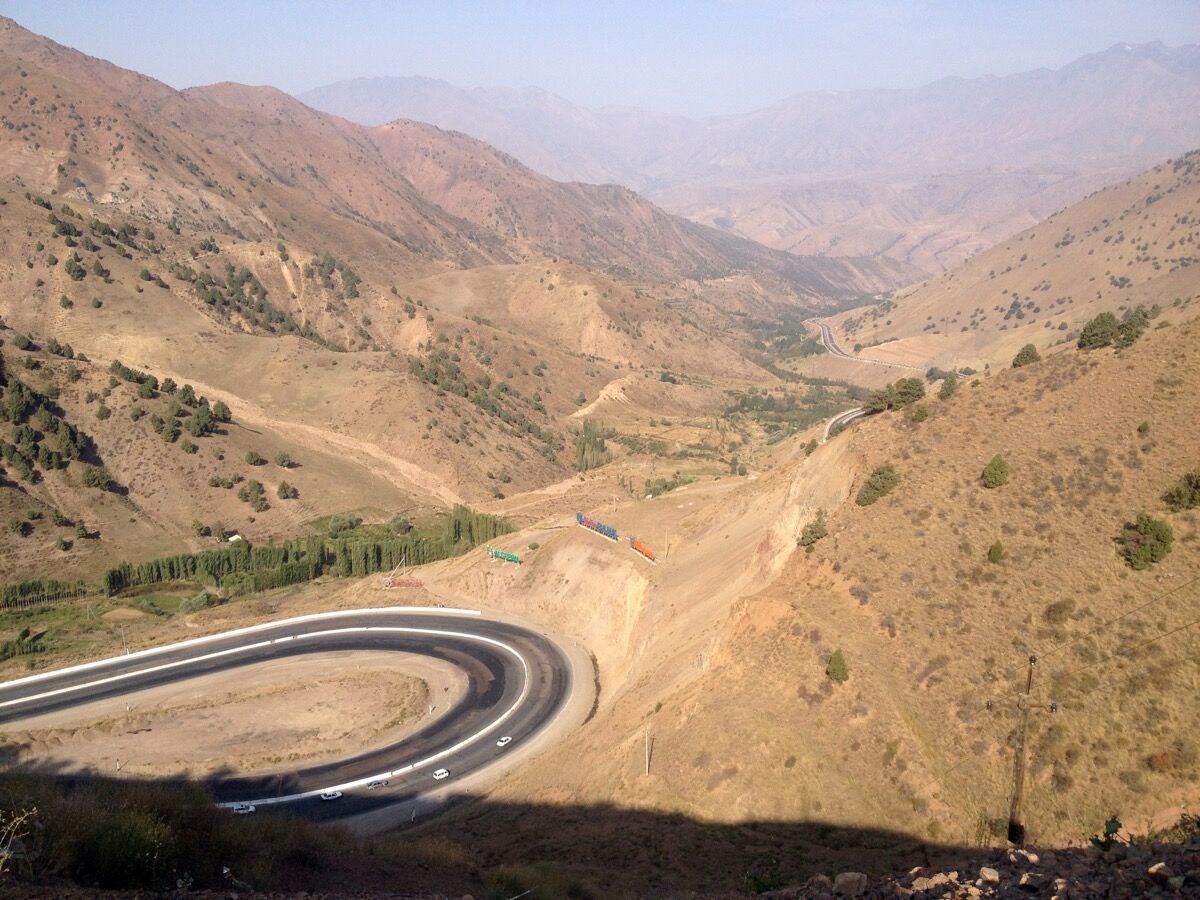 The BMW Art Journey program was launched in 2015, as part of the German automaker’s sponsorship of Art Basel. Two artists are awarded the prize each year: one from the Discoveries sector at Art Basel in Hong Kong and one from the Positions sector at Art Basel in Miami Beach. An independent panel of judges shortlists three artists from each fair, who are then tasked with crafting an itinerary for their proposed journey. Reynolds was selected from the 2016 Hong Kong shortlist, for a project she titled “The Ruins of Time: Lost Libraries of the Silk Road.”
Reynolds’s fascination with books is longstanding. She studied English literature at Oxford University before changing course and pursuing fine art, first at Chelsea College of Art and then at Goldsmiths. But even as she launched her artistic career, Reynolds remained immersed in words through a part-time job at the Oxford English Dictionary. Each day, she would spend several hours holed up in Duke Humfrey’s Library on the Oxford campus, locating proof of the first time a particular word in the English language was used in print. 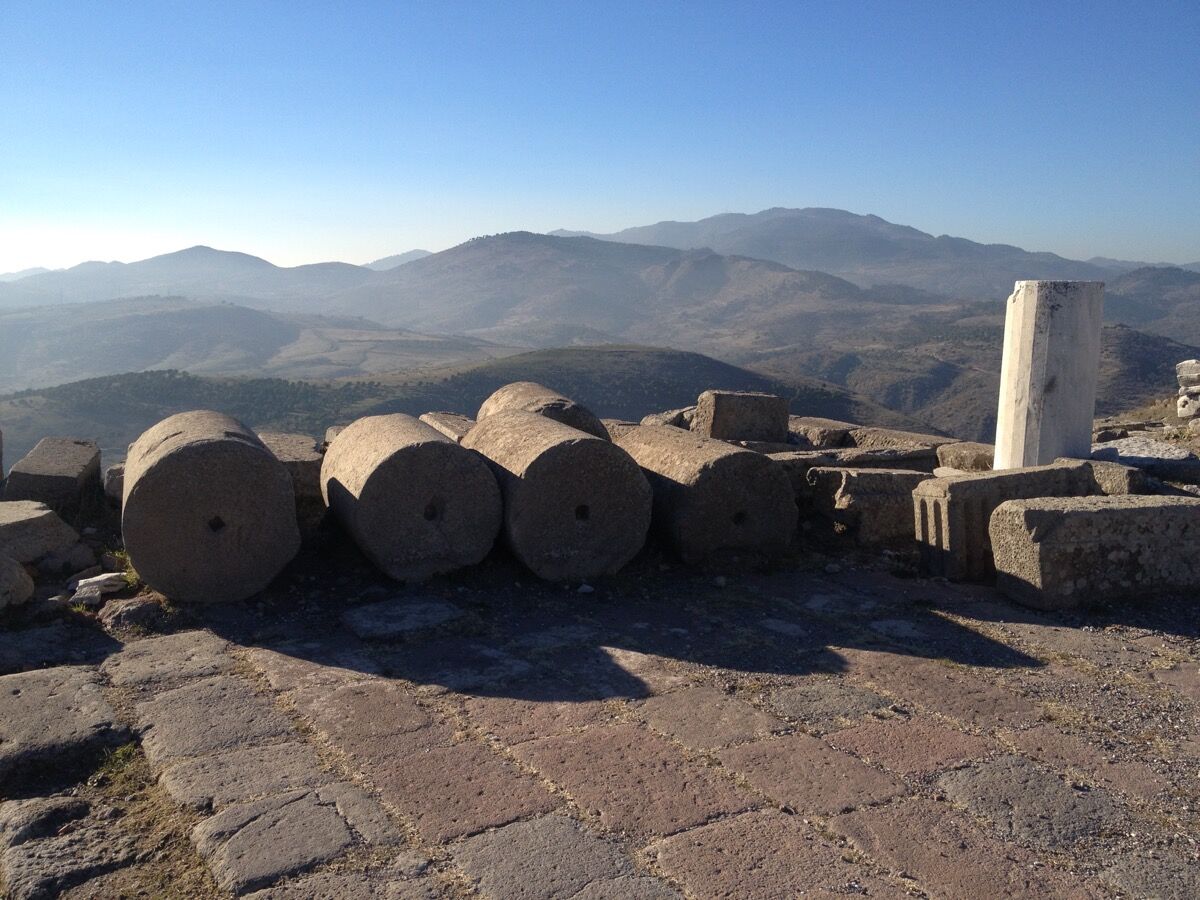 “Working for a dictionary gives you an incredible respect for libraries, for voices traveling through time and the attempt to be encyclopedic about knowledge, even if it’s doomed to fail,” she said. Her art journey offered “an opportunity to inhabit both of those worlds for a bit,” she said, “to connect my enjoyment of books and what they are and libraries and what they meant to me with my visual work.”
As an artist, Reynolds is perhaps best known for her collages, which splice together archival images in geometric, three-dimensional patterns. She is particularly interested in the passage of time, scouring old bookstores and flea markets for encyclopedias or guidebooks that offer decades-old views of a given landscape.
Advertisement 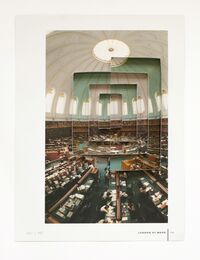 6 Images
View Slideshow
She also incorporates images of what she terms “communal structures”—protest marches, highways, colleges. “They are portraits of a community rather than of an individual, and for me that’s what a library is,” Reynolds said.
“That is why they are often destroyed, because it’s a really quick way to damage a group identity,” she continued, referencing the recent destruction of libraries in the former ISIS stronghold of Mosul. “It feels like a body blow to lose all of those texts.”
To plan her itinerary last spring, Reynolds spent several breathless weeks reaching out to academics and conducting her own intensive research into the world of lost libraries. In the end, she settled on 16 locations placed loosely along the path of the Silk Road. 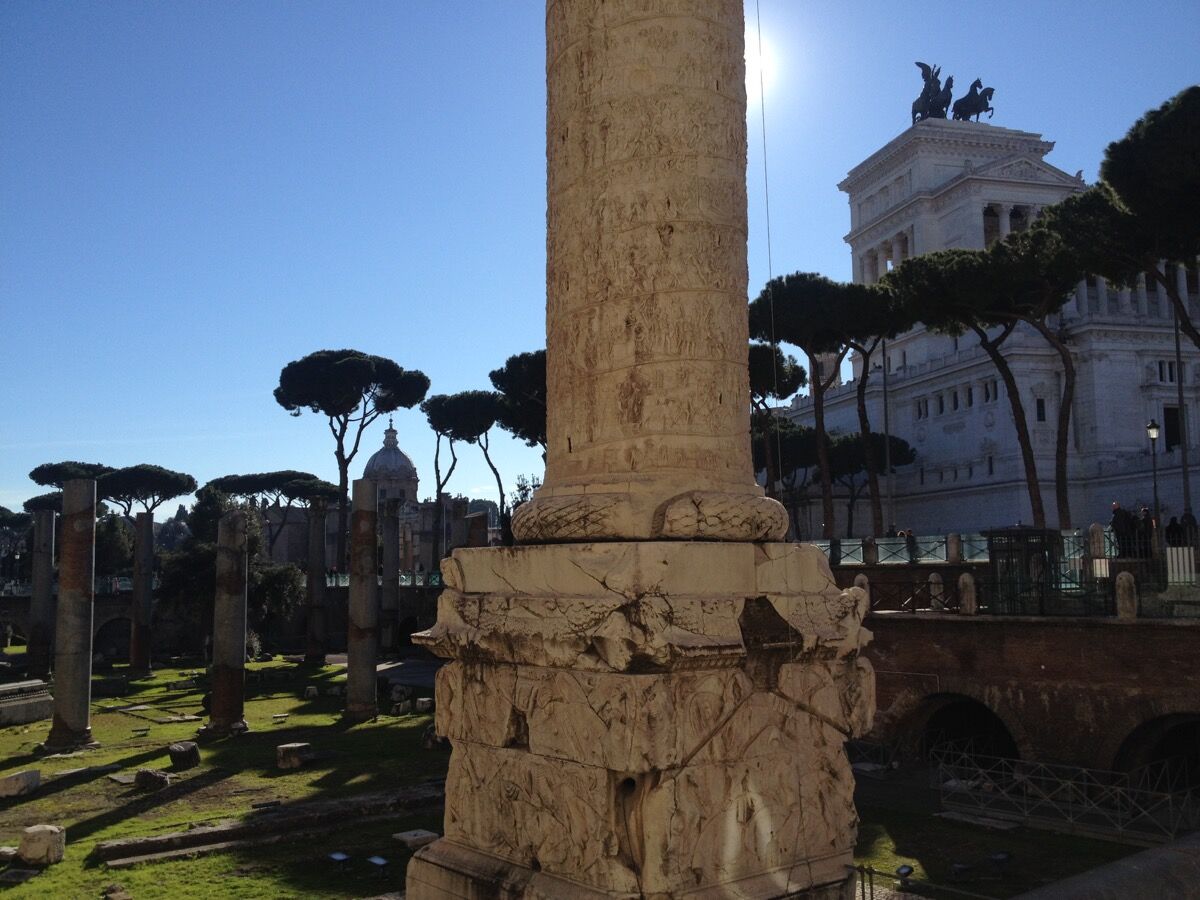 Some were lost centuries ago: Trajan’s Column is all that remains of Rome’s Bibliotheca Ulpia, which disappeared around A.D. 600. Others were destroyed during her own lifetime, and even this decade—the most recent on Reynolds’s list is Cairo’s Institute of Egypt, which was ransacked during a clash between protestors and the military in December 2011.
“I think that the scope and scale of her travels—going to a lost library that was destroyed 200 years before Christ, the Xianyang Palace in China, to another library destroyed by Genghis Khan—brings together many of these things that she’s interested in when it comes to archiving, collecting, creating a cultural heritage,” said Thomas Girst, head of cultural engagement for BMW Group. “But at the same time, she’s exploring the vulnerability of these places and how essential knowledge can get lost and can get eradicated.”
When Reynolds proposed this journey to the panel of five judges—including Richard Armstrong, director of the Solomon R. Guggenheim Museum, and Claire Hsu, director of Asia Art Archive—they selected her project by unanimous vote, Girst revealed. 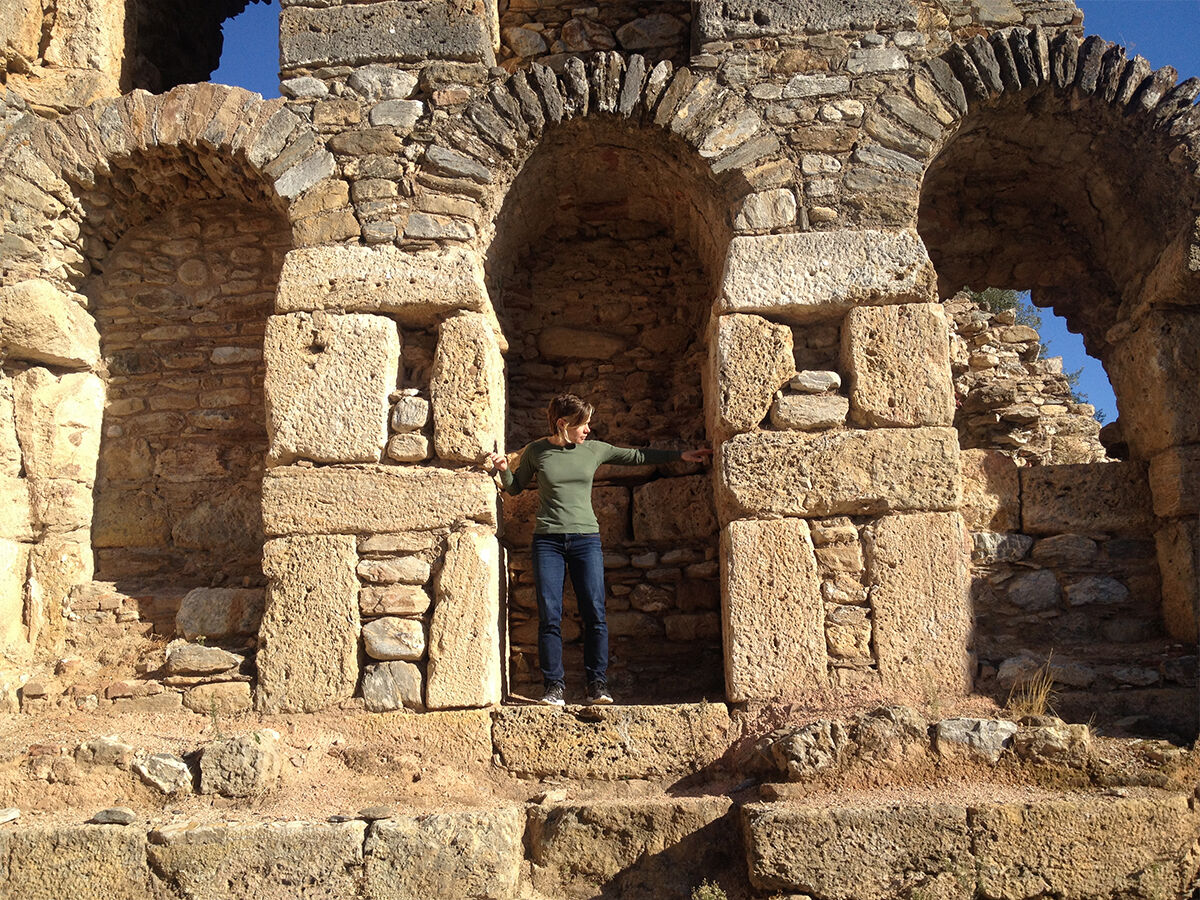 Reynolds was announced the winner in March 2016, and five months later she set out on the first portion of her journey. When she wasn’t flying, she traveled via motorcycle; she’d learned to ride several years earlier. Reynolds also brought along a Bolex camera, which, at five-and-a-half pounds, was “heavy and awkward and the opposite of digital filming because it’s so slow and old-fashioned.” But she appreciated its complicated set-up, she said, because it helped structure her visits to sites where often little or nothing remained.
Reynolds’s stop at Xianyang Palace was in many ways emblematic of the entire trip. Despite her guide’s resistance, she was able to pinpoint the location of the former library and visit the heritage museum constructed in its place. But it turned out to be dusty and underwhelming and smelled suffocatingly of mold. In short, it retained nothing of the place it was meant to memorialize.
“I was making this huge effort to travel and arrive in the present moment at spaces where every meaningful shred that was there was evacuated thousands of years ago, and to just stand there,” she said. “And that was also very dislocating.” 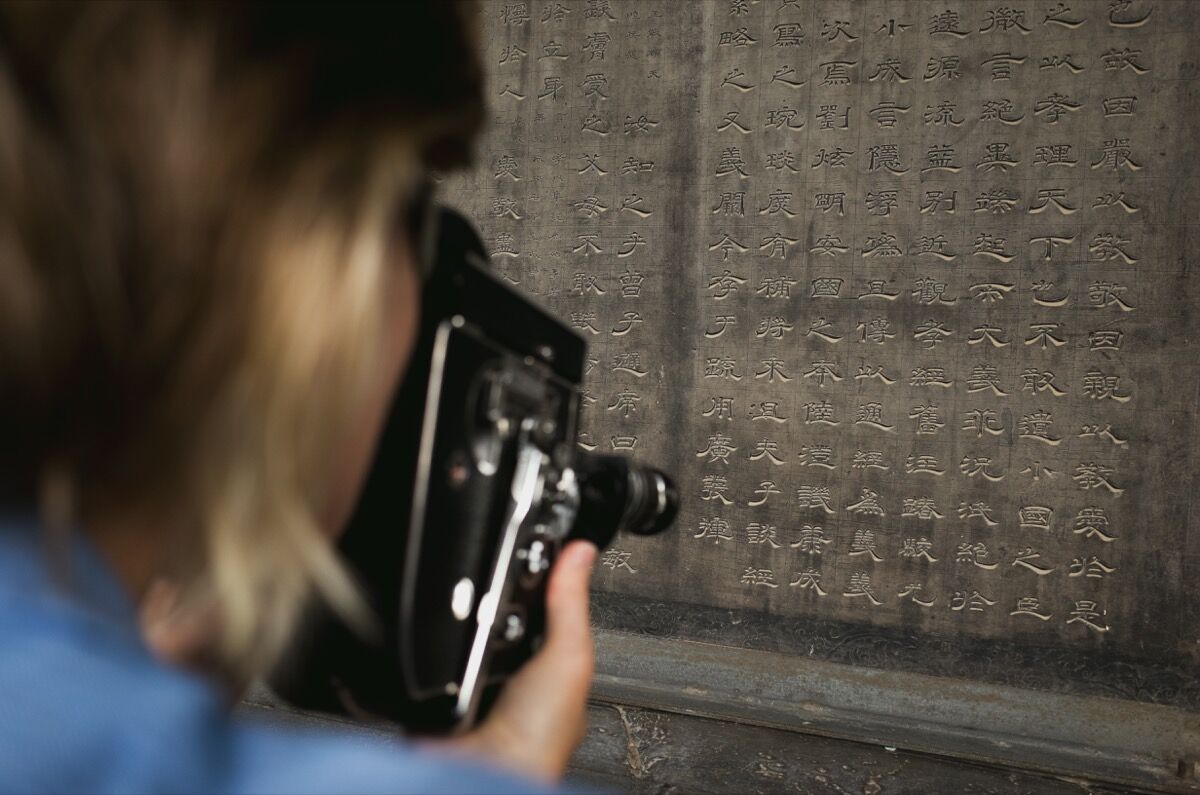 This sense of dislocation was heightened, Reynolds said, by the cultural differences between the West and the places that she visited. She understood neither the language nor the customs she was exposed to, making the whole experience “very discombobulating.” In Cairo, she was even arrested for filming the Institute of Egypt, although the authorities released her after a scolding.
“Very often I couldn’t get to the place I wanted to get to because of barriers that were in my way,” she said. “Often these were bureaucratic, sometimes they were deliberate obfuscation.”
The resulting frustration imbues the works she’s produced for the 2017 edition of Art Basel in Hong Kong and led her to consider the motif of a screen or grille of the sort one would find in a confessional. “I was traveling to these blanks, these places where there was nothing. So the sense of the deflected look, a screen or structure that was impeding flow but also seeming to allow it—those kind of elements have become important in the work.”
The Bolex footage, for example, is concealed behind two-way mirrors and textured glass. “I wanted to take something of my emotional state while I traveled,” she said. “It felt like constantly being on a threshold. I could sense the other side in some way, or I knew things about it, but very often I couldn’t reach it.” 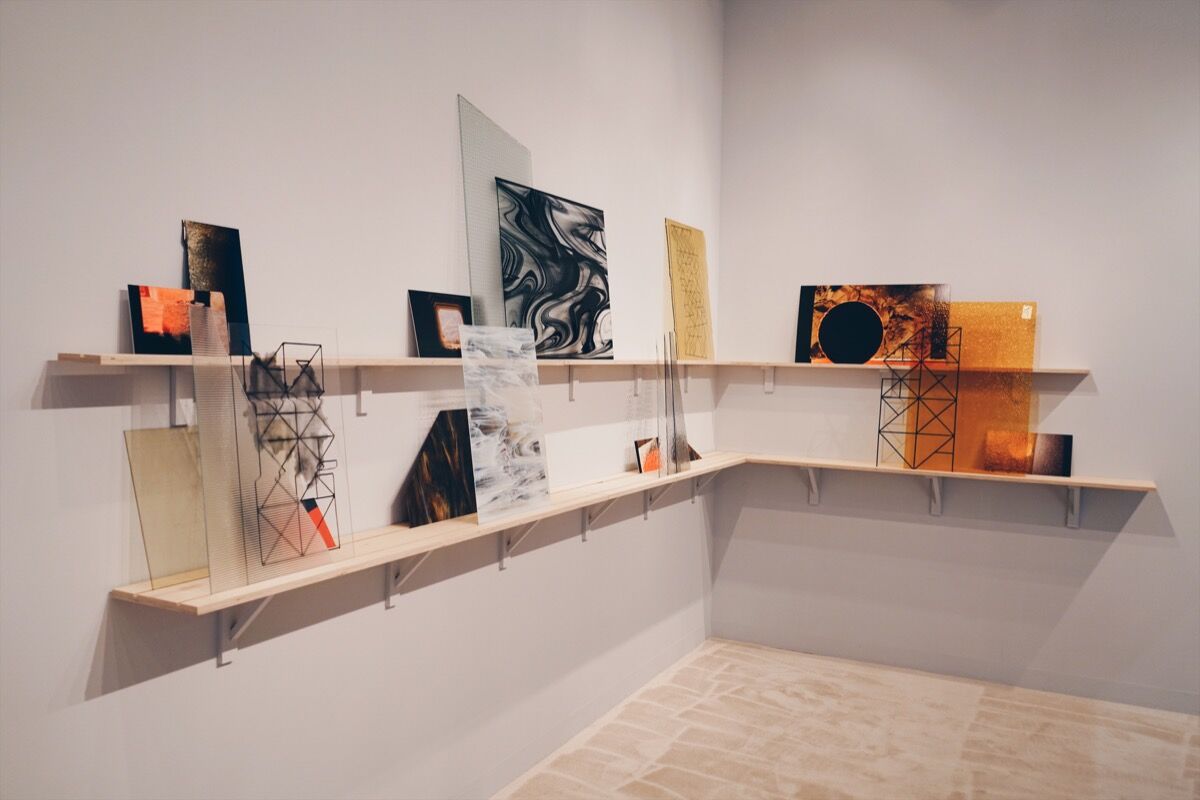 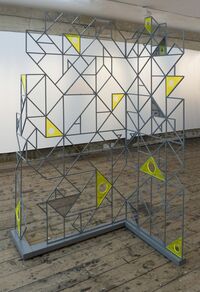 3 Images
View Slideshow
Her final destination was the Library of Alexandria, which was famously (and accidentally) burned to the ground by Julius Caesar when he came to Cleopatra’s aid during an Egyptian civil war. Despite its storied history, particularly for the West, Reynolds found it deeply disappointing—a “public relations exercise” with a collection that was almost entirely digital.
Instead, she was struck most by a lost library in the Iranian town of Nishapur. The structure’s bloody history belies its name—Shadiyakh, or the “Palace of Happiness.” Legend has it that when the husband of Genghis Khan’s daughter was murdered in Nishapur in 1221, all 1.7 million residents of the city were put to death in retaliation. But that violent past, true or not, has slowly been subsumed. Now, small hills of hard-packed dirt are all that’s left of the complex. 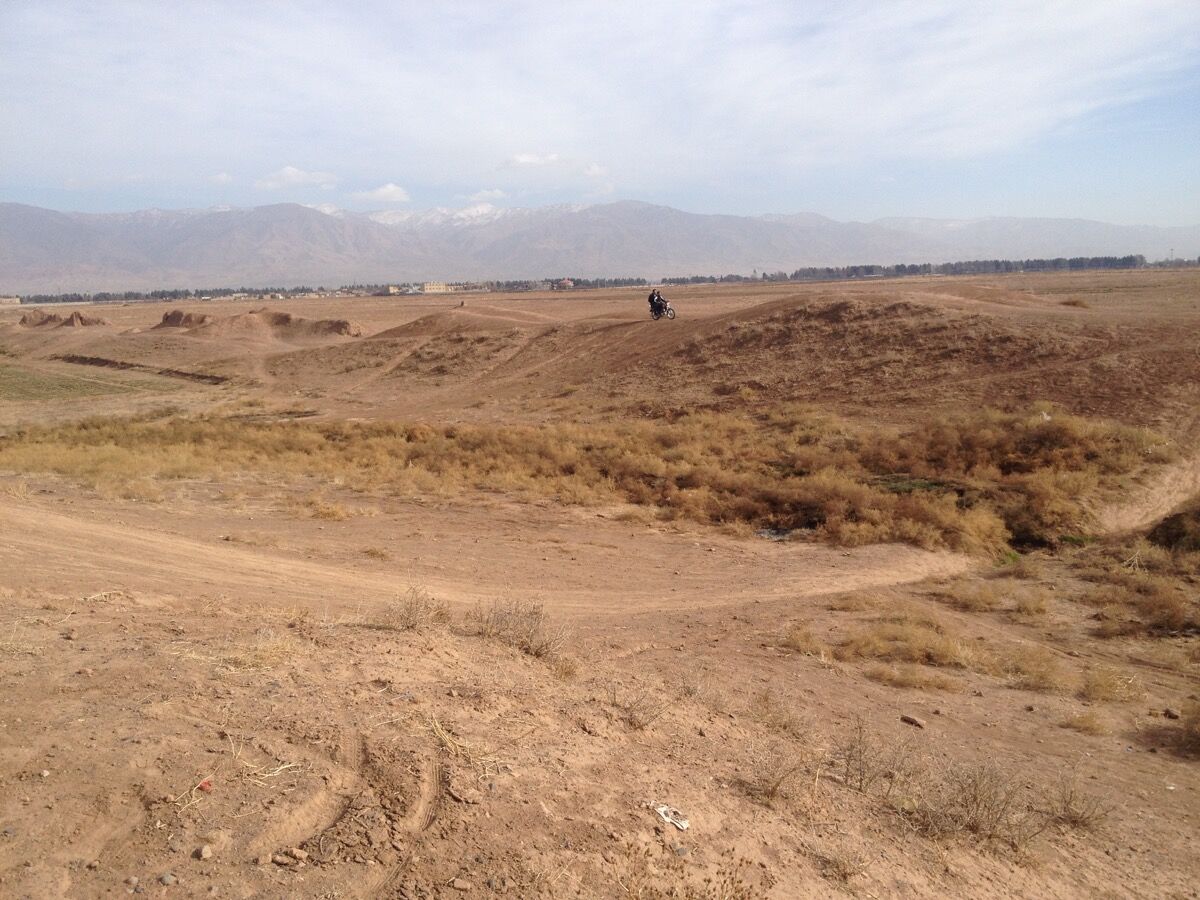 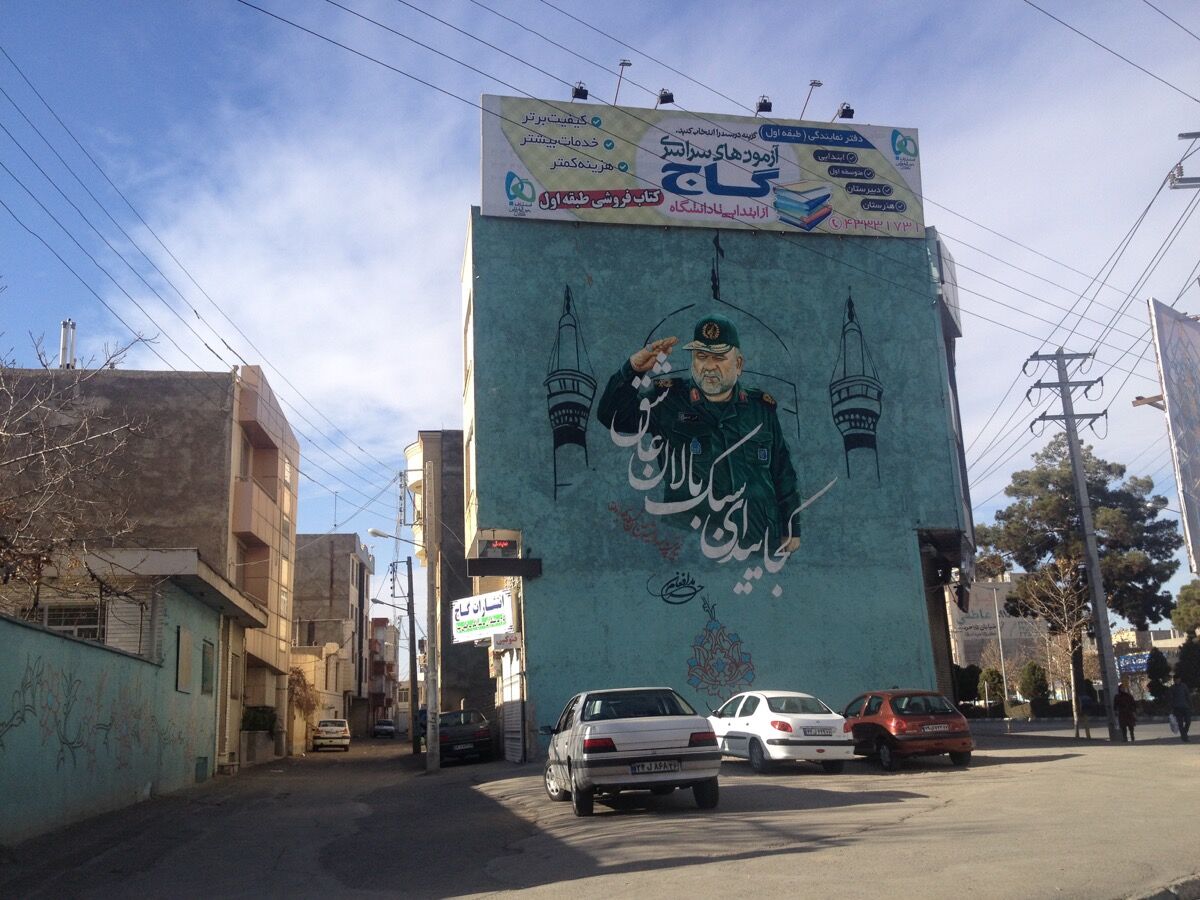 “There used to be this incredible seat of learning and wealth and culture,” she said. “Now it’s just a playground for teenage boys on their motorbikes. And I felt very happy there.”
Abigail Cain
Further reading in Art