Adam Fuss on His Cameraless Images and Experimenting with Live Snakes

Alexxa Gotthardt
Sep 21, 2015 8:14pm
It was feeding time at
Adam Fuss
’s studio—the announcement came with the unexpected creak of the front door. An assistant had dropped by to feed the photographer’s 20 or so snakes, housed in plastic boxes labeled according to their personalities: “Nice-ish,” “Biter!! Mean,” and “Satanic Reptile from Hell.” The timing felt appropriate. Moments before, Fuss and I were musing over the cover of a Hare Krishna pamphlet, one of the many curiosities scattered around his workspace. It illustrated the life cycle of a man from birth to death, each stage connected by a glowing, serpentine line resembling, yes, a snake. 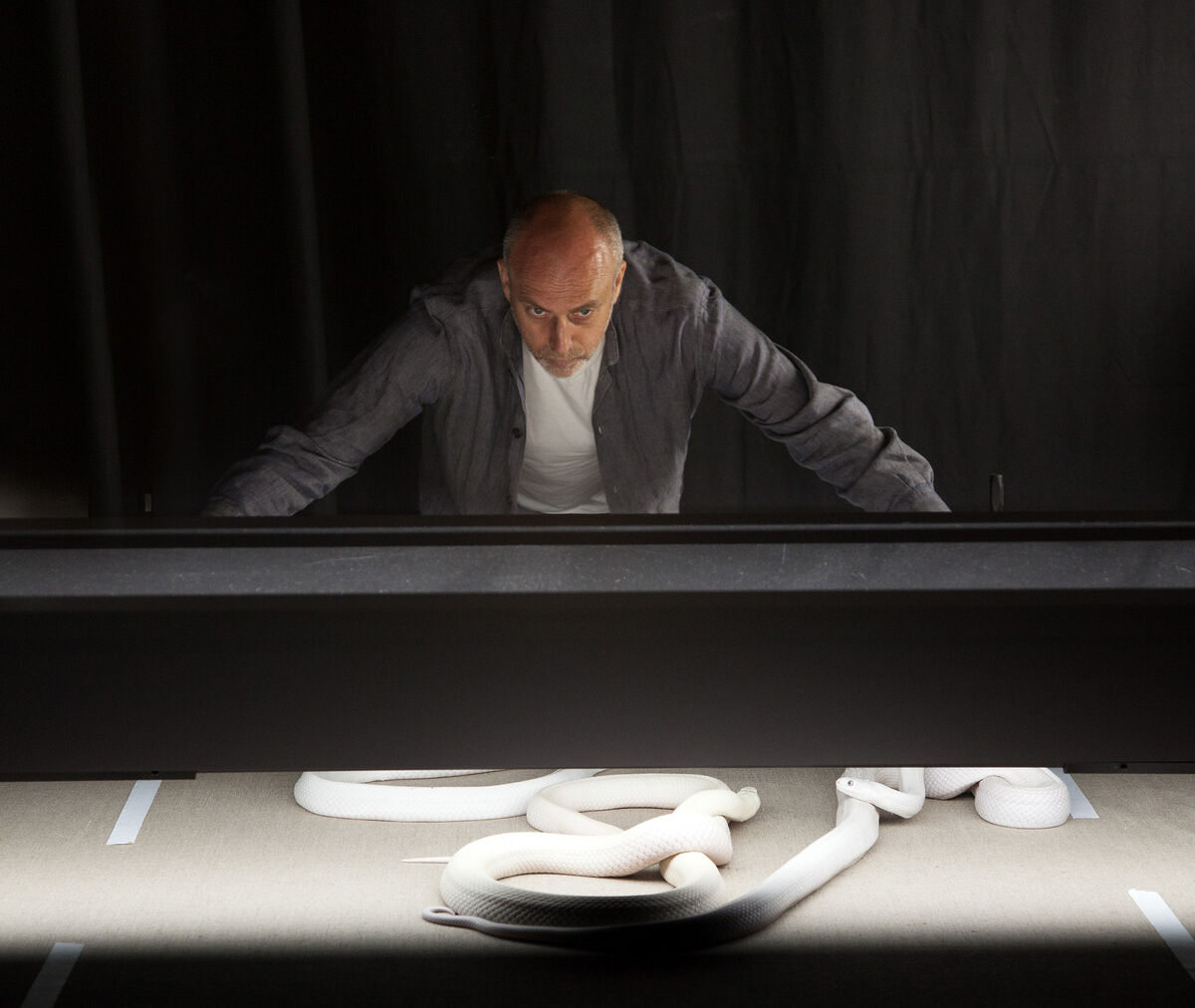 Fuss has incorporated his snakes, both the ornery and the cooperative, into his current show of photographs at Cheim & Read. Their dispositions don’t register in the images, but their mysterious movements and symbolic weight—as biblical and mythological creatures that stand for both good and evil, life and death—do. Made with just a scanner, a printer, some linen, and an animal, these are tall, perplexing, and ultimately mesmerizing images. The exhibition, enigmatically titled “λόγος” (a term Ancient Greek philosophers used to describe the connection between the earthly and the divine, the rational and the spiritual), also unveils massive, wall-scale photograms of cascading water and translucent curtains. The three distinct series come together as an unexpectedly balanced trio—one that nods both to Fuss’s long relationship with cameraless photography, and to his penchant for capturing invisible energies in images. 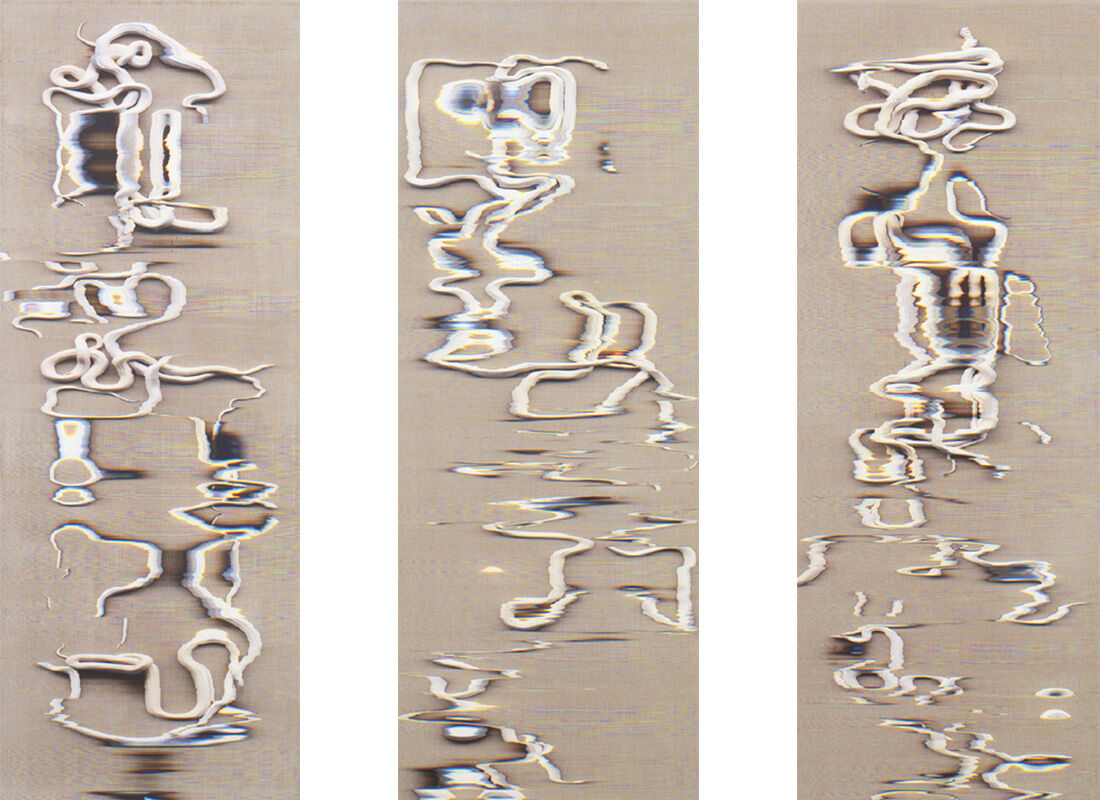 Advertisement
The works at Cheim & Read mark a new direction for Fuss, but also a return to familiar techniques and themes. Some of his first photograms and images of snakes were made in the late 1980s. After losing his job working as a Eurobond settlements clerk in London, he followed a friend, the artist Simon Frost, to New York in 1982. “I was homeless, squatting, single, and jobless when Simon invited me to New York,” Fuss says. “I felt at home within five minutes, so I stayed.” He settled in Williamsburg and started photographing the neighborhood’s then-abandoned buildings and streetside debris.
Using a camera—or, as he’ll tell you, “abusing the camera”—he layered multiple images, mixed daylight and flash, and tried to create something complex. “That camera, and the cameras made today, are made to take clean, sharp, well-exposed pictures,” he explains. “I had one of those, and I was trying to use it in a untraditional way; to produce a different kind of picture.” But printing the images was too expensive, so he staged slideshows in clubs like the infamous Pyramid Club in the East Village. He wasn’t satisfied with the results. 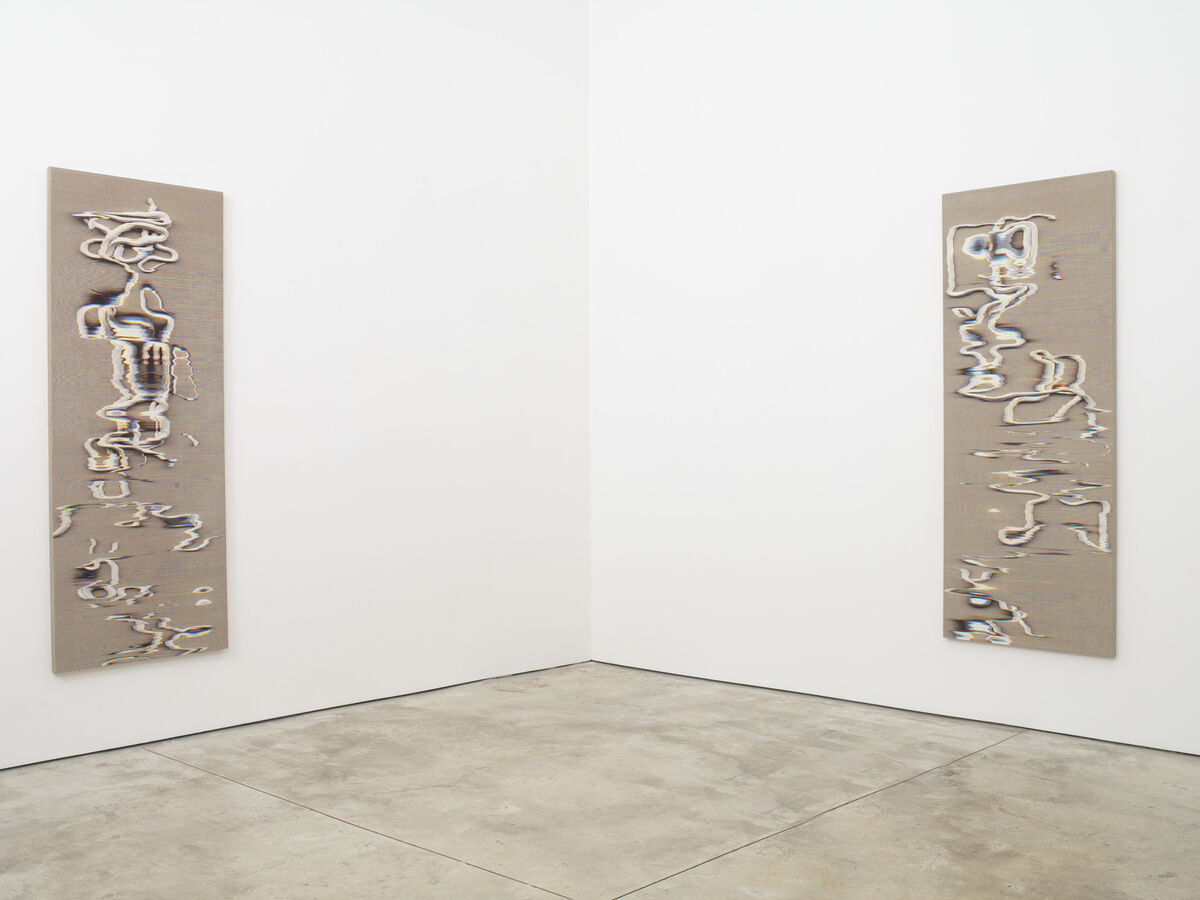 Fuss was never formally trained in art, but it was around this time that he showed his work to an art teacher who responded with a one-line lesson that would inform his entire career. “Before I’d even shown him my photographs, I’d apologized for them: ‘They’re not very good, but that’s because my camera’s not very good,’” he recalls. “This teacher looked at me and said: ‘Don’t worry about that, because you can take the best pictures in the world with a pinhole camera.’ That one sentence changed my life—that was my entire education.”
So Fuss set aside the traditional camera in favor of the pinhole, a contraption made simply by puncturing a cardboard box or tin can with a tiny hole, allowing a piece of film placed inside the box to be exposed to light. At the time, he was working as a waiter at the Met. Some nights, while catering parties in the Temple of Dendur, he would pass through the darkened, spotlit Greek and Roman hall on his way back to the kitchen and sneak photos of the sculptures. “During the day, at the museum, the sculptures were stripped of their essence as religious objects, carved personifications of gods, goddesses, and heroes,” says Fuss. “What I experienced at night was closer to their potency. I discovered that I could take pinhole pictures that captured some of that atmosphere.” 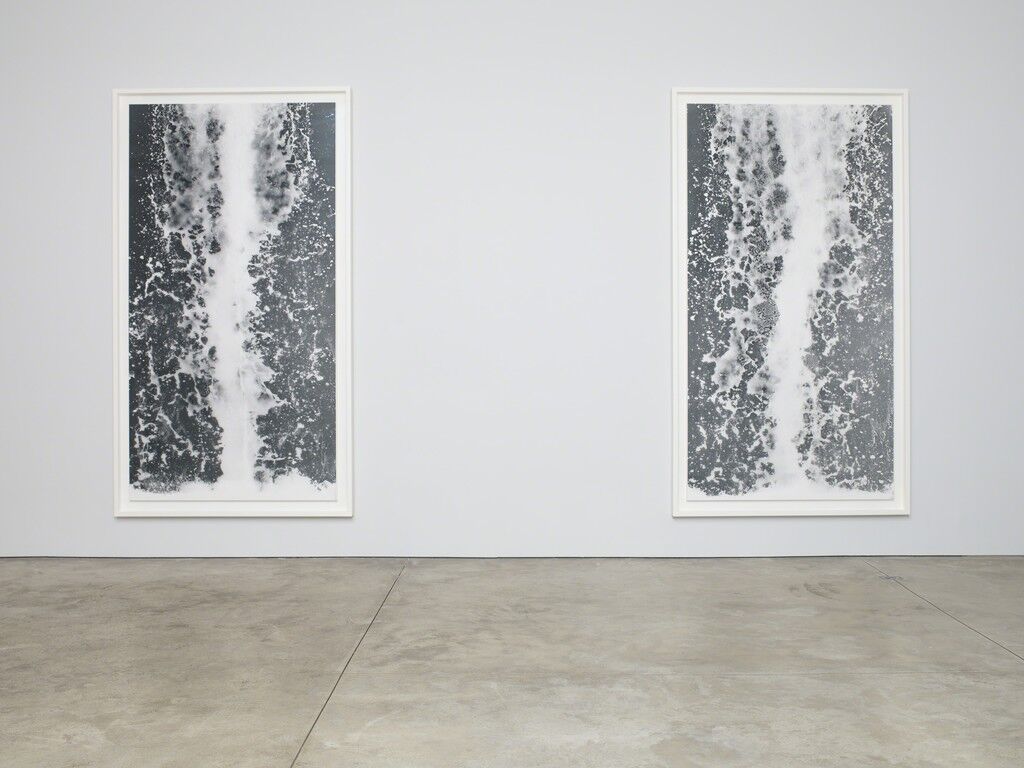 But the pinhole had limitations (of scale, malleability), and he looked for new ways to push his process. That was when he discovered that he didn’t need a camera at all to make absorbing, experimental images. “I discovered the photogram, the cameraless image. I could make pictures without the outside world,” says Fuss. “That was a major highway for me that I’m still on—this idea that you don’t take the image, you make the image.” It was around then, in the late 1980s, that he placed water and a live snake on top of photosensitive paper, then exposed the concoction to a flash of light. It has become one of Fuss’s most iconic images.
Since then, Fuss has become known for photograms of symbolically charged subjects that seem to radiate auras. Babies, smoke, flowers, and birds in flight are pared down to silhouettes, and rimmed with glowing color or rippling water. He has also returned to the analog camera and experimented with gelatin silver printing and daguerreotype, pushing the capabilities of any camera, black box, or machine at hand. 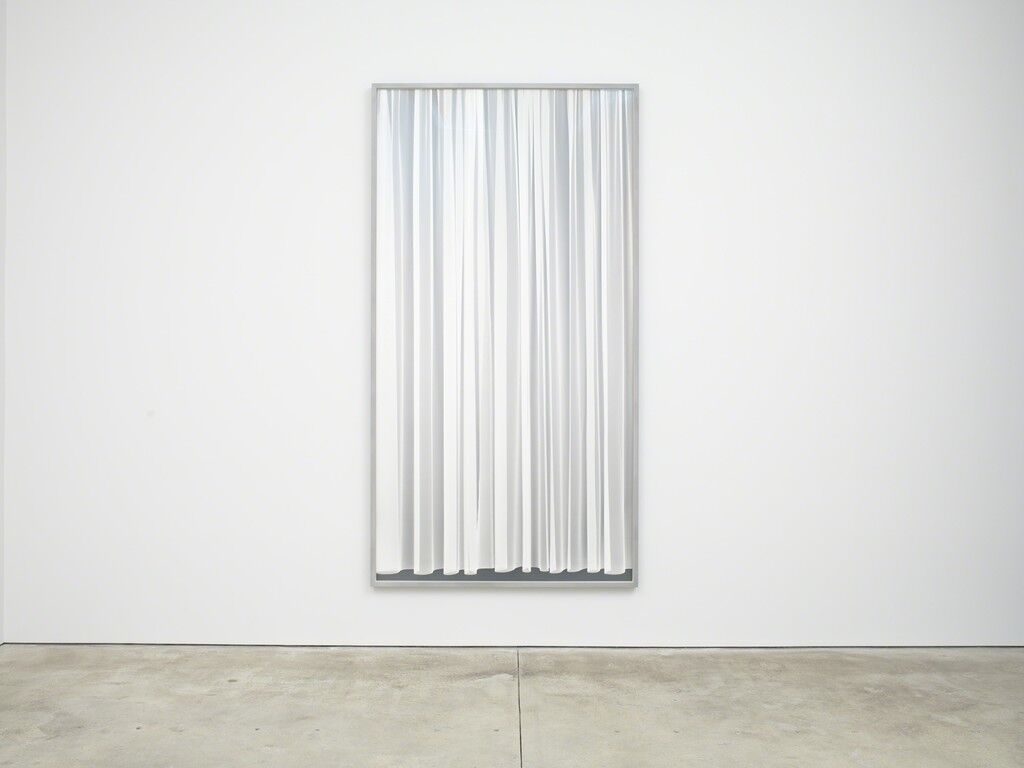 For the works on view at Cheim & Read, he employed two new tools—a massive, industrial-scale scanner that he traveled to Pennsylvania to use, and a 100-gallon bucket of water that he suspended from the ceiling of his studio. The resulting works capture life forces and energy fields. Photograms of curtains are serene, resembling gigantic shrouds. Towering black-and-white images of gushing water, made by tipping the aforementioned bucket onto a vertically rigged piece of photosensitive paper, exude vigor. And the abstract, off-register scans of snakes occupy a space in between, a liminal zone where atmospheres seem to percolate and regenerate.
As we talk about nature’s unseen energy and photography’s uncanny ability to capture it, we’re reminded of the Hare Krishna illustration that began our conversation. “That’s sort of what that image is—it’s life moving across time,” says Fuss of the pamphlet cover. “I love this idea that 99.999 percent of all species that lived on the earth are extinct, yet the DNA continues. So to me, that image is a snake form, it’s a wave form, it’s an energy form, and it’s also stranded DNA.” Fuss’s images shapeshift in just this way—from representational to abstract, organic to ethereal—solidifying as timeless symbols and mystical talismans.
Alexxa Gotthardt
“Adam Fuss: λόγος” is on view at Cheim & Read, New York, Sep. 10–Oct. 17, 2015.
Follow Cheim & Read on Artsy.
Related Stories

The 10 Best Booths at Art Basel in Miami Beach Online 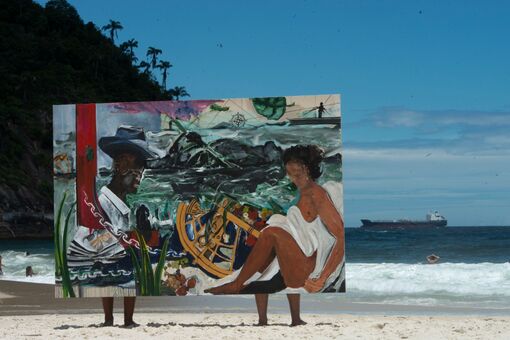 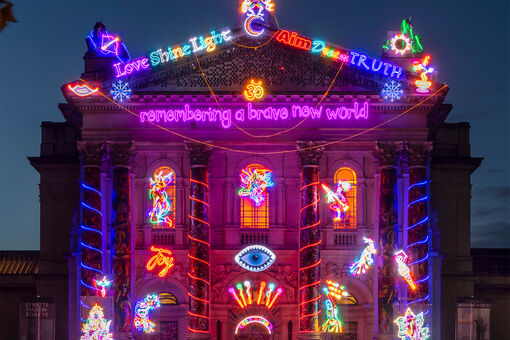 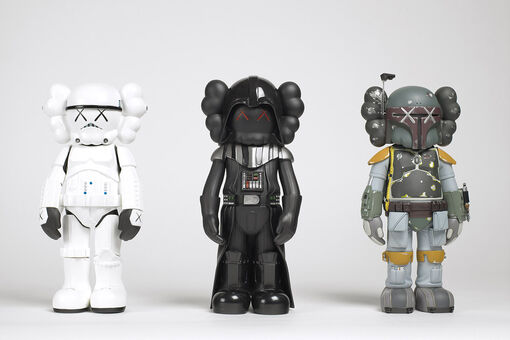 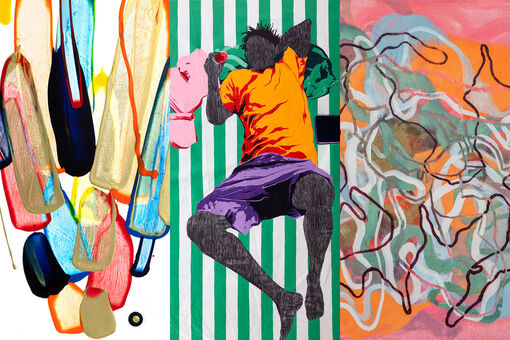