Agnes Martin on Resisting the Urge to Be Alone 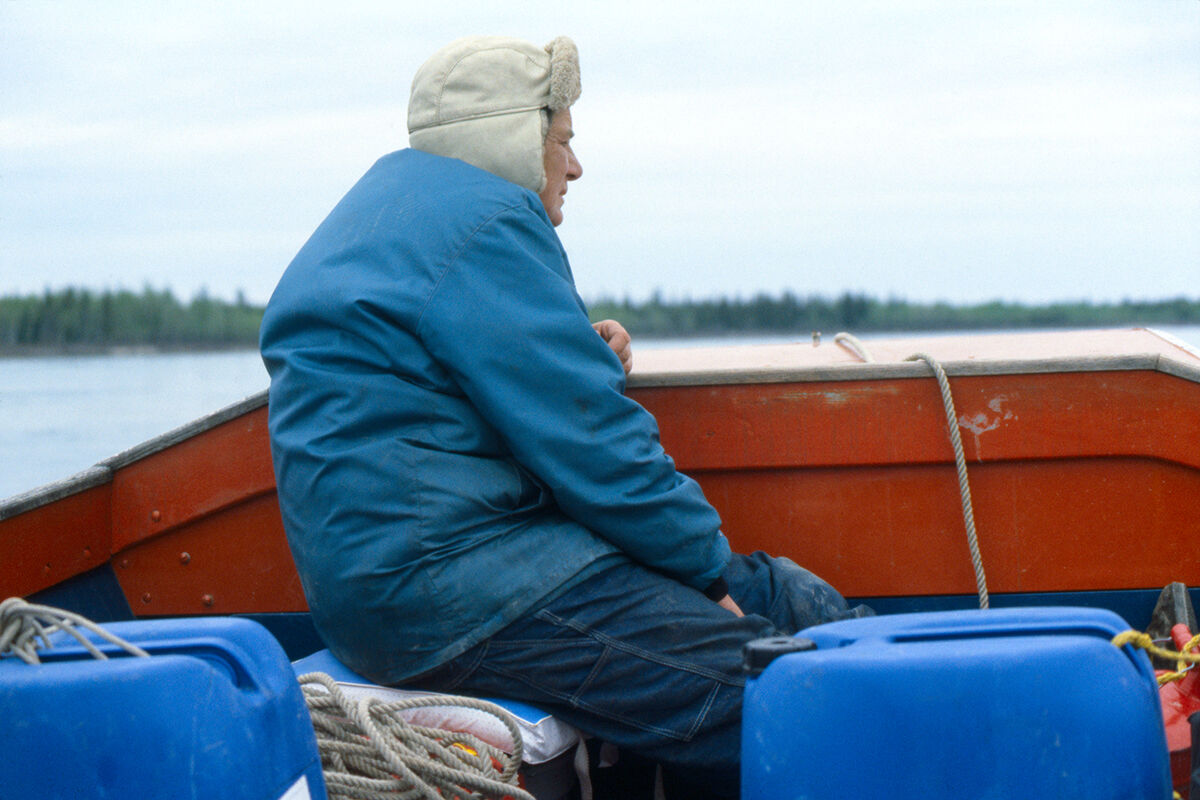 Apart from her luminous gridded canvases,
Agnes Martin
is best known for leading a somewhat ascetic life. After a stint in bustling New York City in the 1950s and ’60s, the painter headed to rural New Mexico, where she settled temporarily on a plot of land without electricity or a telephone. But contrary to many headlines broadcasting the artist’s spartan ways, she fervently resisted total seclusion. Martin deeply valued artistic dialogue, intimate friendships, and the occasional rowdy dance party.
“A lot of people withdraw from society, as an experiment. So I thought I would withdraw and see how enlightening it would be,” she told art historian Suzan Campbell in 1989, some 20 years after she’d left Manhattan for New Mexico. “But I found out that it’s not enlightening. I think that what you’re supposed to do is stay in the midst of life.” Indeed, Martin’s long life—she passed away in 2004 at the age of 92—could be described as a delicate balancing act between mind-clearing isolation and meaningful, inspiring social interaction. 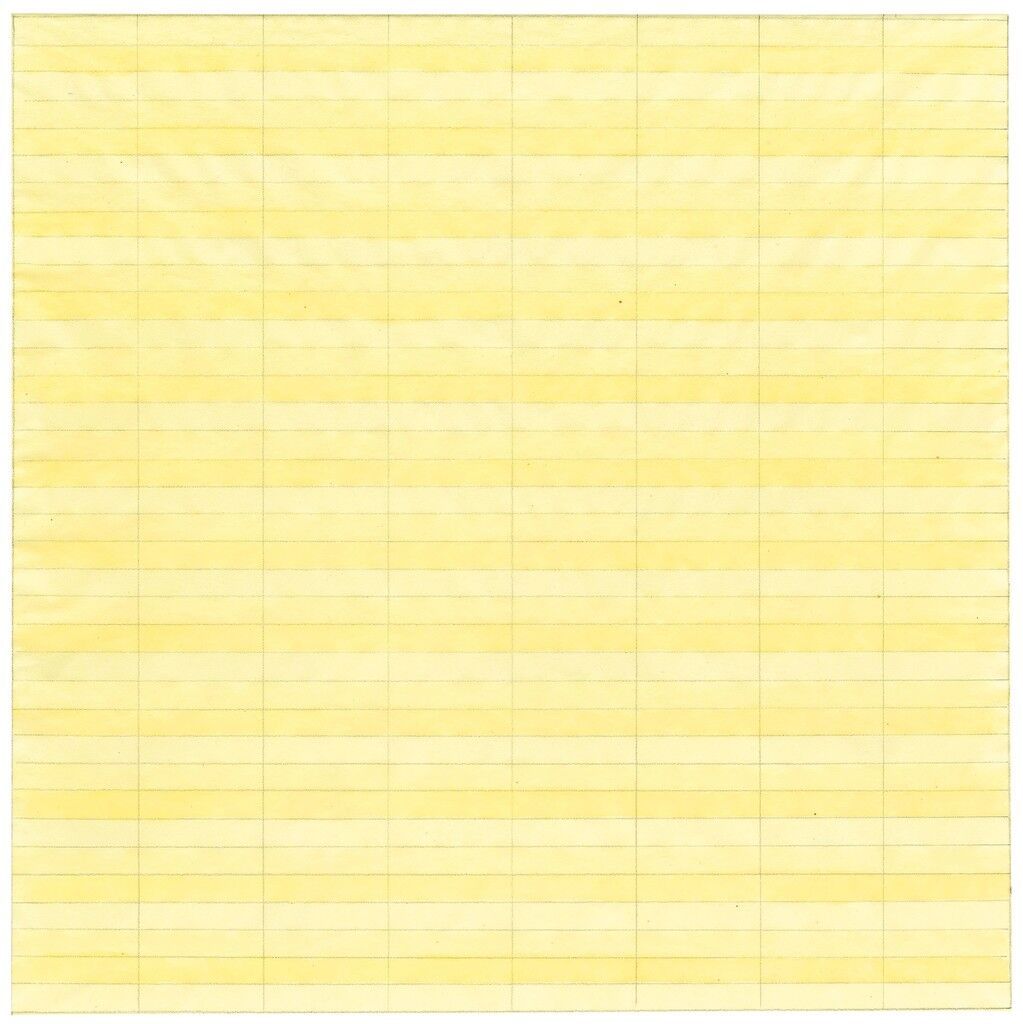 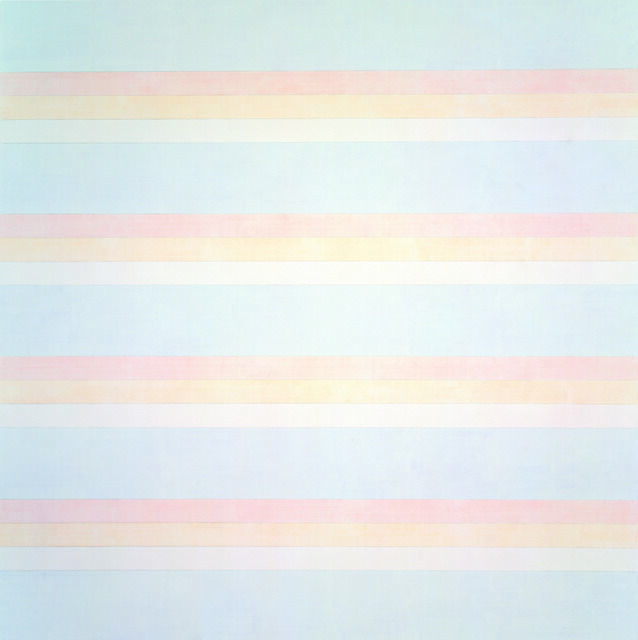 Agnes Martin
Untitled #2, 1992
"Agnes Martin" at Guggenheim Museum, New York
She was born in 1912 in the small rural town of Macklin, Saskatchewan. After high school, where she described herself as outgoing and even promiscuous, she became a teacher—a job that hinged heavily on communication and placed her at the center of large groups. But many of the schools where she taught were decidedly backwoods, like a one-room Idaho schoolhouse tucked “in the forest,” as Martin recalled to her friend David MacIntosh, who was interviewed for Agnes Martin: Her Life and Art (2015), the authoritative Martin biography by Nancy Princenthal. “I believe she was completely alone,” MacIntosh said of this stretch of Martin’s early adulthood.
But Martin was never completely alone for long. In 1941, she made a conscious decision to relocate to the population-dense hub of New York City, where she enrolled at Columbia Teachers College and, surrounded by the city’s density of museums and thriving art scene, began her painting practice in earnest. This period in Manhattan was brief, lasting only a year, but Martin returned regularly. In 1957, at the urging of art dealer Betty Parsons, she went back to New York and stayed for a decade—years, as Princenthal described, “of incredible [artistic] growth.”
There, while living in the artist haunt Coenties Slip, Martin forged some of the most important relationships of her life.
Ellsworth Kelly
became a close friend, and the two regularly discussed the burgeoning movement of abstraction, with their ideas rubbing off on each other. Martin also spent significant time with fiber artist
Lenore Tawney
and neon sculptor
Chryssa
. The composer
John Cage
entered as an important influence, too, especially in his translation of Zen Bhuddist philosophy into art. 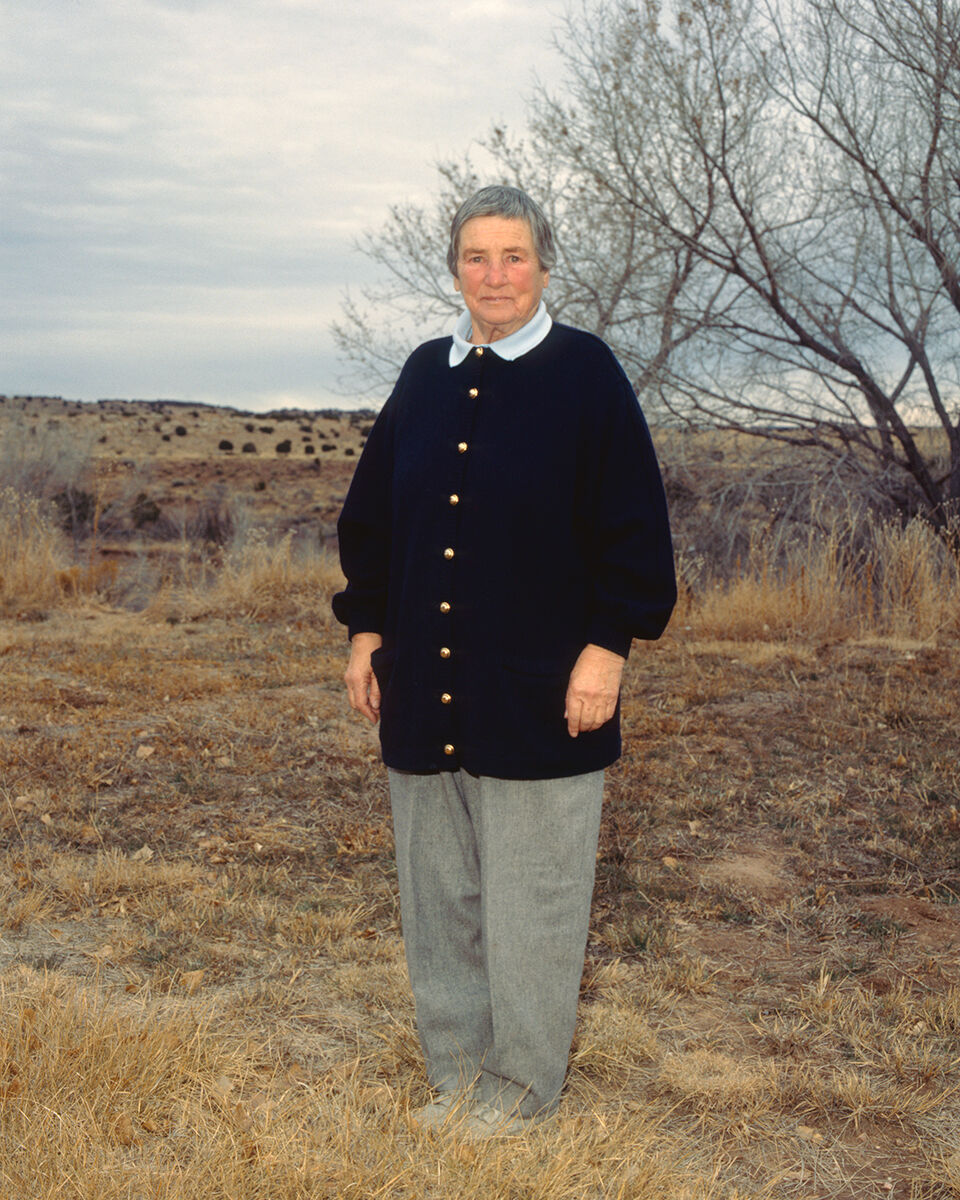 Advertisement
But Martin also struggled with the pressures of city life and the commercial art world. In 1967, after suffering from a psychotic episode—Martin was diagnosed with schizophrenia and was prone to debilitating anxiety—she abruptly left New York. She later attributed the move to “an overdeveloped sense of responsibility” she felt in the city.
A period of relative solitude that lasted 18 months ensued, taking Martin on a circuitous journey across North America. But even when she made lofty plans to “[stay] unsettled and [try] not to talk for three years,” as she wrote to curator Sam Wagstaff while on the road, Martin remained in frequent written contact with her artistic community and certainly didn’t stick to her vow of silence. As Princenthal has pointed out, “even the unbroken solitude often attributed [by scholars and writers] to this period (with Martin’s blessing) is overstated.” Tawney accompanied Martin on part of the journey, which took them from Big Sur, California, to Las Vegas. Martin’s trip ended in New Mexico, where she’d homestead for the rest of her life. 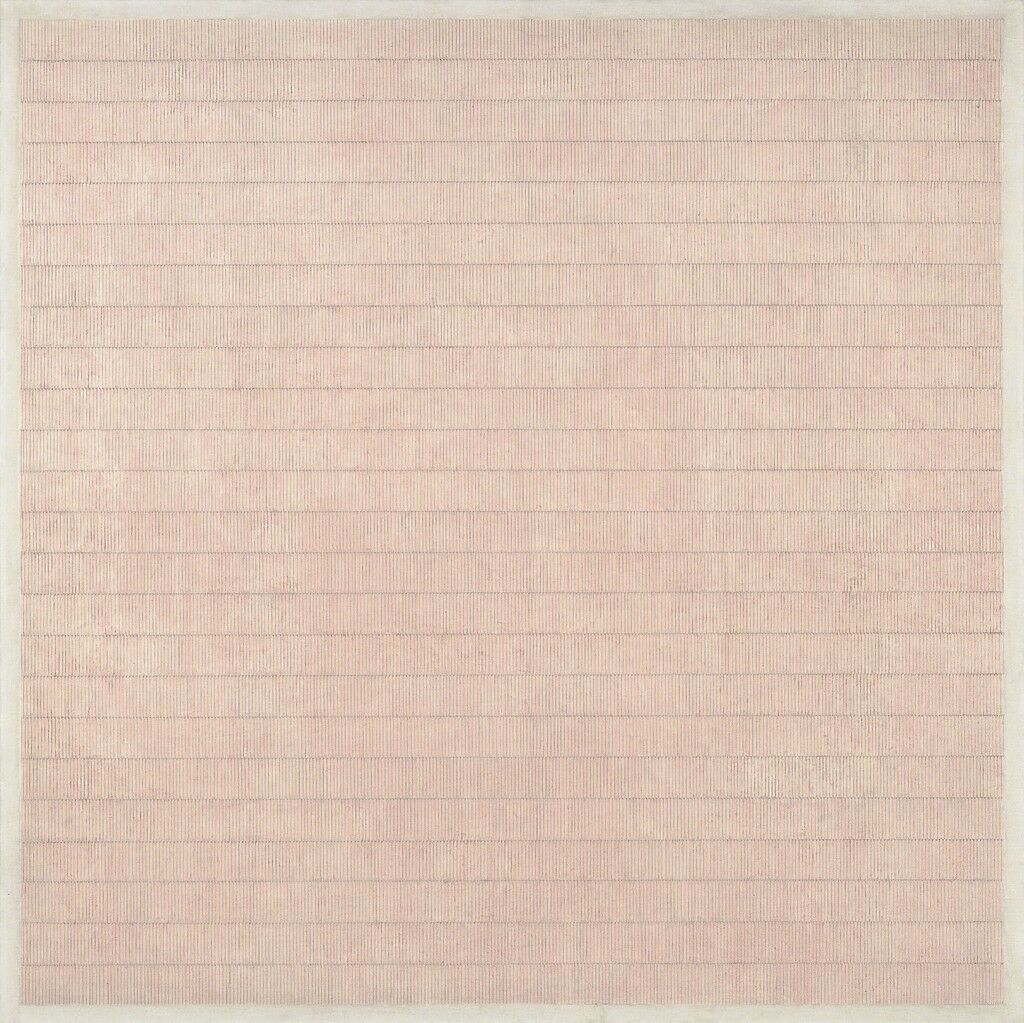 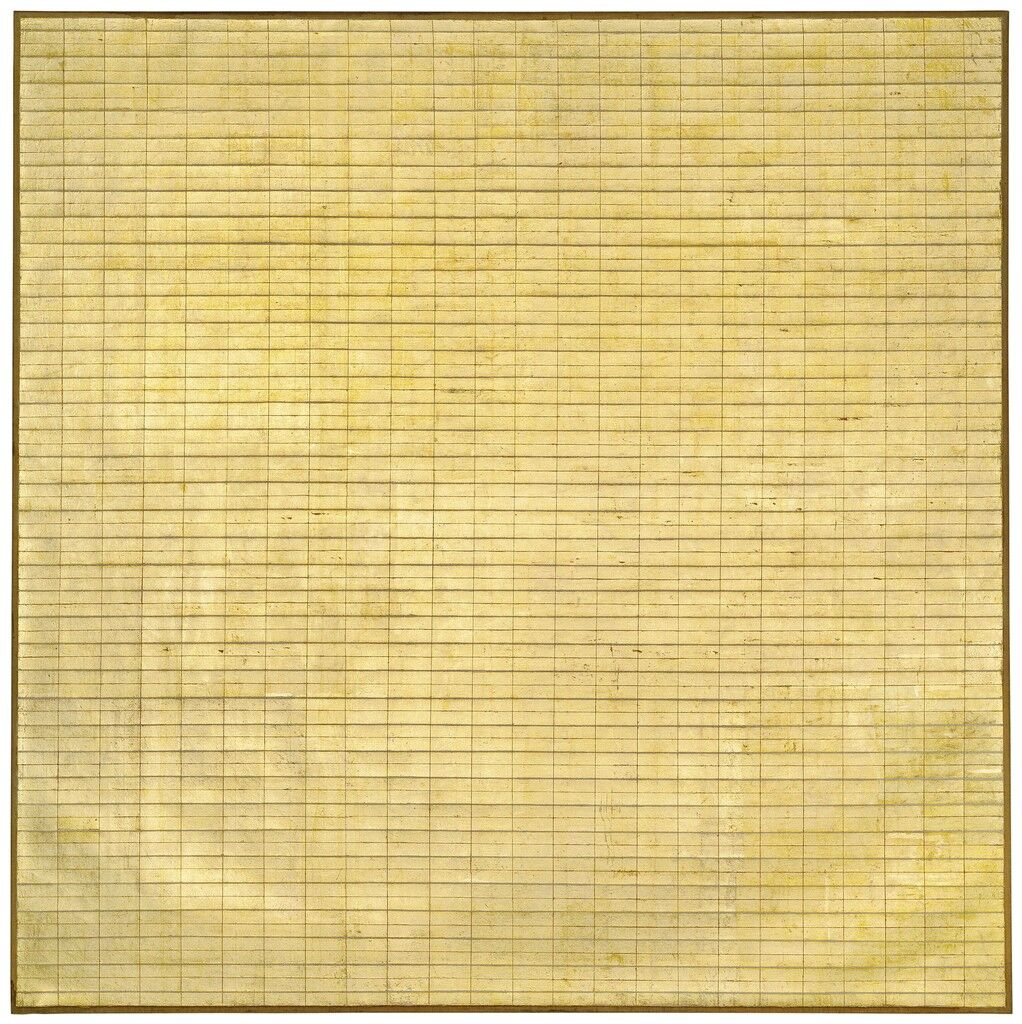 Agnes Martin
Friendship, 1963
"Agnes Martin" at Tate Modern, London (2015)
Her first home in the Southwestern state was on the secluded Portales Mesa, located some 20 miles of dusty desert from the nearest highway. In her early years here, she extended the break from painting she’d taken while on the road and, in 1972, penned a profoundly moving essay titled “The Untroubled Mind.” In it, she celebrated the calming, emancipating effects of isolation: “Solitude and freedom are the same,” she proclaimed.
Later, when she returned to making work, Martin continued to emphasize the importance of making art in seclusion—without people or even pets in tow. “To discover the conscious mind in a world where intellect is held to be valuable requires solitude—quite a lot of solitude. We have been very strenuously conditioned against solitude,” she wrote. “I suggest to artists that you take every opportunity of being alone, that you give up having pets and unnecessary companions.”
But as Princenthal has pointed out, Martin “spoke just as often of the devastation wrought by solitude.” After her attempts at total remove from society, it seems she realized that a balance was integral to both her life and work. In “The Untroubled Mind,” she wrote, “Asceticism is a mistake / sought out suffering is a mistake.” In her 1973 lecture “On the Perfection Underlying Life,” she elaborated with dramatic aplomb: “The solitary life is full of terrors.…Worse than the terror of fear is the Dragon. The Dragon really pounds through the inner streets shaking everything and breathing fire. The fire of his breath destroys and disintegrates everything.…The solitary person is great danger from the Dragon because without an outside enemy the Dragon turns on the self.”
For the remainder of her life—a period in which she made some of her most masterful canvases—Martin continued to battle the proverbial dragons that urged her towards total solitude. While hours in the studio were usually spent alone, they were paired with frequent hikes with friends and trips into the New Mexican towns of Taos and Galisteo where her ever-growing community of artists gathered. She saw
Richard Tuttle
and his wife, poet Mei-Mei Berssenbrugge, regularly; rubbed elbows with
Georgia O’Keeffe
; and invited many friends over to her house for home-cooked meals.
Artist
Harmony Hammond
remembers glimpsing Martin at local parties, where she “never got up and danced,” but still “thoroughly enjoyed herself,” as Princenthal reported. Some friends remembered Martin’s favorite drink as a martini, while others said it was sherry. Martin took many young artists, who made pilgrimages to her home, under her wing, as well—all vibrant instances of the painter’s successful and important bid to “stay in the midst of life.”
Alexxa Gotthardt
Related Stories

Agnes Martin on How to Be an Artist

The Daily Routines of 10 Women Artists, from Joan Mitchell to Diane Arbus 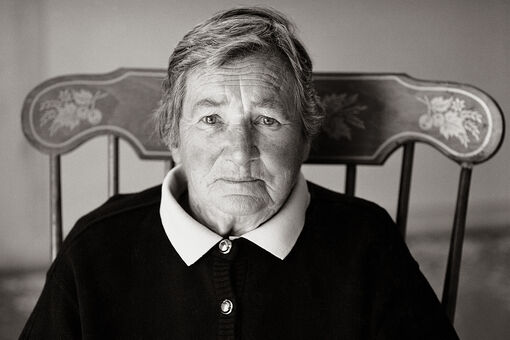 Agnes Martin on How to Be an Artist
Alexxa Gotthardt
Jul 17, 2018 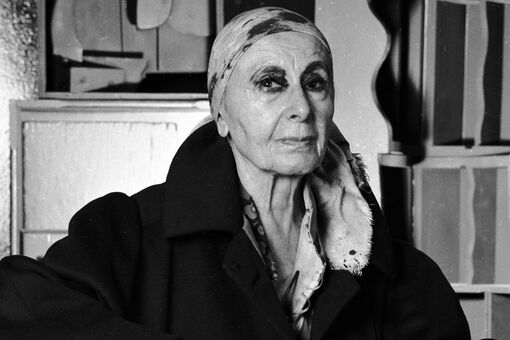 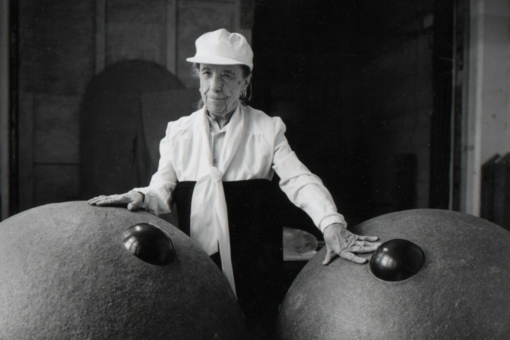 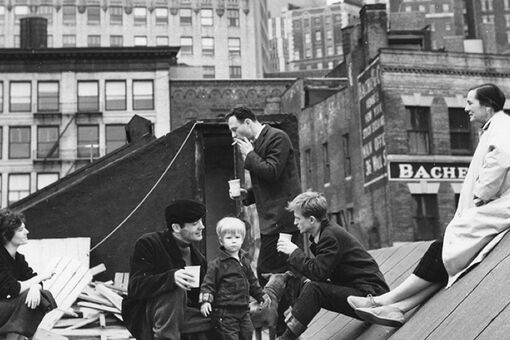