Elusive in Life, Agnes Martin Continues to Evade Her Viewers in Death Head and shoulders portrait of Martin at her house near Cuba, New Mexico, 1974. Photography by Gianfranco Gorgoni, courtesy of Tate Modern

“I’m not a woman,” the American painter
Agnes Martin
(1912–2004) famously remarked in an interview with her friend Jill Johnston, the radical cultural critic for the Village Voice and author of Lesbian Nation: The Feminist Solution. Martin’s quip was both a succinct expression of the misogynistic art world she’d entered into and characteristic of her evasive personality. Though the large-scale square grids and striped canvases she’s best known for sooner recall those of the
Minimalist
Sol LeWitt
than any
Abstract Expressionist
, she thought of her work as belonging to the latter group. She disliked talking about her paintings and methods, was resistant to theorizing about art, and strongly opposed the idea of ego and pride fueling an artist’s motivations. She was also a diagnosed schizophrenic and was hospitalized on more than one occasion.
Yet little of these frictions are evident in the serene but challenging 11-room retrospective of Martin’s work now on view at Tate Modern in London, which will travel to the Los Angeles County Museum of Art and the Guggenheim Museum in New York. The show traces the evolution of her work, a trajectory shaped by Martin’s passage from city to desert, represented in a shift from the artist’s tight pencil grids to her wide horizontal and vertical bands of bleached-out, translucent washes of color. Curated by Frances Morris and Tiffany Bell, the exhibition begins with some of the later works that became Martin’s signature style, before exploring her early experimentations in abstraction. Highlights from among her lesser-known projects include paintings populated with
Miró
-like biomorphic forms and geometric shapes and a fascinating room—what Morris and Bell conceived of as the “laboratory”—given over to Martin’s foray into found objects when she lived in the Coenties Slip neighborhood of New York in the late ’50s and early ’60s. Here, a thick wooden panel adorned with metal bolts resembles a stable door and conjures Martin’s humble beginnings in a rural town in Saskatchewan, Canada. And a row of small, compact grids, fields of short staccato lines, and puzzle-like compositions seem to hum with energy—and lay the foundations for the mathematical, labor-intensive process that would underpin her later large-scale grids.
Like many of her contemporaries, Martin was drawn to Eastern philosophies, and much of her work manifests those influences wholeheartedly. They are meditations on silence and emptiness, ideas that the artist invoked often. “My paintings have neither objects nor space nor time nor anything—no forms. They are light, lightness, about merging, about formlessness, breaking down form,” she said. In her grids of the 1960s, to which the Tate dedicates its fifth room, Martin strived toward something essential in nature. Six-by-six-foot canvases of various shades of white, tan, and granite, with names like The Tree (1964), The Rose, and White Stone (both 1965), are filled only with very faint, intersecting graphite lines. 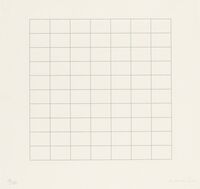 9 Images
View Slideshow
Advertisement
After Martin packed up and left New York in 1967—disappearing for several months just when her career was gaining momentum—she turned up in the New Mexico desert and began an ascetic life in an adobe hut on a mesa, with no electricity. It is here that she hit her stride, largely dissolving the grid and opening up her compositions with pale, watery stripes. If Martin was an Abstract Expressionist, Morris has noted, it was visible in the minute irregularities that she allowed to surface (in Untitled #2, from 2000, a few tiny droplets of peach-colored paint have fallen on a band of mottled sky-blue, evoking the movement of the artist’s arm across the canvas, wet brush in hand), in the gesture with which she painted within the strict confines of her gridded or striped canvases, and in the overarching subject matter—emotion.
Martin penned names for her works that spill into sentimentality, to almost comic effect when paired with her spare and restrained canvases. I Love the Whole World (2000) is a cool 5-by-5-foot composition of white and gray-blue horizontals that belies its effusive title. But her paintings don’t reward this surface reading. In fact, they present a challenge in a museum setting, where viewers must contend with crowds and their own short attention spans. The pieces mysteries lie deep within them and, rather like Martin herself, the viewer must go looking for them. Spend 10 or 15 minutes with “The Islands I–XII” (1979), a series of pristine white squares intersected with pencil lines or bands of faint gray, and their subtle nuances and depths reveal themselves slowly. Notes of duck-egg, bone, and pale sage emerge and recede; fine graphic horizon lines start to pulsate; and the works become magnetic fields of light and motion. 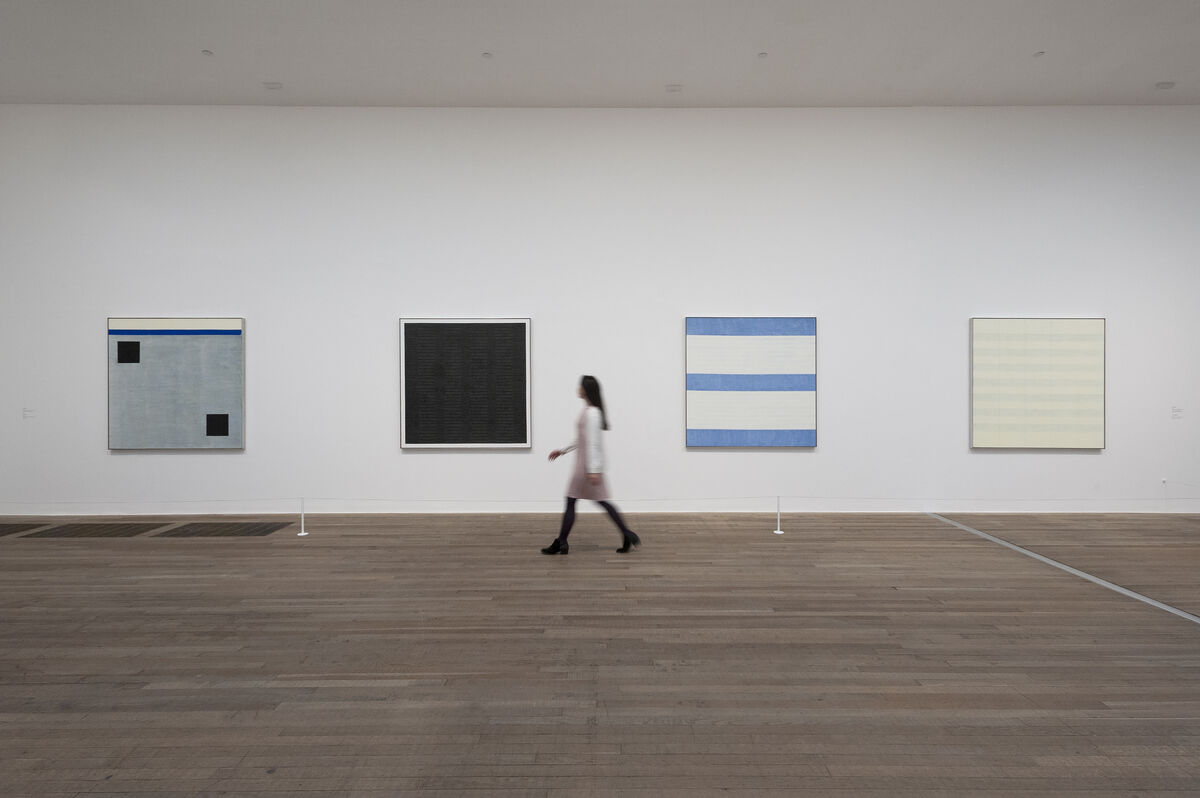 She continued painting from her New Mexico studio until her last days, and the exhibition’s revelatory final room feels like a terminal cry of innocent joy and love. The paintings in there—paired with a handful of works from the ’50s—are less evasive; they reach out to viewers instead of gestating within. The artist revisited earlier compositions and forms during these years, expanding and vitalizing them. Untitled (2004) is another white and gray stripe painting, but its washes are looser, seemingly more hurried, like clouds passing swiftly and purposefully overhead. Several of these pick up on earlier suggestions of Native American motifs and evoke the land. A moving painting titled Homage to Life (2003) is a black trapezoidal mesa form—or void, depending on how you look at it—against a gray field.
Martin had no shortage of hurdles to mount and personal demons to overcome, but she nonetheless pursued the legendary art dealer Betty Parsons—who represented
Rothko
—early in her career and forged a path in the male-dominated, ego-heavy world of mid-century American abstraction. She kept herself to rigorous standards, routinely destroying works that didn’t meet them. She was the driver of her own success but also ambivalent about what that meant—rejecting the notion of artist as celebrity and ultimately withdrawing from the world. This retrospective captures all her complexities, making a case for her as one of the preeminent American painters of her time but also as quite distinct from her contemporaries. In her painterly pursuit of emptiness, Martin is both present—and absent.
Tess Thackara
“Agnes Martin” is on view at Tate Modern, London, June 3–October 11, 2015.
Related Stories