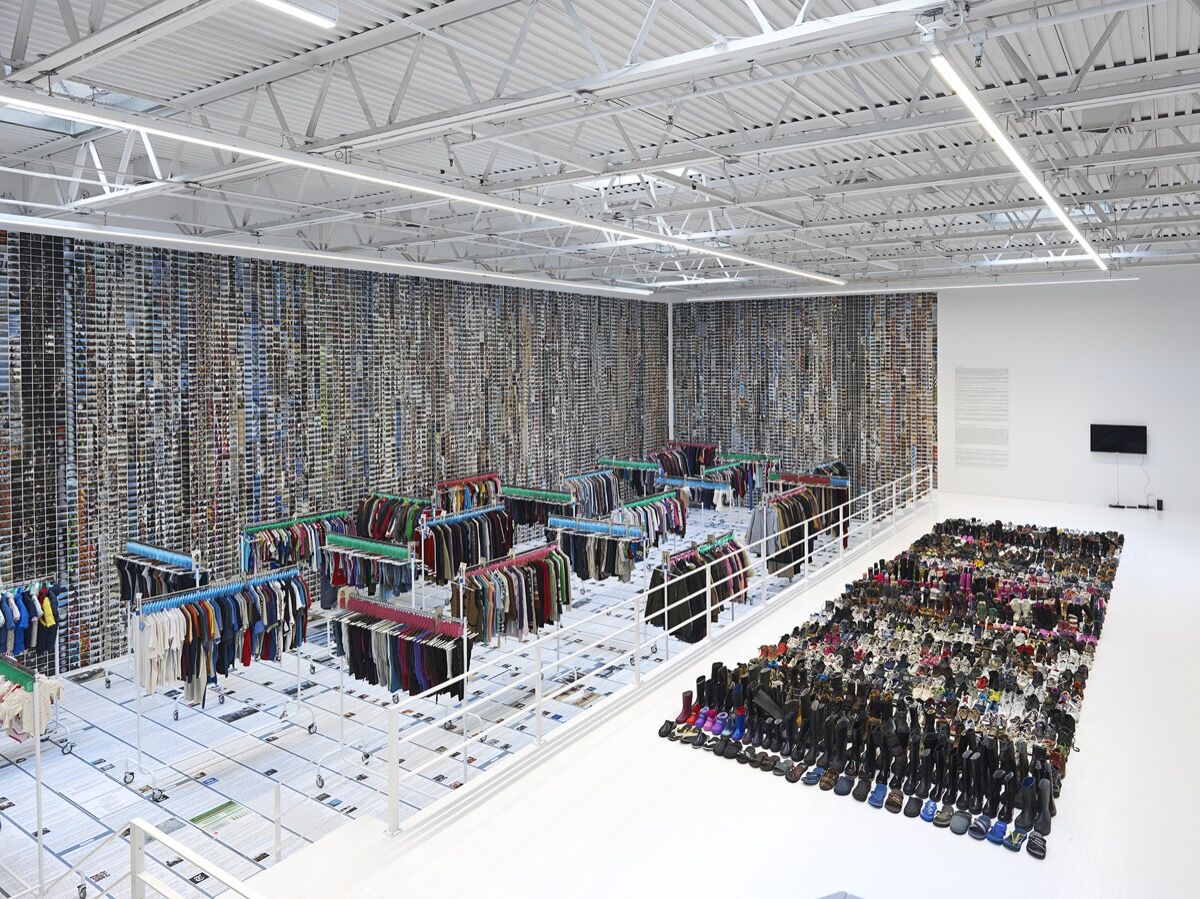 Thousands of articles of clothing, neatly draped from wire hangers on dozens of rolling racks, are arranged across the sprawling main space at Deitch Projects in SoHo. The taxonomy is labeled and sorted by category and size: One rack brims with tiny, child-sized jackets; one with men’s briefs and boxers; another with vests, blouses, and pullovers. On an adjacent, raised platform, tight rows of shoes form a narrow rectangle. Were it not for the fact that some shoes are missing their match, this could have been the contents of a secondhand clothing store. In reality, it’s all clothing left behind after the forced evacuation of the Idomeni refugee camp, on the border of Greece and Macedonia. Now, it’s the crux of “The Laundromat,” the most ambitious of four new
Ai Weiwei
shows that opened simultaneously last week in New York.
Ahead of the shows’ openings last Saturday, the Chinese artist, who is now based in Berlin and Beijing, took the stage of a crowded auditorium at the Brooklyn Museum—his only public speaking appearance during his stay in New York. Tensions ran high when his interviewer, artist
Tania Bruguera
, turned the room’s attention to a photograph released earlier this year, picturing Ai lying face down on a beach off the Greek island of Lesbos. The photo—which mimicked the indelible image of a drowned three-year-old Syrian child named Alan Kurdi, who became emblematic of the Syrian refugee crisis in September 2015—had sent ripples of controversy across news outlets and social media after many deemed it to be crass.
“I’m an artist, I’m not a priest,” Ai told the crowd, his voice booming, in response to the critical reactions. “I raise questions, I put myself into those questions, and if I [didn’t] care like everyone else, I would have never become an artist.” According to Ai, there are much worse images out there in the world, and besides, he says, he’s immune to the critics: “I don’t give a damn shit about it.”
Instead, he directed the conversation to an issue that’s extremely close to his heart, the 3,800 refugees who died in the Mediterranean this year, as well as the work he has done over the past several years to research and address the refugee crisis in his practice. “To talk about this topic,” he told Bruguera, “I will be too emotional even to answer on this stage.” 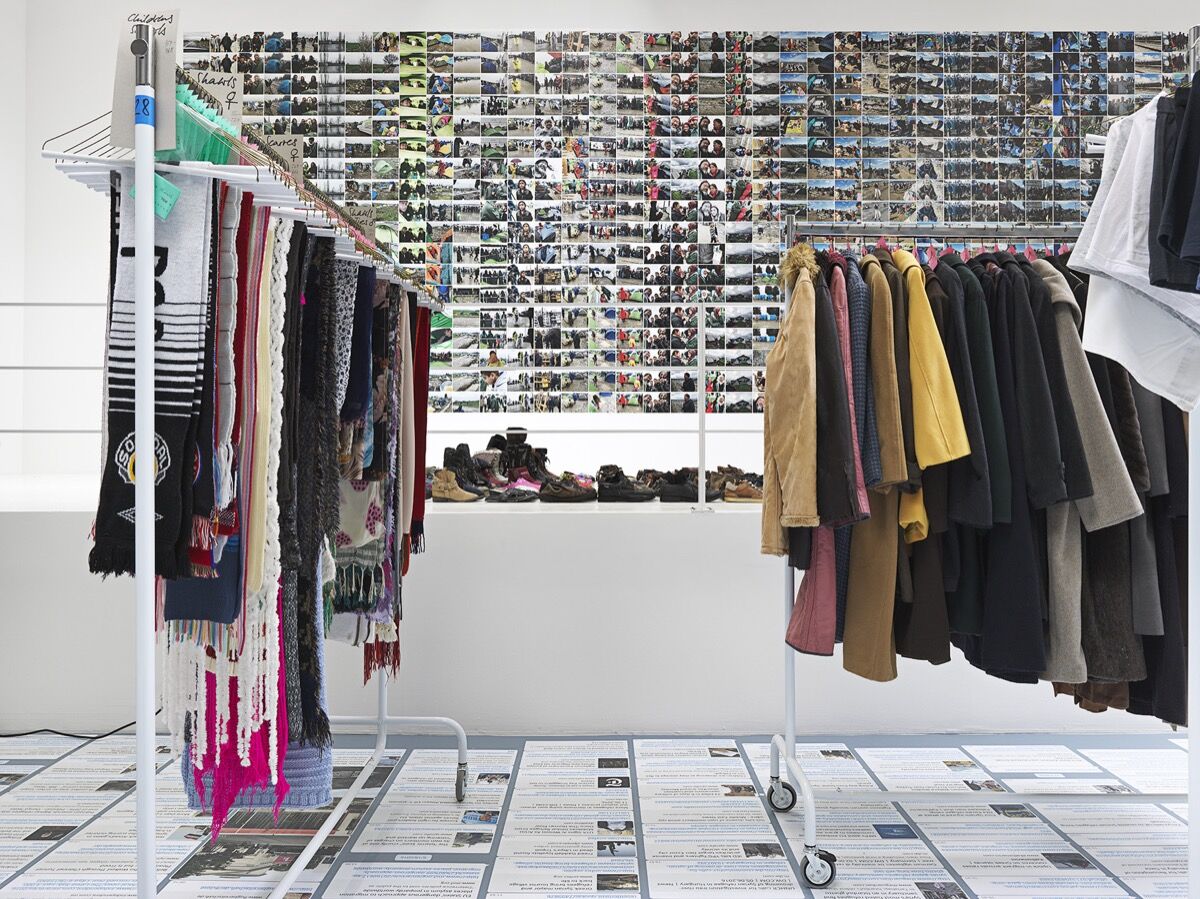 Emotionally loaded topics, at times pertaining to the plight of children, are a forté for Ai (who has a seven-year-old son). In 2009, for example, in tribute to the thousands of children who died in the Sichuan earthquake the year before, he famously covered Munich’s Haus der Kunst in 9,000 kid-sized backpacks. In 2011, his fierce criticism of the Chinese government—begun after the 2008 Olympic Games and distributed thereafter through his hyperactive social media channels and exhibitions all over the world—culminated during a major crackdown of dissidents and the confiscation of his passport. While forced to remain in China that same year, he began the work with refugees that has now become the crux of his practice. His first project, for the 56th Venice Biennale with the Ruya Foundation, was a show of drawings created by refugees from the Shariya camp in Iraq (himself unable to visit, he sent assistants there to work with the people).
Spurred in part by his own experience as a child refugee—his family was exiled from Beijing to a remote labor camp because his father was considered “rightist”—Ai continued to pursue the subject even after his passport was returned in 2015. Moving to Berlin that July, he met with Syrian refugees there and was inspired to delve deeper into their stories, often by traveling to personally meet the people being affected. Last Saturday at the Brooklyn Museum, he told the crowd he has now taken over 1,000 hours of footage, which will form a documentary to be released next year. He has also interviewed over 100 politicians and visited refugees in several countries where the situation is dire.
“The Laundromat” gives great exposure to the work Ai has done in recent months to research, document, and experience the refugee crisis, specifically at Idomeni. During a press preview of the show on Friday, Ai was present, solemnly addressing visitors and urging them to watch the film at the back of the space, which dutifully visualizes the show’s harrowing backstory. In footage from the time Ai and his team spent embedded at Idomeni, we see children crying and people living in countless small, flimsy tents, surviving terrible conditions and violence. People push against border police and are met with tear gas; ultimately, an exodus of men, women, and children leave the camp after the government forces their departure. After shots of bulldozers demolishing rows of tents, pushing aside the belongings the refugees could not carry, the film cuts to Ai’s studio in Berlin, filled with piles of clothing collected from the abandoned site. His team negotiated with local officials to keep thousands of articles of clothing and blankets that were left behind, soiled from the difficult journey to Idomeni. We see the artist and his team washing the clothes, hanging them to dry across the cavernous studio, carefully ironing each piece flat, and devising a system of organization. Sneakers and sandals are scrubbed clean with brushes in buckets of soapy water. In the surrounding space, the walls and floors of Deitch Projects are also activated, plastered with printouts from The Newsfeed, the artist’s WeChat channel that he shares with collaborators as a central space to collate new findings, images, and articles pertaining to the refugee crisis. 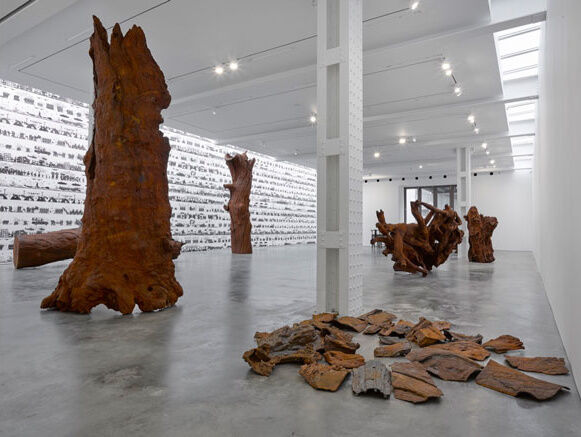 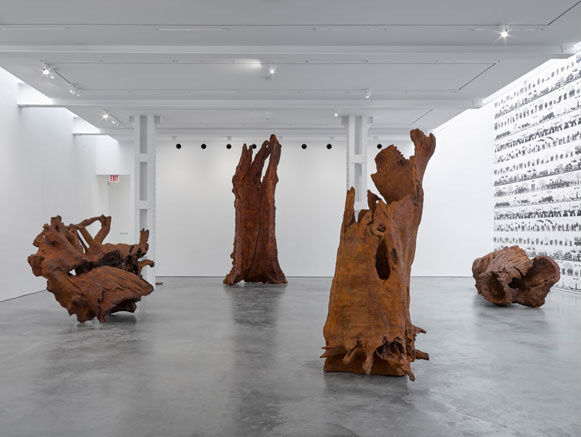 Advertisement
Despite their coinciding timelines, the concurrent shows at Mary Boone and Lisson are largely disconnected. It’s in these shows that viewers will find the work we’ve come to expect from Ai—ambitious, impeccably executed sculpture, and themes pertaining to nature and Chinese craft traditions, with shocks of criticism. At Lisson, nine large-scale iron casts of tree trunks punctuate the airy white cube, preserving the Asian spiritual tradition of collecting dry fragments of trees. The same tradition is present at Mary Boone’s space down the block on 24th Street, in a room papered with kaleidoscopic motifs made up of shiny gold surveillance cameras, where a 25-foot-tall tree looms. The work, which previously stood in Ai’s garden at his Beijing studio, consists of fragments of dead trees found in Southern China. These whole tree forms, made from many distinct parts, may signal the manifold ethnicities that make up modern-day China, or a hopeful gesture toward a strong, united future built from the ashes.
What feels more in line with the Idomeni installation, though, is the black-and-white wallpaper that covers the gallery’s western wall at Lisson. Recalling the style of Ancient Greek friezes and amphora designs, the wallpaper features repeating bands that depict detailed scenes of warfare and the refugee crisis: people in camps with signs on chain-link fences that read “#safepassage,” “no one is illegal,” and “open the border”; lines of men marching with machines guns; women and children carrying their belongings in sacks on their heads; overcrowded boats sailing through choppy waters; helicopters hovering over a shell of a town.
At Mary Boone’s uptown space, the main room is wallpapered with one of the same elements found downtown at Lisson—that of an amputated arm giving the middle finger. The dismembered limb is reflected in the central work, an installation of 40,000 porcelain spouts from antique Chinese teapots, which, effectively stripped of their function, have been scattered meticulously in a perfect ring around a central column. The middle finger gesture is not a new one for Ai, who for years has circulated his “Study of Perspective” series (1995–2003) in which he gives the middle finger to politically potent sites such as Tiananmen Square, the Reichstag building, the Eiffel Tower, and the White House. This past Saturday, Bruguera mentioned the White House image, to which Ai remarked, “Now I have even more reason to do this.” Days later, Ai revived the gesture for his 264,000 Instagram followers, directing his middle finger at Trump Tower just a week before the U.S. presidential election. 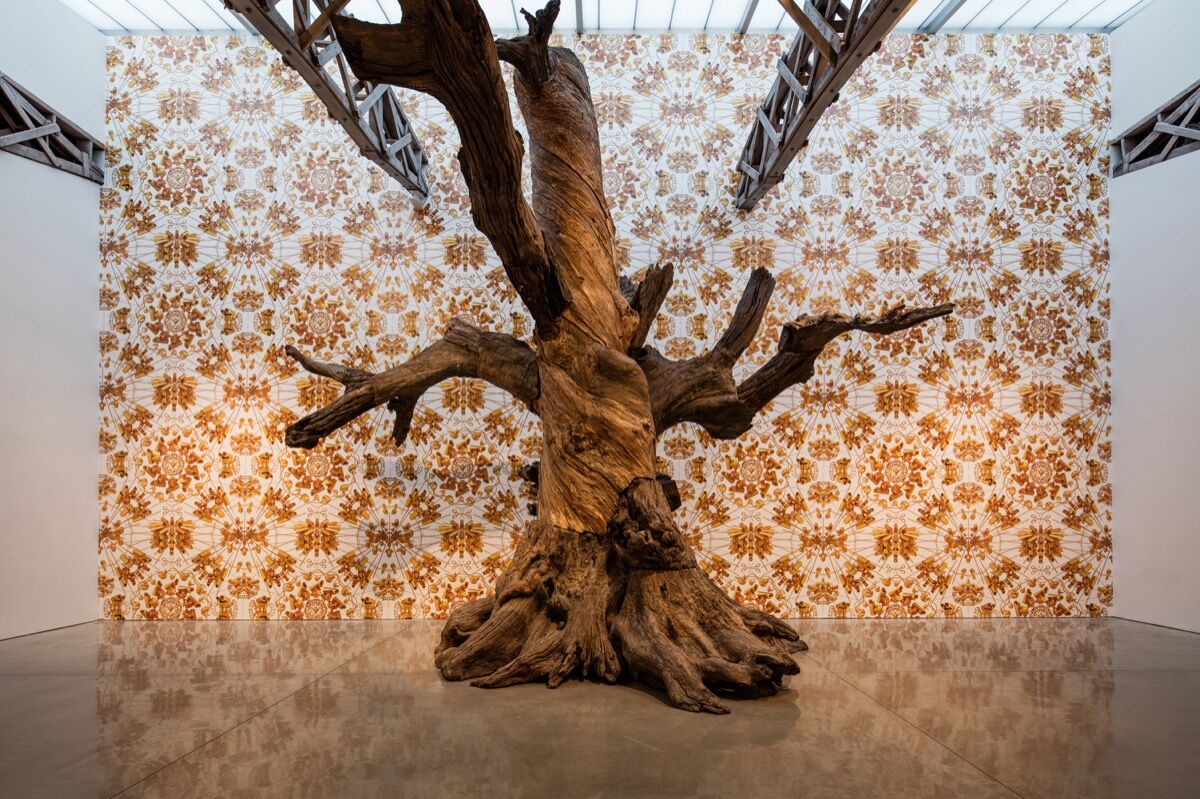 We’ve come to count on this behavior from Ai. It’s this steady stream of irreverence and government criticism that has earned him a reputation as a “dissident artist,” or perhaps the most powerful living political artist. But Ai isn’t so fond of the latter title. “I never call myself a political artist; somebody calls me that. I think it’s an insult, but I accept it,” he said at the Brooklyn Museum. “Every art has to be political. If it’s not political, it’s not art.” Political messages are a constant across all four shows, but it’s at “Laundromat” where Ai’s activist work is most palpable. In this non-selling show, rather than symbolic fuck-yous or surveillance cameras, we find the belongings of real people—the physical evidence of their itinerant struggles—treated like precious artworks. It’s in this show that we’re reminded of Ai’s unwavering ability to use art as a means of activism, driving attention to political issues in a way that words and actions cannot.
Casey Lesser is Artsy’s Lead Editor, Contemporary Art and Creativity.
Related Stories