What Alfonso Cuarón’s “Roma” Could Have Learned from Art History 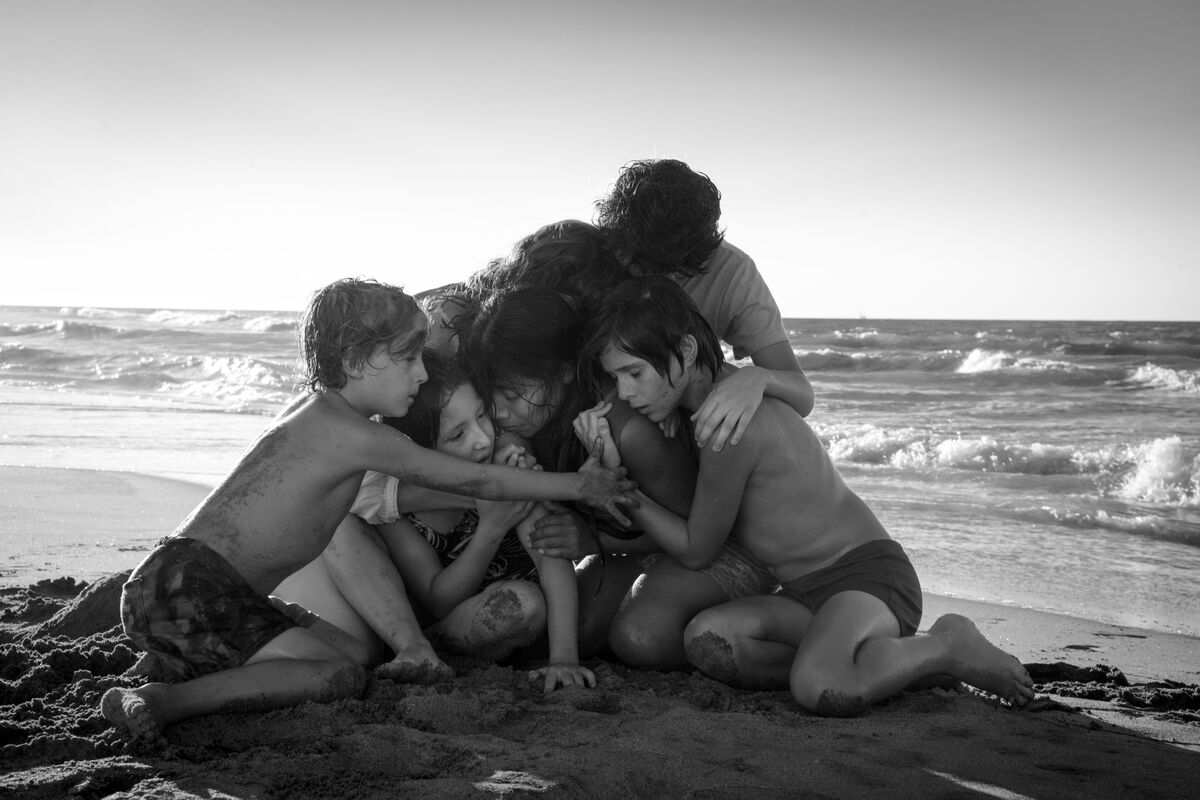 At first glance, two of this year’s Oscar-nominated films, The Favourite and Roma, have little in common. In the former—an amalgamation of English palace intrigue, dark humor, and vibrant costumes—Olivia Colman gives a stunning performance as the fickle Queen Anne, while Emma Stone plays Abigail, her conniving servant. Roma, on the other hand, is a serious and methodical domestic story, raised to an epic scale, about a family in Mexico City and their maid, Cleo (played by Yalitza Aparicio). Nevertheless, the pair of movies, directed by Yorgos Lanthimos and Alfonso Cuarón, respectively, share an important theme: They’re both, at their core, about the hired help.
History is full of male painters, writers, and filmmakers who have tackled the subject of women working for their own aesthetic and political aims. Portrayals of workers often suggest a larger economic message, advocating a more equitable society; it’s difficult to discuss such characters without thinking about class. From
Henri de Toulouse-Lautrec
, whose portrait The Laundry Worker (1884–88) features a woman staring wistfully out a window, to J. Howard Miller, who created the iconic Rosie the Riveter poster, international artists and designers have tried to make the motif feel striking and new. Ultimately, while Lanthimos’s work is a surprising and rewarding entry into the canon, Cuarón’s falls short as he relies on tired tropes. 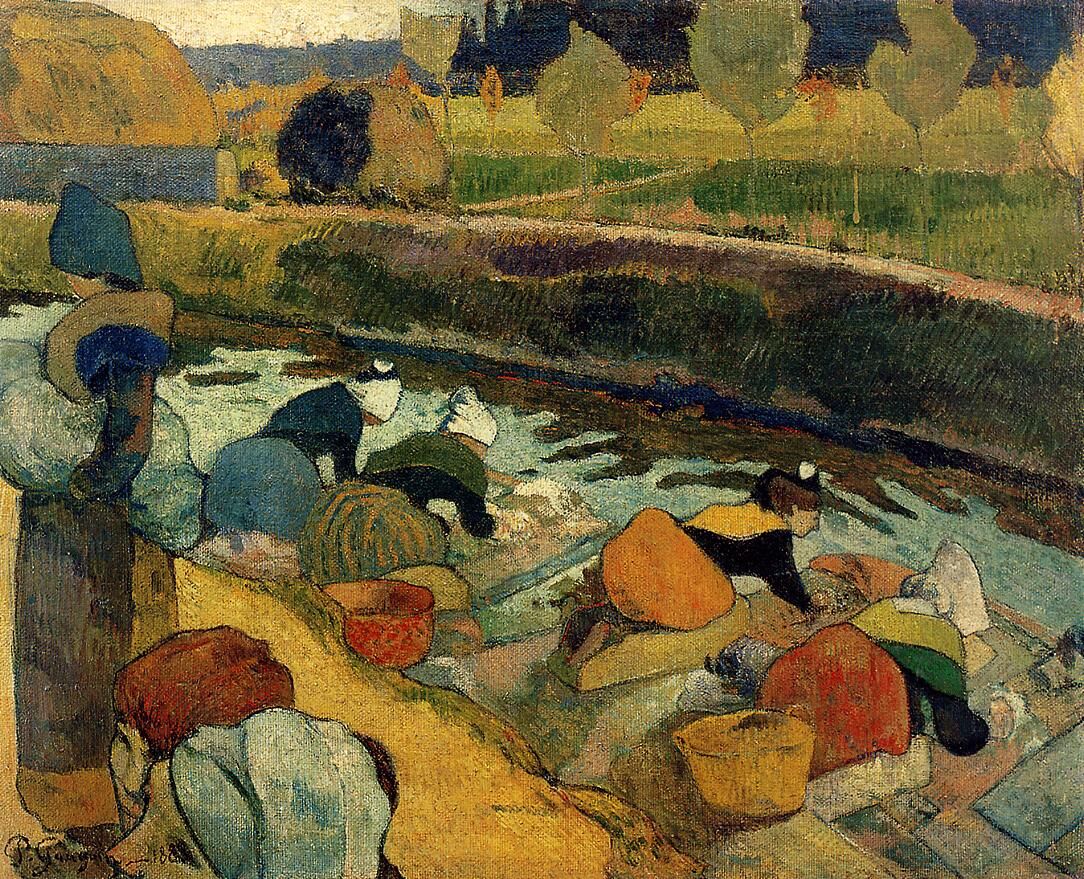 From a moral standpoint, Roma’s Cleo is a much better person than Lanthimos’s Abigail. Cleo dutifully serves her mistress, Sra. Sofía, going so far as to risk her own life to save the woman’s children from drowning in the ocean. Besides an early moment of gentle rebellion, when Cleo and her cleaning companion, Adela, laugh about their employers’ idiosyncrasies, she is unflinchingly loyal, never expressing anger, frustration, envy, or resentment. Even when her boyfriend, Fermín, impregnates and then abandons her, she remains calm. The film glorifies this approach to life. Cuarón’s camerawork nearly shouts: “Look at her fortitude! Her goodness! Her total inability to make petty complaints!” Like
Paul Gauguin
’s Washerwomen at the Roubine du Roi Arles (1888), which reduces faceless, working female figures to bulging shapes and vehicles for blocky color, Cuarón’s film diminishes Cleo’s individuality, in service of the work’s larger ideas.
Under a lesser director, The Favourite’s Abigail could have fallen prey to an alternate stereotype. She sleeps her way into power as she initiates a sexual liaison with the queen, then marries her way into respectability as she weds a baron. But she’s no worse than anyone else in her universe, where cleverness reigns and loyalty is for suckers. 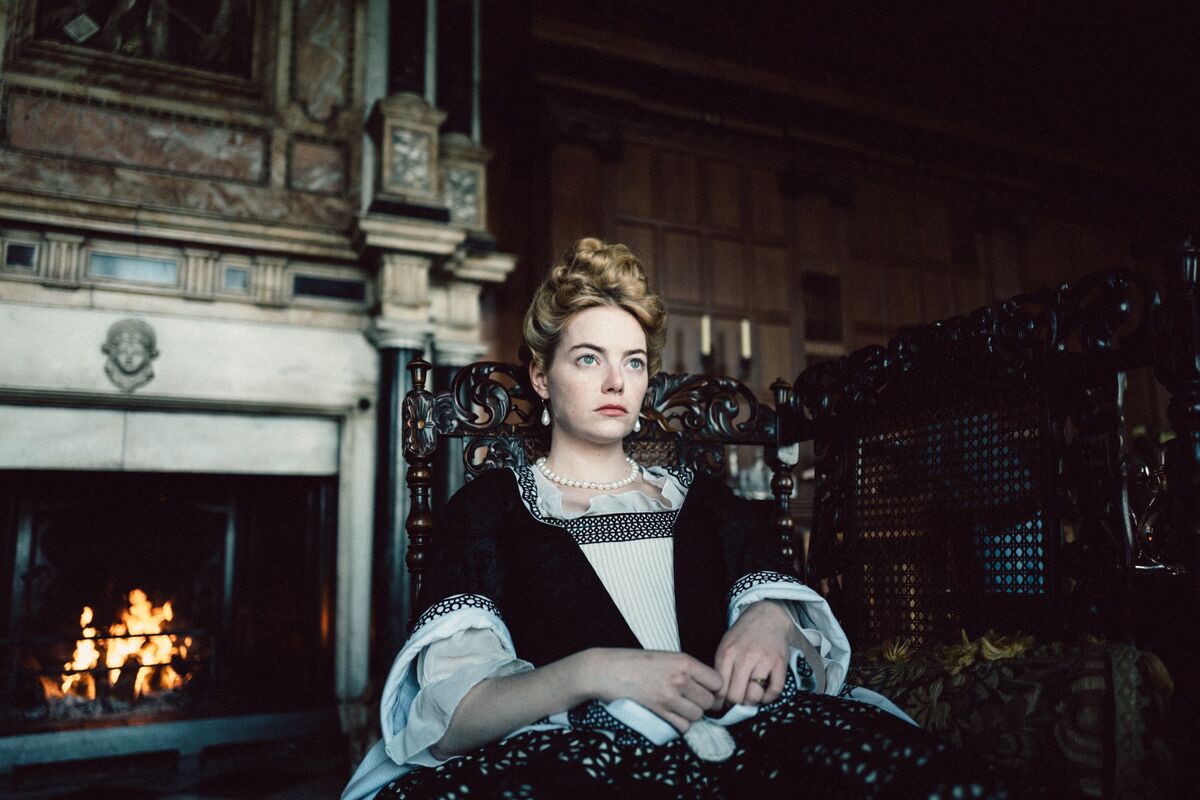 Still from The Favourite, 2018. Courtesy of Fox Searchlight Pictures.

Advertisement
Lanthimos drives the plot forward through Abigail’s sharply articulated desires, but under Cuarón’s direction, Cleo hardly seems to want anything. In a moment that’s supposed to feel like a revelation, after her baby is delivered stillborn, we learn that she didn’t wish to bear her child after all. In the end, we’re only left with a sense of what Cleo doesn’t want, which weakens both the character development and the larger narrative.
Richard Brody, a film critic at The New Yorker, has already scolded Cuarón for his failure of imagination. “Watching Roma,” he writes, “one awaits such illuminating details about Cleo’s life outside of her employer’s family, and such a generously forthcoming and personal relationship between Cleo and the children in her care. There’s nothing of this sort in the movie; Cleo hardly speaks more than a sentence or two at a time and says nothing at all about life in her village, her childhood, her family.” Though Brody’s sentiment is sound, it’s not just Cleo’s backstory we’re missing, but her entire personality. Even painters have been able to achieve a more significant sense of interiority with mere brushstrokes. In
Edgar Degas
’s Women Ironing (ca. 1884–86), for example, a woman’s open-mouthed yawn becomes a highly specific moment of vulnerability, a character-defining action that easily generates a larger personal story in the mind of the imaginative viewer. 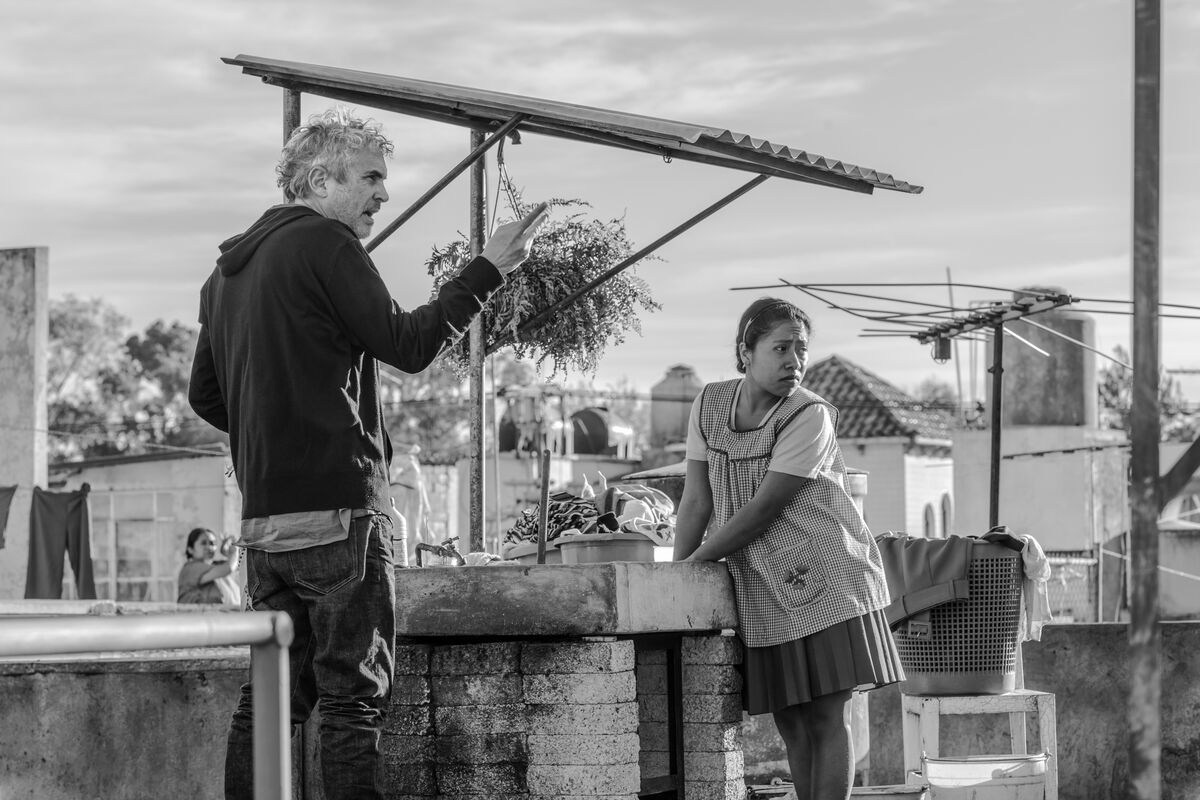 Image from the set of Roma, 2018. Courtesy of Netflix.

Though we also learn little about Abigail’s background, Lanthimos clearly sketches her indomitable will to power, skillfully creating a larger web of intrigue. Given the complexity of its female characters, it’s no surprise that The Favourite was co-written by a woman, Deborah Davis, who, last fall, told the Los Angeles Times: “It was the first example in English history where we see not only women in power but wielding power.” Lanthimos himself told the paper: “I saw this opportunity of creating these very complex female characters that you rarely see onscreen. It was a period piece, but at the same time it also felt so relevant to today.”
But when Cuarón speaks about Roma, the director discusses his impulses as purely personal—his affection for his own childhood nanny, Libo, motivated him to make film. So it’s strange that he demonstrates more love for the formal elements of his craft than for her character. If it’s a gorgeous movie to watch (and to listen to—the sound editing is lovely), it can also feel hollow. Bound too closely to reality, perhaps, Cleo ironically feels less real. 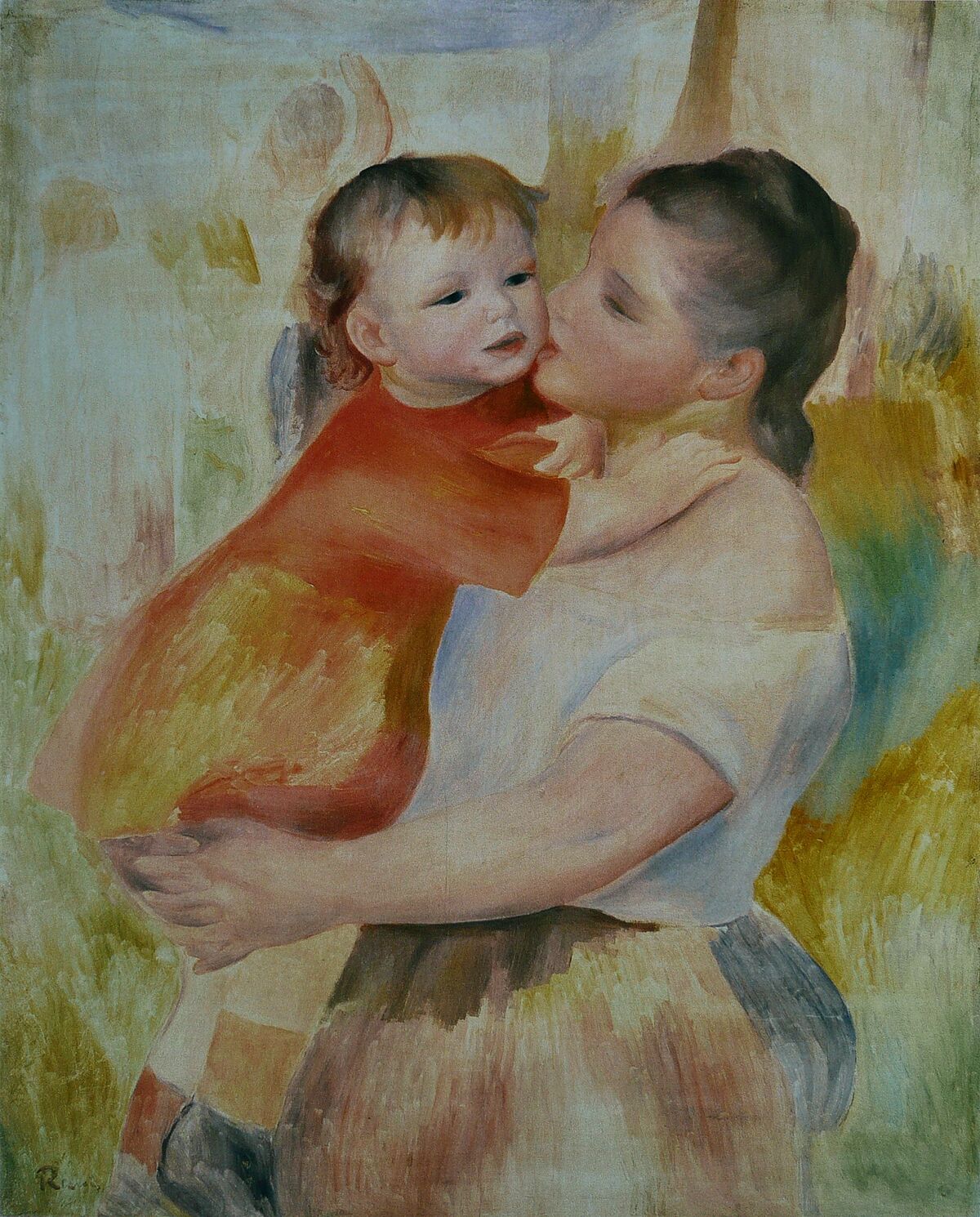 In Lanthimos’s tale, Abigail’s character transcends her title. She’s not just a domestic servant, but a person vying for power. Anyone with a twinge of inner nastiness (all of us, I’d argue) can relate. Cleo, on the other hand, never becomes more than the family’s maid: Her individuality is always subservient to her role. It’s difficult to empathize with such pure characters, mostly because they don’t actually exist. While we can sympathize with the sacrifices she has made, it’s harder to get swept up in her story.
Like a Communist propaganda poster, but less sharp-edged, Roma idealizes the working class, Cleo becoming a mere stand-in for why we should pay more attention to those less fortunate. A more distinctive portrait of a working woman, albeit in a different format, is
Pablo Picasso
’s Blue Period painting Woman Ironing (1904). In the work, an angular woman bends over a table, pressing an iron onto a rippling surface. Her eyes are shadowy, her hair tendrils delicate. It’s a moving picture, brimming with the sense of her individual spirit. When he created the picture, Picasso was an impoverished artist himself. Recently, the Guggenheim’s research team discovered that beneath the surface, Picasso had first sketched a man. To create such an evocative picture, perhaps, he had to see a bit of himself in his subject first.
Alina Cohen
Related Stories