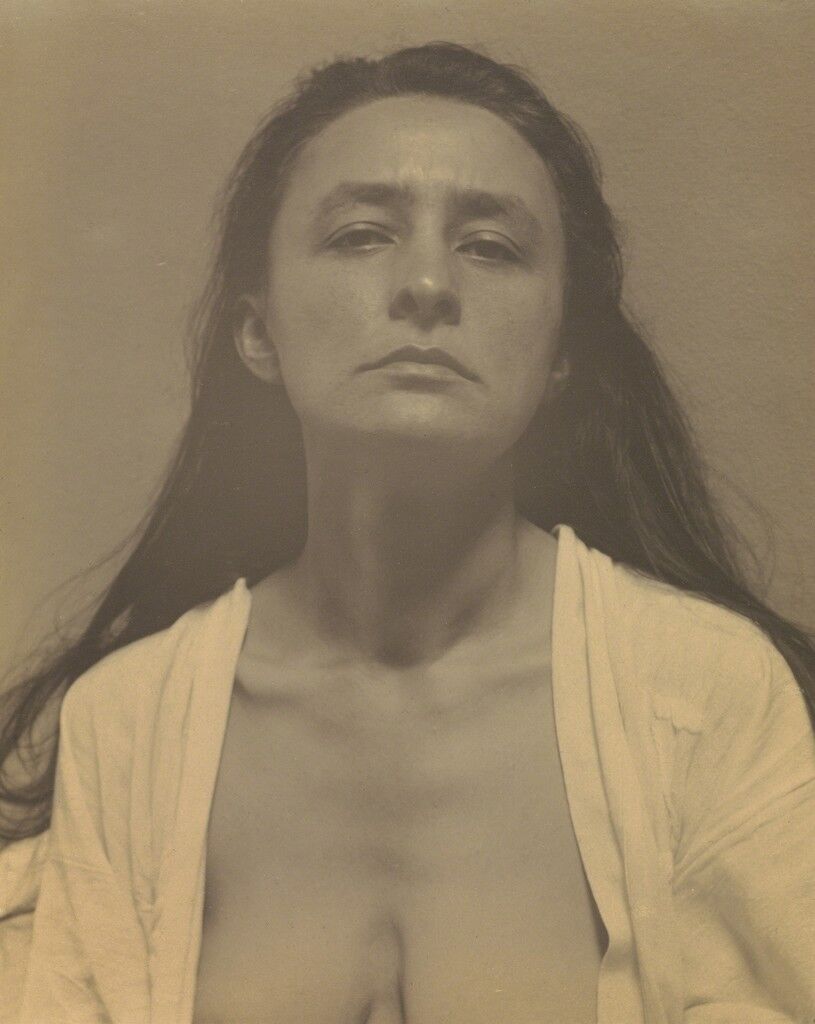 Alfred Stieglitz
Georgia O’Keeffe, 1918
"Georgia O'Keeffe" at Tate Modern, London
Georgia O’Keeffe
’s introduction to the art world wasn’t through her now-iconic paintings of flowers and desert landscapes—but through another artist’s photographs of her nude body. In the winter of 1921,
Alfred Stieglitz
mounted his erotic pictures of O’Keeffe at New York’s Anderson Galleries, with her bare breasts, thin torso, and expressive hands on view.
“Photographs marked by such intimacy had never been seen in public. They seemed to tell a story tracing the growth of the couple’s affection,” writes Carolyn Burke in her new book, Foursome (2019),which traces the complex relationships between Stieglitz and O’Keeffe, as well as artist couple Rebecca Salsbury and
Paul Strand
. Though Stieglitz’s photographs found a welcome audience with male viewers—some of whom even asked Stieglitz to photograph their wives—critics’ appraisals were split: The pictures were obscene or groundbreaking, primitive or ingeniously refined. The series inspired Strand, a young photographer at the time, to capture his own lover, Salsbury, on film; the two couples were romantically and aesthetically intertwined over the subsequent decades.
A century later, Stieglitz’s pictures remain nuanced depictions of the relationship between artist and muse. But they also expose the vulnerability of one of America’s most famous painters as she was just discovering her own talent.
On January 1, 1916, Stieglitz’s 52nd birthday, the artist received 28-year-old O’Keeffe’s charcoal drawings at his Manhattan gallery, 291. O’Keeffe, who was an art teacher at Columbia College in South Carolina at the time, demonstrated significant ambition by enlisting her friend, photographer Anita Pollitzer, to bring the drawings to the gallery for review—it was a bold move for an unknown artist to present unsolicited work straight to Stieglitz himself. 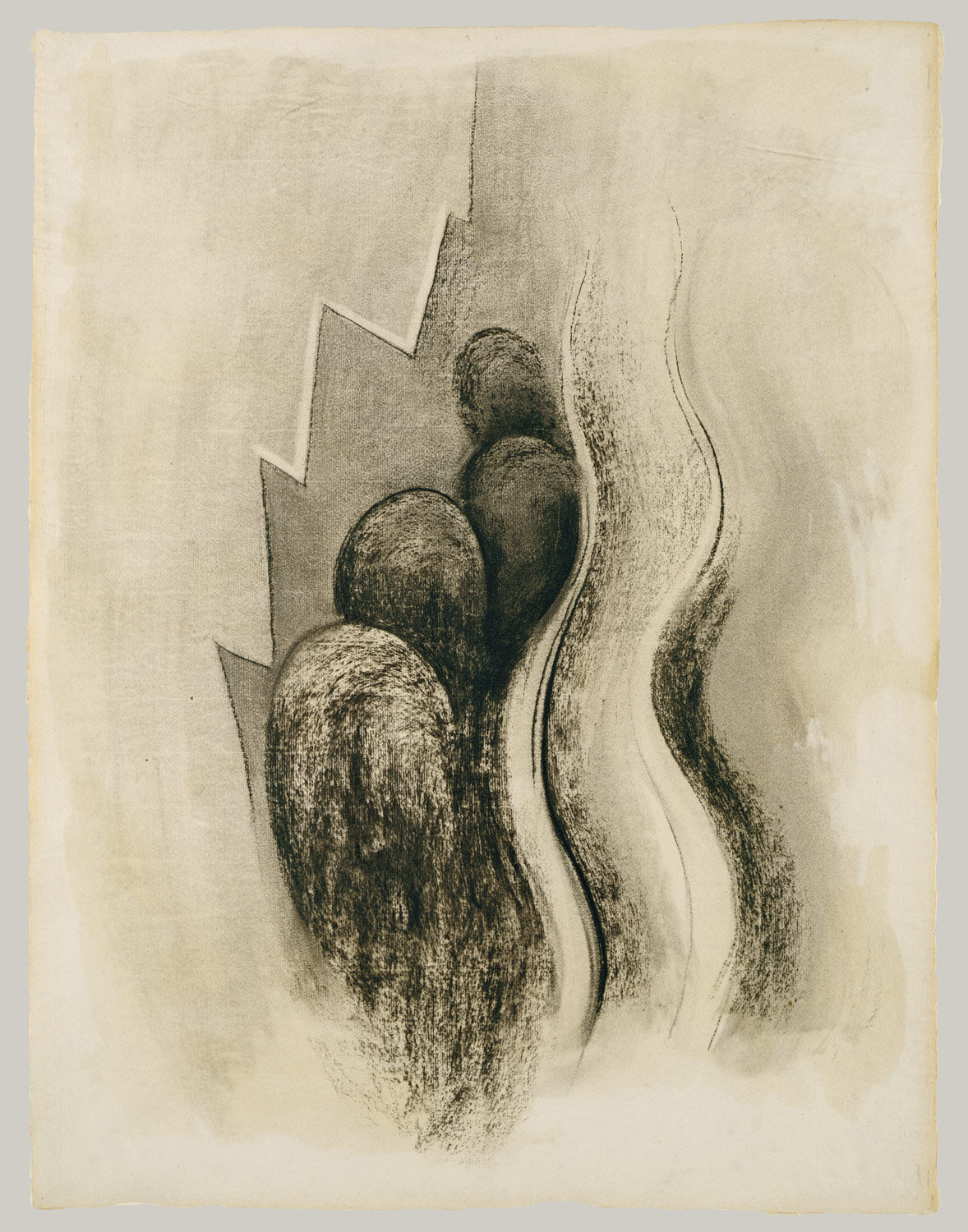 Advertisement
Before they ever met in person, the eroticism of art itself was integral to the pair’s relationship. From the beginning, Stieglitz adored O’Keeffe’s sensual charcoal lines, forming simple compositions in ripples, swirls, and folds. “They are as if I saw a part of myself,” he proclaimed. Later, his photographs of her resonated with those works. The gentle curves and biomorphic forms in her early, pared-down charcoals find their echoes in his close-up shots of her dark, flowing hair; the shadows along her neck; and slope of her breasts.
Yet from the start, inequities plagued their relationship. In the spring, Stieglitz debuted O’Keeffe’s work without her permission. When O’Keeffe found out, she showed up at 291 and demanded he remove her work from his walls. To pacify her, Stieglitz took her to lunch, and O’Keeffe relented. Despite her romance with political scientist Arthur MacMahon, she began a prolific correspondence with Stieglitz; they would exchange 25,000 pages of letters over the course of their relationship.
Stieglitz himself was married to brewery heiress Emmeline Obermeyer, though he continued to pursue O’Keeffe after she moved to Texas (letters from the time show that she continued to write to MacMahon, as well). O’Keeffe and Strand—united by their status as Stieglitz protégés—were also becoming cozy. Stieglitz even financed a trip for the pair to journey to San Antonio together, where they made art and took walks in town. O’Keeffe even contemplated living with Strand, but she ultimately found the young photographer helpless and exasperating. 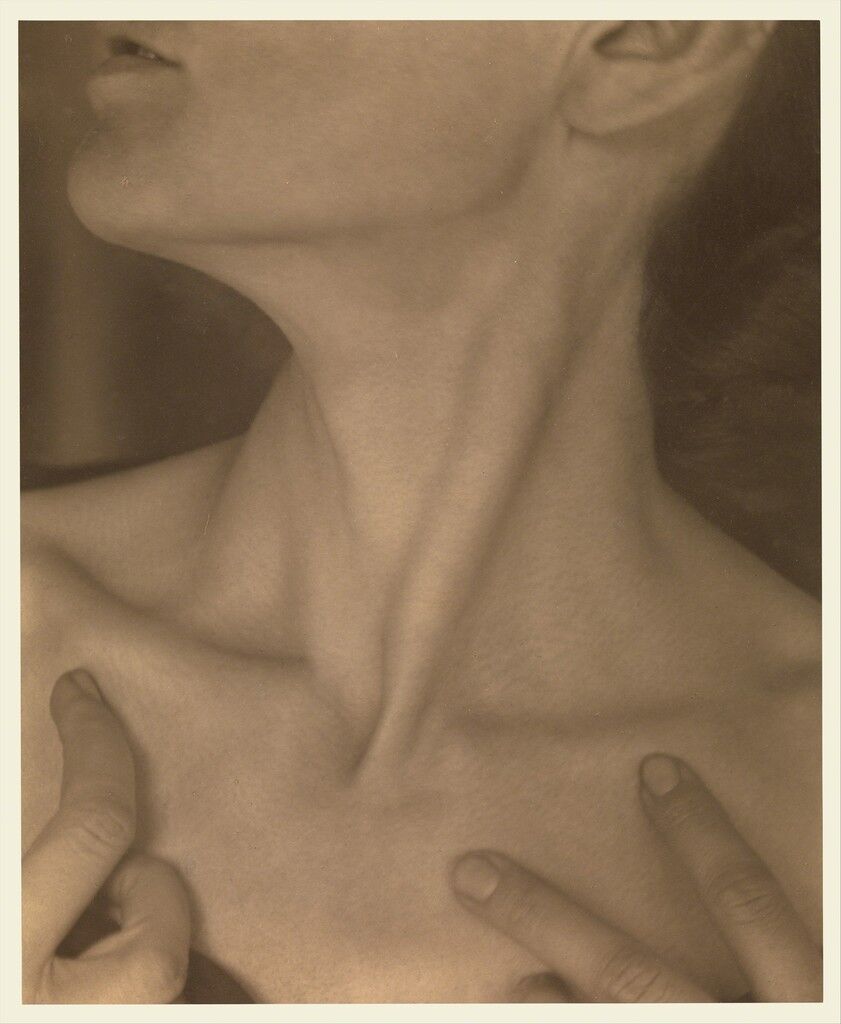 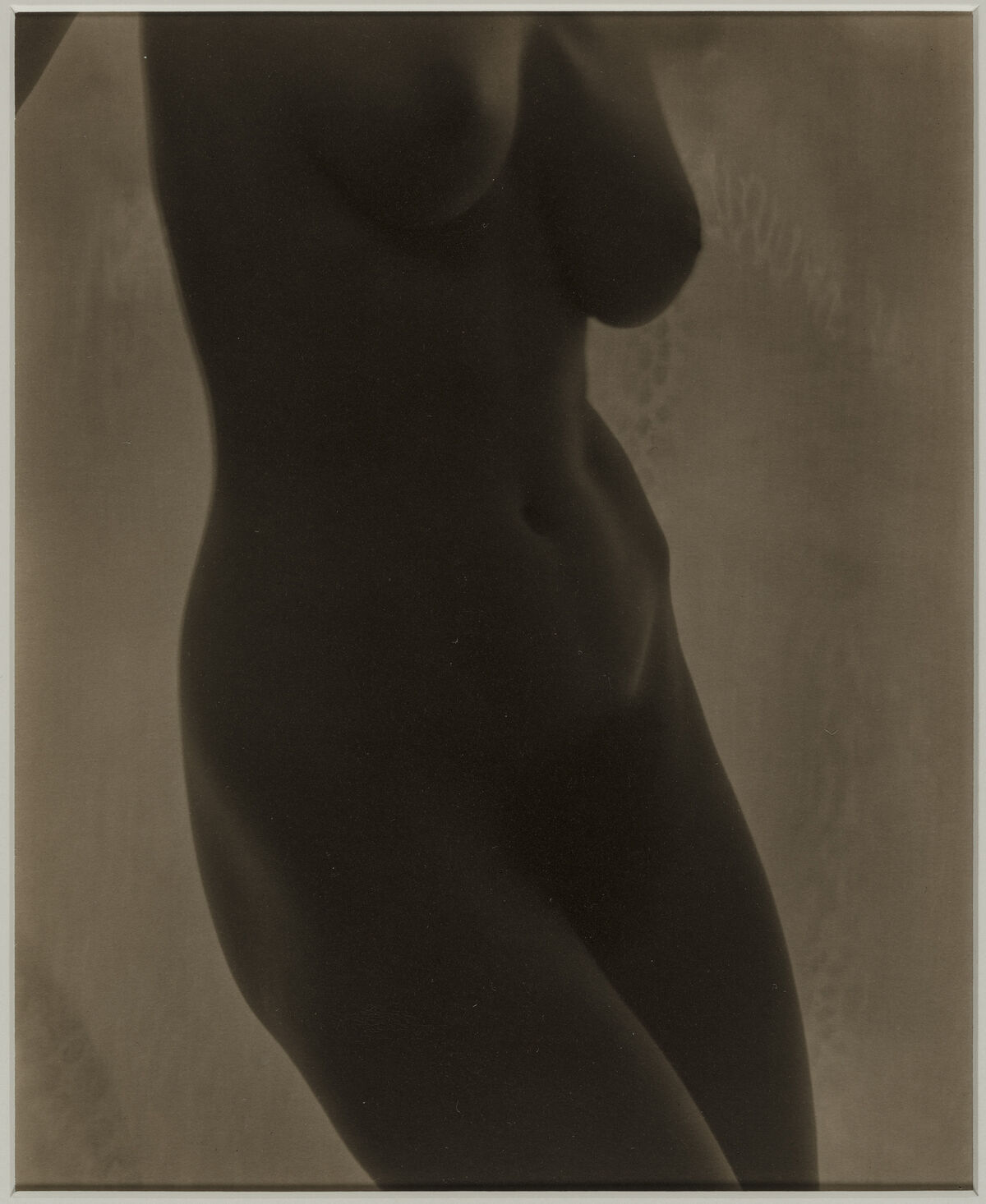 More than anything, O’Keeffe wanted the freedom to paint. In June 1918, suffering a strange illness, she left the Southwest for New York and moved into an apartment with Stieglitz. “Alfred spent each day at the studio, thrilled to be the guardian of his dream woman, whose frail health made her dependent on him,” Burke writes. A lopsided, complex power dynamic was evolving. Stieglitz, who was already O’Keeffe’s businessman, was now also her caretaker and hotelier.
By all accounts, however, O’Keeffe was as enthusiastic about Stieglitz as he was about her. While living with him, she painted in the nude, then quite willingly became Stieglitz’s model. Yet according to Burke, the pair didn’t consummate their relationship for months: Stieglitz was married, and O’Keeffe was still frail. “During this time, Stieglitz took possession of his beloved with his camera,” Burke writes. The pictures, then, reveal as much of what did take place between the two—intimacy, trust, gazing—as what didn’t: sex itself. Sexual frustration proved fruitful for both their artistic endeavors. 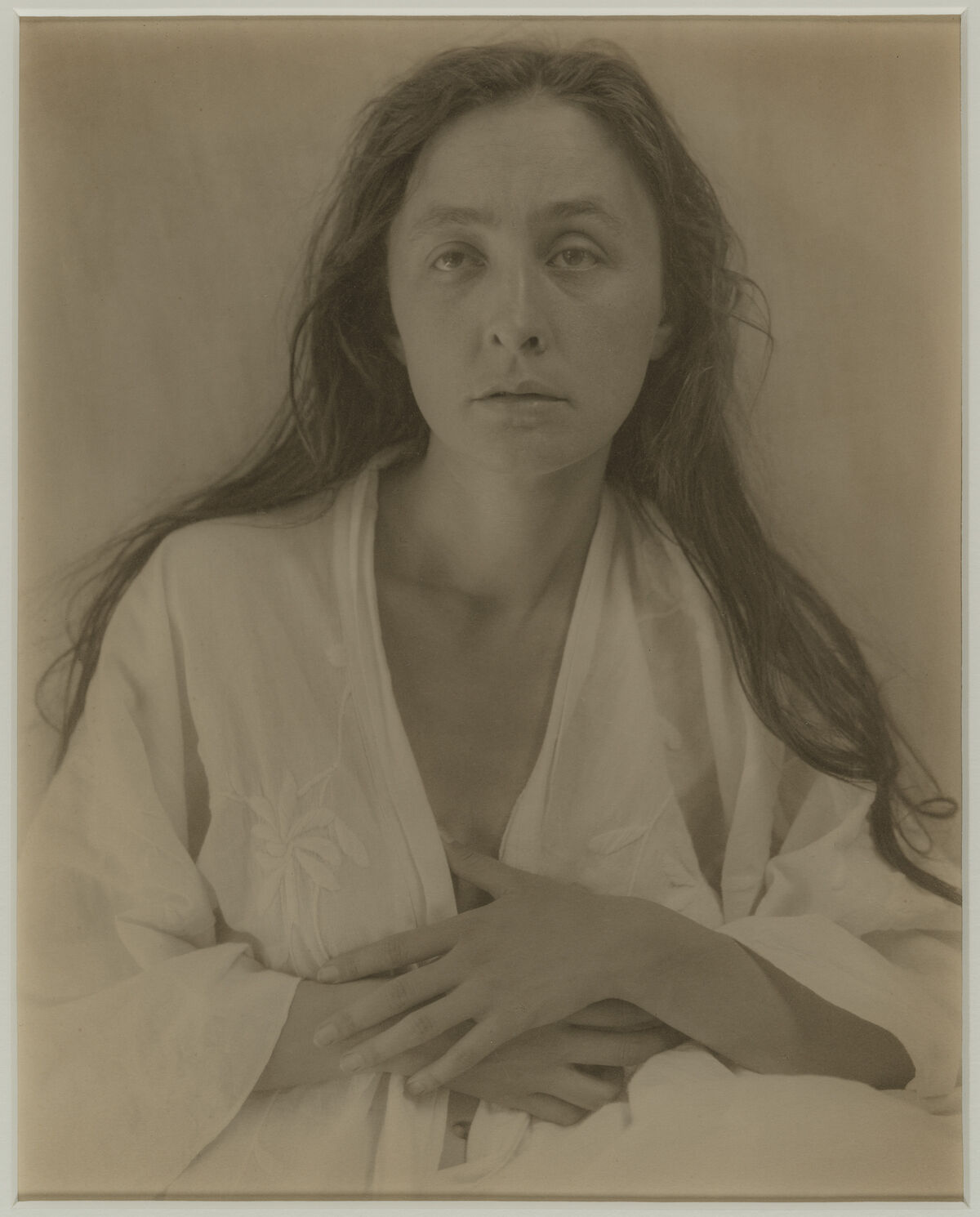 In August, the pair finally began a physical relationship, shortly after Stieglitz left his wife. They frequently socialized with Strand and Salsbury, who married in 1922. That year, Stieglitz turned his lens on Salsbury’s nude body, with reverberations of his earlier shots of O’Keeffe. One picture features Salsbury cupping one hand around her breast, her torso submerged in water; another captures her face, mouth open, as though in prayer, gazing up toward the light. While the photographs demonstrate the lust evident in Stieglitz’s earlier series, they lack the grace, simplicity, and softness of his O’Keeffe pictures.
Despite its beauty, Stieglitz’s series on O’Keeffe had thorny motives. “I’ll make you fall in love with yourself,” he wrote to the artist, explaining why he wanted to photograph her—a sentiment both romantic and commanding. 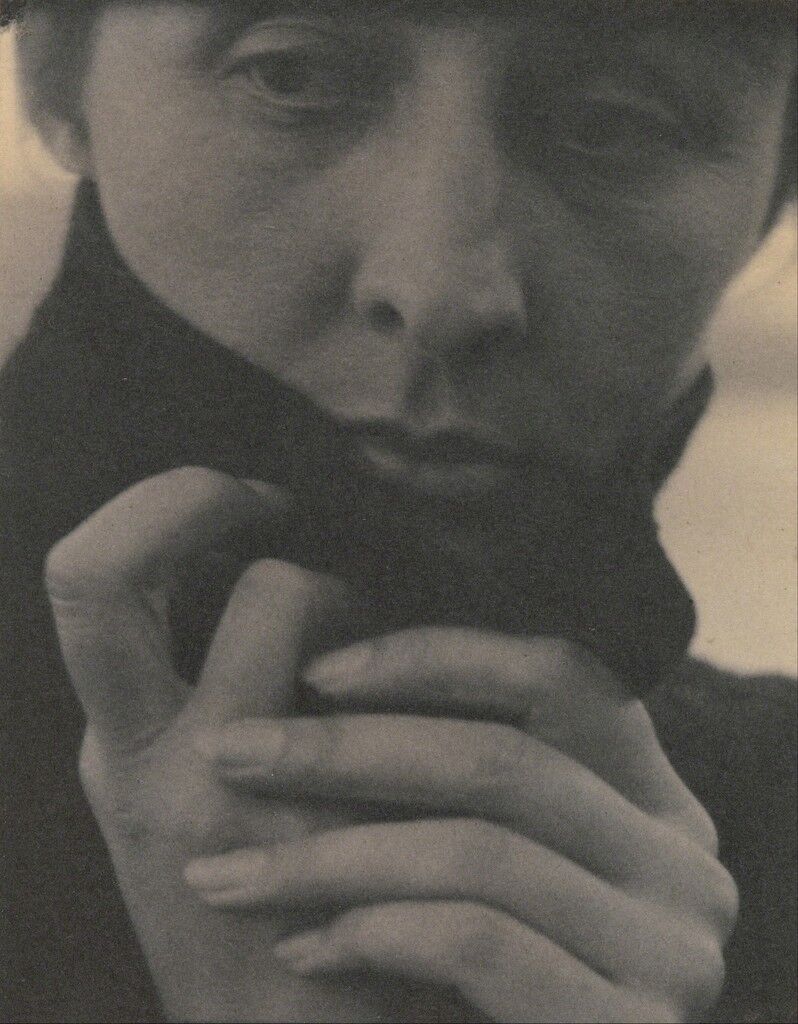 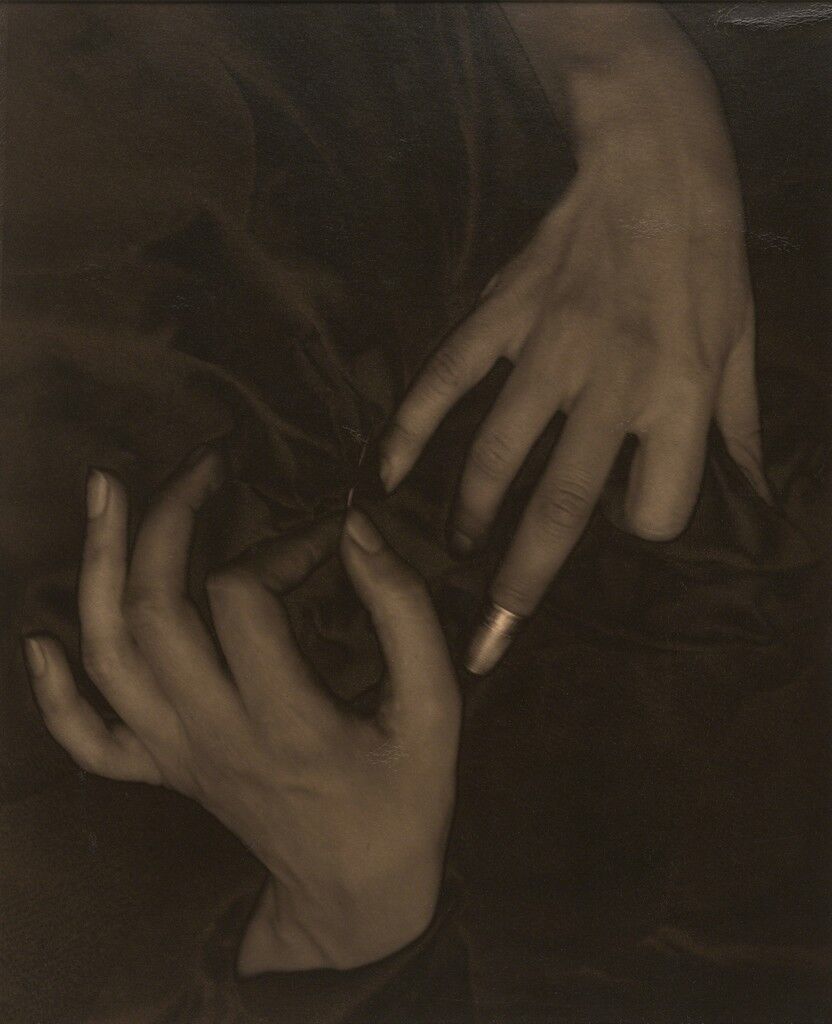 Alfred Stieglitz
Georgia O'Keeffe--Hands and Thimble, 1919
San Francisco Museum of Modern Art (SFMOMA)
While Stieglitz indeed deserves credit for jumpstarting O’Keeffe’s career, their relationship also hindered her self-expression. It was away from his influence that she created some of her most famous bodies of work, such as her paintings of cow skulls and her “Black Place” series (1936–49) of jagged, abstract landscapes. In 1929, O’Keeffe visited Taos, New Mexico, for the first time. She traveled back and forth between the Southwest and the East Coast—and around the world—before permanently settling in New Mexico in 1949. In the intervening years, she also maintained a close relationship with Salsbury (who’d left Strand by this time), eschewing romantic male company toward the end of her life.
Beyond a preoccupation with O’Keeffe’s sexuality, Stieglitz’s photographs also, more subtly, demonstrate a preoccupation with her skill. He obsessively photographed her hands, including one lovely picture, Georgia O’Keeffe—Hands and Thimble (1919), where they emerge from the top and bottom of the frame. She wears a thimble on her right middle finger, while her thumb and forefinger submerge into the folds of a dark cloth. With her left hand, she pinches her thumb and forefinger into a circle, wielding a thin needle that pokes into, then out of, the rippling material. If sexual innuendo still abounds in the image, it also celebrates the detail and delicacy of O’Keeffe’s thin, elegant fingers and their shapely nails—her own tools for creating and artmaking.
Alina Cohen
Related Stories 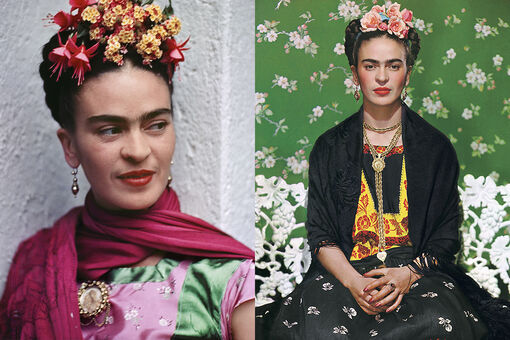